I put this one on my to-do list after reading posts about it in Off-trail Trip Reports by folks with lots of experience in the Gorge. It sounded like a real adventure hike and definitely a different way to reach Nesmith Point. Don pronounced it “doable”, but I had to see whether that applied to me. Also, if I managed to thrash my way through this one, I wanted to post a more complete record of the route and its idiosyncrasies. I started from the Nesmith Point TH (Yeon State Park) and headed east on the 400 trail, past Elowah Falls, 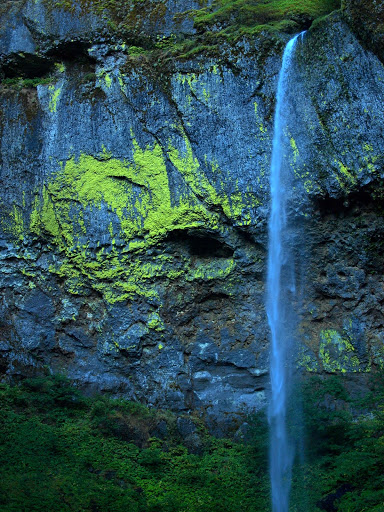 the new I-84 bridge at Moffett Creek (you’d think that ODOT could have spruced-up the 400 trail where it was impacted by the construction), 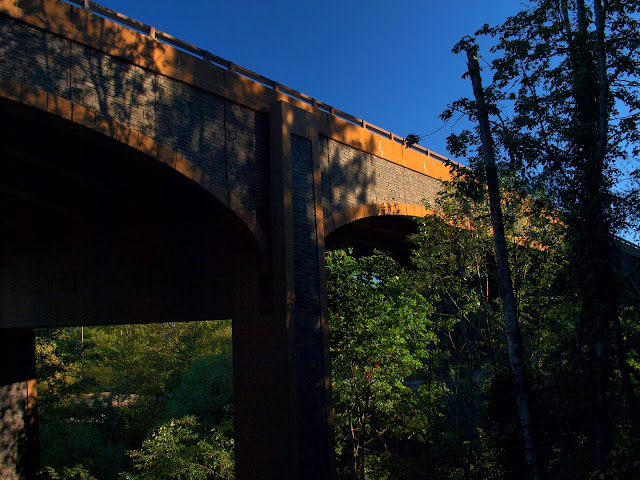 and then up toward Munra Point on the most unrelentingly steep section of the whole hike. 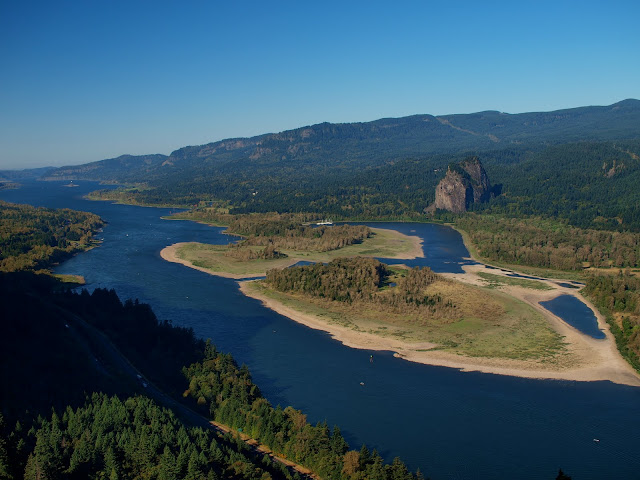 It was an absolutely bluebird day, all day – sunshine, light wind, moderate temperatures – when it’s a good day in Oregon, it’s a REALLY good day. From the Munra Point trail, I could see the upper part of Munra Ridge in the trees and one of the objectives, the power line road, way in the distance (the arrow shows where a power pylon is dimly visible). 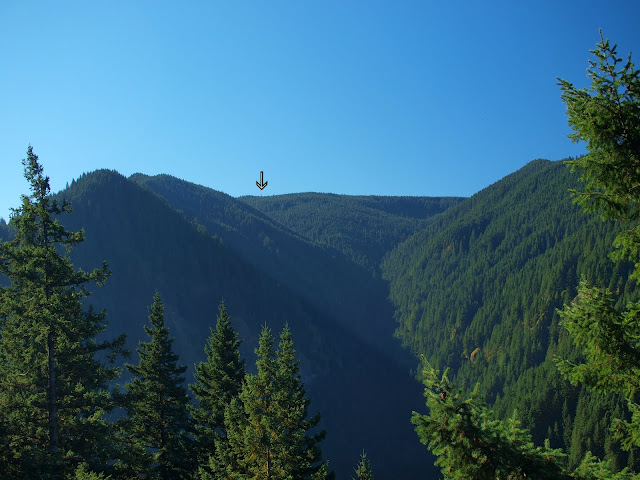 This is looking south along the ridge from Munra Point – the “Fin” is the first hump on the left and there’s a faint trail going around it to the right (W). 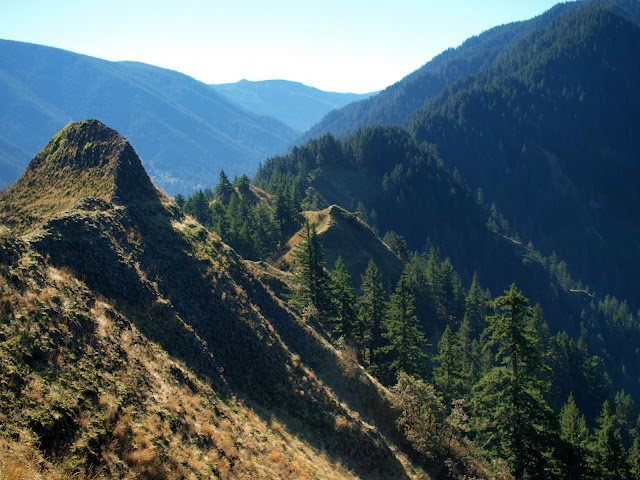 Why it’s a “fin” wasn’t clear until I got closer. 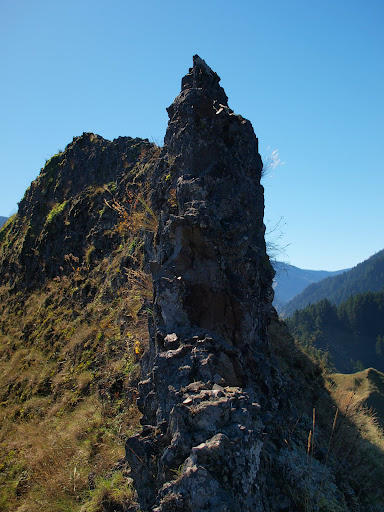 This is looking back (N) toward Munra Point, with the Fin close on the right. 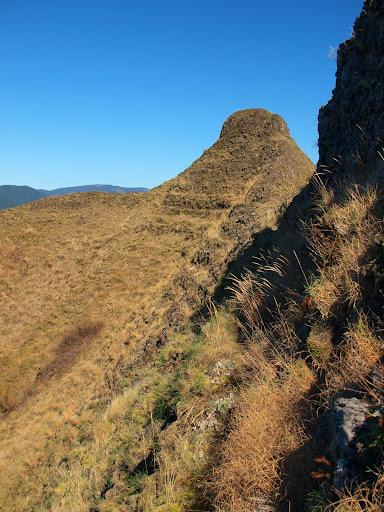 I had the impression that passing the Fin would be a problem but it wasn’t – the use trail is about 12-18” wide and easy to follow. Yes, there’s exposure, so under less than perfect conditions (i.e., wet or low visibility) it could be tricky. After the Fin the use trail goes over another large hump (the closest one – Munra Point is in the distance and the Fin is behind the large hump) and continues down the ridge. 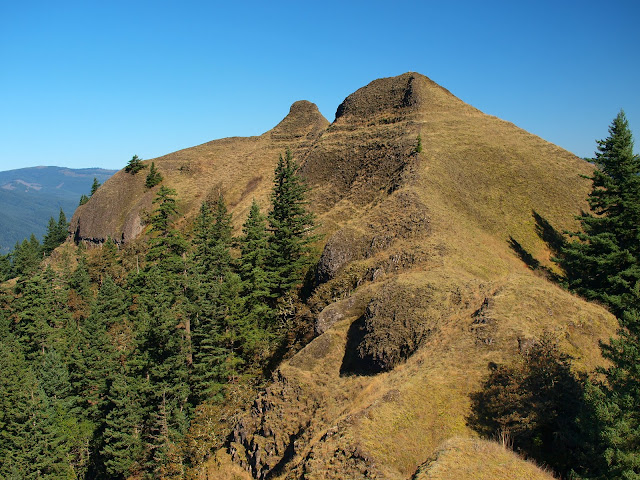 From the ridge, I had a great view of Adams in the distance and the Bridge of the Gods below. 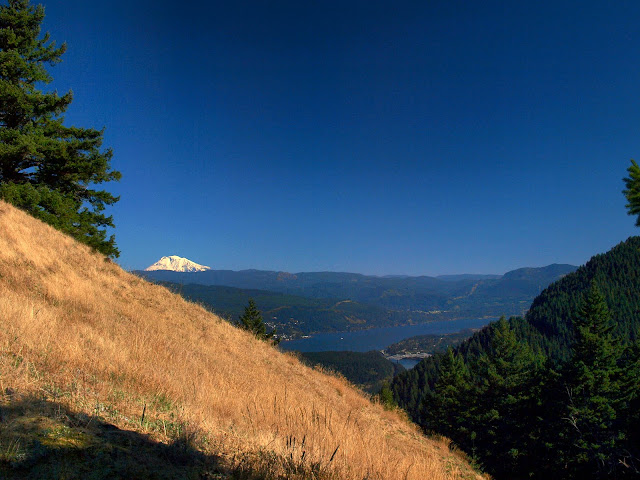 This was my last view of the grassy ridge before entering the forest. Within the forest, sometimes the use trail was readily apparent and at other times (particularly near the top of the ridge) it was very sketchy or non-existent. Many parts along here reminded me of sections of Ruckel Ridge. 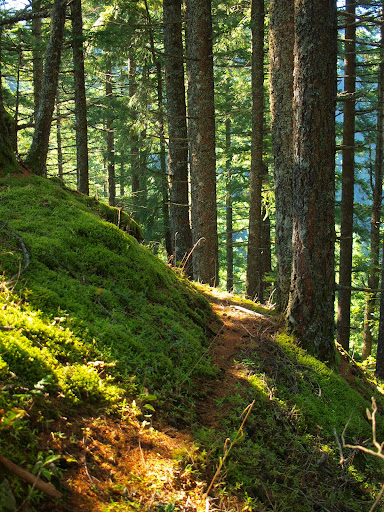 With one exception, I pretty much tried to stay either on or very near the top of the ridge. In many places there were trails that contoured around a seeming obstacle only to require a steep climb back up to the ridge later on. The one exception to “staying on the ridge” came at 2500’ (UTM 580952mE, 5050376mN), where the ridge makes a very steep 200’+ step composed of rock bands, loose moss, and looser dirt. Having thought that the main difficulties were back at the Fin, seeing this thing loom out of the trees was a bit of a surprise. This is looking down from on top. 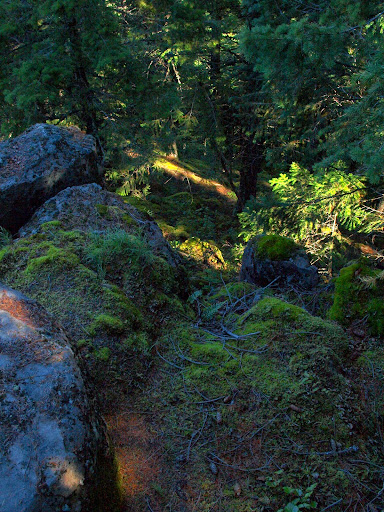 Others had reported traversing E or W around it. After first trying to climb directly up the prow of the ridge, several 3rd class moves and numerous “portable” (i.e., unattached) handholds composed of thick moss convinced me to contour E to a less steep use trail (reminiscent of the steeper parts of Rudolph Spur). After this, the ridge began to flatten and broaden and the trail largely disappeared (if there’s one at this point, I never found it). An occasional fungus relieved the forest gloom. 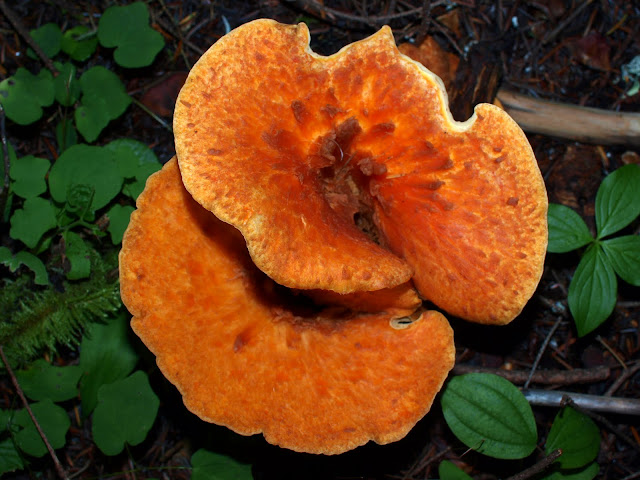 By keeping the drop-off into Tanner Creek close on my left, I was able to navigate through a bunch of brush, past Point 3096, to a welcome rendezvous with the BPA service road, 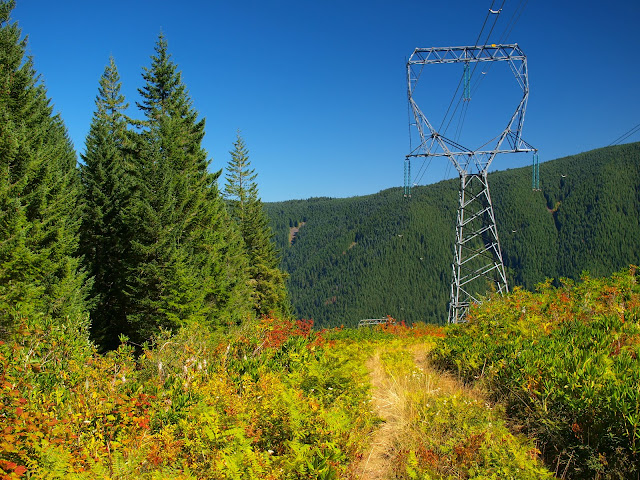 and a good view of Hood and Tanner Butte. 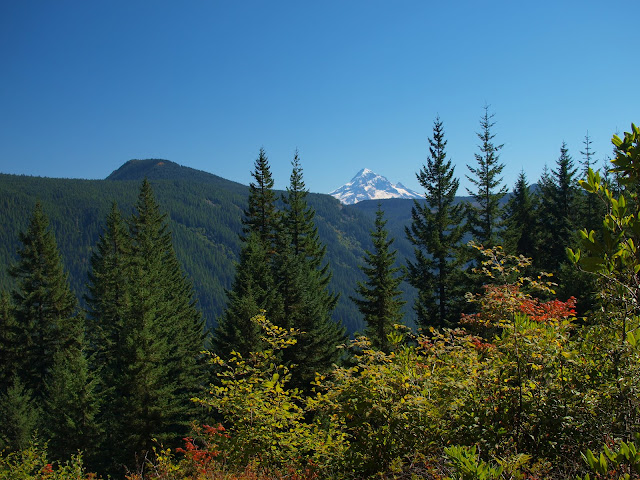 This officially ended the “adventure” portion of the hike, as all that remained was following power line service roads and trails back to Nesmith TH. It was about a mile down the service road 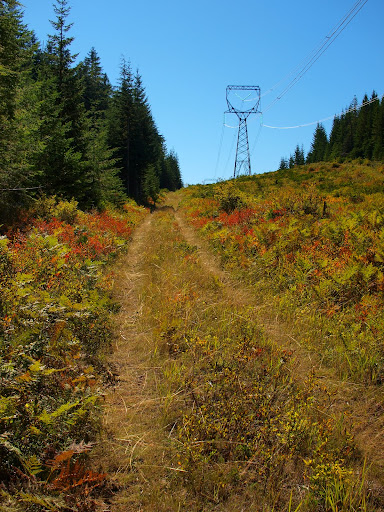 to its junction with the Moffett Creek Trail (#430) near a old sheet metal building – which I’d camped at during my Trans Gorge backpack earlier in the year. 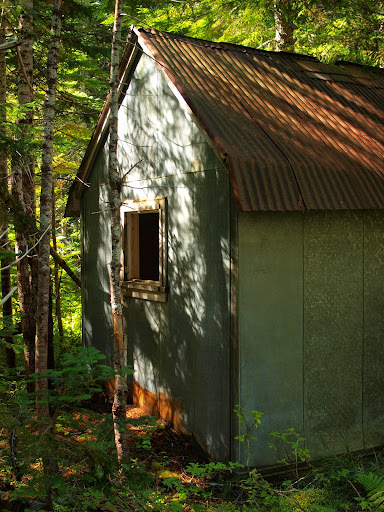 The Moffett Trail is still scruffy but it’s now sporting at least one very aesthetic new bridge, thanks, I believe, to the Mazamas. It would be great if the trail itself was a nice as this bridge. But, because I’ve used this trail, that’s probably self-interest speaking. I think the Moffett suffers largely because it doesn’t go anywhere that a meaningful number of hikers want to go, so it gets little love and support. 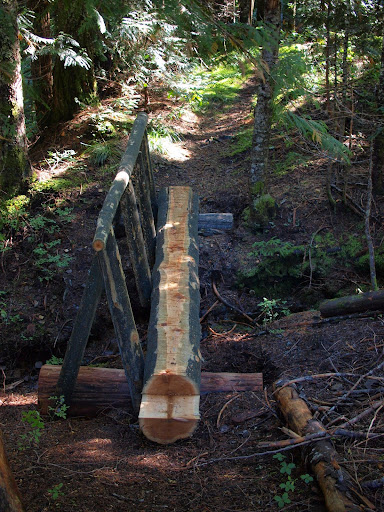 After that, the Moffett gets vague as it crosses under the power lines I’d followed up from Munra Ridge, 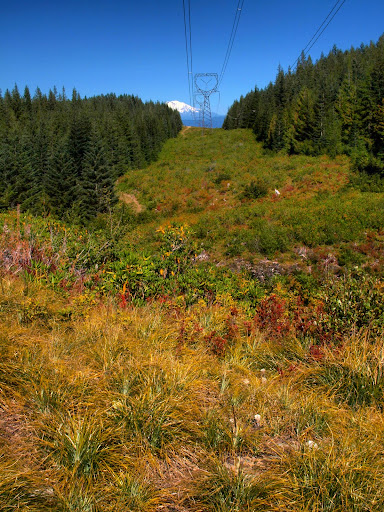 then heads down and across McCord Creek, 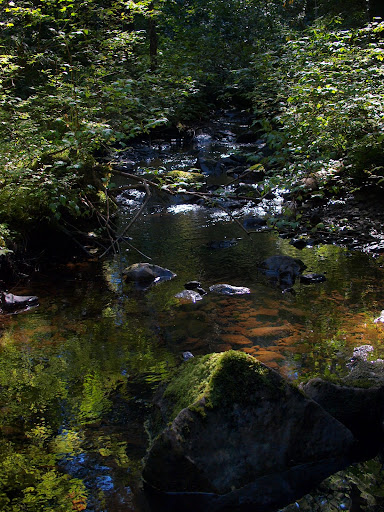 before climbing up (ack!) to meet the Nesmith Road, which was bordered by vegetation in varying stages of Fall colors. 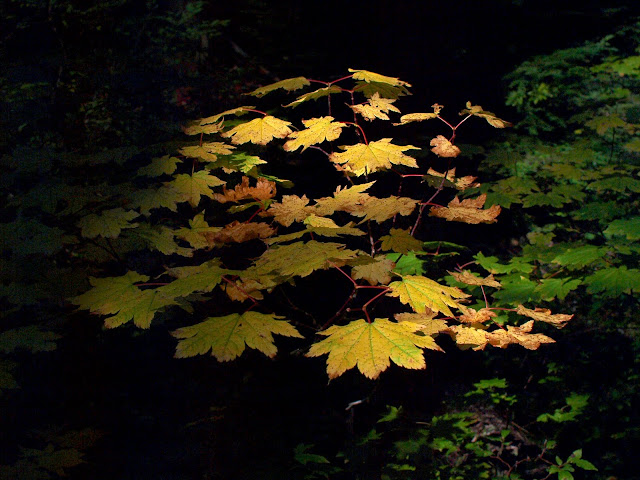 I headed up to Nesmith Point, got a look at the view, 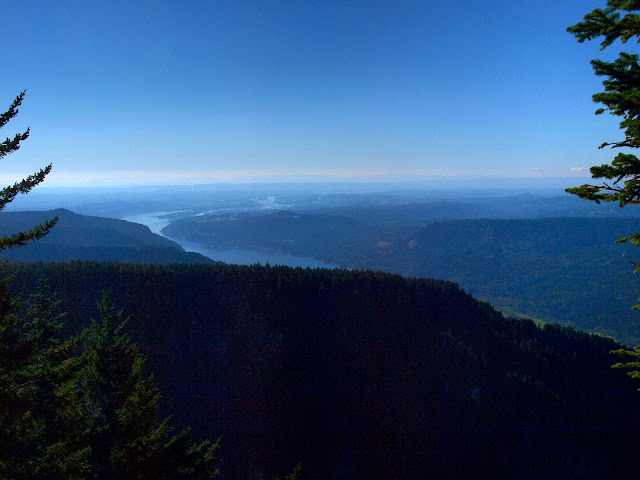 and then headed directly down NE cross-country to intersect with the Nesmith trail at around 2800’, and hence back to the car. I only saw 5 people the whole day – 1 guy descending from Munra Point and 4 folks well up the Nesmith trail who asked me “How far to Elowah Falls?”

By my back-of-the-map calculations, this hike was approximately 12 mi with 4100’ gain and should have taken me 6 hr or less (I'm committed to 2 mi/h regardless of elevation gain, weather, trail conditions, or my mental state). But, what with the route finding, brush thrashing, and general grasping of loose moss, it took me 8 hours. But it was a LOT of fun and one I’d recommended for those wanting a full plate of the various hiking challenges offered in the Gorge. I would not recommended trying this – particularly the crux at 2500’ – in wet weather as there are places where a slip could have pretty severe consequences.
Last edited by VanMarmot on October 1st, 2010, 5:30 am, edited 1 time in total.
Top

Yup, the "fin" shots officially triggered my vertigo gene, Van... yowsa! Where are the hand-cables... not to mention the circus net, below..?

I haven't seen post from Don for some time what gives?
Shoe Shine Boy Has Left The Building!
Top

Splintercat wrote:Yup, the "fin" shots officially triggered my vertigo gene, Van... yowsa! Where are the hand-cables... not to mention the circus net, below..?

definitely, me too, and when you mentioned 'Ruckel Ridge' I almost fainted. Just seeing pictures of Ruckel Ridge (and this hike) gives me pause.

I just went back and scanned your narrative - was it mostly 'walking' or did you end up doing any scrambling on all fours, or climbing, on the ridges? Just wondering how technical that was...
Jim's Hikes

Crusak wrote: I just went back and scanned your narrative - was it mostly 'walking' or did you end up doing any scrambling on all fours, or climbing, on the ridges? Just wondering how technical that was...

None of it was technical, 99% just walking & solid route finding. By-passing the Fin just requires staying focused on where you put your feet. Getting around the step at 2500' can be done by going around to the left (E) side and following some faint use trails up that side of the ridge - it's as steep as parts of Rudolph Spur but not as exposed as back by the Fin. There is also supposed to be a way around the right (W) side too. I suppose you could go directly up the prow - as I started to do - but that might easily get into loose 3rd/4th class - something that isn't really necessary to get past this obstacle. As I said, this is probably not a hike done in less than good/perfect weather.
Last edited by VanMarmot on September 26th, 2010, 2:37 pm, edited 1 time in total.
Top

I haven't seen post from Don for some time what gives?

Thanks. I understand that Don's been recovering from back surgery for awhile but expects to be back in full action by October.
Top

I haven't seen post from Don for some time what gives?

Thanks. I understand that Don's been recovering from back surgery for awhile but expects to be back in full action by October.

any chance you have a gps track of the path? munra is one of my favorites in the gorge and i have always toyed with trying to make the loop you described. however, i worry i will get lost back there :>

mexi pete wrote:any chance you have a gps track of the path? munra is one of my favorites in the gorge and i have always toyed with trying to make the loop you described. however, i worry i will get lost back there :>


Sorry, I don't. My efforts to save up for a really good GPS haven't been successful so far. And the GPS I have doesn't like tree cover. However, if you stay on or near the ridge, routefinding is pretty straight forward until just before Point 3096, where the ridge flattens out. But if you stay left (E) along where the ridge drops off into Tanner Creek you'll run into the service road.
Top

mexi pete wrote:any chance you have a gps track of the path? munra is one of my favorites in the gorge and i have always toyed with trying to make the loop you described. however, i worry i will get lost back there :>


Here is a screen shot of the route: I could also send you the file in .tpo format but you will need National Geo TOPO software to read it and upload the data points to your GPS unit.