When Greg and I saw a recent report for Spray Park, we decided not to head to Hood for the weekend and headed for Mt. Rainier instead. Because I was unable to get off work early, we didn’t get out of town until after 6:30. We stayed in a hotel in Puyallup Friday night and got up nice and early for the drive out to the Mowich Lake trailhead Saturday morning.

There were so many cars that we had to park about a quarter mile from the trailhead (when we left that afternoon, cars were parked along the dusty road for a full mile). Oh, and word to the wise: the trails going down the hill to the lake are not the trails you are looking for. Walk all the way to the end of the road to find the trail for Spray Park. The trailhead was a zoo. We had to wait in line for the toilets for almost ten minutes. I’ve been to some busy trails before, but this was nuts. Fortunately once we got hiking, the crowds thinned out a lot, at least for awhile.

We took the side trail to Spray Falls and WOW! How did I not know about this waterfall? It is enormous and beautiful! It’s like Ramona Falls on steroids. 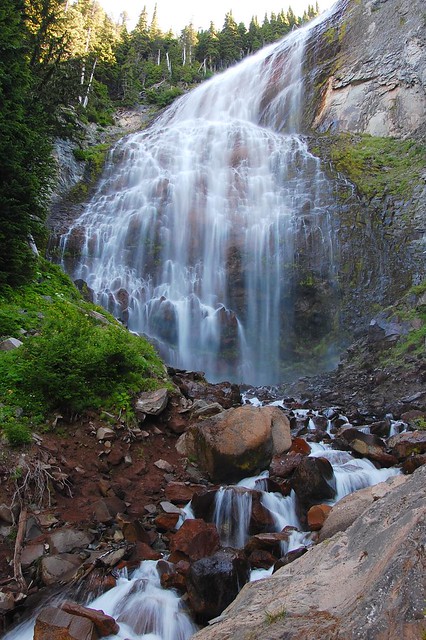 The best vantage point is on the other side of Spray Creek, so we found a way across and took some pictures. Neither of us had brought our tripods since it was a sunny day, not expecting that the waterfall would be in total shadow. We did our best with steadying rocks and hand-holding. Getting a shot without people in it was the most challenging part. People were clambering all over the hillside on both sides of the creek.

Back on the main trail, it started to climb steeply after Spray Falls. And the trail is quite rocky and rooty too. Oh, and it was a hot day to boot. But we eventually emerged from the trees into the meadows of Spray Park, with massive Mt. Rainier looming over us. 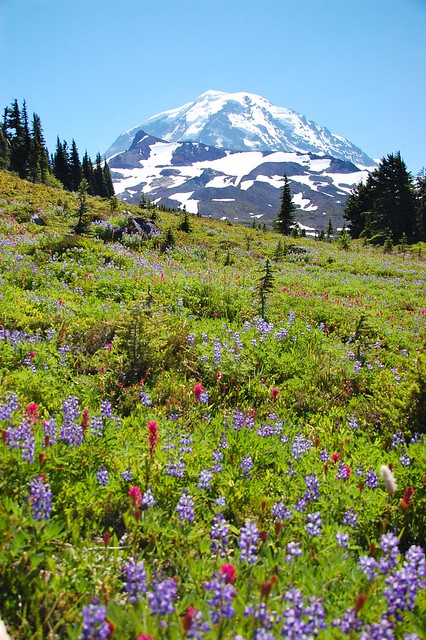 The wildflowers were pretty damn awesome. Lupine, oh so much lupine! 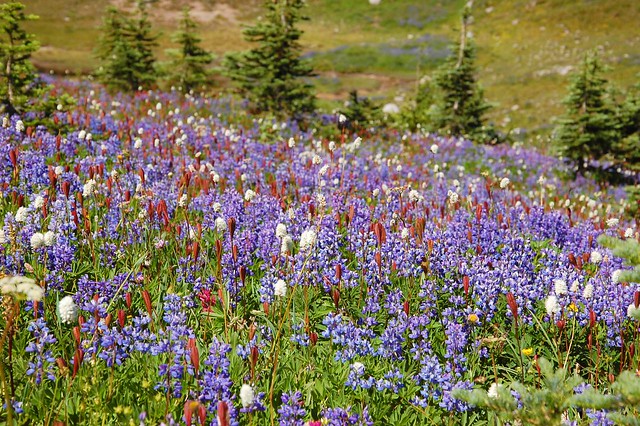 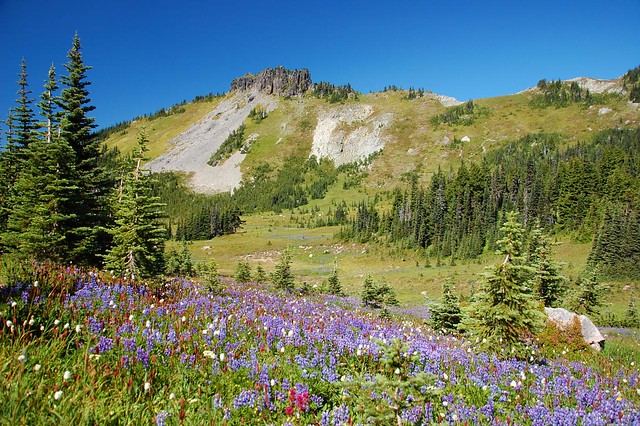 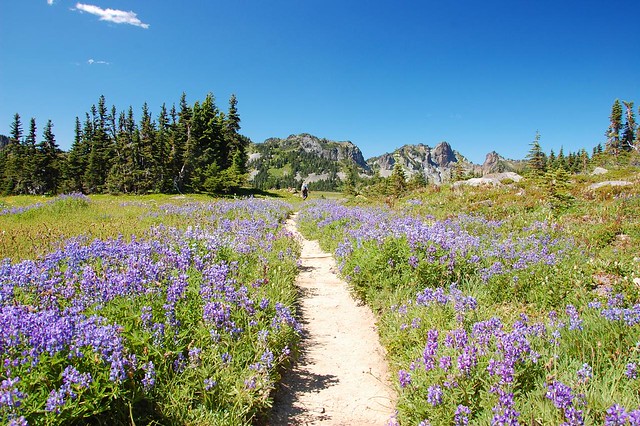 We saw a marmot, who was later joined by a buddy. Their presence 10 feet off the trail caused a hiker traffic jam. I should have taken a picture of that! 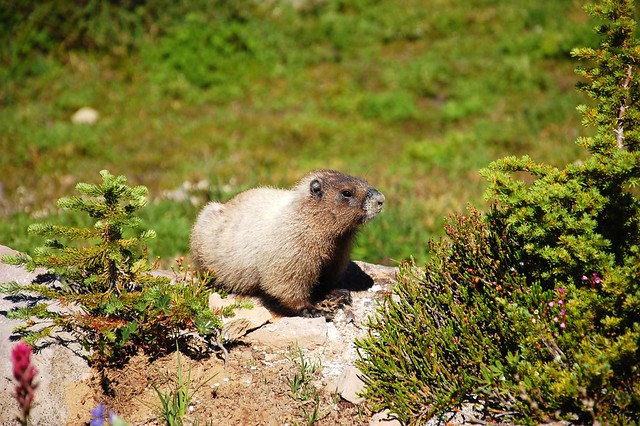 We walked uphill through Spray Park for a mile to the other side, then climbed up a steep side trail towards Echo Rock where we rested and admired the views of Spray Park below us, Mt. Rainier above us, Mother Mountain beyond Spray Park, and other Cascade mountains to the north. 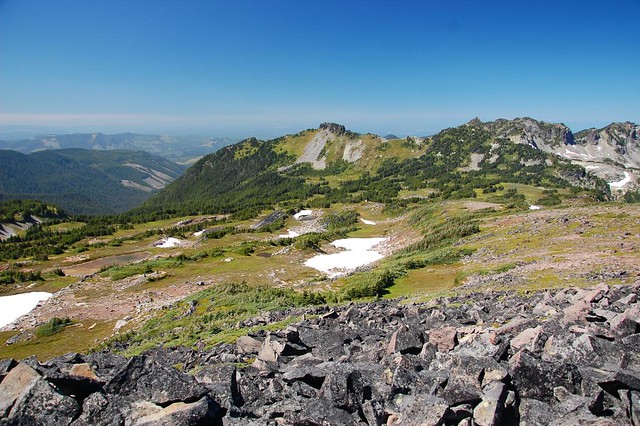 Mother Mountain in the foreground and the Cascades beyond: 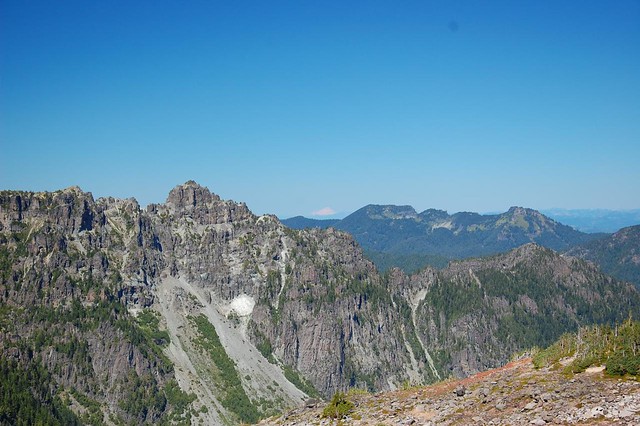 And of course Rainier: 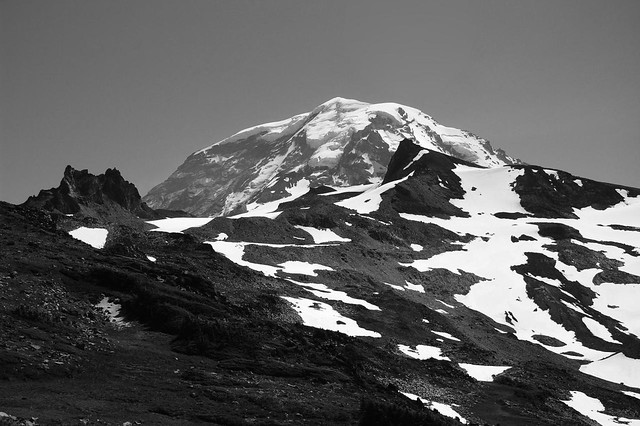 The mid-day light wasn't very good for photos that had Rainier as the backdrop, but we made the best of it. 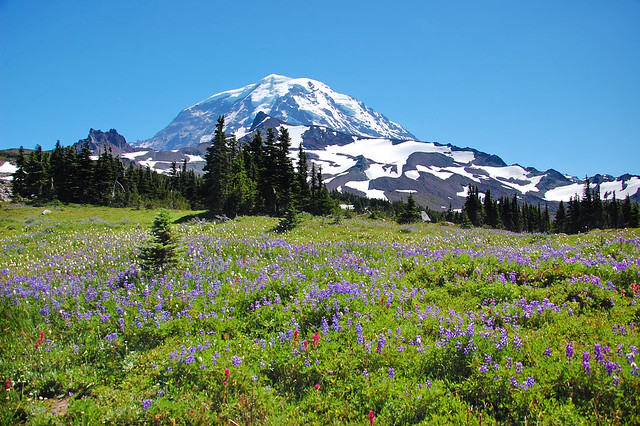 The day was sunny and HOT. I'm sure it was worse back here in Portland; we were probably in the mid 80s up there. Heading back into the cool forest on our return was nice. We think we did about nine miles total.

As we all know, wildflowers and mosquitoes peak at the same time and there were plenty of the awful buggers at Spray Park. There were also LOTS of people. The combination of a no-fee weekend and beautiful weather and the peak of wildflowers probably made for even worse crowds than normal. Unfortunately, despite the abundant signs telling people to stay on trail, we saw people going off-trail and using side trails that were clearly marked as "stay off, we’re trying to restore this area, dammit". Sigh.

This is a very beautiful hike during wildflower season, but I've heard from veterans of this trail that it's actually a mediocre year for the wildflowers there. If this is a mediocre year, I'd love to see a good year!
Top

fantastic pictures Cheryl! Spray Park is heaven on earth, thanks for sharing.
"Man who catch fly with chopstick accomplish anything" - Mr Miyagi
Top

Very pretty! I used to hate wildflowers (not sure why?? just didn't think they were cool?) either way, after visiting Rainier in August one year and seeing and smelling the flowers, I've been forever changed! Spray Park is beautiful (and not crowded!)
Tyler Mode
http://www.naturespixpdx.com
Top

Its hard to say whether this is a mediocre year or the flowers are just slow to bloom. There are patches of REALLY thick, really abundant Lupine up there right now, but there are other sections where it hasn't bloomed at all and yet others that are already wilted. Most of the other types of flowers simply haven't shown up at all yet, which makes me think everything is just late this year. Of course, it may just end up being one of those off-years.
Bryan Swan
Northwest Waterfall Survey
Photography Portfolio
Top

Wow, these are beautiful photos!
Top

justpeachy wrote: The day was sunny and HOT. I'm sure it was worse back here in Portland; we were probably in the mid 80s up there. Heading back into the cool forest on our return was nice. We think we did about nine miles total.

Wish it were that cool here in Florida right now!