So Sunday we set out on a mission to Celebrate 2 Birthdays, Chiyoko's & the centennial anniversary of the inscription on the Hiroshima Rock (Dated July 17th 2010) Yes we were a day late for the Rock but it didn't complain.

Chiyoko hadn't been here before & I was hoping that she was going to be able to translate the kanji on the other side of the Rock that we hadn't yet translated. Here is a pic from last October's climb, you will see why I'm using this one a little later in the report! We took the ridge route all the way from Cloudcap this provides some great views along the way, though at times it's a bit steep especially if like us you leave it a little too late to cross over onto the Cooper Spur Ridge The place was quite busy which was surprising considering that virtually all the switchback trail to the top was snow covered leaving the ridge route as the only option with one small snow field to cross just below the Summit. 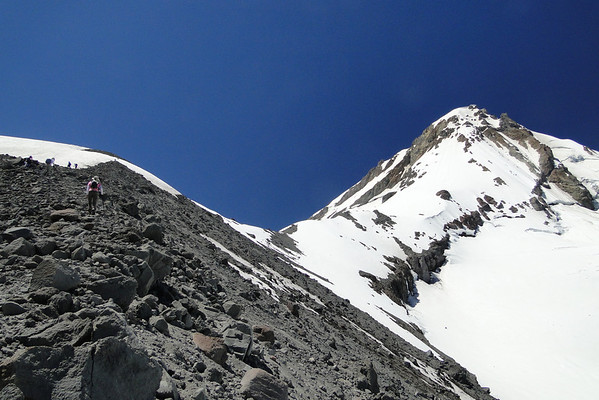 First order of business once we reached the top was to unpack the Surprise bottle of Champage (on ice), Birthday Cake & assorted glasses, plates, forks & candles etc & lugged up in my pack. A Birthday Wish I wonder? "Hmmmm A little less hiking would be nice"

The Rock which was only just emerging from the snow had to make do with the empty bottle. We can safely say that there is more snow on the Mountain this July than there was in July 1910! We put Chiyoko & Kazuko to work translating the other side of the Rock & by wetting the rock they were able to make out the fading Kanji. So the Left side of the Rock reads Mie Ken Jin - Ito (Person from Mie State, [Mr.] Ito)

We thought we had hit pay dirt when an internet search of Japanese websites turned up a Mr. S. Takahashi (Japanese Banker) who while working in America climbed several American peaks including Hood. Unfortunately it then said that he didn't come to the states until 1915 so the search for the origins of these inscriptions continues!

The weather was great & we hung out for a longtime on top enjoying the views before returning by way of the snow fields to the Timberline trail a little East of the Cloud Cap Shelter. We made a quick stop at the shelter before heading back down to Cloudcap. Whenever I get home & look at my photos from a day around Cloudcap & Cooper Spur I'm always struck by the lack of green but there is a stark barren beauty to this side of the mountain that I never tire of! Very nice report, Guy. What a cool thing to have to look forward to, the translating of Kangi on a rock up in the snow!
Clackamas River Waterfall Project - 95 Documented, 18 to go.
Top

Good weather, good company, beautiful spot and a historic mission. You guys had your cake and ate it to

"A little less hiking" I think I have herd that wish before.

Tom
The downhill of the mind is harder than the uphill of the body. - Yuichiro Miura
Top

Wonderful! Thanks for posting, Guy -- and thanks for pushing your way up there for the centennial..! Great photos and report. If you don't mind, I'd like to put a link to your report from this blog article that I posted over the weekend, and also to quote your translation of the inscription.

Wonderful! Thanks for posting, Guy -- and thanks for pushing your way up there for the centennial..! Great photos and report. If you don't mind, I'd like to put a link to your report from this blog article that I posted over the weekend, and also to quote your translation of the inscription.

Tom, you are more than welcome to link to the post & info. I enjoyed your blog post, now we have a translation for the other side of the rock I'm hoping something might turn up using those as key search words.

About climbing in Japan I was lucky enough to climb Mt. Fuji in 2007, Totally different experience from climbing a NW Mountain, masses of people climbing the mountain almost like a long line of ants hoping to arrive at the top before sunrise. Most of these people are not regular climbers or hikers or even outdoor people but they all have a calling to climb Fuji San at least once. It was a great experience to be apart of.

Oh & Chiyoko's Birthday was the 18th which is why we were a day late for the rock!
hiking log & photos.
Ad monte summa aut mors
Top

Thanks, Guy. That's pretty close for Chiyoko..! Great that you were able to go up there and celebrate both birthdays in this way!

I've seen photos from modern Fuji trips, and when I see the statistic that Mount Hood is "thought to be the second most-climbed snow peak in the world, after Mount Fuji", it strikes me that Mount Hood will NEVER see enough climbers to move into the number one spot...!