I had two days off mid-week – days that (finally) coincided with summer weather - and decided to do an overnight hike from Angels Rest to Tanner Butte. I wanted to try out some new gear and also check the state of the Moffett Creek trail. Yes, this was the long way to check a trail but why not? My wife dropped me off at the Angels Rest TH under warm and welcoming skies, 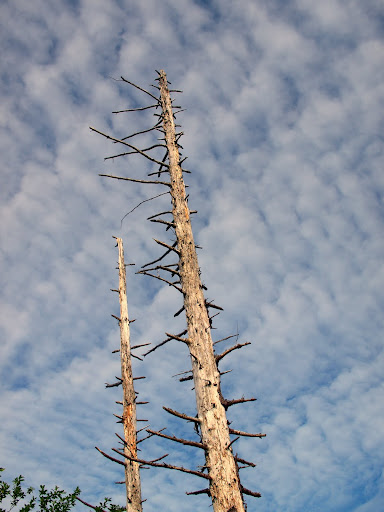 and I was soon passing Angels Rest, 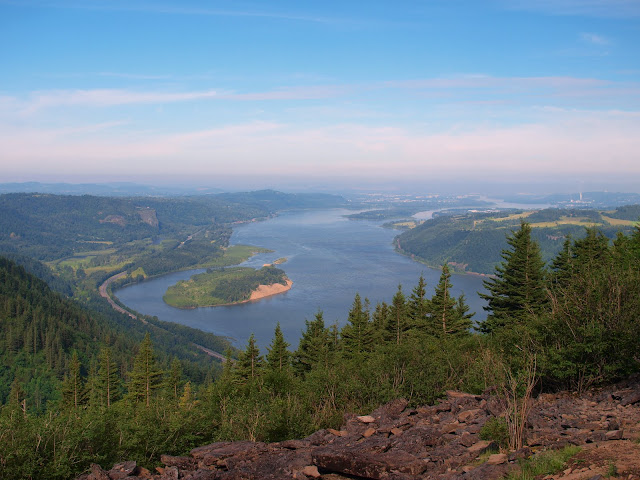 and heading E on the 415 & 420 trails to Multnomah Creek and then up Franklin Ridge to the Bell Creek Trail. I had done this trail a few weeks ago but was surprised by how much dense, lush vegetation had grown up over it since then. 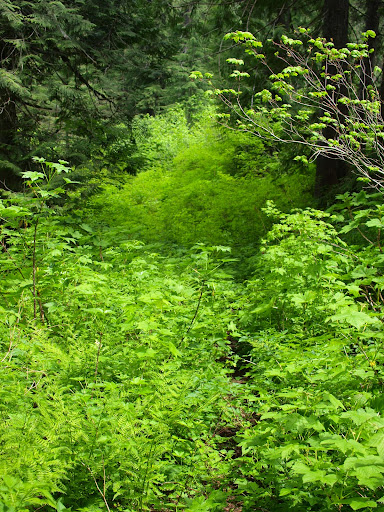 Most of the really wet parts of the trail had dried out and there’s no longer a stream running along it at its eastern end. From there, I continued heading E on the Horsetail Creek Trail toward Nesmith Point. There’s an old campsite above the middle fork of Horsetail Creek and I considered stopping there, but the day was still young so I pressed on. There are a couple of excellent viewpoints along the Horse Creek trail, between Yeon Mtn and Nesmith Point, so I got a view of Adams with thunderheads brewing. 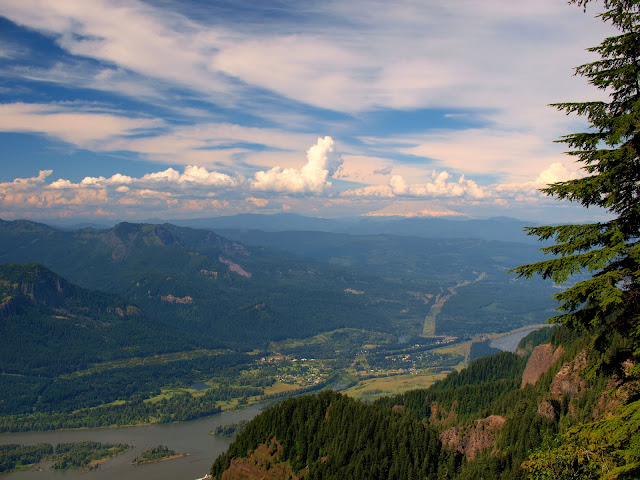 Once the Horse Creek trail met the old road leading to Nesmith Point, I jogged south along the road to join my nominal “goal” - the Moffett Creek Trail (#430) and continued E on it. It’s very distinct and easy to follow until it reaches some powerline service roads in about 2.5 miles. A lack of signage, odd intersections with these roads, and a deterioration in the quality of the tread meant greater vigilence until I reached this forlorn and tattered little sign. 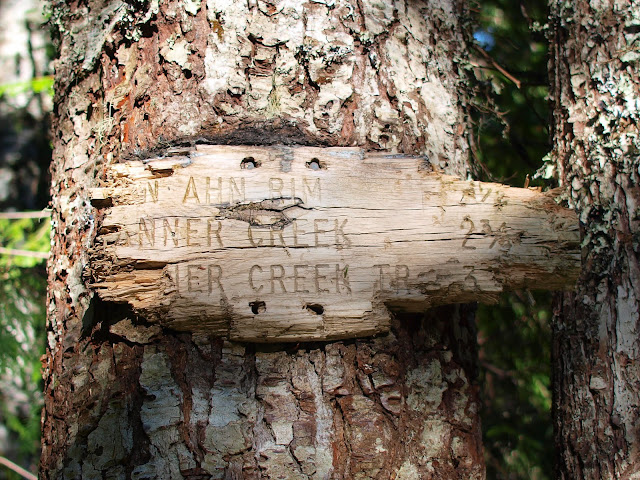 I didn’t know it then but the condition of this sign is a metaphor for the condition of the trail behind it. I went in search of Von Ahn Rim Camp but it was a no show. I did find a pond, now filled beyond capacity by the recent rains, and hosting substantial numbers of blood-crazed mosquitoes. 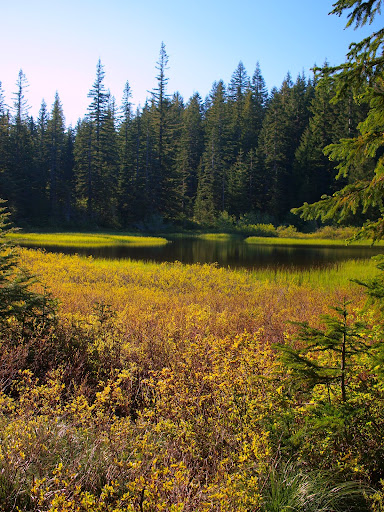 As much as I would have liked to have found the Rim Camp and camped near the pond, the clouds of mosquitoes pushed me back to a camp on one of the roads where there were somewhat fewer buzzing insects.

The next morning, I continued E on the Moffett trail, which, in many, many places, is little more than a glorified game trail. It’s not too hard to follow but you have to pay close attention. I remember reading a while back that it had been reopened or restored but any such efforts weren’t apparent. About a quarter mile past the pond, the trail suddenly opened to a view of Tanner Butte and Hood (and no clouds!). 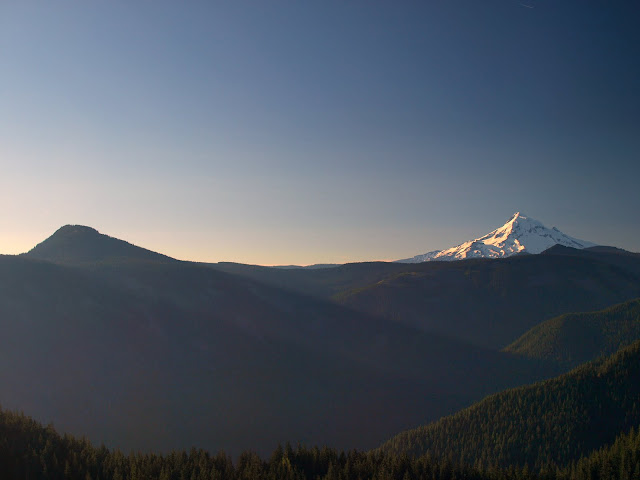 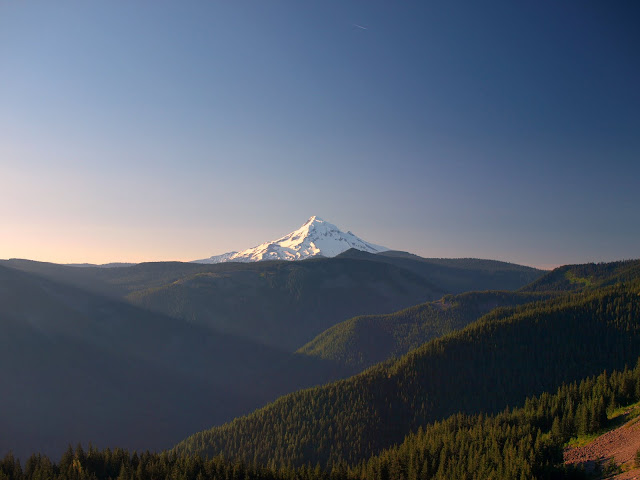 After this viewpoint, the trail passes a relatively new wilderness boundary sign (on a trail with otherwise minimal signage!), and starts dropping toward Tanner Creek - with its quality now ranging from game trail to not bad. There was a lot of overgrowth and some spots where a section of the trail had been removed by falling trees or small landslides. 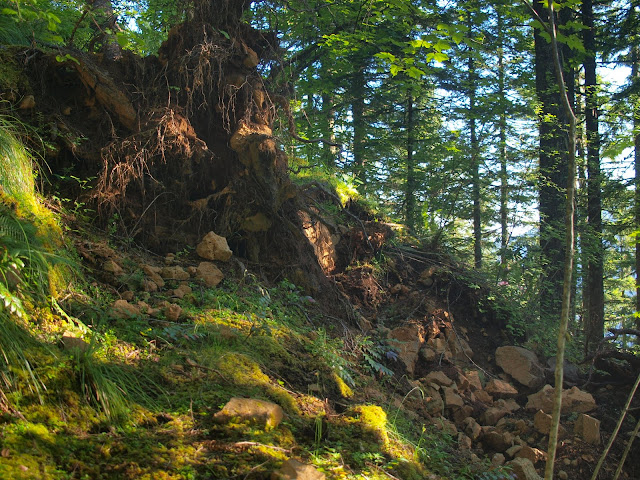 Still it wasn’t hard to follow if I concentrated. The worst part was just before reaching Tanner Creek where the trail cuts through much more vegetation – and lots of Devils Club. Since there’s no official bridge over Tanner Creek, I descended in the sincere hope that I would be able to find a way across the creek and wouldn’t have to climb back up the Moffett. When I reached the creek, it wasn’t running as high and fast as recent rains might suggest but still seemed too much for wading particularly given that the rocks were slicker than glass with wet algae. 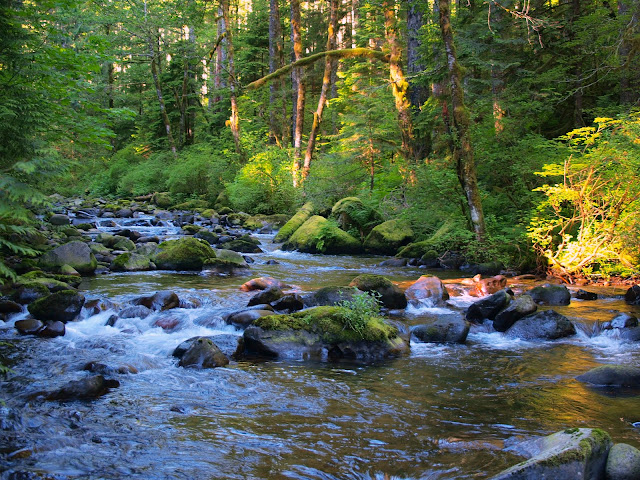 I was greatly relieved, therefore, to see a log crossing about 200’ downstream. 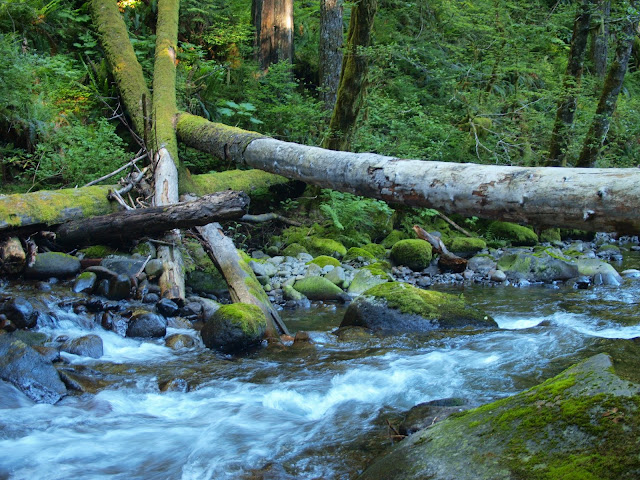 I tried to reach the log along the edge of the creek but the rocks were too treacherous, so it was back into and through the stream-side vegetation – with yet more Devils Club. After shimmying across the log, I thrashed up to the Tanner Creek Trail (#431). This trail proved to be wet, overgrown, damaged in spots, and in need to maintenance. This log bridge had a curiously spongy texture which was not reassuring. 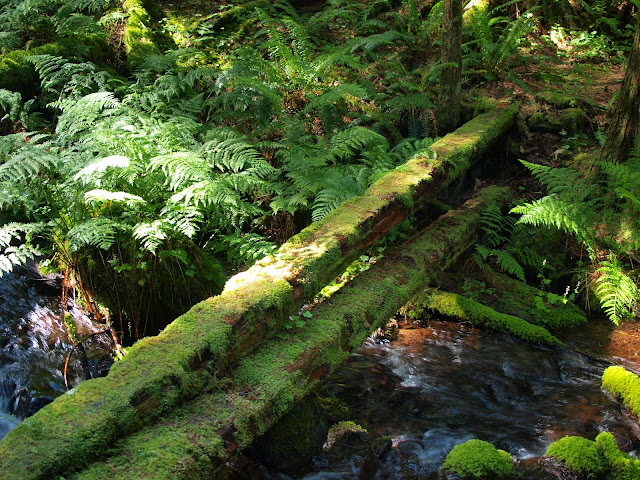 I took the #431 N to the Tanner Cutoff Trail (#448) and followed it up to the Tanner Butte Trail (#401). The Moffett and Tanner Creek trails made the #448 look like a major highway. Except for having to pay close attention for the first ¼ mile after it left #431, it presented no real route finding issues. Some very nice person had even gone to the trouble of cutting away a blowdown that had been blocking the trail about halfway up – what a relief not to have to crawl! Once up on the ridge, I found a nice spot in the sun and took a nap – yes, it really is summer. After that it was down the Tanner Butte Trail, which looked amazingly wide and open compared to the trails since Bell Creek, toward home, and a cold Abita Turbodog beer.

Looking at a map, it’s easy to see that the Moffett, Tanner Creek, and Tanner Cutoff trail system is the only way to traverse the Columbia Wilderness between Nesmith Point and Tanner Butte on trails and within the wilderness. While I understand that the Moffett doesn’t necessarily go where a lot of people want to go (and no reliable bridge across Tanner Creek is a major issue), I worry that this route will just fade away from lack of use and the maintenance that use encourages. Hiking from one end of the Gorge to the other may not be for everyone, but if the Moffett goes, that would become a moot point.
Last edited by VanMarmot on June 25th, 2010, 12:32 pm, edited 3 times in total.
Top

excellent report. I tried this same traverse at the end of May, in wet conditions all day, and had to bail out at Nesmith. Was the Bell Cr Trail still flooded out in long sections? Mouth-watering pics of Hood and Tanner Butte, wow!
"Man who catch fly with chopstick accomplish anything" - Mr Miyagi
Top

GREAT report and photos! The early morning shots of Hood from Van Ahn Rim are really beautiful -- hopefully, the mosquitos were just enjoying the view at that point, as well...

I couldn't agree more on the condition of the trails, and in fact, just posted a sizable blog proposal on the subject.. I don't think it's lack of interest in the trails as much as just being very unfriendly to all but the most experienced hikers. It would make for a terrific backpack experience with some basic maintenance, and a few trail projects here and there.

The pond photo was also stunning, BTW -- mosquitos too small to register in the image... just barely...

cascadehiker wrote:excellent report. I tried this same traverse at the end of May, in wet conditions all day, and had to bail out at Nesmith. Was the Bell Cr Trail still flooded out in long sections? Mouth-watering pics of Hood and Tanner Butte, wow!

Thanks. The Bell Creek trail is largely dry now - the parts that were part stream, part lake just a few weeks ago are now just dry rocky trail.
Top

Ahhhh, I'm so jealous! That looked like an amazing hike. Tanner is one of my favorites but I haven't been up there in a while. A couple years ago, I placed a geocache on the trail but then it was never "approved." Afterwards, I had an accident in which my knee was destroyed and haven't been back up there to retrieve it. I plan on getting it back this summer, I hope it's still there! Anyways, thanks for the pics, makes me want to do that hike sooner than planned!
A man is defined by his actions in life and by the well being of those directly effected by these actions.
Top

Splintercat wrote:I couldn't agree more on the condition of the trails, and in fact, just posted a sizable blog proposal on the subject.. I don't think it's lack of interest in the trails as much as just being very unfriendly to all but the most experienced hikers. It would make for a terrific backpack experience with some basic maintenance, and a few trail projects here and there.

Your proposal for the Hatfield Trail is great! Connecting from Tanner Spring to the PCT would give you some amazing views of the Eagle drainage - ones not obtainable once you're in it. It would also give PCT hikers another option for reaching Cascade Locks. But since you'd be dealing with the USFS bureaucracy (and probably that of the Bureau of Water as well) right now I'd settle for designating the trail along the existing Eagle-Tanner and getting some trail maintenance done (and maybe a bridge or two?).
Top

Great report and even better pictures. On Wednesday, 6/23, we went up Munra and continued up the ridge to intersect with the powerlines and then took Moffett Creek Trail over to Nesmith and down. So we were at the BPA Metal Shed for a while but the bugs started in earnest and it was getting late. I totally agree that the Moffett Creek Trail needs some work - not too much to keep it in shape. I assume it would be less-used going down to Tanner Creek and your report sure shows that it was. Anyway, it was a beautiful day and nice hiking weather for the explorations. Glad to know others were out. BTW, we ran into a hiker near Nesmith Point who was doing the same route and more but I think he must have been about a day behind you.
Top

Thank you for posting such a great report. I'll have to save this information. This strikes me as a very tempting overnighter some day.
Top

Me too, me too

Nice report and excellent photos - I especially like the ones in the early morning light!