I was looking for a hike on the sunny side of the Gorge, with not too much gain but with a view, and one that I hadn’t hiked before. Trolling through Afoot & Afield Portland, I came across the Sedum Ridge-PCT loop hike, with a side trip to Mowich Butte for the views. I dutifully followed the driving directions to the Sedum Ridge TH, only to find that I couldn’t find it! The promised “inconspicuous” trail sign was nowhere in sight and what trail I could find was in sad shape and disappeared into blowdown a couple of hundred feet from the road. Plan B became continuing on to where the PCT crosses Road CG 2070 – there’s decent but limited parking - and then taking the PCT north toward the Butte. From CG 2070, I followed the PCT along the North Fork of Rock Creek, 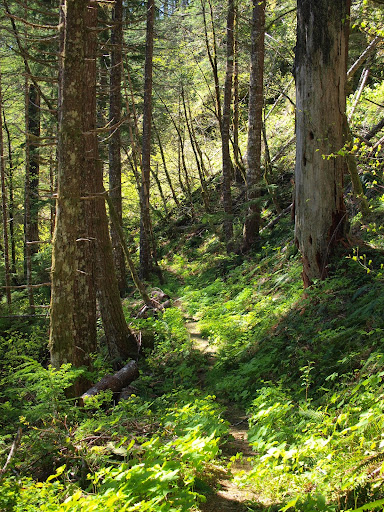 past at least two large waterfalls. This one was interesting because the water drops vertically over the edge of a rock shelf. 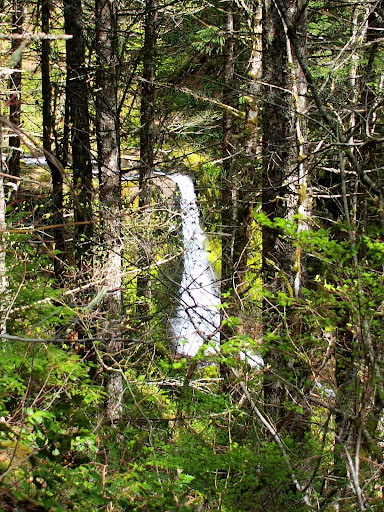 There were some – but not many - flowers showing, 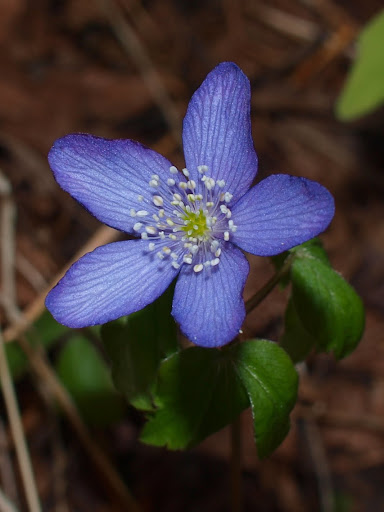 as well as some insect life. 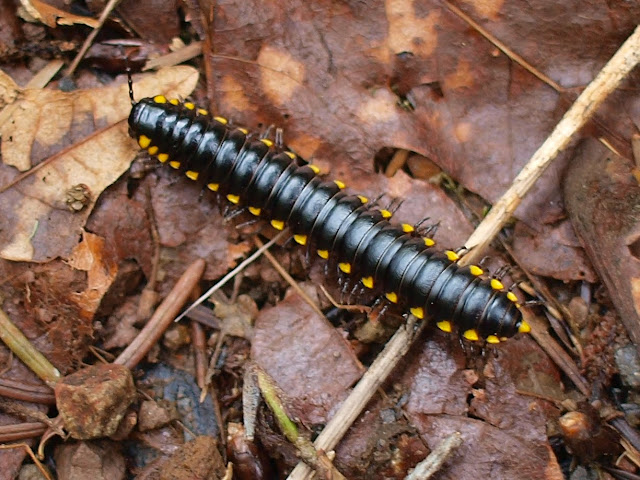 I just happened to see this wasp nest on a branch about a foot above the ground – fortunately, it was empty and only 1.5 inches around. 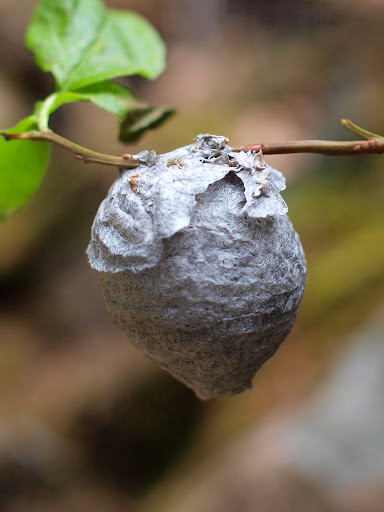 About 2 mi from the TH, I left the PCT and followed a surprisingly clear game trail up a spur ridge to 3150’ on the main ridge running S from Mowich Butte. On top of the ridge the game trail disappeared into a partial clearcut and it took a little routefinding to get oriented. While doing so, I enjoyed a good view of Hood. 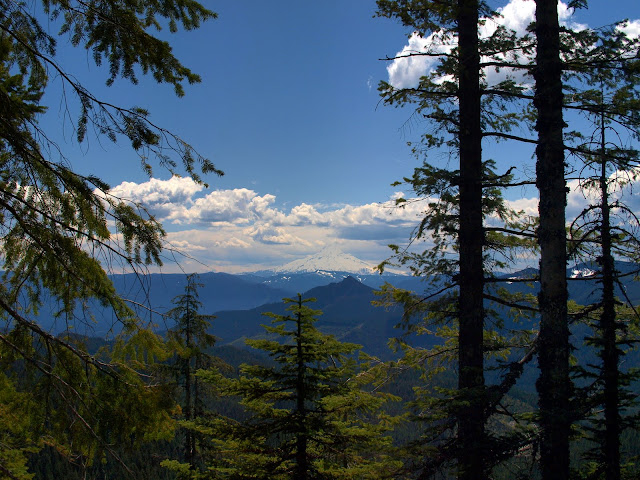 I worked my way N through the clearcut to Road 41 and then to the spur road that leads to the top of the Butte. Both roads are bordered by partial clearcuts so it wasn’t the most scenic experience. Alternatively, I could have stayed on the PCT until it turned due east (as suggested in A&A) and then had a much shorter scramble up to Road 41 but that would have meant more road walking (but, in retrospect, less routefinding). The spur road dwindled as it climbed, to the point where it was almost a trail just before the top of the Butte. The only snow of any depth was right at the summit (3513’). 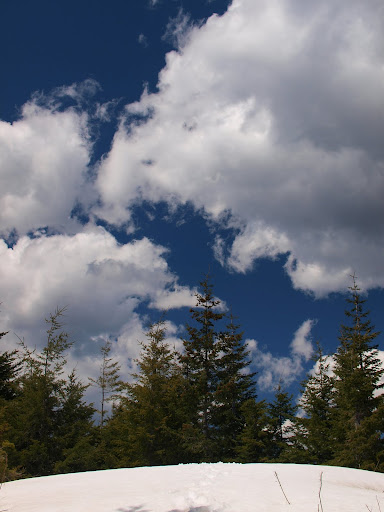 There used to be a fire lookout on the Butte – which is long gone – but the trees that were cut back then haven’t grown back entirely yet, so I had good views of St. Helens, 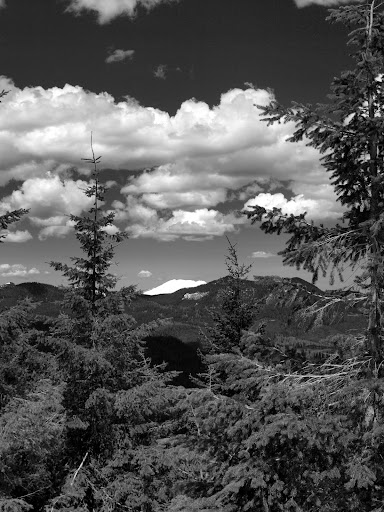 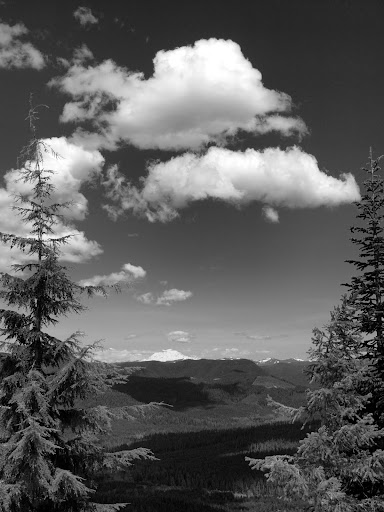 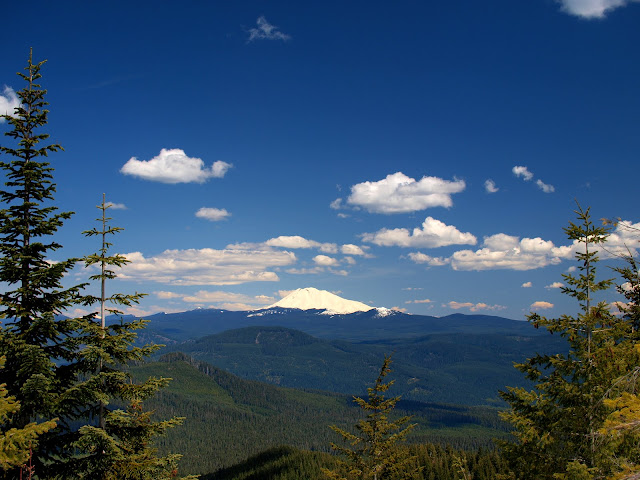 Overall, it was a sunny day, the hike was just right (6 mi RT with 2000’ gain),and having to walk on a road through clearcuts was amply redeemed by the PCT (well graded with waterfalls) and the very good views from the summit. One day I’ll have to come back to see if there really is a Sedum Ridge Trail.
Top

AlexanderSupertramp wrote:Really nice Van, and great pics. I quite enjoyed your B&W treatment as well.

Thanks. I started with B&W and its fun to come full circle back to it via the numerous features on the Olympus E-420. Pablo provided a trip report with coordinates for the Sedum Ridge TH, so I'm likely going to give this one another try.
Top

A lot of people aren't aware these are the Cyanide-Producing Millipede (Harpaphe haydeniana). Fascinating creatures with a little poison thrown-in for kicks.

I've been seeing a lot of Rough-skinned Newts this year... which are likewise... fascinating creatures with a little poison thrown-in for kicks.


VanMarmot wrote:I was looking for a hike on the sunny side of the Gorge, ...

as well as some insect life.