Was up in Seattle on Thursday giving a presentation - some thought it went really well, others not so much. I came away feeling a little down. Decided that a big dose of natural endorphins were needed to brighten my mood. A loop hike involving Rock of Ages and Bell Creek seemed like just the thing to get nature’s opiates flowing. I started at Multnomah Falls (better parking) and include the following picture just to show that there are rare moments when the bridge at the Falls is not covered with tourists. 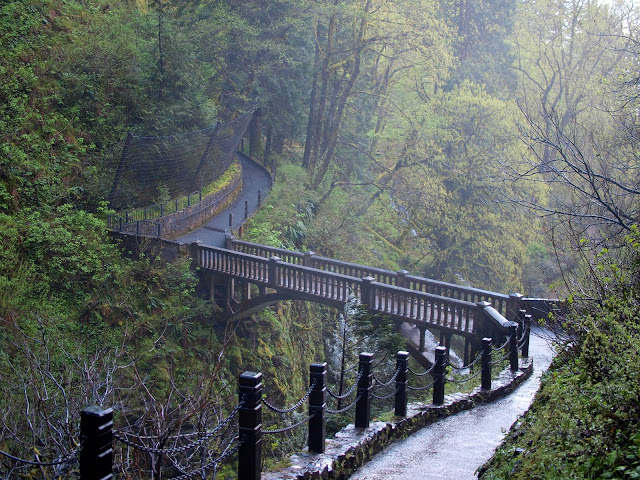 From the Falls I went west on the 400 trail and the Gorge Highway to the Horsetail Falls TH, pausing along the way to admire the restored highway tunnel and what woodworking looks like when all you've got are 12x12 timbers. 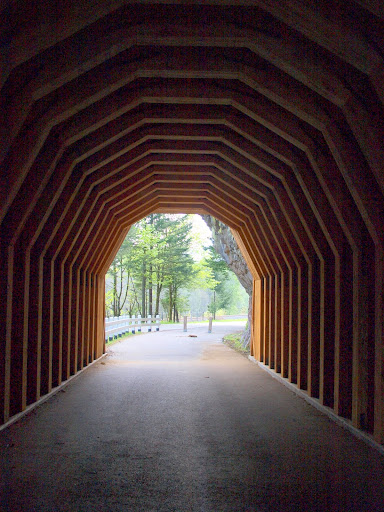 The Rock of Ages use trail starts its near 3000’ climb up to the Horsetail Creek trail (#425) just as you come in sight of Ponytail Falls. I hadn’t done this trail in about two years and was struck by how well used it’s becoming – it’s now very easy to follow and not longer the scraggly use trail it was several years ago. After about 1.5 mi of steady (remorseless?) climbing I came to the Devil's Backbone and probably the most expansive viewpoint on the entire hike. I looked around for evidence of the “Mystery Trail” – presumably a climbers route over to St. Peter’s Dome – but could find nothing. 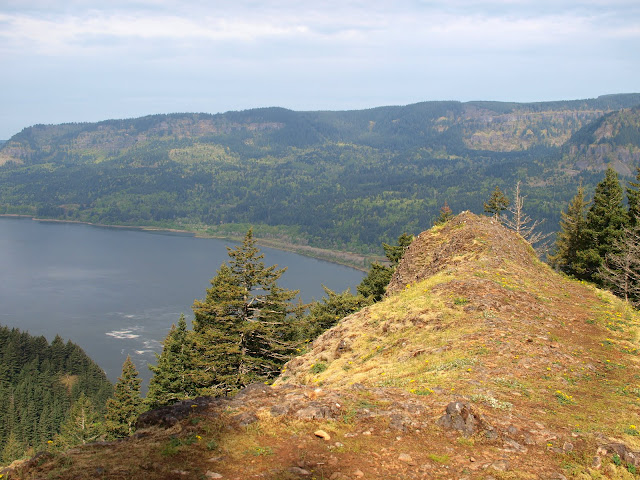 The weather kept alternating between glimpses of sunshine and overcast, but there was no wind and the air temperature was very pleasant. After the Rock, the climbing continued, now relieved somewhat by level stretches along the ridge. The trail goes around this impressive outcropping which marks the 2/3 point on the ascent. 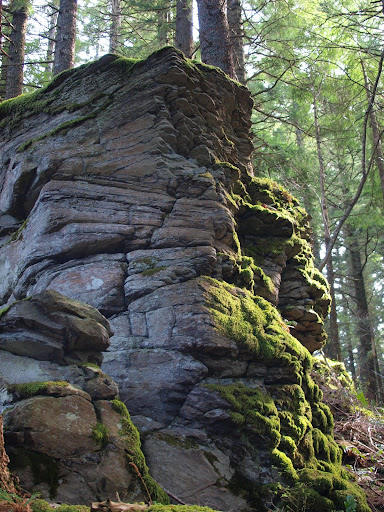 Three miles after leaving Ponytail Falls, I reached the junction with the Horsetail Creek trail and turned right toward Oneonta Creek. With a few exceptions, all of the trails I was on today were free of snow and clear of significant new blowdowns. After crossing the three forks of Horsetail Creek, I came to the junction with the Bell Creek trail (#459). 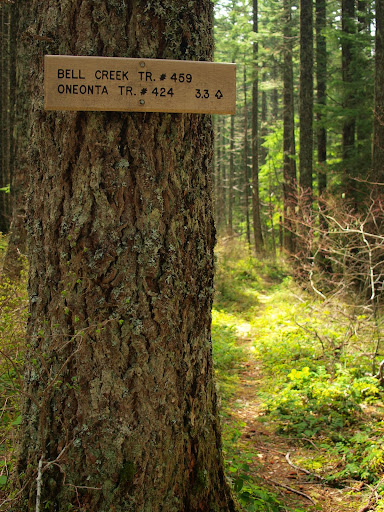 This is a really useful trail that provides a way to reach the trails around Larch Mountain without having to drop into, and climb out of, the lower Oneonta Creek valley. It also gives access to some of the best old growth forest in the central Gorge. Unfortunately, it’s underappreciated – it’s not mentioned in many of the popular trail guides and doesn’t even appear on the Green Trails(tm) Bridal Veil map. This lack of recognition (plus its remore location) may explain why it’s in need of more than a little maintenance. It’s part creek in some places, 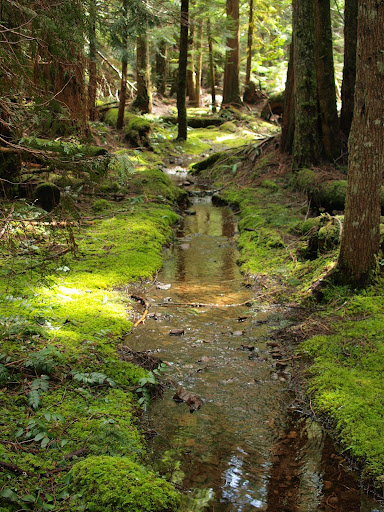 the footbridge (a good lunch spot) that makes crossing Bell Creek easy is missing part of its railing, 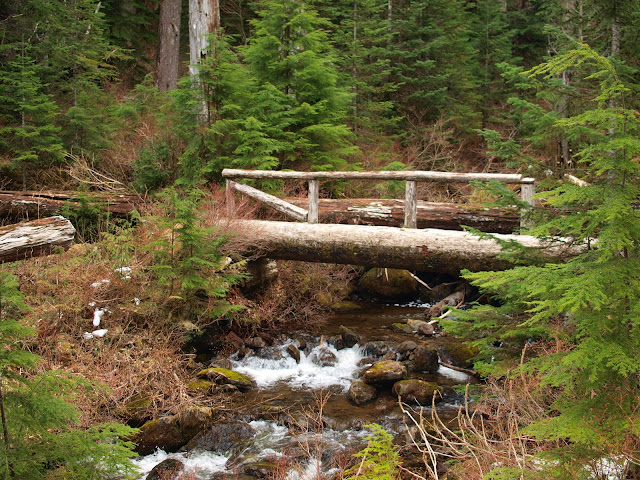 and there are a several large trees down on the trail about 0.5 mi west of the bridge. It’s in this area where skunk cabbage (Lysichiton americanus) make an appearance. 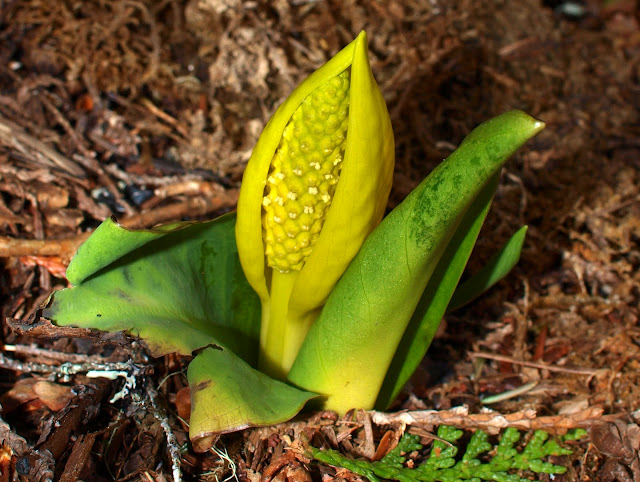 Shortly thereafter I came to junction with the Oneonta trail (#424) and encountered the first (and only) slightly significant snow of the day – it covered parts of the trail but didn’t call for gaiters. I started the trip back on #424, pausing for a tree fungus growing on a tree with a new tree growing on it, 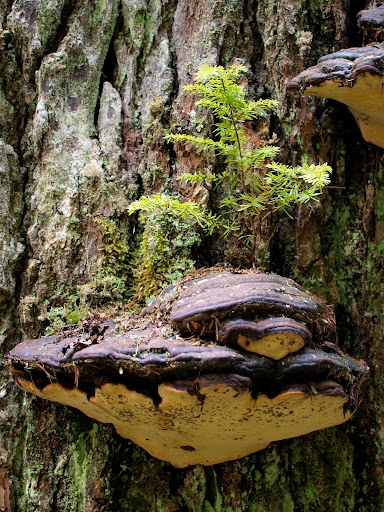 before meeting the Franklin Ridge trail (#427) and taking it back to Multnomah Creek and on to the parking lot. Along the way I saw this tiny but strikingly stripped flower, complete with tiny bug. 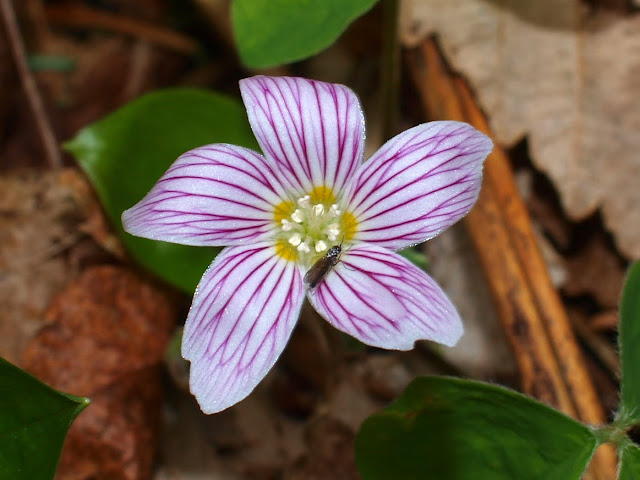 Tourists starting appearing on the trail below the Nesika Lodge service road and increased in number on down to the parking lot. As I haven’t yet been able to raise the funds for a serious GPS device, I’m estimating this loop at about 17.2 mi and 3,200’ gain. The solitude, the exercise, and the endorphins all did their job and I felt ever so much better as I headed home.
Last edited by VanMarmot on April 26th, 2010, 5:38 am, edited 1 time in total.
Top

Fantastic report and pics! I really love that whole loop. I especially like the Bell Creek and Upper Oneonta Trail areas.

AlexanderSupertramp wrote:Fantastic report and pics! I really love that whole loop. I especially like the Bell Creek and Upper Oneonta Trail areas.

Agreed! Bell Creek is an under appreciated gem.
Top

Did you happen to take pictures of the three horsetail fords?
Top

Did a similar loop a few weeks ago and the 3 Horsetail fords were very easily crossed.

I wonder if they are a lot higher right now after some snow?
Top

Did you happen to take pictures of the three horsetail fords?

Thanks! Here's a shot of the crossing at the middle fork. It was easy to cross just upstream (out of view on the left side of the picture). 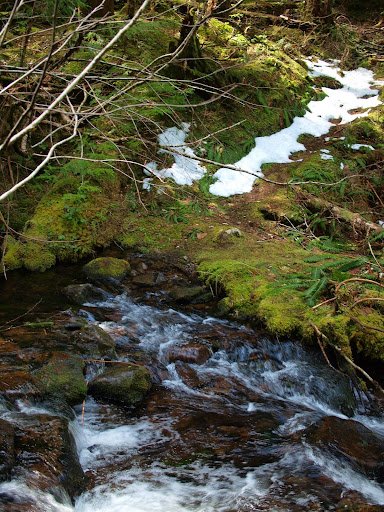 The west fork might be up a bit due to the recent snow & melt and was probably the longest crossing. The east fork was the shortest crossing, but none of the crossings were all that difficult - given a trekking pole for balance and care in not stepping on the slippery parts of the rocks.
Top

Nice trip report, I have been curious what Rock of Ages looks like as I did a side trip up the spur trail you mentioned last year to an arch shaped rock and had assumed such a prominent feature was the Rock of Ages... until I checked my map. Since then I've been wanting to head back and skip the arch and find the ROA, your photo proves it a great viewpoint. Cant wait to get out there.
I am curious if anyone here knows if there is a name for the arch feature?

Thanks Lurch. That matches with my picture.
Dave
Top
Post Reply
14 posts