When I hiked Table Mountain in February, it had almost no snow on it. That was a good hike, but I think Table is more fun with snow. Although the recent storms put a crimp in my plans for a very early backpacking season, they did bring a generous helping of new snow to the upper reaches of Table. That, combined with the promise of sunny weather, put Table on today’s to do list. The dirt (hiker) parking lot at Bonneville Hot Springs was uncharacteristically full when I arrived at 8am and I expected traffic jams on the trail. But there were only 3 other hikers actually in the lot and I didn’t see them again until the summit. The roads and trails from the parking lot to Heartbreak Ridge were completely snow-free. The first snow didn’t appear until around 2,000’ 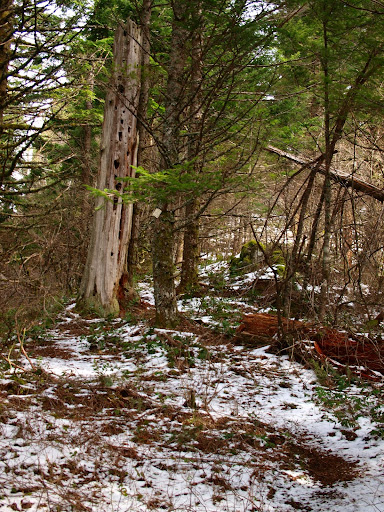 and didn’t have any depth until 2,200’. I hadn’t been up Table since the accident in March that claimed the life of Kate Huether but found the memorial to her (located next to the trail in the saddle between Point 2692 and Table) very poignant. 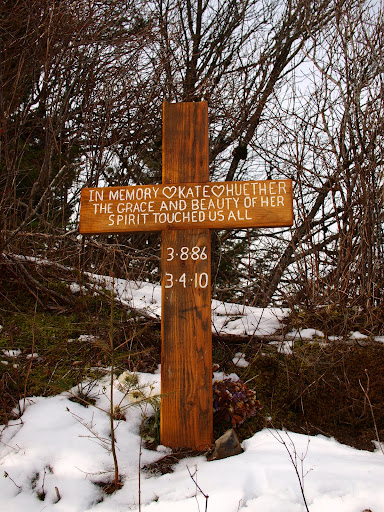 It’s certainly a memorial with a remarkable view. 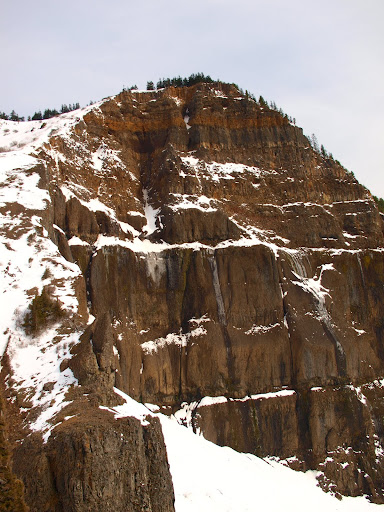 Unlike my previous hikes of Table in the snow, the “new” trail was easy to see and follow this time. After wandering through the trees, I came to the base of the boulder field. 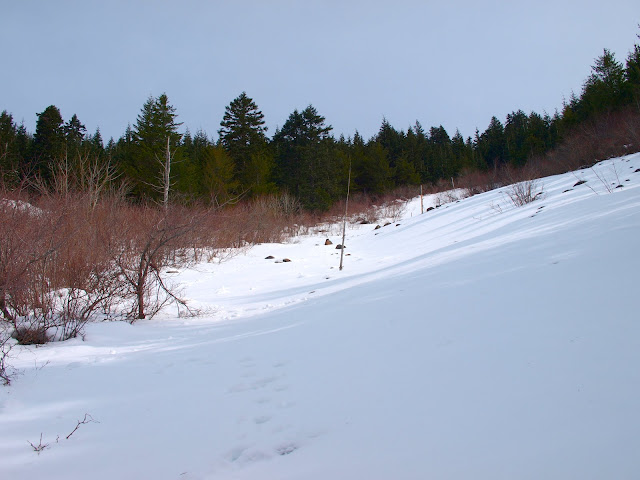 I had seen fresh human & dog prints on the trail and finally saw a guy and his dog near the top of the field. He’d done his fair share of postholing and I did mine by making his postholes deeper. Climbing a boulder field is evil – it is even more so when ankle-biting gaps between the rocks are covered with at least two layers of breakable crust. This part of the climb was a very aerobic pain in the butt (and thighs and calves and lungs, etc.). Eventually it ended and I was able to traverse over and climb to the summit. I wanted to thank the guy for breaking trail but he apparently headed on down without summiting. Shortly after my arrival, the 3 guys I’d last seen at the trailhead arrived – to give some perspective to Hood. 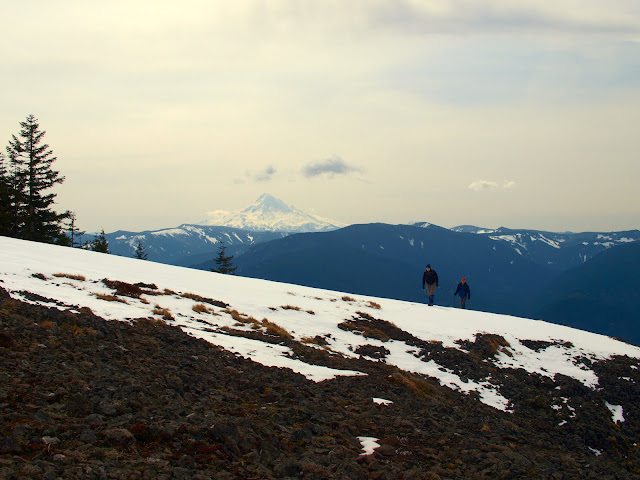 In the other direction, Adams, Rainier, and St Helens (not in picture) were visible. 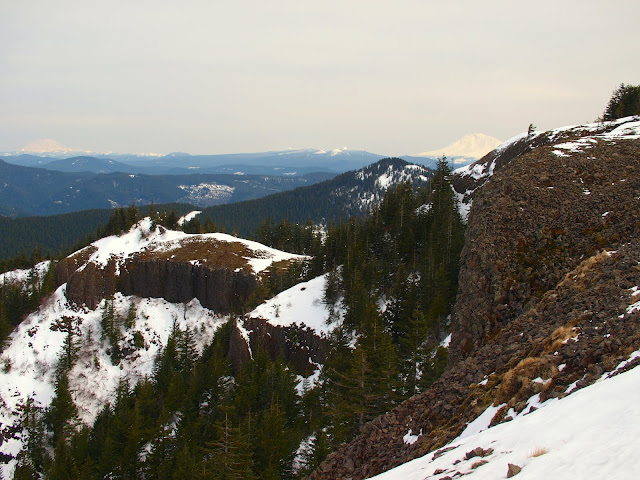 The wind had been blowing pretty hard on the way up, but there’s a sweet spot on the top that provided sheltered spot for lunch. After that it was down the west ridge. I managed a couple of short glissades but mostly it was clumping down through others postholes. There were a couple of wind gusts that were strong enough to require me to form a tripod with my trekking pole and legs to stay upright. While I’d been almost entirely alone on the hike up, there were numerous folks to keep me company on the way down. First a large group of Mazamas basic mountaineering school students, then private parties of 5, 3, 2, 2, 7, and 2 between the top and Carpenter Lake. On the trail from Carpenter Lake to the hot springs, I passed about 20 folks in a volunteer trail crew who were sawing blowdowns and trimming undergrowth. Working a 2-person crosscut saw looked about as hard as postholing up a boulder field. By the time I got back to the hot springs around 1:30, all the parking lots, dirt and paved, were full. 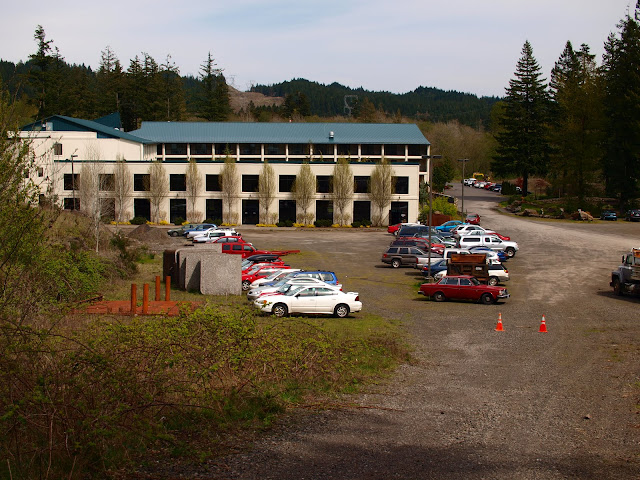 I like solo hiking but it was nice to see so many folks out enjoying (and helping to maintain) the trails. People are less apt to protect what they don’t see any use for.
Top

We were several thousand feet below you on the PCT, hiking from Bonneville trailhead to Greenleaf overlook and beyond. The wind was pretty chilly today - nothing new for the Gorge but I can only imagine how cold it must have been toward the summit. Lacking snowshoes, we went for the snowless hike but enjoyed your pictures!

just wondering >> was your Table summit photo from April 10 2010 ?
reason I ask is that I was there yesterday and the summit had wind steady at 40 mph with near constant gusts to 60mph with total snow cover > no bare ground . snow was knee to in some places hip deep. Your photo looks like a relatively benign day with a large bare area.
Top

just wondering >> was your Table summit photo from April 10 2010 ?
reason I ask is that I was there yesterday and the summit had wind steady at 40 mph with near constant gusts to 60mph with total snow cover > no bare ground . snow was knee to in some places hip deep. Your photo looks like a relatively benign day with a large bare area.

Yes, I was on Table on April 10th. The wind was gusting to maybe 30-40 mph but it's effects were most evident on the west ridge. Snow enroute to the summit, and in many places around the summit, was often thigh deep. However, there is one spot on top (right after the west ridge trail tops out) where the terrain and trees collude to create a snow & wind free spot - 50' away from this spot and you're in wind and/or snow.
Top

Nice pictures of the snow without precipitation ruining the view.
Top
Post Reply
5 posts • Page 1 of 1