Having spent much of last week in San Francisco, I felt lucky to be back in Oregon in time to experience what looked to be our one sunny day for the foreseeable future. A loop hike to Dublin Lake and down the Tanner Cutoff Trail (#448) had been on my list for awhile, so that was it then. I got an early start – figuring that hoards of other hikers would be equally enthused to be out enjoying the sun – only to find myself the only car at the Tooth Rock TH. This solitude was prescient – I saw no one else until much later in the afternoon. It was a clear day at the TH but a band of clouds and fog was waiting for me as I started up the Tanner Butte trail proper. This part of the trail doesn’t have many viewpoints, but there was a view of Table (once again with some snow) through the mists. 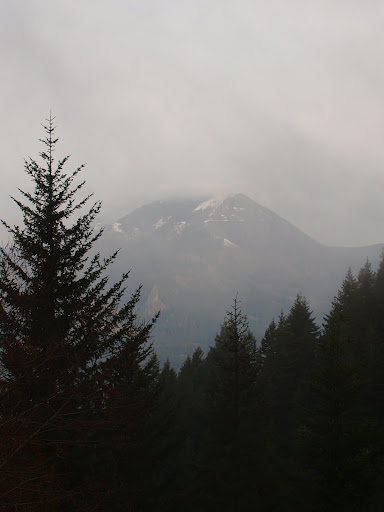 Shortly after I crossed under some decorative features provided by the BPA, also shrouded in the mists. 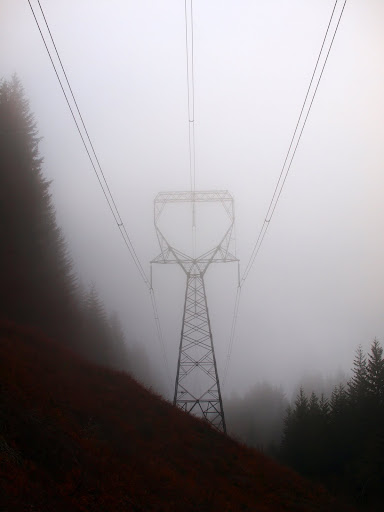 By the 2000’ level, however, the sun was gaining the upper hand and the clouds were beginning to dissipate.

There was a point on the trail at about 2400’ where it was possible to traverse out into an open area and see the clouds descending into the Gorge. 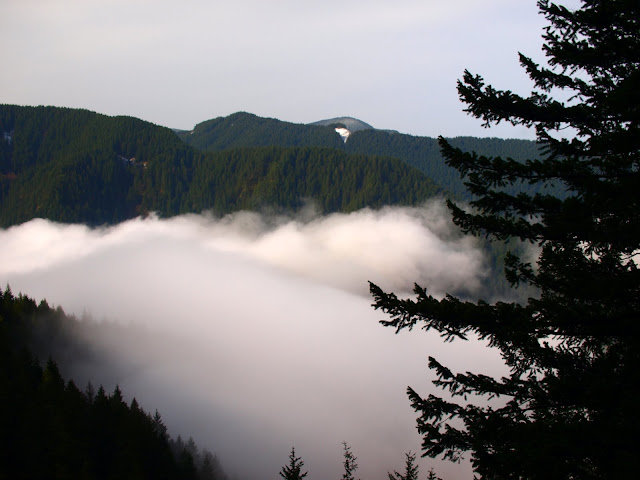 The tree fungi (my favorite alternative to flowers) weren’t much in evidence today but these liverworts(?) were pretty cool looking. 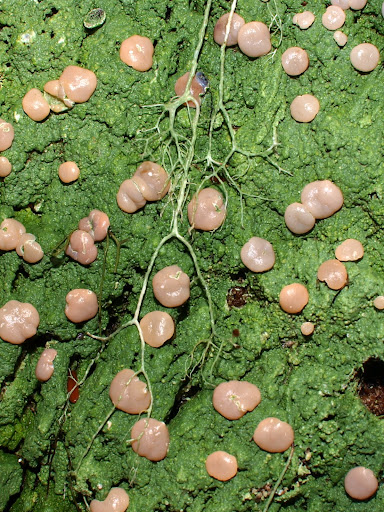 The trail up to the informal campsite (and turnoff for the extremely vague Wauna Point trail) at about 2800’ was in excellent condition. From here on it would get narrower and a little more encroached on by vegetation but never hard to follow (a number of yellow flags also helped with following the trail). Also thanks to the volunteers who did trail maintenance on the fallen trees between here and 3000’! A sprinkling of snow started about 3200’ and got thicker as I climbed but it never got more than 0.5-1’ deep – just mostly wet, heavy, and mushy. 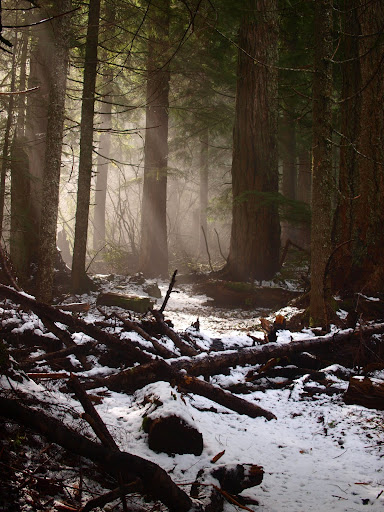 The fun started as the trail gradient eased at around 3600’. By now the sun was well up and, while it wasn’t doing much to warm the air, it was loosening the snow in the trees, while came raining down on me in all sizes from raindrops to snow cones. I had to put on rain gear to run this gauntlet of snow-laden trees. 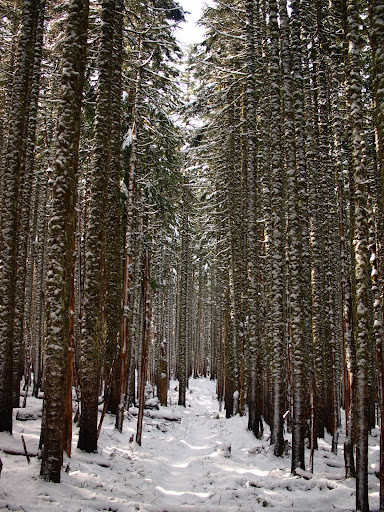 The open shore of Dublin Lake provided a sanctuary from this snowy rainfall, so I stopped there for a break and a snack. 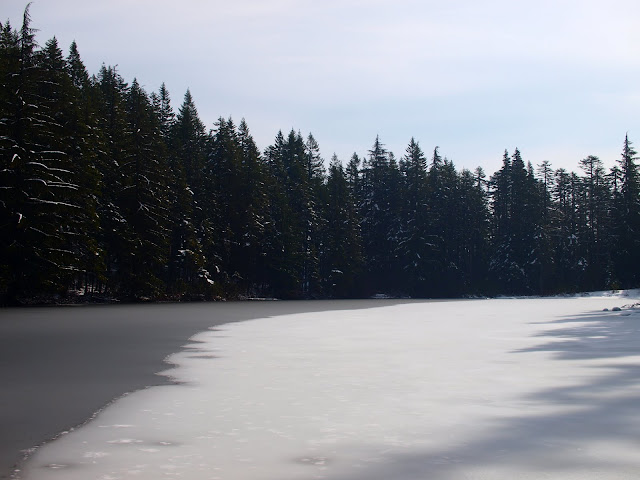 The lake was covered with a thin slurry of ice and snow – glops of wet snow falling off the trees went right through it. 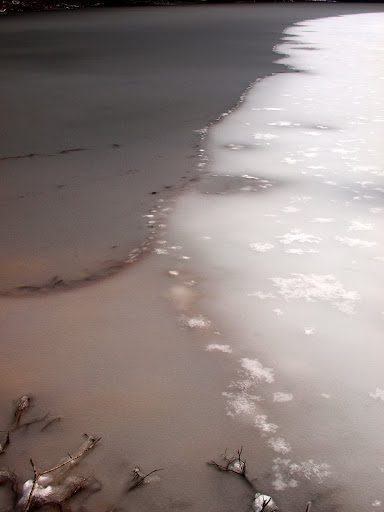 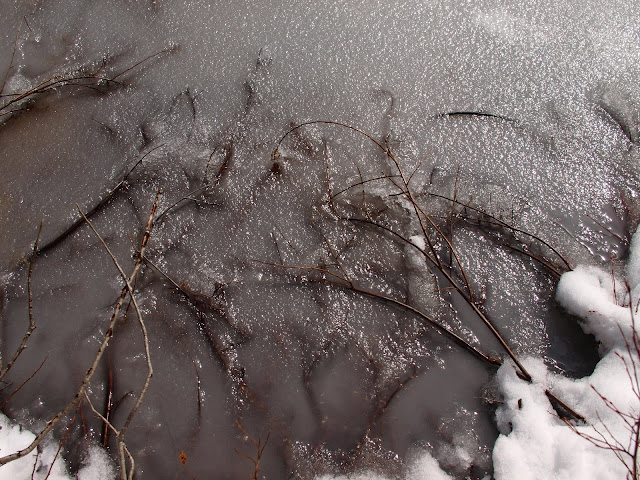 After leaving the lake, I looped back to the TH via the Tanner Cutoff Trail (#448). The last time I was on this trail was maybe 15 years ago and even then I thought it was not in good shape. Sorry

to say that nothing seems to have been done to change this in the intervening years. Most of it is hardly better than a good use trail. In several places around the 2800’ level, it is completely choked with blowdown. 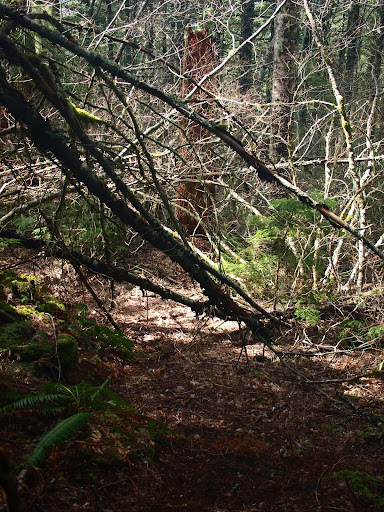 There are sections in the middle where it is very faint and others were it just blends into the undergrowth. 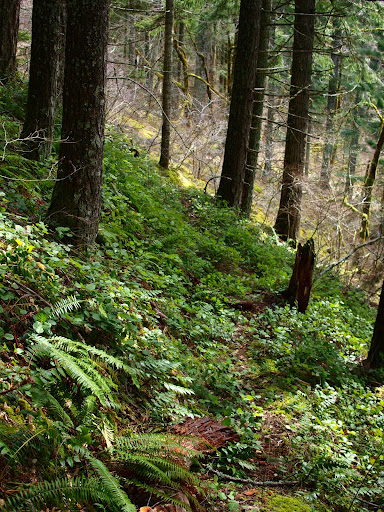 The worst problems are just before it junctions with the Tanner Creek trail – if it weren’t for some strategically placed flagging (and the fact that coming down makes it easier to see whatever trail there is) – I would have had to resort to XC routefinding. Someone trying to come up the 448 from Tanner Creek would really need to pay attention and watch for flagging so as not to miss it. I’d say it’s been more than awhile since anyone gave this trail the maintenance it deserves as an important connecting trail. 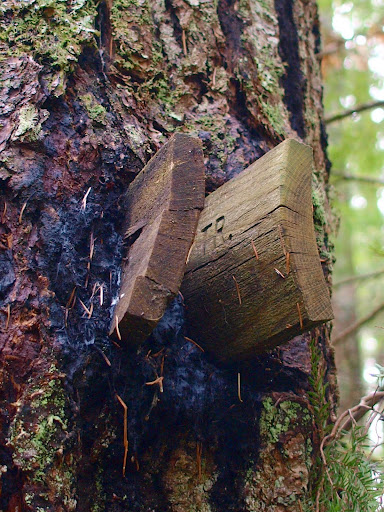 The hike back up and down the road to the TH was pleasant but a little tedious. Aside from a solitary mountain biker on the road, a father/son campout along Tanner Creek, and some wandering hikers near the TH, I saw no one else the whole day. Sullivan lists this loop as 14.3 mi with 4250’ gain. Aside from my worries about the future of the 448, it was a good day in the woods.
Top

When I did Wauna point last weekend, I saw the signs for Dublin Lake. It looked rather far for me to go for that day, but I'm curious as to if you have ever done the trail to Dublin Lake from the old Tanner Butte trailhead?
Tyler Mode
http://www.naturespixpdx.com
Top

When I did Wauna point last weekend, I saw the signs for Dublin Lake. It looked rather far for me to go for that day, but I'm curious as to if you have ever done the trail to Dublin Lake from the old Tanner Butte trailhead?

Thanks! This hike was along the trail from the old Tanner Butte TH (after I walked up the road to it) to Dublin Lake, with a return via the Cutoff trail. The lake is about 2.4 mi (one way) from the Wauna Point trail junction. With the walk up the road, it's about a 13 mi RT trip to Dublin Lake from Tooth Rock TH.
Top

Thx for the great pictures and report. I did this exact loop in the opposite direction (to avoid having to hike out on the #777 Rd) about a month ago and concur with your observations about the #448 trail, were it not for the flagging at the lower end, I'm not sure I would have been able to locate the trail. Higher up I walked off the trail a couple of times.

Great report, VM, you're really putting in the miles. And I think you need to change your avatar to something fungus related since you always seem to find some good looking stuff.
The light dappled forest shot is one I can never capture but that photo shows the forest at its best. And the show covered shot reminds me of a Bev Doolittle painting.

The Tanner Cutoff Trail is most definitely in need of any some maintenance - see my trip report from last summer http://www.portlandhikers.org/forum/vie ... f=8&t=3216.

I remember crawling under that thicket you took the picture of.

On my scouting trip I did some flagging from the bottom up, but I should have done some on the descent. Anyone coming fronm Tanner Creek will have so me issues.
Top

BaileyBoy wrote:Great report, VM, you're really putting in the miles. And I think you need to change your avatar to something fungus related since you always seem to find some good looking stuff.
The light dappled forest shot is one I can never capture but that photo shows the forest at its best. And the show covered shot reminds me of a Bev Doolittle painting.

I'm taking advantage of the low snow year to do more miles earlier this year than in previous years (200 mi since January). I hope to get two more state highpoints (ID & UT) this summer, as well as finish the John Muir Trail, so any hike that helps get my bedraggled body into better shape is what I'm after.