The 4T trail is a Metro government effort to get folks to try all of Portland’s transportation options (trail, tram, trolley, train) plus see some of the city plus get a little exercise (http://library.oregonmetro.gov/files/tr ... ytrain.pdf). We took a swipe at our carbon footprint on Saturday by not driving to a hike in the Gorge (although the temptation was immense) and giving the 4T a try instead. It’s a 30 minute walk from our inner SE dwelling, across the Hawthorne Bridge, 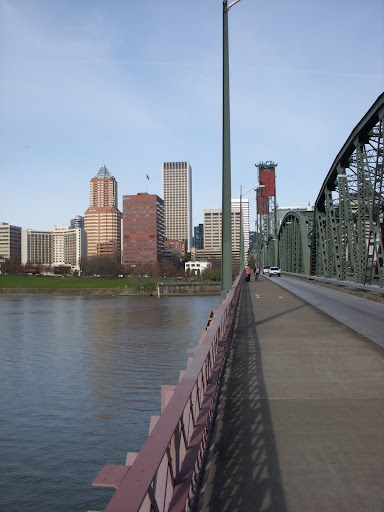 to the closest MAX stop, 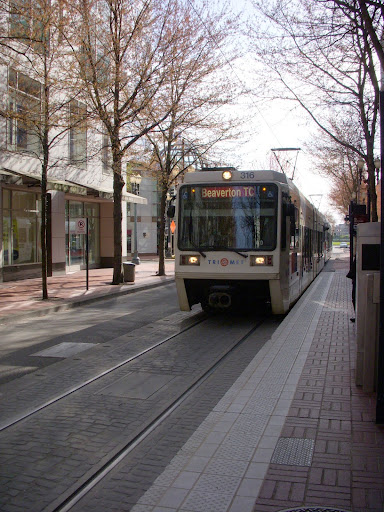 where we caught the train for a ride to the Washington Park MAX station. Once out of the station, we had to find the Marquam Trail. It’s just to the west of the station but access to it is not obvious – our choice was to either walk up SW Knight to where it intersects the Wildwood or down the street and through a parking lot – we went with the parking lot. Once found, it quickly ends at an intersection of streets and freeway off and on ramps – where to next can be a bit of a mystery as signage is minimal (but better than before). We crossed the freeway bridge, playing dodge-car with drivers frantic to get to the zoo, 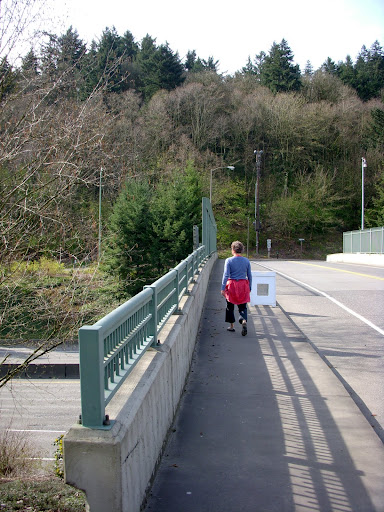 then went left down the freeway on ramp – the trail isn’t visible at this point but it’s about 100’ down the ramp on the right (at the arrow) – to the continuation of the Marquam Trail. 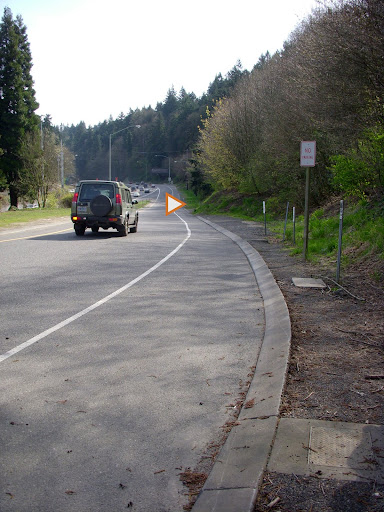 This is the longest section of actual trail – about 0.5 mi – on the 4T route and as good an urban trail as those in Forest Park proper. 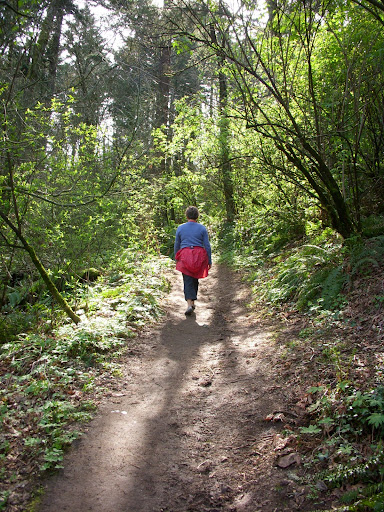 The trail deposited us on SW Patton where there were some 4T signs directing us to Council Crest Park where the view was big – St Helens, Rainier, Adams, Hood were all visible. From the crest we headed due E to intercept the Marquam Trail again as it descended toward OHSU. There are two options ahead – the forest walking trail and the urban shortcut – we went with the shortcut, which took us along SW Fairmont, Marquam Hill, and Gibbs Streets 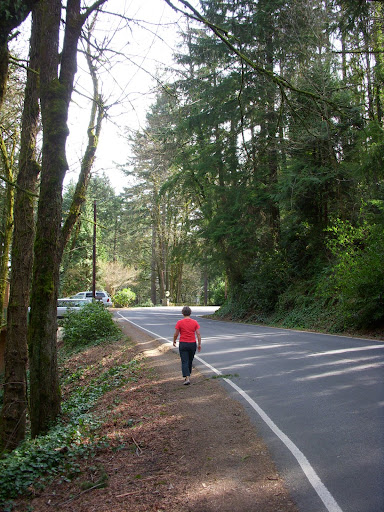 to the tram station at OHSU. The tram ride is free going down ($4 RT) and provides sweeping views of the city (and of people’s backyards in Lair Hill). 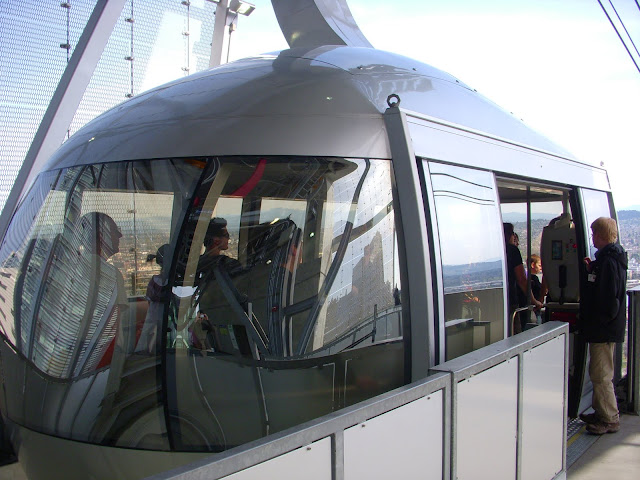 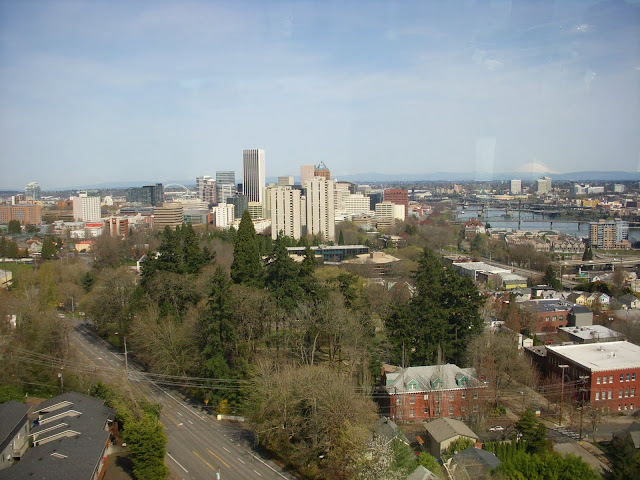 The tram dropped us at the OHSU Commons trolley stop 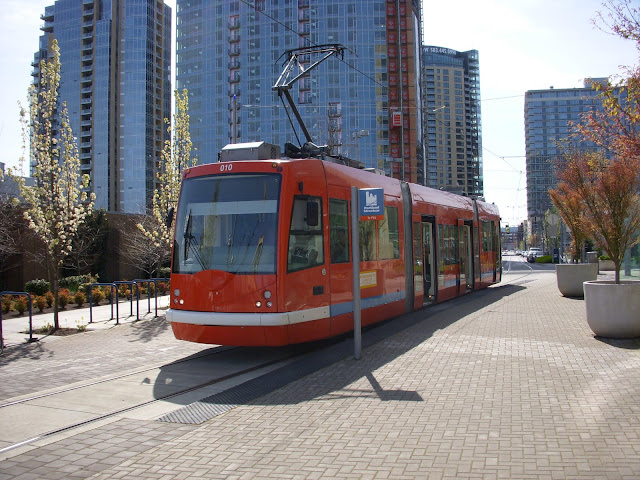 and we took the trolley back into the city. The “official” 4T ends at the SW 10th & Taylor stop, but we stayed on until the Pearl, where we finished our 4T adventure with a short hike to the Rogue Brewery. After suitable refreshment appropriate for an urban adventure of this magnitude, we did a short hike to the nearest bus stop and let the #4 bus get us home.[/size]
Last edited by VanMarmot on January 31st, 2016, 4:53 pm, edited 2 times in total.
Top

I'd like to try that sometime. People don't appreciate the things close to home.

Great report. It is a fun one close to home. It's also a great thing to do with out-of-towners visiting the city. (Although, I'd probably add a side-trip -in the opposite direction- to the Rose or Japanese Gardens in Washington Park.)

As an FYI, the OHSU tram is closed on Sundays and holidays.
Top

Another fun one is from the Pittock Mansion to Council Crest and back... gotta love the exhaust fumes from crossing over hwy 26 huh!!!
Top

Cool urban hike! The picture looking north from the tram includes my office. So it's cool to see the tram rider's view as I spend the majority of my waking hours watching "Jack and Jill" going up and down pill hill. Thanks for the report :0)
Kam
Top

Fred wrote:I'd like to try that sometime. People don't appreciate the things close to home.

Thanks. Its a Vancouver Island marmot - a subspecies found only on Canada's Vancouver Island - which, until recently, was threatened by extinction due to habitat loss. We've been contributing to a recovery fund for it for several years now and am happy to report that its numbers are once again increasing due to captive breeding and successful releases. Nice to be on the winning side.
Top

ErinL wrote:Great report. It is a fun one close to home. It's also a great thing to do with out-of-towners visiting the city. (Although, I'd probably add a side-trip -in the opposite direction- to the Rose or Japanese Gardens in Washington Park.)

As an FYI, the OHSU tram is closed on Sundays and holidays.

Fortunately, the tram runs on Sunday afternoons during the summer (May-Sept). So after you get the out-of-towners up and fed, you can take them out for the afternoon. 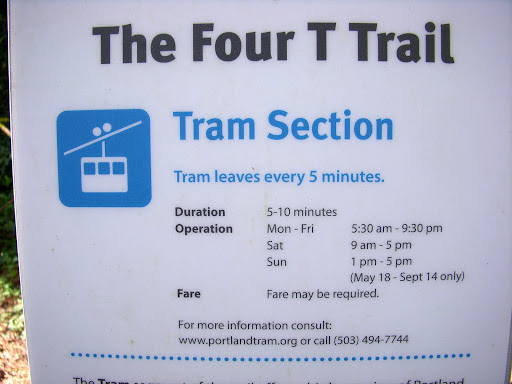 My bad! I take the tram to work every day. I'm just used to hearing one of the tram operator's spiels (which is, unfortunately, permanently burned into my brain) about the tram being closed on Sundays.
Top

My niece and I did this a few weeks back. We had fun, met a lot of people along the way. Will do it again some day.
Top

Thanks for the report; I look forward to trying it out!
Top
Post Reply
13 posts