Today, with the weather cooperating so wonderfully, I decided to do a traverse of Table Mountain, ascending via its NW ridge and descending via Heartbreak Ridge. I started at Bonneville Hot Springs then took the use trail, the old road, another use trail, and part of the PCT up to the junction with the West Ridge trail. Rather than just head up to the summit from there, I continued NW on the PCT. The weather was good, mostly sunny, but clouds and fog still clung to the valley floors as I came around the west side of Table. 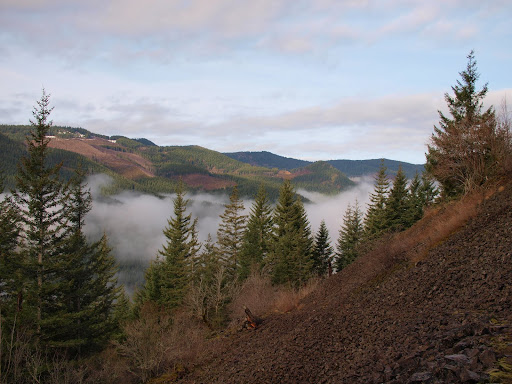 Eventually the PCT will cross two dirt roads under the power lines before reaching a third road. Before reaching this third road, there is a large collapsed log structure that looks like someone built a substantial bridge or causeway across a broad gully for some unobvious reason – looks like a challenge for the Gorge historians. 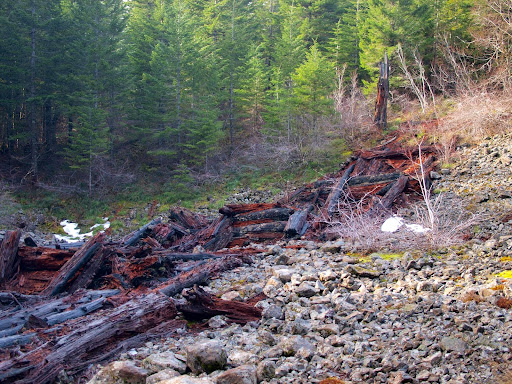 At the third road, I turned right and followed it to the top of the ridge and a 3-way road junction (which isn’t that obvious). The road to follow SE starts right behind the trees in the center of this photo. 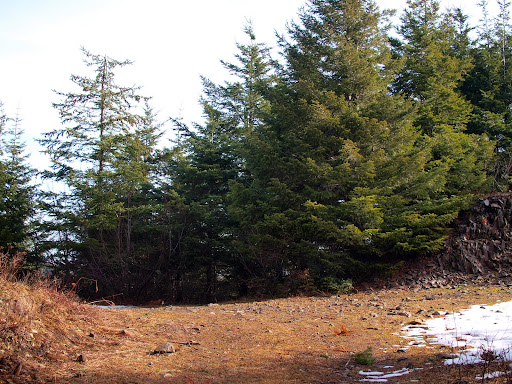 This road was still covered in snow (the only section of the entire hike with any snow) and there was some brush down but it was easy to follow. There were numerous animal tracks, including the ones below, but no human footprints. This route probably fell out of favor as a loop once the Heartbreak Ridge trail re-opened. 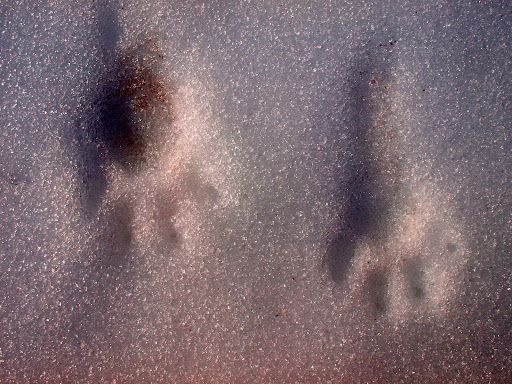 When the road ends, a small use trail continues SE along the crest of the ridge (it goes back and forth across the ridge and sometimes disappears but never goes more than 10 feet from the ridgeline, so it’s easy to re-acquire). Just before this trail reaches the summit of Table, there are two short steeper sections, 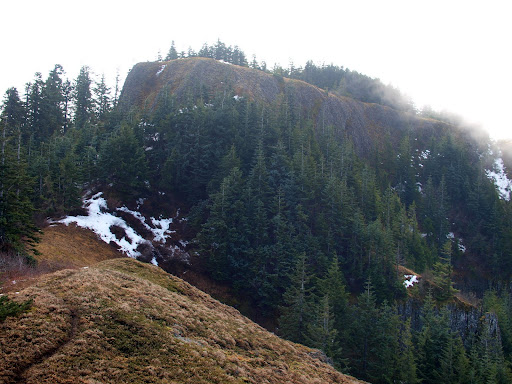 and then you’re on the summit, looking down along the entire ridge, where the trail is a faint line near some snow patches in the center right of this view. 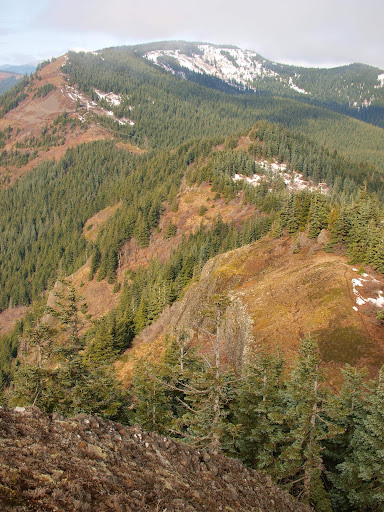 I traversed Table and took the “new” Heartbreak Ridge Trail back to the PCT. Since I’ve usually done Table when it’s snow covered, this is the first time I’ve ever seen this trail, much less actually walked on it. The advantage of this route is that (except for the boulder field section) it’s easier on the knees and you get a great view of the shear face of Table. 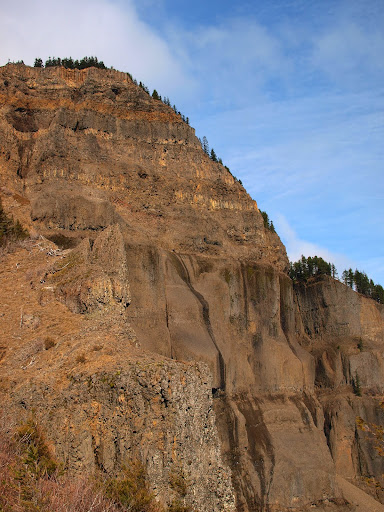 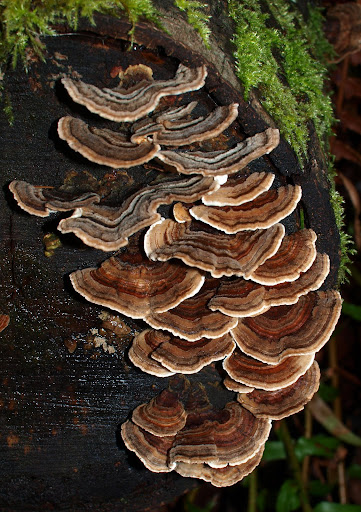 and a tiny flower (the buds are 1/8” long) blooming on the forest floor. 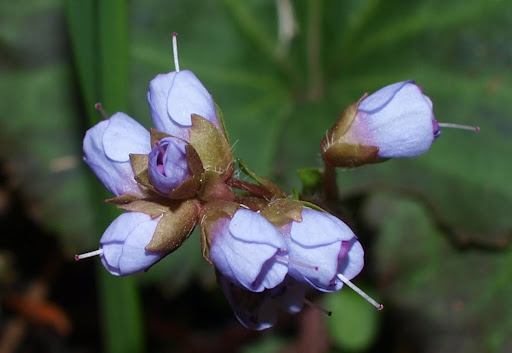 Another great day on the trail...

Great pictures and thanks for the report! I was driving back yesterday from Herman Creek, eyeballing Table the entire way. Think it's going to have to be on the "to-do" list this coming weekend.

Trip reports are torture while at work. Sigh.

I haven't used the Aldrich Butte TH since I always start at the hot springs - parking in the dirt area to the left of the main building. There's a good use trail from the top of their property to the old road S of Carpenter Lake. I used to park at Greenleaf Slough and then follow the power line road up to another use trail that also lead to the road to Carpenter Lake (you can also get to this use trail from the hot springs - see Sullivan's NW guidebook). But several years ago some guy with a gun started harrassing people parking there - claiming it was his land (does BPA know?) - so I moved to the hot springs which made their parking available about that time. I just think my car is safer there.
Top

Nevermind. Just saw that you posted where you started in the original trip report. Some days there just isn't enough caffeine.

Nice, Van! That sheer mountain face is tantalizing, I just love the exposure. I can practically smell all that lovely golden rock baking in the sun. And the flower shot is encouraging--boy, spring really is here early, hunh?

Nice report and photos - amazing how little snow up there compared with the past two winters!

The collapsed log structure is a piece of a far larger puzzle some of us have been trying to figure out for several years. BTW, here's a pic with my daughter in the frame for size reference:

I believe there were two sets of parallel tracks on the structure used as a siding for log cars. In the woods right next to the PCT on the other side of the road you hiked up are the crumbling remains of three separate steam donkey engine skids laid out end-to-end. The engines were the power source for an incline rail line leading to the main branch of the Hamilton Creek RR. Over 2,000' of 1 1/2" cable still rests in the woods below the skids. Also, uphill from the structure a long section of 1 7/8" cable. Everything I've found lines up logically and the bits and pieces of hardware are pretty convincing proof of the theory. Also, beag has a map from the 20's that shows the general outline of the tracks and lines and even shows a spot where a tunnel through the ridge is indicated. We don't think the tunnel was ever built, rather, the logs and rolling stock were pulled over the ridge and down into the Greenleaf Basin by cable. But who knows - Any tunnel would have been dynamited and backfilled so some of it could still be there. I know generally where it should be, but haven't found it yet.

Lots of history up there, for sure.

"Everything works in the planning stage".
Top

Don - thanks for the info! I suspected you or SplinterCat would come up with something. I am always amazed by the amount of heavy gear folks were willing to drag, lift, haul, or heave up into the wilderness as long as there was a possible profit. I'm much more familiar with mining equipment in this regard, so it's a learning experience to see that loggers were also into this.
Top

Very enjoyable report, Van, and it answers a question I've had which is can you exit Table Mountain to the north. When I was up there I didn't see any way down but obviously you came up that way. My question is how steep are the two sections to the summit and would a dog who is a good climber be able to do it. He has done Elks Mountain, Hamilton Mountain and other such places.

And as usual, great photos.

BaileyBoy wrote:My question is how steep are the two sections to the summit and would a dog who is a good climber be able to do it. He has done Elks Mountain, Hamilton Mountain and other such places.

As long as he's good about staying right with you on the trail, I'd say no problem. There's no real exposure except for a little section right near the top and the trail is good at that point.
Top

Cool report thanks. I was wondering about that route a couple weeks ago when I went up there. I used heartbreak both ways. When went up it was windy, cold and very much snowy on top.
Top
Post Reply
21 posts