As I was considering hiking options last Tuesday I thought about Table but then decided on a quick hike of Dog because it's further east where things are "drier” (ha!). The pea soup fog in Portland vanished into clear blue sky at Corbett which was then overtaken by clouds & gloom at Stevenson. As I hiked up Dog I could only gaze longingly west toward the bright sunny spot that had opened over Table. This section of trail disappearing into the mists reminded me of a 1950’s campy sci-fi film called the The Crawling Eye where mountain climbers are consumed by a one eyed-golf ball with tentacles lurking on the slopes of a misty mountain. 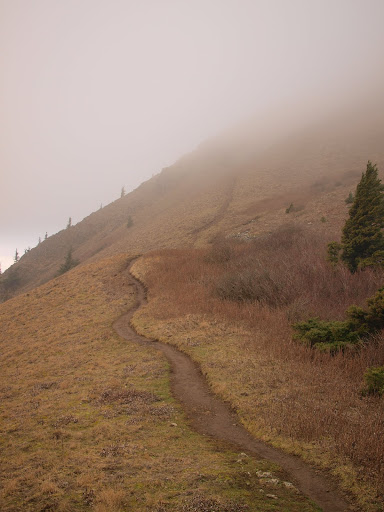 The summit was enveloped in cloud but there was still a view of that tantalizing sun break to the west. 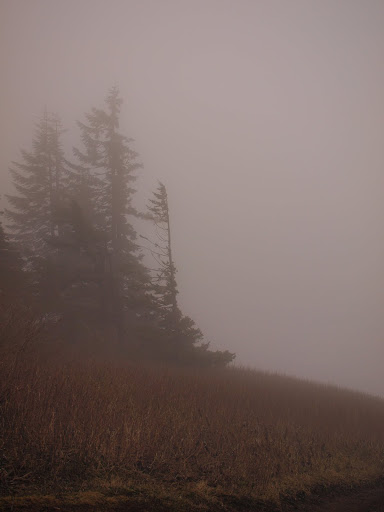 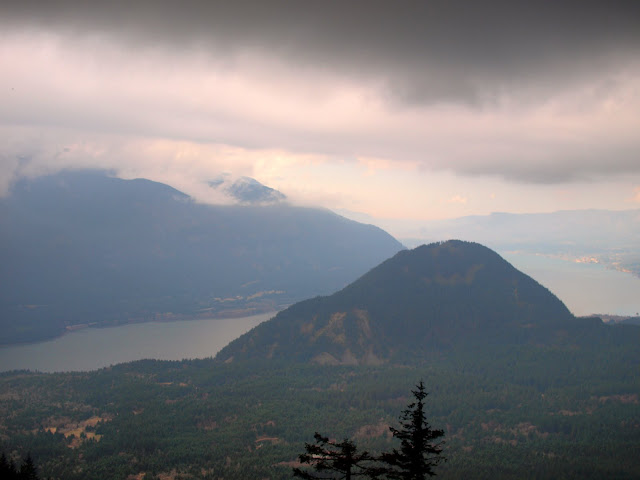 I looped back via the Augspurger Mtn trail and came across a Multnomah County work crew improving the trail. I don’t think these folks were either employees or volunteers but they were doing good work. Interesting that the county is loaning labor to the USFS(?). By the time I got back to the car the clouds had evaporated and the folks just starting out (there about 8 cars in the parking lot on this Tuesday morning) were doing so in full, warm sunlight. If Ted’s posting about road work on 14 really means long delays this might be my last visit to Dog for this season.
Top

A Multnomah County crew was up there a couple weeks ago when I was up there, doing the same loop, only in the opposite direction.

There was 6 inches of snow then. It appears to have melted.
Top

EDIT: I'm wondering how WA 14's being closed from 4 pm to 6 pm weekdays during the wildflower season (March to mid-June) wouldl keep anyone from hiking there? http://www.wsdot.wa.gov/NR/rdonlyres/2D ... imized.pdf
Last edited by Grannyhiker on February 12th, 2010, 12:19 pm, edited 1 time in total.
Top

Having just sent in my second of three property tax payments and receiving a letter from them a few months back saying that as I lived on a rural road I couldn't really expect much in the way of upkeep from them in the future I'd be curious to know too..
hiking log & photos.
Ad monte summa aut mors
Top

I suspect a closure from 4-6pm weekdays will have little effect on our wildlflower viewing hikes. Thanks for the clarification. Some of the other postings made the closure seem more dire.

What Multnomah County (which did turn down my request for a property tax reduction...) is doing sending its "community service" detainees out to work for others is a mystery to me. However, I've seen similar crews tending the city-owned park in front of my house so maybe the county makes money on these "loaners?"
Top

I love that hike ,I did it in winter for the first time this year I liked better.

Were lucky it is a low snow year .

Thanks for the nice trip report and photos

The downhill of the mind is harder than the uphill of the body. - Yuichiro Miura
Top
Post Reply
6 posts • Page 1 of 1