A day off coincided with a good weather window, so I decided to try the Hardy Ridge Trail for the first time. Looking toward the ridge from I-84, it was obvious that the last few days of rain in Portland had become noticeable new snow on Hamilton Mountain and the ridge. Starting from the HUGE equestrian parking lot, the road was snow-free to the junction with the West Loop trail 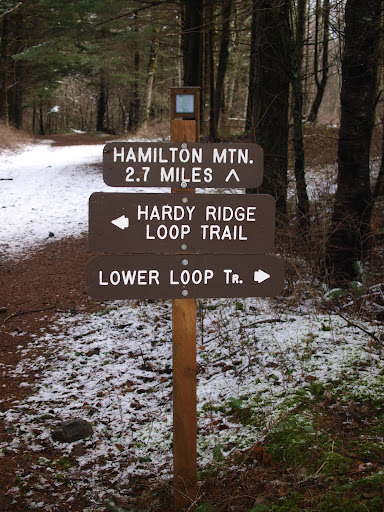 but began to appear soon thereafter 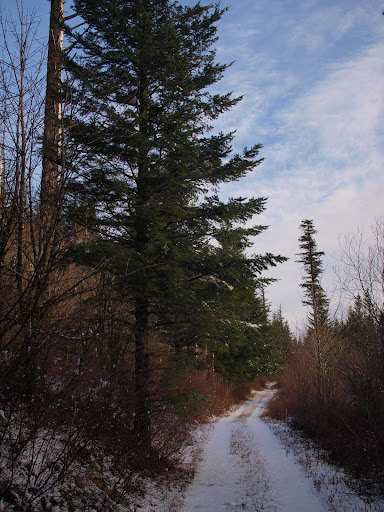 until, by the East Loop Trail, the scene was a real winter wonderland of snow-laden pines and a road with about 1’ on it. The snow never got deep enough anywhere on the whole route to justify snowshoes and with all the brush and trees to work around, they would have been more hindrance than help. 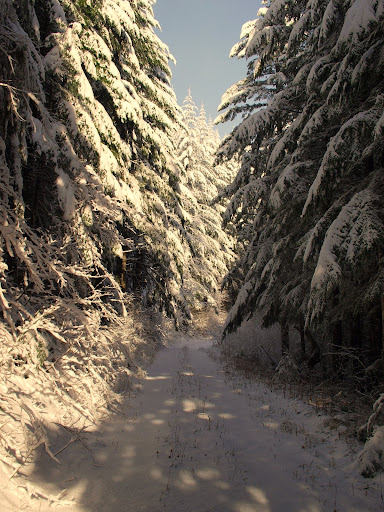 The sun was both loosening the snow from the trees (creating head-numbing showers of wet snow) and melting interesting shapes and features on every twig and branch. 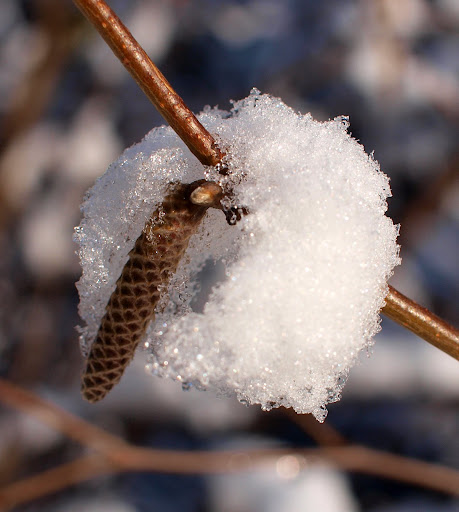 On top of the ridge, I was greeted with amazing views of Hood, 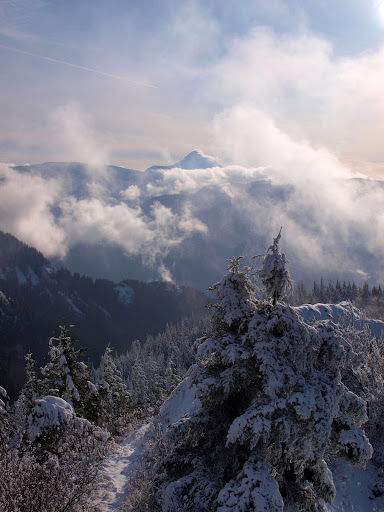 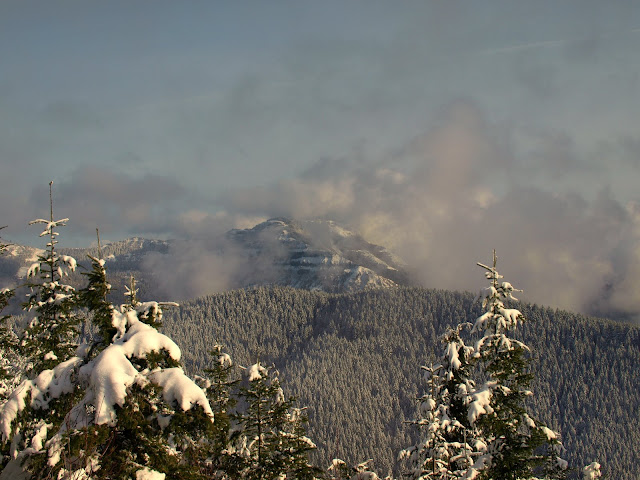 and both the summit and saddle of Hamilton. 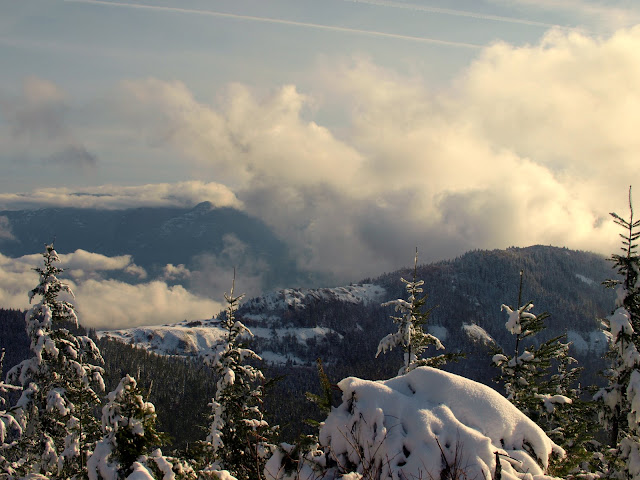 I’ve climbed Table and Hamilton many times but have never seen them from this perspective. The trail up the ridge to its high point at 2957’ isn’t as well defined as the West or East Loop trails but it wasn’t too hard to follow. I had to search for it hard only once (about midway between the trail junction and the top) where it was really obscured by snow-encrusted brush and branches. Along the ridge, there was another view of Table 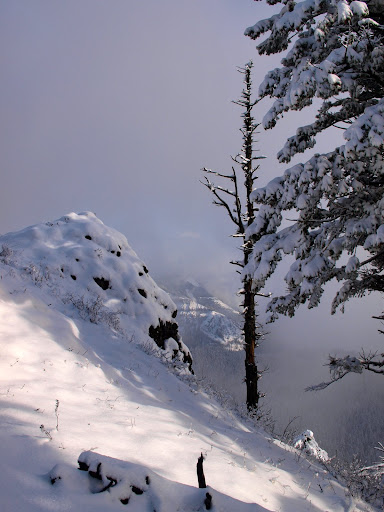 and finally one of the ridge’s summit. 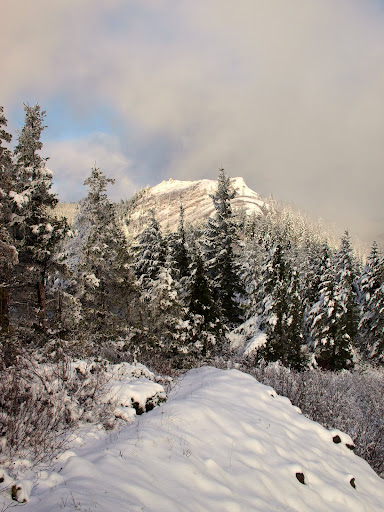 Even though the clouds were moving, the wind was totally calm on the ridge. When the sun was out, it actually seemed pleasantly warm, despite an air temp somewhere in the low to mid-30’s. However, by the time I got to the top, a large cloud had moved in and obscured the sun. 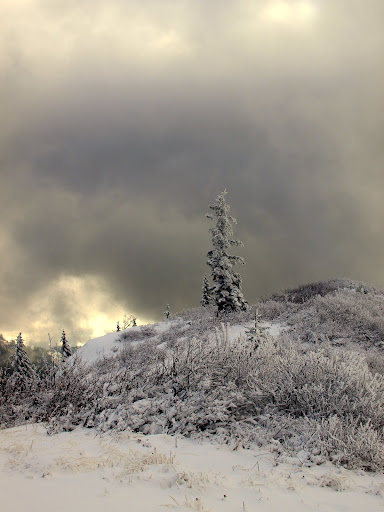 It was still possible, however, to get a view of the clouds and fog filling the river basin below. I’ve never seen clouds & fog in the Gorge from this height before and it was amazing. At times the fog almost looked like water, as though the Columbia had suddenly gotten much, much deeper. 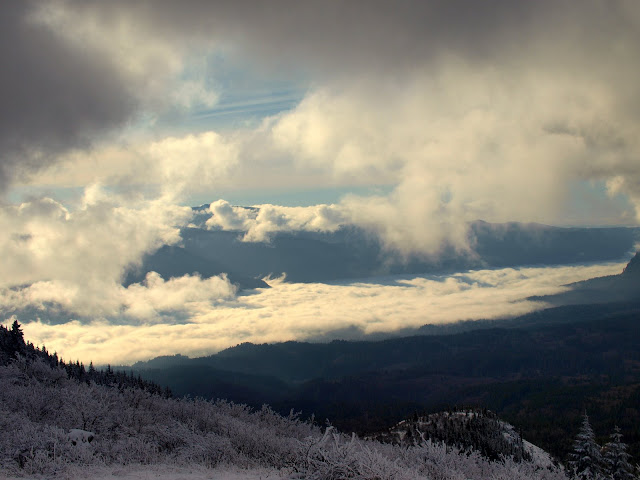 Following the trail through all that snow-drenched brush along the ridge had gotten me a little damp and chilled, so, there being no sun for warmth, I only stopped for a quick snack, then headed down. This is a pretty neat little trail – the snow was an extra thrill - that gives you access to some really different viewpoints.
Top

Great trip report and photos! I've only been up there once in the snow and didn't get any views at all. Must try it again.

So nice up there! I want to visit Hardy Ridge some day.
Top
Post Reply
4 posts • Page 1 of 1