Last Tuesday, I took the opportunity to hike the Trapper Creek trail to Observation Peak. That day it was clear and crisp but sunny – near perfect hiking weather. I don’t mind the extra 1.8 mi RT involved in starting at the lower “equestrian” trailhead off Forest Road 5401 as there is plenty of parking and you avoid having to wander past people’s cabins. From there it’s a fairly level tread over to Hidden Creek (where the creek running over flat exposed strata always reminds me of Utah’s slickrock country). 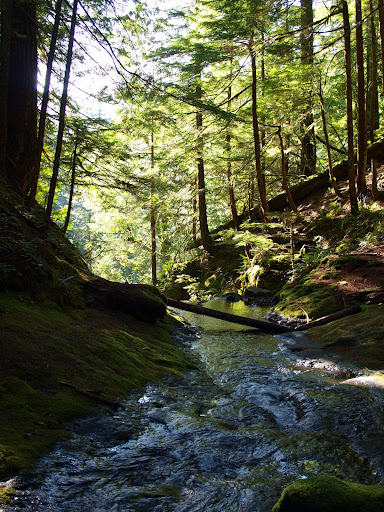 Fall colors were still in evidence but they had lost most of their luster. 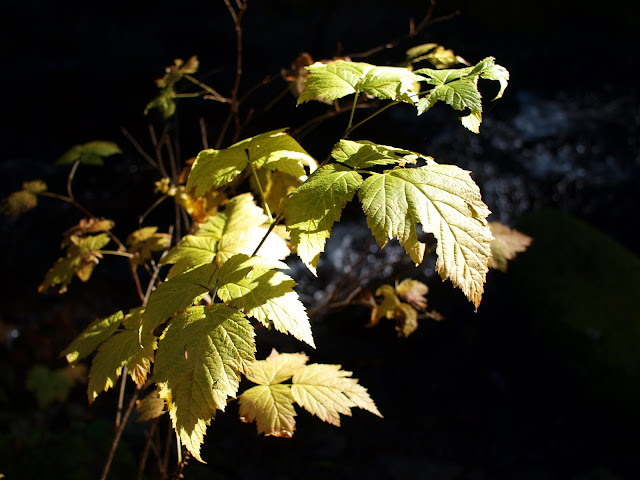 After a bit more level travel, I crossed Trapper Creek 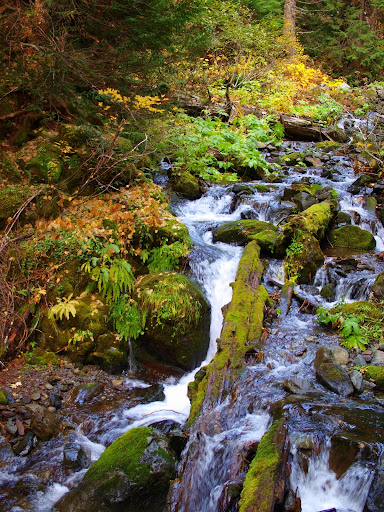 on a its rustic but solid bridge. 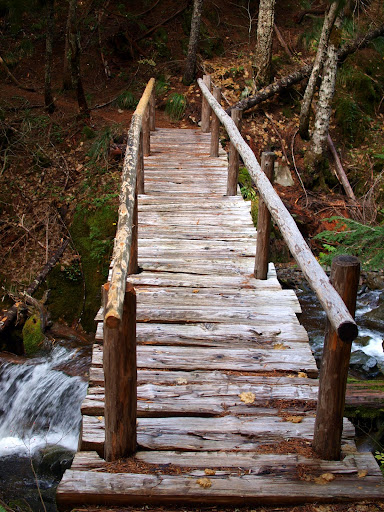 From there steeper and more protracted climbing ensued which was relieved some by a good view of the waterfall that seems to emerge without prelude from the amazingly steep west face of Observation Peak. 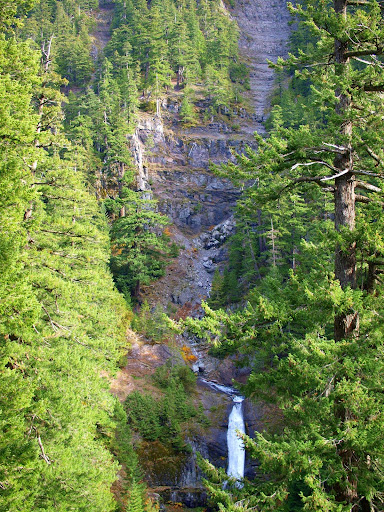 The climbing ended abruptly at about 3200’ and was followed by a gently rising stroll up the slopes to the ridge between Observation Peak and Sisters Rocks. Although the wind was howling along I-84, up here nothing disturbed the calm of upper Trapper Creek. 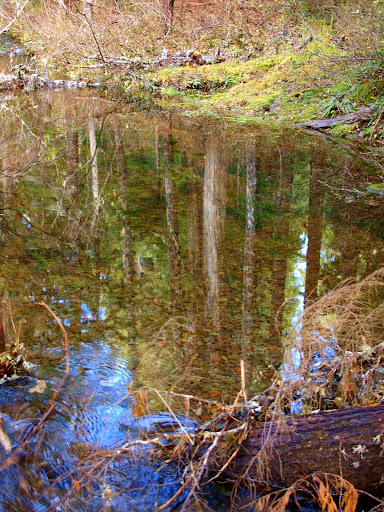 I like this hike because it provides a nice mix of hiking in valleys and big views. When I got to Observation Peak, all of the major peaks burst into view. 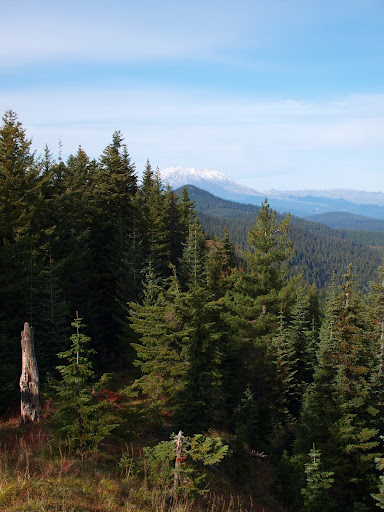 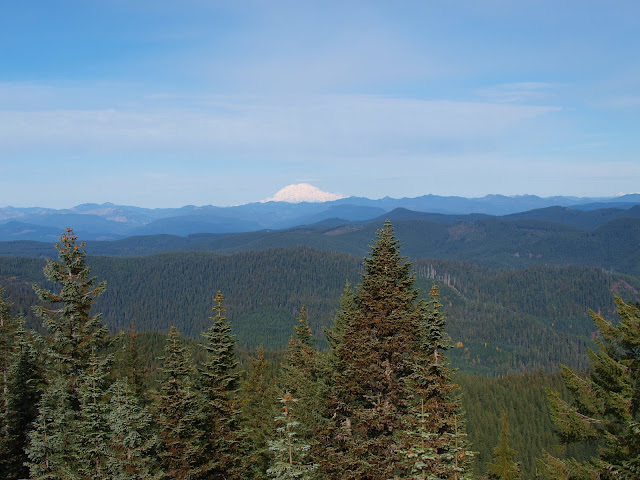 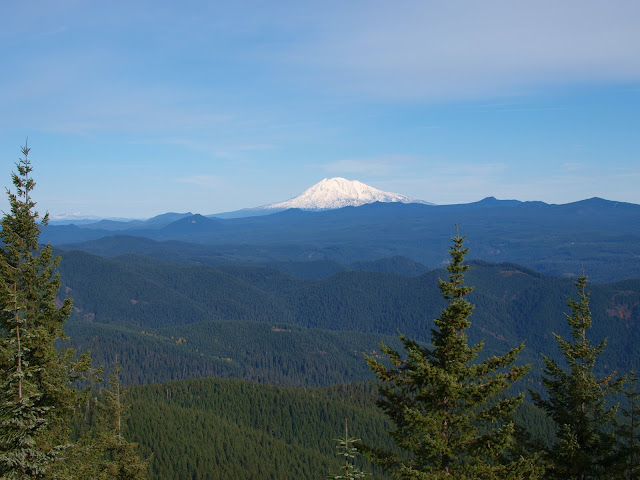 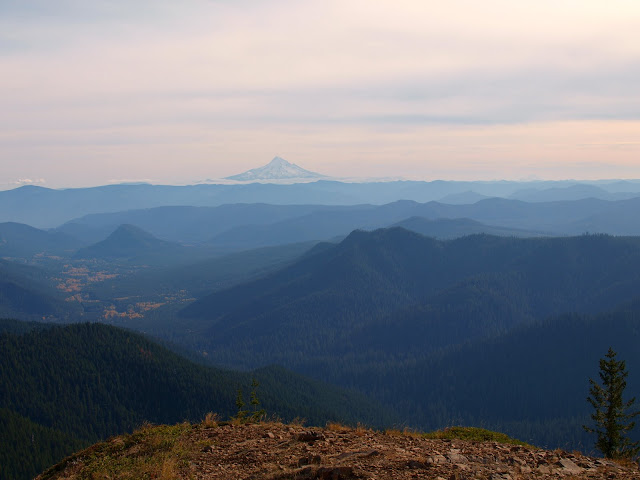 The other nice thing about this hike is that, after a fairly stiff climb up, the Observation Peak trail offers a steady, but not too steep (and therefore knee-preserving) way right back to the trailhead. On the way back, what with the muted, fading Fall colors and diffuse light of late Fall all around me, I realized that this was this year’s “last gasp of summer” hike. 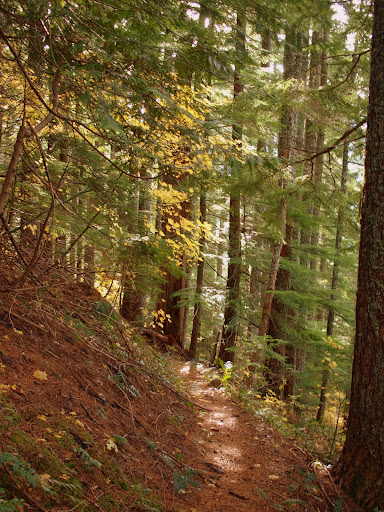 Since then, the weather has turned and Observation Peak, at over 4000’, is probably getting its first serious permanent snow of the season.
Top

Really enjoyed your report, TC is one of my favorite places to hike for the reasons you mention. Your photographs were excellent, especially the shot of Hood with the Wind River valley covered in muted yellow/orange patches and the intervening hills and small mountains standing out like a topographic map.
I'd love to get over there one more time before the really bad weather hits but my dog is undergoing a ligament operation next week so I'll have to cut my hiking for a while till he recovers.

Thanks. I invested in a new digital camera - an Olympus E-420. I'm not sure it made me a better photographer but it's definitely a better camera. And at just over 1 pound one of the lightest. Hope your dog (Bailey?) comes through OK and you can sneak in one more hike together before it REALLY snows.

Nice pictures and report. That's also one of my favorite hikes. I try to do one of the loops to the top at least once a year. Now is a really good time to see wildlife there as it has good remote low elevation area to spend the winter in. It looks like you made a good choice with the camera.
Luke

Common sense is the collection of prejudices acquired by age eighteen."
-- Albert Einstein (1879-1955)