The day’s goal was to cross the south fork of the Toutle River and get up on Castle Ridge on the northwest side of Mt. St. Helens. I set a hard turn around time. Where ever I was at noon was where I had lunch and then headed back. From the maps, that area is a maze of old Weyerhaeuser logging roads and it offers a chance for expansive views from the west. It did not disappoint.

I reached the Blue Lake trailhead at 0715, a little later than I wanted. There were 6 cars at the trailhead including mine but one was for someone camping there. It was 50 degrees and somewhat overcast although the forecasters promised it would burn off by 0900 (they were right). I took off up the Toutle trail. This part of hike is in the trees so there were only occasional glimpses of the world outside the forest.

Goat mountain from the trailhead

First hint that the Toutle is nearby

There was pretty heavy dew. The tread was very damp. I always start out slow on the way to my destination so I can look for animal tracks, flowers, berries, and anything else that catches my eye. Huckleberries were ripe which also slowed me down. I came across four canine prints, either a huge dog or I suppose a wolf, which seemed to cross the trail. They didn’t appear anywhere else on it.

The clouds burned off by the time I hit the Toutle river. I hadn’t crossed this obstacle before so I took my time, way too much time, looking for a way to rock hop. No luck. Not wanting wet boots, I waded barefoot across the widest, shallowest point. It was a nice chilly wake up. The climb out of the gully on the north side was fun.

After a couple of miles, near the top of the long, exposed climb out of the canyon, you come to the junction with the Castle Ridge trail. There is a sign although it is a little hard to read. The beginning of the trail really needs some TLC. The tread is eroded away in places which made for fairly tricky footing in places. I'm thankful for the kinnikinnick that I was able to grab at one point to keep from sliding down the hill.

If you squint really hard ...

Once you’re on flat ground, the trail is easy to follow. It clearly is not seeing much, if any, maintenance but the tread is obvious. After I got on the ridge, I thought I’d turn off onto the Castle Lake trail, not to go to the lake but to reach the unnamed peak to the SE of the lake. The sign for the junction is on the ground and badly weather beaten. When the USFS says the trail is unmaintained, it isn’t kidding. It wasn't very clear to start and I lost it after maybe 100 feet. It is completely overgrown for the first few hundred yards. I ended up on a small plateau from which I could look down and see the old logging road that makes up part of the trail. I could have worked my way down it but it was noon. Next time I won’t waste so much time at the river crossing or eating huckleberries. It was time to eat, tacos and a beer, take a bunch of pictures, and head back. The return was pretty uneventful.

Other than birds, I didn’t see any wildlife. Just the occasional footprint or pile of scat, mostly elk but possibly one fresh bobcat pile. There was plenty of elk sign, especially a trail that was at least as wide as the one I was hiking. I started thinking of it as the elk superhighway. I spooked something large in the brush between Sheep Canyon and the trail to the river. I didn’t catch a glimpse of it but it was crashing through brush pretty fast. The elk clearly like the Castle ridge area, a lot of scat, prints on the trail, and a heavy, musky odor periodically as I passed sheltered areas.

There are still a few flowers, but very few. Some paintbrush and asters. A couple of late lupin on Castle Ridge along with an astonishing amount of dandelion (at least that’s what it looked like). The kinnikinnick patches had a few berries.

There were few bugs. Just the occasional fly or bee.

The beauty of this area is that there are few people on the trails. Most of the time it felt like I was the only person in the forest. I saw two pairs of hikers on the Loowit trail. I didn’t encounter anyone else until I hit the Sheep Canyon bridge on my return hike. Then there were a couple of mountain bikers. After I crossed the creek at Blue Lake, I ran into several groups of people with small children heading to the lake with fishing poles.

A few obligatory shots from the hike ...

I've eyed that ridge a few times, but that's a lot of work. If Sheep Canyon TH was still accessible via car, it would be more reasonable. Also, a suspension bridge across Toutle would help.
Top

It was a lot of work. It is roughly 7 miles up to the ridge. It is backpackable but USFS only allows camping on the north shore of Cascade Lake, which makes sense because it looks to be the only reasonable source of water. Fisherman get to the lake from the north but I haven't found a route yet.
Top

This photo is fantastic. Next clear day I'm heading for this viewpoint. It has been on my list for a while; thanks for the reminder! 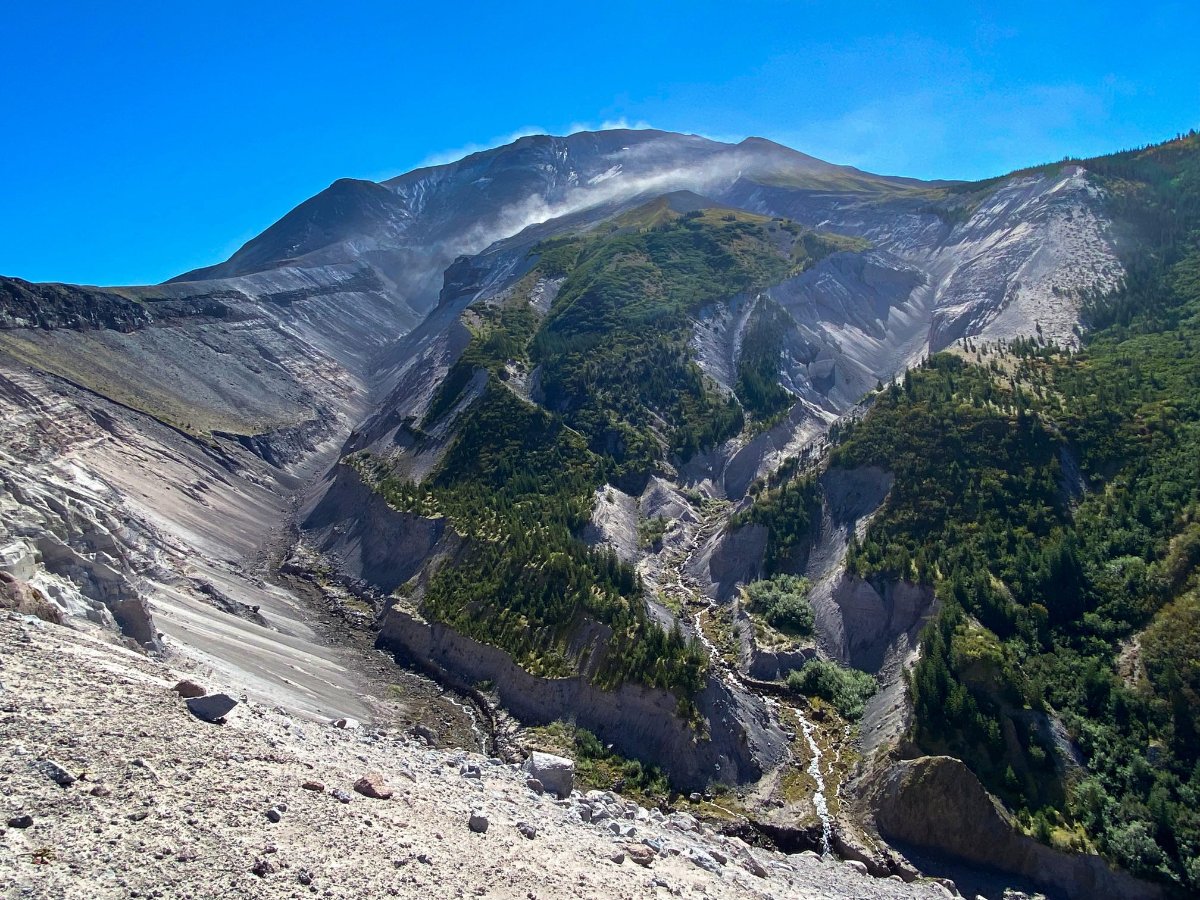 Cool! I went to Castle Lake the day before, by a different route than you and wondered about access from above. From what I've read the trail is in pretty bad shape, and the few reports I read seem to indicate it's best to just stay on top of the ridge or use the old road on the West side of the ridge.

Castle Lake was really nice for a swim.

Saw quite a few elks and followed lots of elk trails.

CFM- what route did you take? Been trying to find info on the Castle Ridge TH accessed via the 3000 road but have struck out.
Top

BeaverDawg wrote: ↑
September 8th, 2021, 6:28 pm
CFM- what route did you take? Been trying to find info on the Castle Ridge TH accessed via the 3000 road but have struck out.

My sleuthing took me to this point (loc: 46.226729, -122.273087) as the likely "Castle Lake TH" location. The CalTopoFS layer of Hillmap indicates trail 216A goes from my suspected TH to the 216G (Castle Ridge) trail, which intersects with the famous 216 Loowit trail near where it crosses the Toutle River. There's another 216A near Climbers Bivouac to confuse things more.

That area is so jumbled due to the eruption and years of erosion. I'm not surprised hard information is missing.
Top

I too have looked for a northern route. I can't find much online. The WDFW website says "Access can be difficult due to a closed road that leads to the lake." Perhaps Weyerhaeuser has gated the road and limited access through its permit system. The few references on fishing websites suggest that it was a pretty rough, long bushwack to the lake but I can't find any postings more recent than 2009.
Top

That's the trailhead I hiked from today. Other than having to dodge a couple of log trucks access was easy. Most of the way is good gravel, but it turns to moderate potholes to the east.

Attached is the GraphHopper route I followed.

Very cool. Thanks for posting this route. I had traced it on Gaia a couple of weeks ago but wasn't sure about access to the road, given Weyerhaeuser's permit program, or its condition.
Top
Post Reply
12 posts