There is better fall color on the east side of Hood right now, but the Dark Divide has its charms - and as winter has arrived early, you can get the place to yourself. My objectives were Tongue and Juniper pks - FS 29 is in fantastic shape (very flat and hard packed, almost zero potholes) but is closed at the 2904 junction for maintenance. FS 2904 is also in really good shape, with minimal bumps - just a berm every so often - all the way up to the TH at the saddle up top. I would think any passenger car should be able to do it if you go slowly over the berms.

I parked at the lower trail off 2904, below Tongue. Per the USFS map, this doesn't exist; Caltopo Mapbuilder layer shows it, but whatever it is, it appears to be abandoned. (The first part is an old road, and is probably the 604 road spur that shows up on the USFS map but is misaligned - it becomes a trail after that.) It was a bit overgrown and there was some blowdown, so my feet and pants got wet from last night's rain as I climbed towards the snow line (an auspicious start!). Up at the main 294 trail, I turned up the hill to Tongue. I've been meaning to get up here for years and would love to climb Tongue - it looks like a pretty simple scramble from the saddle up top, but the exposure and fall line are severe, so in these conditions, no way. My wet pant cuffs proceeded to freeze while I took pics, which was fun.

View south - the long right-trending ridge is the ridge coming off pt 5227, north of Juniper; I believe the rocky bump on the ridge behind and right is Langille Pk. After this, I retraced my steps to 294 and followed it down to the upper TH, then continued on the Juniper Ridge trail. It's in fine shape, though the dirtbike V-rut is annoying. (But they maintain the trails out there, so that's the trade off.) Things got increasingly cold and rimed until I reached the shoulder of Juniper, which was being plastered by a frozen wind.

False summit (Juniper is straight ahead but visibility was "not great") The actual peak of Juniper is a triangle of rock that juts out from the main trail. There appeared to be a user trail up it, though I couldn't completely tell due to snow. It was easy to walk up, though I kept back from the edge due to the wind. I only managed to get one pic at the summit before my hand froze. Time to head down. Trail back down below the summit. 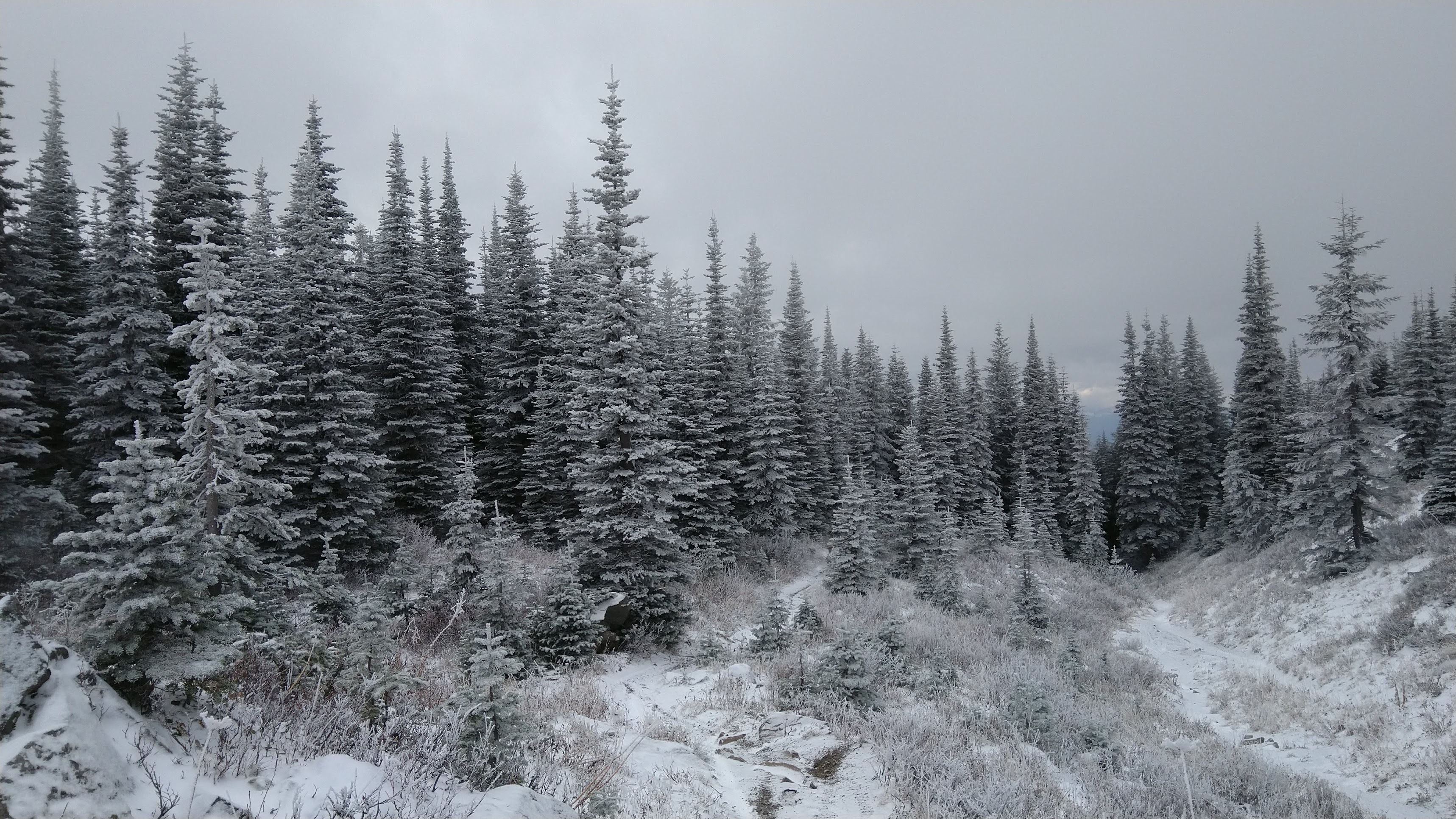 Things brightened a little on the way down once I dropped below the cloud layer. 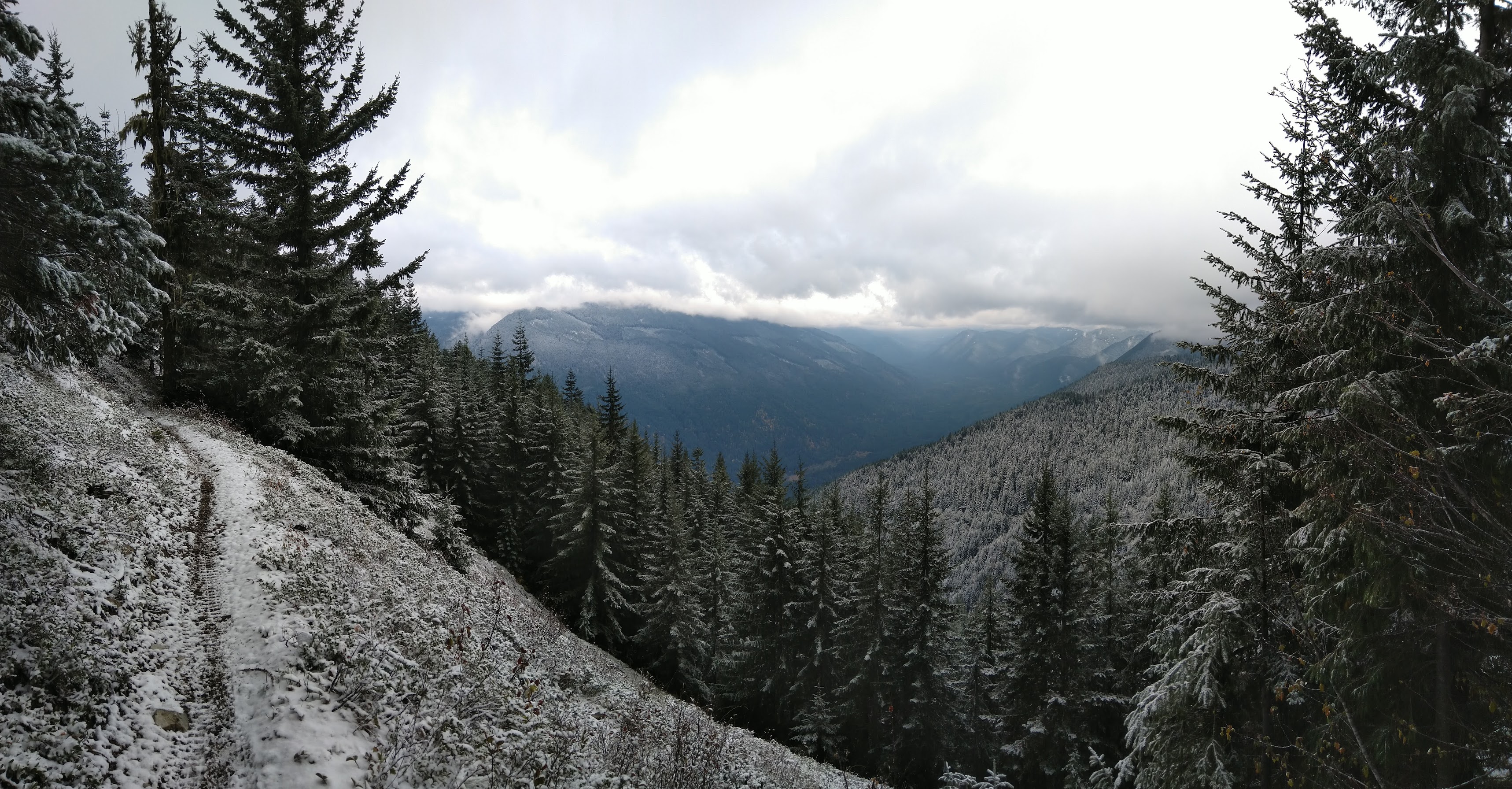 I opted to walk the 2904 road back down to the car rather than go back uphill and then descend the abandoned trail. (If I were to do this again I would probably skip that trail completely except in dry conditions.) I'm guessing at least single digit windchill up top; it was 36º when I got back to the car. Zero other people seen. Winter is coming...
#pnw #bestlife #bitingflies #favoriteyellowcap #neverdispleased
Top

good, it's now clear to go out in the wilderness, all the obnoxious people are gone until next year

retired jerry wrote: ↑
October 25th, 2020, 6:13 am
good, it's now clear to go out in the wilderness, all the obnoxious people are gone until next year

I've known Bosterson to be a little obnoxious, but I wouldn't mind running into him on the trail.

he's still out there so I must not have been referring to him, it's the zero other people he saw

nice walking around when there's just a little snow
Top

Never been up there but looks like a cool area. The pictures remind me of the Salmon-huckleberry wilderness in the snow. I love early snow hiking. Totally changes otherwise familiar trails, and in the case of the salmon-huckleberry the snow covers up all the shotgun shells and broken beer bottles

Thanks for the report!
Top

That's the second best thing about snow! Also can see lots of tracks when there's not. I see tracks of these three users every time I'm on Juniper Ridge trail.

BTW I have a love/hate relationship with the Dark Divide. I understand the concept of multi-use, but dirt bikers are everywhere in the GP and it would be nice if the DD could be one place you could go to get away from them. The roadless designation at least saved some old growth, but efforts to make it wilderness have always been thwarted. And the dirt bikers do NOT do a good job of maintaining the trails. Despite some preventive efforts in the past, erosion is rampant and walking in those narrow ditches is a PITB. Also, I often see fresh ruts off trail in the few scenic meadows in the area, as well as running up the side of Jumbo Peak where there is no trail.
Last edited by pcg on October 26th, 2020, 7:57 pm, edited 2 times in total.
Top

Nat, Thanks for the TR and pics. Brings back good memories of a hike up there from four years ago.

Good idea to not try that final pitch to the summit of Tongue in those conditions! I seem to remember one time with you when you were half way up the rabbit ears in icy conditions and voiced concern about getting back down in one piece.

Tongue Mt. is spectacular in clear conditions. That rock face has a barely discernable switchback trail on it but then one must ascend a narrow ridge to the small summit plateau. A slip on either would not turn out well.

Here's a view south from near the top looking down on that final ridge:

Looking up at it:

The summit has a nice area for a camping spot, too:

Cool pics, DN! I spied the series of ledges that looked like a decent route up the face of Tongue, but given the conditions, I opted to save that for a dry day earlier in the season. I hadn't realized there's a little ridge up there though! That's also quite the summit bivy spot - now I have ideas...

(PS - the Rabbit Ears was in a February, I think? But it wasn't icy - it was loose! I was gripped trying not to actually pull on any of the portable holds. That was right before Ben and I began venturing into Nesmith territory, and I hadn't learned yet that the Gorge isn't actually made out of real rock...

(PS - the Rabbit Ears was in a February, I think? But it wasn't icy - it was loose! I was gripped trying not to actually pull on any of the portable holds. That was right before Bend and I began venturing into Nesmith territory, and I hadn't learned yet that the Gorge isn't actually made out of real rock...

My mistake about it being icy - you were awesome up there though! March 2nd, 2013, to be exact. A day to remember for sure! We all got going while it was still dark out: You, Brad, Elizabeth, Peder, Steve, Sean, Eric and me. Peder wrote the TR and we all added to it. It's still a good read and most of the links and pics are still up. There's a great video Eric made and the link still works. Oh, for the good old days!!

dn
"Everything works in the planning stage".
Top
Post Reply
10 posts • Page 1 of 1