Back in ’85 and again in ’97 I hiked the PCT from the berry fields to the Sawtooth Mt. Trail to climb Sawtooth Mt. but I’m not entirely sure I managed to reach the highest point on the summit. Back then I was more interested in simply hiking and running as the goal rather than logging the summit of a peak. Fast forward to yesterday, add in the beautiful fall weather and foliage and a desire to make sure I really got to the highest point, an I-phone camera to prove it and you get this TR.

The PCT is in fine shape but the Sawtooth Mt. trail took a major hit from the recent windstorm. Lots of trees down and lots of big ones that require some minor detouring. About 35 trees down in just the first mile or so. Some are only minor nuisances but many will take some serious work to remove.

The Smoke that came in overnight from the CA wildfires obscured the upper parts of the major peaks but the lower atmosphere wasn't too bad.

The view west, and Lone Butte from the high point of the trail:

Once at the high point of the trail, I climbed steep goat trails to a saddle on the ridge line and attempted to follow it to the highest of the summit rocks. Following a series of sketchy traverses, I got to a point where I chickened out and had to retreat back down to the trail and try a different tack.

The scenery was great - the footing, not so much:

I chickened out here. The actual summit is hidden behind this jumble of rocks. Hiking alone, a slip here would not have worked out well.

My second attempt was to get closer to what looked like the highest point and go more or less straight up to try to find a way. The terrain was not nearly as steep , at least at first, and got me directly below the summit blocks. I found a steep cleft that went to within a few feet of the highest point and finally made it to the top.

The cleft I used to get to the top of the ridge:

View south from the summit:

I had lunch and as I got ready for my descent I heard a couple of voices directly below me. I hadn’t seen anyone else all day so this was a surprise. I peered over the edge and spotted a man directly below. He asked, how did you get up there? I replied, “more or less straight up from where you are now.”

I downclimbed to him as his climbing partner continued up and when I finally reached him, a familiar face appeared: Craig Gwydir and his dog Rigby! We chatted for a few minutes and then continued on.

Once back on the trail, I went south to the junction with the PCT, since I didn’t remember ever hiking this section before. One at the PCT, I made my way back to the TH on road 30 for the drive home.

A view on the trail as I hiked south to the PCT junction. The camera didn't pick up the reddish sun too well but you can see some of it in these views:

A view of the reddened sun as I drove home:

Don Nelsen wrote: ↑
October 1st, 2020, 9:32 am
I chickened out here. The actual summit is hidden behind this jumble of rocks. Hiking alone, a slip here would not have worked out well.

I remember that little ledge you used to get up to here - I did the same thing last fall. (I have almost this exact same photo, as well!) From this spot, you can go straight up the rocks along some ledgy cracks (it's not as steep as the photo is making it look), and then you go up through the little vertical split in the summit block and pop out on top. I can understand not wanting to continue into that solo, though. Where is your actual ascent gully relative to this pic? Under the left part of the summit block?

Bummer about the haze. This is the view I had up there last fall: 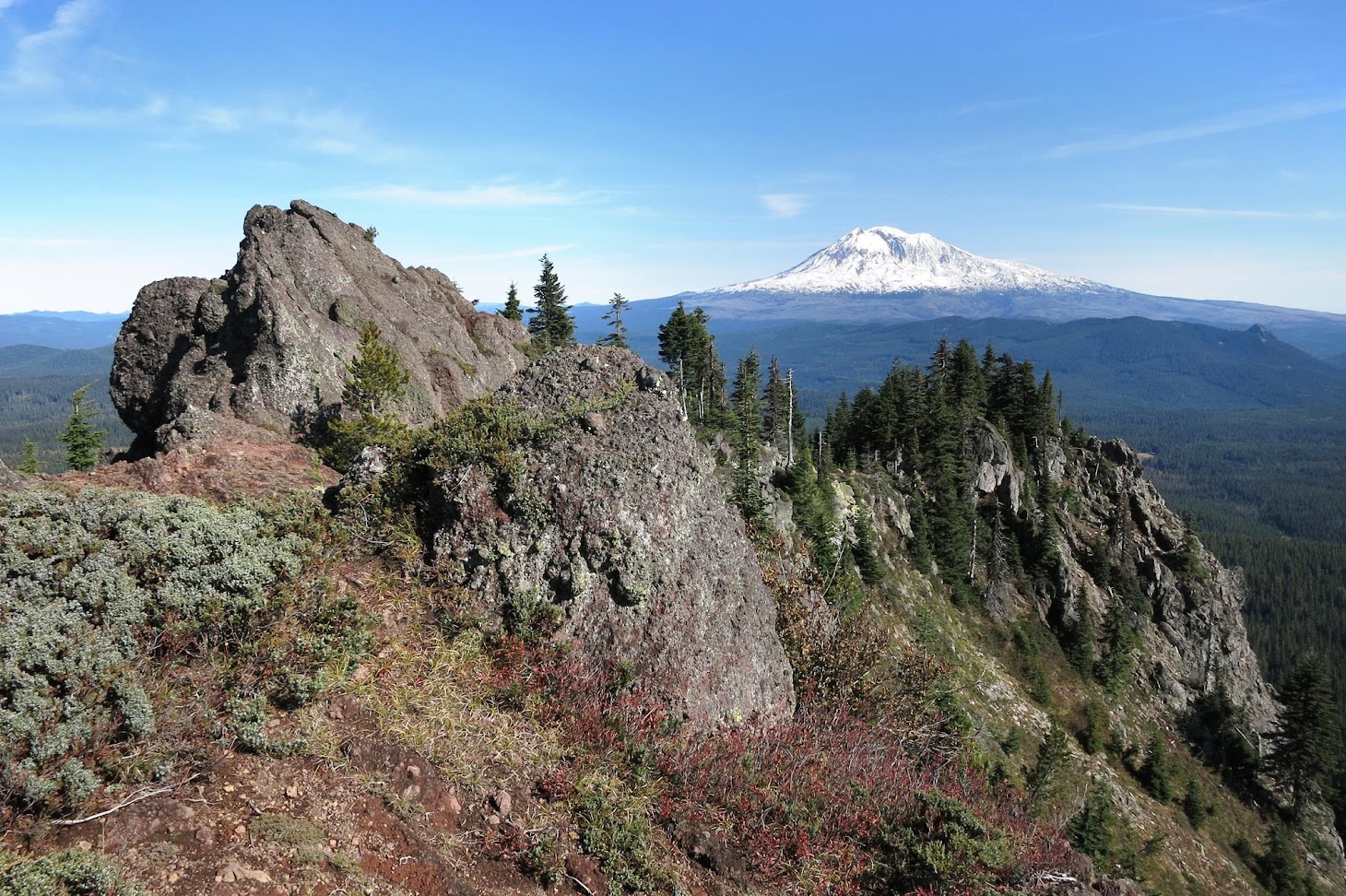 I camped at Rock Lake last night and when hiking out the East Crater trail this morning, there was a Forest Service duo with a crosscut saw. So that's not where they would go in to cut out the logs you saw in this report, but I guess there were reports of some farther south, near Bear Lake I think? Sounds like they will be clearing out these logs in short order.
Top

...Where is your actual ascent gully relative to this pic? Under the left part of the summit block?

Bummer about the haze. This is the view I had up there last fall:

Nat, thanks for the comment - and the much better pic of Mt. Adams!

The gully is a few feet south of the summit block. Very steep, much steeper than in the photos, but excellent holds and narrow enough that you can grab holds on both sides at the same time. I found a different way down a dozen feet south of the gully that might have been even easier to upclimb. The views are great up there, probably the best in all Indian heaven so I may go back when the skies are perfectly clear again. Maybe next week, I'll decide then.

It was good to see you Don! Having only had seen only 1 person that day, I think we were all a little surprised to run into each other on a remote offtrail summit.

Likewise Craig, both to see you and the surprise at doing so. Also, Rigby is an amazing dog, to say the least. I was even more surprised to see him.

dn
"Everything works in the planning stage".
Top
Post Reply
6 posts • Page 1 of 1