I've seen the top of Chinook 180B when hiking the north side of Silver Star, and I thought I had hiked the trail down to Tarbell, but after looking closely at map and aerial pics I started to question whether I had ever done more than a quarter mile down to a viewpoint. So today I parked at the Tarbell TH (north end of the Tarbell loop) and headed up, with plans to meet the Chinook junction and follow it up to Silver Star.

I started in the light because I expected the trail to be tricky to follow (road crossings, clearcuts). It was super easy, very well marked. But I was happy to get a late start, as the clouds were swirling through the flowery openings, and the sun was cutting through just a bit as the clouds parted now and then.

I made pretty good time to the Chinook junction. I laughed when I saw it. It's not signed at the top, and it shares its route with a road at one point, and it's not on Google Maps. This all made me think the junction would be faint. Nope, it's very well signed.

I started up Chinook, and explored some of the roads it crosses along the way. I kept notes of where I had been, so that on the way down I could make sure I explored every bit of road/trail.

One of the reasons I wanted to hike Chinook was because aerial photos shows it runs through some clearings, so I hoped for good scenery. But the clouds had started to drop and thicken back on Tarbell, and on Chinook I could see generally just about 20 or 30 yards most of the time, although there were some clearer moments. It seems to be promising. Flowers were thick, and I know there are views of Silver Star's north ridge. I want to go back and have another look on a clear day, hopefully when flowers are still blooming.

I arrived at Silver Star trail early, and wanted to kill time in hopes the clouds would burn off, so continued to Ed's Trail, and up to the top of SS. It never cleared at all, and by the time I returned to Chinook I had never seen more than a few yards ahead. I wasn't disappointed; it was better than sitting on a rock for an hour waiting for the clouds to dissipate.

A "secret" meadow I found, but then discovered it was just a few yards away from the Chinook trail. So yeah, not much of a secret.

The world really doesn't need another pic of Moorhead Arch, but I like how it looks in the clouds, without all the clutter in the background.

Random find. I suppose there used to be a benchmark here. Remote place, not close to a high point.

Open Street Map, because not shown on Google. I followed every trail/road between the blue X's. I didn't show the entire route from TH to summit because the rest of the hike is very well documented.

I went back to Chinook to see how things would look without clouds. Started by going a little further on Tarbell this time, to Hidden Falls, and a little more, to the switchbacks up the next old clearcut, which was flowery and more scenic than expected. Then backtrack to Chinook, and up.

When I came to the first trail/road crossing on Chinook, I took the road. It was the fastest way up to Silver Star, and I wanted to save the longer easier Chinook for the afternoon descent. I knew the immediate scenery would be less interesting without fog, but that's okay. With better visibility today, I could get a better feel of how everything fits together (roads/trails/ridges/creeks/etc). That was exciting, but I also feel like I stripped away the sense of wonder I experienced a couple days ago, the fun confusion, the mystery of what was beyond the fog. Still, it was a fun rewarding pair of hikes.

When I arrived at Silver Star's north ridge, I wandered, dawdled, worked my way up. At the minimum, I wanted to get to the highest viewpoint (4200') on the crest before the descent to the forested saddle. I thought I might also follow Bluff trail to the Starway junction, but it was just too damn hot (my hottest hike this year). I wasn't willing to turn back before noon, so it was good luck that I arrived at my goal at 11:57. I'm not sure I've been to that point before. If so, it was decades ago. Great overview of SS's N ridge from there, so well worth the effort.

Not all fun and games: In addition to the oppressive heat, a couple other gripes.
1. First sunburn of the season. Because of low elevation and lack of snow, I didn't even think about sunburn risk.
2. Lost a tire on I-205. I suspect I'll end up buying a new set tomorrow. 2020 is not turning out to be a prosperous year!
3. Had to re-route to avoid protesters. Heard about it on the radio though, so I was grateful for the warning.

This meadow was on my to-do list. It was surprising in many ways, but perhaps the biggest surprise was that I could see Portland! This was pretty low on the mountain, so I didn't expect a clear line.

I'll tell my friends I got to the top, and they'll be so impressed. Please don't tell them it's easier than it looks.

Bosterson recently reminded me that imperial stouts are well suited for this season, so that's why I carried this beast. Wait, I may have gotten that backwards...

There's my main goal for the day (described in narrative above)

Almost to the top... 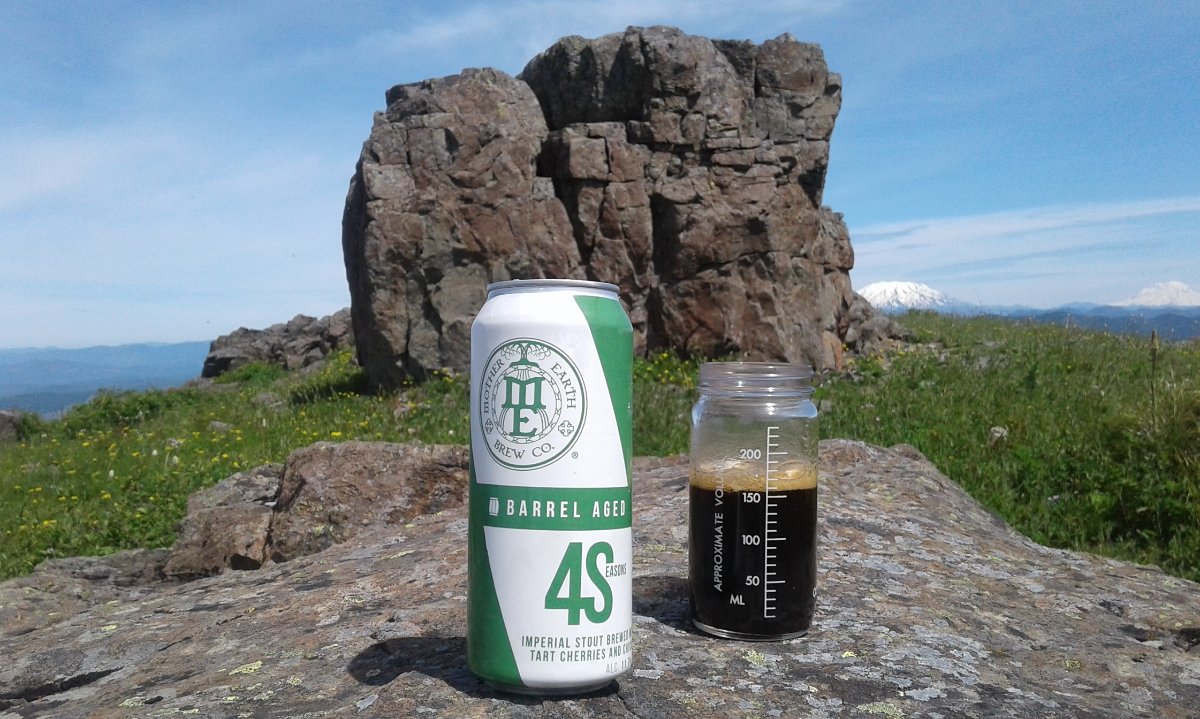 Bosterson recently reminded me that imperial stouts are well suited for this season, so that's why I carried this beast. Wait, I may have gotten that backwards...

Well, it is cherry season...

How do you "lose" a tire? Like, you left an extra 5th one on top of your car and it fell off when you drove away? Also, should we be worried that you apparently no longer have a job during the week?

No, not literally lost. A puncture that probably would normally be repairable, but it was very hot when I was able to get to the shoulder. I wonder if it's safe to repair.
Anyway, I am thinking about getting a full-size spare setup, and go with 5-wheel rotation, but I'm not looking forward to trying to find a used wheel (I'm sure the dealer cost would be outrageous).

Maybe if everybody worries really hard for me, I'll get a job.

Re: Chinook 180B from Tarbell to Silver Star

I was in the neighborhood Tuesday with a few hours of light left, so decided to stroll up Chinook to see it in the snow.

I've never* seen another person on Chinook, but yesterday it was crowded, on a winter weekday. Everybody I saw had treking poles, and either spikes or snowshoes. All I had was a bike, so I was at a bit of a disadvantage. Everybody was using the steep short jeep trail, and I did the same, but on the way down I "rode" my bike through virgin snow on the trail.

It was below freezing when I returned to my car, but it was balmy up above, no wind to speak of, a perfect winter day.

*edit: not true, my memory lapsed, see post above