Spent a couple chilly nights on the north side of Mt Adams July 5-7. It was overcast each morning and very chilly, but eventually it burned off and the afternoons were cool but pleasant. We did short backpacking mileage each day and then nice dayhikes from camp each afternoon. The cool temps meant that we had some interesting cloud formations on this trip.

We hiked up the Killen Creek trail and had some nice wildflower outbreaks. Here is a field of avalanche lilies

The trail had a number of reroutes since the last time I hiked it a few years ago. Here is the old eroded section, filled in with sticks to slow the fast moving water

And here is the new reroute. I think the old 3.1 miles for this trail is now closer to 3.5 miles up to the PCT

The north face of Mt Adams is a unique profile

After setting up camp behind an unnamed pond a quarter mile west of the Killen/PCT junction, we went for a hike up to High Camp. But rather than using the standard trail, we found a cross-country route over towards Adams Creek. We just looked on the map, the GPS, and with our eyes in front of us, and chose a spot to head up. Mostly it was grass hillsides, but at one point we came over a rise and found the most intense patch of indian paintbrush that I think I've ever seen.

As we continued up, we went past this pond on the western slopes below High Camp

Looking the other direction (north) we saw the other part of High Camp and many dozens of miles distant, Mt. Rainier was partially in the clouds

That evening as the sun set, cloud layers and both low and higher levels made for quite the scene

The next morning it was completely socked in and in the low 40s, but patches of blue started showing pretty early and by 9am, Mt Adams was mostly clear

That day we hiked east on the PCT, past Killen Creek, and turned right on the Highline Trail to gain a little more. After 5 miles we set up camp at the treeline and the edge of the Muddy Fork debris basin, with some clouds lingering on the mountain

That afternoon we set off on the Highline Trail for 2 3/4 miles up to Devils Garden at 7700 feet. You have to cross two forks of Muddy Creek. The second and upper one is usually a challenging rock hop or wade, but this early in the season, it was easier

Here is a place you wouldn't want to cross the creek

Just before Devils Garden we saw two mountain goats. They weren't moving very fast. When we stopped, they stopped and laid down in the snow.

The lowland suckers were still pretty much socked in that day at mid-afternoon, but we could see Rainier above the clouds

Up above, Adams dominated over the tundra fields of Devils Garden

The next morning we awoke to completely gray skies and temps in the upper 30ss. It's July, should be warner than this. We headed down the Muddy Meadows trail and while the views of Adams from the meadows are usually great, today we had to make do with the amazing lupine displays. We then used a couple of lowland trails for about 2.5 miles to connect back to our car at Killen Creek.

My trips at http://www.deanmyerson.org/photoindex
Top

Thanks for sharing Dean. Looks lovely. I always feel especially lucky to be above the clouds like that.
Feel Free to Feel Free
Top

Thanks for the report, Dean. Glad you were able to get up in the area so early!

Any report on mozzies or any other annoying bugs? I might be heading up to Devils Garden this weekend and just wanted to know what to expect.
instagram: @robo_remy
Top

Peak bugs was down around 5000 feet. We had some bugs at our first night's camp, maybe around 5900 feet. None at our second camp at about 6300 feet, and none while we were hanging out at Devils Garden. But they are working there way up and it is a bit warmer. About the worst bugs I ever had in my life was at High Camp many years ago during an August heat wave. Killen Ck and Foggy Flats can both be terrible if you get the timing bad.
My trips at http://www.deanmyerson.org/photoindex
Top

Thank you for the heads up!
I remember camping one Labor Day weekend about 10 years ago at Foggy Flat, and the mosquitoes were the worst I have ever experienced.
It's such a gorgeous area... one of my absolute favorites... but the bugs can sometime make the whole place uninhabitable.
This weekend will just be a long day hike (conditioning for the Wallowas later this month) so as long as we keep moving I'm not too worried about it.
instagram: @robo_remy
Top

Stunning photos! Sounds like an ideal time to be there.
Top

Excellent trip, report, and pictures, Dean. I've got to knuckle down and get over to see some of that in person soon.

Interesting that it was so cold for you, and cloudy. I was in the Goat Rocks (east side, Conrad Basin area) at the same time (4th-6th), and it was 49 in my tent both mornings. It was partly cloudy there with a bit of haze everywhere, which made it tough to get a good view to Adams: 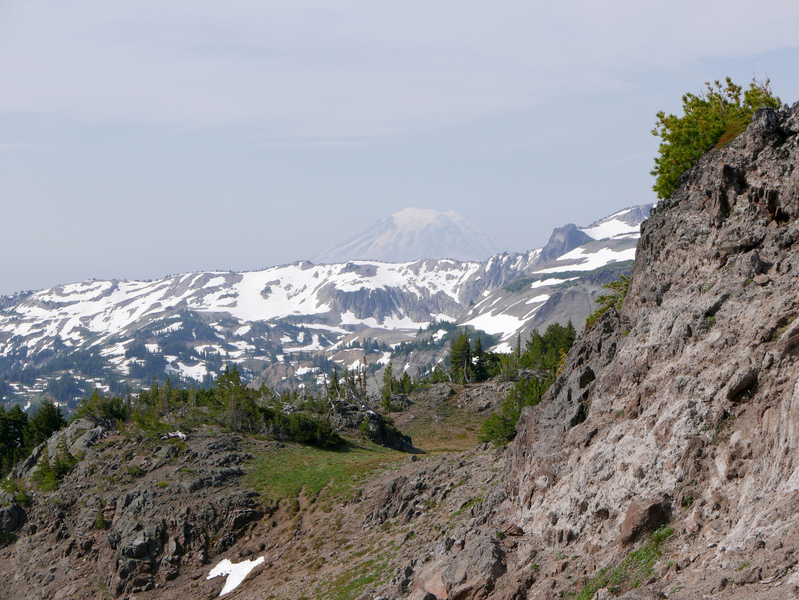 TB - A short distance can make a huge difference in the weather, when that short distance is on two sides of a crest. Our second night's camp was about where the edge of the clouds hung out one day. I've seen the same on Hood: McNeil Pt in clouds and Cooper Spur in the sun. Go east for sun!
My trips at http://www.deanmyerson.org/photoindex
Top

I like the rockfall from that glacier flowing between the two lobes of Mt Adams. Adams glacier I believe.
Top

One of our favorite areas and started going there back in 1966. Good thing people in Seattle do not know about the area.
Top
Post Reply
14 posts