I hiked to the top of Archer Mountain (a few miles west of Beacon Rock, on the Washington side of the Gorge) yesterday. Before I say anything else, I should add this important disclaimer:

The Columbia Falls Natural Area Preserve is closed to the general public, so the ONLY legal way to get to the top of Archer Mountain is to park at the end of Smith-Cripe Road and go east toward the summit; this involves some scrambling up some steep cliffs (and scrambling down on the return). If you go west from Smith-Cripe, you'll get to the NAP boundary as soon as you're at the elevation of the talus fields. If you park near Duncan Creek and walk up the powerline road, you'll enter the NAP when you head into the woods to go around the basalt cliff with the little waterfall.

I went up from Duncan Creek, so I admit that yes, I was walking where I wasn't supposed to be. But I didn't know that. I was always under the impression that only the valley immediately below Archer Falls was off-limits, but an e-mail exchange today with the Natural Areas Manager of the Pacific Cascade Region of the Washington DNR confirmed that the entire preserve is verboten:


Carlo Abbruzzese wrote:Columbia Falls NAP is a site that protects habitat for several rare plant and animal species, and rare plant communities. This is one of the more sensitive Natural Areas in the state and because of that we are careful about what uses the site can sustain while protecting these one of a kind resources. One of the biggest threats to these sites are weeds, and there are several relatively new weeds (shiny geranium, garlic mustard, and false brome to name a few) moving into the Gorge that would seriously threaten the rare plants at Columbia Falls.... Currently, access to the entire natural area is limited to guided tours and scientific research. My understanding is that there are no authorized trails on USFS land surrounding the NAP.

Carlo Abbruzzese wrote:If it weren’t for some of these new weeds, I would be much more open to trying to find a way to allow trails without harming the resource. We have been fighting one of these weeds, shiny geranium, at a site closer to Washougal and we’ve spent lots of time and money and have determined that we can’t win. It’s much worse than other weeds in that it will invade undisturbed areas of forest and dominate the forb (wildflower) layer. It’s not hard to kill with herbicide but it can reproduce 3-4 times a year and is spread fairly easily on animals and humans (shoes and socks).

So that's a bummer.


The other thing I wanted to point out is that the Eagle Creek Fire sent some embers over to Archer last fall, and while 95% of the hike was unaffected, the slope from the summit down to the southeastern viewpoint got burned pretty badly. Most of the conifers are still alive, but a lot of the ground-cover vegetation is gone, and the newly-exposed soil is drying out and eroding. The final traverse over to the viewpoint was pretty sketchy; if you're not OK with walking on crumbly 45° side-slopes, you won't enjoy it.

[Not fun to walk across]


The viewpoint ridge itself is rocky, and it weathered the storm pretty well, although traversing next to the basalt blocks to go out to the very end felt more adventurous than I'd have preferred. And those charred trees leave black marks on everything... my backpack is filthy!

[For scale, you can see my blonde friend (from the waist up) on top of the rocks]


Some semi-scorched earth is visible behind this flower:


The actual summit of Archer Mountain had a lot of deciduous trees (which don't take as kindly to fire as Douglas-firs), and they're pretty much toast. The perennial plants are happy about the newfound summer sunlight though:


So, to reiterate: you CAN reach the top of Archer Mountain legally, but it's a rough trail, and you can't really do a loop. (I haven't done that route personally, and I'm not sure whether it was also affected by the fire.)


Here's a happier picture to finish things off:

[Phlox on the edge of a very tall cliff]

Thanks for the report and reaffirmation the closure. I did that loop a number of years ago and couldn't tell what the status was. I emailed Mr. Abbruzzese, but he never replied. Good to get a definitive answer on that.

I have shining geranium plaguing my yard now, so I understand its resilience.The false brome is potentially a worse problem.
Top

I cringe every time someone posts about Archer mountain. Yes I it is exciting and a magical place. But the more people that go there the sooner it will all be closed down.
Bella
Top

Bella wrote: ↑
July 1st, 2018, 5:29 pm
I cringe every time someone posts about Archer mountain. Yes I it is exciting and a magical place. But the more people that go there the sooner it will all be closed down.

That's why I tried to make it very clear in my post that you're NOT supposed to go there. But regardless of what we do on the Internet, the lack of real-world signage is a big problem.
http://adamschneider.net/photos/
http://www.gpsvisualizer.com/
Top

Carlo Abbruzzese wrote:... We have been fighting one of these weeds, shiny geranium, at a site closer to Washougal and we’ve spent lots of time and money and have determined that we can’t win. It’s much worse than other weeds in that it will invade undisturbed areas of forest and dominate the forb (wildflower) layer. It’s not hard to kill with herbicide but it can reproduce 3-4 times a year and is spread fairly easily on animals and humans (shoes and socks).

Shiny geranium is the most aggressive weed I've ever encountered. I'm guessing that somehow my walking through it in the Gorge is responsible for my inadvertently transferring it to my property. The good news about this plant is that it is very easy to pull up, roots and all, if the soil is not hard or compacted. The bad news is that it propagates like crazy, seemingly faster than you can pull it up. Despite my best efforts, I have lost the battle on my property and all I am able to do now is keep it out of certain areas by constant weeding. I now have about an acre that is infested with this stuff. It actually looks rather nice, but it crowds out everything else. If you see this starting on your property, take immediate action to eliminate it.
Last edited by pcg on July 1st, 2018, 9:16 pm, edited 1 time in total.
Top

I was forwarded this map today. I have never heard of this closure and I have spoken to the WA DNR guy that manages the state land a couple times. once since the fire... Now what got scorched was the safety zone the DNR fire crew had up hill from the PG&E gas line. I have pics of that burn over from Feb 18 when I went in. We got lucky the fire spotted above them. now the burn was intense. However, new trails stay out of all the burn. and only the east buttress smoked. looking at this map. everything closed was OUTSIDE the burn? Some of this closure above the BPA service road, in a clear CUT for gods sake??? that clear cut really mudded up Dunkan Crk last summer... I have known it is closed in the upper part of the canyon. for a salamander. what lives up in those rocks is the very last mass herd of low elevation Pika I know of. so I stay out. Now the reason I know of that slow lizard closure is I found a sign on a tree. not on any trail, below the old homestead foundation. so I called the number posted. that was DNR and he told me the closure is not enforced. in part because the USFS will not close the land... anyway I hike Archer all the time. I have no idea who is cutting entire new trails that skirt state land. I owe them a beer... The new bridge up the east flank is great. and stays way far away from any burn. as for wild weeds. it is a homestead it has apples, chestnuts, hawthorn and other invasive species that go back to the first homestead. Then it was a hippy compound for about 20 years in the 60-70's...

So I was out on Archer today for the first time ever, I've been working up the nerve to try it for years now and I was intrigued by the "new trails". They do indeed avoid the burn almost completely, but it gets confusing near the summit.

Someone has put signage at the beginning of a new path down to the creek, as well as made a fairly well constructed footbridge.

I originally walked past the stated beginning of the described Archer trail because, never having been here before, I wasn't sure if that was the right path. I kept going on the road and came across this cute little sign. The trail was easy to follow down the slope, switchbacked a couple of times, and then there was another sign right next to a big stump, which sat between this new trail and the old roadbed. Shortly after that I found the new bridge, which has two logs securely strapped by a metal bar and a well-made handrail. The trail was super easy to follow this whole time despite the leaves on the ground. 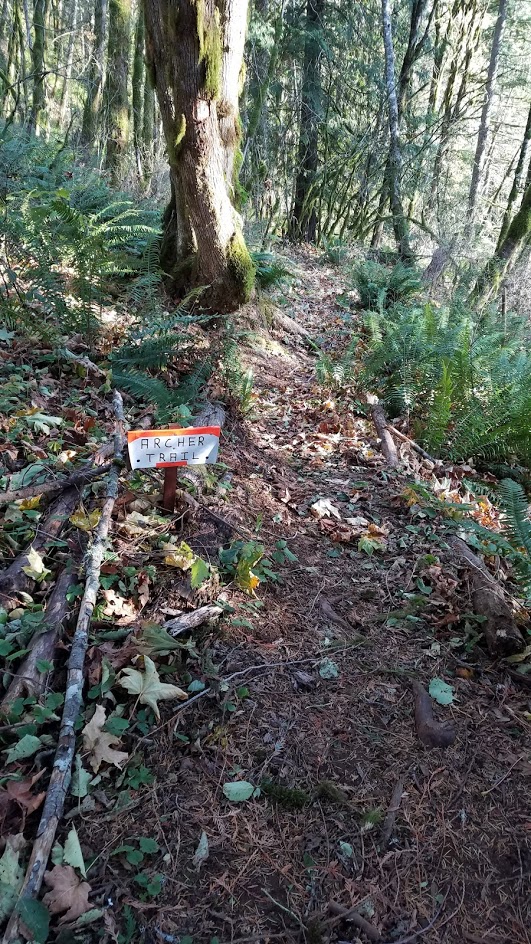 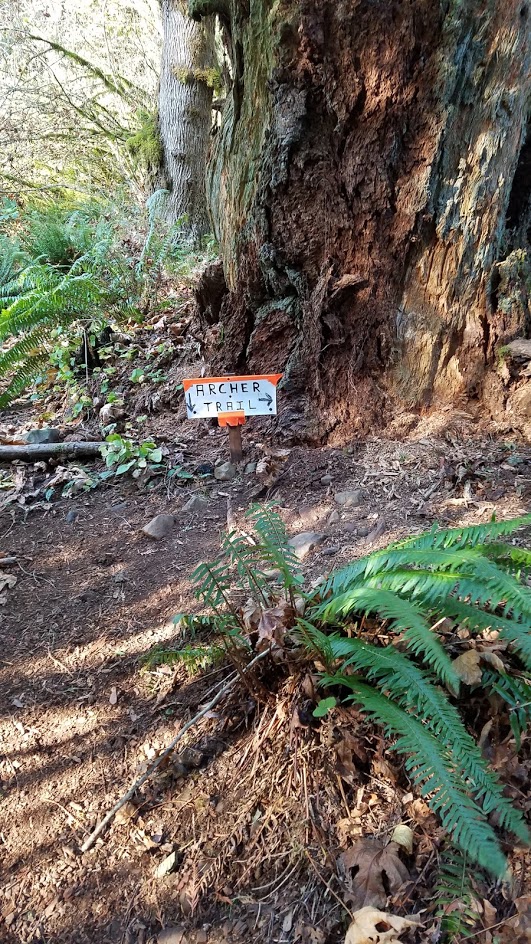 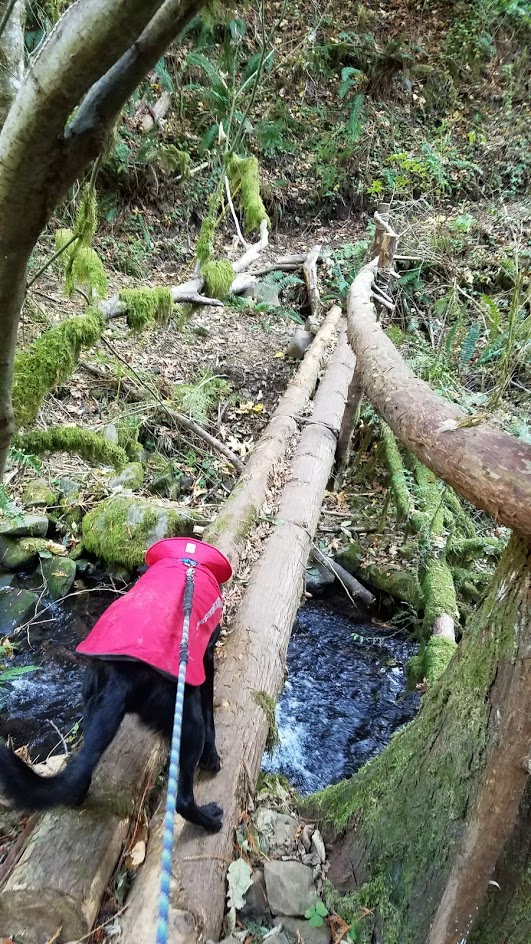 After I huffed up the switchbacks and found the viewpoint knob of archer falls (not flowing, but it did appear to have snow and a slight rainbow), things got harder to track.

The trail was a lot harder to see at this point but it was well flagged. I think it might not be the intended direction however, judging from my gps map vs the map on the page. The path went briefly uphill, leveled out, crossed an old roadbed, climbed again, leveled out, then hit the east side cliff area. I eventually made a turn near the cliff edge. I went down the hill (following flags) towards what I thought was the "arrow" viewpoint (It ended up being the "quiver" point, and I never found the path to the Arrow view), but that area is a complete mess. The vegetation is prickly and gross with little trail to follow. It was basically a bushwhack by the time I got to the views. When I headed back up the hill I noticed a much easier route off to the left heading downhill, which was exceptionally flagged. I never saw that route on the way up. I couldn't find it on my way back either. I tracked it for a bit but wasn't sure I could trust it so I went back the way I came. I'm guessing this path through the burn was the original trail.

I did run into some other hikers on the way back who appeared to be members of this forum (I am honestly terrible remembering names, but if they read this, I was the guy in the blue jacket with the happy black dog). They appeared to have come the original way and were surprised by the new trail.

This is definitely not for casual hikers at all. The switchbacks to the viewpoints were brutal and the trail gets sketchy there. It's also very unclear where the "no access" boundaries are.