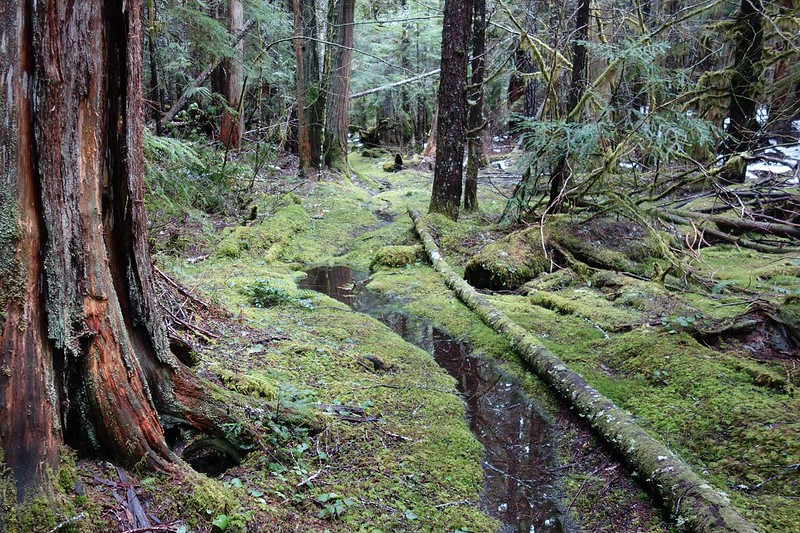 Well, it’s been a while since I posted a TR that was either local or current, but I had such a lovely time on the Salmon River Trail last week that I figured I’d share.

Like I suspect a lot of people here, with the Eagle Creek Closure still affecting most of my favorite spring hikes, I’ve been sort of scrambling around for alternatives. But I guess limits can lead to discoveries. Before the fire, I’d never really looked into the wildernesses that ring Mt. Hood’s south and east sides. They’re beautiful! At least the Salmon-Huckleberry is. I feel like I could—and will—spend months just exploring the old trails and apparently fading roads. Maybe there’s a lesson there about the world’s bigness.

Anyway, the short story is that the trail’s in mostly great shape, except for bits of brush and blowdown between Goat Creek and the Linney Trail junction and toward the far eastern end. Intermittent snow started near the Linney junction but didn’t pose a major problem until after the Dry Fir junction, around 3000’, where it quickly became a major headache. I didn’t actually make it all the way to the eastern trailhead: I had to stop a mile or two short, after postholing nearly up to my thigh. But what’s a few miles between friends? 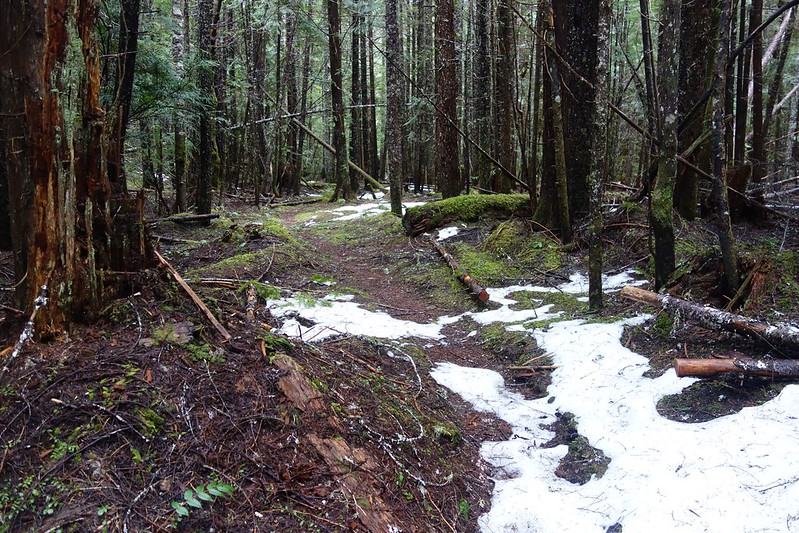 Just as it was picking up.

I got to the TH around 8:30, and hurried through the first couple flat miles, where I met the only two groups I’d see all day—both out for short, pre-work rain forest jaunts. 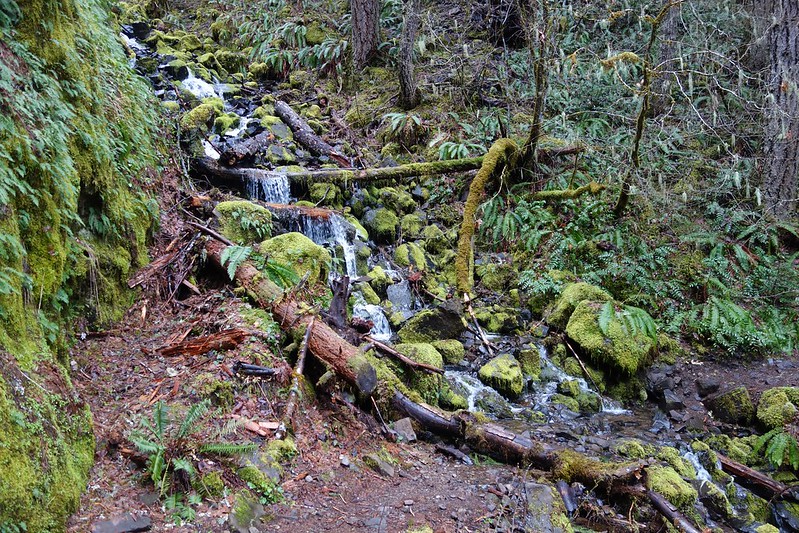 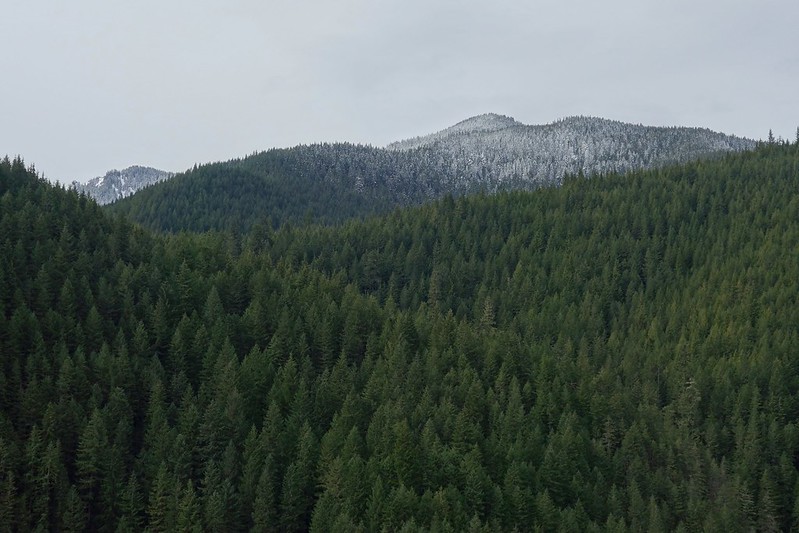 Snow on the ridges, from the viewpoint.

The Field Guide suggests the viewpoint as a turnaround point, and it’s certainly the last and best on-trail view you can get. But just after, there are several charming creeks which could be well worth an extra few miles. I could imagine some of them being a little tough to cross dryly in times of high flow, though I’ve just taken to walking straight through with my trail runners, which worked fine. 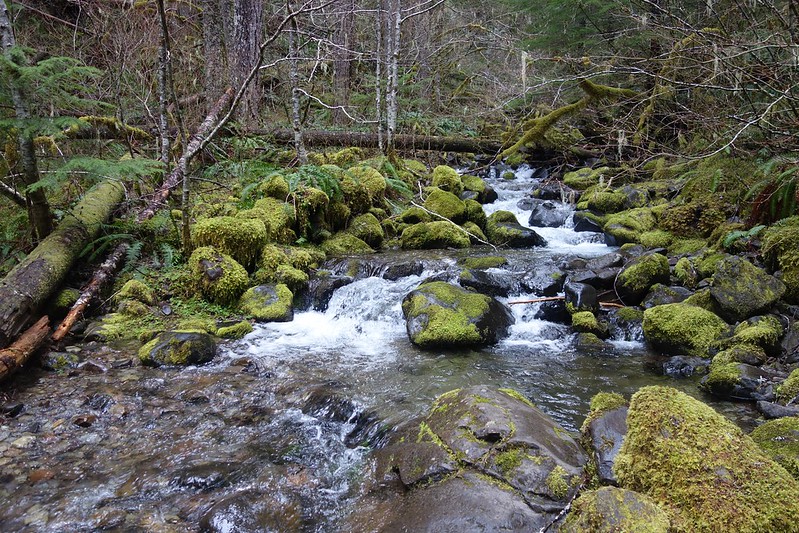 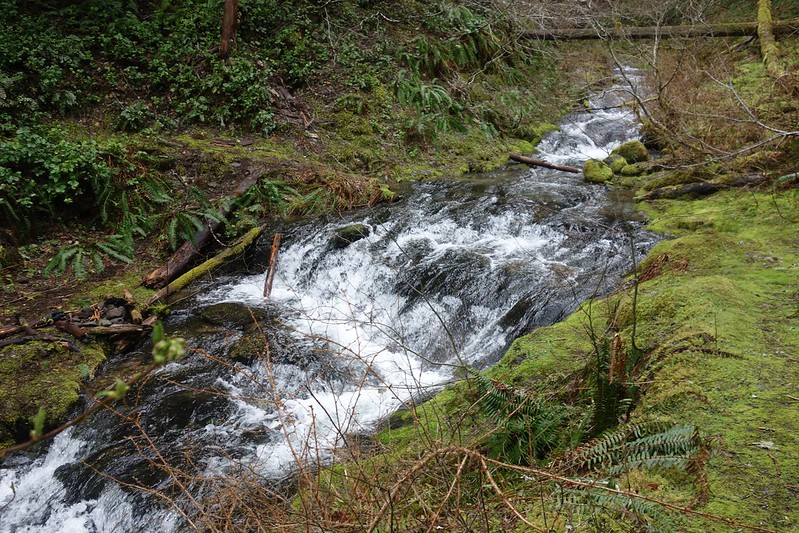 There are several campsites scattered on either side of Kinzel Creek, but after that there is very little camping until the Linney junction, several miles later. And the trail gets noticeably rougher: brushier, with more blow down. A few logs required some awkward ducking.

I tried to keep track of all the feeder creeks as I went, but, after Kinzel, almost immediately lost track of what I was looking at. I’m calling this one Very Little Ramona: 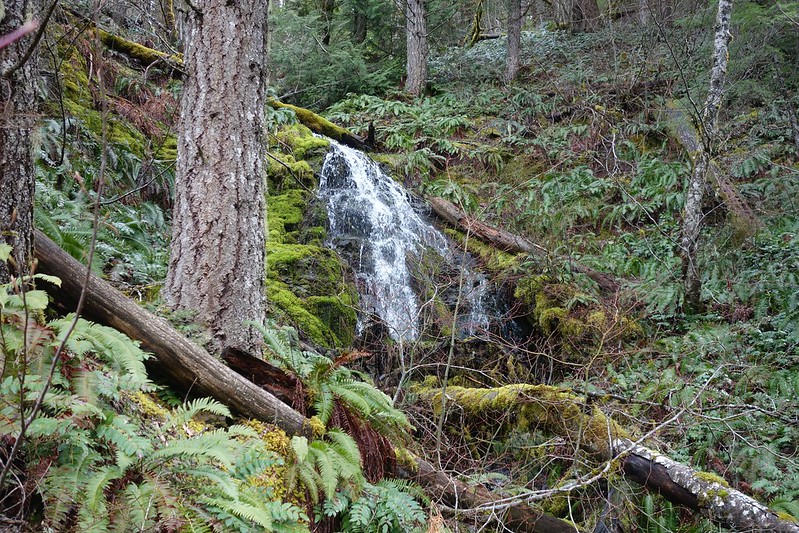 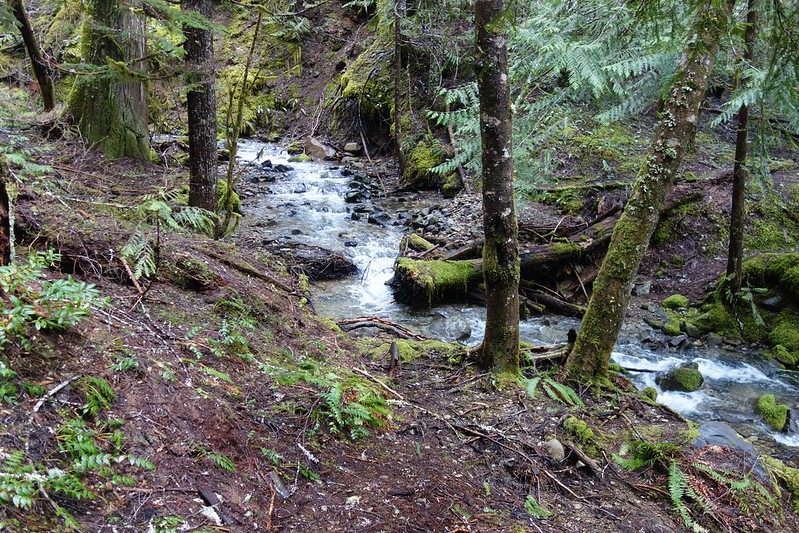 I turned off at the Linney junction just to see what was down there. There are several very luxuriant camps, then an unbridged crossing of the river that, at least when I was there, looked more like a swim. Maybe it’s doable in late summer?

After the junction, the trail turns away from the river, and enters a dark, damp bit of woods for a while. I could imagine this being heaven on a hot day. And, even though it leaves the river, the trail crosses so many creeks that I don’t think water would ever be an issue. 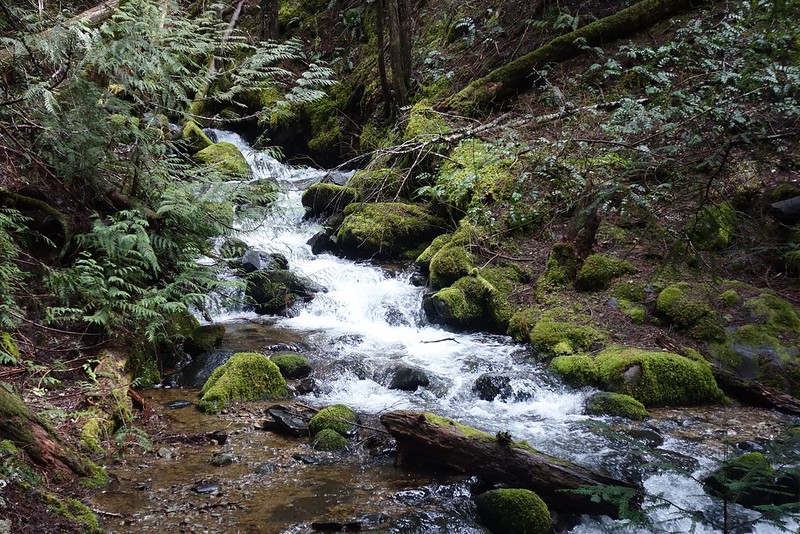 The Dry Fir junction is flagged but otherwise unmarked, and very easy to miss. If I’d been less stubborn, I probably would have turned around here, but kept going for a few miles, “Just to see what’s around that next corner.” 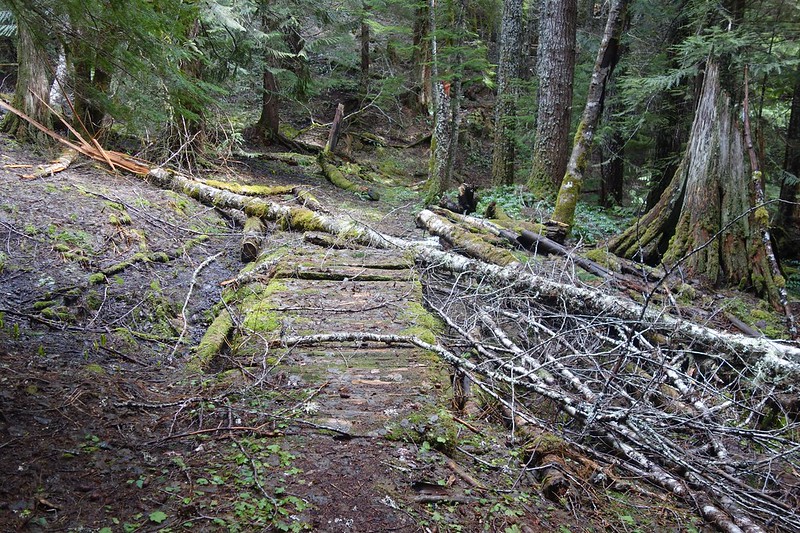 An old bridge being reclaimed. 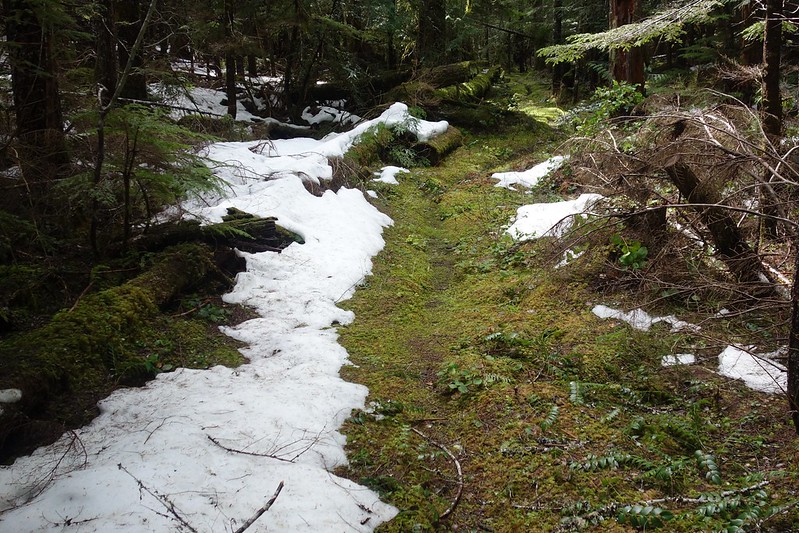 Once the snow became constant, things stopped being fun, so I turned around, and scurried back to a dry, creekside camp for lunch. 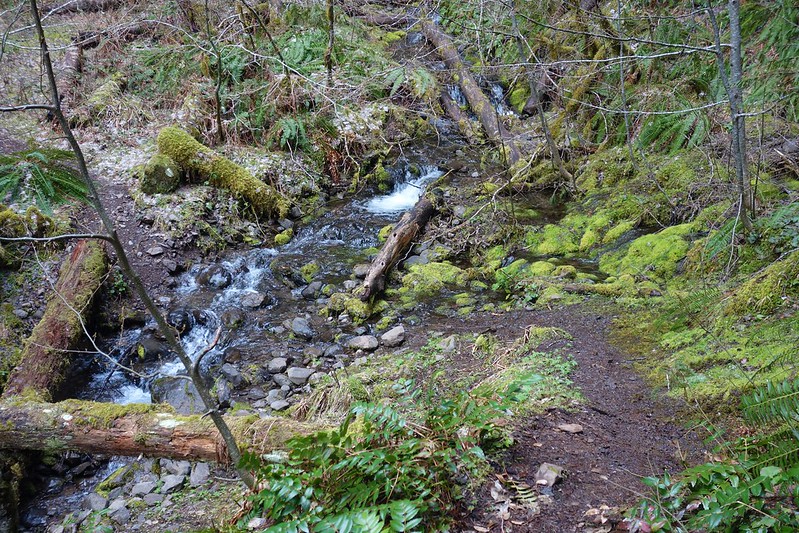 The sun became less and less shy as I ambled back to Kinzel Creek. By the time I hit the viewpoint, it felt positively spring-like. 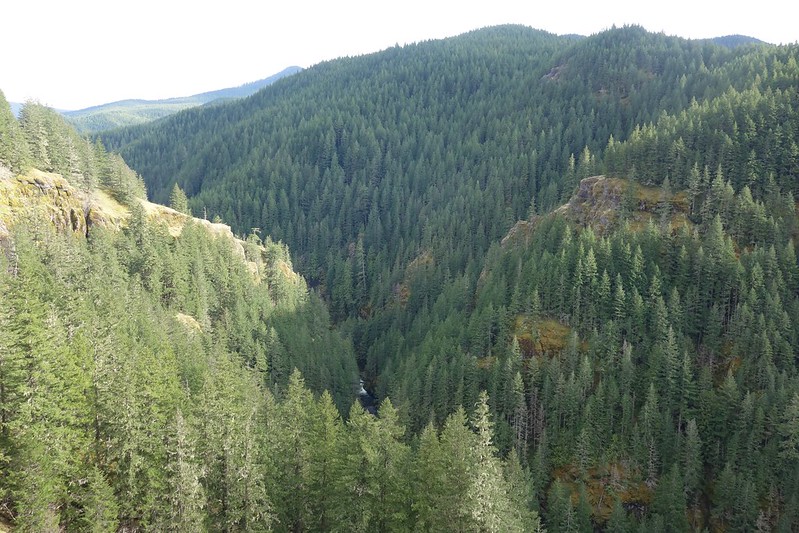 The last few miles were just a pleasant sunny stroll. A few backpackers had set up quiet camps in the old growth, but it still somehow felt secluded. What a wonderful place. I can’t wait to go back. 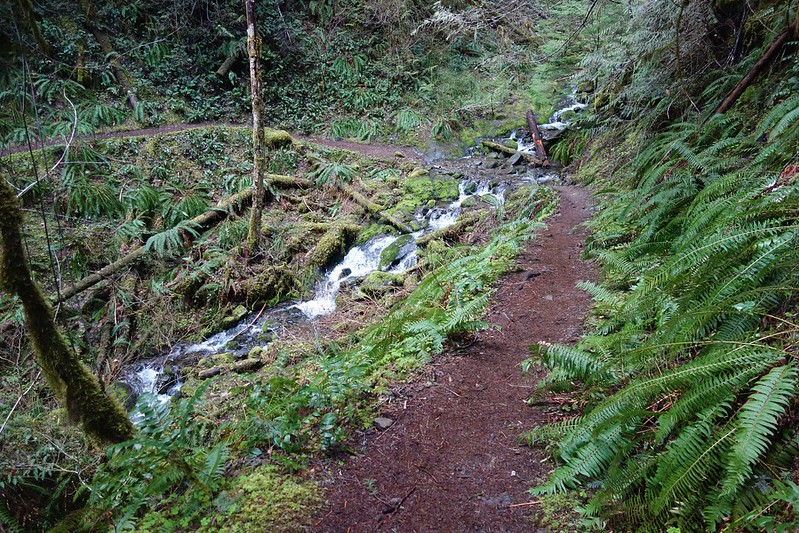 Awesome write up. Was curious about camping beyond Kinzel creek. Thank you!
Top

this is beautiful! do you think the early backpacking sites would be full on a saturday? seems like maybe since it's so close to pdx...
Top


blessthismess wrote: ↑
April 27th, 2018, 7:08 pm
this is beautiful! do you think the early backpacking sites would be full on a saturday? seems like maybe since it's so close to pdx...

Good question! There are a bunch of spots, but I could also imagine it getting packed, especially on a sunny Saturday. But, at least judging by trail quality, nearly everyone seems to stop at the viewpoint. If you can keep going to Kinzel Creek, I suspect you'd be good to go any time.
Robin