Last Saturday, with two young ‘uns leading the way, we walked on water (or rather river cobbles) between Hamilton and Ives Islands. The latter is part of the Gifford Pinchot and hosted a number of fishwheels in the day – These are well-explained in Scott Cook’s Curious Gorge. My other guide for the trip was Guy and Chiyoko’s trip in 2015.

It was, in fact, a dry crossing. We first headed towards the middle of the island and found a stranded fishing platform. The cable had snagged a cottonwood during the high water season and is now part of the tree. Then we headed out, on a tread of large cobbles, for a round of fishwheel remains: these contraptions, which are still used in smaller form by natives in Alaska, for example, scooped tons of migrating salmon out of the river. Lines of pilings show how the fish were channeled towards the wheel. Most of the wheels belonged to canneries and, around the beginning of the 20th century, the haul was so bountiful that canned salmon became the cheap meal of choice for the laboring class. The wheels, and a subsequent plague of unregulated industrial-strength gill netting, pretty much did in the big salmon runs long before the dams were built. Fishwheels were outlawed in Oregon in 1926 and gill netting now abides by strict rules.

Views from the island are magnificent. We were across from Moffett Creek, and could see up to Munra Point. The Washington Gorge peaks stood out in relief: Archer Mountain, Hardy Ridge, Hamilton Mountain, Birkenfeld and South Birkenfeld, Cedar Mountain, Aldrich Butte, Table Mountain, and Greenleaf Peak. Beacon Rock and Little Beacon Rock hulk over the river shore.

We circled around to the west tip of Ives. You’re allowed to camp here, but a plywood shack with a wood stove seems somewhat permanent. There’s even a No Trespassing sign – on public land! We entertained the notion of crossing to Pierce Island, formerly Nature Conservancy and now passed to the Columbia Land Trust. They do not permit camping, but you can visit and walk the shore. On the river side, the water was pouring into the channel and rapidly became three feet deep: with the strong current, it was a little too risky with kids. Further along the west shore of Ives, I went into calm water, had to put my pack up on my head, and got up to my armpits. I turned around at one of the gravel bars. While Reuben and I waited on Ives, Andrew and Ezra swam across to Pierce (The deep point was about six feet, they said) and conversed with a couple of kayakers who had pulled up on shore.

Together, we walked up the north shore of Ives. On the Washington shore, some pilings were the remains of the Castle Rock Fishwheel. A couple of beavers, looking more like hunched up bears, were sunbathing on a snagged log. The shore is littered with the shells of invasive Asian clams. We turned inland and poked around the Ives Pond. Here we found a native floater about six inches long! Elk tracks and droppings were all over the interior of the island.

When we returned to Hamilton Island, the river had come up about two inches. This is supposed to be the farthest extent of tidal influence up the Columbia, but I don’t know if it was the tide or simply more melt coming down in the middle of the day.

Interesting perspective from there, almost like someone took familiar Gorge landmarks and put them somewhere else entirely. I'll need to check it out while river is low. Thanks for the report! 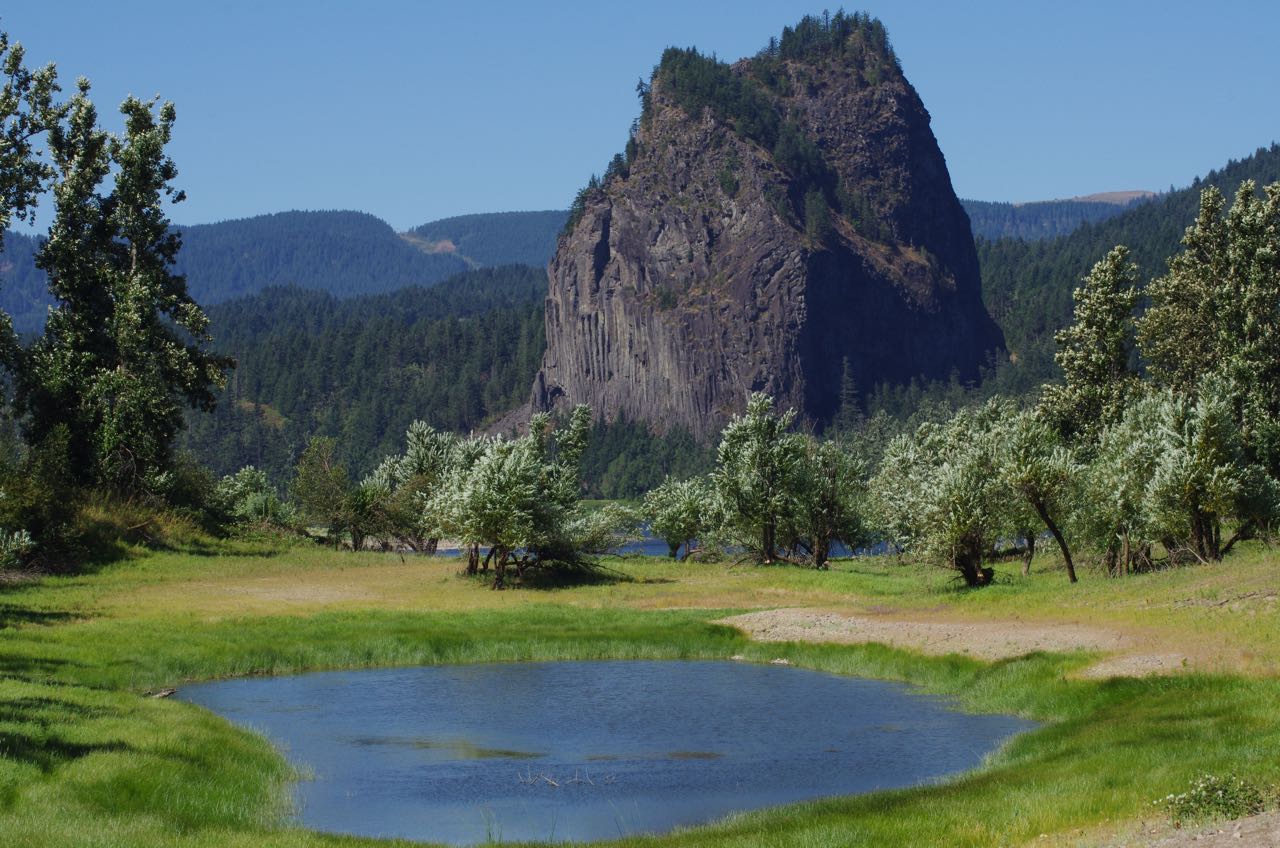 Yeah it seems the water crossing between Ives & Pierce varies between a few inches and several feet. I'm assuming this is tidal rather than dam release but don't really know. We hit it just right on our trip with only ankle deep water but we heard just a couple of days later it was several feet. If it is tidal a tide table would be really useful for this trip!
hiking log & photos.
Ad monte summa aut mors
Top

This tide table shows a six-foot swing in the tide for at least one tide a day at this time of year!

I believe the gauge is actually at Ellsworth (I-205), which is the farthest station upriver that reports. Anyway, I saw lots of discussion on fishing sites about this. They have pay attention to this stuff. Obviously, hikers tripping to river islands need to as well!
Top

This is an awesome trip. We followed in Guy and Chiyoko's steps a couple of days after they did it and it was definitely much deeper water. Guy even laid our gps track over his and we were in identical spots. Thanks for the link to the tide tables. We will try to hit this one again before the rains start

'We travel not to escape life but for life to not escape us.'
-Unknown
Top

sprengers4jc wrote:This is an awesome trip. We followed in Guy and Chiyoko's steps a couple of days after they did it and it was definitely much deeper water. Guy even laid our gps track over his and we were in identical spots. Thanks for the link to the tide tables. We will try to hit this one again before the rains start

I find it amazing that there is a 6' tide swing so far from the ocean!

This tide table information will also be useful for those wanting to walk out and around Sand Island too.