I was looking for an out of the way place with the possibility of lighter traffic than what was being predicted. I settled on the Clackamas District, specifically East Mountain which is the bump at the south end of the Fish Creek Divide. There is a clearcut on East Mtn that reaches the summit so not much to obstruct the views east and south to Jefferson - regrettably I couldn't see Hood. There is a decommissioned road to travel and a mild bushwhack to get to the top - had the place all to myself.

Jeff in the morning with some smoke. The smoke increased during the day due to what looked like a new fire. I'm not sure of the location but it got big in a hurry. The near peak is Schreiner and I'd considered it as a viewing platform - probably would have worked well but I don't camp so getting to the top in time would have been a problem. 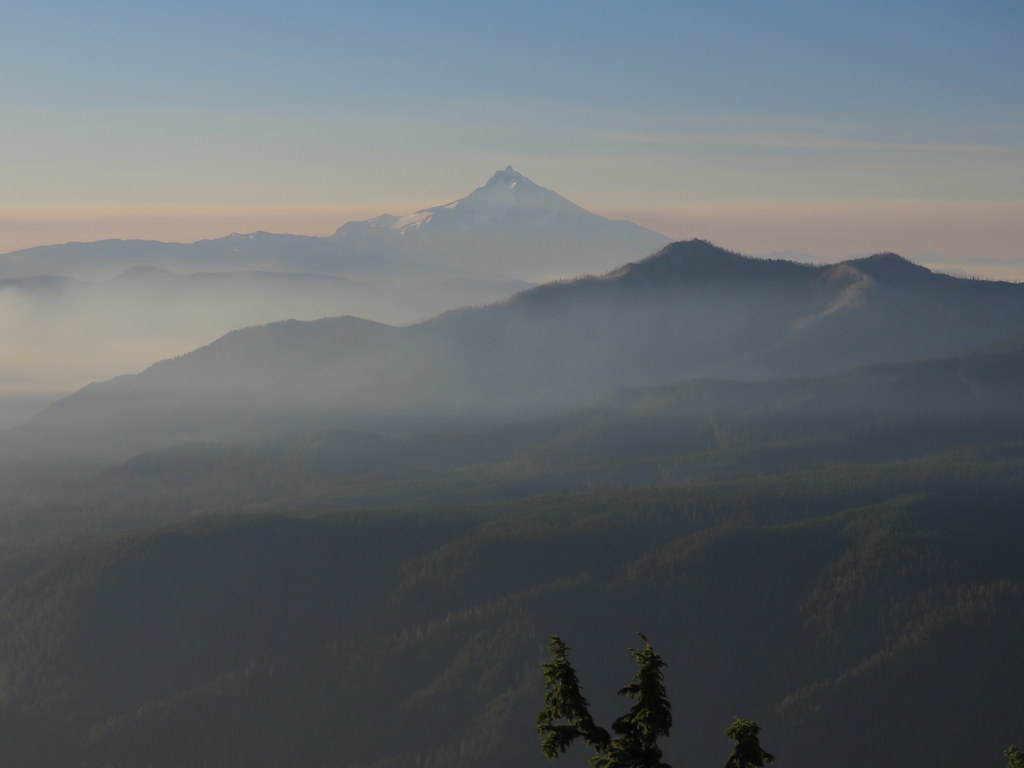 From East Mtn, Thunder Mtn is a short hike away. 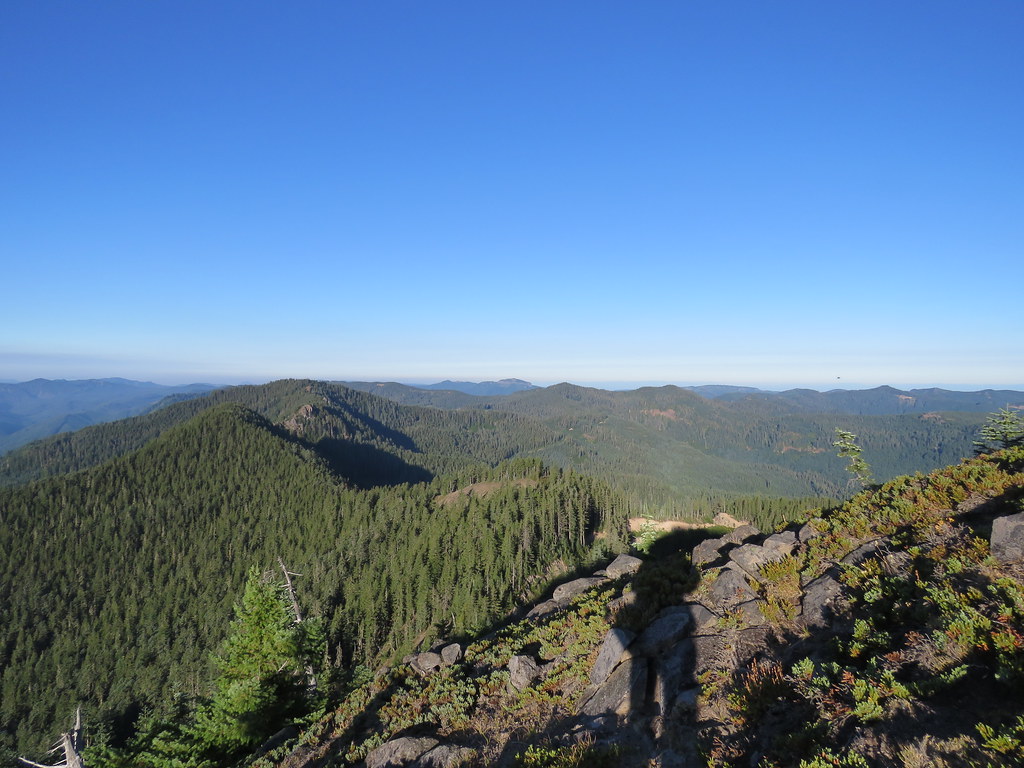 Olallie and Jeff with increasing smoke, the lights are going dim at this point. 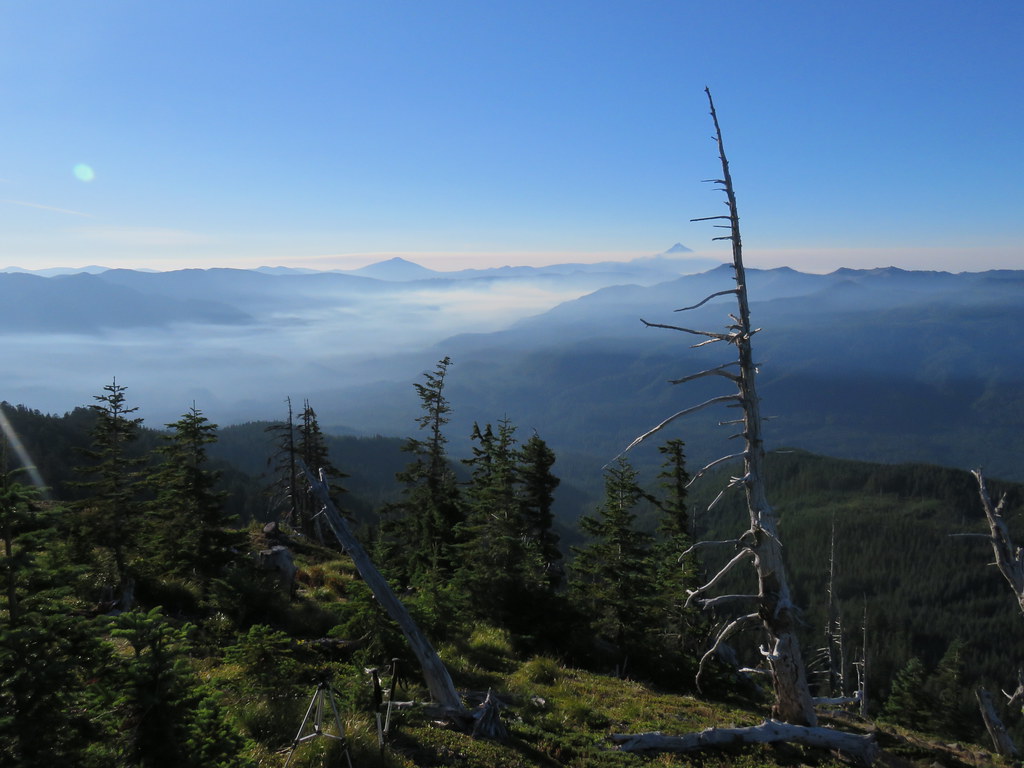 I was not mentally prepared for the all around sunset/sunrise look on the horizon. 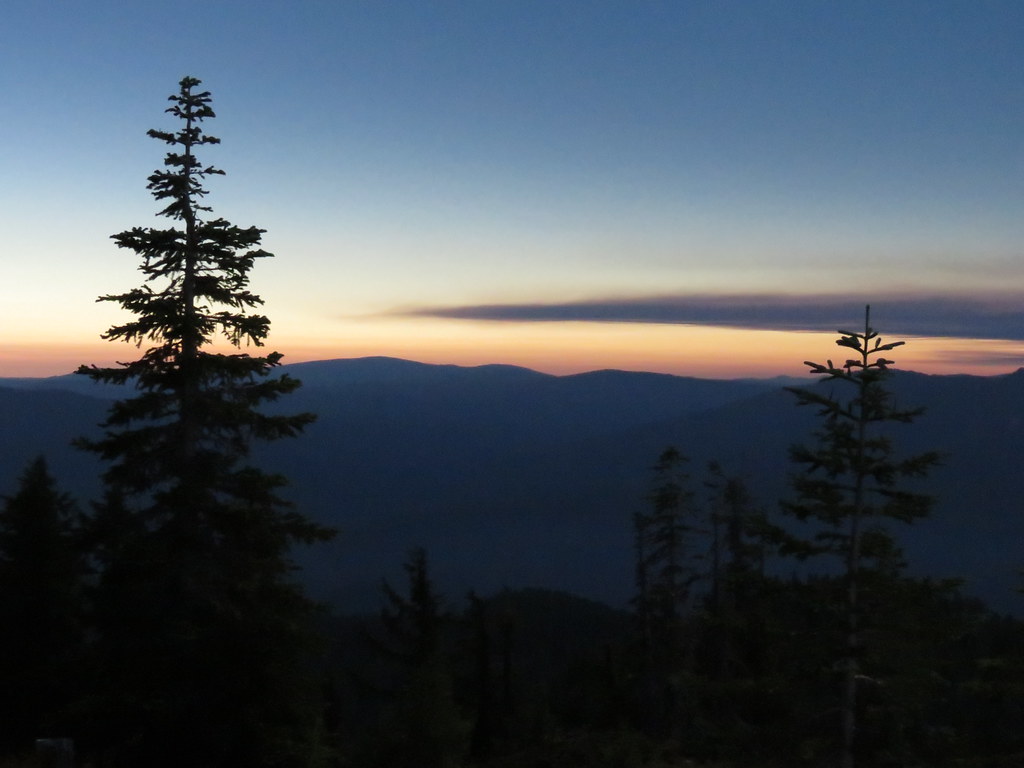 I was using my camera as a telescope to view the corona and somehow captured this. 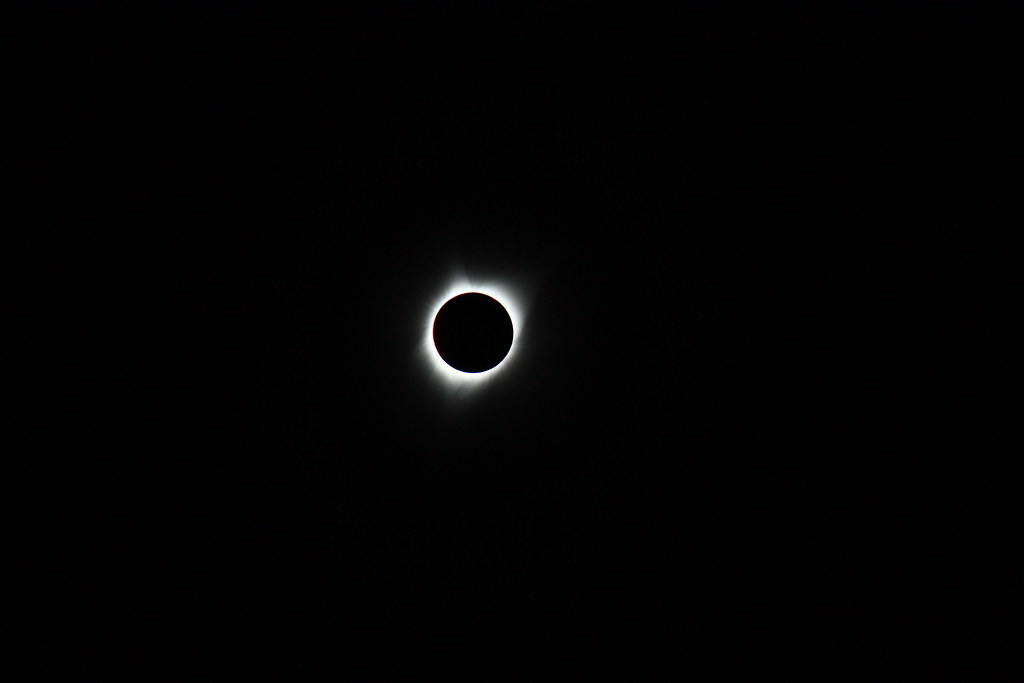 Here is the start of the fire down south. By the time I left Jeff was totally obscured by smoke. 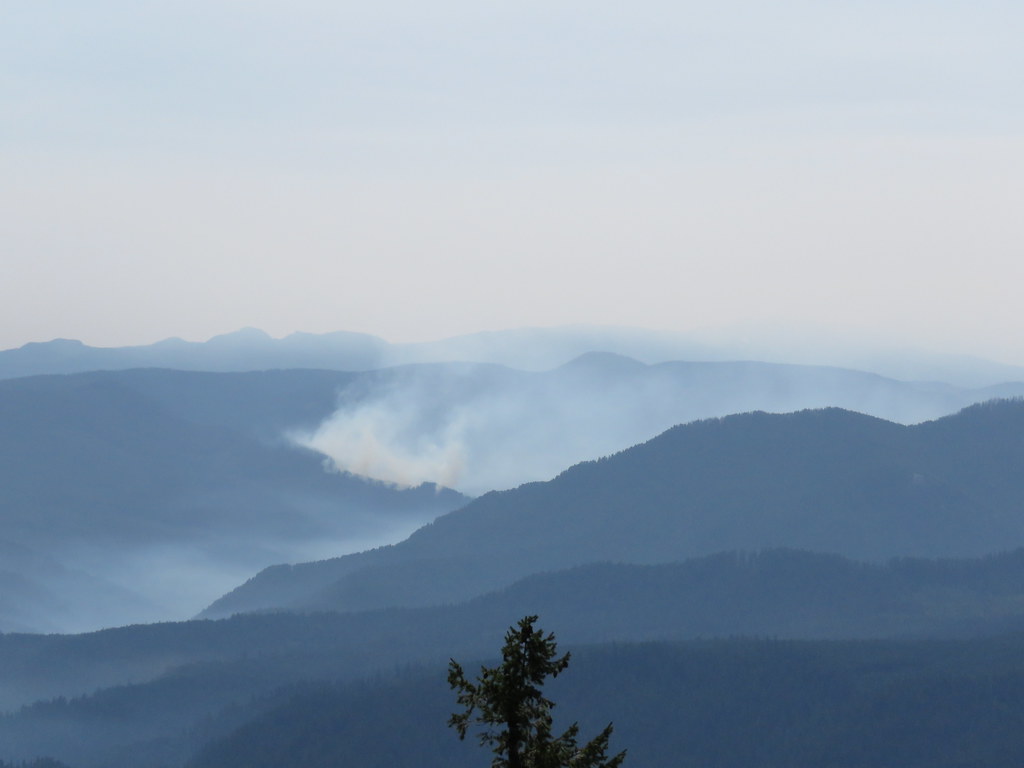 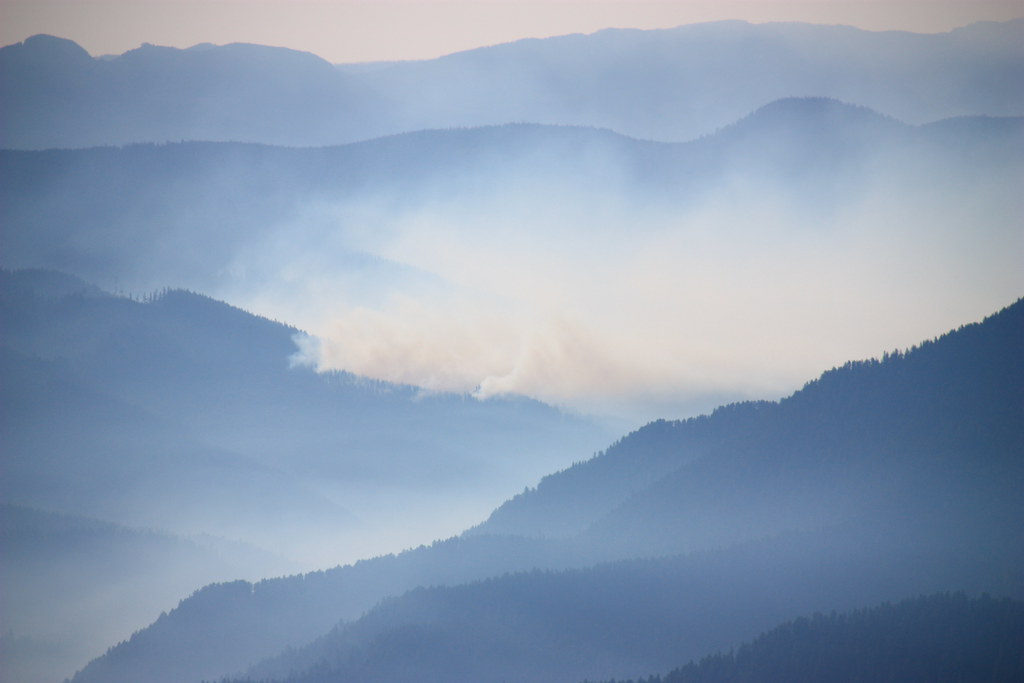 Traffic on the way back was heavier than usual but not slow. The only delay was at Estacada where the fire department had stepped in to allow folks coming up from Mollala to get onto 224.

The last eclipse of my life, priceless.

Wow, Paul. That shot of the total eclipse is marvelous!


pablo wrote:There is a decommissioned road to travel and a mild bushwhack to get to the top - had the place all to myself.

Clackamas district was a good idea. No surprise anything along Fish Creek Divide (except possibly Fish Creek Mtn) was devoid of humans. I'll have to remember that for the next total solar eclipse in 2154!
Top

Nice! And great photos! I've heard about the sunset look that many people saw. We were in the thick of the smoke on Stahlman Point and didn't see that.
Top

Thx Ben. Hey, we should do something in 2154, that's a little ways off so I'll just pencil it in for now.

Thx Cheryl and you say:


We were in the thick of the smoke on Stahlman Point

I assume the source of all that smoke was from the Whitewater fire as the valleys there seem to all point to Detroit, and it has to be the fire I was seeing from East Mtn.

Looks like you had some of the best weather for viewing the eclipse, North of the fires. Amazing color and glow during totality. It must have been amazing to experience it with no one else around.
Top

Nice photos! Glad you found a good spot. But Paul, I hope this isn't your last eclipse! There's a good one in 2024 and I intend to be there for it.

I assume the source of all that smoke was from the Whitewater fire as the valleys there seem to all point to Detroit, and it has to be the fire I was seeing from East Mtn.

So it looks like East Mountain is about 14 miles Northwest, as the crow flies, from where we watched the eclipse. We got to our spot the day before and observed both the Whitewater and the Detroit fires. The smoke wasn't really impacting us, since they were to the south and the wind was out of the Northwest. Then later in the afternoon heavy smoke moved in from the north. We talked to the county Sheriff, who happened to be out walking the trail, and checking the surrounding forest roads. He mentioned there was a new fire to the north of us, "up the '50" (road reference). Back at the trail head we saw a local fire crew turning up the road to find the fire. We drove up the road a couple miles and indeed saw thick blue gray smoke in the valley below the road and not that far to the north. Later parked back at the trail head a helicopter flew over head with a water drop, and shortly thereafter the smoke died down considerably, though it could have been a change in temps or wind. We opted to sleep in the back of the subi instead of backpacking just in case the fire moved or a new one arose nearby. No sooner had I fallen asleep then another officer rapped his flashlight on the car window and said the new fire had grown to 8 acres and we were likely fine but if the wind shifted we could be in a real bad spot. Discomforting to say the least. He said we didn't need to leave but that he wanted to warn us just in case and was putting up tape to close the road. After lying there awake for 15 minutes I hopped in the driver seat and moved us 2 miles in the other direction around a ridge and slept with the windows down to smell for smoke.

Next morning back at our spot the wind was out of the south and at that point it was a race against the clock between the rising and northward moving Whitewater fire smoke and the total eclipse at 10:19. Fortunately the eclipse won! and we had very clear skies overhead to the south and east, and were able to see a few stars at totality. I couldn't tell if the fire to the north had died down or if the wind was just blowing it north vs down on us, but from your pictures it looks like the smoke was just blowing north.

The sheriff mentioned that the new fire north of the Whitewater on Little Devil's Ridge was target shooters. We heard a good amount of target shooting all day and I can only assume that's what caused the fire to the north. Amazingly there was still shooting going on in that valley despite the new fire. At the risk of being too controversial I have ZERO use or tolerance for target shooting. Fires, noise pollution, trash...if someone can make an argument touting the merits of allowing target shooting I might listen...but probably not.

you wouldn't have been by any chance in the vicinity of a 'raptor mountain' would you? because... we camped at the top of such, met a sheriff deputy who came up to evaluate, saw a heli with bucket go towards the new little fire, and saw said road in that direction taped off the next morning.

sounded like a narration of part of our eclipse day!
Feel Free to Feel Free
Top

you wouldn't have been by any chance in the vicinity of a 'raptor mountain' would you? because... we camped at the top of such, met a sheriff deputy who came up to evaluate, saw a heli with bucket go towards the new little fire, and saw said road in that direction taped off the next morning.

We were indeed! I ran up to the lookout the day before to see if we wanted to watch from up there, but opted for the more wide open meadow closer to the trail head...given that the wife is getting deep into the third trimester it was definitely the right move for us. I bet it was nice up on the summit too!

I've been up there a couple times, including a wonderful night on the summit. Never imagined I'd see that many people at that location. The couple staying in the lookout said they were directed there by a forest ranger. I guess everyone else just pulled out the topos or google earth for the big event?
Top

A video of totality from my helmet cam.