Background: in 2006 and again a few years later, storms and floods — and maybe even a jökulhlaup — damaged and eventually obliterated the Timberline Trail across the Eliot Branch (a.k.a. Eliot Creek). People started using an unofficial crossing a bit upstream from the previous trail, but it included ropes, was on the sketchy side, and made a lot of people nervous. I scouted out some possible creek-free "high routes" on Eliot Glacier itself, and also wrote up detailed instructions on negotiating the ropes and the washout.

Late last year, they finally built the long-awaited new Timberline Trail crossing, downstream from the previous crossing(s). They promise this one won't be as prone to future destruction because it's closer to bedrock. So, I went up last week to check things out. 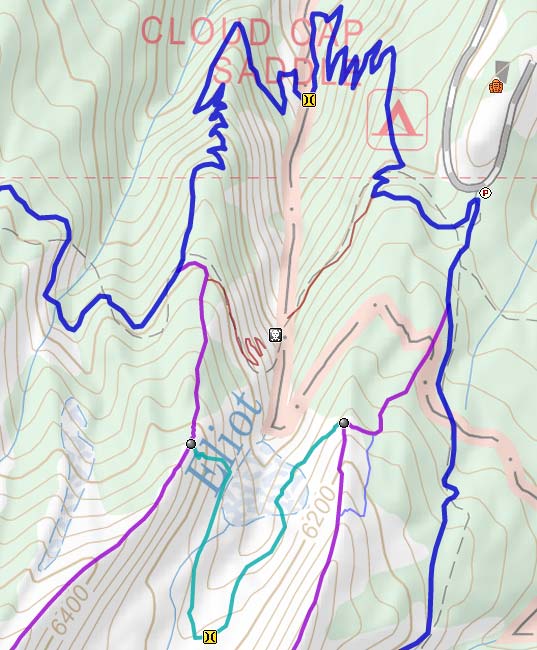 (The fat blue line is the Timberline Trail. The purple lines are the boot paths up the west and east moraines. Turquoise is the washout crossing, a.k.a. the "ropes route.")

It's looooooong. It takes almost a mile to switchback down from Cloud Cap to Eliot Creek, and it drops about 500 feet. On the west side, it gains about 600 feet over the course of 7/10 of a mile: steeper, but with fewer switchbacks. The Cloud Cap side is largely unshaded thanks to the 2008 Gnarl Ridge fire.

Here's a photo of the east side, taken from the west: 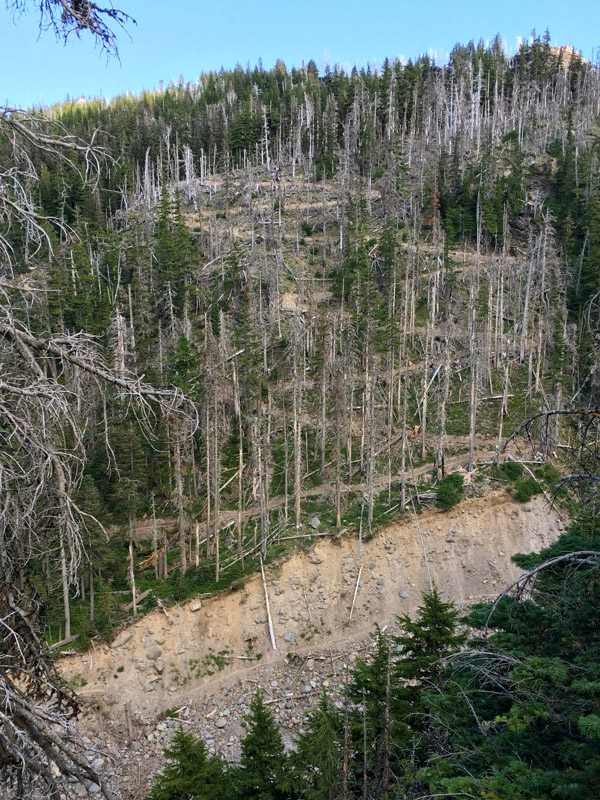 As for the stream itself... if you were hoping for an easier crossing, I have good news and bad news. The good news is that on the day I went, there were logs that actually made it pretty darn easy: 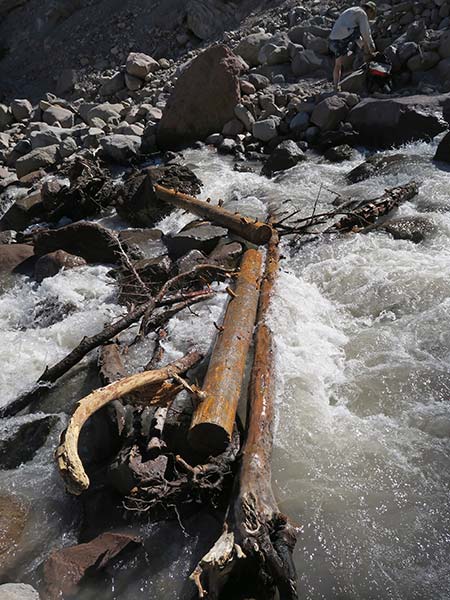 The bad news is that log crossings don't last forever, and on a high water day it'll be pretty bad. Basically, the stream crossing itself is no easier than it's ever been. It's on a par with Newton, Coe, and Muddy Fork. 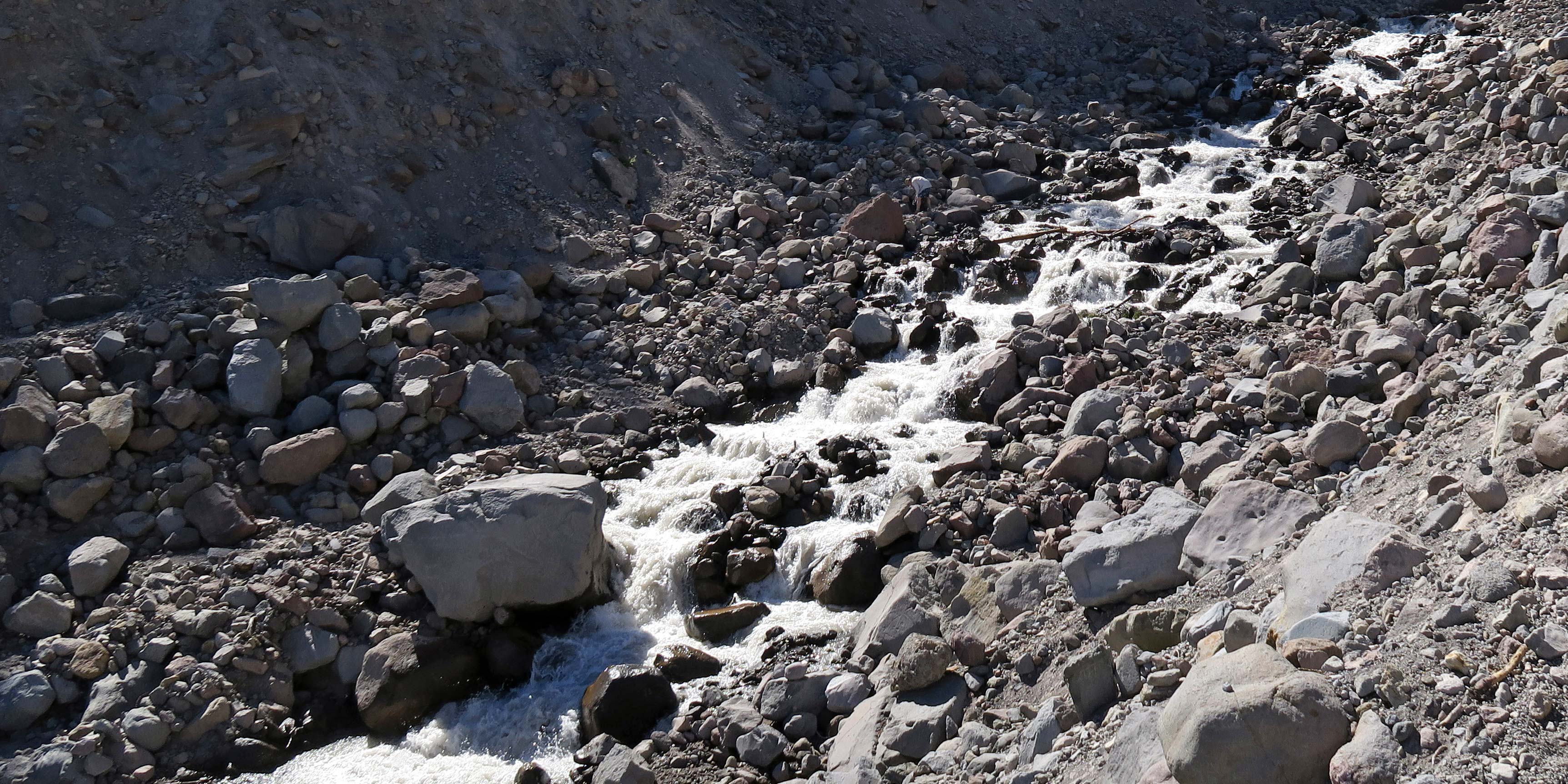 First of all, let's stop calling it the "ropes route," because the ropes are gone. (I don't know if the Forest Service took them out or if nature did.) On the west side, as expected, they've decommissioned the trail that leads to the west moraine of Eliot Glacier. Here's the junction, with the old trail leading uphill, obscured by sticks and brush: 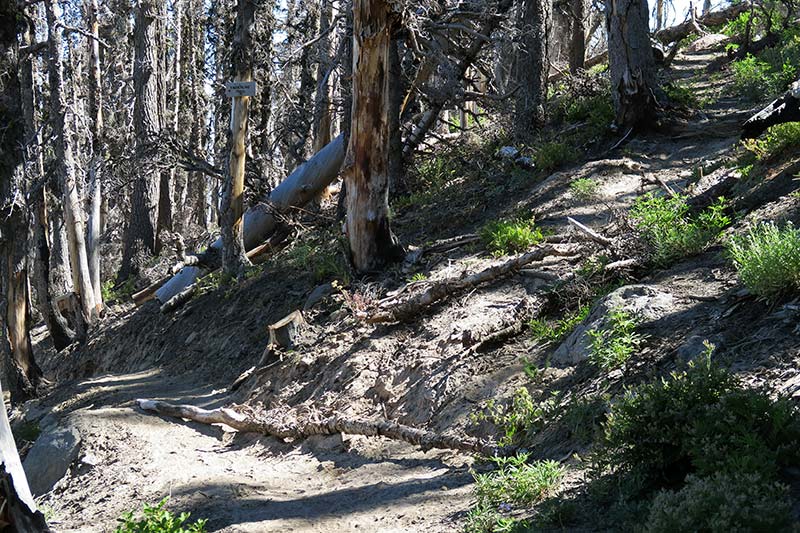 On the east side, though, something interesting has happened: they've kept the old trail in place, and put up a new sign indicating that it leads to the "Eliot east moraine": 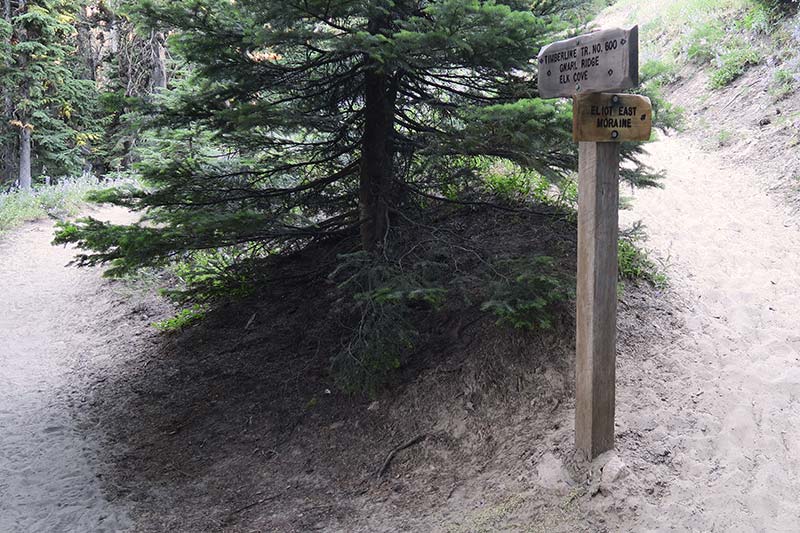 That's cool, because it implies that they're encouraging the east moraine as an alternate route up to Cooper Spur, which opens up an obvious loop option for those who didn't already know about it — or who don't like taking unsigned trails.

Now, about the crossing itself... the steep west side is pretty much like it's always been. It's doable, but much slower going on the descent without the rope. The stream itself also hasn't changed much; in fact, I found my usual crossing rocks more or less where they've always been! (Of course, this being a hot day in a high snow year, they were mostly underwater, and I ended up crossing way up near the end of the ice.)

The east side has suffered some rockslide damage, but isn't hugely different than it was before; the lack of a rope doesn't change much. The trail from the "bench" up to the top of the east moraine is still there — it's visible as a light streak in the left-center of this photo: 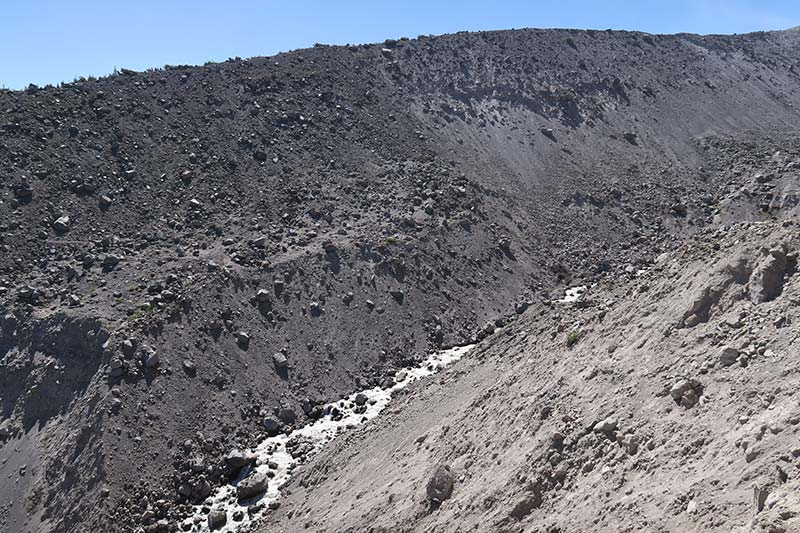 I didn't go up on the glacier last week, but visually it didn't look like anything had changed significantly up there. My old advice still applies. 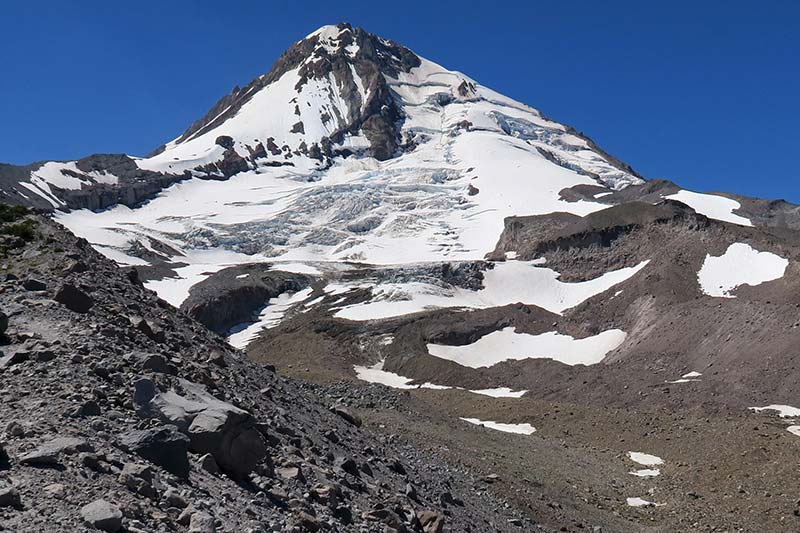 Both the new "official" route and the old washout route are viable options. The new route avoids nasty loose moraine debris, but it's longer and involves more elevation change. As always, the glacier is an option for those who want a little adventure or really hate rock-hopping across raging streams.

I've updated OpenStreetMap with the new trail alignment, so sites like GraphHopper will be able to calculate mileage and such. 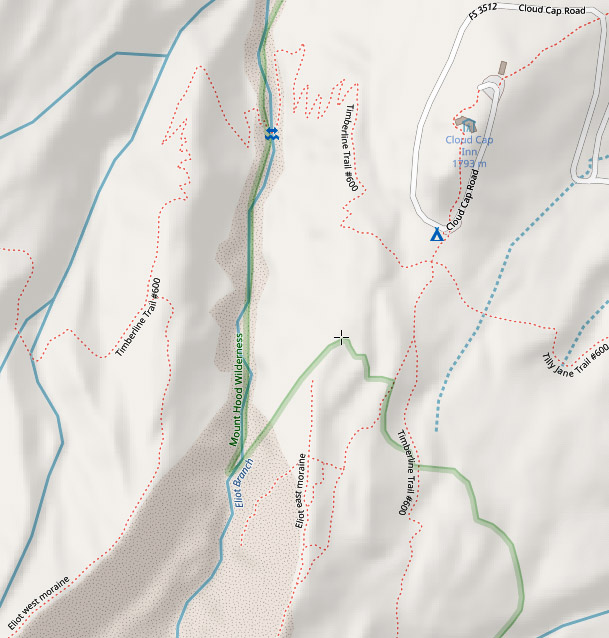 Thanks for posting such a thorough summary! Having just done this crossing on the 5th, and wondering how what we did compared to what was there before, your map was neat to see. I was hoping that the newly rebuilt trail would mean this crossing was "easier," but I thought this crossing was difficult, probably the 2nd most difficult of the full trail (with Coe as my most difficult). If those logs hadn't been there, I'm sure it would have been treacherous at best, and those logs won't last past a good rain, and I'm thinking by the heat of the day even without rain they are under water. (We were there around noon.)

Anyway, I concur - the new trail is a long addition, and the fact that it is almost all sand on the western side made our descent a real knee-killer!
Top

I don't understand that new trail. Tried it once. Way too long/low. Next time I need to get across Eliot, I'll find my own way.
Top

They're just idiotproofing it for me as I had never messed around on Hood before a month ago.

It definitely felt excessively long, but at the same time, when you're doing a 40ish mile loop, adding a half mile or something in the middle of it, shouldn't really effect anyone's decision whether they or not they want to do the hike.
Top

Nice update Adam, I haven't got around to trying out this new trail yet either.

I clicked on the graphhopper link, it says I should be able to cover that trail in just 33 minutes. Must be fit folks who work there

What I liked about the old rope crossing was that you would cross where the Elliot was in two channels and spread out so fast water was almost never a concern.
hiking log & photos.
Ad monte summa aut mors
Top

Back in early july no logs , would a been nice but things do change, the one constant. Then , then other crossings seemed more intense was considering a counterclockwise version soon when it cools a day or 2.

And thanks for update and maps! The one I had back then stopped at just after elk cove I guess , witch is just prior to where the more care was needed, for the most part, haha. And yes, GPS kept it on the path, liked, before cloud cap and after it past gnarl to the right turn to stay on 600, and overgrown, wow , then that shale avalanched, part just after that, and a wild crossing. Then the flat camp spot by the stream just 2 or 3 valleys later.
What a hike!
Top

Am attempting an upload of a downsize photo of where I crossed that one in early july...
It acted like it accepted the smaller file so. Will see..

I crossed Eliot Sunday evening at sunset going clock-wise. I dropped in at the old rope location and cut across diagonally slightly to the bench. This was pretty easy, quick, and didn't feel sketchy to me (YMMV). Then I went easily up to the split and crossed 3 branches with the last one being the largest. Then I contoured upwards to the bench on the other side (thought that might be easier than getting up without the rope on that side...don't know if that was better or not.) The plus was that I just contoured up to the bench and avoided that first ascent up the steep scree. The minus was that my contour was on loose small rock that was not stable as I walked. The other minus was that going through that was pretty exposed to rock fall if something decided to break-free from above as you're strolling through. (I kept glancing up every stride to watch for that...nothing broke free.) Once I reached the social trail on the bench then it was the usual piece of cake to the top of the moraine.

Thank you Adam for all your work on the Elliot crossing.

The glacier route seems even more direct so thanks for the link to your sage advice regarding this option.
I keep making protein shakes but they always turn out like margaritas.
Top

They need a bridge. I think they had planned to do that at one time or another.

Why not just a couple of those cable lift pylons from the ski areas and a long cable stretching across the Elliott !!!
Or just use the trees for a cheaper way to go.

And you'd build up those arms having to retrieve the cable car from the other side.

Or we could go with a cable suspension bridge. Maybe it would be too expensive though????