Took a wonderful, windy, wintry walk yesterday, from Herman Creek up Nick Eaton Ridge to Greenpoint Mountain, to the PCT via Rainy-Wahtum and the Anthill, then back over The Platter. Snow started just under 4000', and was up to 8" or a foot on top of Greenpoint (4737'). Bizarrely, the deepest snow I met all day was on Rainy-Wahtum, on that open curve just before it juts west, where there were drifts of 2' or more. 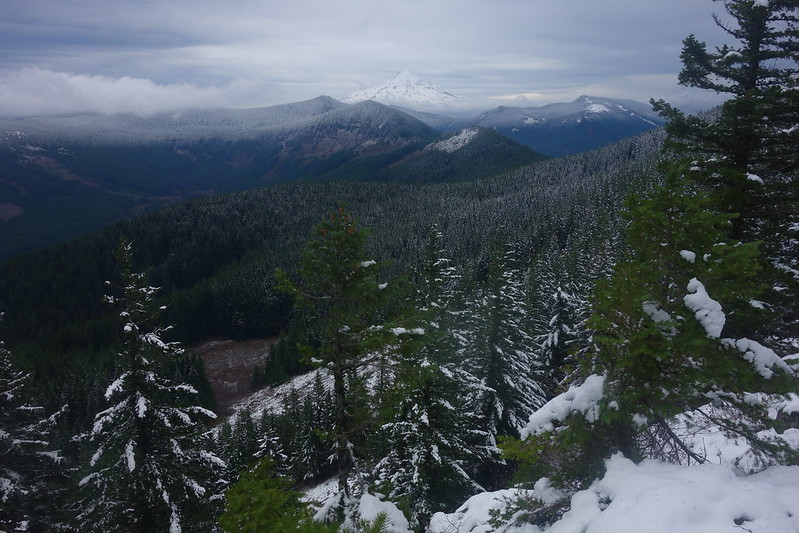 Opening picture: Hood and Friends, from the Benson Plateau

I got to the Herman Creek TH around six, and headlamped up to Nick Eaton. I'm always forgetting how steep that trail is. I guess its virtue - maybe its only virtue - is that it gets you up quickly. But still.

The sun rose as I was passing the first major viewpoint, and I stopped for a while to put away my headlamp and eat my first breakfast. 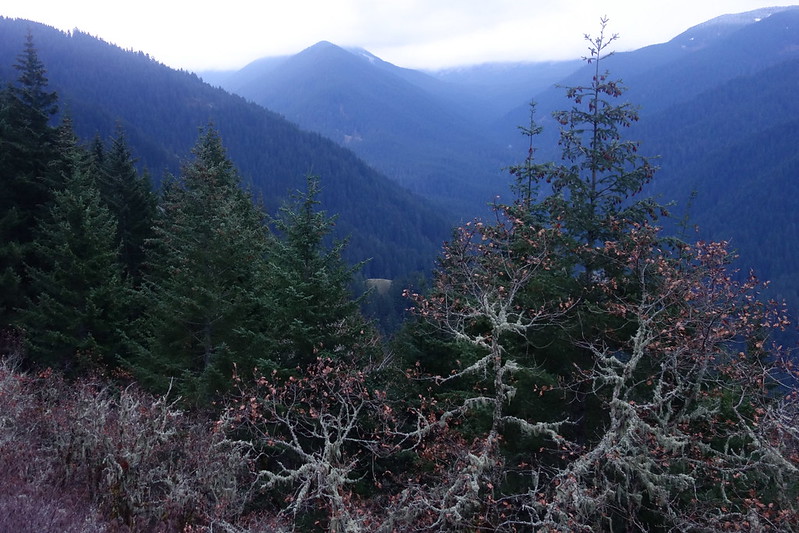 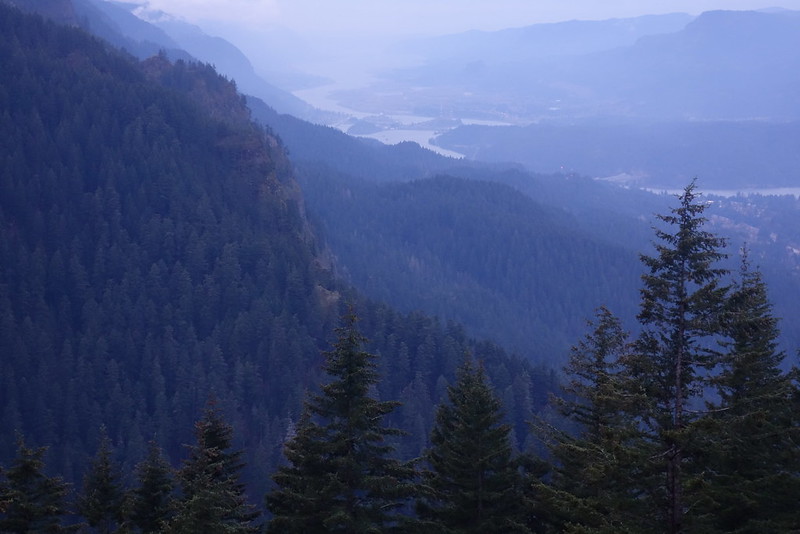 From there, it was easy, mellow walking for a while. The first little bits of snow started around 3500', and got continuously more committed over the next 500'. 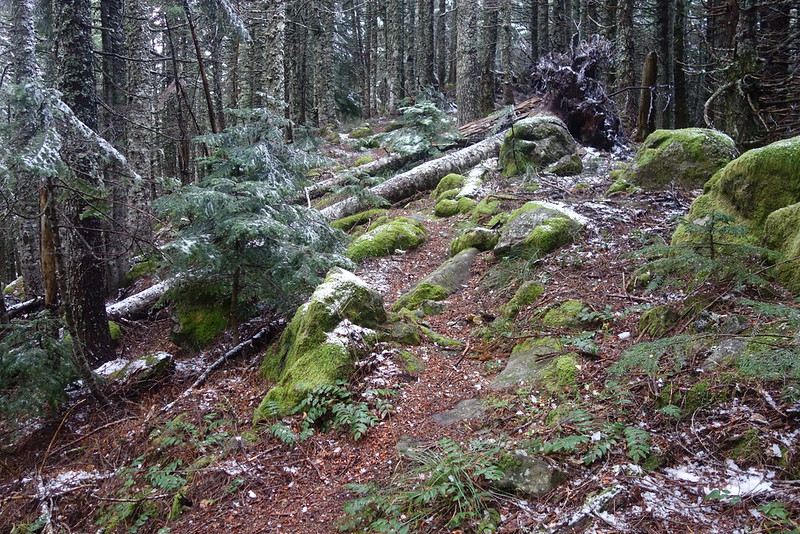 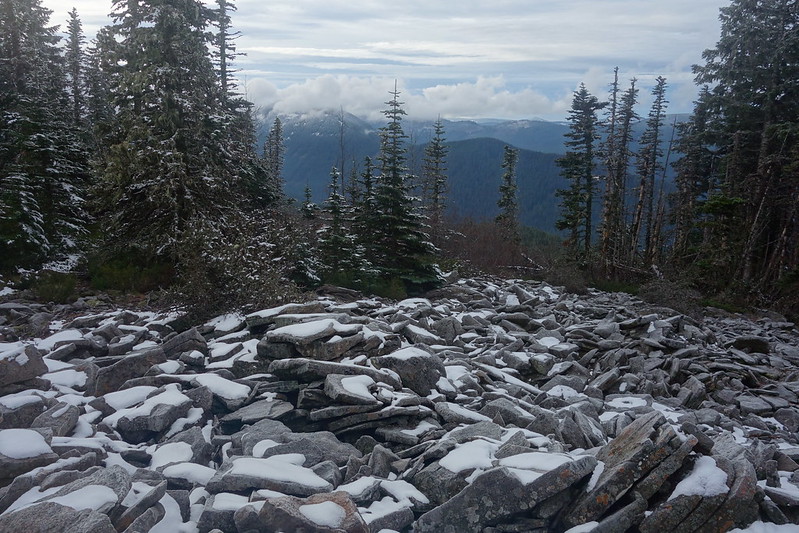 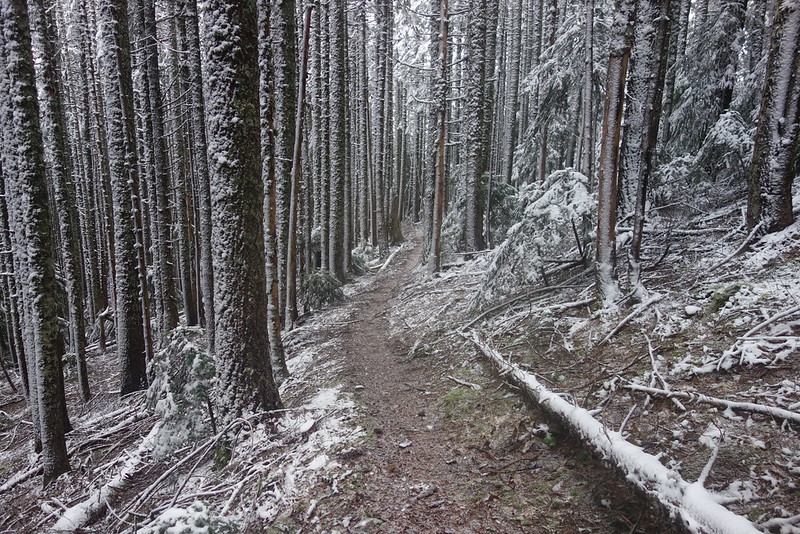 Then, not a mile later, I stopped again, to put on another coat, and to wonder, heretically, if maybe running shorts were not the best idea. (Sorry, Sean.) 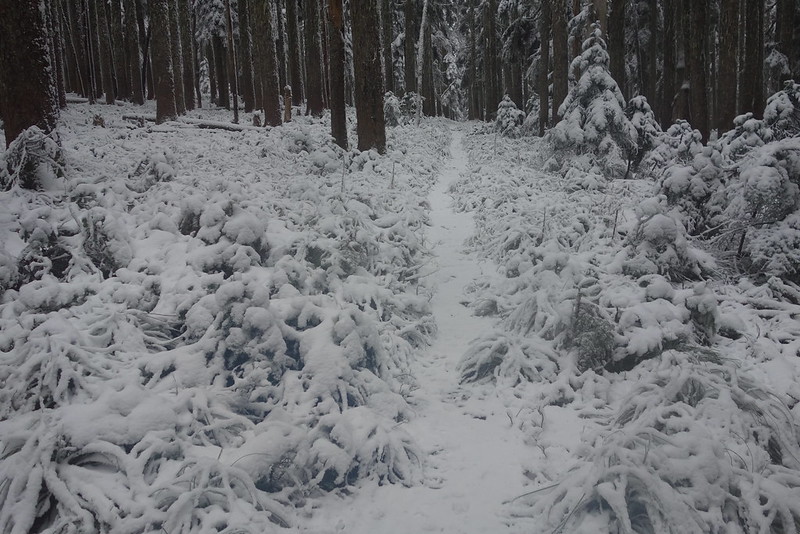 The wind got more and more insistent, until, on top of Greenpoint Mountain, it was nearly strong enough to blow me over. I don't know if it was snowing, or if stuff was just blowing off the trees, but things felt a little dicey for a while. They improved, though, as the ridge flattened out, and I had a nice early lunch, hunched in the old hut just south of the mountain. 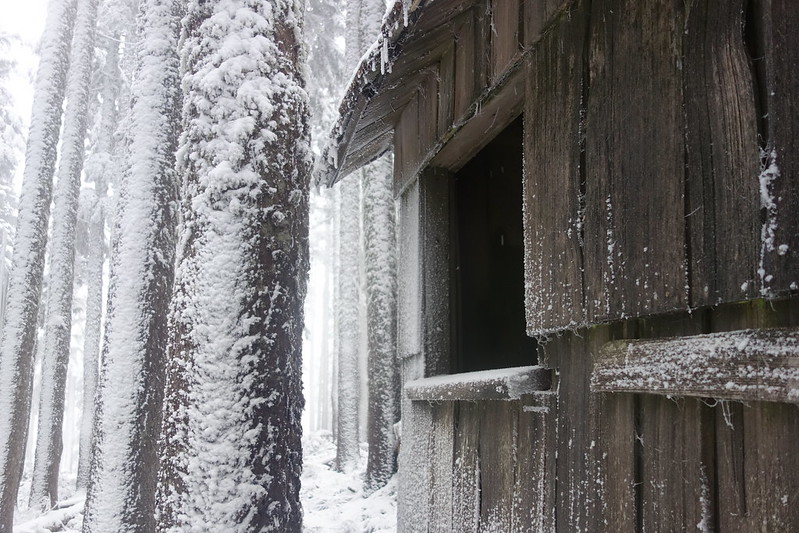 I put my camera away for the next couple miles, walking through the deepening snow and thickening clouds on Rainy-Wahtum. There were no human tracks, but there were an absolute riot of them from animals: a rabbit, a bunch of deer, perfectly circular paws of what I presume to be a big cat, the wide pad and dainty toes of a bear... It felt sort of cool to be making my way through the storm on their trail.

Things mellowed considerably as I turned off onto the Anthill. Herman Creek was untracked but easy to follow, and there were even a couple footprints on the PCT, heading up to Chinidere. And the views came out to say hello too! 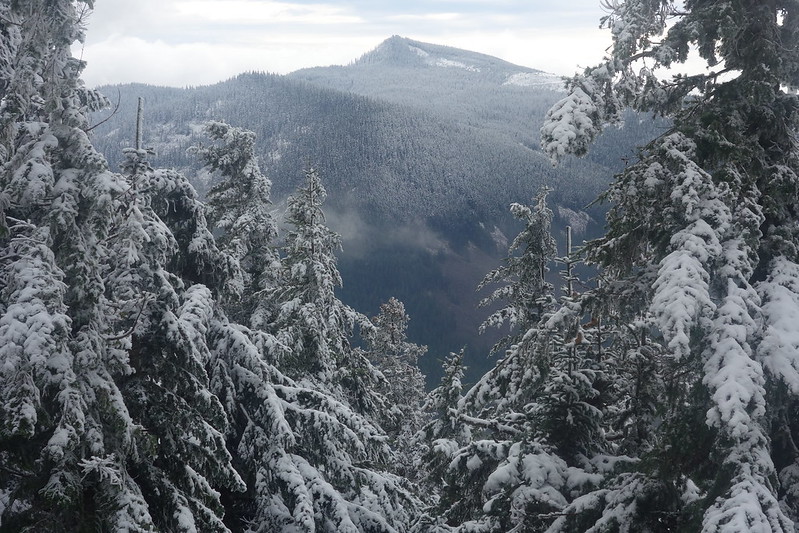 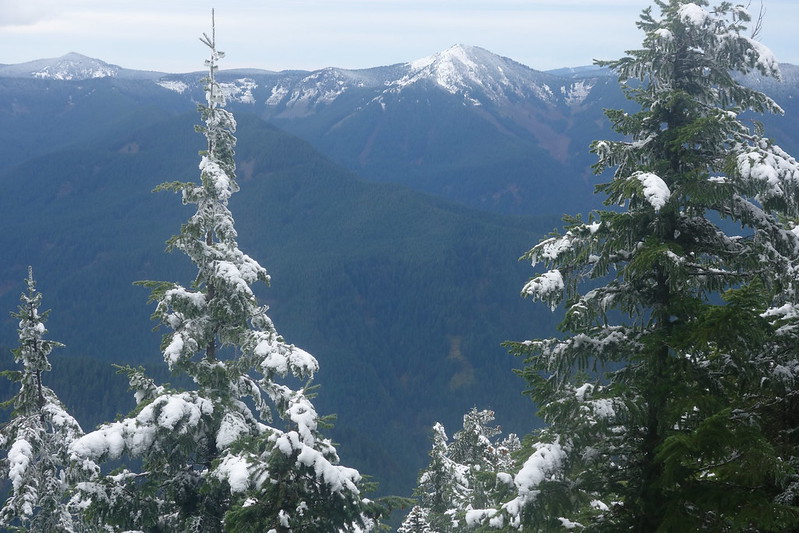 The snow disappeared almost completely on the descent down to the Benson Plateau, and the sky cleared still further, affording great views across the west for of Herman Creek to Tomlike and the Woolly Horn Ridge, and even, briefly, south to Hood. 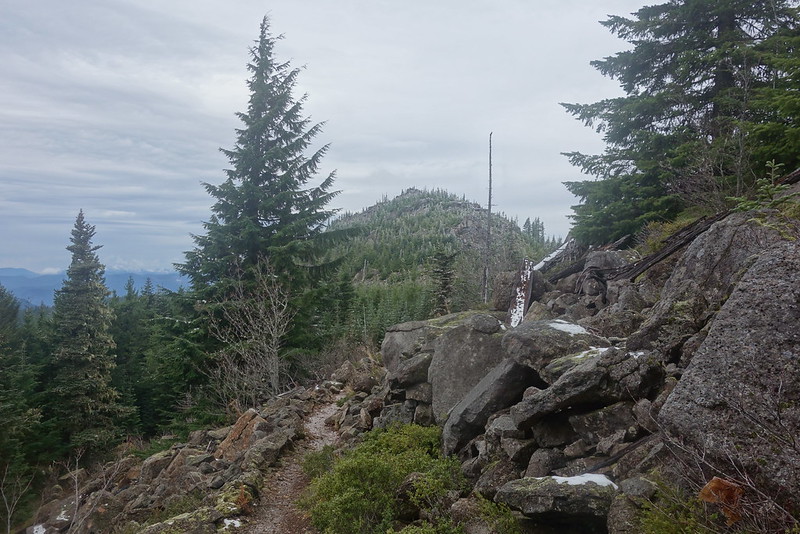 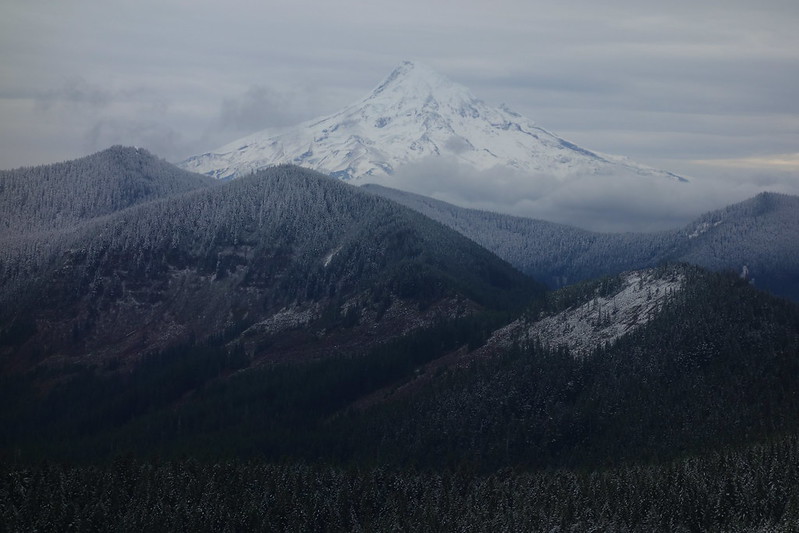 Walking back through The Platter was pleasant as ever. I don't know why - the trail's in no way exceptional - but I always find this stretch exceptionally enjoyable. I think it's something about the easy, gentle hills. Cruiser miles. 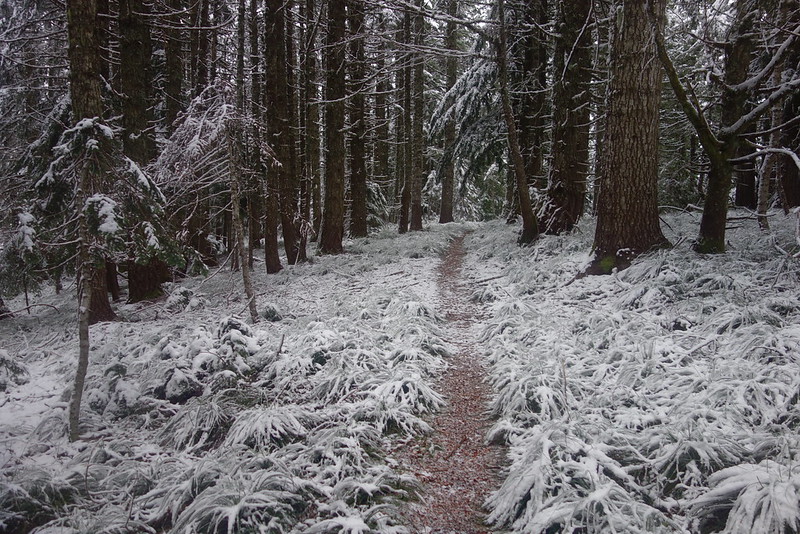 The wind returned as I descended toward Herman Creek, and stuck around almost all the way to the bridge, where I paused to put on a headlamp for the last mile or so back to the car. I finished in the dark, but just barely, and was happy, as I always am in the gorge, to find it untouched.
Robin

Your photos are beautiful!!! I love snow on pine trees!

Do you have GPS track? I can't quite picture your "loop" without consulting a map, which I don't have at the moment while at work...

“Look deep into nature, and then you will understand everything better.” –Albert Einstein
Top


maobie15 wrote:Do you have GPS track? I can't quite picture your "loop" without consulting a map, which I don't have at the moment while at work...

The ridge on the left is Nick Eaton, turning into Waucoma, and the ridge-type-thing on the right is the Benson Plateau. The center hump is the Woolly Horn, surrounded by the east and west forks of Herman Creek.
Robin