The Siskiyou Crest Trail - which circles the Red Buttes Wilderness to the S and W - is an amalgam of different trails, including the PCT. We have been enjoyably cherry-picking hikes involving the S-B trail for several months now (Boundary TR). On most maps and in the USFS literature, the northern terminus of the S-B is at Windy Gap just N of Grayback Mountain (Grayback TR). It always seemed odd that the trail would just end at some saddle in the mountains. So I dug a little deeper and discovered that this abrupt end was true up until 2006, when the BLM and volunteers from Williams, Oregon finished a trail from outside Williams up to Windy Gap (BLM guide) - thus extending the S-B for almost 50 mi from Cook and Green Pass to Williams. None of the topo maps, and only one of the guidebooks, for this area seem to be aware of this trail so, of course, we had to go explore it. 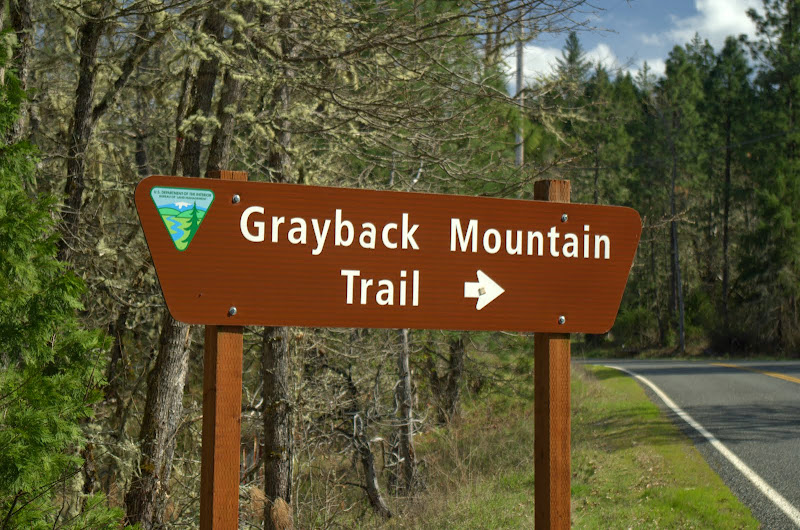 The TH is easy to drive to, but is a little confusing on arrival. There's a "lower" TH, 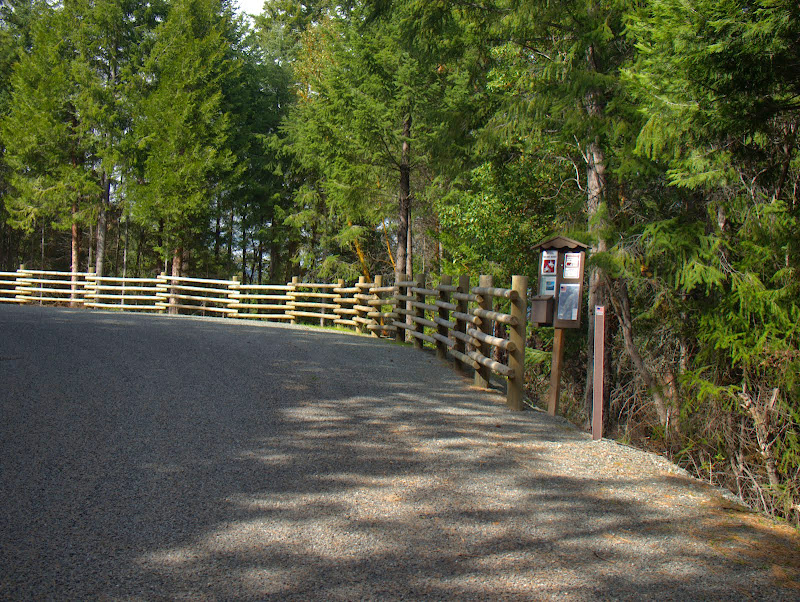 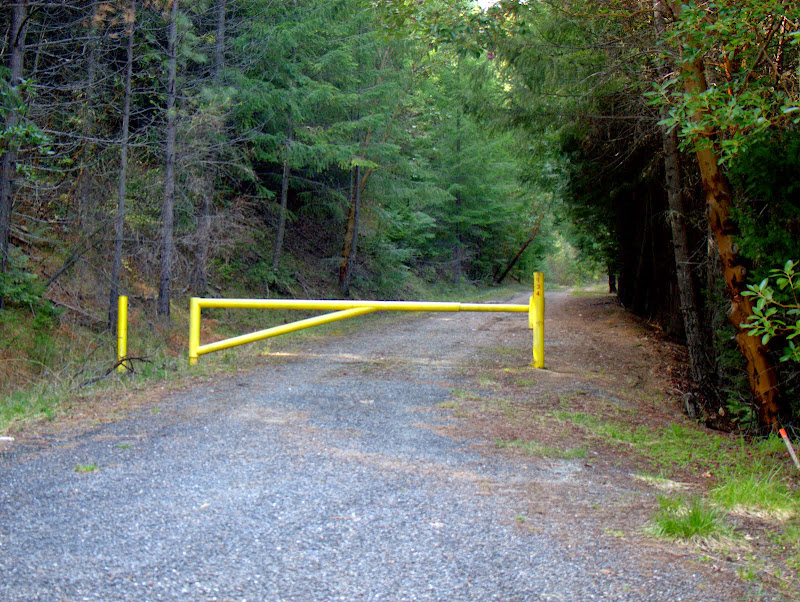 the difference being that you can take either the (not particularly interesting) "lower" trail from where you park or walk up the road beyond the yellow gate to the actual "upper" TH - we opted to walk up the road, 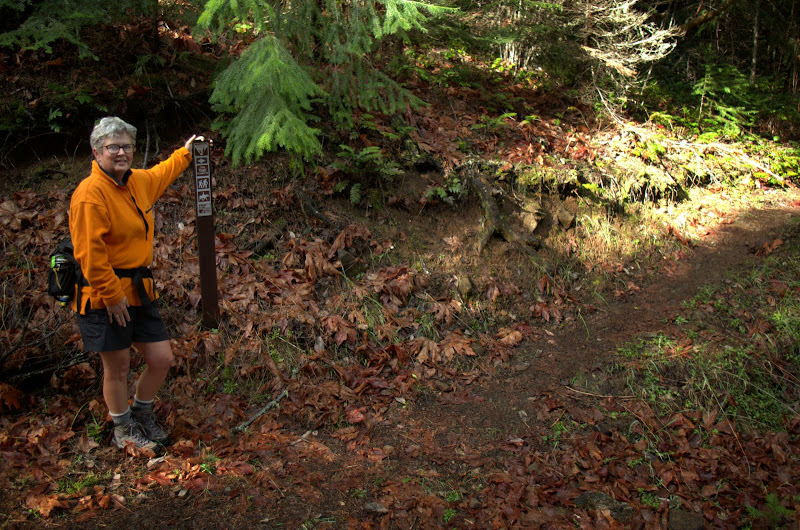 and then 50' up that trail to a junction, where the trail to Windy Gap goes left and the trail from the "lower" TH comes in from the right. It's a great trail but its signage leaves a lot to be desired. 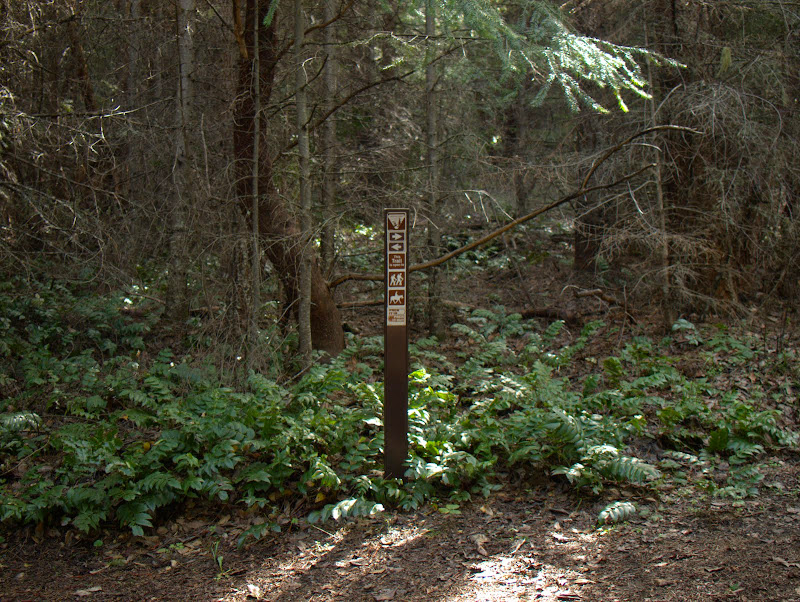 The trail climbs steadily, but easily, up through stands of pine and fir 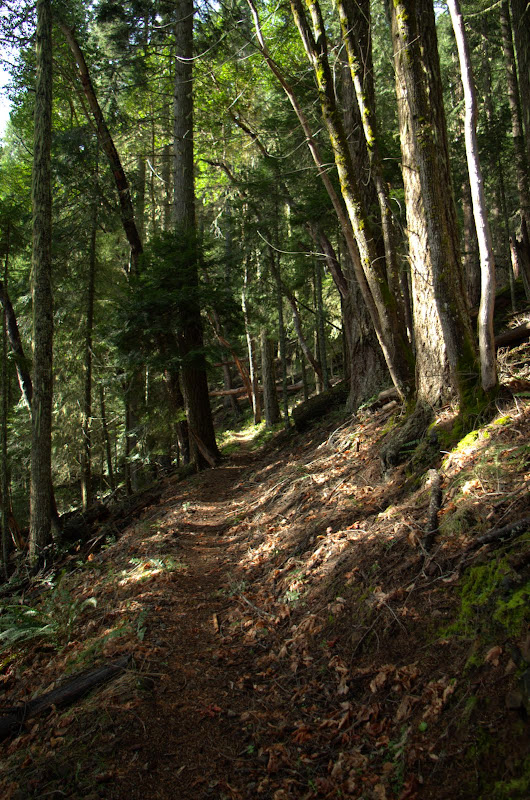 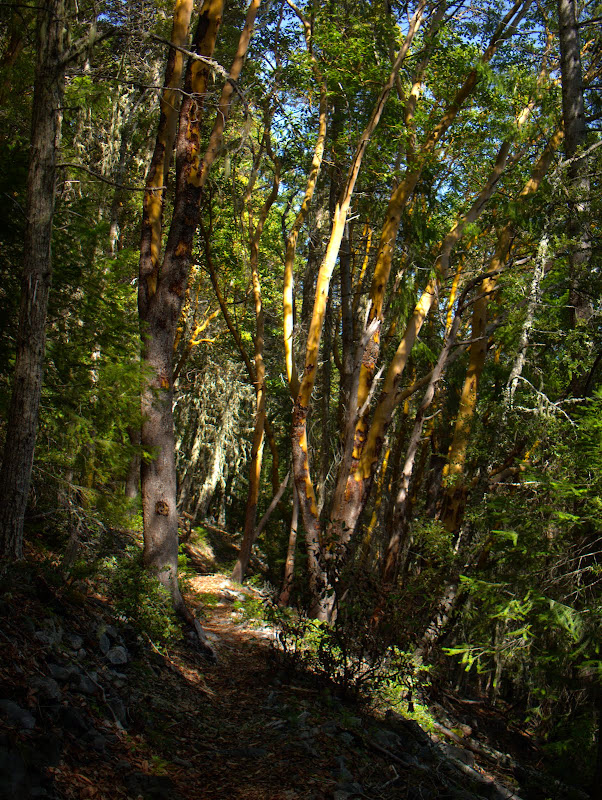 Higher up the understory thins out, 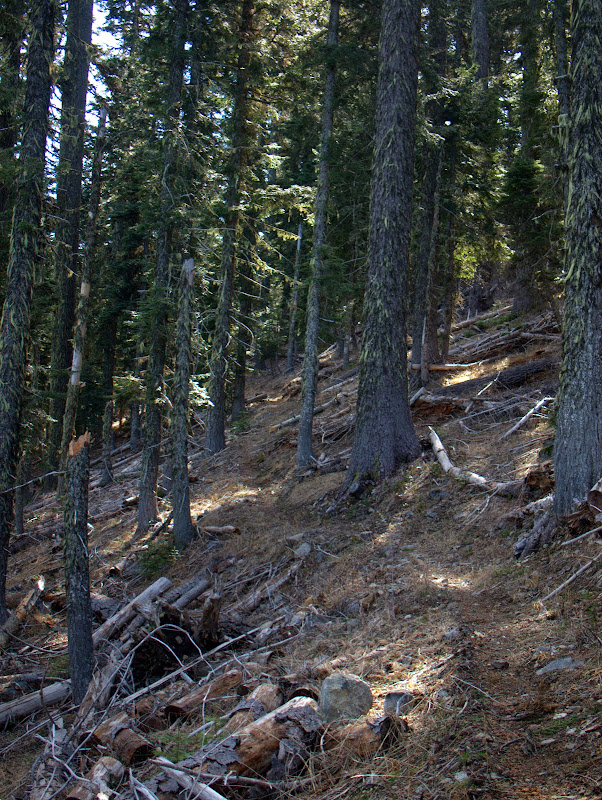 and there are occasional views of the ridge you're ascending and of the Applegate Valley beyond. 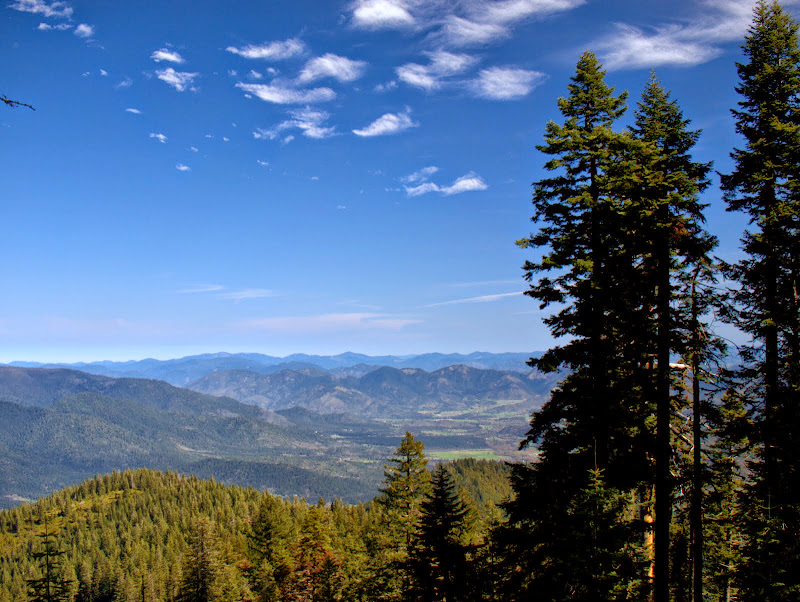 There had been a brief storm a couple of days before but we didn't hit any appreciable snow until 6000', 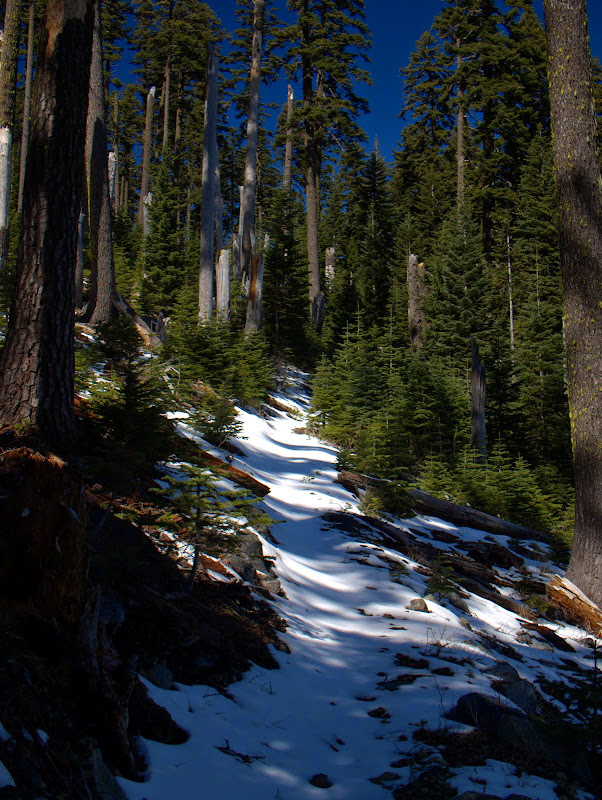 which let us know that we weren't alone in the woods and highlighted the possibly thin line between predator and prey. 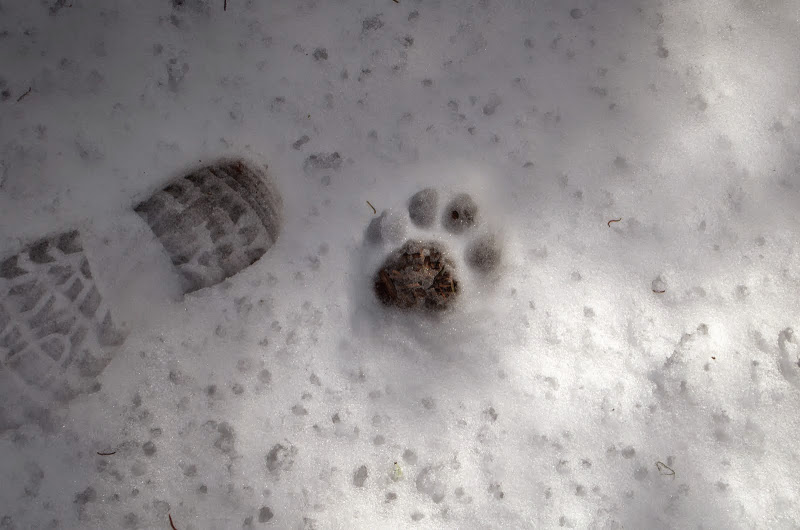 The morning got off to a cold start, which may be why this little guy survived - but 45 minutes later, as we passed it on the way out, it had fallen. 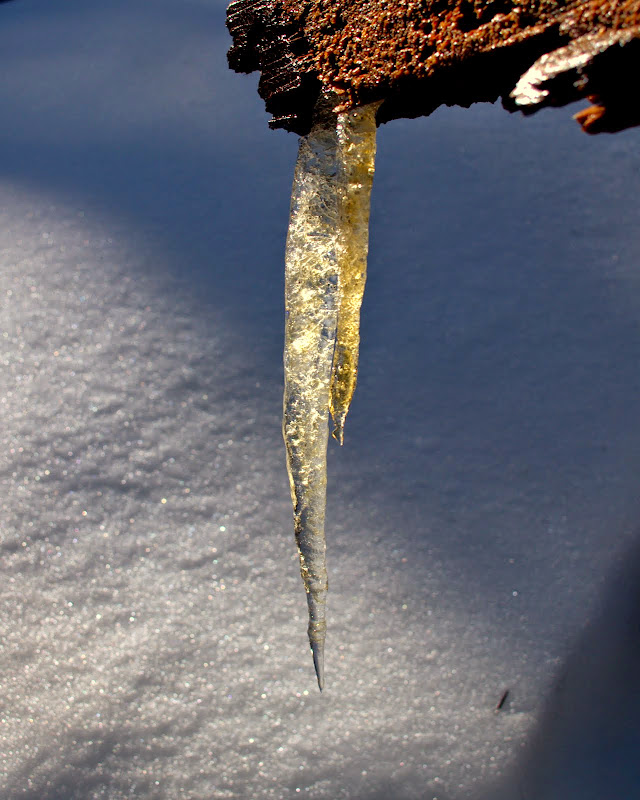 This trail ends at Windy Gap, 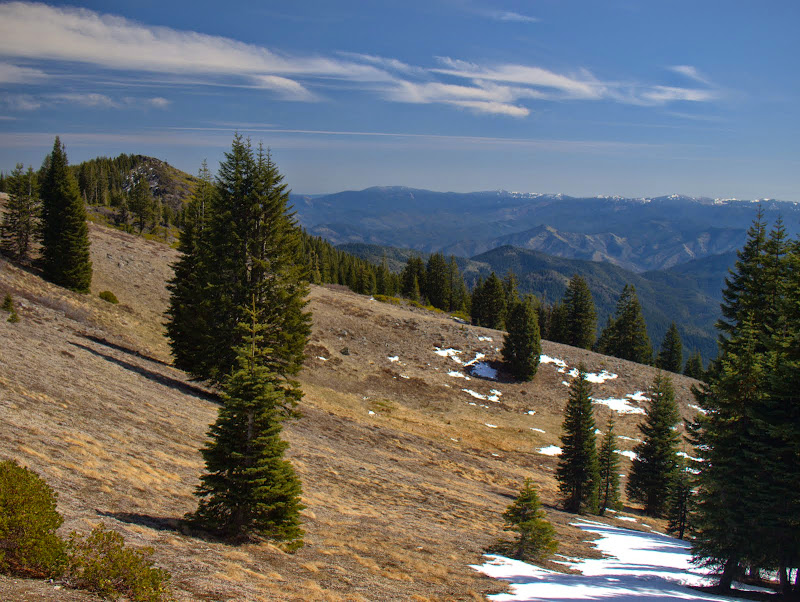 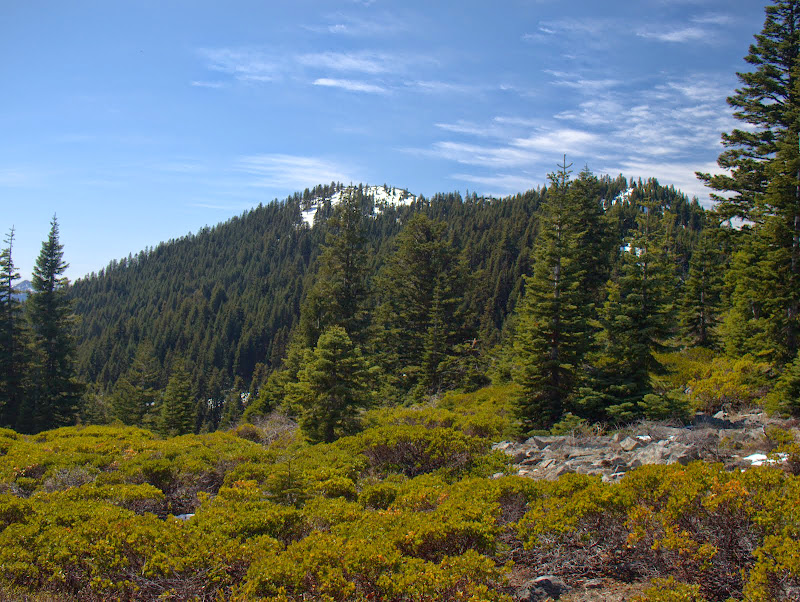 and on the flanks of Big Sugarloaf Mtn, which is where we had lunch. 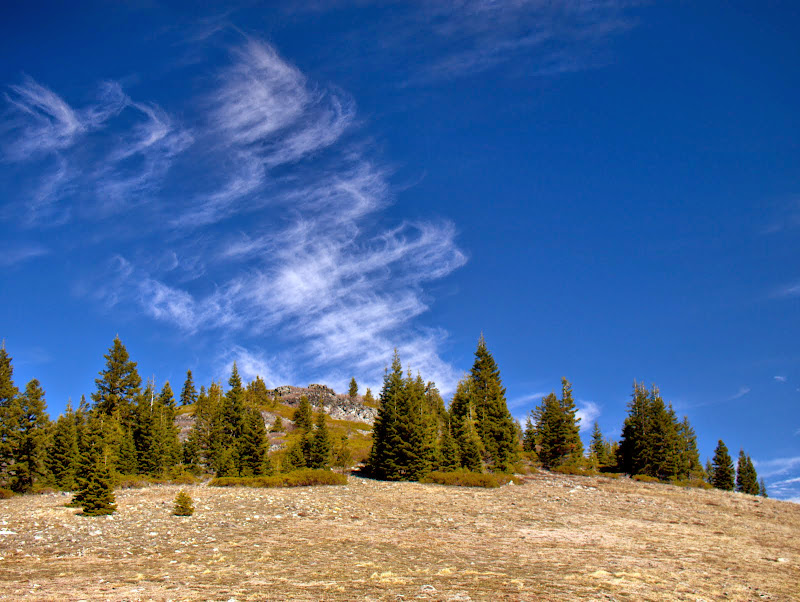 This is a well graded (3600' EG in 7 mi), easy to follow trail that is mostly in the woods until it reaches Big Sugarloaf, at which point the views are astounding! To the NE,
Bailey (B), Theilsen (T), Crater Lake (C), and McLoughlin (M),

then, continuing S and W, McLoughlin (M), the Gearhart Wilderness (G), and Mt. Ashland (A), 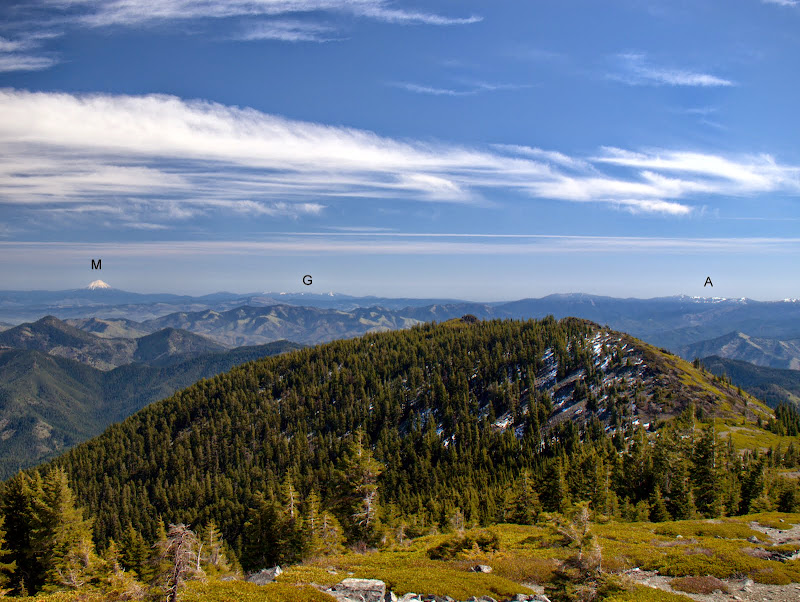 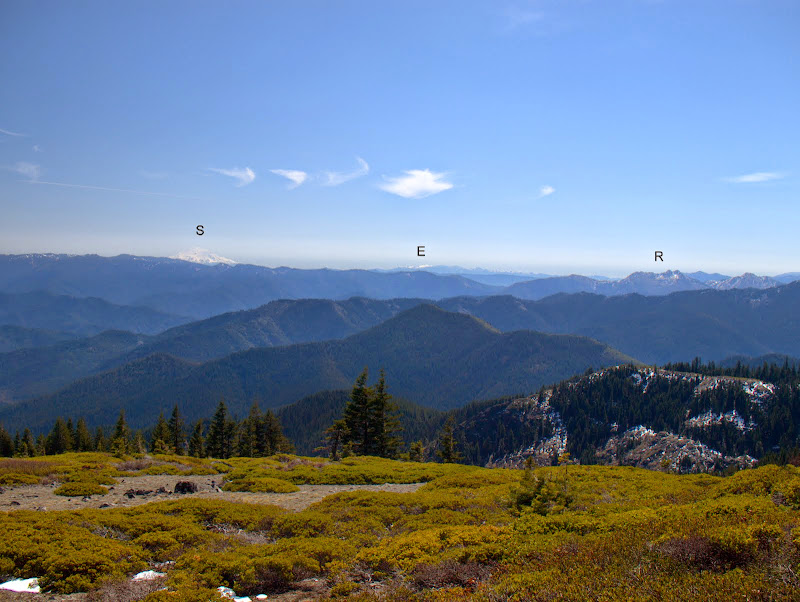 then the Red Buttes again (R) and the Trinity Alps (T) on the far horizon. 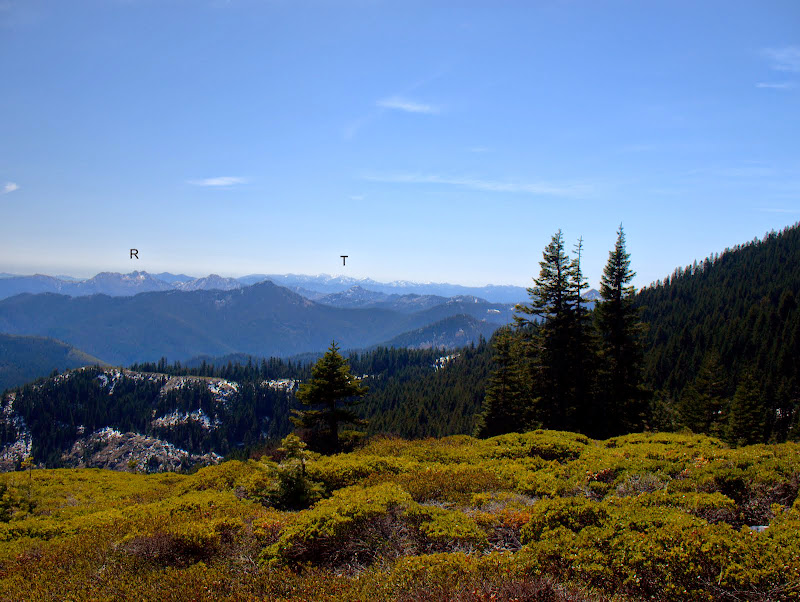 It was clear enough to see Roxy Ann Peak (arrow), a popular Medford park not far from our house. 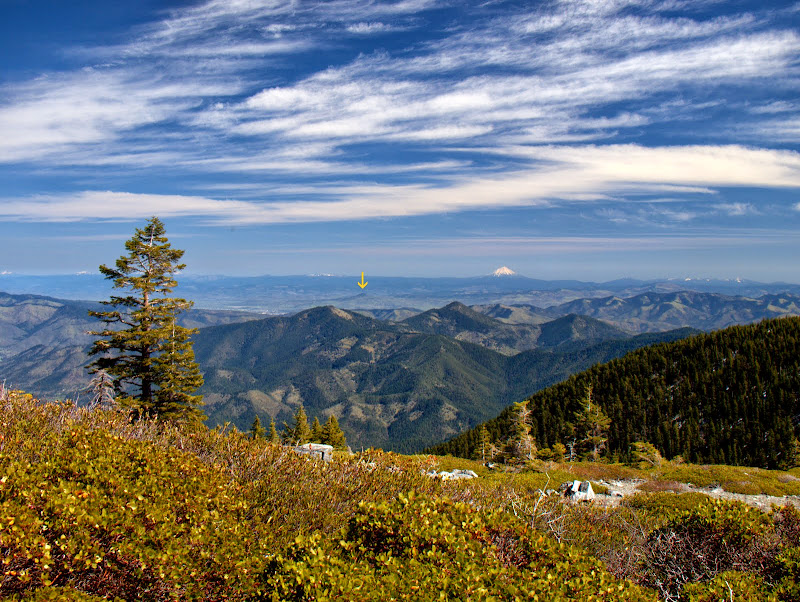 And then, tearing ourselves from the view and the warm sunshine, we headed back to the TH. Great hike (15 mi RT, 3600' EG); amazing viewpoint! Wouldn't recommend the trail from the lower TH to the junction unless you really don't want to walk on a road. 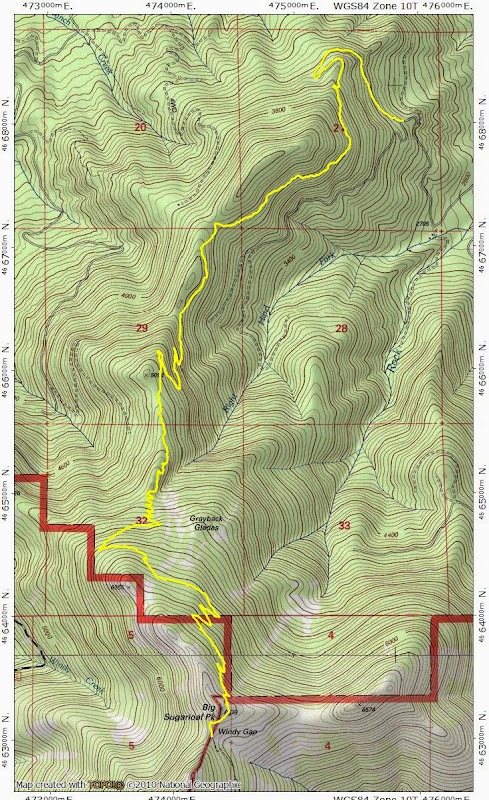 Wow, the summit area of Big Sugarloaf looks awesome.
Like a sub-alpine environment.
That view to the NE is tops

Looks Great!Maybe that is one of the ones I will do when I visit my nieces.
Woodswalker
Top
Post Reply
3 posts • Page 1 of 1