Casting about for something new to hike in the Portland area (my plans to go further keep getting thwarted by work), I came across Cinnamon Ridge in the Field Guide. Although a little suspicious of possibly excess horsiness on this trail which starts in the Kalama Horse Camp, I put by trust in bobcat's usually spot on trail descriptions and went for it. It's an easy, paved drive to the TH and, although there were horse trailers around, there were no horses or riders in evidence. I elected to follow the Field Guide and do the loop clockwise, which was the right choice. Shortly after leaving the TH on the Toutle Trail (#238), I passed the only Cinnamon Trail (#204) sign I'd see all day. 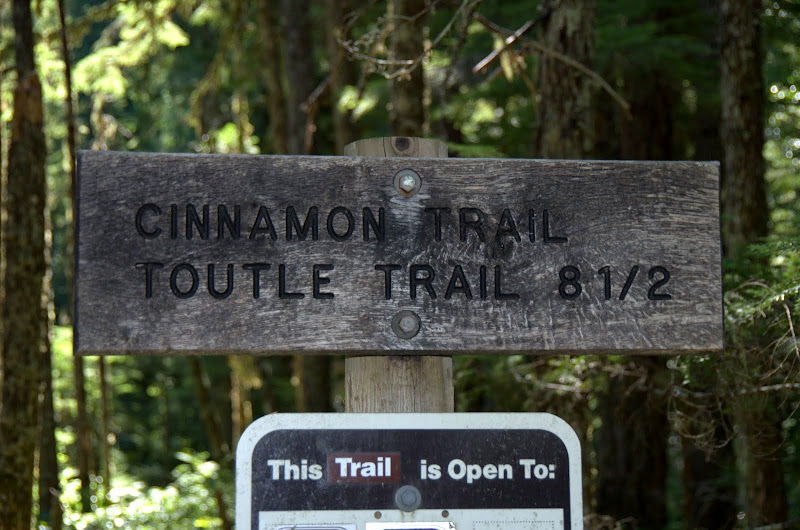 The Toutle Trail climbs gently through the trees, 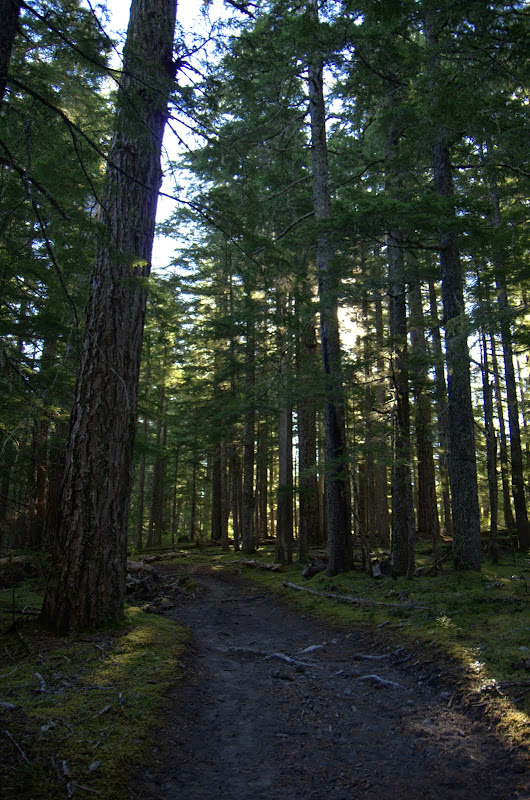 following along the Kalama River, although you can't always see or access the river from the trail. It's pretty horsey up to its crossing of NFD 8022 but after that there's less evidence of horses, and by the time it reaches Rd 600 and crosses to the S bank of the Kalama, it's pretty much a hiker trail. 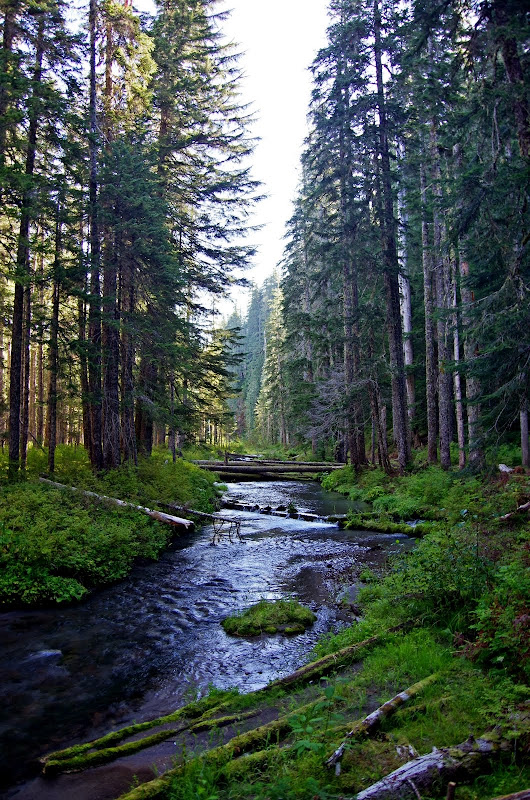 After a pleasant ramble through the trees with limited views, I was almost floored when I came out of the trees at the W end of what was McBride Lake and got a huge, full-on view of Mt. St. Helens (the Field Guide doesn't really mention this first big view). Amazing! 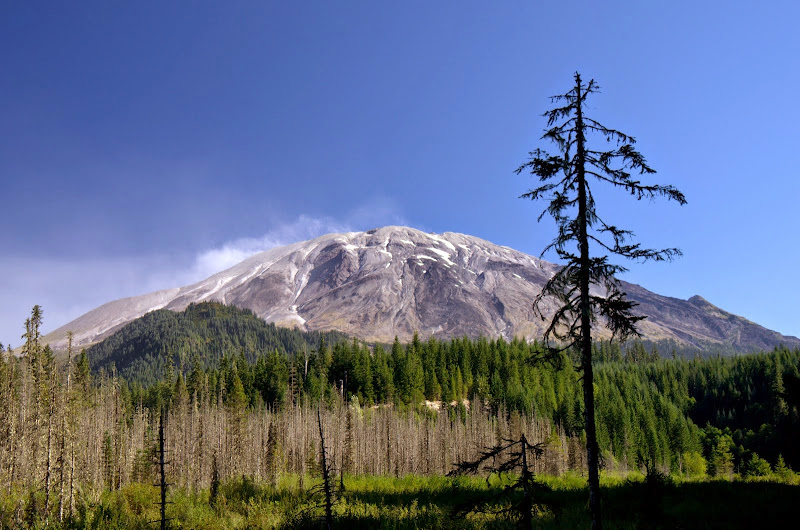 What I though was steam or smoke coming off the summit turned out, on closer inspection, to be dust particles. It was a perfect cool, clear, but breezy day down where I was but my guess it that winds aloft were a lot stronger. 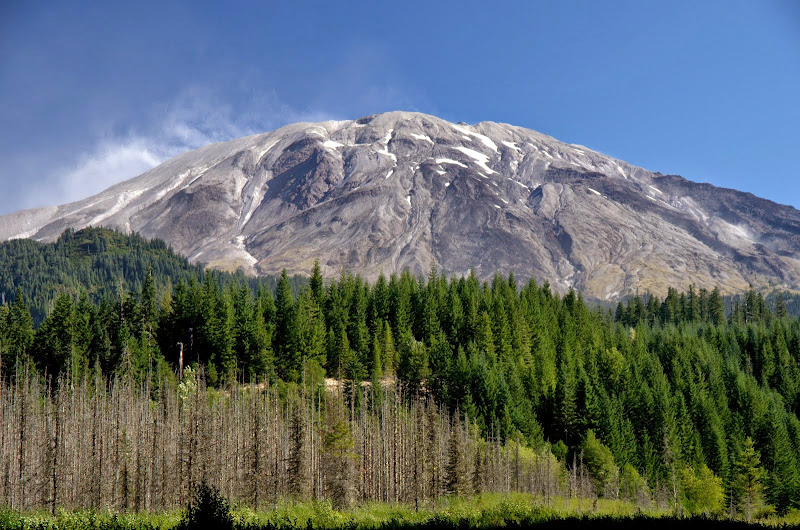 After recovering my composure, I pressed on to Redrock Pass and then a little ways N into the lava field for yet another big view of Helens, 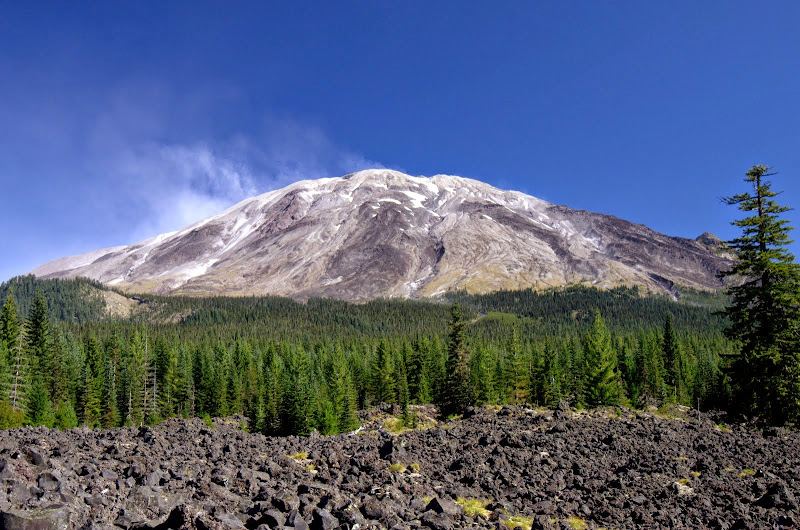 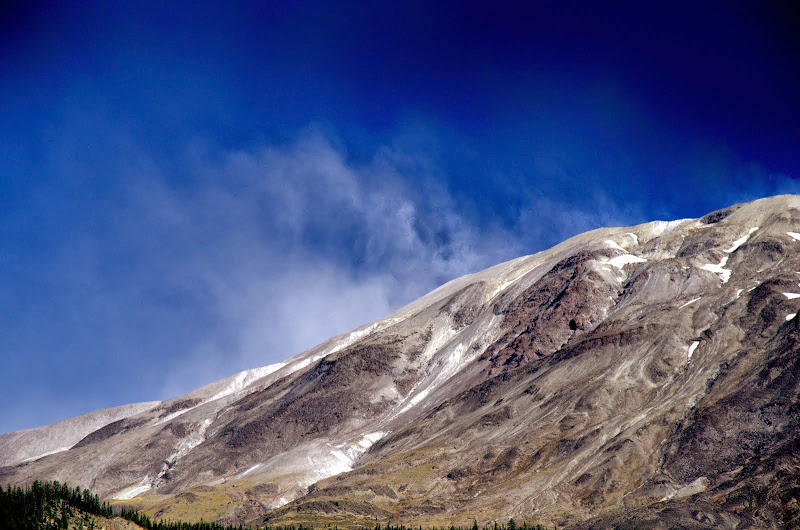 There's no sign at Redrock Pass for the Cinnamon Ridge trail but it's the obvious trail heading uphill from the Toutle Trail about 200 yds W of the pass. It climbs up the face of the ridge, mostly through trees, but there is the occasional viewpoint. As I got higher, Adams came into view - I'd never seen Helens and Adams from this perspective before. 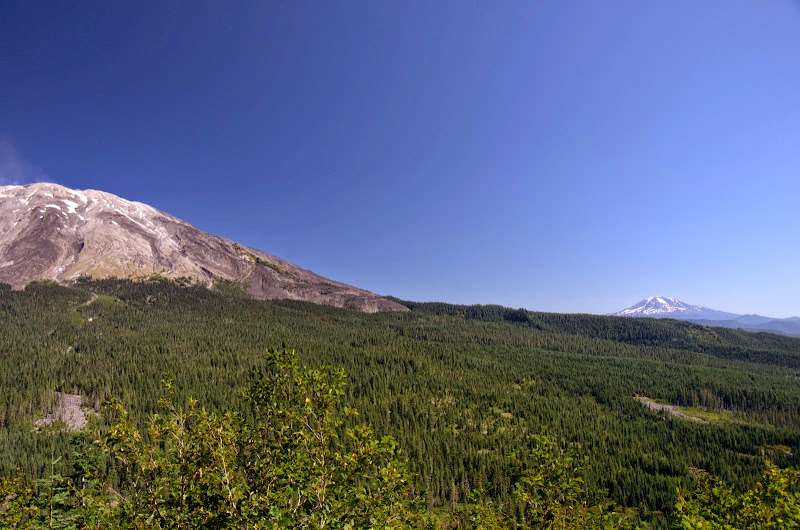 The trail up on the ridge was clear and easy to follow - in fact there was only one downed tree on the whole loop and it posed a problem for horses, not hikers. 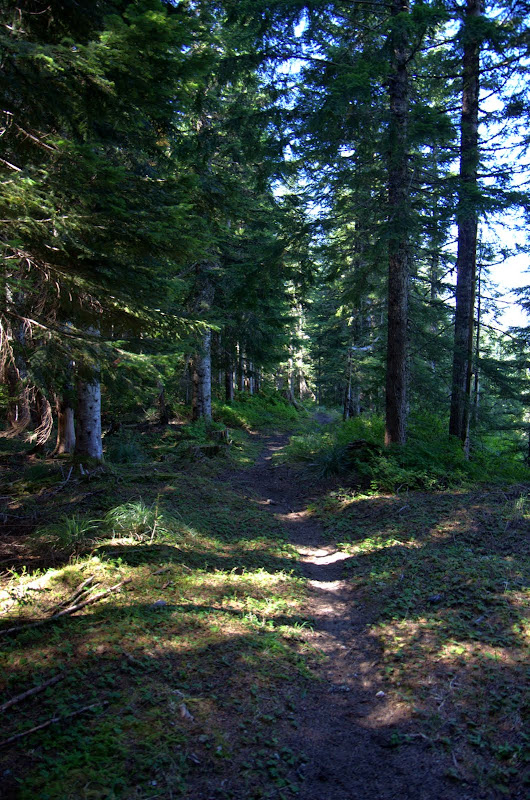 Further along the ridge, I got a distant, and not exactly awe inspiring, view of Hood. 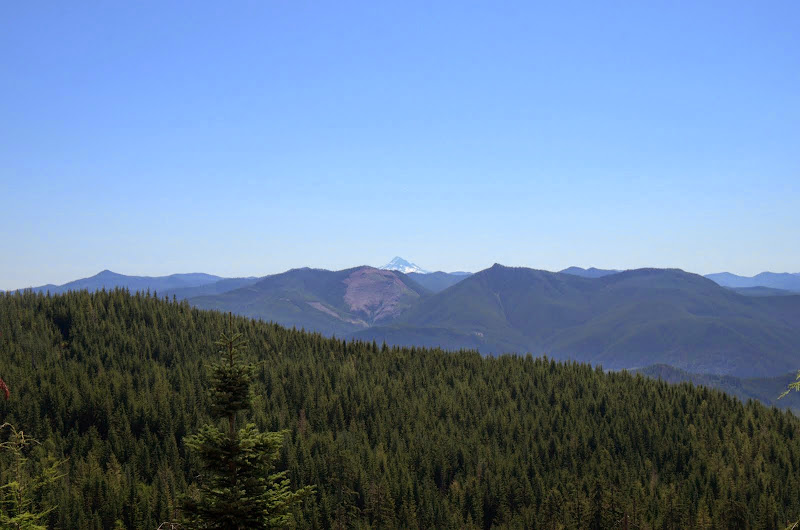 The trail undulates along the ridge, with Helens as your constant companion. 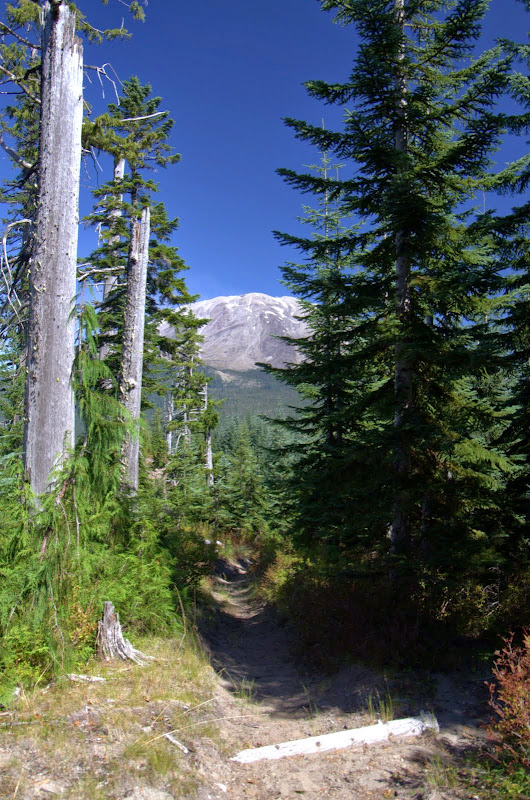 About 1.5 mi from the TH, I got one more excellent view of Helens, 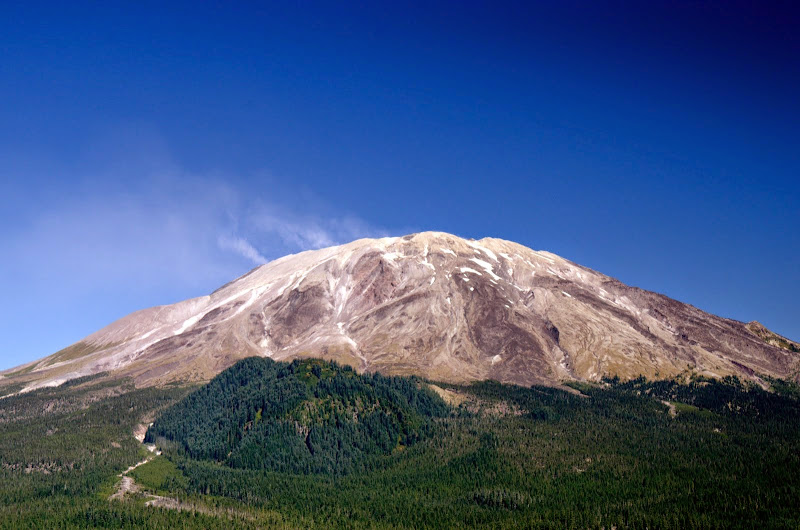 and then the trail headed down, down, down (which is why going doing the loop counter-clockwise isn't recommended) back over the Kalama, 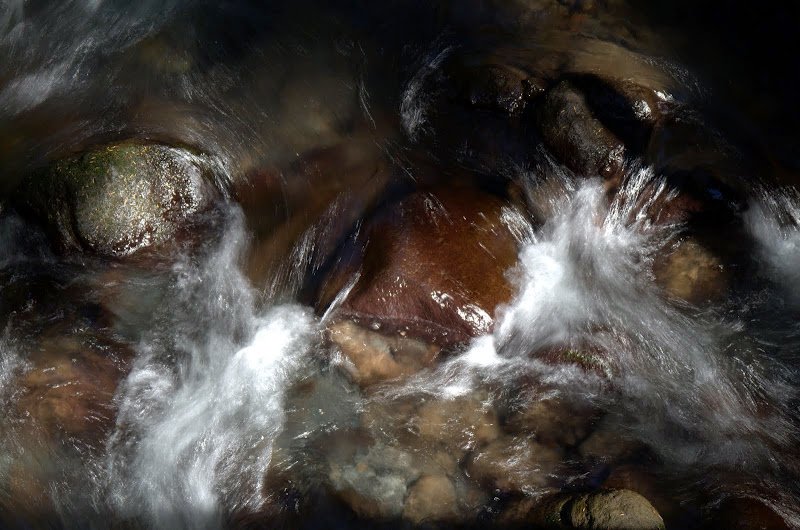 to the parking lot. Didn't see a horse or rider all day - which wouldn't have been a problem for me - but I was thinking that someone would be out riding on such a splendid day? Anyway, a really neat little loop, with great views of the otherwise hard to see W side of Helens. Highly recommended and thanks to bobcat for putting it in the guide! 14 mi RT, 3000' EG.

Nice report! You just put this loop much higher on my list for quickie getaways. (ie, "bookmarked!")

Helluva dust storm going on in the crater, too! Wowsa. I'd heard there were strong east winds yesterday, but never seen it blowing out of there like that. Very cool.
Karl
Back on the trail, again...
Top

I saw dust blowing all around the south side of Hood yesterday while driving past on 35/26. Especially in the White River area.
adamschneider.net/photos · NWWildflowers.com · GPSVisualizer.com
Top

Glad you enjoyed the loop. I've hiked all those horse trails in the Kalama River area and never actually seen a horse and rider on them although there have sometimes been horses and trailers at the Camp and sign on the trails. The trail along Cinnamon Ridge often has one or two trees down which, in addition to its elevation and remoteness, may discourage some riders.

The other reason to go clockwise is that not all intersections are so obvious coming the other way . . .
Top

We must have different ideas of "little"!

bobcat wrote:Glad you enjoyed the loop. I've hiked all those horse trails in the Kalama River area and never actually seen a horse and rider on them although there have sometimes been horses and trailers at the Camp and sign on the trails. The trail along Cinnamon Ridge often has one or two trees down which, in addition to its elevation and remoteness, may discourage some riders.

The other reason to go clockwise is that not all intersections are so obvious coming the other way . . .

I also think that in early winter when the snow line gets down to 4-5,000', this trail would still be accessible and you'd get some great views of a snowy St. Helens.
Top
Post Reply
6 posts • Page 1 of 1