Accessing the Indian Heaven Wilderness from the S (along the PCT from Crest Camp) adds about 6 mi RT to any hike into the wilderness. I noticed that NFD 240 runs N along the E side of the wilderness and I got to wondering whether it could be used for more expedient access? The road comes within 0.3 mi of Spring Camp - which sits in the SE corner of the wilderness along what is now the long abandoned Cascade Crest Trail (CCT) - and it seemed like getting from the road to the CCT and then to the PCT would be pretty easy. Yesterday I went to test this theory in the field. I'd hoped for the requisite bluebird day but the wilderness chose to dish out an early taste of Fall instead. There were a few (a very few) sun breaks and the theme for the day was damp, cold, and gloomy. NFD 240 was in good shape up to 3700' where it was washed out for just 100' - enough to preclude access by my sedan and to get me walking. Of course, after that 100' of wash-out, the road went back to being in great shape. 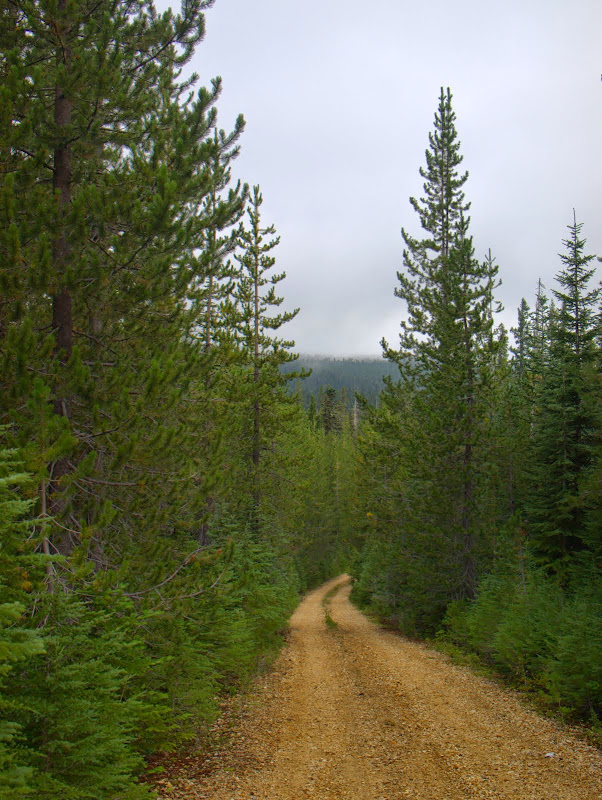 Just before the creek coming down from Spring Camp, I turned W from the road and worked my way along the S edge of a large, somewhat swampy, meadow. 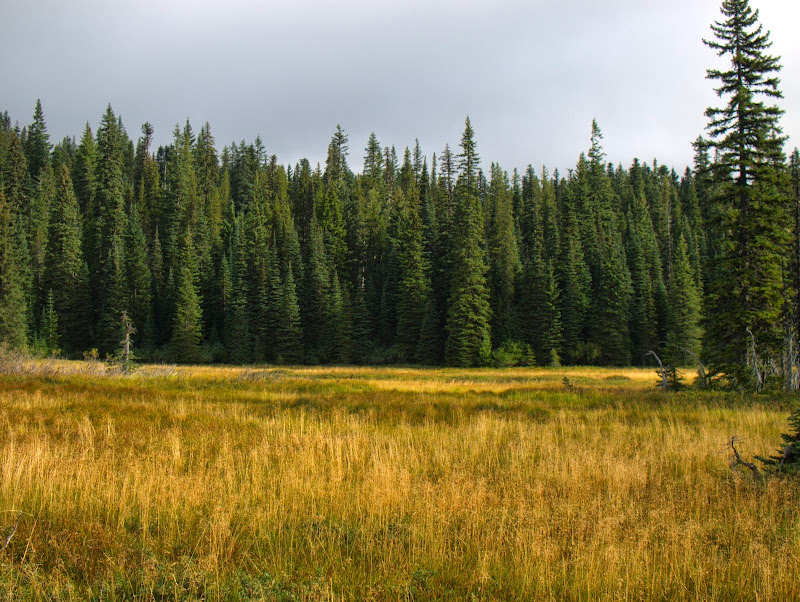 Pretty quickly, I came to the old CCT and turned N on it. It might be easier to continue a little further along the road (to the 240 / 246 junction) and then go for the CCT N of the meadow. The CCT in this area is still pretty easy to follow but there is more blowdown than there was just 2-3 years ago and a few spots are sketchier than before. 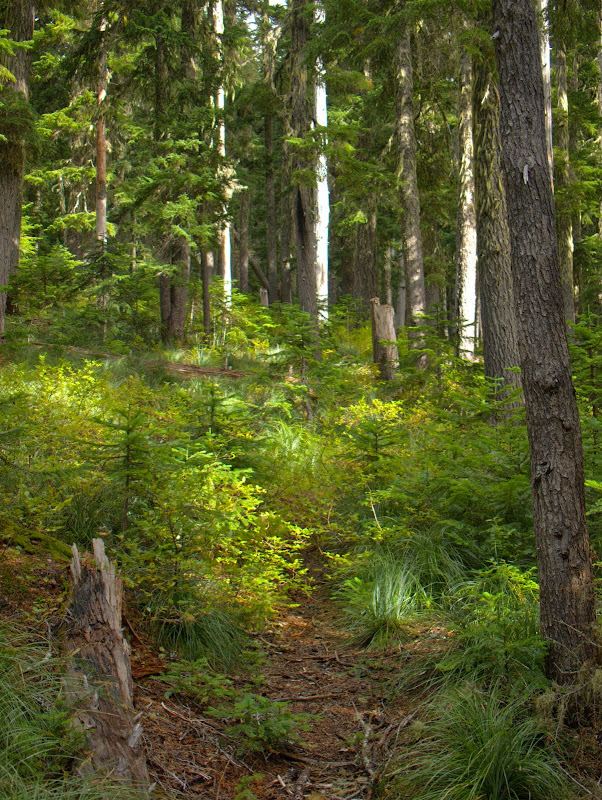 Just going from the road to the CCT wasn't enough for a hike, so I took the CCT to Blue Lake, then the 111 trail to Rock Lake, and then more of the old CCT up to Bear Lake. Along the way I had a stare-down with a coyote, who was standing guard as his mate hurried several young coyotes through the meadow behind him. 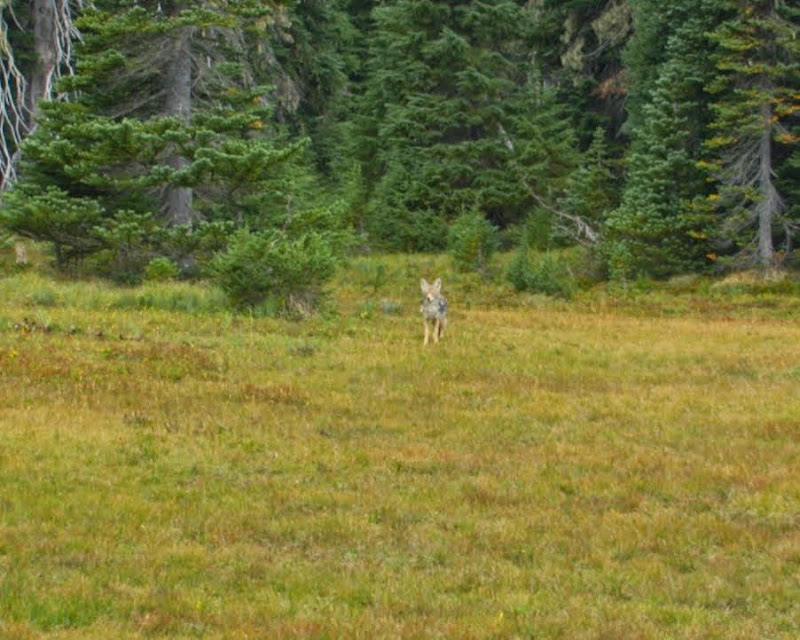 I circled back to Junction Lake for a quick lunch in the gloom and then continued S on the PCT. 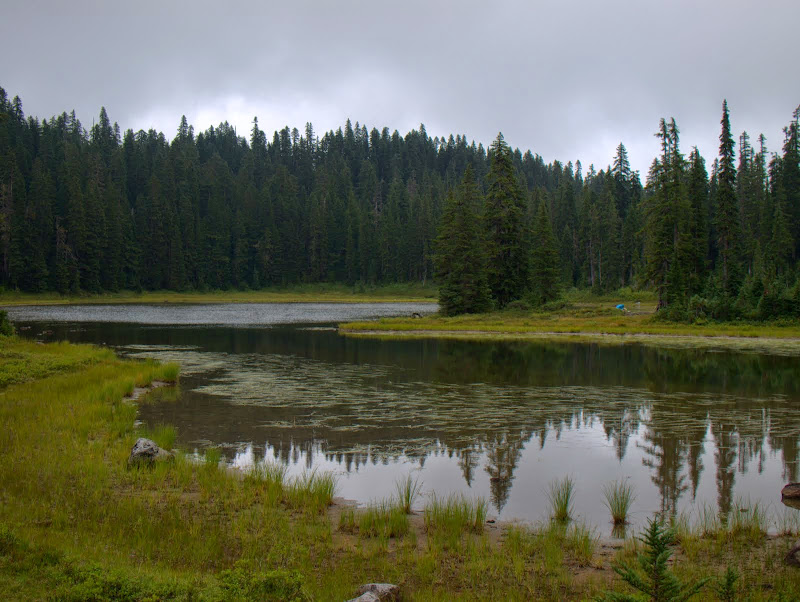 The wind was pushing clouds and mist over Berry Mountain, whose orography then wrung the moisture out as rain or a very thick mist - pretty chilling for the last day of August! 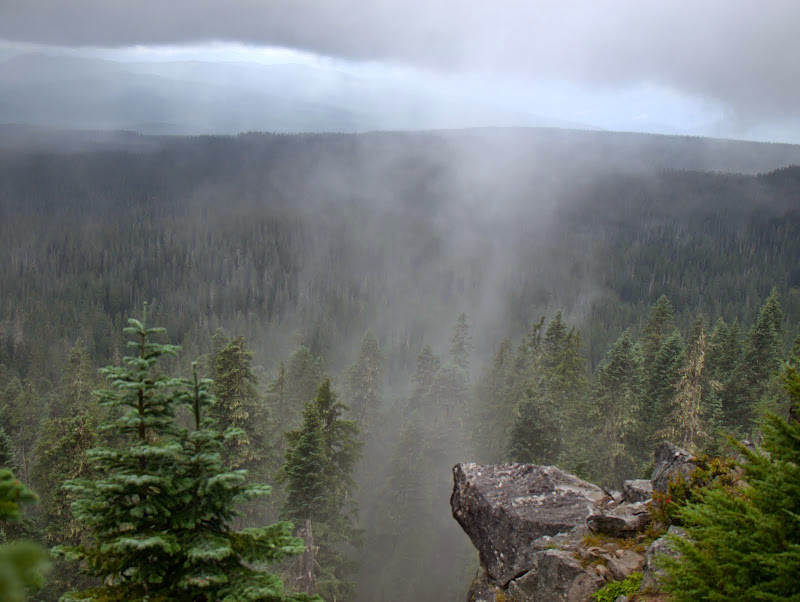 I took the PCT S to its junction with the Indian Racetrack Trail (171A) and then turned due E for a XC trip back to NFD 240. I was aiming for some old logging roads (775, 776) shown on my map but found only clearings and stumps. I also found a fairly steep slope along this track, thus making it a lot less attractive than the track I followed in the morning. This tree massively infested with fungus was the most colorful thing in the forest on the way back. 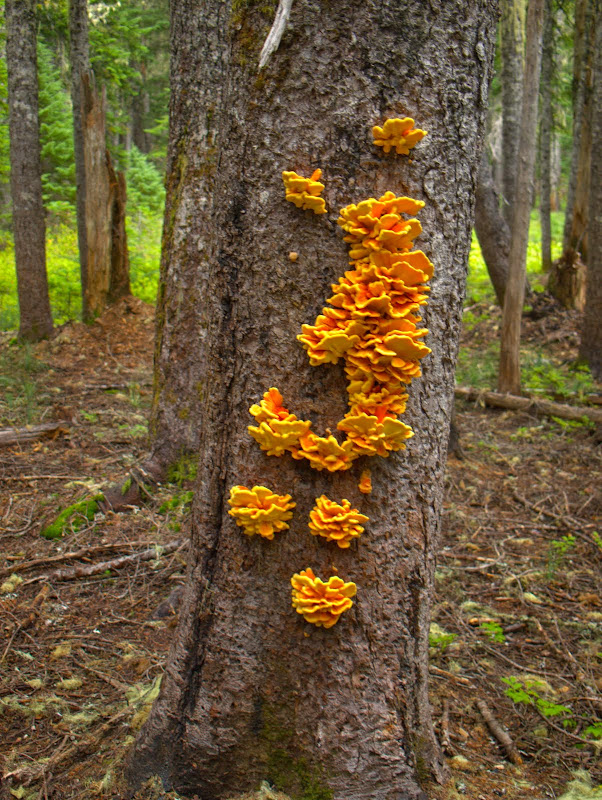 Nice detective work Van and good to know about access from the 240/246 junction hitting the CCT north of the meadow. Cool coyote sighting too!
Top

This solves a long story for me. In the late 80's my son and I hiked into Blue Lake from the Thomas lake trail for two nights. While there I got talking to another father camped there with his son, while the sons were both making "rafts" of logs and floating them on the lake.

He told me they had come in by way of a logging road and up the old trail to Tombstone lake and Blue Lake. He had been hunting in the area for years and always came up that way. He said there was a trail leaving the logging road at a sharp turn to the east. This was the same trip I went south from Blue Lake and found the trail dropping into the Darlene lakes basin. I had gotten down in the basin but lost the trail in blowdown and backed out before I got too turned around. So I was not up for another exploration. Bad decision in retrospect.

Later in the early 90's I followed the trail south from Tombstone for some distance until the trail got sketchy and baked up. The next try a few years later was following what is now Road 240, but found nothing.

The grade on that route should be milder even than from Thomas and shorter if headed to Blue Lake.
Top
Post Reply
3 posts • Page 1 of 1