My last hike of Huffman Pk resulted in a spectacular view of the inside of a cloud but little else (Huffman 2013) - so I vowed to return some day. Yesterday was that day. The sky was rent by bolts of lightening and my car was lashed by torrential downpours as I drove through Battle Ground toward the TH - but I pressed on. By the time I reached the TH, these atmospheric theatrics had subsided into a gray overcast. Knowing that I'd have to cross the creek, and having learned about creek-hopping on a recent hike of Elk Ck (Elk Ck Loop), I left the TH sporting a nifty new pair of water shoes (to be replaced with boots after the crossing). 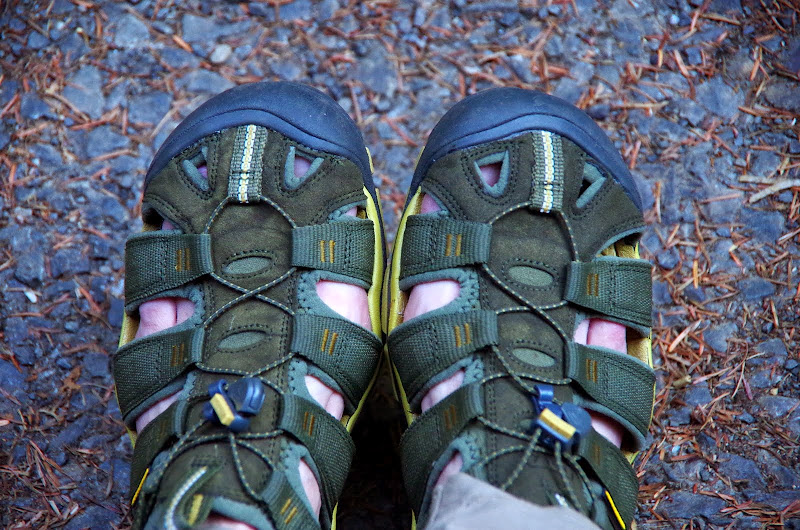 The crossing was uneventful - shallow and slow over very slippery rocks. 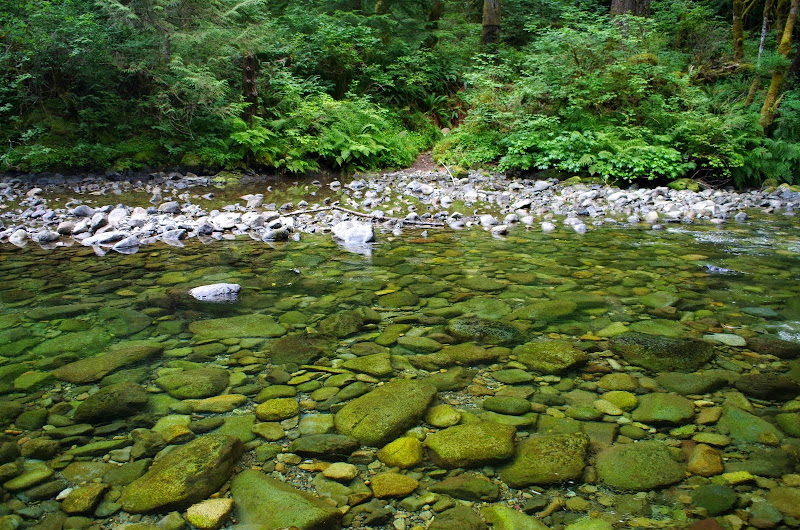 After that, it was a long climb up the Huffman Pk trail (Tr 129) under leaden skies - not very promising for views. 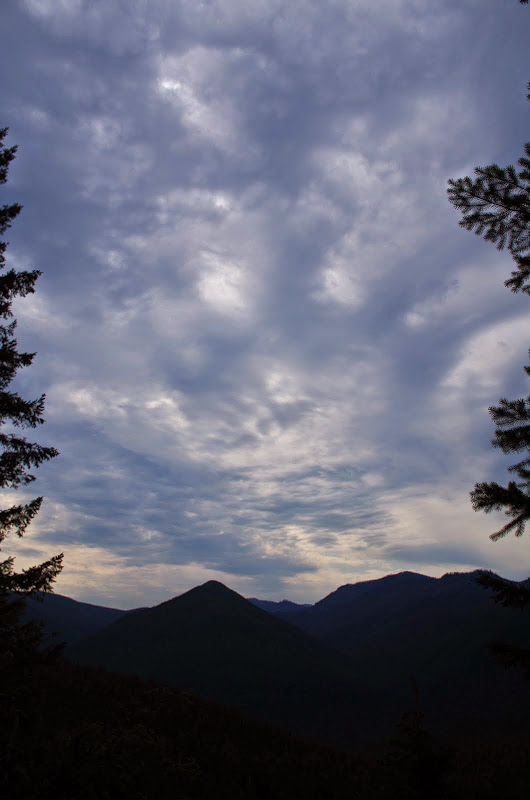 But by the time I reached Huffman's truncated summit, the clouds had parted, the sun was shining, and it was HOT! 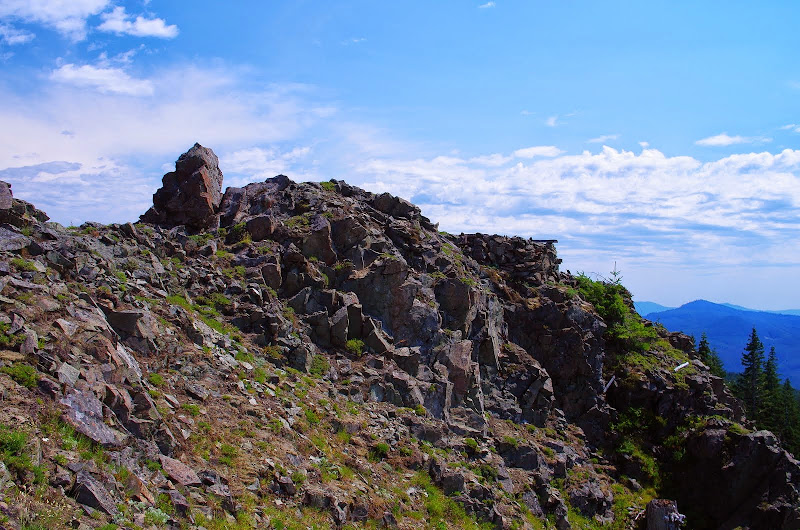 Siouxon Pk’s bare top was visible to the E, with Adams lurking behind it in the haze, 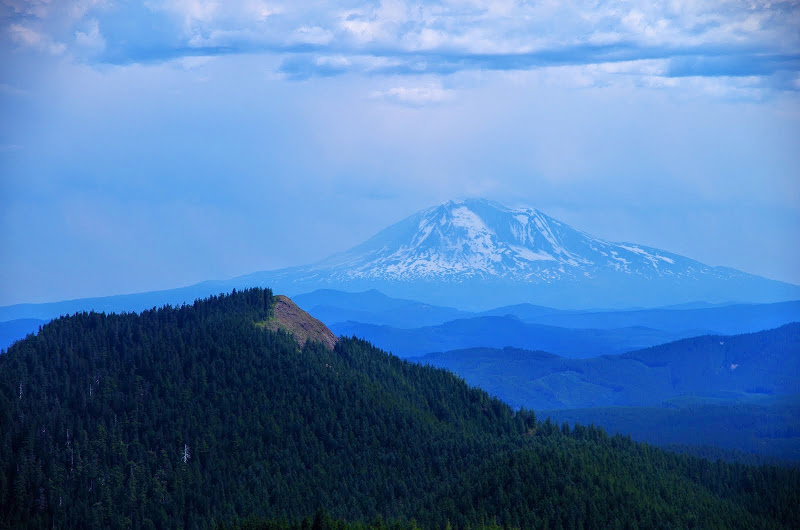 and St. Helens and Mitchell Pk were in view to the N. 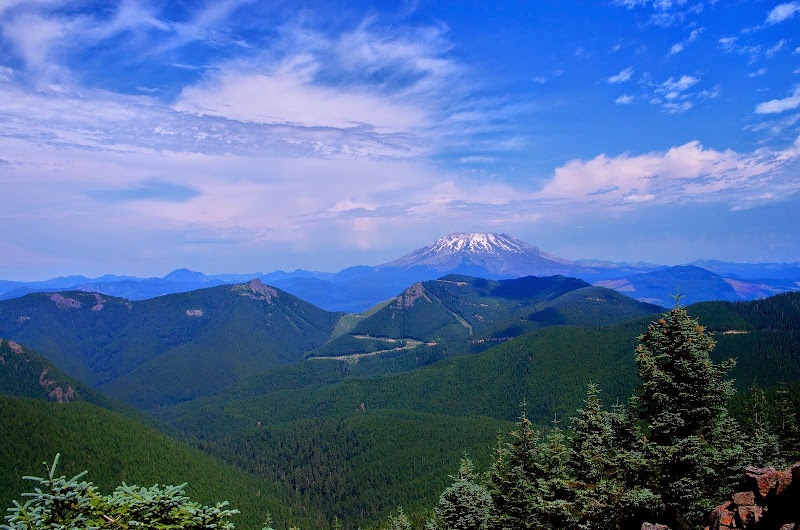 After a quick snack, I headed E on Tr 129 through a welcome canopy of shady trees, 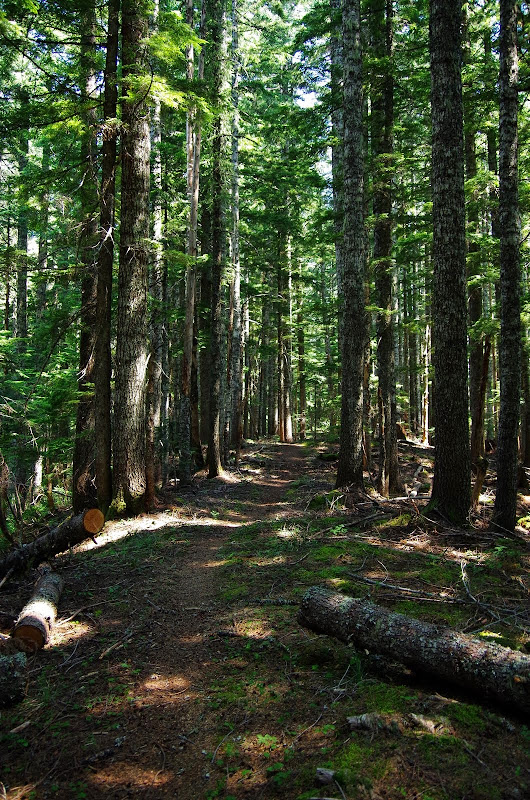 with an occasional spot of color. 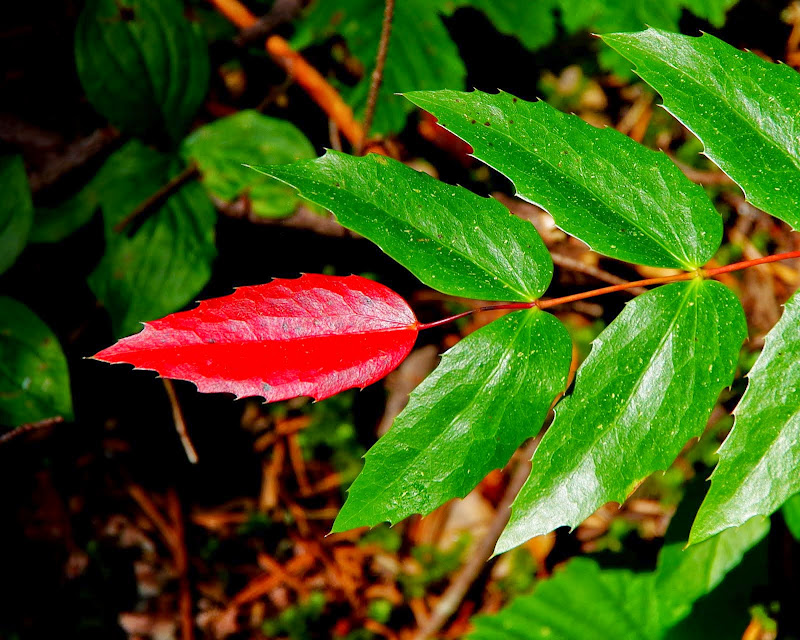 From Siouxon’s summit, I could see Adams in the distance and Swift Creek Reservoir in the foreground, 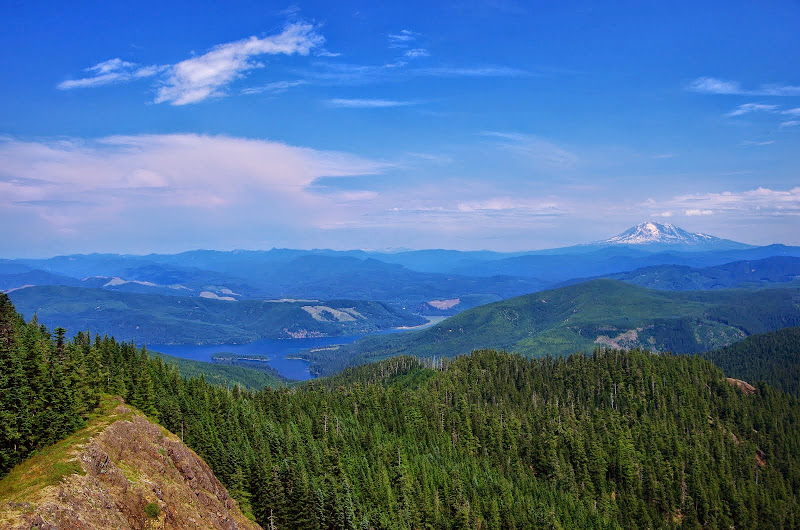 and back W to the summit of Huffman Pk. 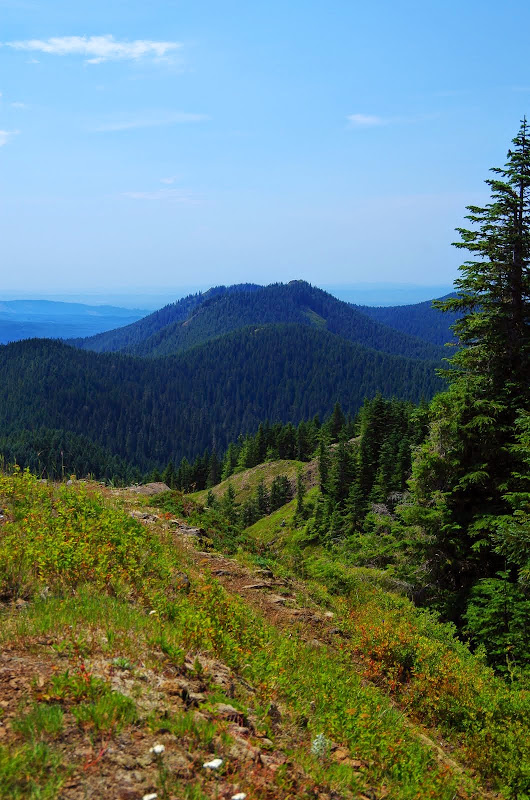 To make a full loop, I continued E on Tr 129, which becomes an abandoned road shortly after leaving the summit. Although much of it is under the canopy, there are places where it emerges to give you big views of Adams and St. Helens. The boomers were building rapidly over Adams and I was wondering if there was anyone still on the summit. 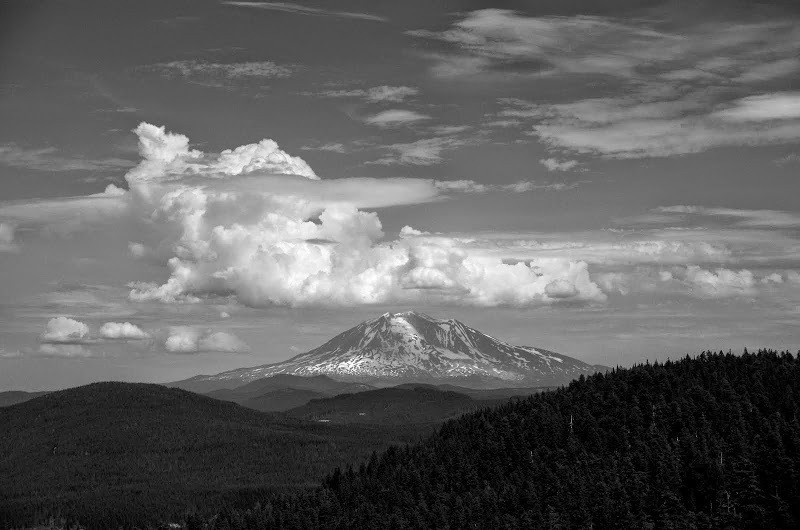 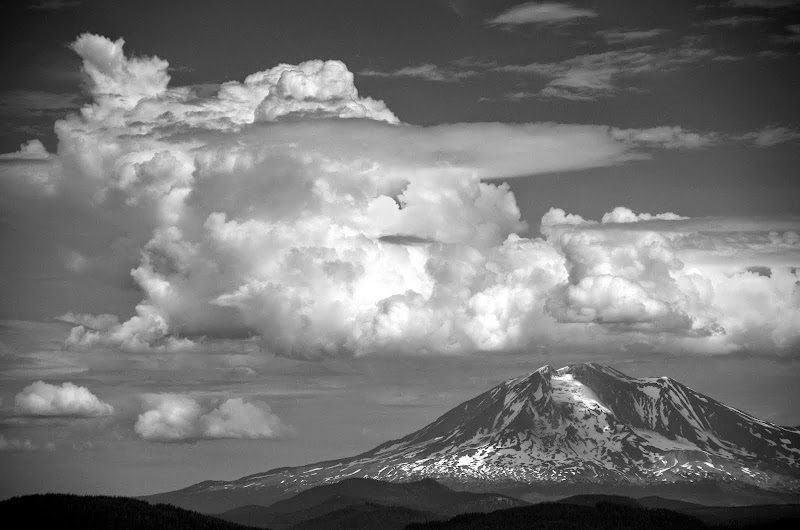 A boomer was budding over St. Helens, but hadn’t quite made it to prime time yet. 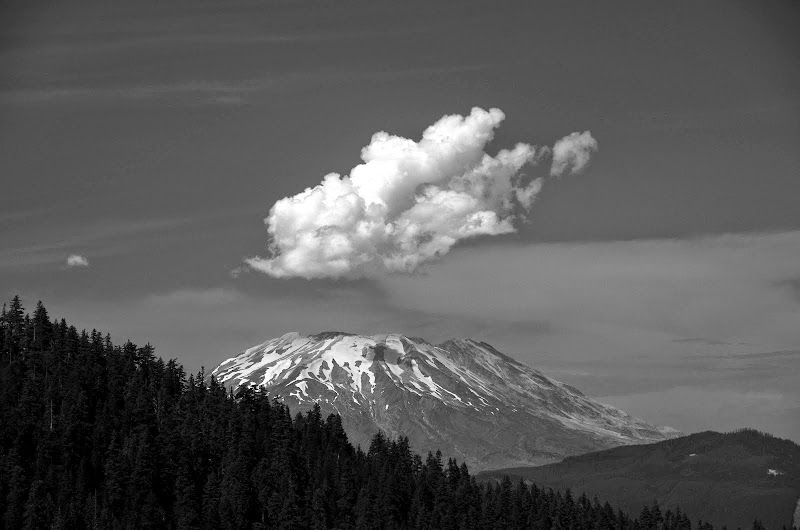 Tr 129 ends at a real road (FR 6403) and the junction of the Chinook Falls trail (Tr 130A). There’s no sign for Tr 130A but it’s the only trail heading S from the dip in the road. It starts as a really abandoned road that gradually morphs into a trail under the canopy – a welcome feature on what had become a hot afternoon. 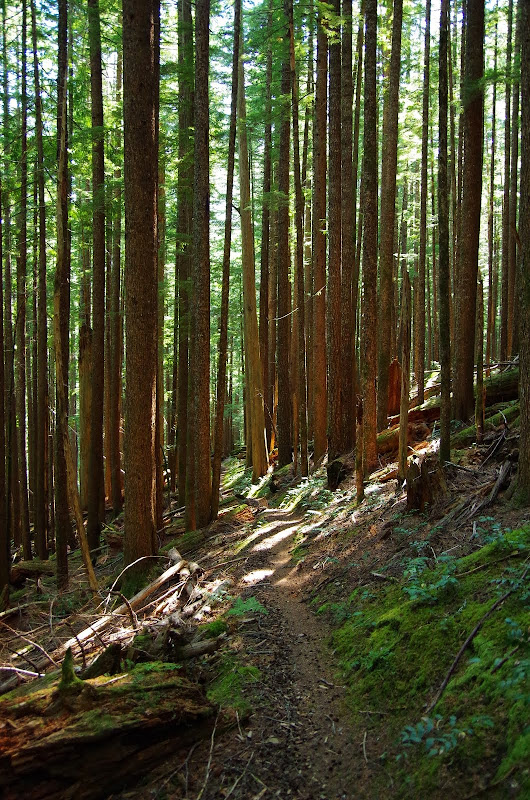 I’d used up 4 liters of water by the time I reached the cool refreshment of Chinook Falls, which I raided for 2 more liters. 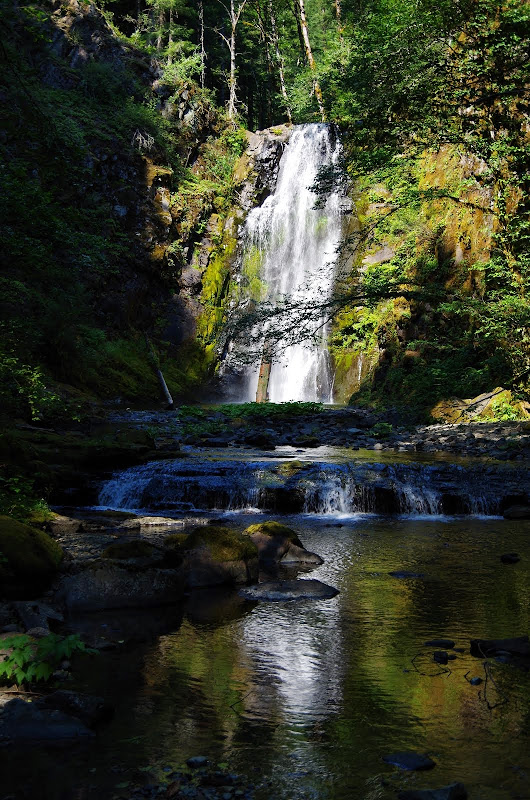 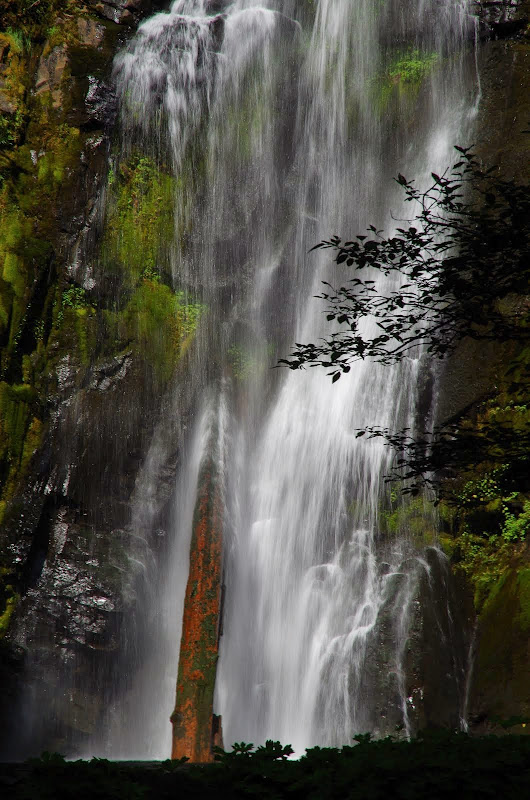 After using a log to cross Chinook Creek, and then the “bridge that may someday collapse” to cross upper Siouxon Ck, I connected with the Siouxon Ck trail (Tr 130) for the gentle hike back to the TH, through throngs of in-bound weekend backpackers. Mine had been the second car when I arrived; the lot was full when I got back. A great – but long (18 mi RT, 4,800’ EG) - hike with summits, views, easy trails, waterfalls, and creeks.

Maybe a little easier on a cooler day.

Awesome! I had wondered if that route could be done in a giant day hike. Now, I know

. Such a great area. We must explore it again, and soon. Thanks for the TR.
'We travel not to escape life but for life to not escape us.'
-Unknown
Top

sprengers4jc wrote:Awesome! I had wondered if that route could be done in a giant day hike. Now, I know

. Such a great area. We must explore it again, and soon. Thanks for the TR.

Thanks! It's a long one but it's all trail and the trails are in good shape and easy to follow. There seems to have been a lot of work done to clear Tr 129 E of Siouxon of downed trees and that helps a lot. Just take a lot of water because there's almost none (some trickles) available along the 129 & 130A trails between the creek and the falls. And don't miss the views like I did the first time - go on a clear day!