This loop in the Bull of the Woods Wilderness has been on my to do list for awhile but Pablo's recent TR (Mother Lode Mtn) of his explorations in this area galvanized me into action. The drive to the northern Elk Lake Ck TH was just as described in the Field Guide, the only caveat being that there's currently logging happening near the start of FR 63, so watch out for large, heavily laden trucks. With the air temperature already starting to climb, the cool, shaded tread of the Elk Lk Ck (#559) trail was much appreciated, 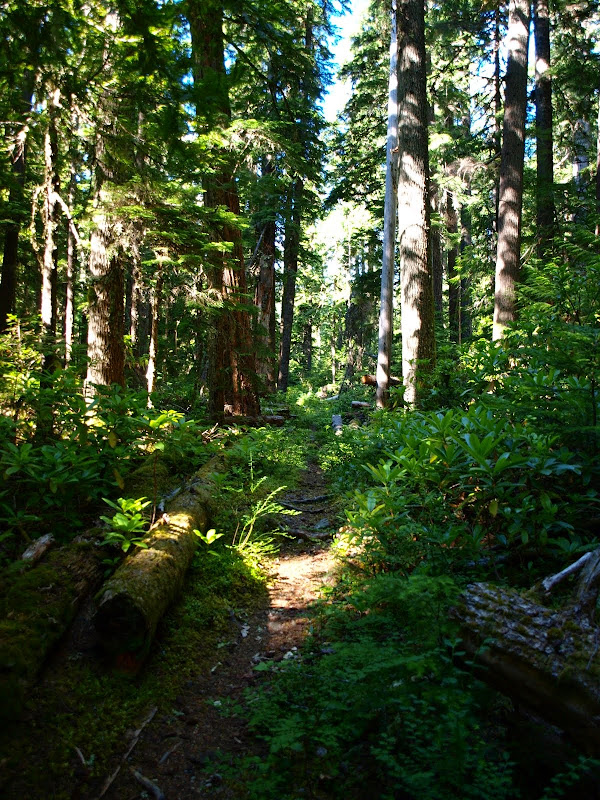 as were the opportunities for a cool drink (this turned out to be a full gallon of water hike). 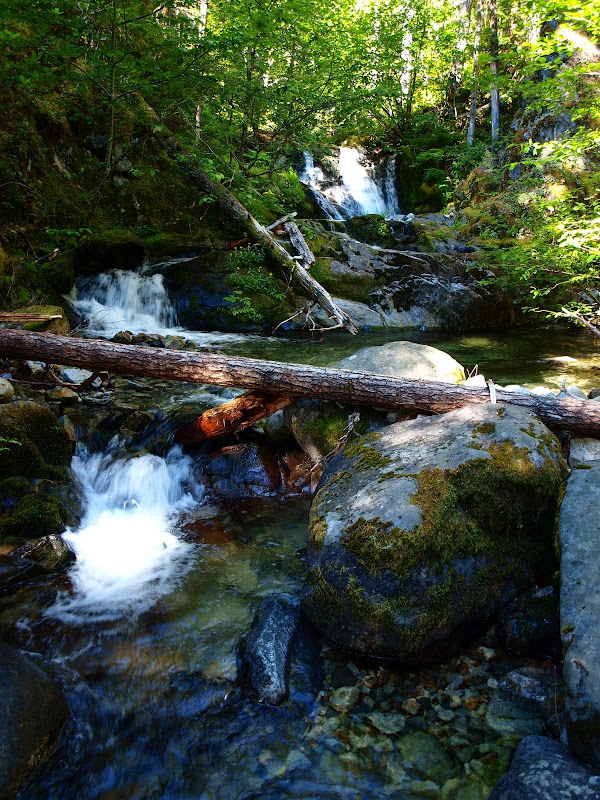 The 559 crosses Elk Lk Ck three times enroute to the site of the now gone Battle Creek Shelter. The first two were managed by thigh-deep wading, 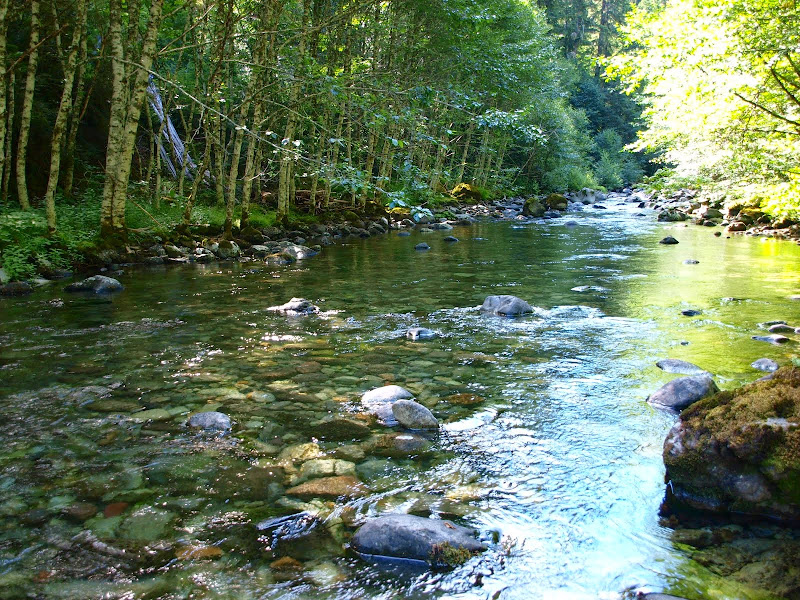 but there was a handy, if somewhat acrobatic, log to take me across the third one (there has been trail damage in this area, so it's possible to miss the log and end up doing a 3rd wade anyway). Elk Lk Ck has some amazing deep, clear, and cold pools and the temptation to abandon the hike in favor of splashing in them was strong - but resisted. 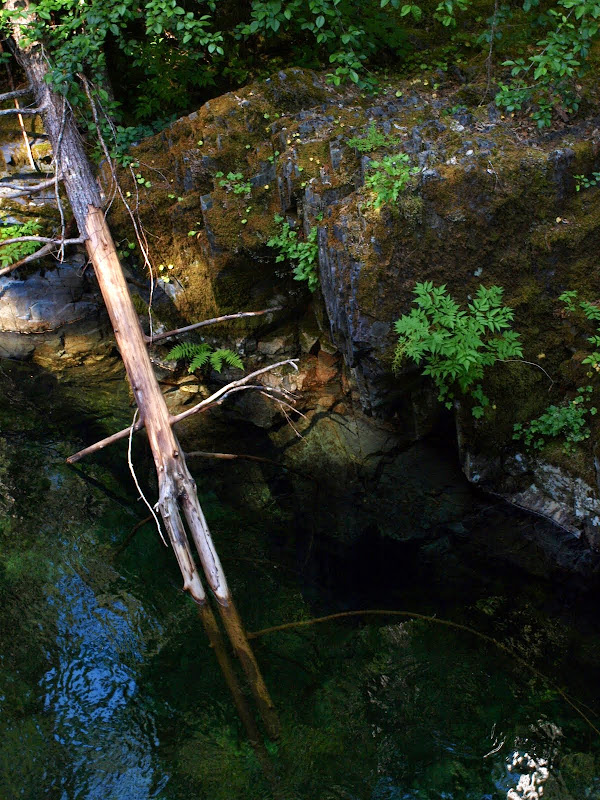 Sometimes the reflects would take on a Monet water lilies quality. 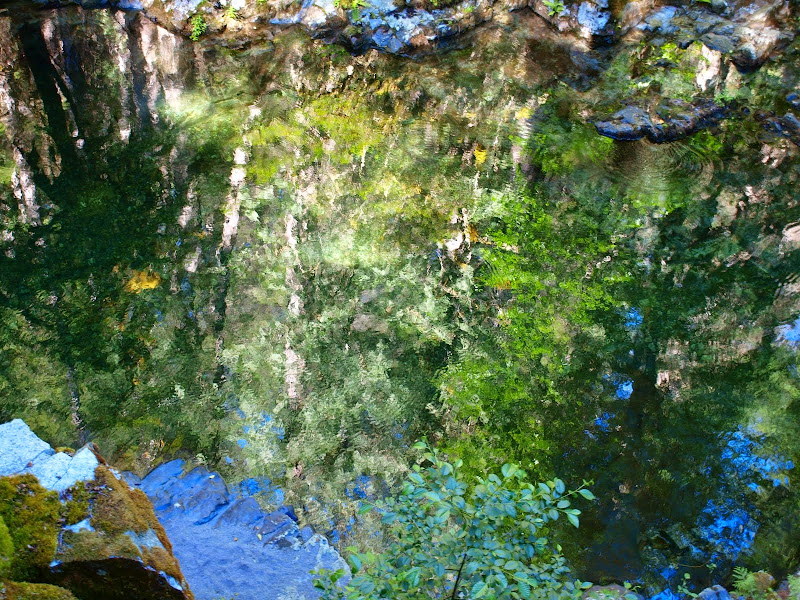 Approaching the shelter area, the 559 felt almost like a walk in the park. 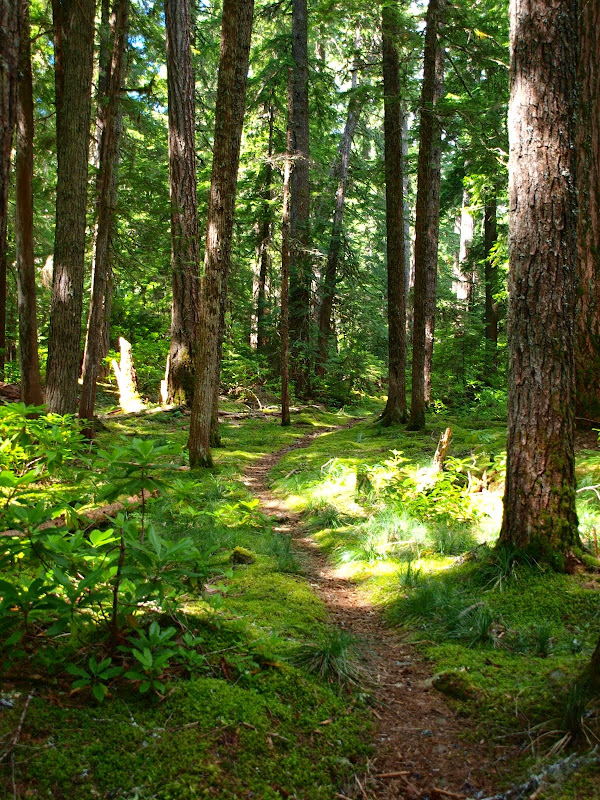 At the Battle Creek shelter site, the 559 junctions with the Mother Lode (#558) trail, whose signage seems to have suffered. 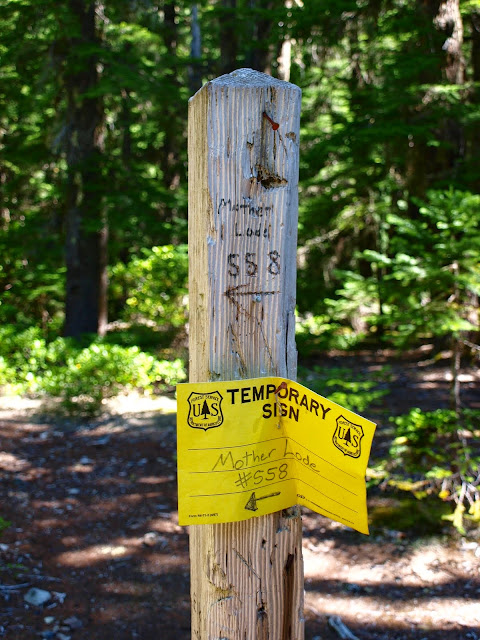 The 558 crosses Battle Creek - another, slightly deeper wade - and then starts climbing gradually up the canyon to a junction (arrow) with the Pansy Lk (#551) trail. 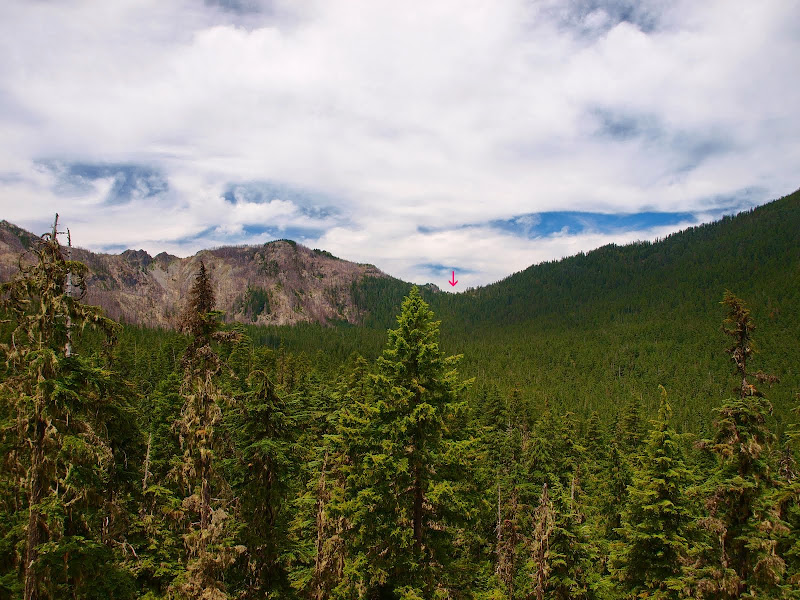 This rare open viewpoint was where I encountered my first person of the day - a backpacker who'd come up from Elk Lk - causing both of us a bit of a surprise since both of us thought we were "alone" in the wilderness. A little further along the 558, I caught a glimpse of the Bull of the Woods look out (arrow) - my high point for the day. [black spec is hopeful buzzard] 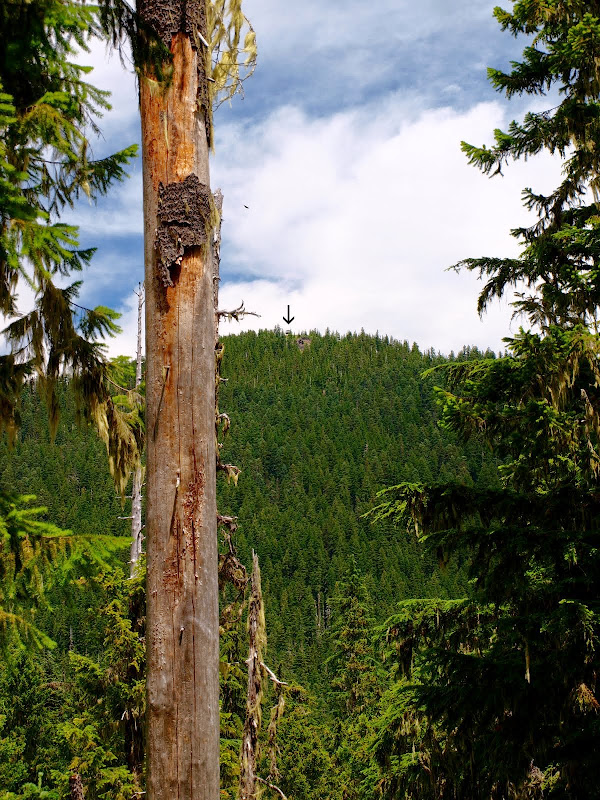 From higher on the 558, I could look back down the Mother Lode Ck canyon toward Jefferson and Olallie Butte in the distance. 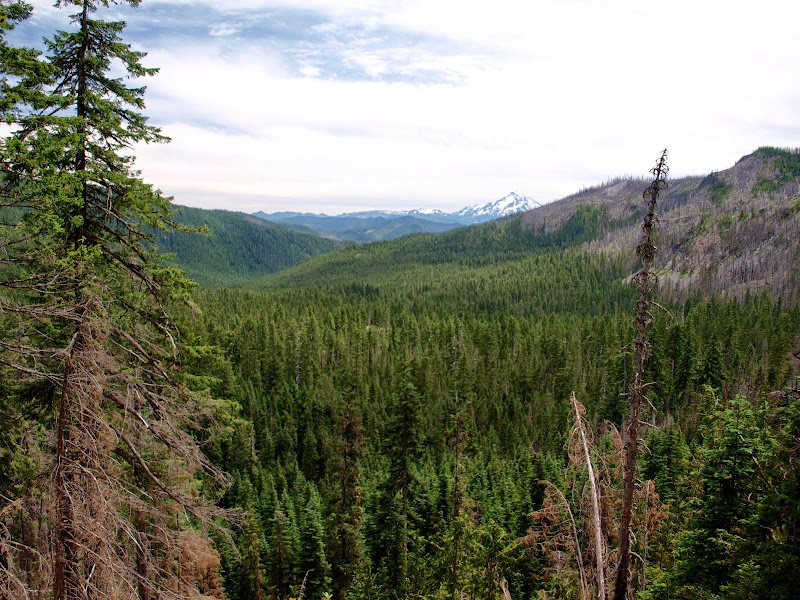 After some more gradual ascending and switch-backing, the look out finally hove into view - surprisingly surrounded by a small field of fresh flowers! I would have thought they'd all be wilted by now. 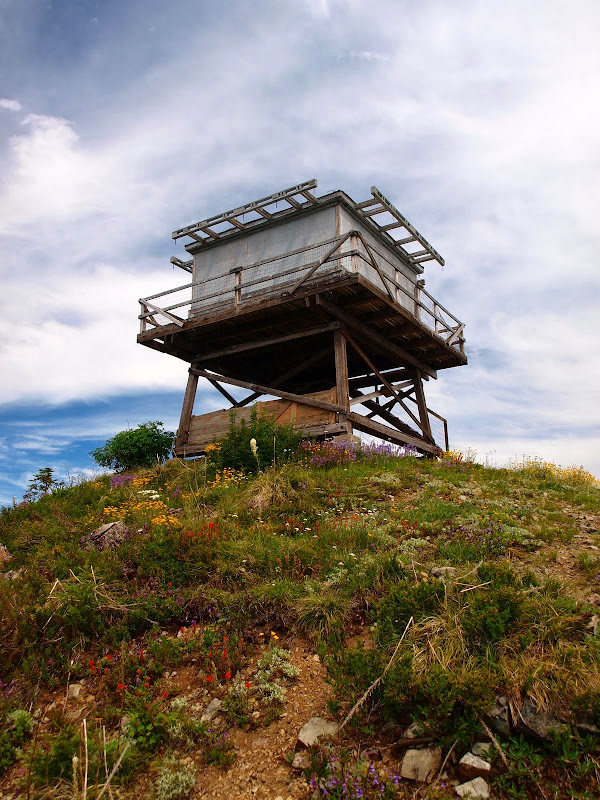 There was a high overcast building, but I could still see Jefferson to the E past a another field of flowers, 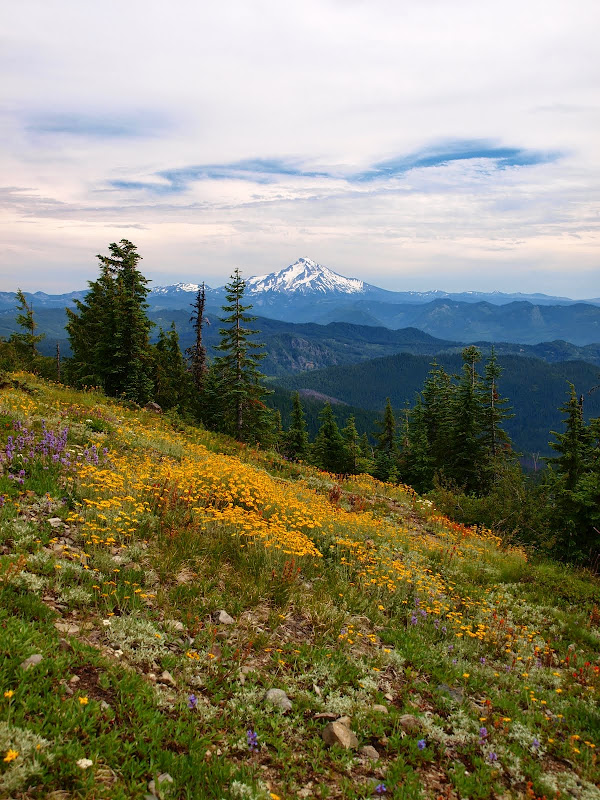 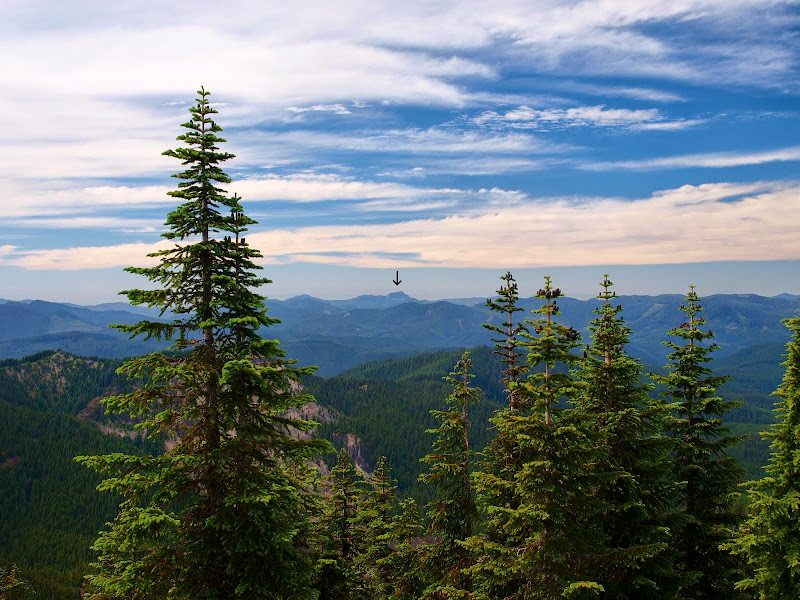 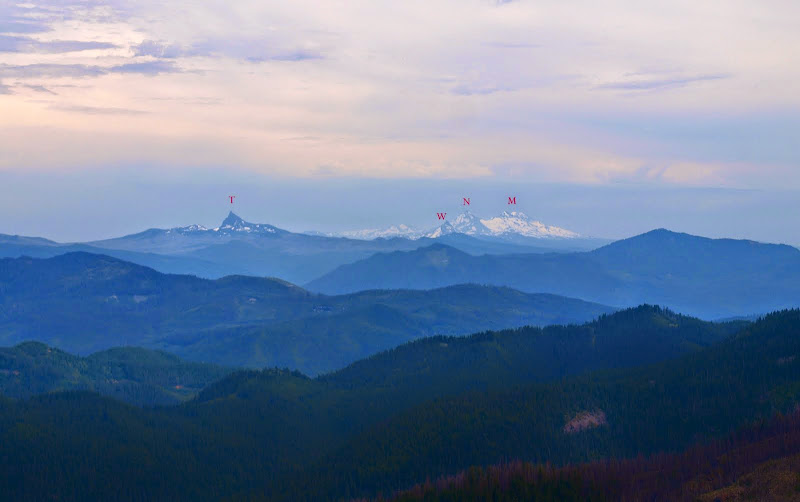 After a quick lunch, I dropped down via the Schreiner Pk trail (#555) to the West Lake Way trail (#556) and took that to its junction with the Welcome Lks trail (#554). I had expected to be tormented by mosquitos all day but it was not until I got near the puddle of a lake at the junction of the 555 and 556 trails that I got swarmed. That lasted for only a few minutes and then it was back to largely bug-free hiking (if I stayed away from lakes). Because of the fire that swept through this area in 2010, the 556 is in pretty poor shape as it approaches upper Welcome Lk, which is still (and will be for generations to come) surrounded by the burned remnants of a once lush forest. 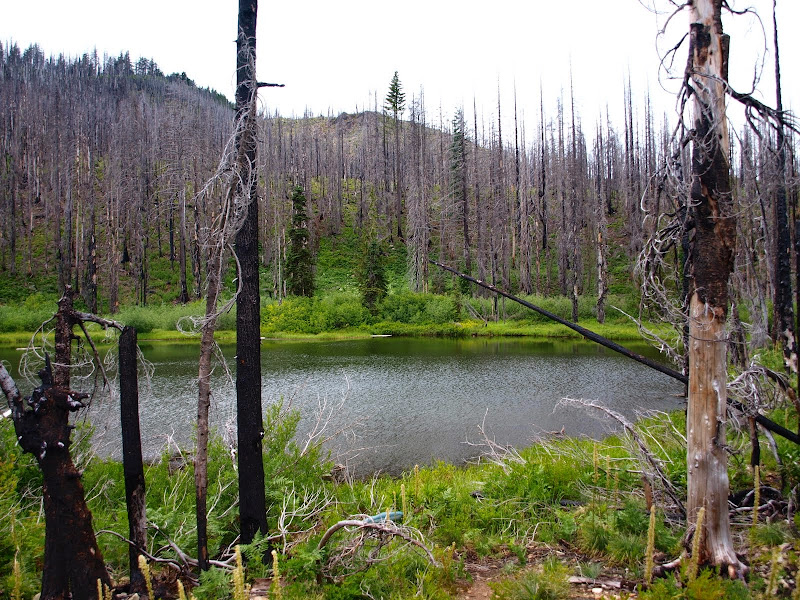 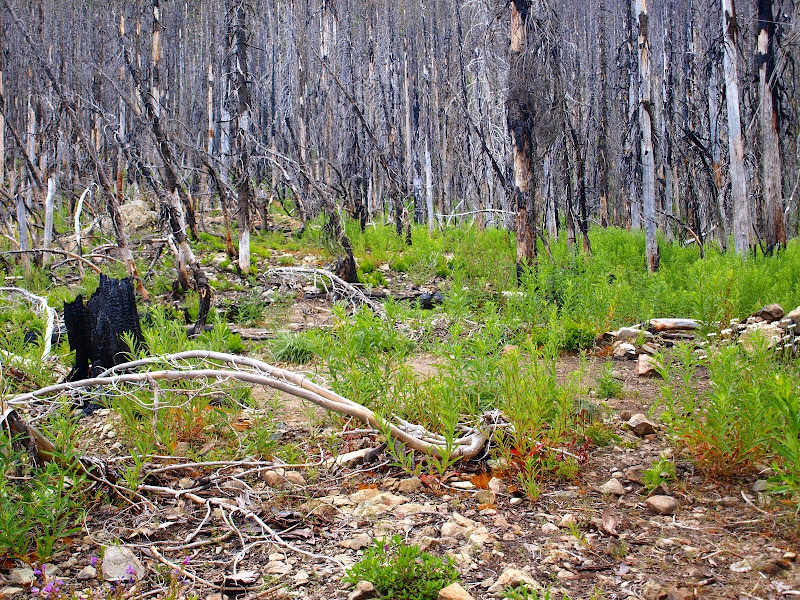 Because of the fire damage, the junction with the Welcome Lks (#554) trail is not what it once was either, nor is the 554 itself very easy to follow until it drops to about the 4,000' level. 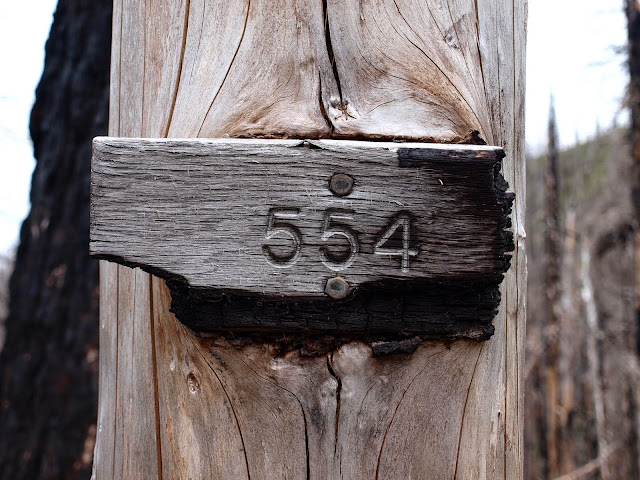 I took a detour to see lower Welcome Lk but turned back to the trail after encountering another cloud of biting insects. Up to this point, I'd seen only one other person on the trail. Suddenly, I came across three day hikers plus dog, one backpacker plus dog, a dog-free solo backpacker, and a backpacking couple (also without dog). A burned-out, bug infested lake seemed (to me) a less than aesthetic destination, but to each his/her own. After working my way through these "crowds", the 554 was a pretty straight shot back to the 559 and hence to the TH. There was now a group camping along the creek about 0.75 mi in from the TH, which is fine except they felt the need for a campfire. An open fire seems like an INCREDIBLY STUPID idea given the lack of rain and the tinder dry conditions in the forest! Arrrrrgh!

A long (19 mi, 3,800' EG) but rewarding hike in an area parts of which I'd not visited before. Trails (except for parts of the 554) in good condition, few bugs (except near the lakes), mostly in shade, and culminating with big views from the look out. 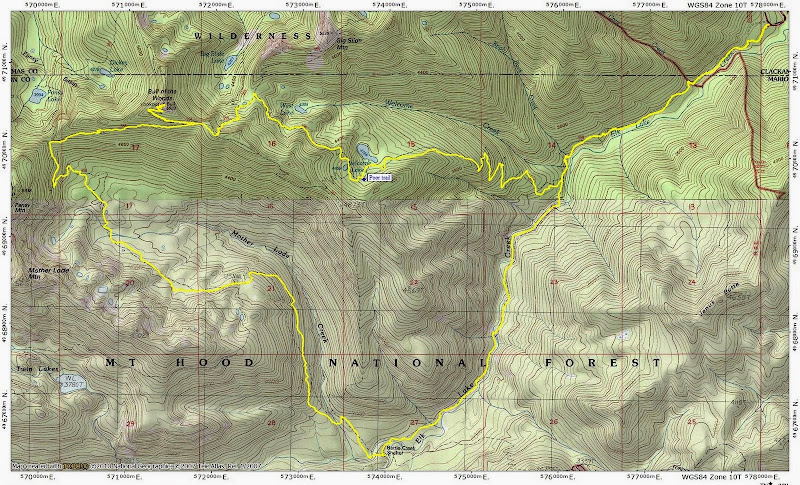 Great hike. Elk Lake Creek is a wonderful stream to hike along. I had wondered what the Schreiner and Welcome Lakes area trails were like after the burn. Being that you made it through, they must be walkable.
Clackamas River Waterfall Project - 95 Documented, 18 to go.
Top

BrianEdwards wrote:Great hike. Elk Lake Creek is a wonderful stream to hike along. I had wondered what the Schreiner and Welcome Lakes area trails were like after the burn. Being that you made it through, they must be walkable.

Elk Ck is so attractive that it can rob you of the desire to hike any further!

The 555 and 556 are good. But with the 554 you have to pay particular attention between the upper and lower lakes if you want to stay on it versus being diverted (by a bunch of cairns) to a track that drops directly down to the lower lake.
Top

We are thinking of backpacking in from this trailhead this weekend. Just to clarify on this thigh-deep wading thing, are you a pretty tall person, or a not so tall person?

Better check with the FS before you go. I tried to drive to this trailhead yesterday but found that Road 63 is closed about a mile past the junction with Road 6350 to Graham Pass. There is a sign at the lower Collawash bridge saying that the road is closed 10 miles ahead, but it's really just over 3 miles from there.
Top

Thank you for posting!!!

The road to the trailhead is closed due to a log out this week, and the ranger suggested we stay away from that area. Good save!
Top

Nice TR and loop - woods, lakes, creeks, mountaintop lookout, big views - got everything. Very nice photos, you are getting good at this. And thx for pointing out Mt Washington relative to Sisters, I was looking for it when I was out there and couldn't figure it out.

--Paul
The future's uncertain and the end is always near.
Top
Post Reply
8 posts • Page 1 of 1