Last October, I did a loop over Lookout Mtn and along part of Badger Creek starting at Fret Creek (Fret Ck Loop). Beginning at Fret Ck seemed to make the hike extra long, so I got the idea of making a loop starting at the High Prairie TH and including a first-time visit to Badger Lake. Yesterday was the necessary bluebird day to put this plan in to action. The road (curiously devoid of signs?) to the TH was snow-free and in good shape. However, the trail itself got more and more covered with old, firm snow as I approached the summit, 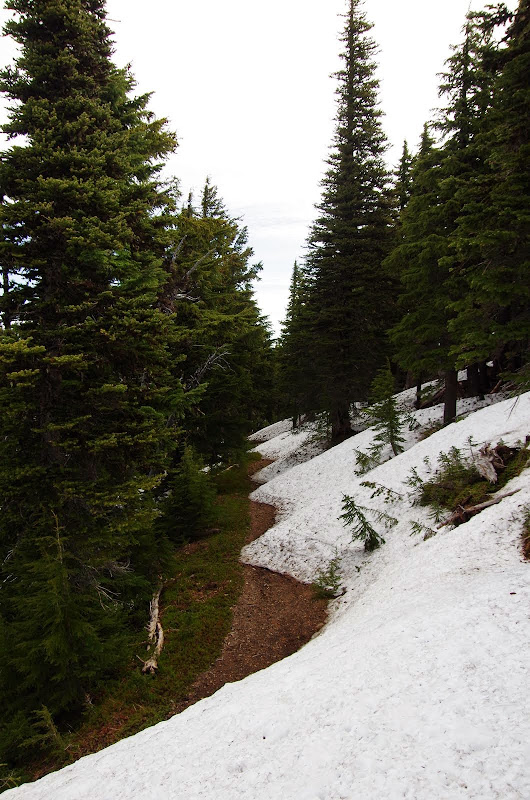 where I was met by the resident chipmunk - probably waiting for tourist season, with its bounty of snack foods, to finally arrive. 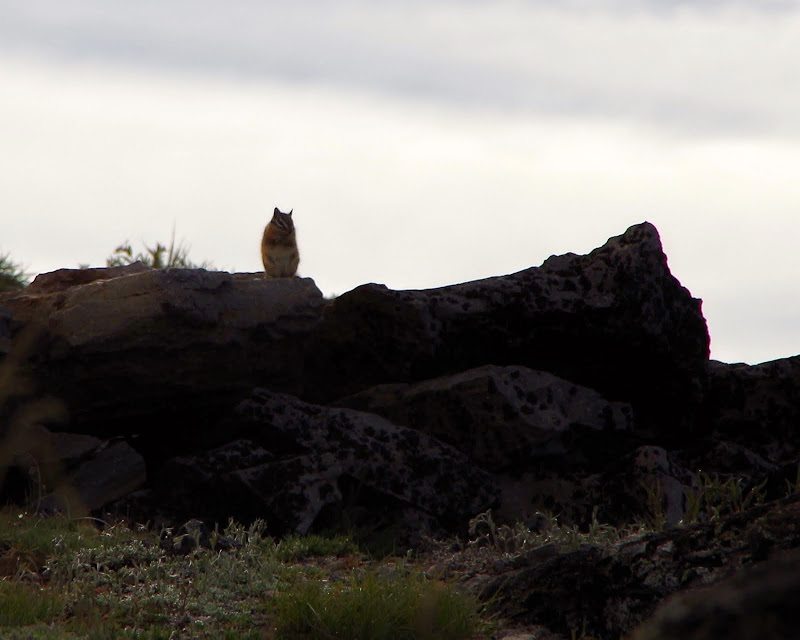 After working my way around this furry (and unsnacked) sentinel, I got to the summit for a view of Jefferson, Olallie Butte, Badger Lake, and the morning clouds trying to encroach from the W, 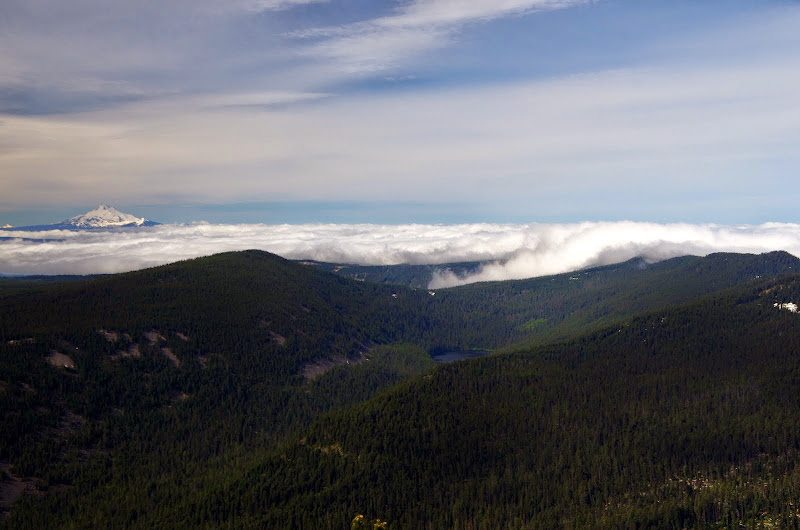 of the Sisters to the S, 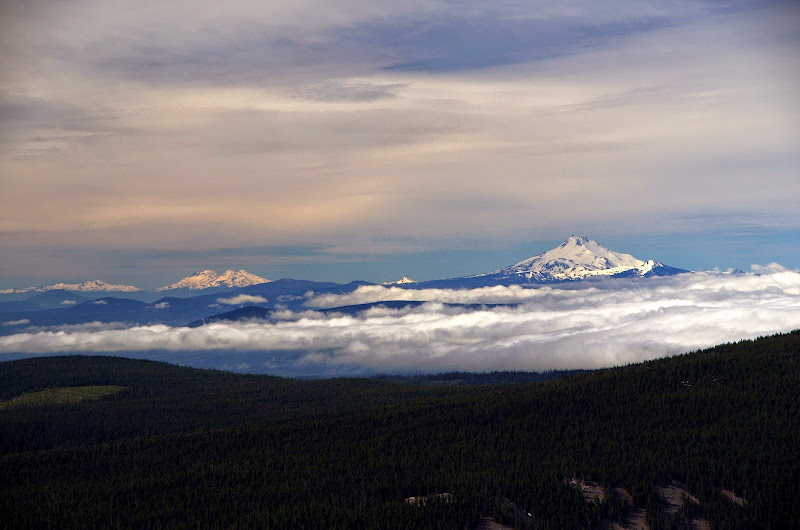 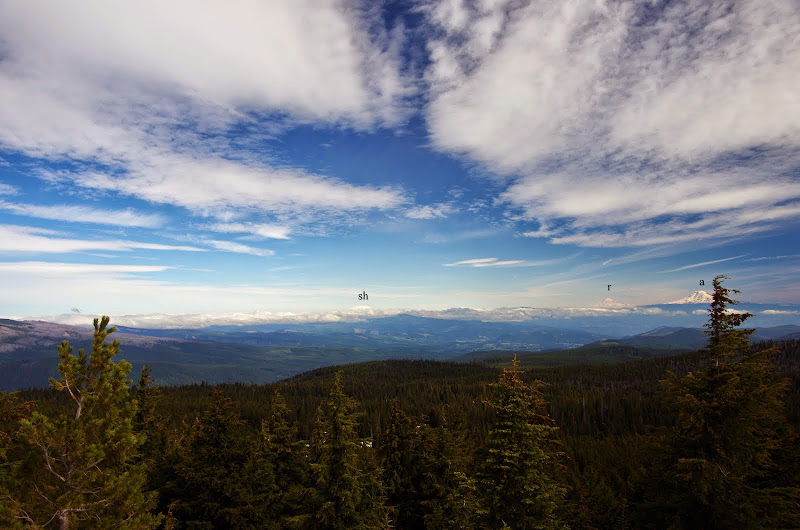 and Jefferson, Olallie, and Three Finger Jack floating on clouds. 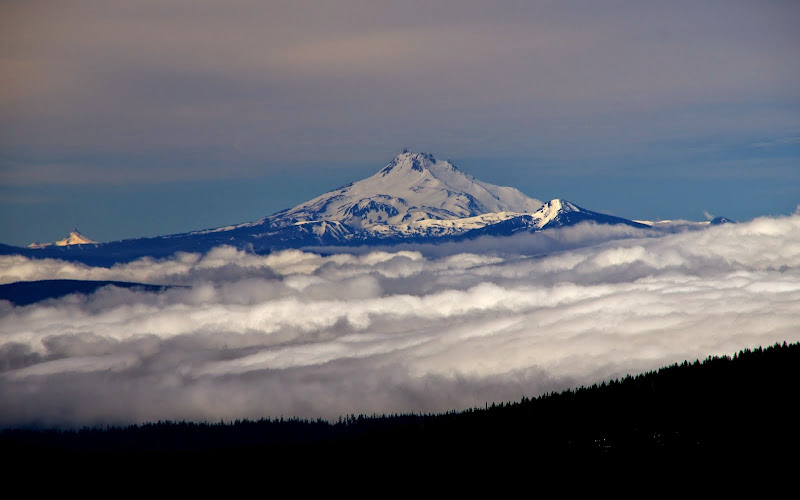 From the summit, I took the Divide Trail (#458) SE toward Flag Point (arrow), 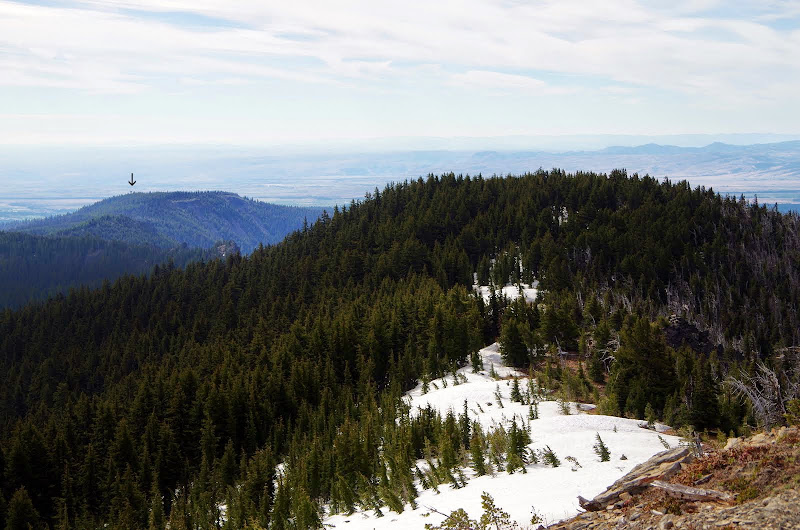 but used the Badger Cutoff Trail (#477) to drop down to Badger Creek and the Badger Creek Trail (#479). There was some blow down on all these trails - none showstoppers - but a little clearing would help (everything was too big for my little handsaw). Heading up the 479 toward the lake, I saw movement on the trail and quickly realized it was small toad time in the forest. Until I got well up on the Divide Trail, I had to be careful not to step on these little guys as they wobbled their way across the trail. 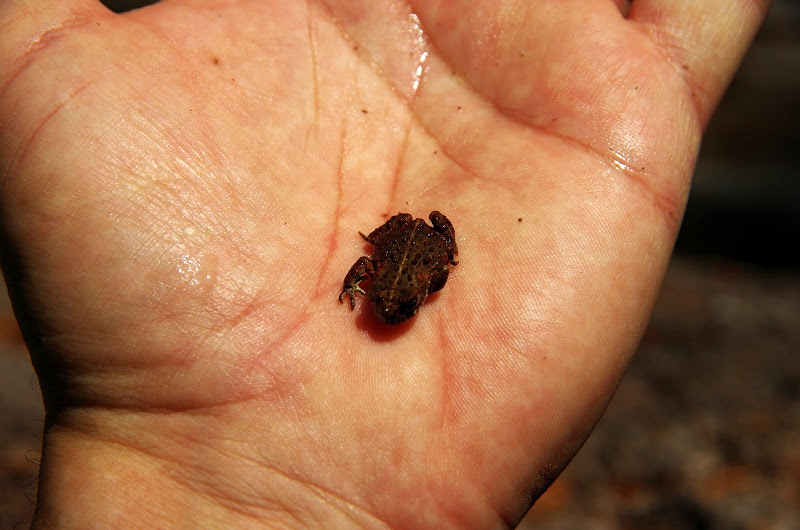 Badger Lake, although not natural, looks just like what you'd want a mountain lake to look like - blue, cool, and inviting. 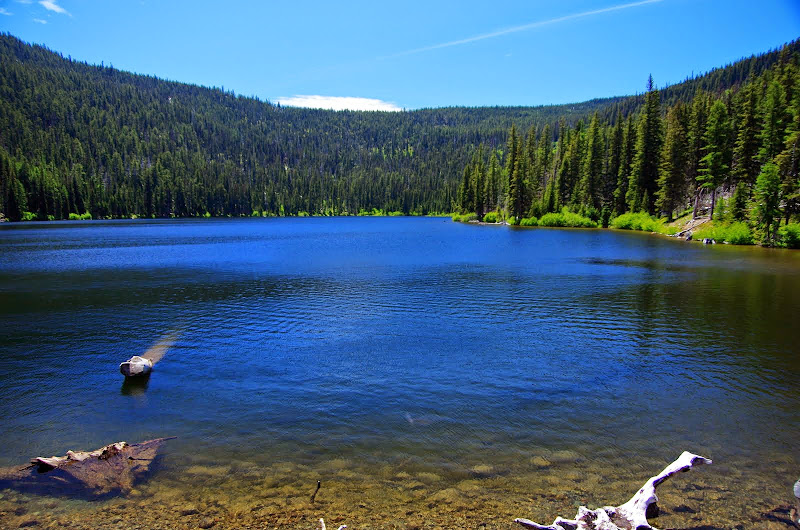 From the lake, the Divide Trail climbs pretty gradually past Gunsight Butte to Gumjuwac Saddle and the famous Barlow Road sign. 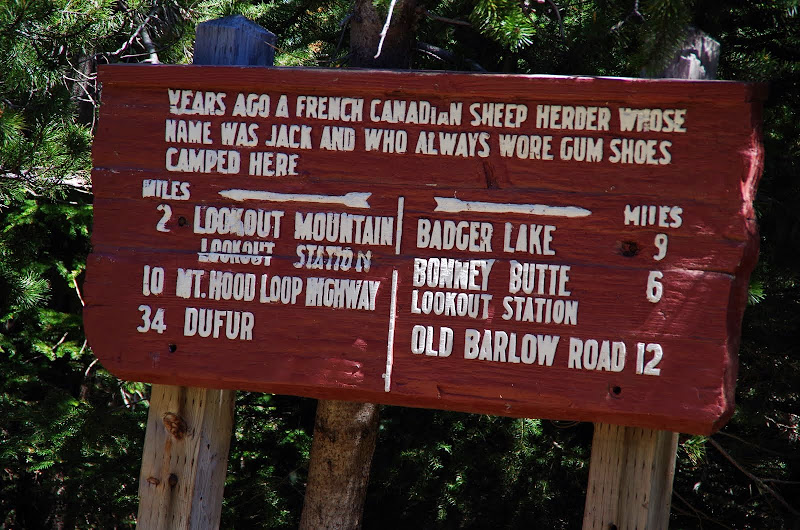 To make a true loop of this hike, I opted to take the Bennett Road back to the TH. It's a somewhat tedious road but the saving grace is the view it gives you of Hood, 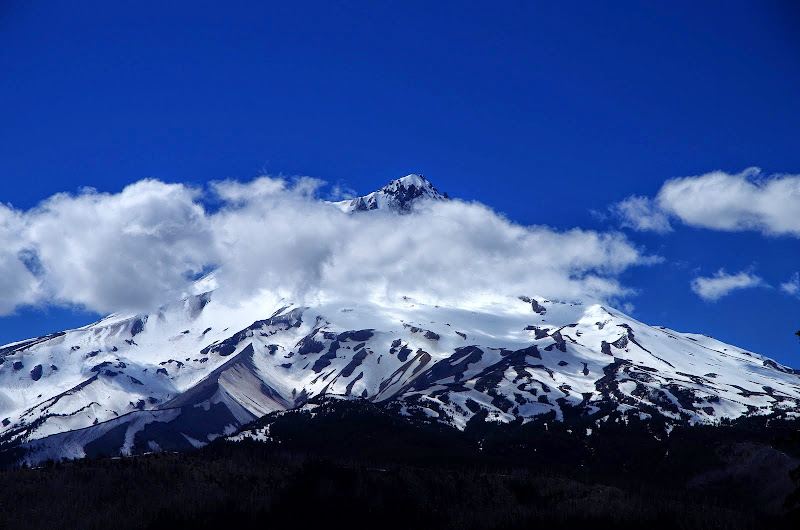 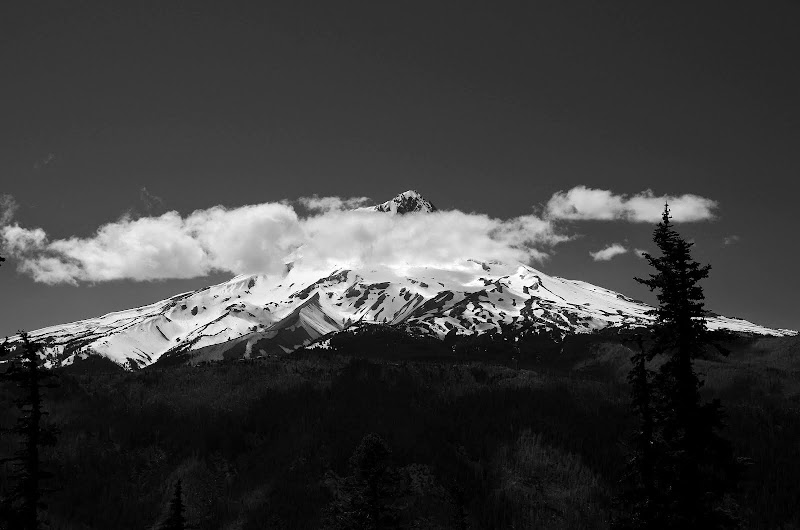 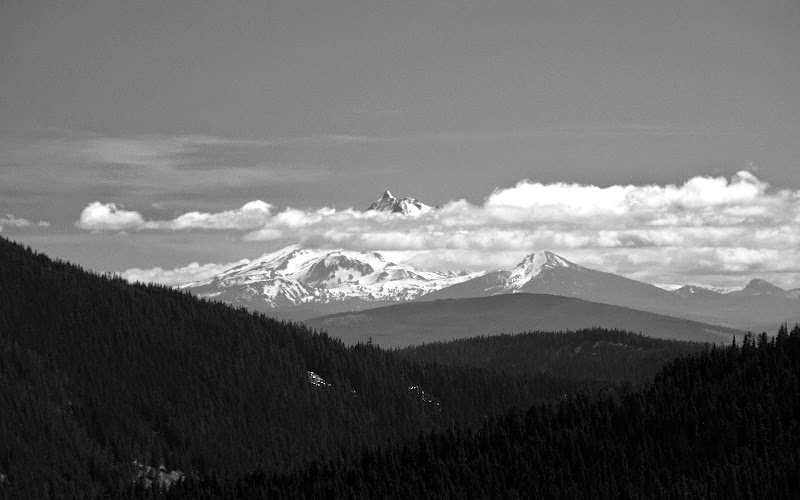 And thus, back to the TH. I'm pretty sure this is not what the High Prairie TH looks like on a warm, snow-free weekend day! No other hikers and only one other car (at the lake) all day. No need to exercise my poor social skills! 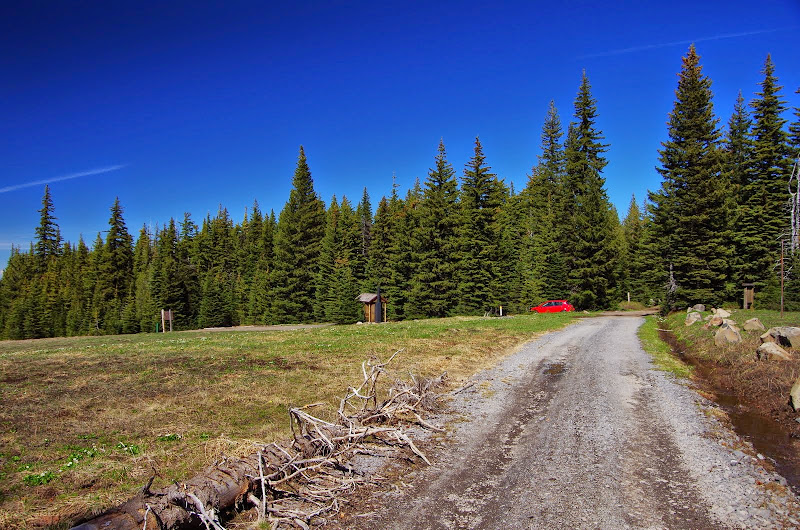 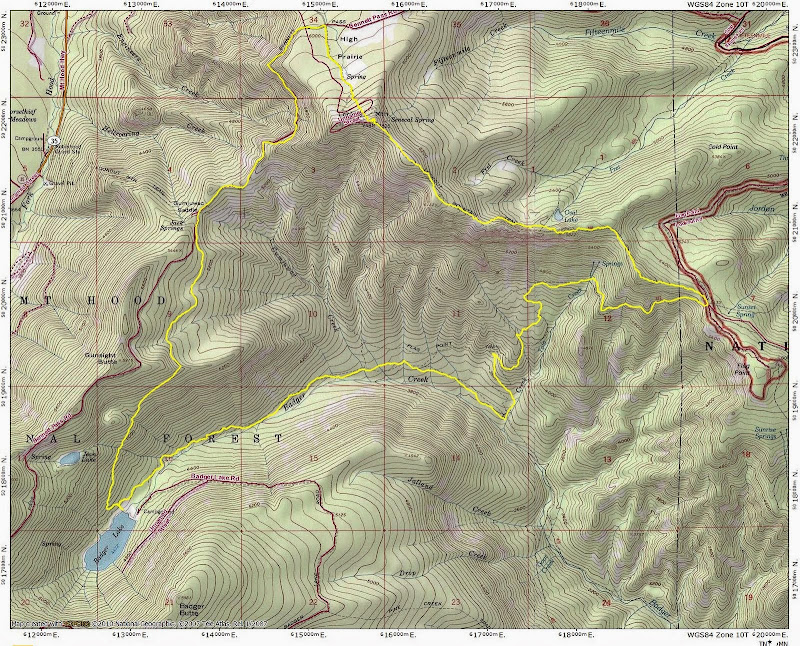 Nice report, Van - you are an early bird getting up there so soon! I used to work summers in that area, and because of its height, Lookout would often keep a few snowdrifts into early August. Love that mountain!


Badger Lake, although not natural, looks just like what you'd want a mountain lake to look like - blue, cool, and inviting.

Agreed on its beauty, but I think it's like others (Trillium, Rainy and North lakes come to mind) in being a natural lake that was "improved" with a low dam over the outlet... but not sure. I think I've seen it on very old maps that predate the irrigation system.

I've been mourning the sudden die-off of whitebark pines around the summit of LO -- especially on the old road grade between the saddle summit. There are some REALLY old sentinels on the SE slope of the summit that are thus far unaffected, thankfully.