Matt took me for a tour of the forest service backroads on the east side of Hood today as we got in three casual walks and one brutal straight uphill hike. Tygh Creek Trail (which follows Tygh Creek only very briefly) shoots up the hillside with no switchbacks for 1700' in 2 miles. And down ain't a whole lot easier beating up the knees instead of the lungs..

And it was pretty humid too until the breeze came up and some of the clouds departed. Right around the time we got to the top. D'Oh!

Starting with the top tier of White River Falls.. 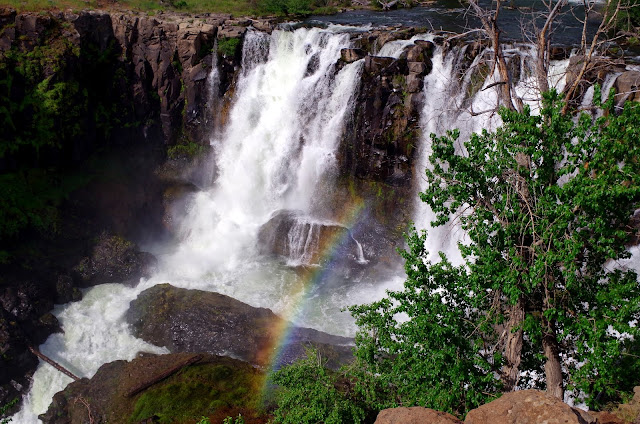 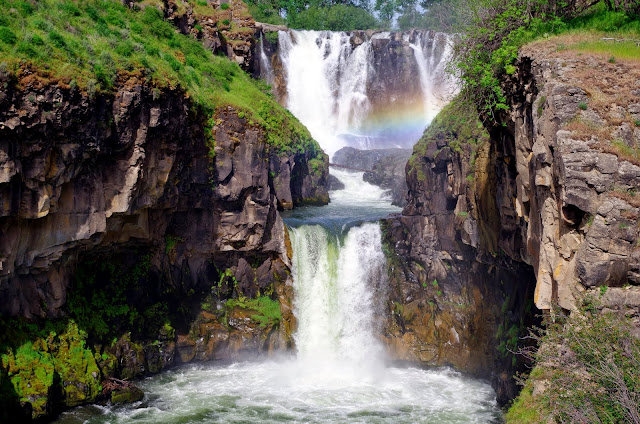 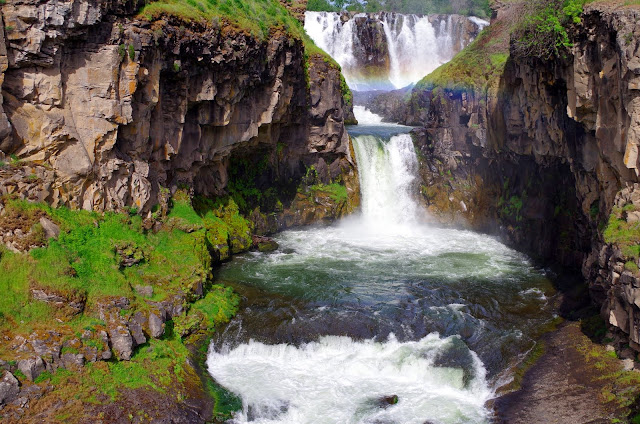 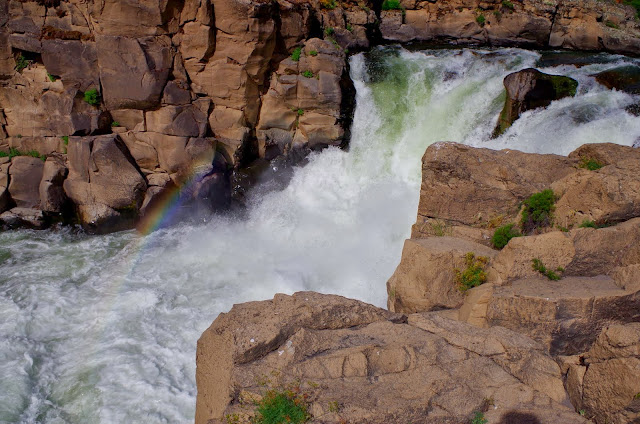 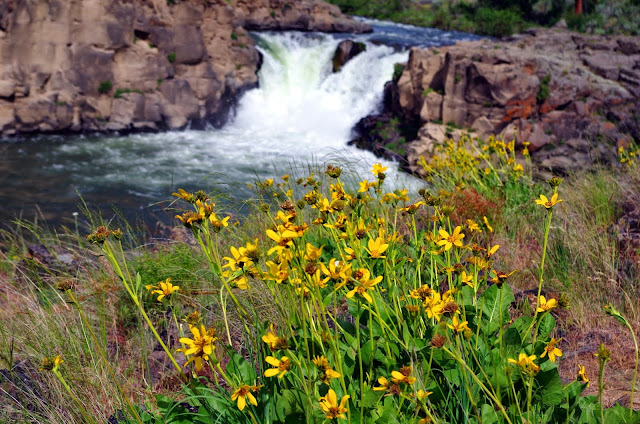 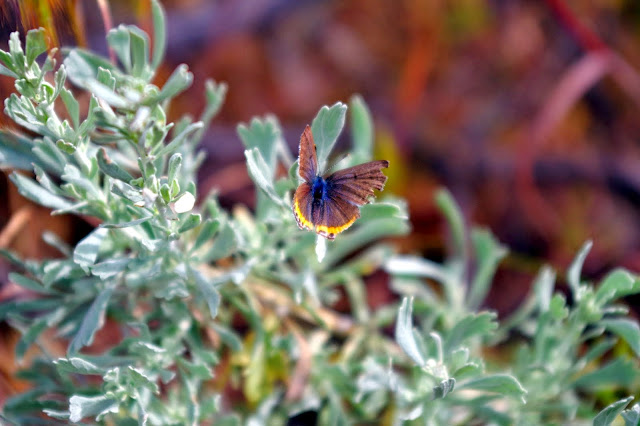 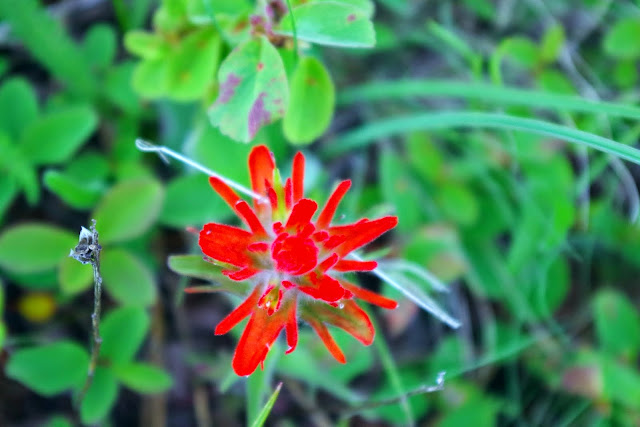 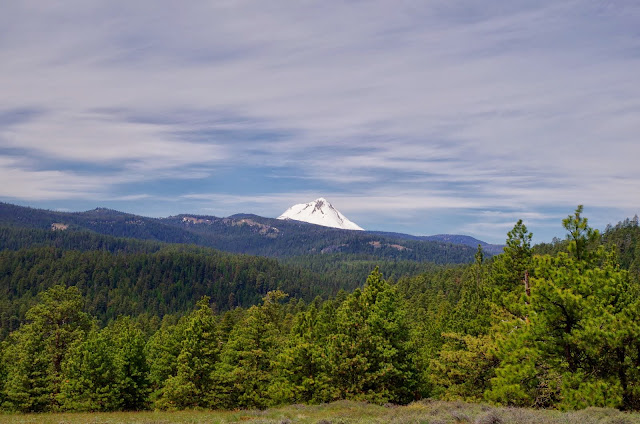 And a different butterfly in the Tygh Creek Trail meadow... 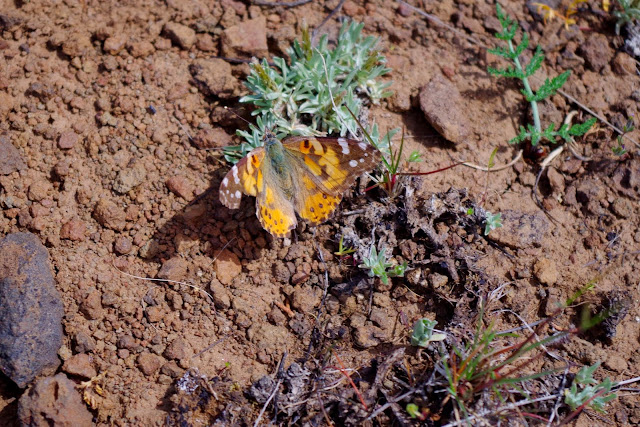 Todays turnaround point up in the meadow at the junction with the Jordan Butte Trail.. 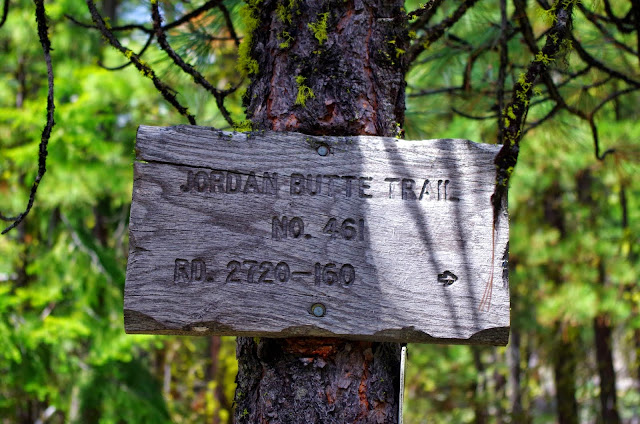 Tygh Creek trailhead back down to the road or you could go further up to Flag Point.. 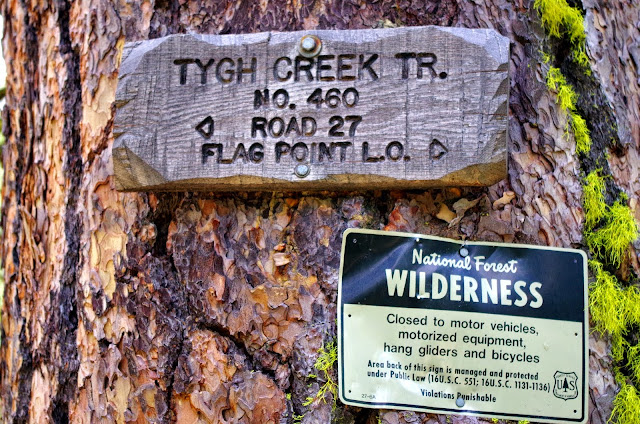 Mt Jefferson with North Sister tucked in the clouds in the left corner as we headed back down.. 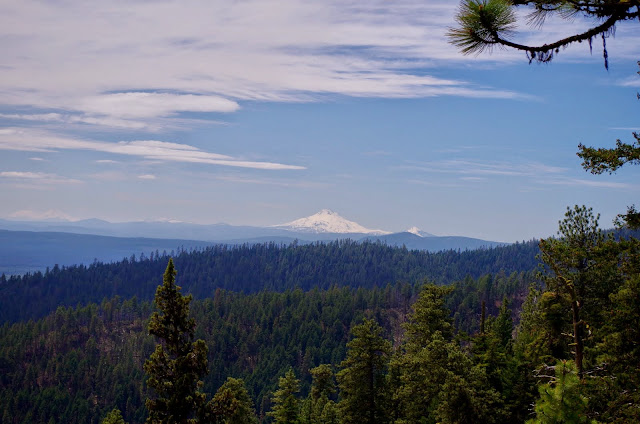 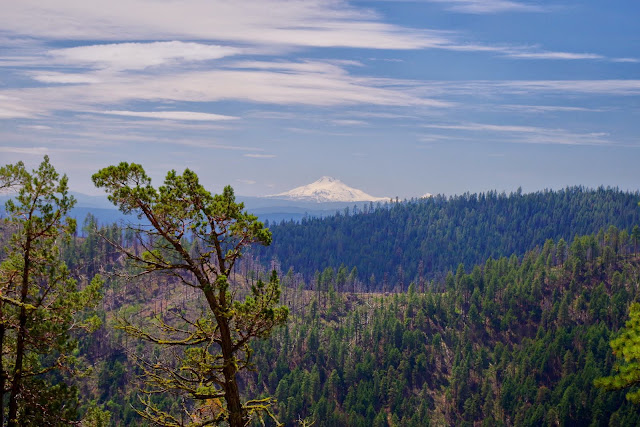 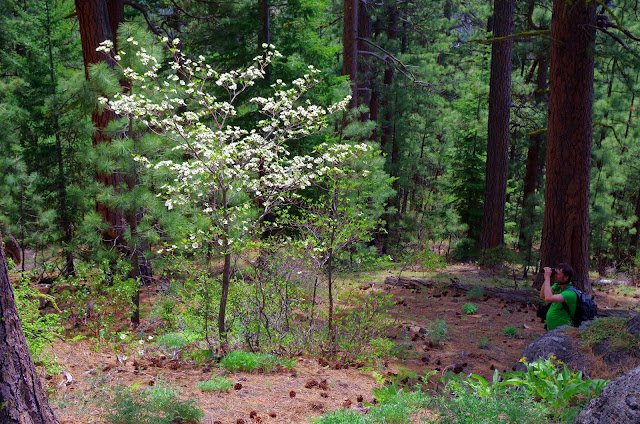 Looking up the dogwood tree to the blue sky above.. 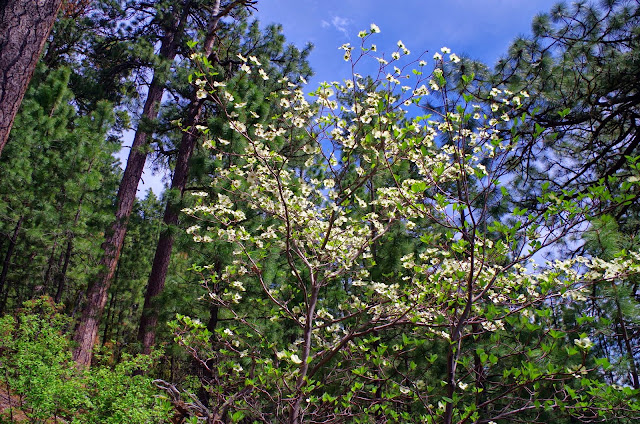 Not as much lupine as we had hoped for but still some nice displays scattered around as we came back down.. 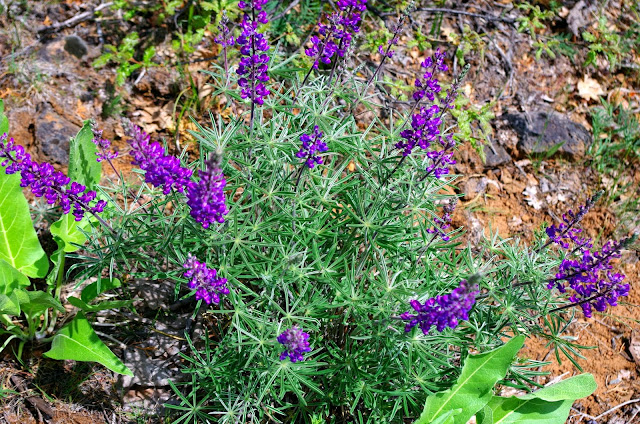 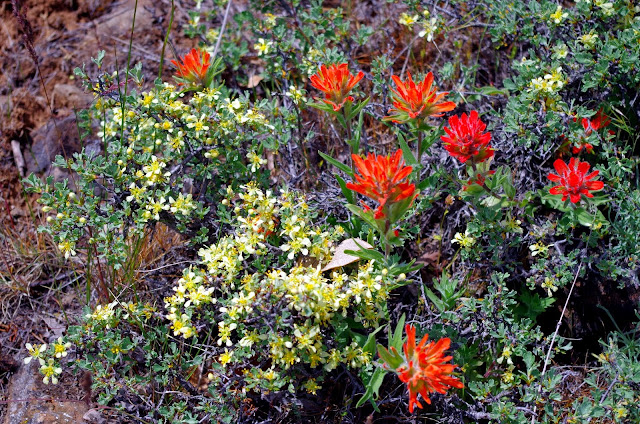 Looking back up the steep Tygh Creek Trail as we came on down.. 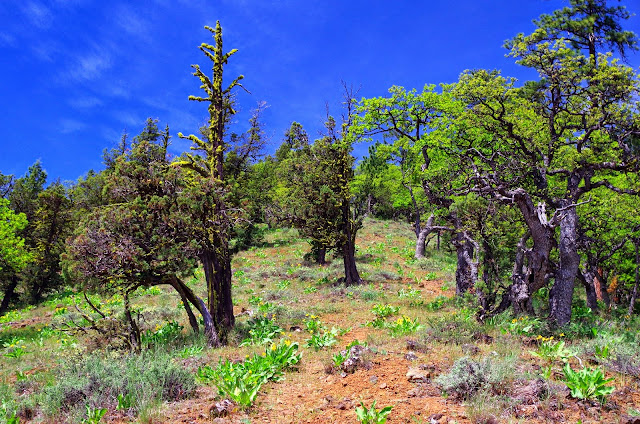 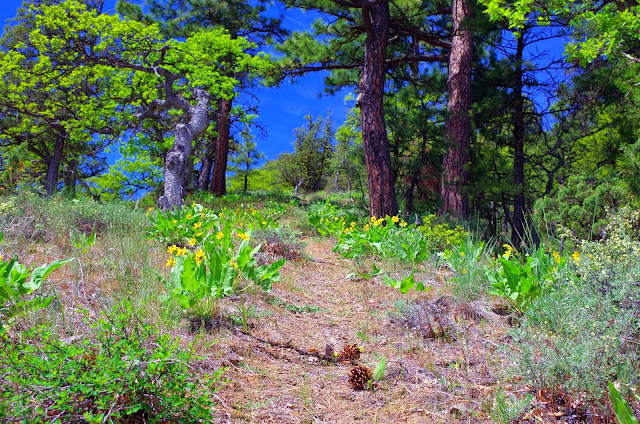 The meadow at the trailhead for Little Crater Lake... 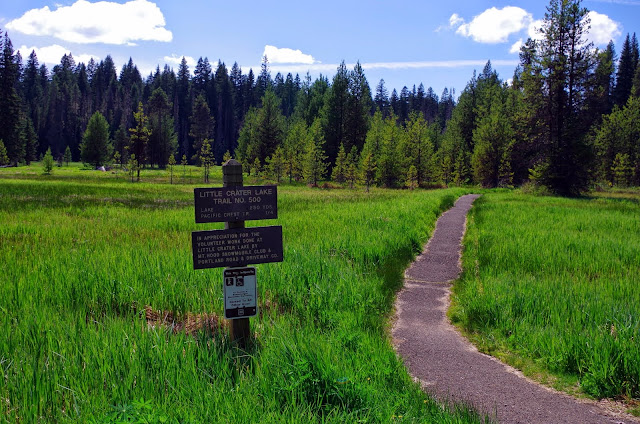 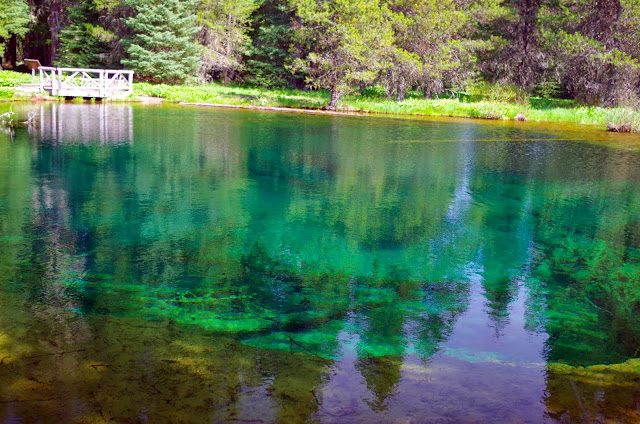 But not today, just some ripples from the breeze constantly changing the look from one moment to the next.. 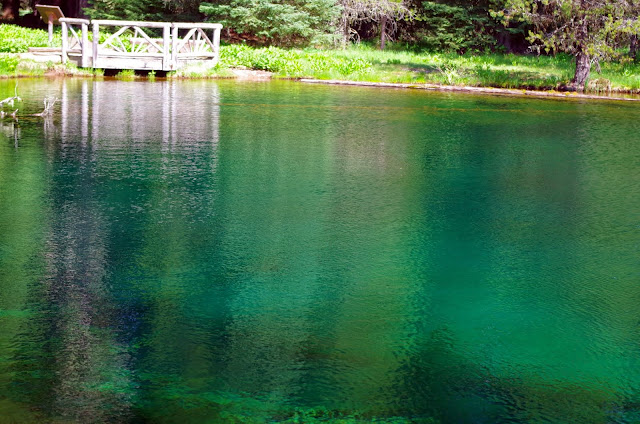 Shooting start blooming near Little Crater Lake (there is a bunch in the meadow too but it's super soggy).. 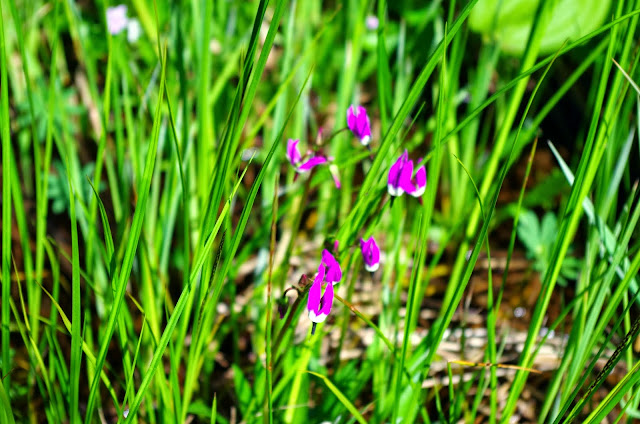 That would be me 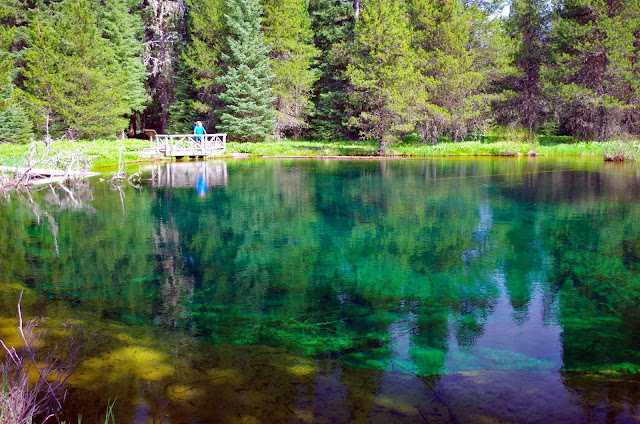 One last look at the colors of Little Crater Lake.. 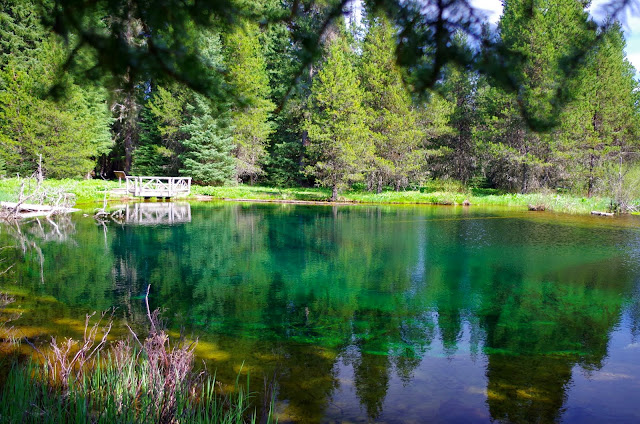 First dragonfly I've been able to get a shot of this season as he rested on the false hellebore leaves.. 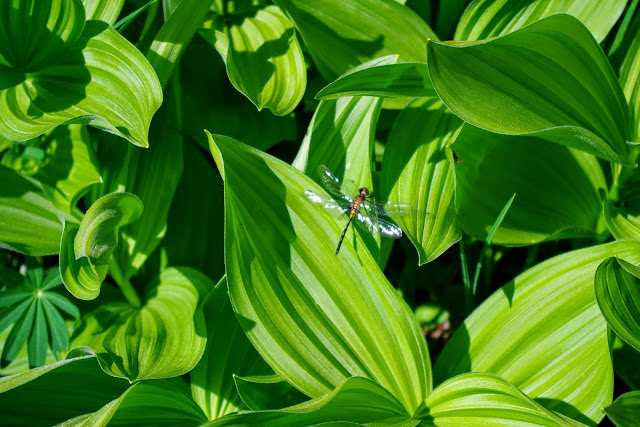 Finishing up with a quick stop at Trillium Lake since we were driving right past it for a couple nice looks at Mt Hood to end the day.. 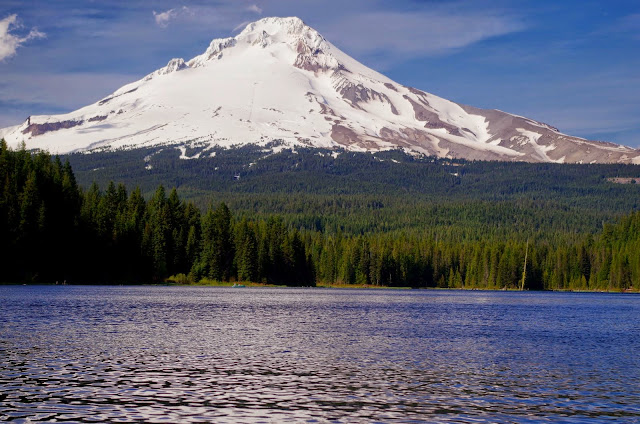 Just a great day in the sun! And now I know where Wamic is

Great photos Gene. Surprising how early balsamroot have started on Tygh Creek - I should head there sooner than later. That uphill is brutal indeed (what gets me there is not steepness, but very little shade) but once you've done it, the next 3 miles have little elevation and the meadows there are awesome.
Top

Hey, thanx... Matt thought we'd see a lot more flowers but everything is just so dry up there. Some of them might already be done. The only hint of anything that even looked like snow was at Trillium Lake, almost the lowest point of the day. Go figure..
Top

I was in that neighborhood today hiking Little Badger Creek and the balsamroot and lupine were definitely past peak already.
Top

justpeachy wrote:I was in that neighborhood today hiking Little Badger Creek and the balsamroot and lupine were definitely past peak already.

We almost did that hike. It was kind of a tossup with School Canyon, Tygh Creek and Little Badger Creek. We were probably the only sets of hikers on all three..
Top

I went up School Canyon Friday afternoon, stayed at the campsite near Helispot and the spring that night, and came down Little Badger Creek Saturday morning. Both trails had a lot of blowdown. The School Canyon trail was especially bad near Ball Point. Only two logs were so large I had to walk around them, everything else I stepped over. The spring near Helispot was running strong.

Some pictures to get a feel for the area.

View from saddle near Ball Point on the School Canyon trail.

View from saddle near Ball Point on the School Canyon trail.

Nice pictures of the falls! I was on the Tygh Creek trail Friday. Ran into patches of snow at the 5100' level. The trail was covered solid from about 5500' on up to Lookout Mtn. Not a soul in sight...
Top

I went up School Canyon Friday afternoon, stayed at the campsite near Helispot and the spring that night, and came down Little Badger Creek Saturday morning. Both trails had a lot of blowdown. The School Canyon trail was especially bad near Ball Point. Only two logs were so large I had to walk around them, everything else I stepped over. The spring near Helispot was running strong.

We cleared School Canyon trail two years ago. Right now it looks like we never touched it...Little Badger will get cleared this fall unless somebody beats us to it...sure hope someone does...maybe then we can get to some other trails...was commenting on n.bumppo's reply...I think I should have used a different button...
Top

It took me five days to get my photos up but it's better late than never! Here are some highlights from last Friday:

In those last two photos you can see just how faint the trail has become - it needs some hikers before it disappears for good!

It was a great day and a great way to kick off summer!
Author of Off the Beaten Trail, 101 Hikes in the Majestic Mount Jefferson Region and PDX Hiking 365. Website: www.offthebeatentrailpdx.com
Top

the one of gene standing in the pines is epic.
Top
Post Reply
10 posts • Page 1 of 1