Despite numerous climbs of St. Helens, I've only been to Johnson Ridge Observatory once - and that was on a crowded weekend day with my in-laws. But Sean's and Karl's various glowing TRs about the wonders of Coldwater Lake & Peak (along with warm weather, full sunshine, a weekday, and an open road) prompted me to give it another chance. After a 2h drive from Portland, my car was one of 3 at the TH (

). I geared-up for a snow climb and headed out to admire the view - which was all that was promised: 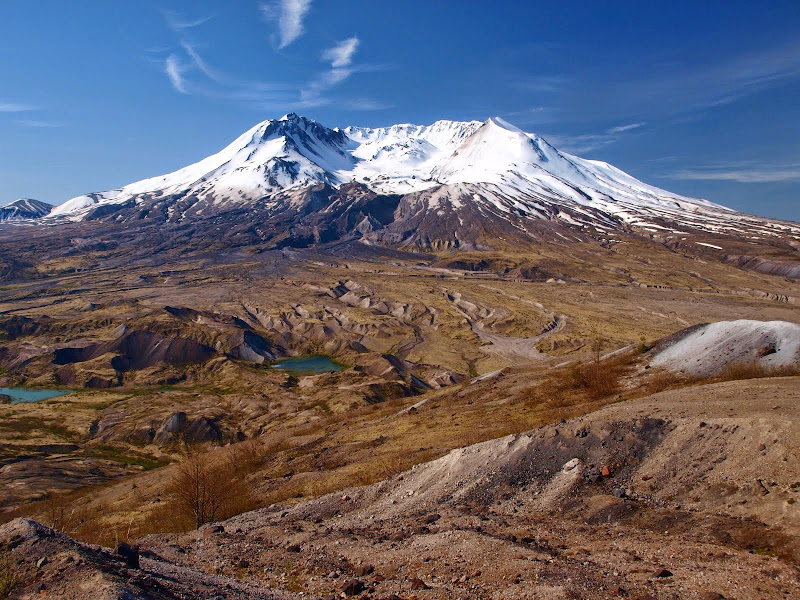 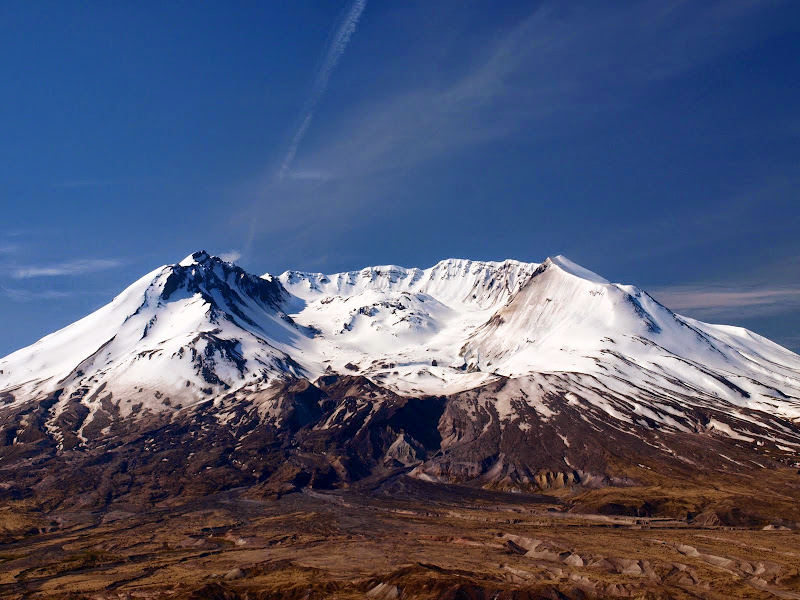 It's an interesting hike in that your goal (arrow) is in sight almost the whole time - it's as though your circling & stalking it. 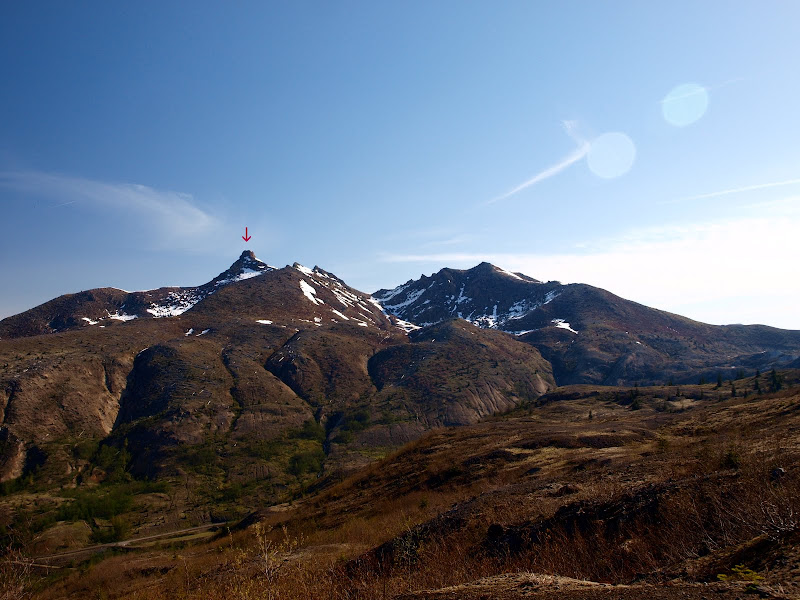 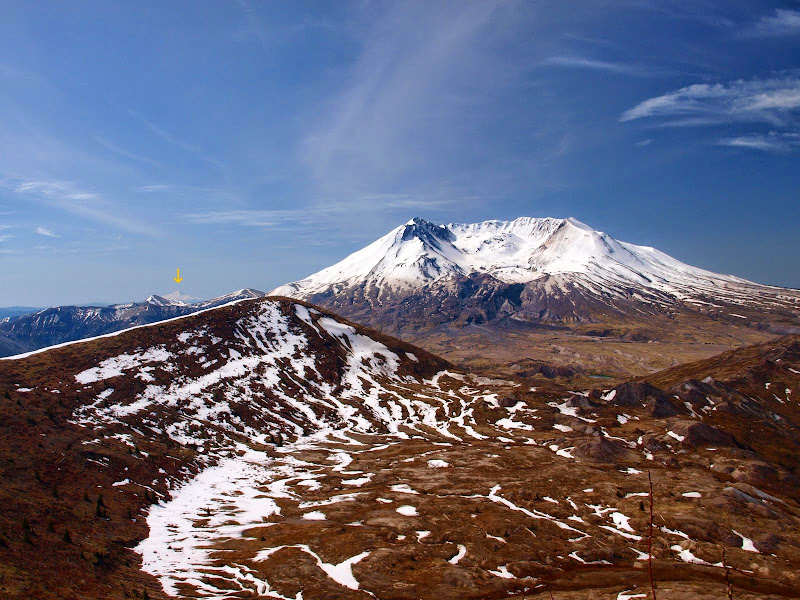 There was an option at about the 4 mi point to bypass the snow-covered trail and go directly up the ridge on dirt. Having brought my snow stuff, I opted to try to follow the trail and did a rising traverse through some pretty soft snow. Enroute I encountered wildlife - the "rare" snow chipmunk. 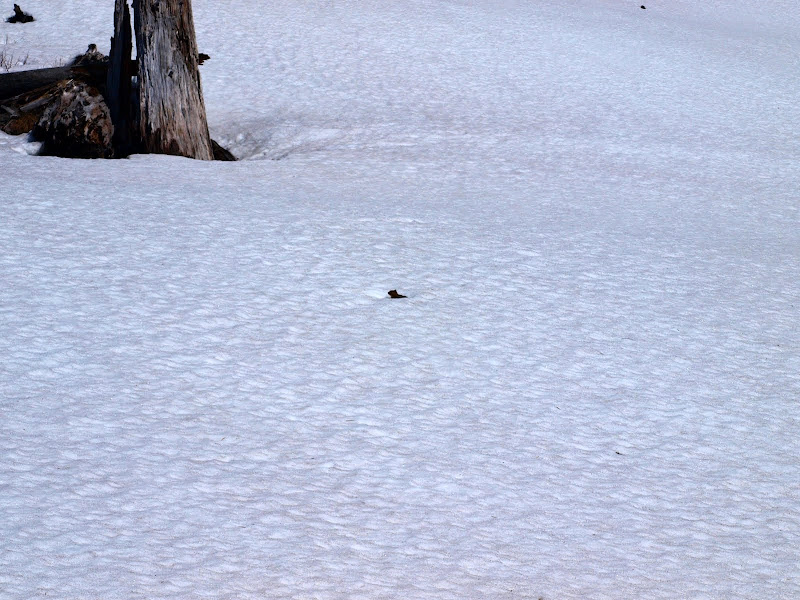 The view just kept getting better and better (if that was possible) as I worked my way up the ridge, 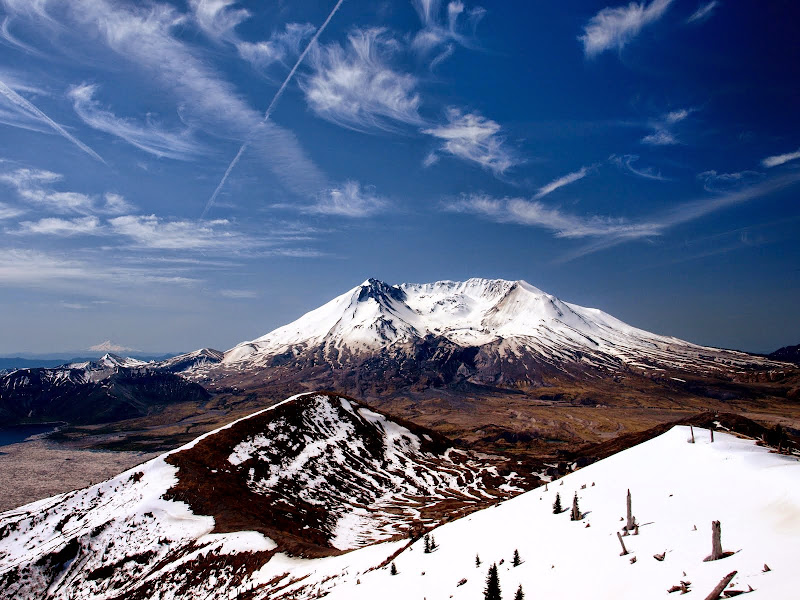 to where I finally got a good view of the ridge leading to Coldwater's E side, which the trail (when it's not buried) traverses. 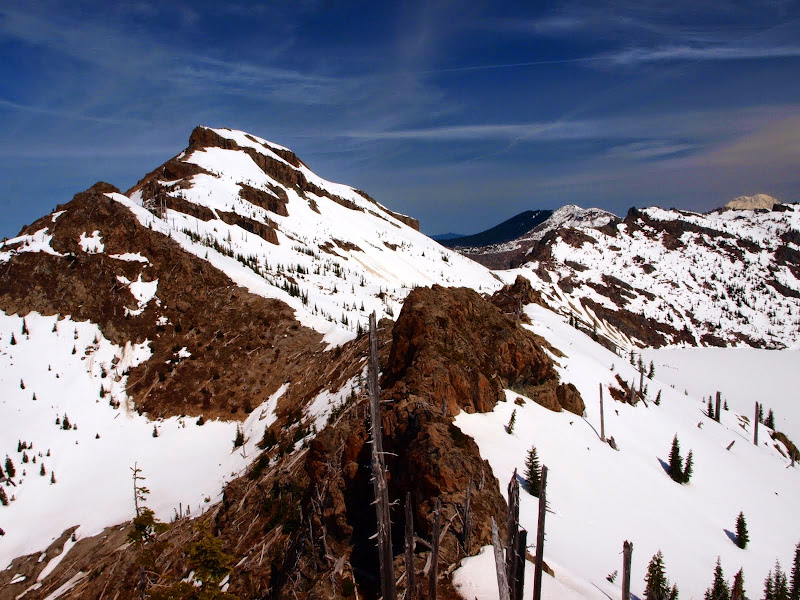 But one look at the avalanche runs (arrows) down the E side and I knew Coldwater's summit was not going to happen for me today. 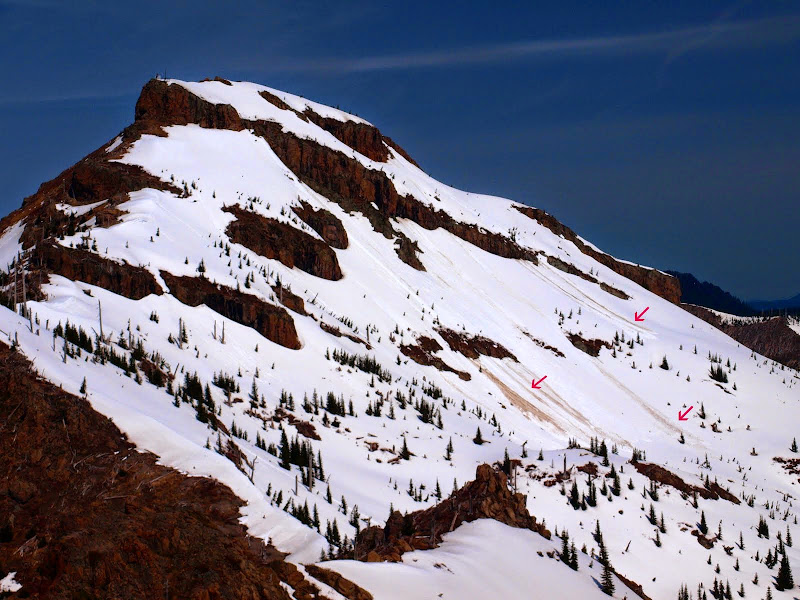 I'd like to do the traverse and climb up on snow but it's probably going to be at least a month before conditions have settled sufficiently. So, a little exercise, some lunch, views of St. Helens Lake & Rainier, 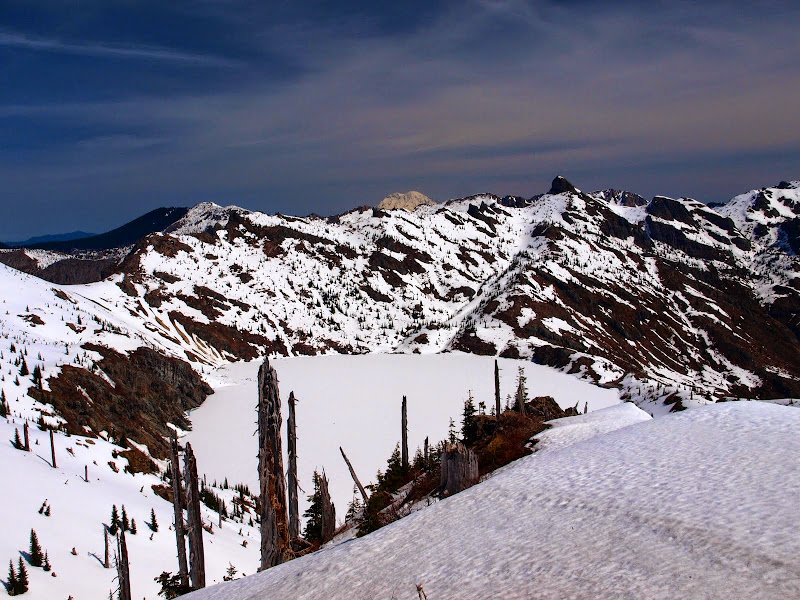 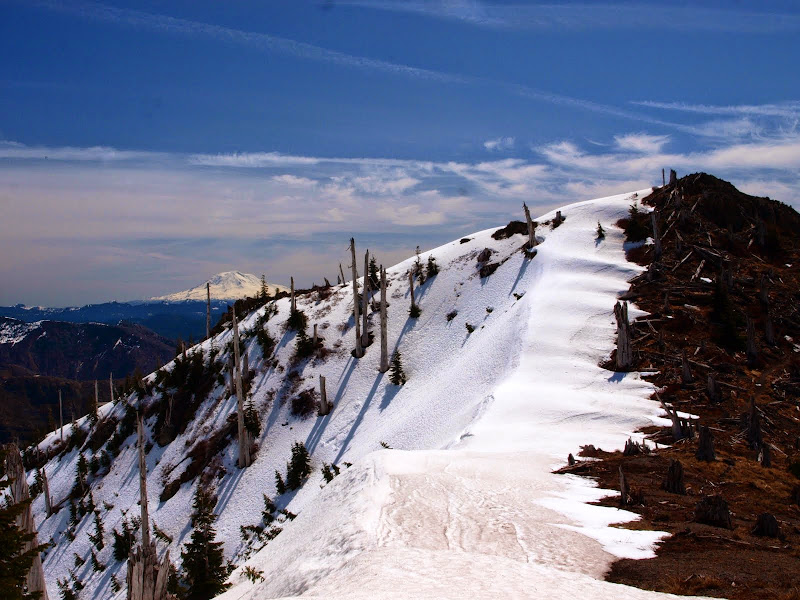 some admiration of the life working its way back into the blast zone, 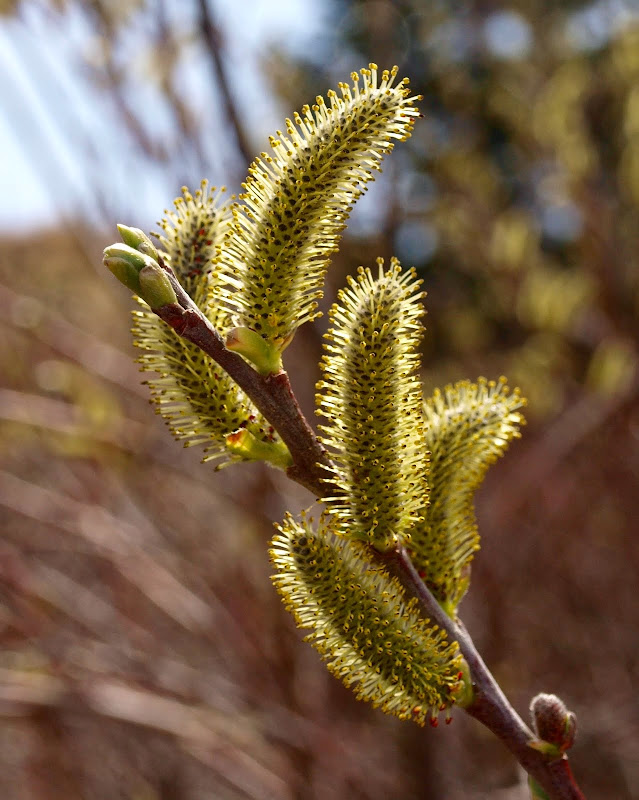 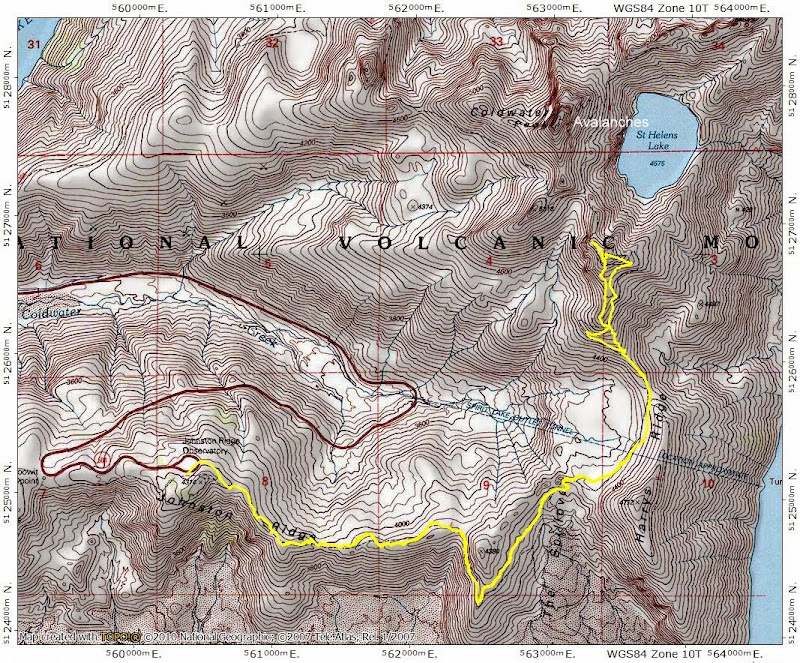 Yea those were my tracks you saw yesterday the snow was sloughing off small avalanches all over the basin around St helens lake. It was so still and quite I could her them as I sat there the slopes were just waiting for a little extra weight for a trigger.

I took this photo of my high point from my truck. Like I said in my tr there was bad steep snow and cliffs all around me were I stopped. It appears we turned around at the same place, the trail down and thru the arch to Coldwater peak is a little delicate in the best of conditions.

By the way its Coldwater peak not Clearwater

Roy wrote:
By the way its Coldwater peak not Clearwater

Thanks. Note to self: Drink beer after, not while, I'm writing a TR.

Great pictures. That point before the arch is where I was stopped by snow several times, too. One time I was having lunch there and mountain goat walked right upon my spot, and even stayed around for some pictures.

It's amazing & rugged country beyond there, but certainly not a place to be in avalanche conditions; give it 2-3 weeks and the snow will settle and it will be safe to travel (with crampons and axe).
Top

Excellent photos! Once you've had a taste of that spot, ...

(Yes, the views really do just keep getting better!)

It does hold the snow for a pretty long time, to be sure. I really couldn't get past the saddle in the middle of June last year! Mid or even late July offers (mostly) dirt all the way up, though.
Karl
Back on the trail, again...
Top

VanMarmot wrote:Despite numerous climbs of St. Helens, I've only been to Johnson Ridge Observatory once - and that was on a crowded weekend day with my in-laws.

Beware Bruce: That Mt Margaret Backcountry is very addictive! BTW, your pictures are superb.
Some people are really fit at eighty; thankfully I still have many years to get into shape…
Top


VanMarmot wrote:Note to self: Drink beer after, not while, I'm writing a TR.

I know the feeling.

These were with my old (but very light) Olympus E-420 and an 18-42mm telephoto. It's a great little camera but uses proprietary (and no longer available) memory chips and can't use regular batteries. My other camera, a Pentax K-30, uses standards chips & takes AA batteries, but it's heavier.
Top

It is - I just have to get past the 4h RT drive. And weekdays - if you can manage it - are definitely better if you're going to start at Johnson Ridge.
Top

VanMarmot wrote:It is - I just have to get past the 4h RT drive.

Yes, but I know that you can never get addicted to Nesmith Point, so you will have to return!
Some people are really fit at eighty; thankfully I still have many years to get into shape…
Top
Post Reply
12 posts