Been doing a lot of business trips to the E coast lately and a surprising number of return flights have taken me right over Mt Defiance, Greenpoint Mtn, Tanner Butte, etc. Like a time lapse of watching the snow melt from 12,000'. All I could do was gaze longingly at all the missed hiking opportunities.

So, finally, I had the chance to break free from travel for a bit and go hiking. I chose the classic Nick Eaton Ridge - Greenpoint Mtn - Herman Ck loop because I needed the workout and was hoping for good views. It was sunny at the TH but by the time I'd climbed to the first viewpoint on Nick Eaton, the clouds were making some moves and sunlight was in and out. 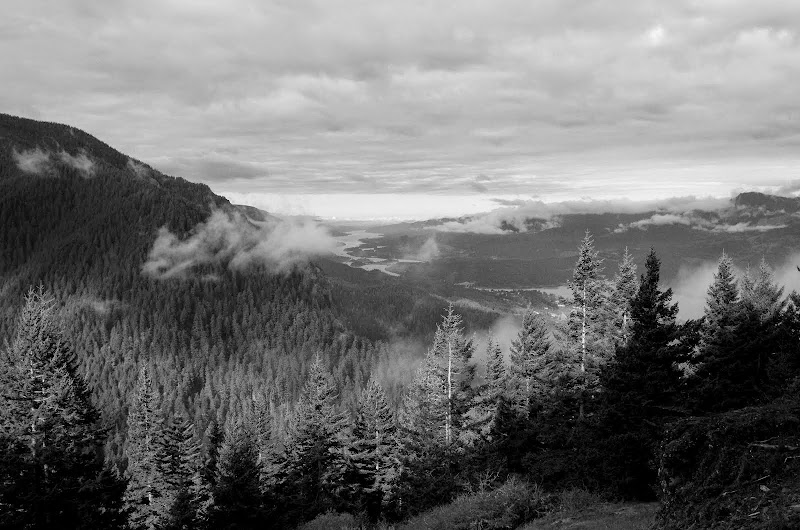 The Nick Eaton (#447) was in good shape - no snow - all the way up past Ridge Camp to its junction with the Gorton Ck (#408) and the Plateau Cutoff (#412) trails. There was someone camped at Ridge Camp but otherwise the trail was mine. At 4200', all of the trails on the plateau just disappeared under 2-3' of very walkable snow, 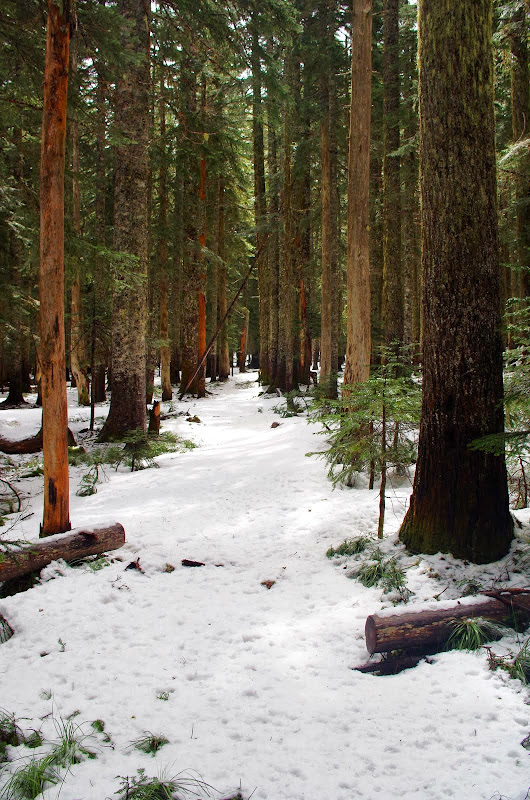 so I just trended XC S toward the summit through a forest with black trunks below and decorated with moss and lichen above. 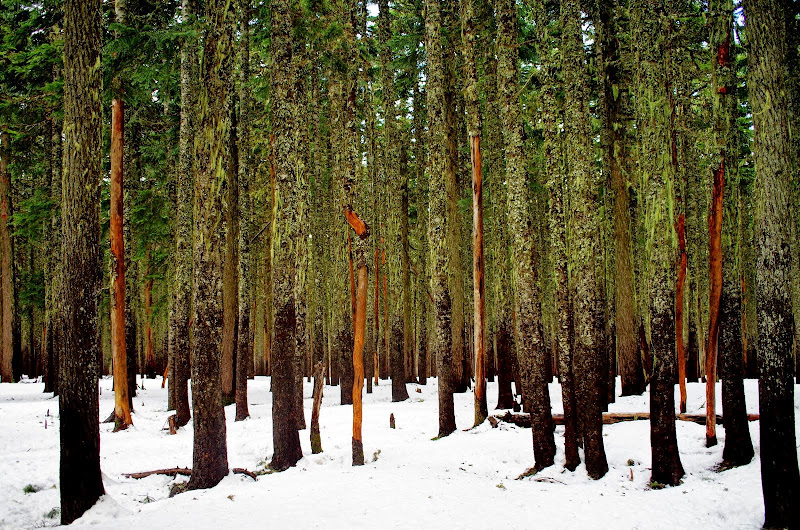 I was worried that the clouds were going to mess with my views but by the time I made it to the untrodden summit, the clouds had started to (almost) disspate. 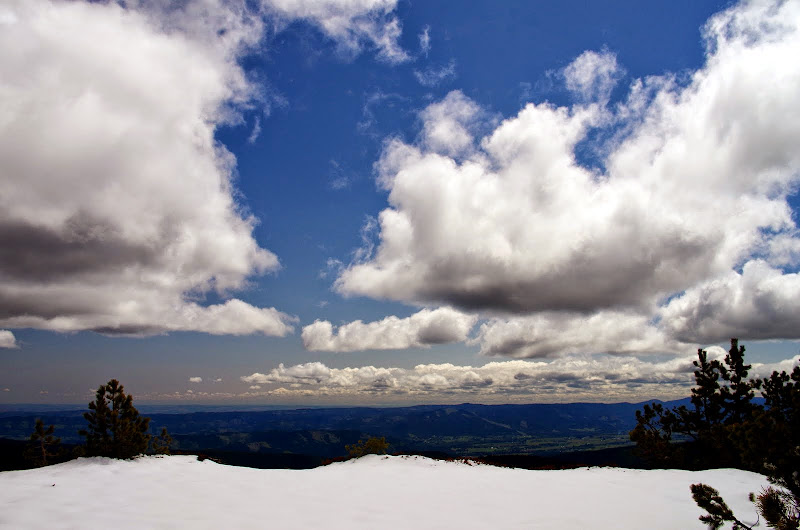 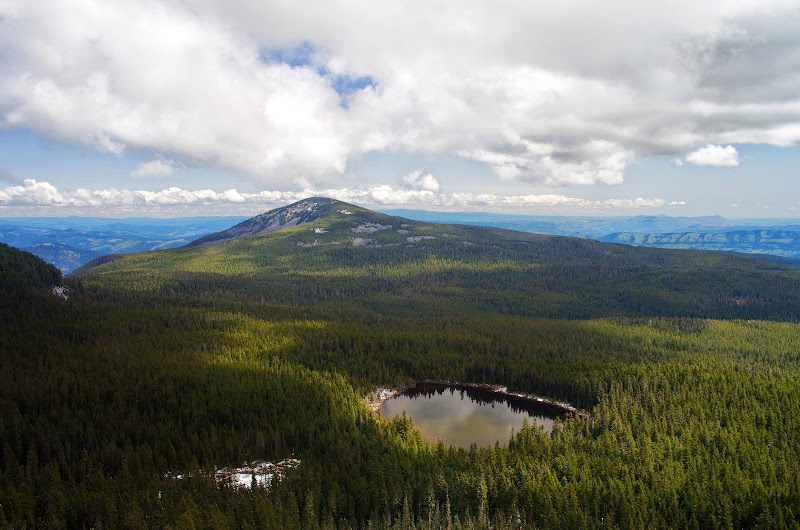 The clouds were still having their way with Adams to the N, 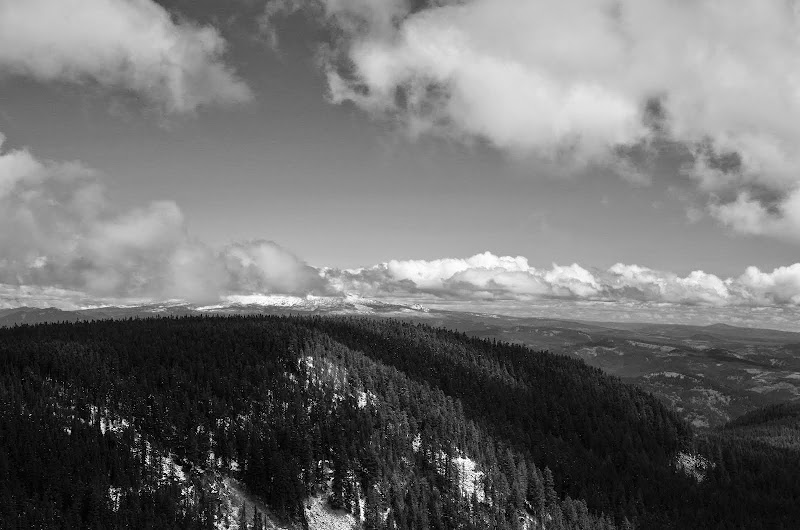 but Hood would occasionally peek through the bands of clouds. 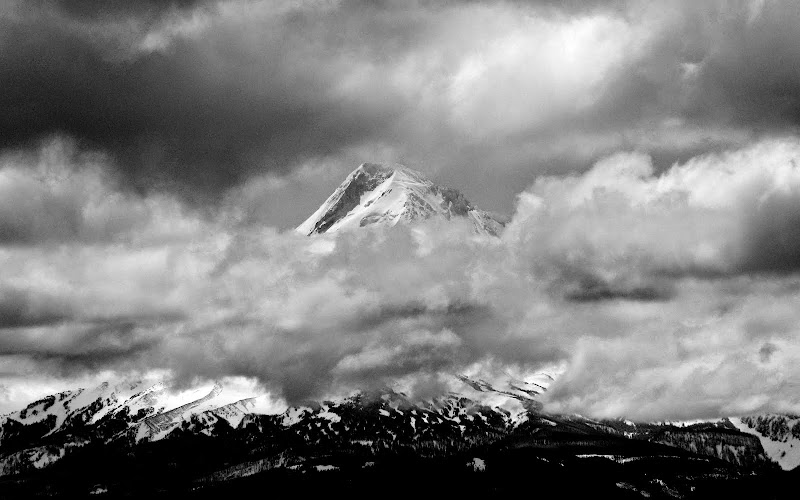 After lunch, I continued S on the 408 trail, with the snow getting thinner and thinner as I descended - until it was just a skim coat at the junction of the Rainy-Whatum (#409), Gorton CK (#408), and Herman Ck Cutoff (#410) trails at the little shack. 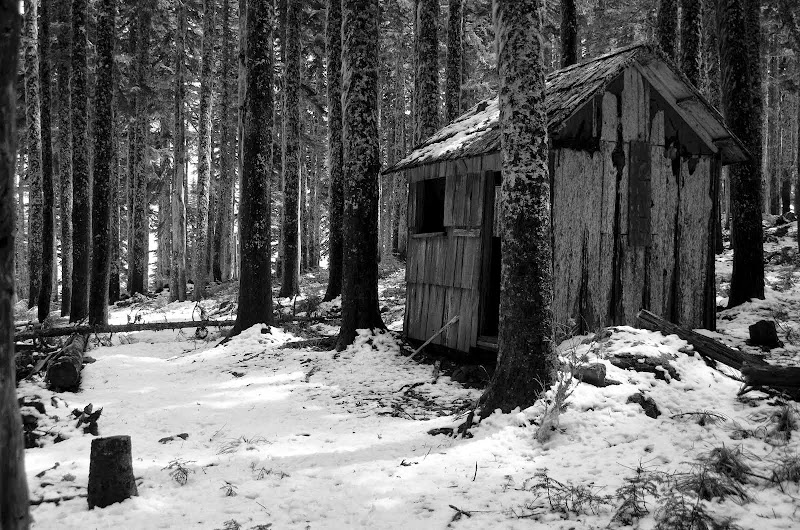 The 410 trail was rough and wet in spots, but quickly got me down to the Herman Ck trail (#406) at Cedar Swamp Camp, where there was a profusion of early season (i.e., still fresh) skunk cabbage, 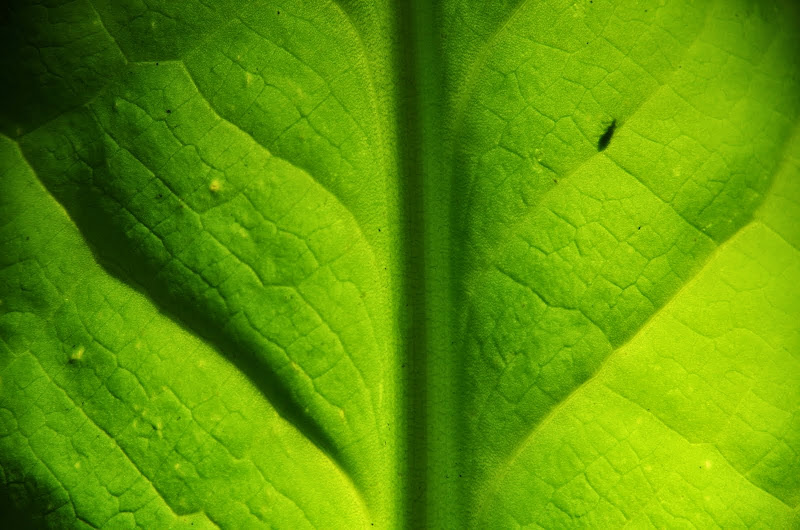 and my first slug of the season. 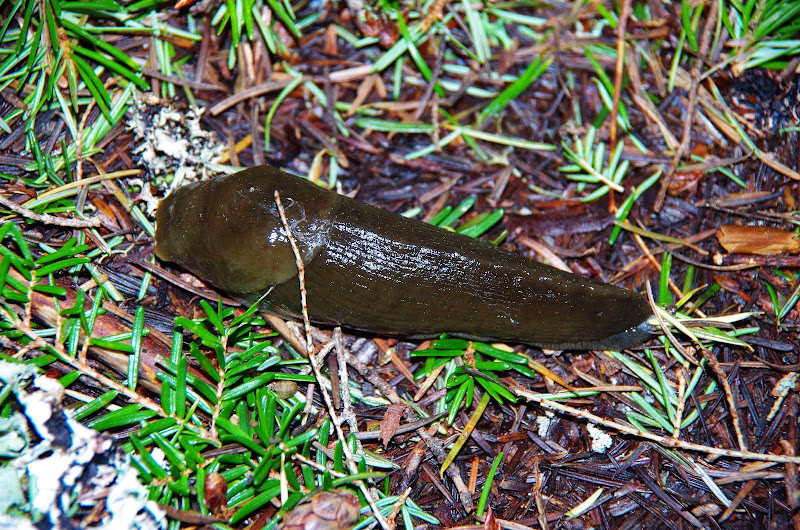 Then it was just a very pleasant sunny and warm stroll along the 406 trail, 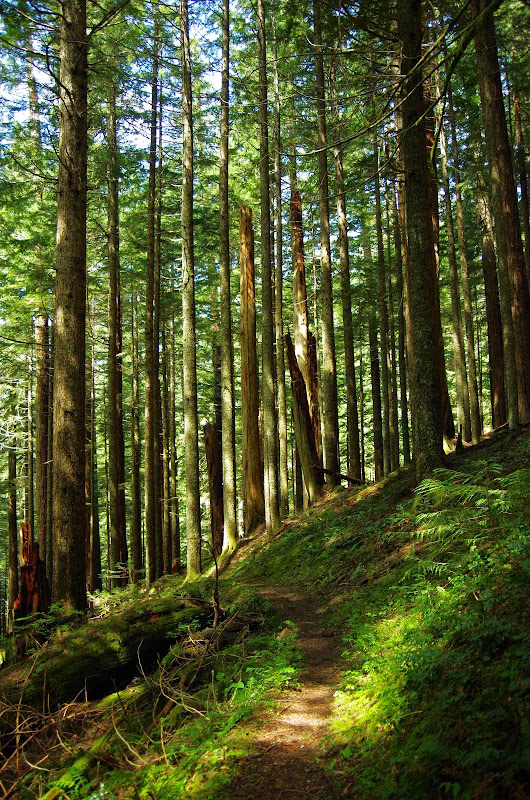 where I was passed twice (coming and going) by a lithe trail runner - my second person of the day. The trail winds in and out, in and out (etc.) of numerous canyons, across many small creeks (actually some not that small due to the snow melt), and past several solid waterfalls on its way to the old road. 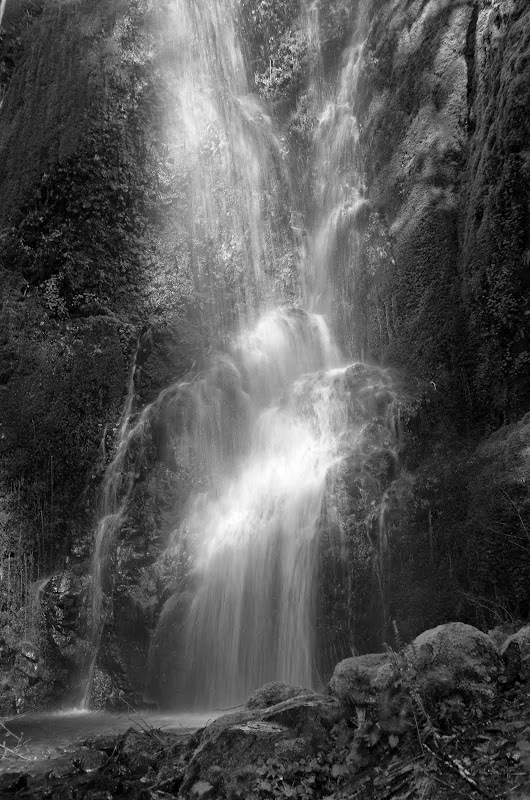 I passed 4 people + dog on the road (3rd and last people sighting of the day) before coming to a large, totally reflective puddle. 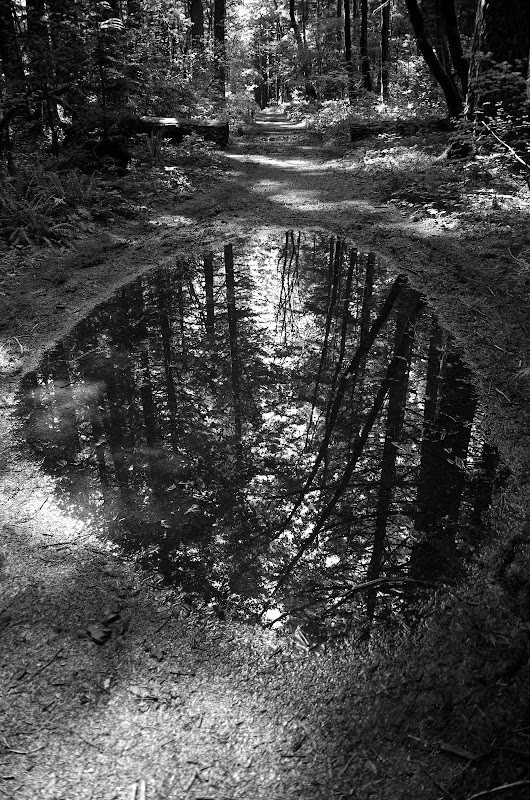 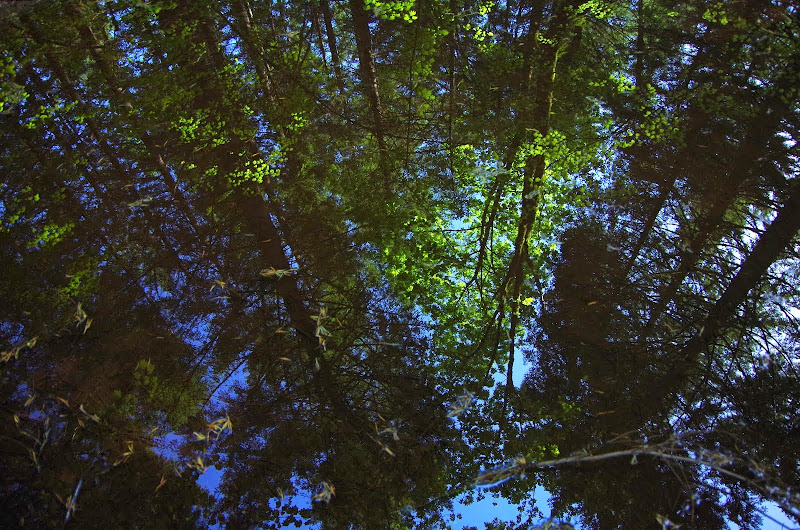 - beats an airplane seat any day (but I still had to bring my own snacks). After seeing only six people + dog all day, I was surprised to find the TH parking lot full and cars strung out along the road back into the campground. Looks like lots of other folks got out to enjoy a hike too. 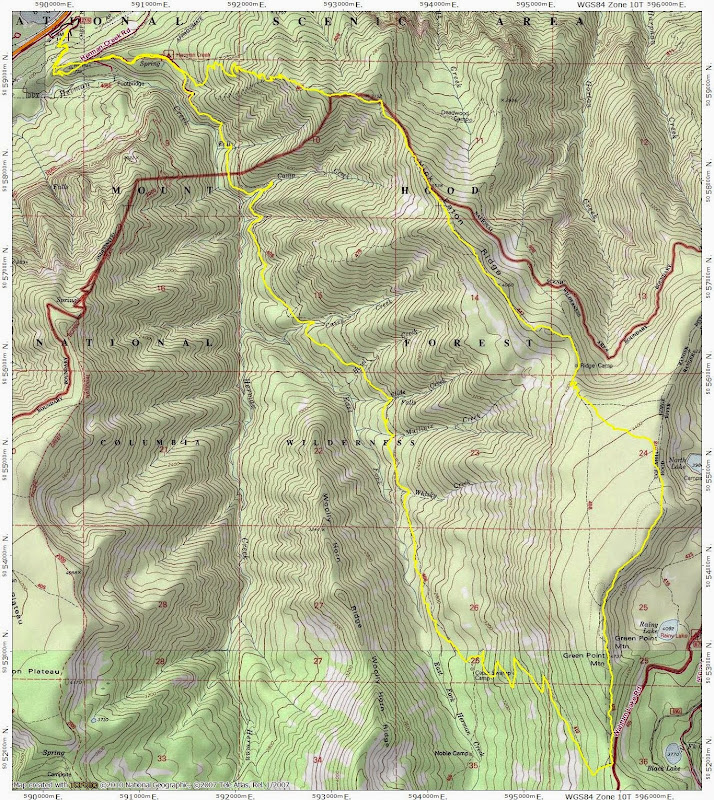 Nice TR, thank you for sharing. There is something about the Nick Eaton trail that calls me. I must do this loop, but I will give it a week or so to melt out. I need to be able to see the trail.
Top

I love this loop. It is so peaceful. Thanks for sharing. It seems I might be able to get to Tomlike this weekend, given your report. Very helpful!
Top

I loved your mix of black and white and color. I was in the area several weeks ago and I certainly remember that puddle ....times about 30! Well done!
Top

I wasn't far behind you, Bruce. I ran into the Ridge Camp overnighter, who had followed your snow tracks in trailrunners, at Cedar Swamp. He was appreciative. Beautiful day, beautiful pictures!

Jack wrote:I wasn't far behind you, Bruce. I ran into the Ridge Camp overnighter, who had followed your snow tracks in trailrunners, at Cedar Swamp. He was appreciative. Beautiful day, beautiful pictures!

Thanks! I wondered if the camper was going for the summit - doing it in trailrunners seems a little hardcore, as my feet were a little soggy even with boots. But still a great day!
Top

Jack wrote:I wasn't far behind you, Bruce. I ran into the Ridge Camp overnighter, who had followed your snow tracks in trailrunners, at Cedar Swamp. He was appreciative. Beautiful day, beautiful pictures!

It was good seeing you guys out there! I was the trail runner, getting my 15mi Sunday trail fix

tschalpi wrote:It was good seeing you guys out there! I was the trail runner, getting my 15mi Sunday trail fix

Nice seeing you out there, Christof. The Herman Cr. Tr. must be great on the trail runners’ feet, not to be mistaken with the overnighter's on Green Pt. It’s in great shape. I just posted mentioned the tree laying across the trail, where you were turning around, on the Trail RX page.
Top
Post Reply
8 posts • Page 1 of 1