John Muir said, "The clearest way into the Universe is through a forest wilderness." He also said, "The power of imagination makes us infinite." I think these quotes do well to describe the creativity and wide range of skills and interests that are present in this community. Whatever it is that drives us to spend time in a "forest wilderness", even if there is no forest at all, gives us a chance to reconnect with the most important things in life. Jojo and I kept that in mind as we hiked two of the most beautiful trails in the Columbia River Gorge on Saturday. We started our trip from the Herman Creek TH a little before 7 am and hiked up to Wahtum Lake. The open meadow full of oak trees just past the Camp Creek crossing was bursting with flowers. Lots of Gold Stars about to bloom, as well as lots of Sea Blush and Larkspur:

The creeks were running nicely but weren't too difficult to cross. Whiskey Creek in the morning with its many large logs at the crossing point:

Quintessential little gorge stream-let on the way up to Cedar Swamp:

The Skunk Cabbage in this section is getting big fast:

Looking left to right from my pack, this trio of trees(cedar, doug-fir, hemlock) is always a good sign that you're closing in on the swamp. Some recent blowdown has fallen close-by:

We took a short break at Cedar Swamp to admire the big trees and have some snacks. The stretch from the swamp to the crossing of the east fork is one of the best in the gorge. Lots of big trees and an incredible forest setting up there. Some of the biggens didn't make it through this years storms:

The trail up to the Mud Lake junction around 3,760 is snow free with lingering patches for the next 1/4 mile or so. The talus slope south of the lake junction is half covered in snow and once back into the trees things looked like this up to about 3,900 - 4,000 feet:

Above 4,000 feet there was solid coverage in most places:

To avoid some very steep sidehilling on the final few hundred meters up to the ridge where the Tomlike turn off is, we shot straight up the hillside and intersected the anthill trail:

Being me, I forgot to charge the batteries for the gps. We had map/compass as always but the old mental map was sufficient. Actually nav was pretty straightforward as we just headed southwest on Herman Creek for a little while longer and hopped on over to the Rainy-Wahtum Trail. The last mile or so of the Herman Creek trail over to Chinidere Mountain looked a lot like this in terms of snow depth:

We followed Rainy-Wahtum around the east side of the lake with a few nice views down to the water:

The old road bed had many snow free stretches below 4,000 feet. A few patches at the lake and the parking area but no concessionaire:

Wahtum Express down to the lake shore and the PCT:

Wahtum Lake is the deepest lake in the Mt Hood National Forest and was apparently called, "Wahtum" by the Indians:

The sun came out as we enjoyed a nice long lunch in one of the empty camp spots:

Now it was time to go see some waterfalls:

Lots of friendly backpackers acquired conditions about the lake and the trail higher up. Basically, the entire Eagle Creek Trail up to Wahtum is melted out despite a short 1/4 mile stretch just before the lake. Jojo spotting Chinidere Mountain in the distance as we descended down to Eagle Creek:

A few stream crossings and another short break at one of our favorite camp spots on EC:

Fairy Slippers were in bloom, interesting to see the white ones up close:

Quite a few downed logs on the stretch near Eagle-Tanner:

This little stream is always really pretty this time of year:

Eagle Creek above the falls:

Looking down stream over the rugged gorge as Jojo hikes along the high cliffs near Twister Falls:

Peeking down into the falls:

A couple and their dog were wandering back and forth along the cliffs taking pictures etc. This poor little guy was pretty tuckered out but the owners didn't seem to mind him running back and forth off leash while peeking over the edge

I hate to be the dog rant guy but it seems some just don't respect the safety of their dog or others out there. On a happier note, there were lots friendly hikers at Tunnel Falls who really got a kick out of the PH buttons, thx B2B!

The afternoon rain became a little steadier as we passed Loowit Falls:

More Sea Blush on the way out:

There is always time to derp out in front of the old petrified stump near the TH:

Enjoying the awesome tunnel under the freeway that was put in 1998 and the last pic of the day:

The bad weather had started in pretty good by now so Jojo and I hiked over to the old Pacific Crest Pub in Cascade Locks. I think its called the Cascade Ale House now but it served as a nice dry spot for Jo to get some hot food and store the packs. I grabbed my keys and ran the last 3.2 miles over to the Herman Creek TH reaching the car just before dark. The rain just hit harder and harder as I ran back but it was an incredible feeling and a great way to end another awesome adventure in the Columbia River Gorge.
Top

Nice! And good timing as I'm planning to do the PCT/Chinidere/Eagle Creek loop soon. Sounds like snow just along the very top of that route? Also, I think I interpreted from your report that the camps at the lake at the bottom of the "express" are fundamentally snow-free? Lastly, any sketchy areas of the high-running Eagle Creek?

PS How does one get a PH button!?
Top

As usual, great trip report Sean. I always look forward to yours.
Robin

Great report, Sean. Thanks for the details on current conditions.

Thanks for the kind compliments everybody

Mike, there will probably be some snow near the base of chinidere or on that 406m chinidere cutoff down to the lake. The campsites on the south shore were pretty much all melted out IIRC. No problems on EC but I heard about some folks dealing with a dicey crossing when they did an eagle-tanner loop last week. Look forward to seeing your TR

Great report on two of my favorite trails! When I was a little kid playing at Eagle creek, I always looked down at the water. It was only when I returned as an adult after many years absence that I looked up and notice how amazing the canyon is. Thanks for the great report and conditions update.
Woodswalker
Top

A 25 mile hike followed by a nice little run - all in a days fun!

And Wahtum almost completely melted out. The ridge north of the lake is always the last thing in the Gorge to melt, so I'm not surprised there is a couple of feet of snow left there.
Top

Nice shot! Tim & Melinda and I were toodling around that part of the canyon on Saturday also.
It had been years and years since I took the little side trail to the base of the slot canyon / loowit and it was gorgeous.
Here's that same spot in your pic, from below. Can you spot Melinda? 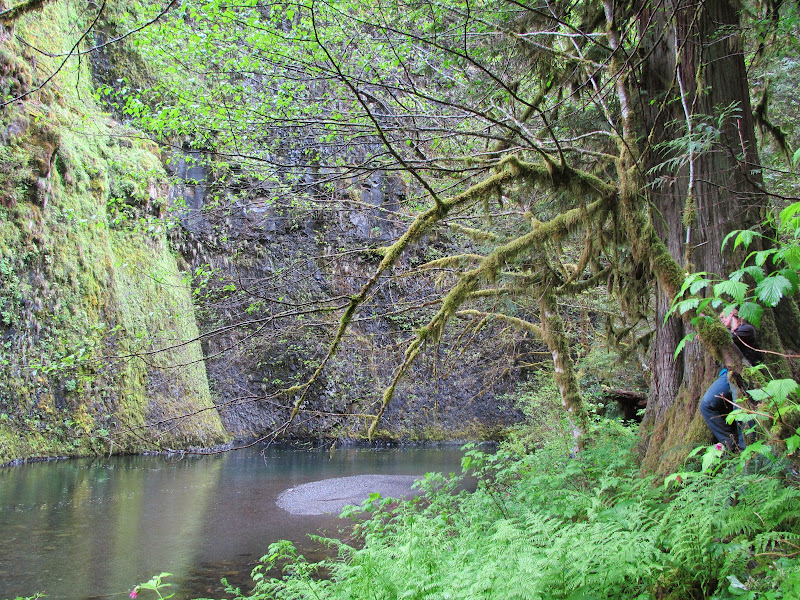 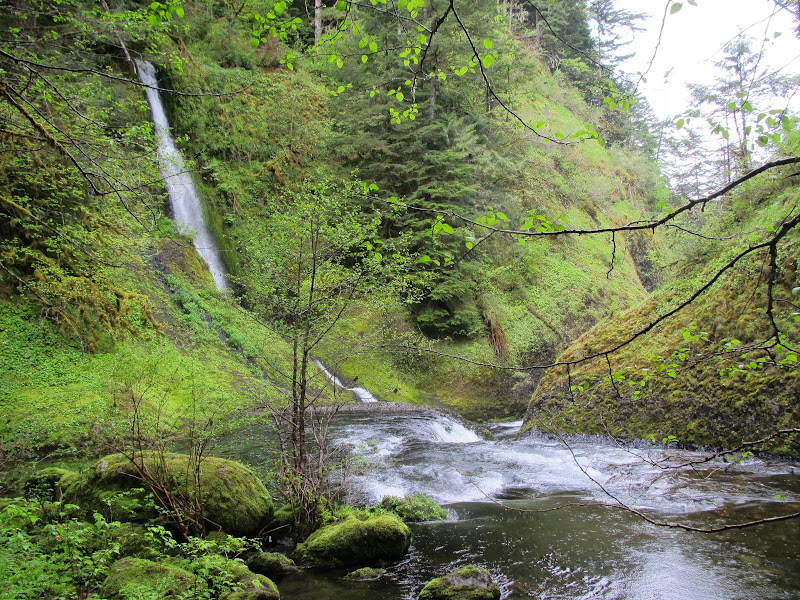 Sounds like you guys enjoyed your day as much as we did. Last time I did your loop, I took three days

Do you do anything for leg muscle development and conditioning other than trail running?
Top

woodswalker wrote:Great report on two of my favorite trails! When I was a little kid playing at Eagle creek, I always looked down at the water. It was only when I returned as an adult after many years absence that I looked up and notice how amazing the canyon is. Thanks for the great report and conditions update.
Woodswalker


True that! The first time I went up I was about 12 years old. A couple of friends and I were looking for punchbowl to go swimming and somehow we made it all the way to tunnel falls thinking, "this is an awfuly long 2 miles"

Anyways, I was so freaked by the cliffs I'm not sure I even noticed any of the falls.

drm wrote:A 25 mile hike followed by a nice little run - all in a days fun!

And Wahtum almost completely melted out. The ridge north of the lake is always the last thing in the Gorge to melt, so I'm not surprised there is a couple of feet of snow left there.


Thanks, drm. What is the earliest you have seen the ridge north of Wahtum melt out?


Cool pics, payslee! It would have been fun to run into 3 legends out there

We thought someone from PH had to be in the canyon somewhere!

Do you do anything for leg muscle development and conditioning other than trail running?


Hey xrp, I don't have a routine and don't do any weightlifting or anything like that really. I just sagg it out and hope to make it home before the bucket falls over

Actually I work as a landscaper and there are so many different physical tasks in that type of work it really helps prepare for me the type of hiking I like to do. Yesterday we mowed, edged and trimmed about 18 lawns and got off around 5:30, then I had to mow my neighbors ginormo lawn next door. I am pooped but am about to go do it all again today

I also like to play basketball occasionally, run stairs and use the school playground to do all sorts of exercises. Most of the muscle development just comes from hiking a lot though.
Top
Post Reply
10 posts • Page 1 of 1