It was beginning to look as though my snow shoes would stay in the back of the closet, unused, through a whole season. When I began to imagine piteous whimpering coming from the closet (

), it was clearly time to make an effort to take the shoes for a hike in snow. But where? If FR 60 was open far enough, I could go to the S end of the Indian Heaven Wilderness, hike up to Red Mtn (views) and then loop back via Indian Race Track (snow shoe adventure). And so this most bluebird (

) of days found me parking at 3300' on FR 60 - the road being completely clear right up to the point where I was planning to park anyway. 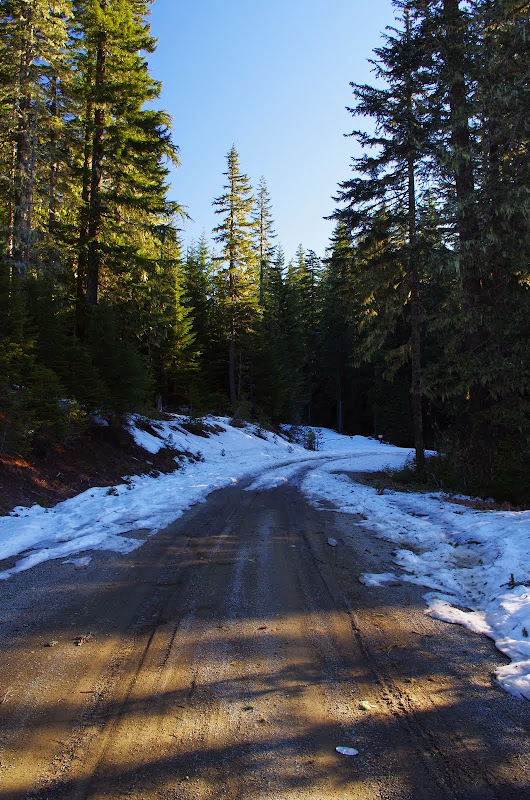 NFD 6048 - the service road to Red Mtn - was snow covered from the start, so the snow shoes went on and stayed on for the rest of the day. At first they were useful for traction and some breakable crust but, as the day warmed, they were essential for not floundering around in soft snow on the way back. 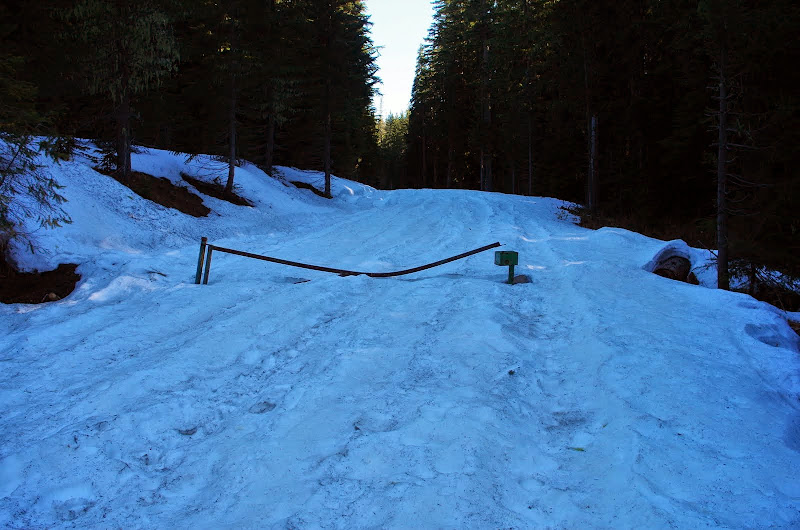 At the 4600' level, I left the road and went directly up - over Pt 4642 - to the lookout. The snow was in perfect condition for climbing with snow shoes but the wind had risen to about 25-30 kts and it was pretty cold, despite all the sun. 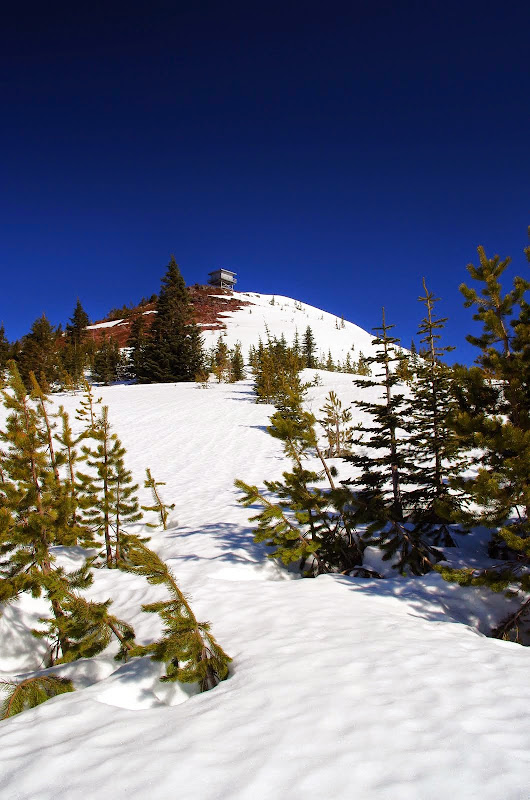 Once on top, the views were excellent, with St. Helens and Rainier to the N, 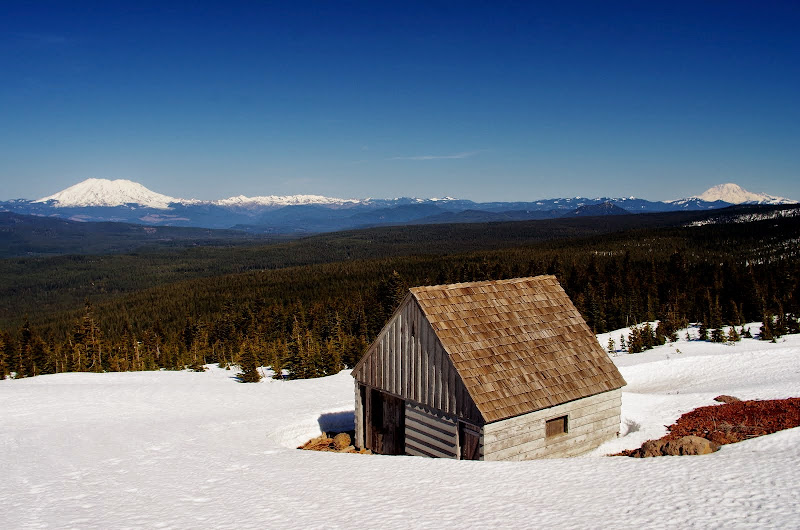 Hood and Jefferson (arrow) to the S (by this time I was sheltering behind the LO to escape the wind), 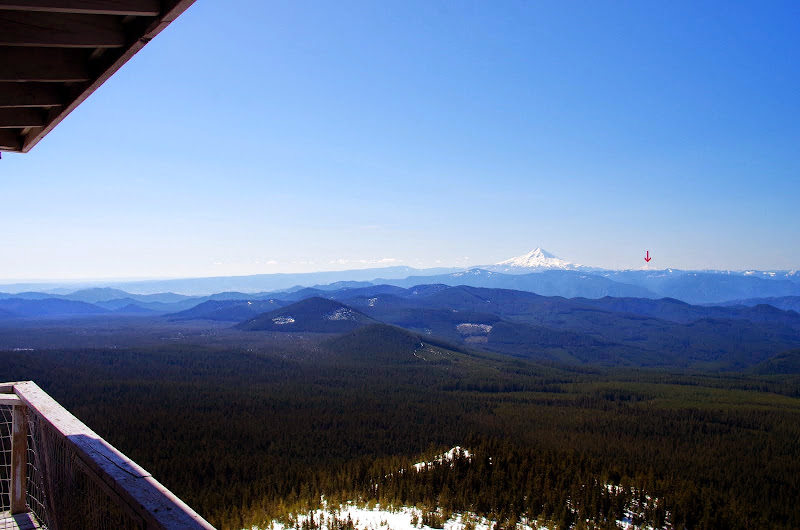 Little Huckleberry and the Big Lava Bed to the SE, 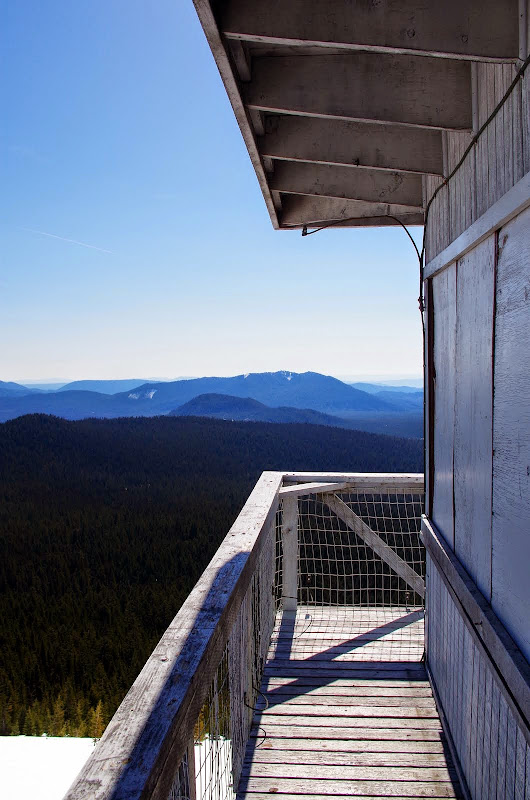 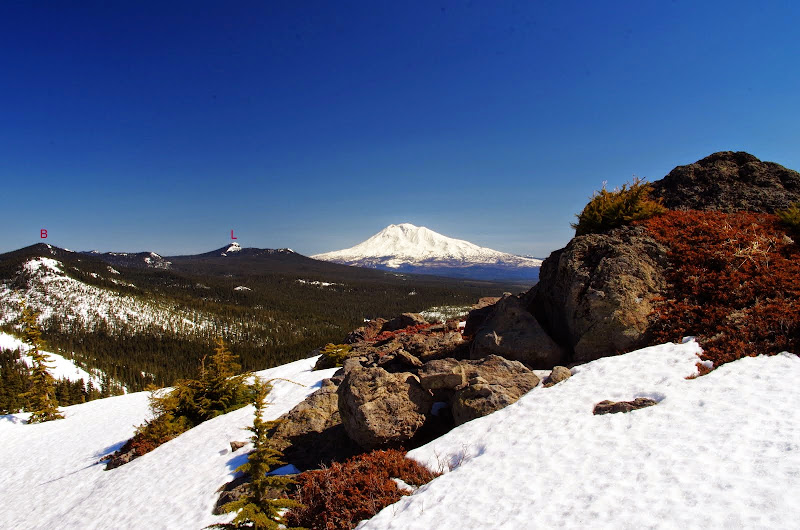 From the LO, I went N along the ridge to the saddle, dropped W from there down a drainage (easy when it's full of snow), worked my way E across terrain covered with 4-6' of easy to walk on snow, 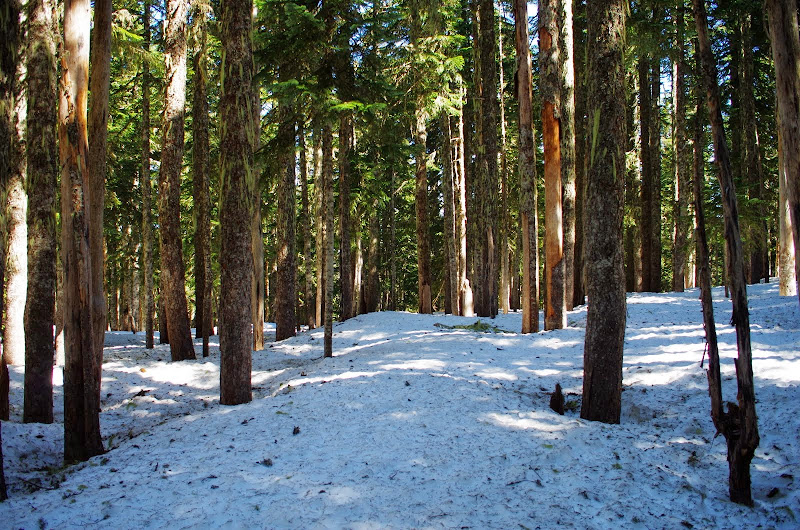 and finally emerged at the Indian Race Track, which looked like this today, 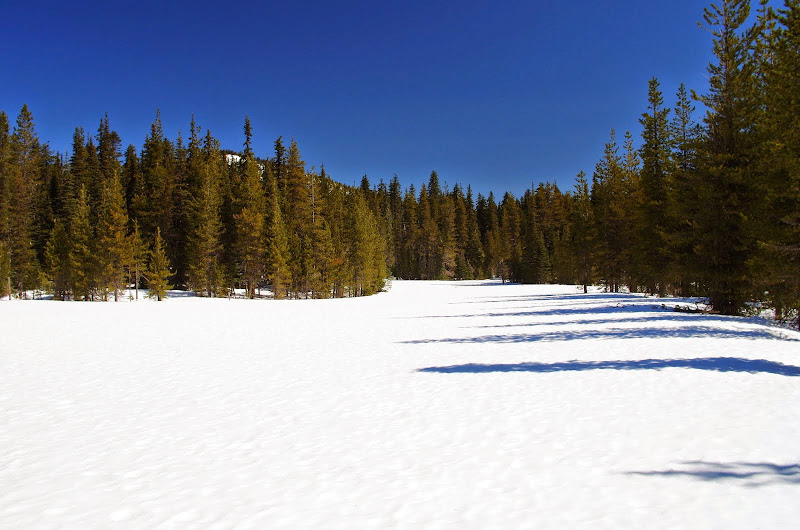 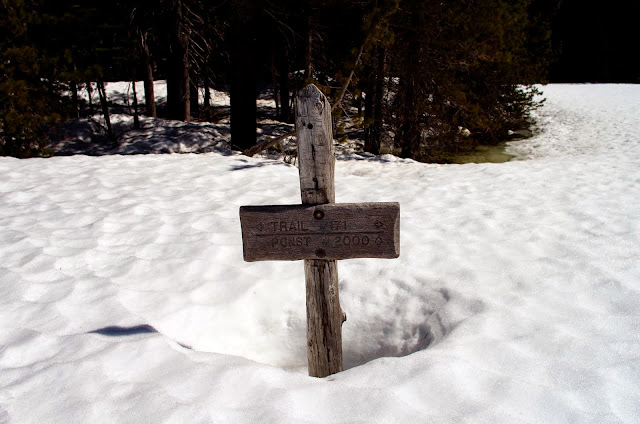 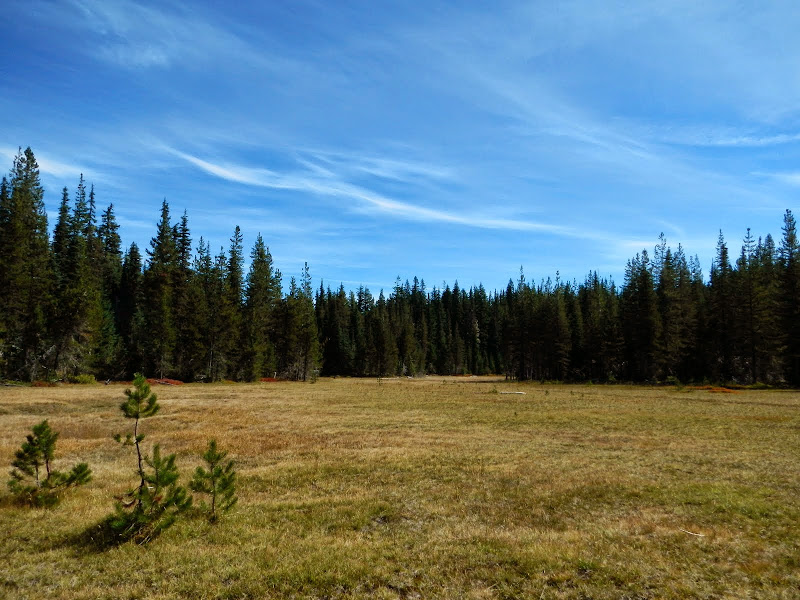 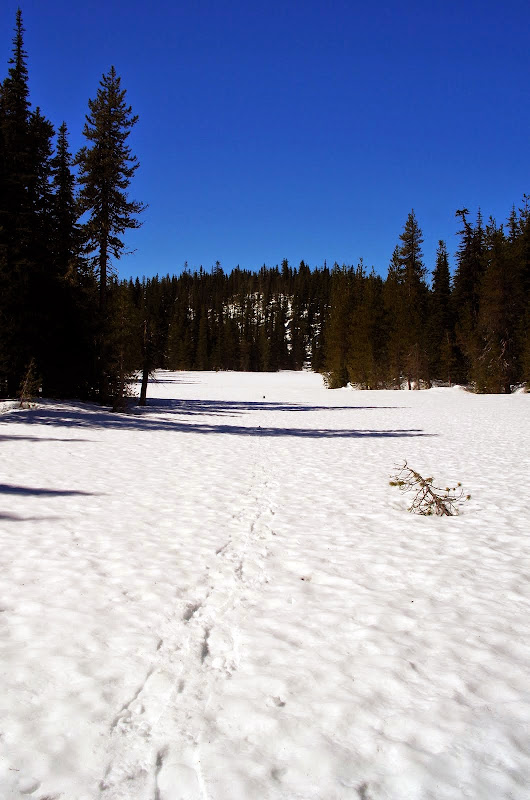 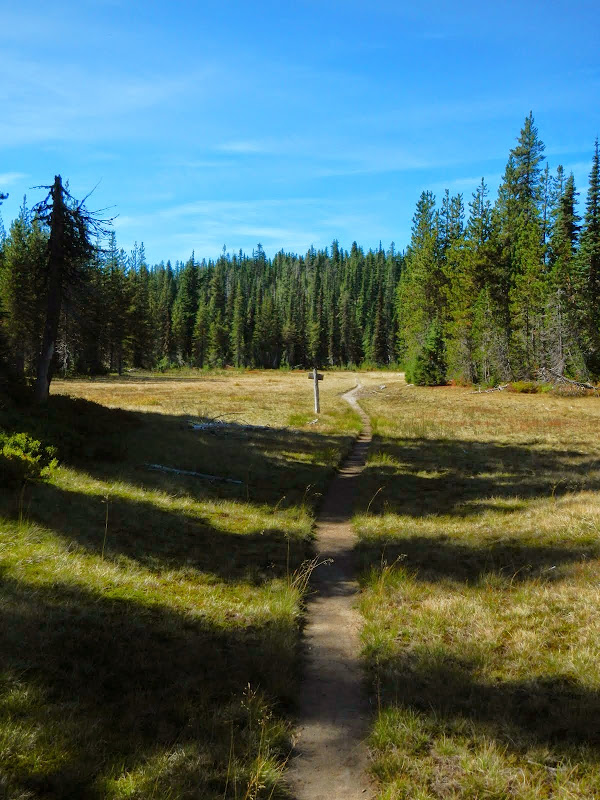 On the way back, just before Green Lake, there's a small meadow which allows for a view back toward the LO (arrow). 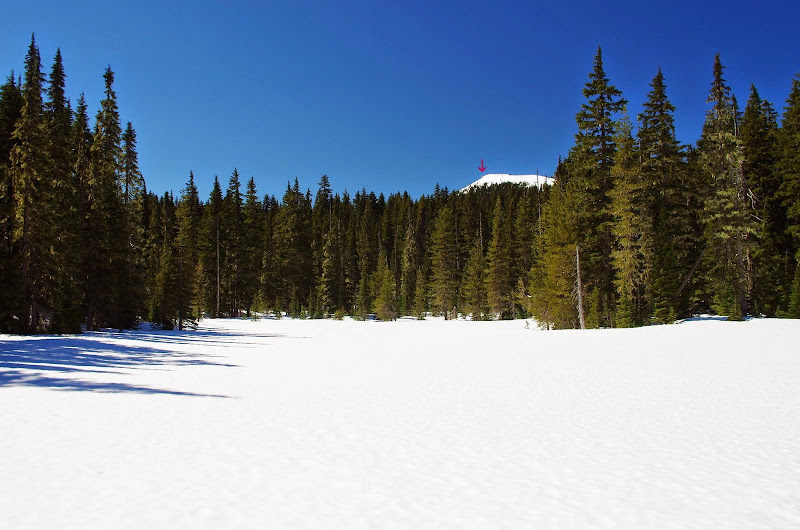 Green Lake was completely buried in snow, but I found the Sheep Lake sign, 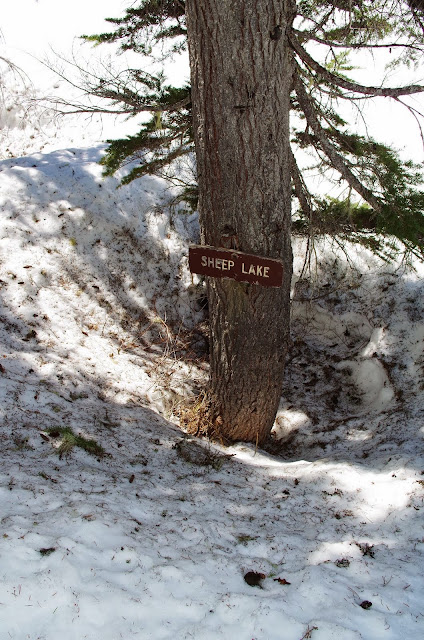 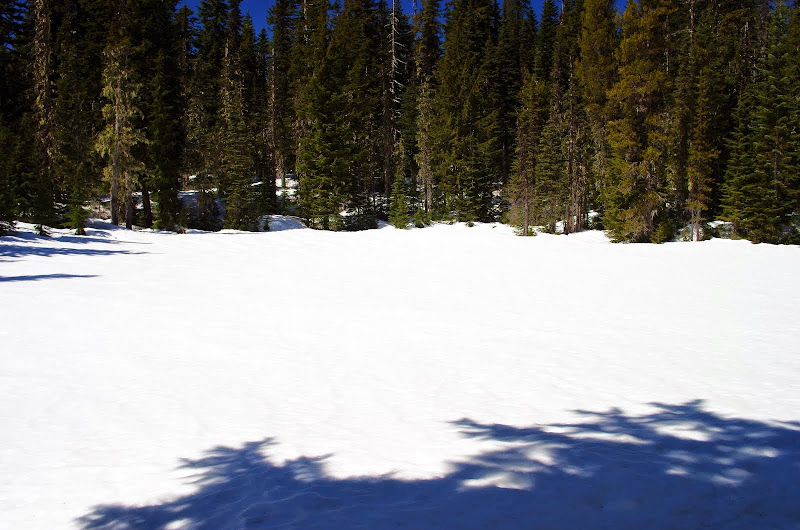 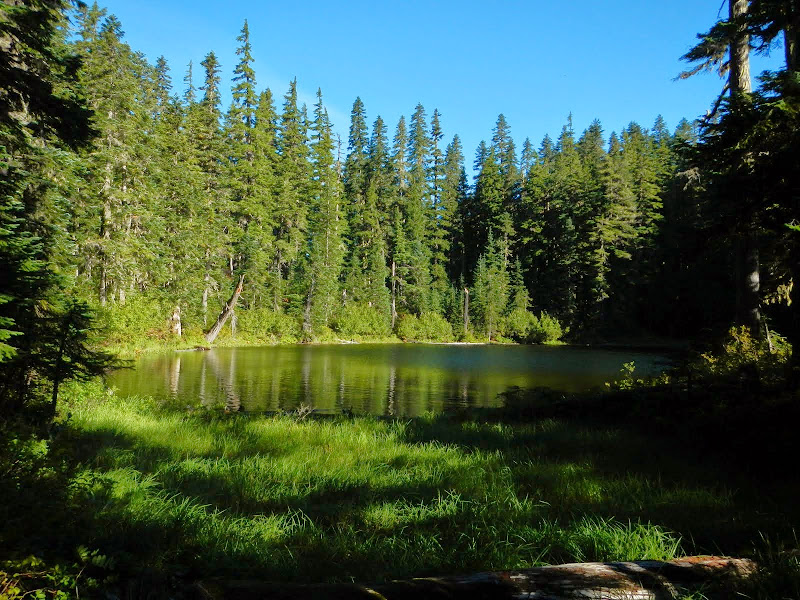 After that it was pretty much a straight shot on easy snow back - mostly along the fully buried PCT alignment - to the TH on FR 60 and then a walk along the road to my car. 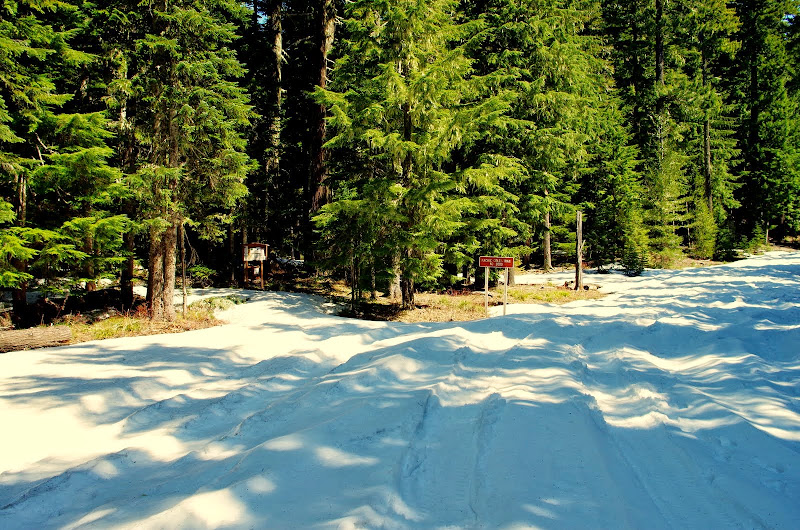 There were some old snow shoe tracks along both the road to the LO and the PCT, but I saw no one else the whole day. 10 mi RT, 1500' EG - all on snow with snow shoes and some solid route finding. Fun! And no more faux whimpering from the closet! 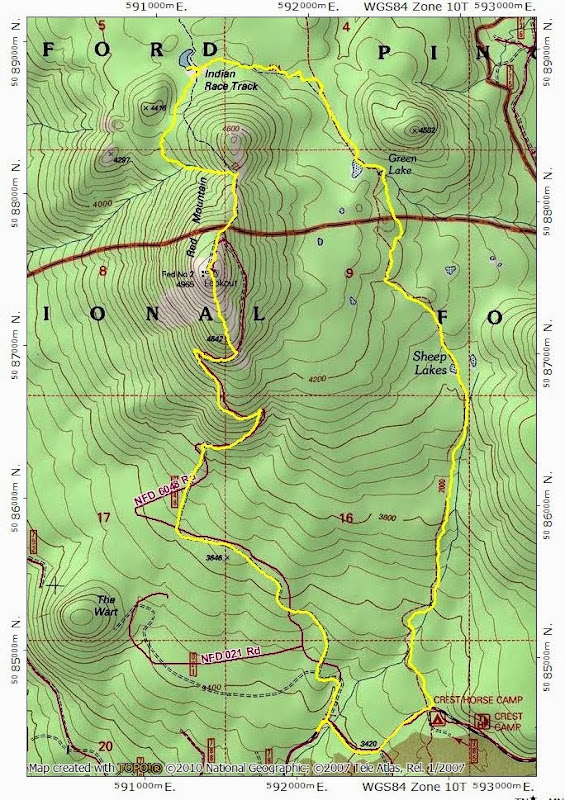 Nice time of year to do this loop. You might get the feeling that you're not on a road . . . .
Top

Dropped by the trailhead to make sure your car was okay... oh, and also skiied up to the lookout!

Saw your snowshoe tracks and was wondering if there was another portlandhiker in the area. You were off down to the Racetrack before I arrived. Very windy on top. Nearly got blown off the ridge. Great views. Lounged on the catwalk in the sun for awhile. Many thanks to Drm for the inspiration!

Great pictures. Looks like a very early melt for IHW this year, as long as we don't get late season snow like last May.
Top

So, how were the skeeters?