The trail around Henry Hagg Lake (S of Forest Grove) is not one that shows up in many hiking guides for the Portland area. Internet searches suggest the trail is mostly about mountain bikes, mud wallows, and a 50k run/wallow in February. I did it a few years ago in the Fall and thought it was pretty nice as a hiking trail - not one of the great trails of the NW, but a nice walk. So, on this most bluebird of days, and not wanting to do another hike in the Gorge just yet, I drove S on Hwy 47 past Forest Grove - which allowed me my one view of Hood for the day. 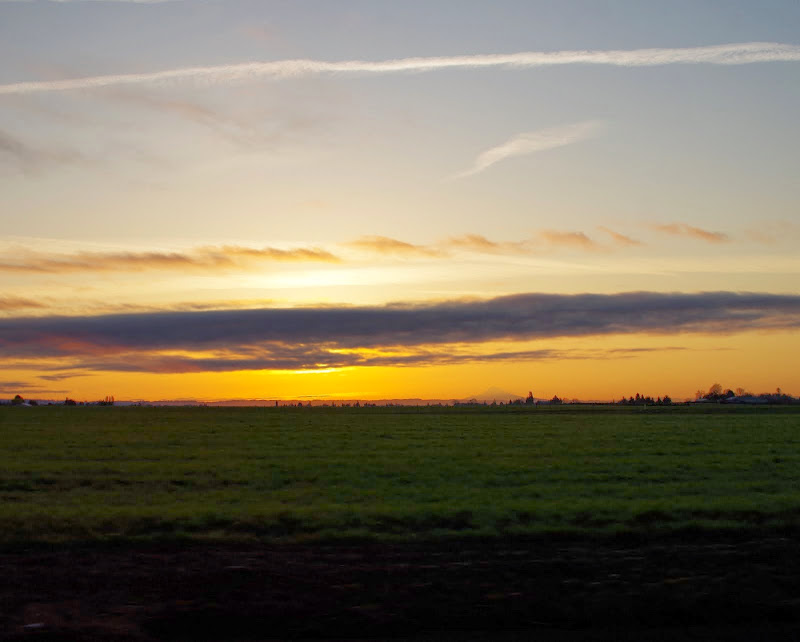 After paying the $6 entry fee, I parked in the "A" Boat Ramp lot, and then located the trail, which is marked just often enough with these colored poles and placards. 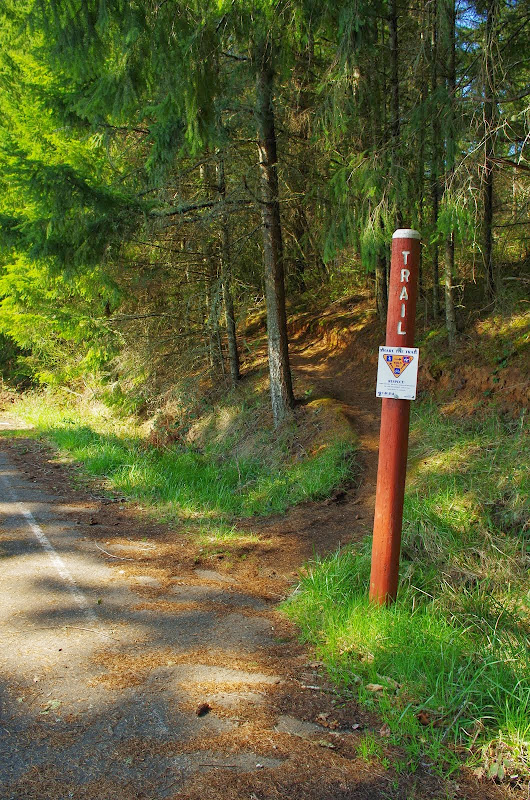 I did the loop counter-clockwise, starting N on the essentially level E side of the loop trail. The trail in this area runs through and past a variety of trees, many wearing streamers of moss, 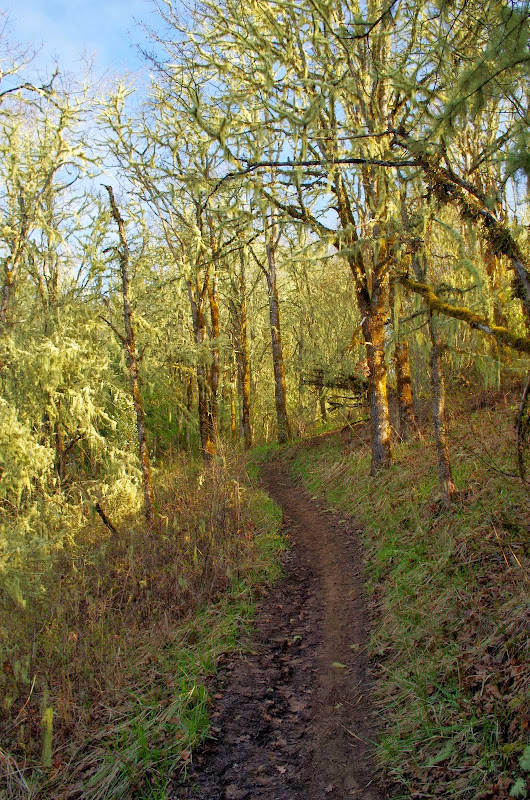 others just starting to flower white in contrast to the moss, 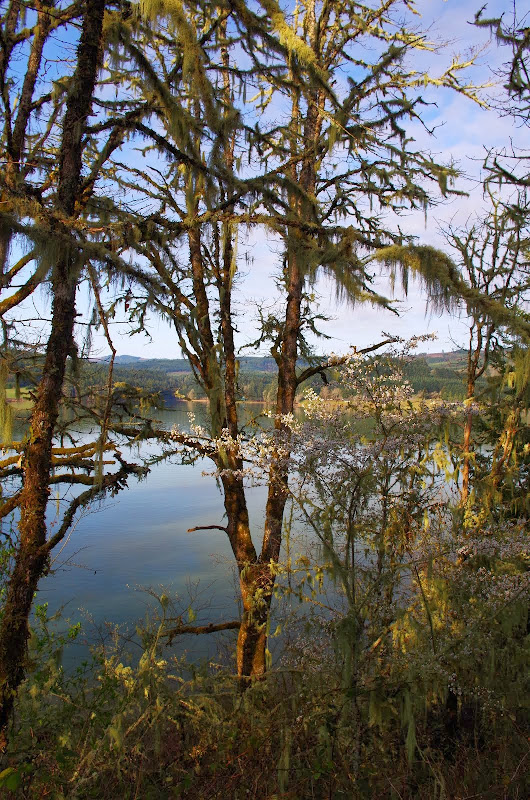 and yet others which I can't help but see as living sculptures. 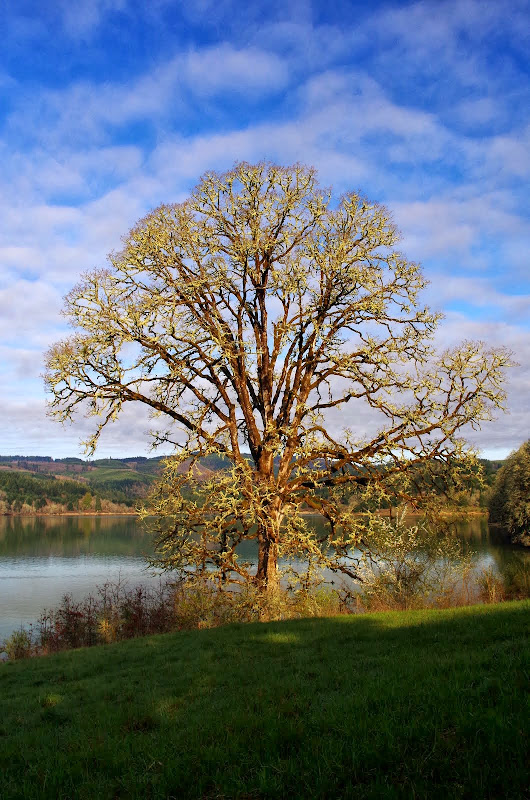 In the trees, these was evidence of beaver activity, 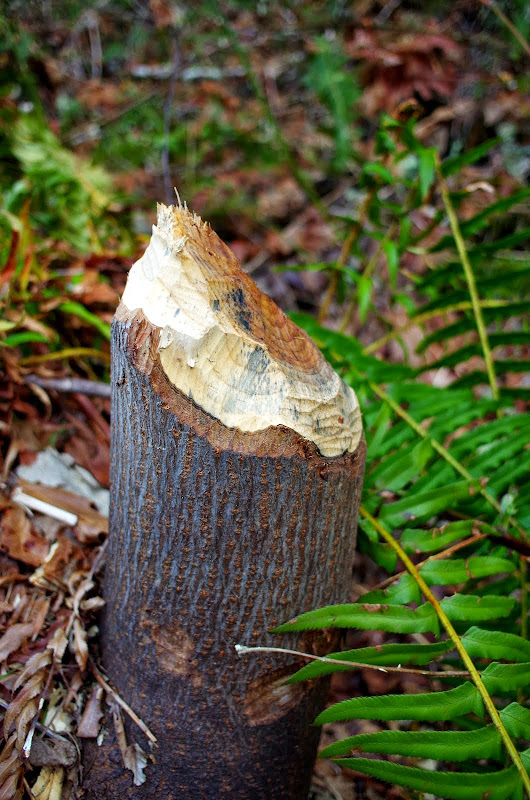 and the trilliums were starting to emerge. 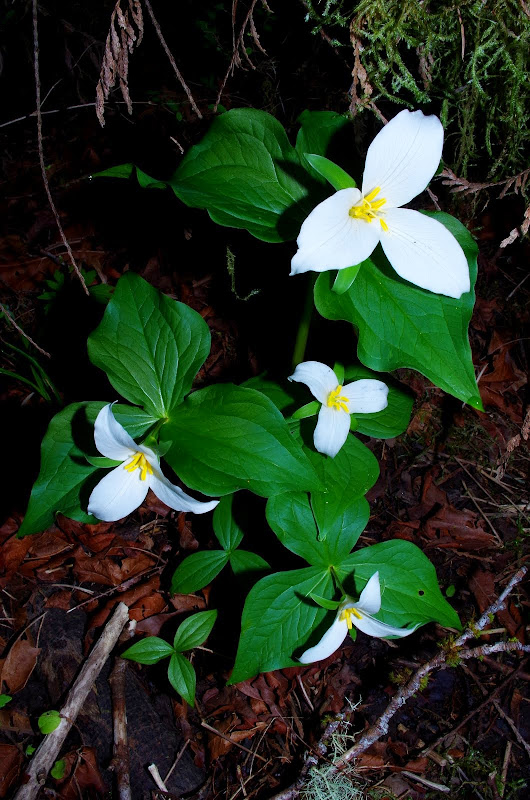 Starting on the E side had the advantage of putting the sun behind me, so that the lake and its surrounds (including a still visible moon) were colorfully lit by the warm morning light. 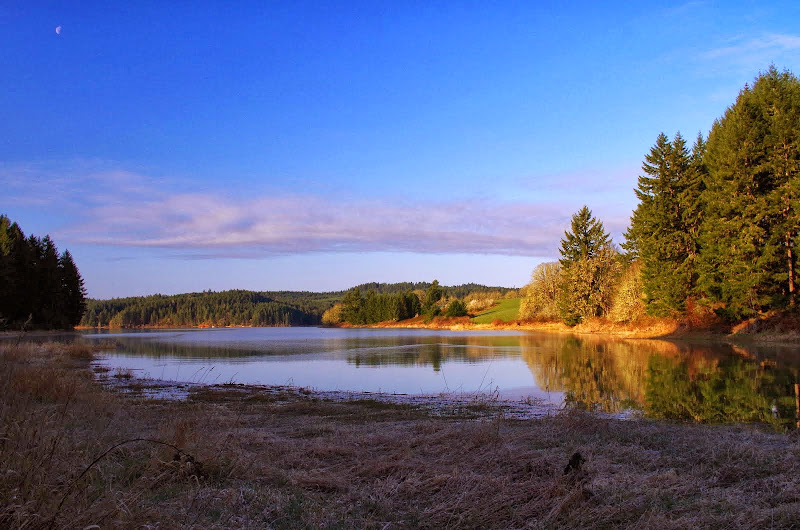 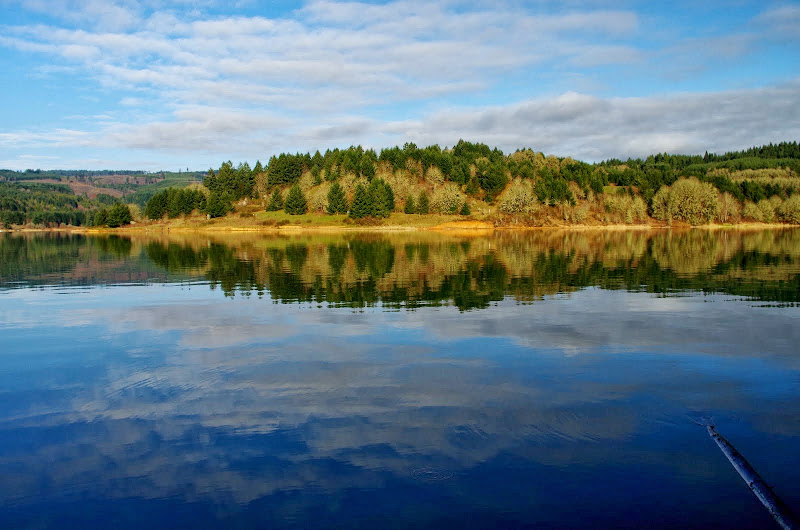 After a while in the trees, the trail breaks into the open to traverse several large, expansive meadows than run down to the lake. 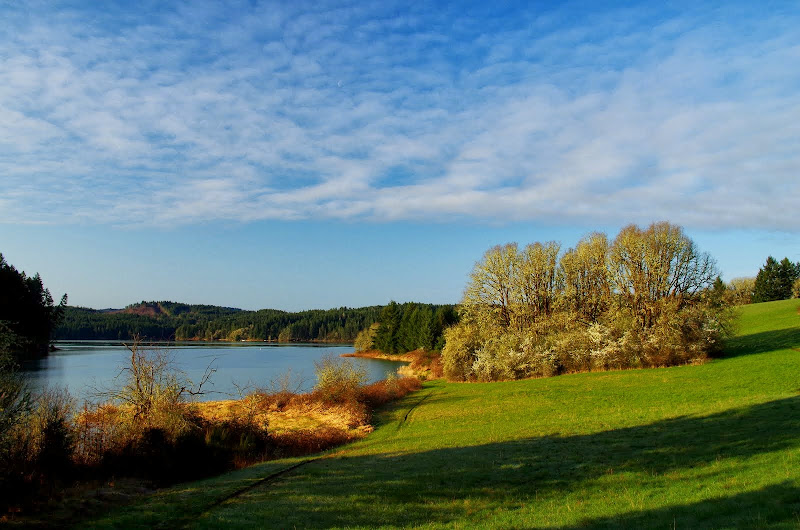 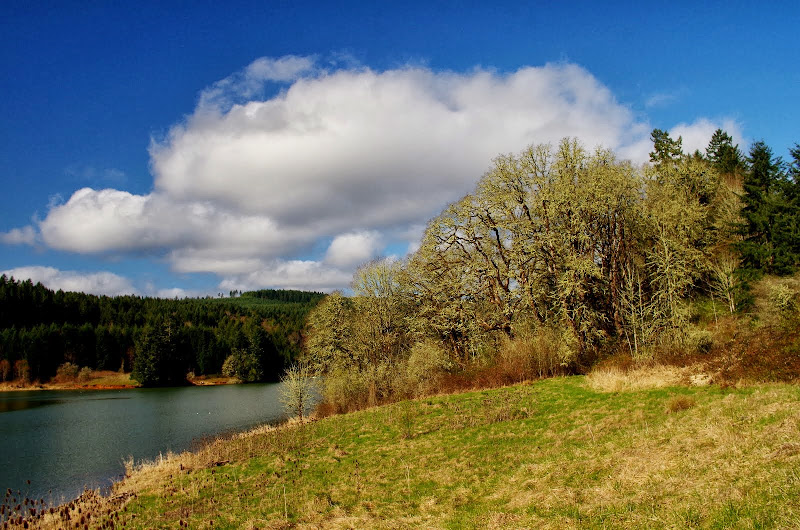 This view reminds me of Ireland for some reason. 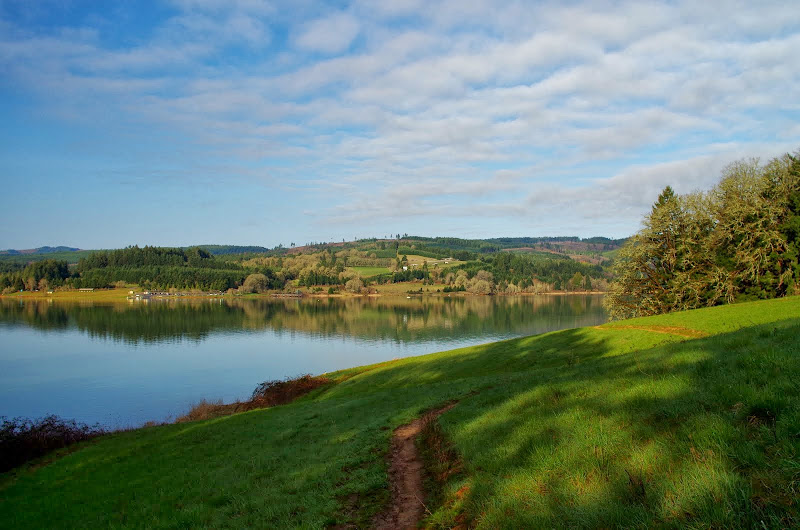 Supposedly the trail can get amazingly muddy in spots but today I encountered only a few such spots, all of which were small enough to walk around or step gingerly through. In the summer, mud isn't even an issue. 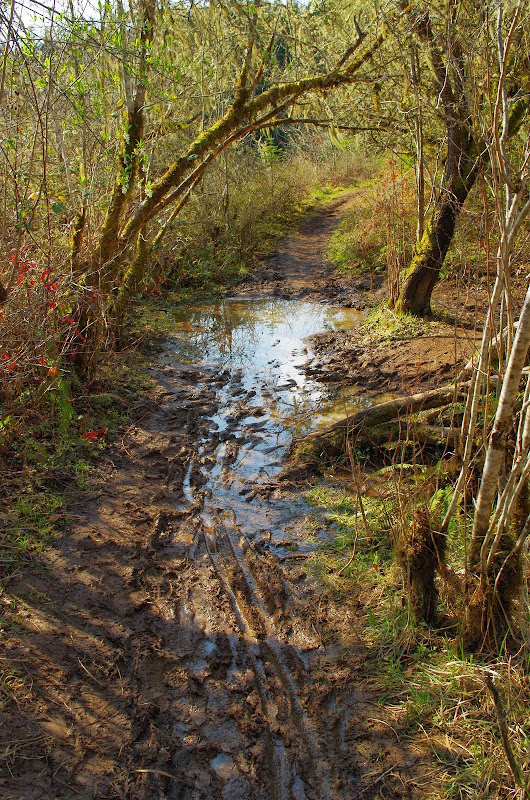 It was a pretty leisurely hike, so there was time for a few "art" shots. 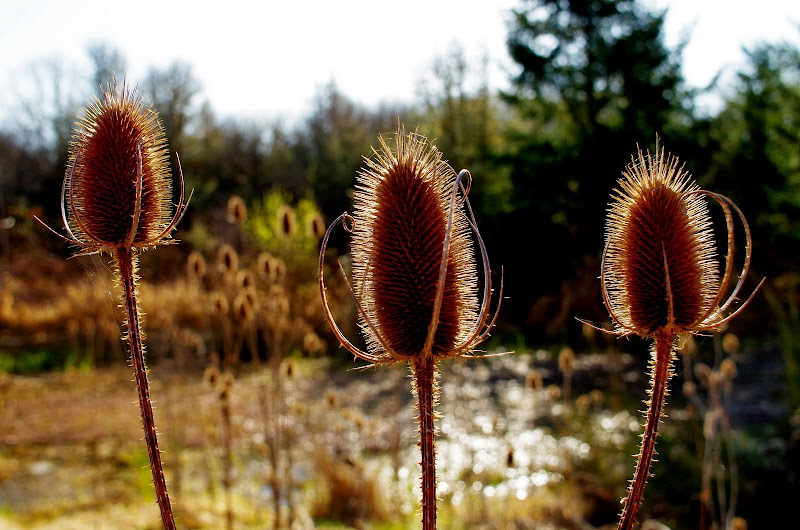 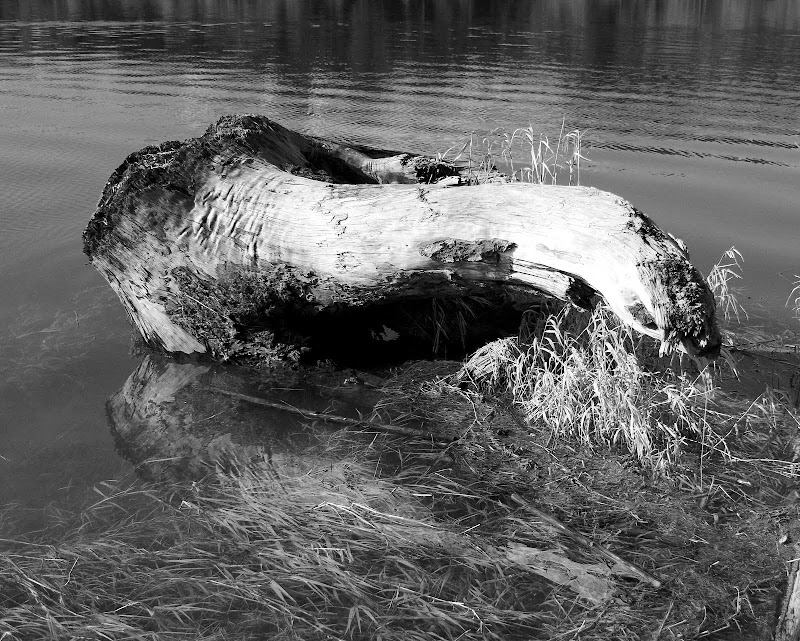 The loop trail runs mostly between the lake and the loop road (Scoggins Valley Rd), but the road and the trail become one in a few places to get the trail over either tributary creeks or marshy embayments. The road has wide shoulders (for road bikes) so walking on it with traffic (of which there wasn't much today) is not nerve-wracking. 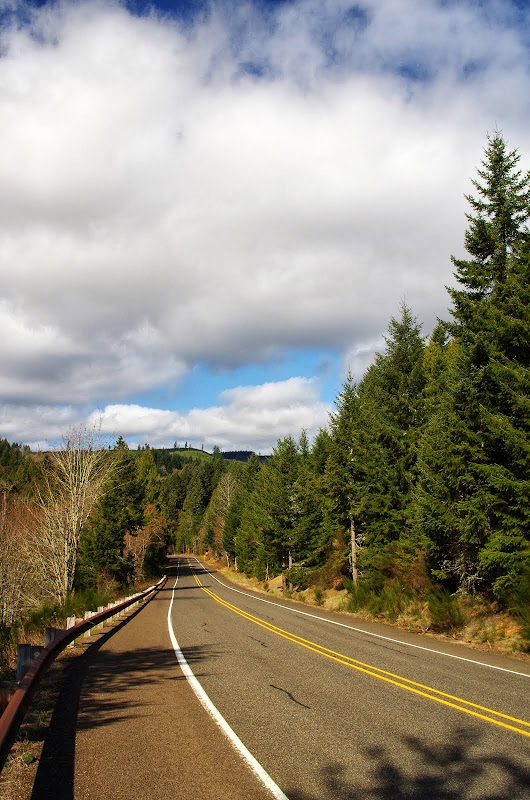 The first road passage took me across a marshy area to the head of the lake, glistening in the sun. It was full sun all day, but not overly warm - nearly ideal hiking weather. 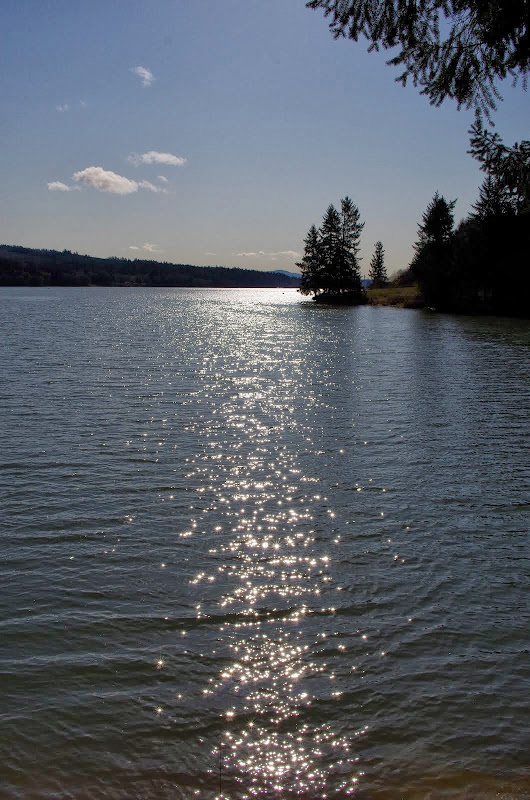 Then the road was used again to cross Scoggins Ck. 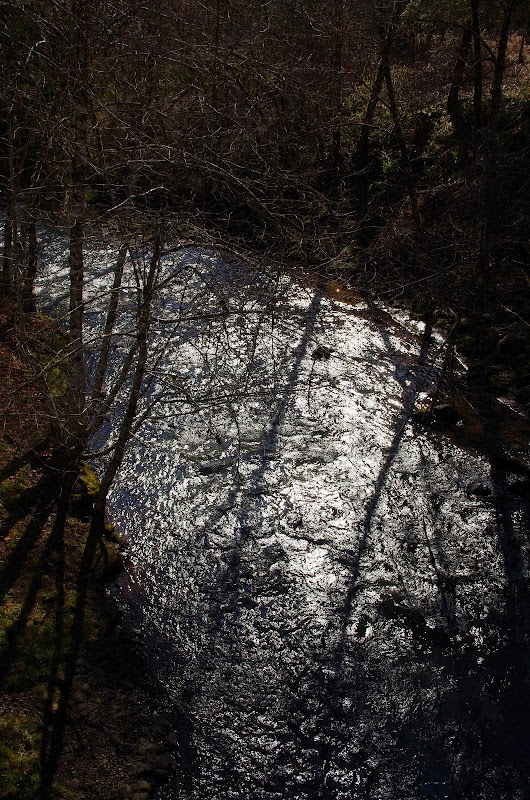 After that the trail heads S toward the large picnic and boat ramp area on the lake's W side. Here the trail is a paved walk-way and I can see how maneuvering through here on a crowded summer weekend day could take some of the "wilderness experience" out of this hike. 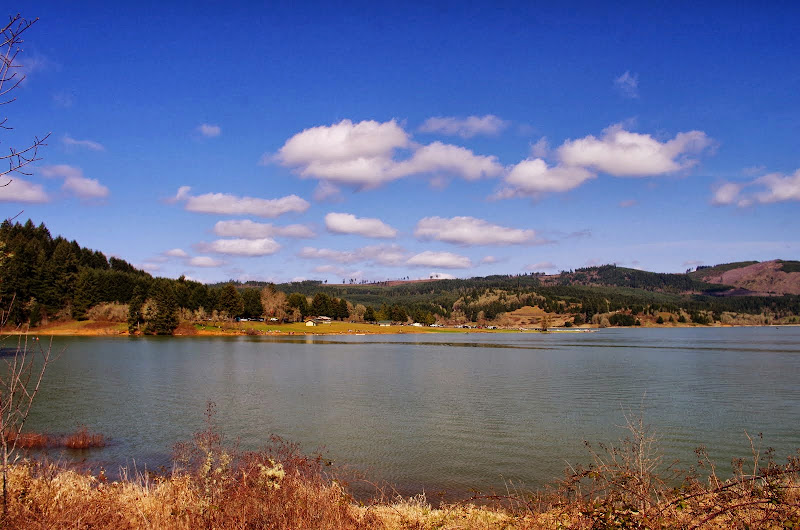 The trail continues S as dirt after the picnic area but relies on the road for the second to the last time to get lifted over Sain Ck. 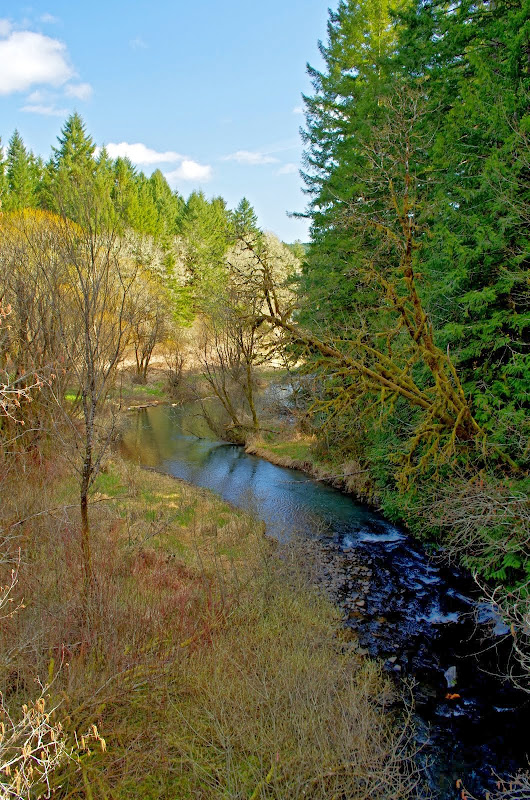 After that, it's up and down through the forest (and across a few meadows), 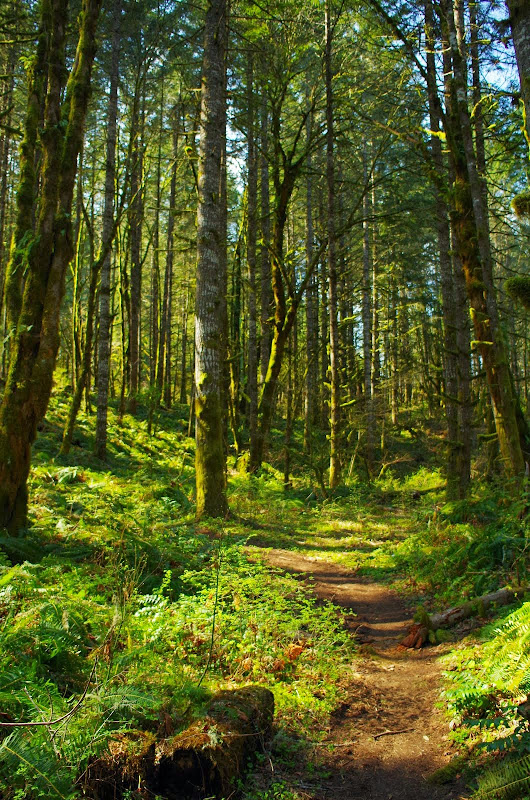 over some deep gullies on handy bridges, 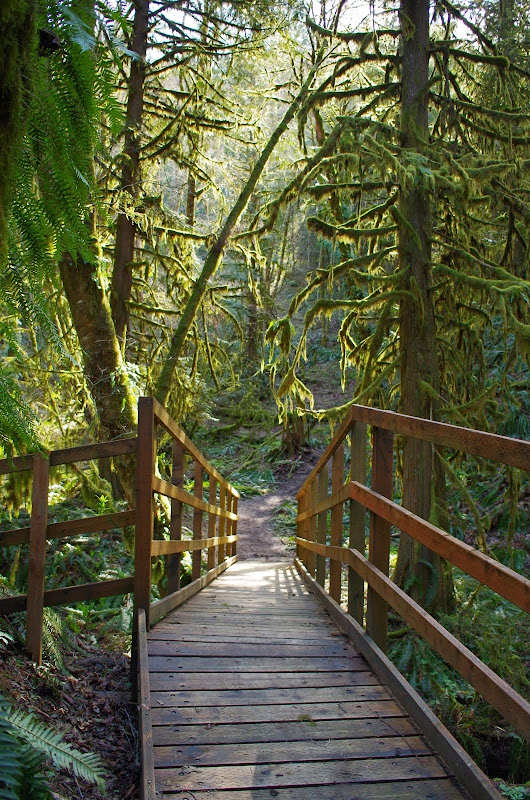 and across Scoggins Dam, 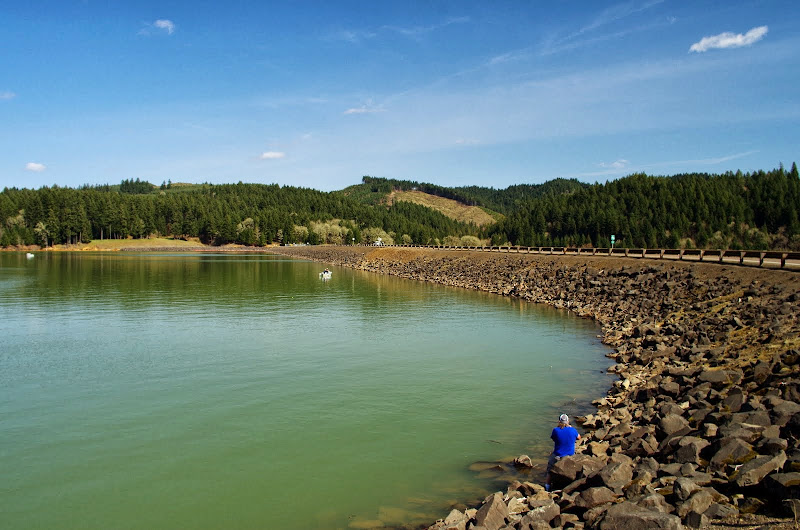 on a half-mile of dirt next to the road but behind the barrier. 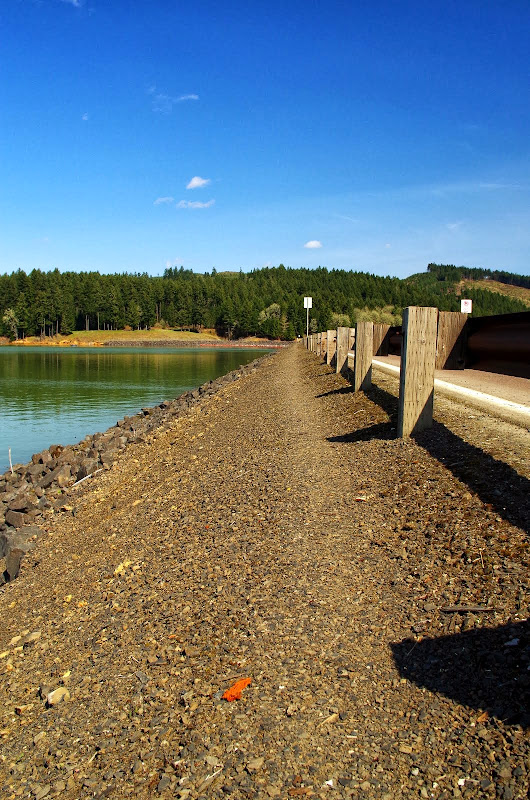 After one last big view of the lake from atop the dam, 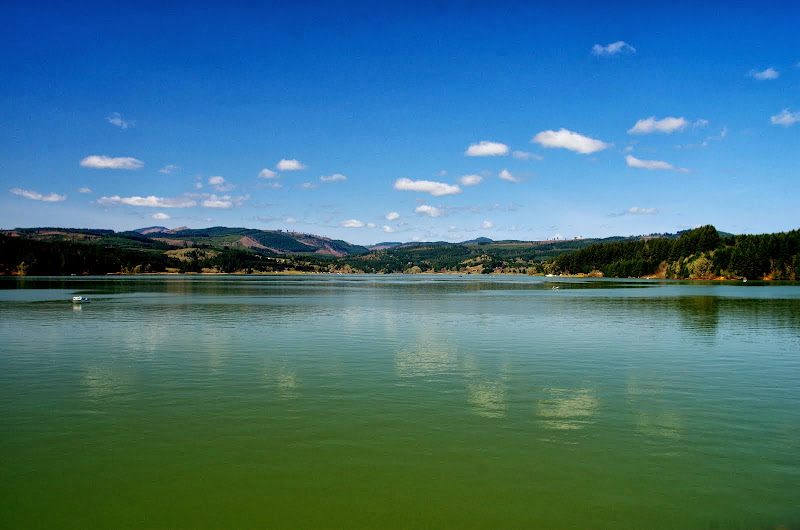 I found the obvious, but unsigned, trail just past the fencing for the spillway and took it N back to the parking lot. All in all, 13.5 mi RT, with no appreciable EG. I saw quite a few people fishing from shore around the lake and playing in the picnic areas, but no other hikers, and only 3 mtn bikers on the trail itself. It might be more crowded and less interesting in the summer months, but today it was great. 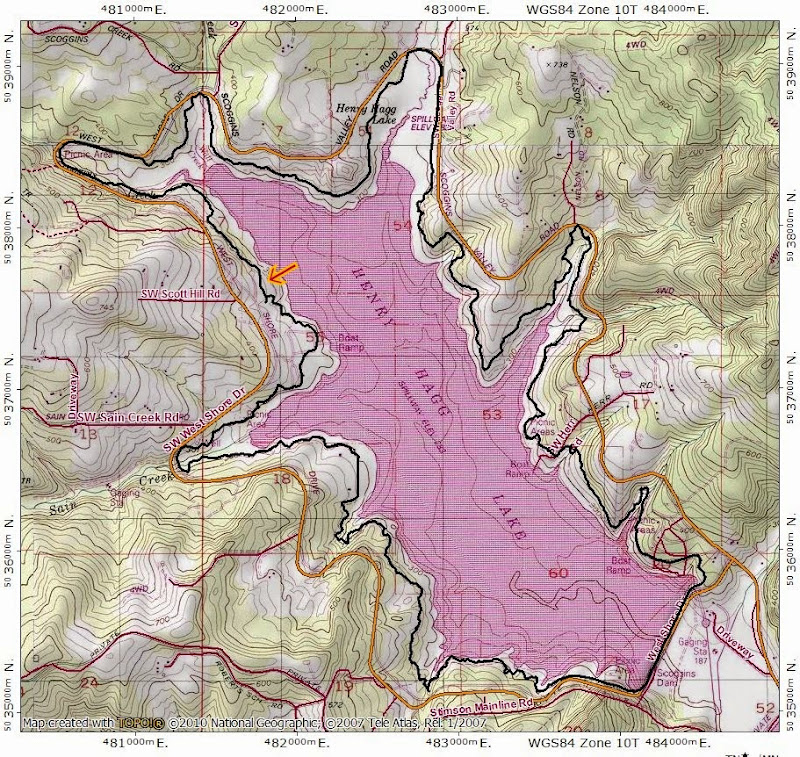 The arrow shows were some new trail is under construction - it will by-pass a highly eroded section of trail that is also too close to the lake.
Last edited by VanMarmot on March 24th, 2014, 10:45 am, edited 1 time in total.
Top

So, you didn't find my hubcap out there? It flew off my van driving out after one of our son's Eagle Scout project days. We always enjoy our time at Hagg Lake. Thanks for the lovely photos and report.
Ann
The mountains are calling and I must go.
John Muir
Top

Thanks for sharing Bruce. I did that loop eons ago and you pictures reminded me of how pleasant it is.
Some people are really fit at eighty; thankfully I still have many years to get into shape…
Top

rainrunner wrote:So, you didn't find my hubcap out there? It flew off my van driving out after one of our son's Eagle Scout project days. We always enjoy our time at Hagg Lake. Thanks for the lovely photos and report.
Ann

No hub caps were spotted, but I did see the small Eagle Scout plaques marking the trails you've worked on. This part of the loop seems to get more mtn bike use than the W side, so thanks for helping keep these E side trails functioning. Your next project can be trash bins at spots where the loop trail easily connects to the road - as the amount of trash at these points was impressive at times.
Top

Great trip report, VanMarmot. This one has been on our 'to-do' list for a couple years now but I, too, was turned off by the mud slog I had heard about, as well as all the bikers. Nothing against bikers but whenever we have to share the trail with them, the majority seem oblivious to hikers (as evidenced by me nearly getting clipped by one last week on the Lacamas Heritage Trail because he was flying through a very narrow area). But the idea of rather large mileage (for us!) on an easy and pretty trail like this one certainly has its appeal. Thanks for sharing.
'We travel not to escape life but for life to not escape us.'
-Unknown
Top
Post Reply
5 posts • Page 1 of 1