A bluebird day of this quality was not going to go unhiked – I just needed someplace new to explore. Afoot & Afield is one of the few local guides that discusses Mowich Butte and two of the old trails that lead to it: Snag Creek and Sedum Ridge. I’d done the Sedum Ridge trail in 2010 – after taking two tries to find its start (Sedum Ridge 2010) and Mowich Butte a few times – once as part of a large loop (Mowich Loop 2011). But I had yet to try the Snag Creek trail, as described recently by bobcat (Snag Ck 2011) and earlier by Pablo (Snag Ck 2008). The TH is where the PCT crosses CG2070 in the hills behind Skamania Lodge. From there, in brilliant sunshine, I headed S on the PCT 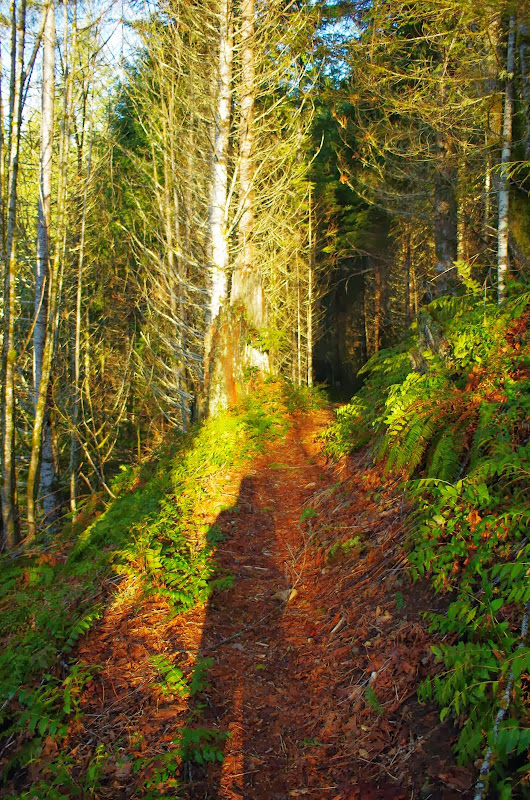 for a challenging crossing (the footbridge is missing) of Snag Creek. 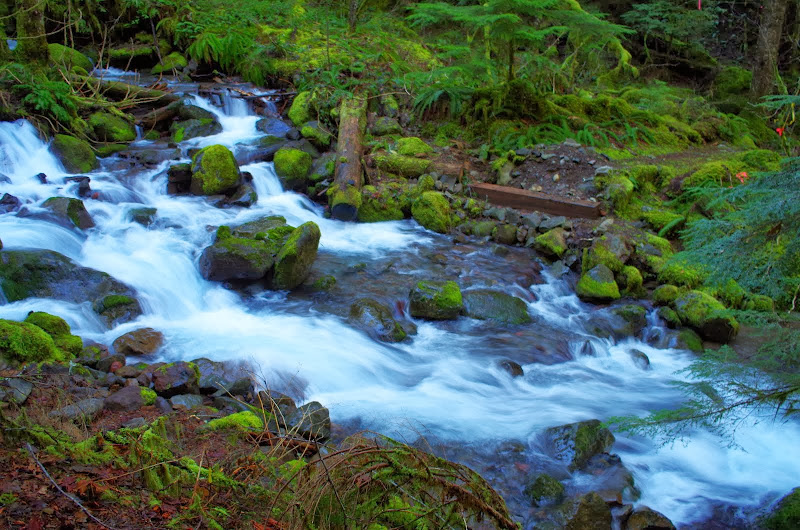 Shortly after working my way across the creek on some logs upstream, I came to the well-signed start of the Snag Creek Trail. 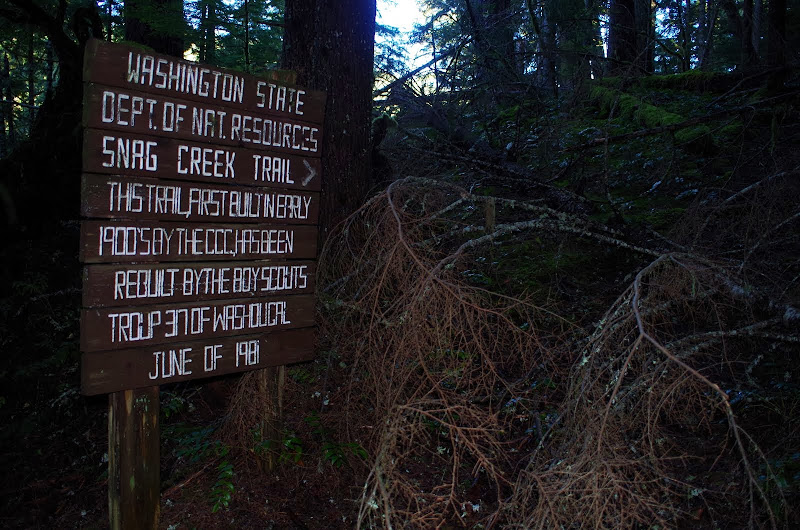 From there the trail heads N and quickly comes to what Afoot & Afield describes as a "washed-out jeep road" - only now its a full service logging road. 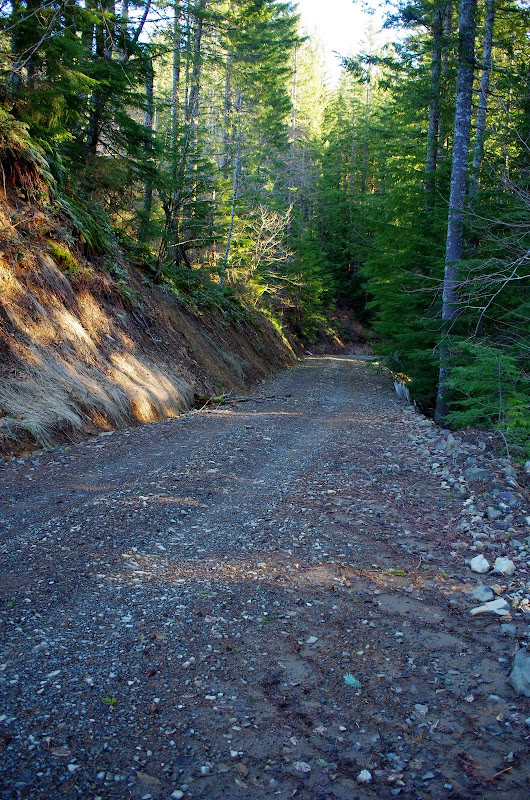 A short distance up the road, I came to some old signless sign posts (arrow) which indicate the continuation of the trail. 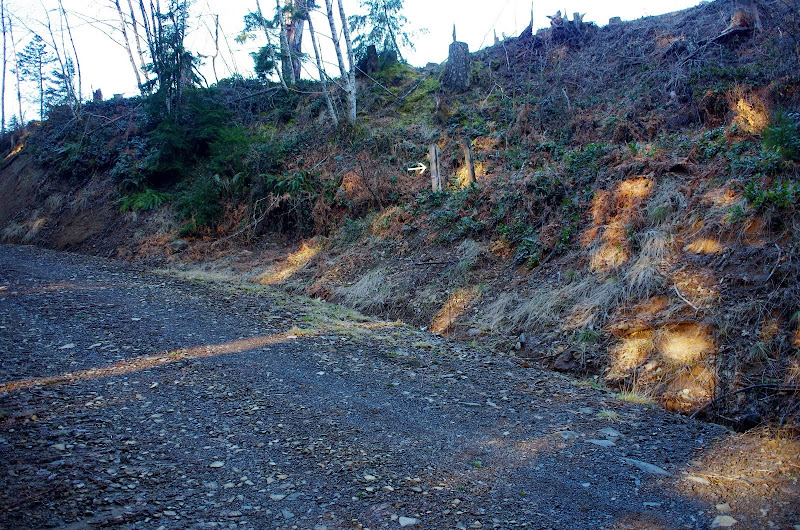 Another short hike and I was in the middle of a clear cut, trying to pick out any remnants of the trail. 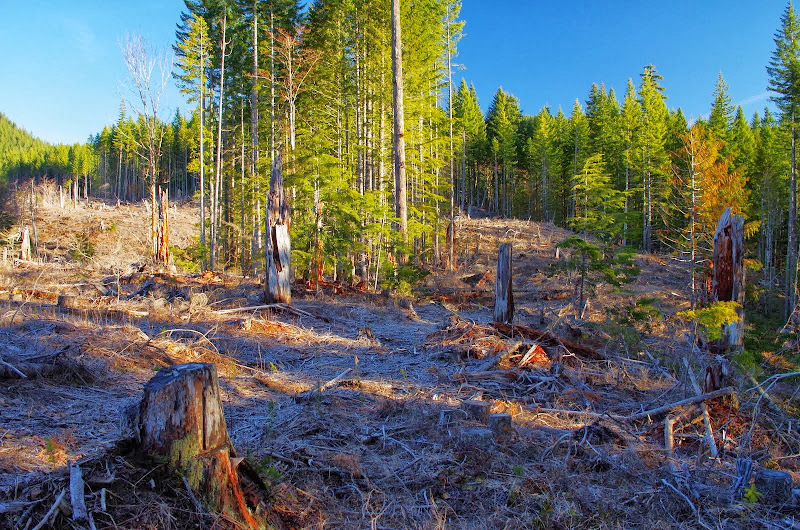 The trail had originally gone along the ridge, so I drifted right and up and in about a quarter mile, came across it again. There's a little white tag (yellow arrow) and a cut log (white arrow) that indicate where the trail restarts. 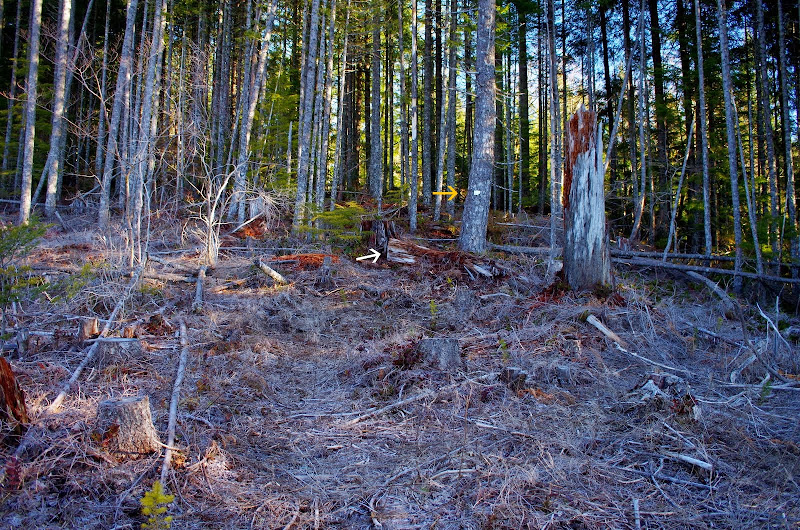 After that, the trail was in pretty good shape up to about 2700', where there used to be some wooden benches from which to enjoy a view of Mt. Hood and some high points in the Gorge. Sad to say, the benches are now toast. 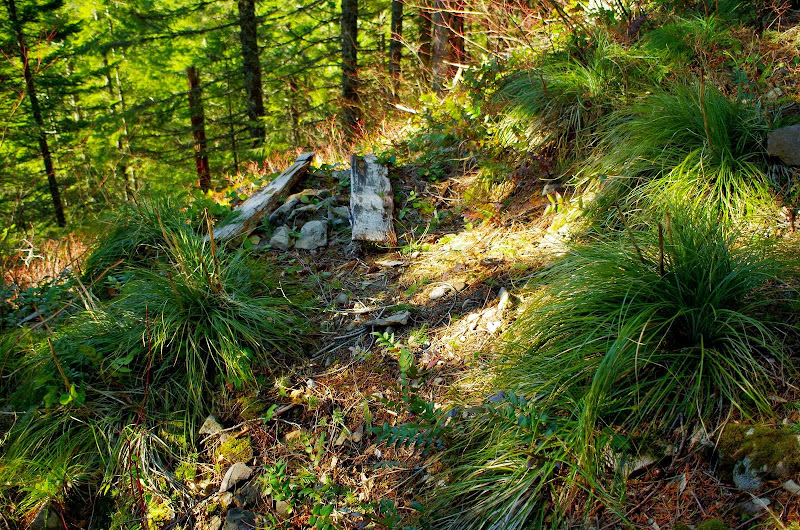 A little further on, I came to the "sign that faces the wrong way" and the end of any kind of a maintained trail. 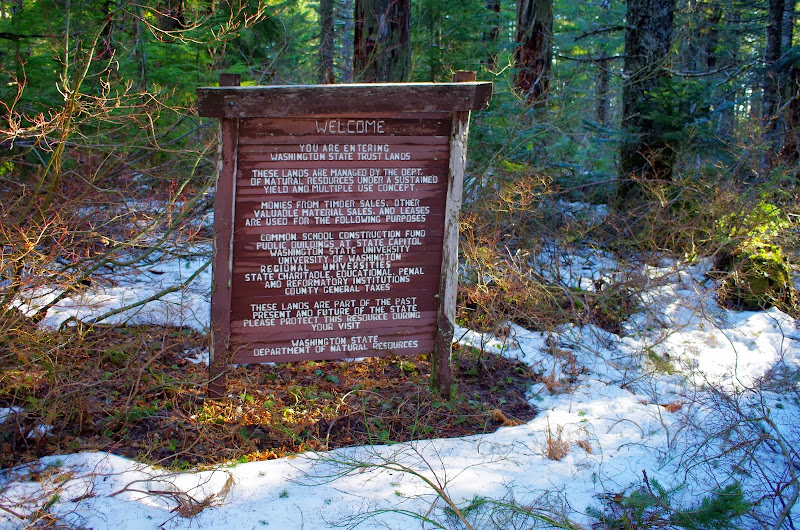 Afoot & Afield suggests you turn around at this point due to the lack of a trail, but it's not too hard to continue N up the low angle ridge toward Road 41. Where the sun had reached the snow, it was solid and easy to walk on - inside the trees it was softer and undercut by brush, so there was more post-holing. I'd thought about bringing snowshoes but was glad I hadn't - there wasn't enough troublesome snow to justify the extra weight. 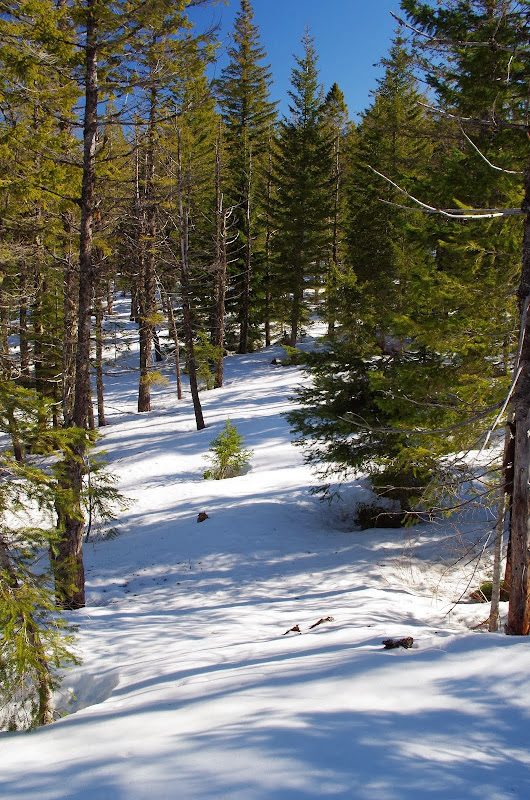 Snow or not, Road 41 is impossible to miss since it cuts across your route along or near the top of the main ridge. I reached it in the general vicinity of Mowich Campground - under about 2-3' of snow. 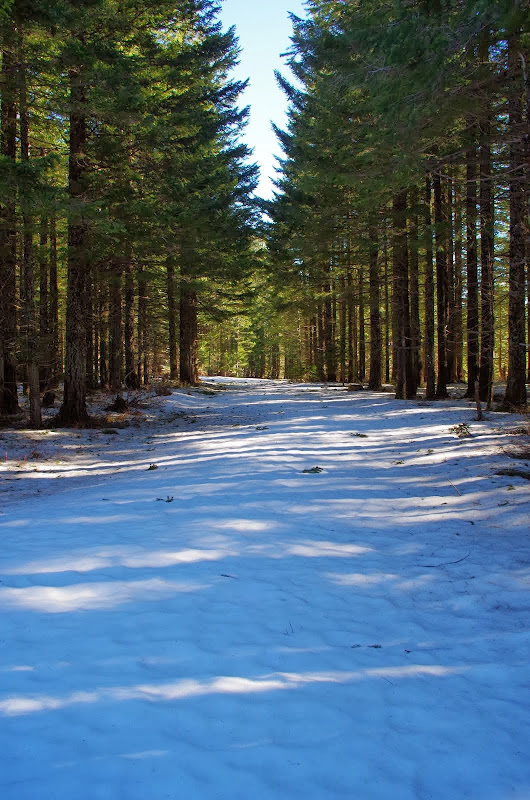 I went E on Road 41 to where it's blocked by a berm and a wash-out and then went up the ridge from there directly to the top of Mowich Butte. 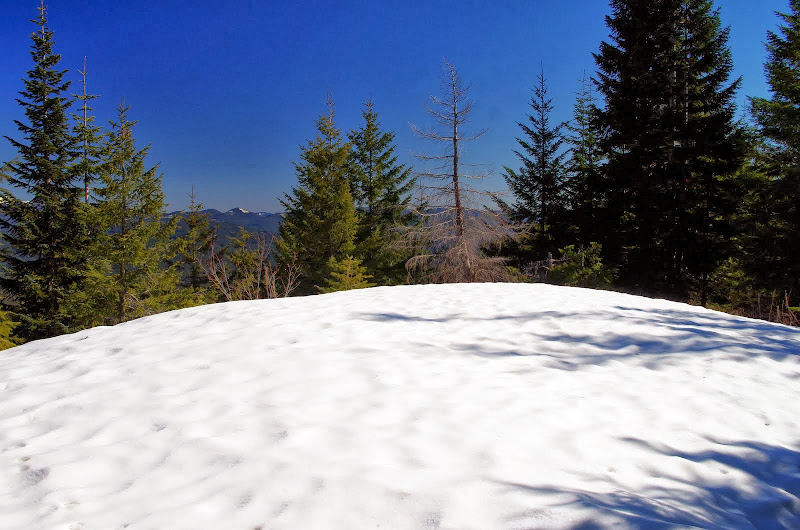 There was a L4 lookout on Mowich from 1937 until the 1960's and since then a lot of the trees have grown-up and obscured the views. But on a totally clear and sunny day like today, I could see Rainier through the trees, 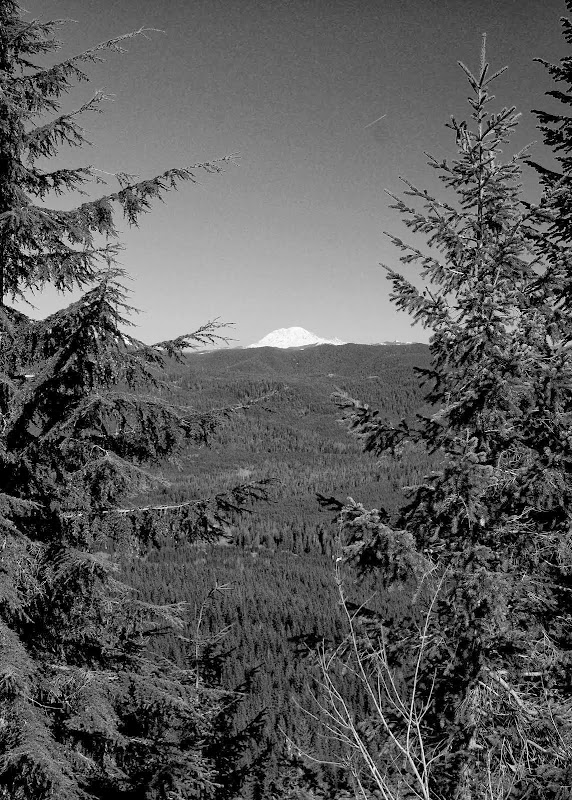 After lunch, I followed the old lookout service road down to Road 41 and took that E to a point where it's only about 25' above the PCT. Above 2800', there was some snow on the PCT but never enough to obscure it or make walking particularly difficult. 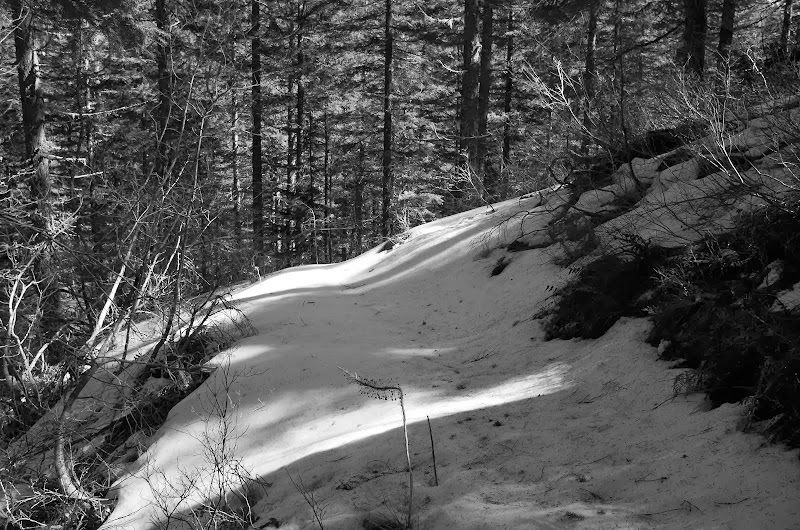 There are a couple of waterfalls tucked back along the North Fork Rock Creek drainage and both were roaring. 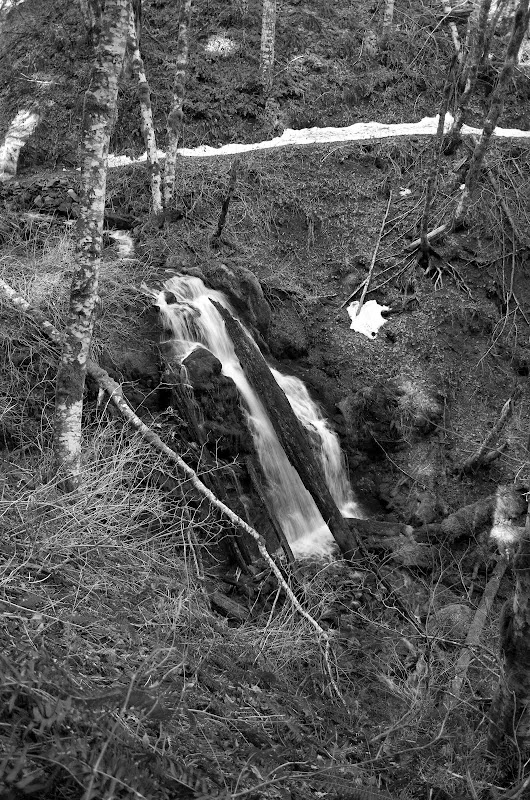 The PCT is a superhighway compared to working through brush and snow and I was back at the TH in almost no time. It would have been possible to make a wider loop and descend via the Sedum Ridge trail but that would have meant walking the road back up to my car. Maybe another day. Both of these trails (Snag, Sedum) offer various loop opportunities to and from Mowich Butte but both receive little, if any, maintenance and are slowly falling into disrepair - with vegetation and blow downs intruding further and further on to them every year. Some volunteers try to keep them open but that may not be enough in the long run. Might be good to get out and enjoy them while you still can? 8.5 mi RT, 1900' EG. 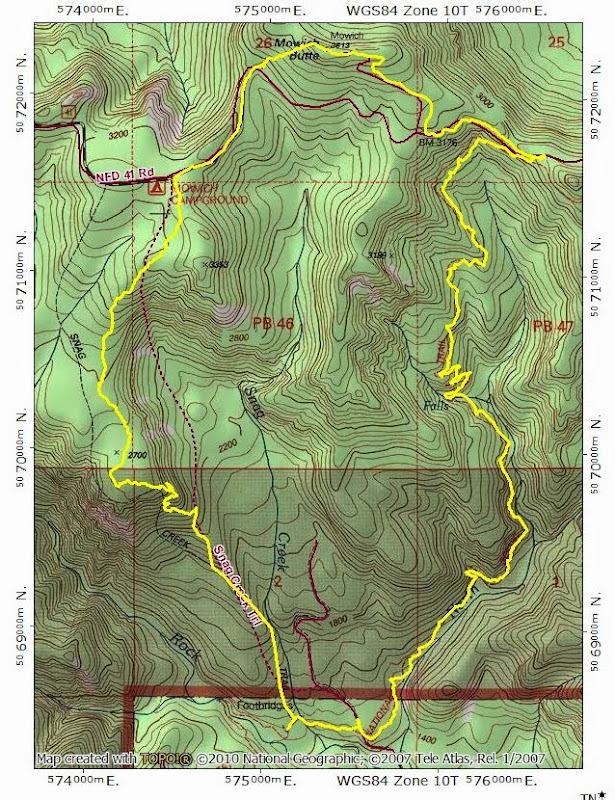 Nice report, thx, too bad about the clearcut, a seldom used trail like this and DNR funding woes does not bode well for rehabilitation - I hope I'm wrong. I wonder what WTA and Ryan O have to say about it, I should ask.

Great that you did this loop. DNR gave up on the Snag Creek Trail a long time ago, but allowed the Boy Scouts to refurbish it at the beginning of the '80s. The USFS gave up on their section decades before that although (when there isn't snow) you can still trace the route (here and there) via sawed off logs up to the road.

Your photo of the Snag Creek crossing shows some indication that the bridge may be restored. It's a slippery, tricky crossing even in late summer, which is why the PCT advises a road detour to avoid it.
Top

bobcat wrote:Your photo of the Snag Creek crossing shows some indication that the bridge may be restored. It's a slippery, tricky crossing even in late summer, which is why the PCT advises a road detour to avoid it.

That "old jeep road" that is now a full-on logging road is actually an extension of CG 2070 - which crosses Snag Creek with a logging truck capable bridge. So you could (sadly) just hike up the road to the clearcut - bypassing the PCT & its Snag Creek crossing entirely - and pickup the trail from there. I'm not sure that qualifies as "progress."
Top

Thanks VanMarmot for this TR. I have been up this way 4 or 5 times in the past couple of months bushwhacking to a lot of the waterfalls in this area. I was planning on going up the Sedum Ridge Trail and coming down the Snag Creek Trail after the snow melts. Something I thought interesting is that right in the center of the loop you did, is the largest waterfall I have so far seen in the Rock Creek Watershed. Snag Creek Falls...I was up there back in January http://www.portlandhikers.org/forum/vie ... 10&t=18094. Too bad there isn't a side trail. Really neat and unappreciated area...thanks again for posting