Allison (awildman) and I worked off (some of) the holiday treats with a quick run up Defiance the day after Christmas. Left the trailhead about 8:15, and were on top (a sluggish) 4 hours later at 12:15. Had a really nice break along the way at hard-frozen Warren Lake, enjoying wandering around its opaque surface.

This was, it was occasionally mentioned, my idea for a destination. I'd done this loop about a year ago for the first time, and really wanted to use it to again gauge whether I'd done much to improve my fitness level. I think I can say, "a little." Not quite there yet, but better. It's still a butt-kicker. It was Allison's first time doing the entire loop, and I don't think it phased her in the least.

The drive out wasn't bad at all, despite warnings of freezing fog. Only a few bridges were whitened. But pulling into Starvation Creek, the offramp was extremely slick, and we could slide around in the parking lot in our trail runners. Temp was right around freezing, which was quickly forgotten as we started the near immediate ascent up the Starvation cut-off. It's really weird; I know, I have measured(!), this route is not as steep as Mount St. Helens. But it sure as heck seems moreso. Must be the trees?

Anyway, as we climbed, the day just kept getting warmer and more pleasant. Despite considerable ice, and a bit of snow, for the last 1000' or so, the summit was simply glorious. We each chose a "lizard rock" to bask upon, and enjoyed lunch with an incredible view of Mount Hood. I even got a bit of a sunburn!

Several thermometers (reality check!) registered a balmy 71°F during this, the very last week of the year. It was hard leaving after 45 minutes, but we each had dinner dates in town and had to face the plunge back down the Defiance Trail. We were back at the jeep about 3 hours later, and heading home as the last rays of the day were on top of Dog.

A few favorite photos from the day... 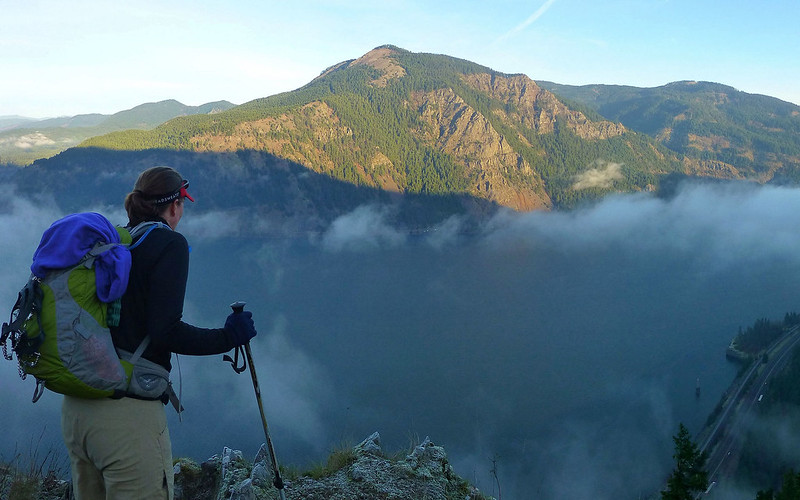 Peering over a frozen cliff, 1200' down to where we'd started just over a mile ago. Dog Mountain in the sun across the gorge. 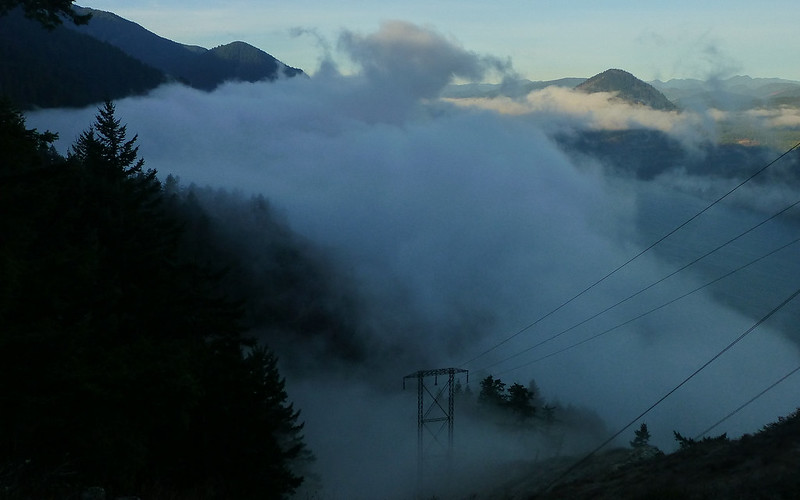 Thin layer of fog/clouds swirling about through the gorge, which we quickly climbed through to enjoy from above. 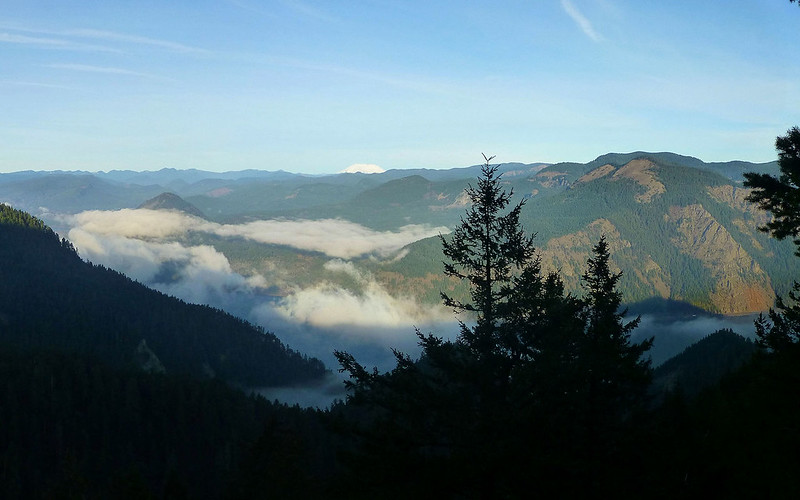 By the time we'd hit 2400', the volcanoes started popping out, and all signs were this was going to be a glorious day above the clouds. 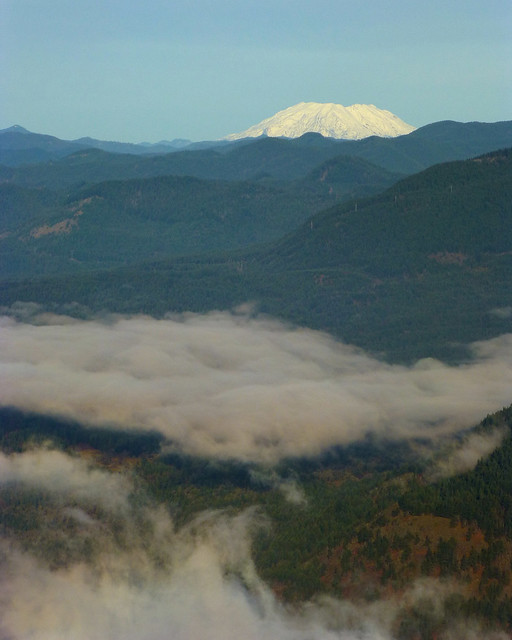 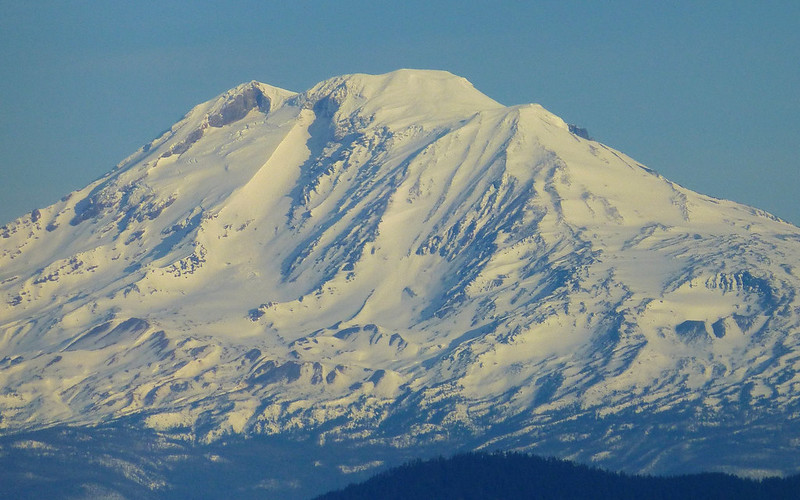 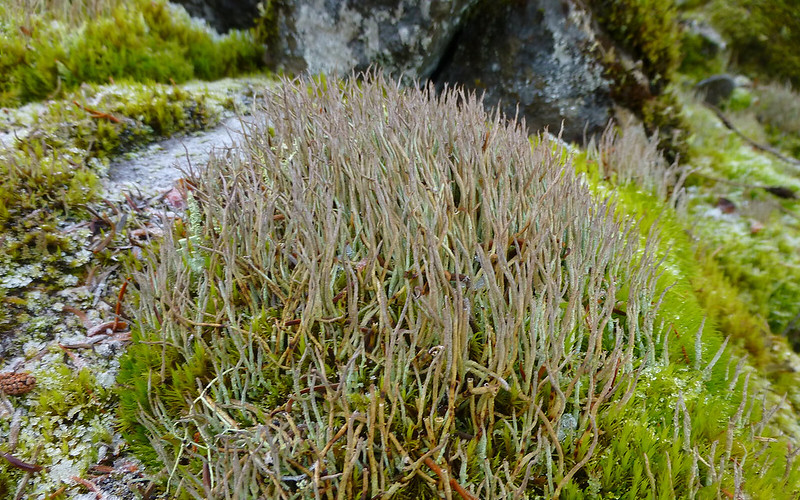 Some sort of hairy lichen in the mossy talus field at 3200'? Or does moss do this? Never seen it before. Note that it's still icy ground. 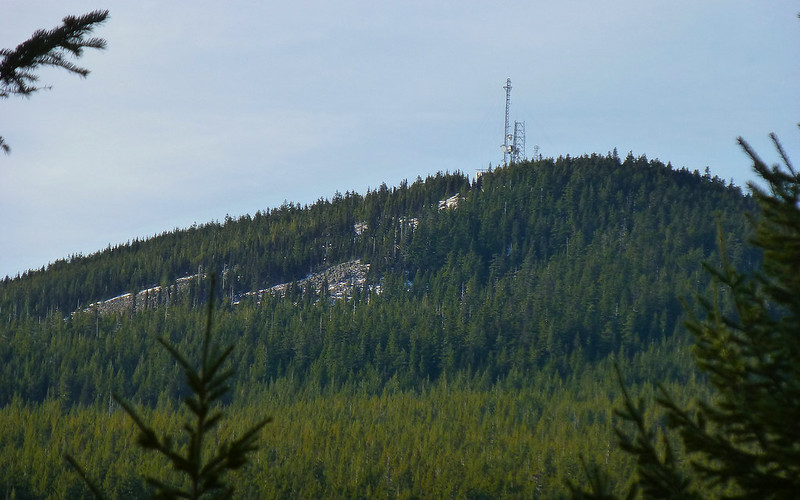 Our only view of the summit hinted at a bit of ice/snow up above, but it sure didn't look like much! 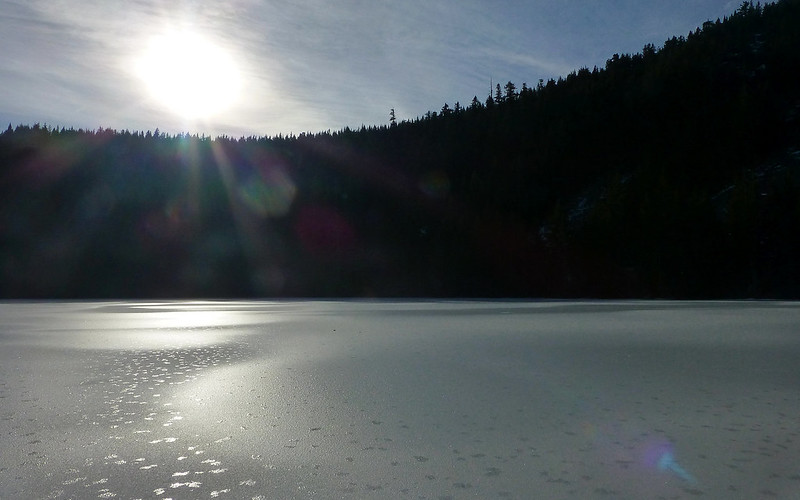 Warren Lake was just beautiful, with the low solstice sun bouncing off it. 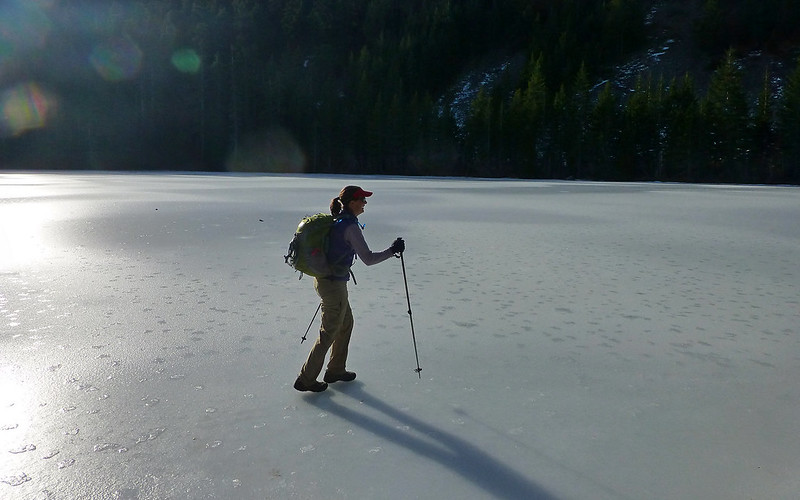 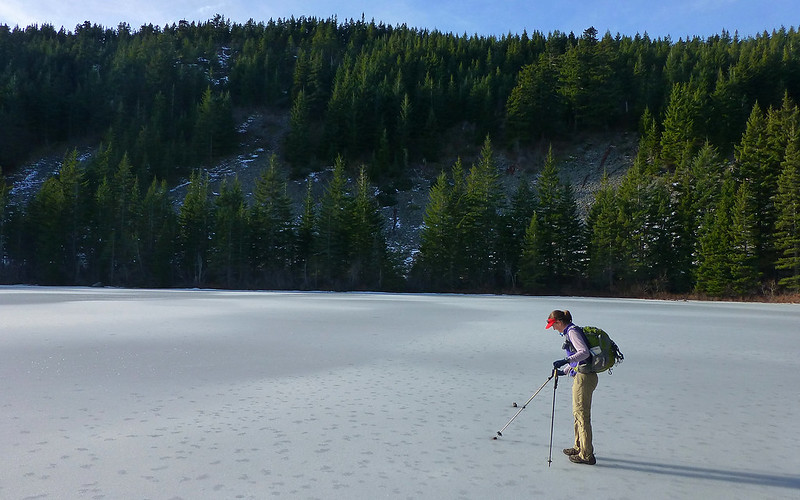 We probably killed 20-30 minutes just exploring the lake and its shores.

9-shot (111°) panorama showing the view to the north. I recalled a thread where it was suggested there were "no views" on this hike!

So that's where the snow is! MSH and the Mt. Margaret backcountry looks particularly white. 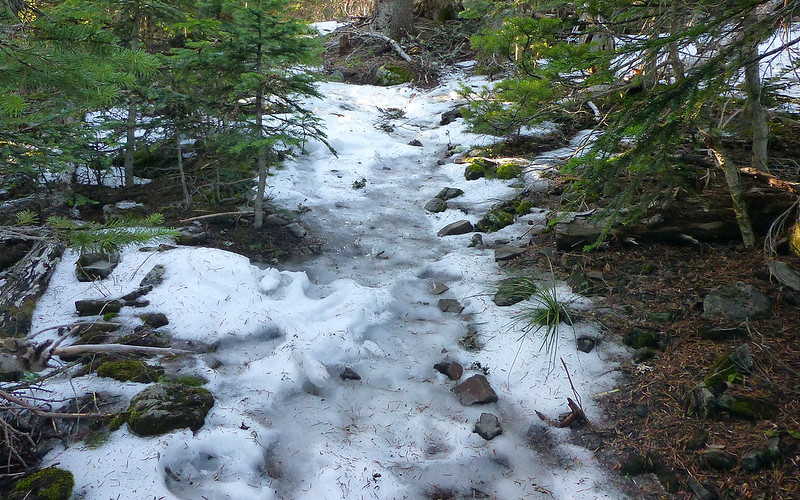 We rock-hopped for 1/4 mile or so, before strapping on the microspikes which made easy work of the final ascent. 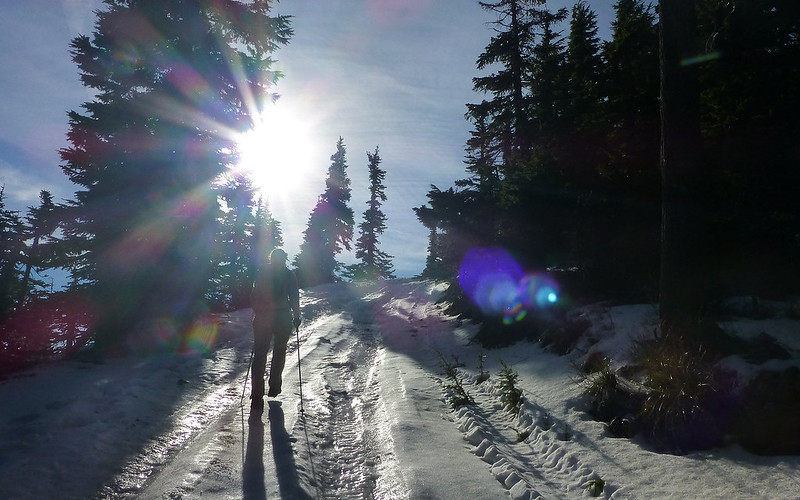 The last couple hundred yards, on the road to the summit, were glaze ice! 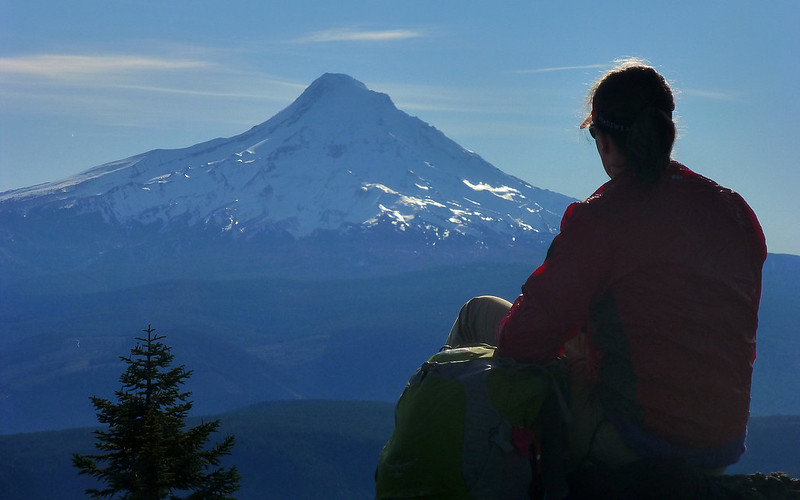 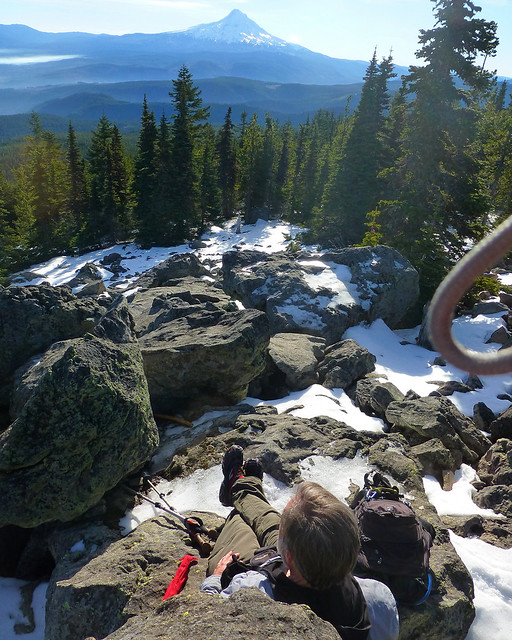 I took the next boulder down, using hers as a backrest. Sandwiches, apples, and Christmas cookies ensued. 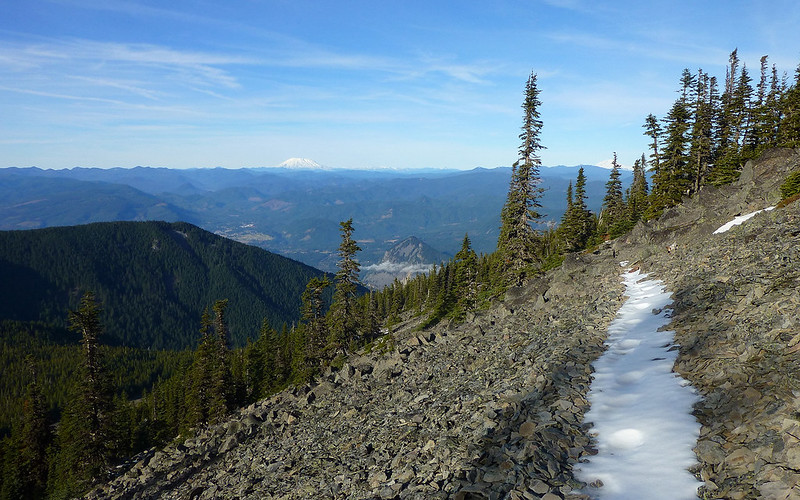 On descent, we did the summit wraparound, to take in the northern views. So little snow! 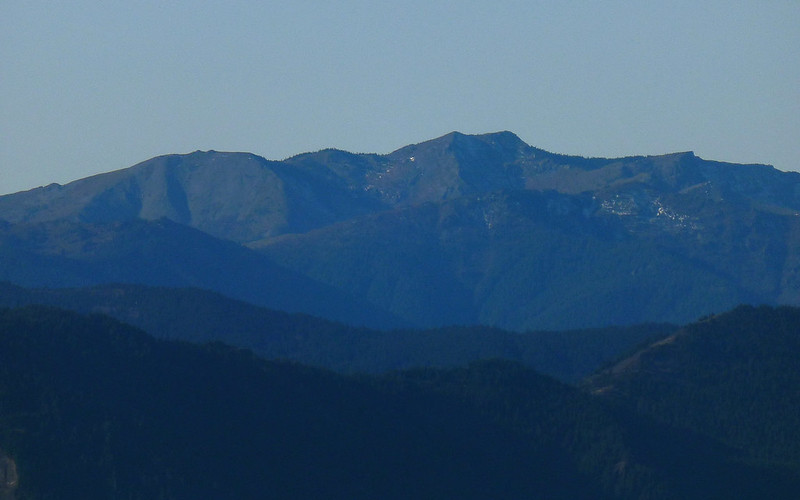 Silver Star is nearly bare-nekkid! Hardly a shred of snow! 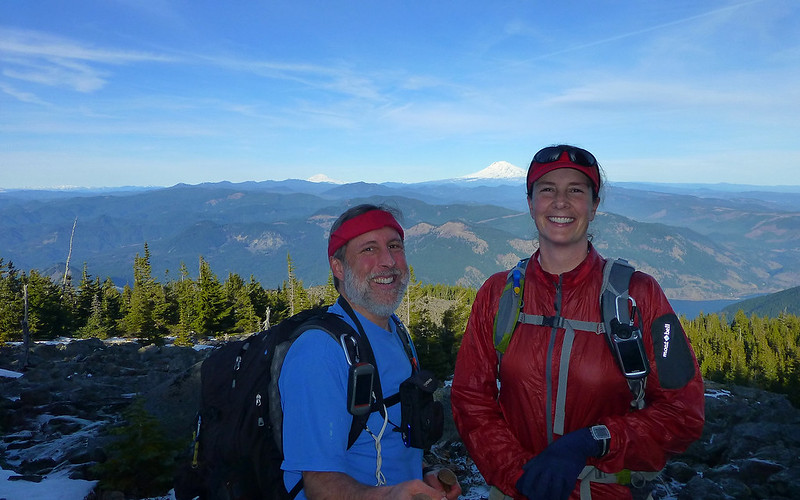 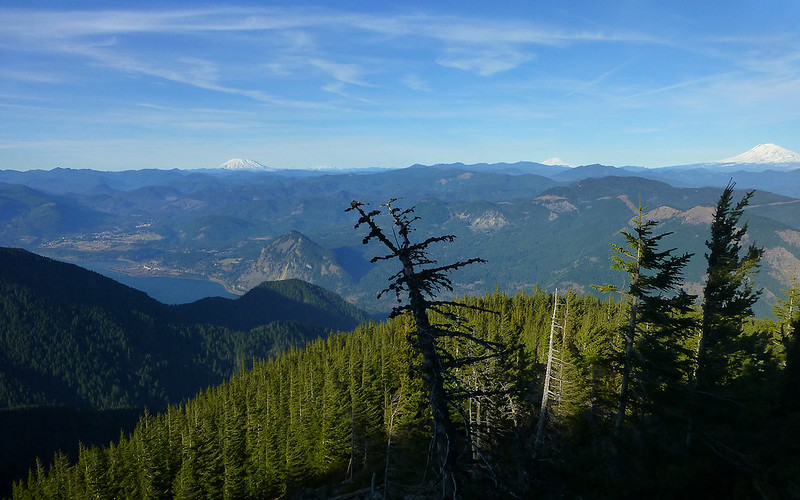 One more three-volcano view, just for the heck of it. 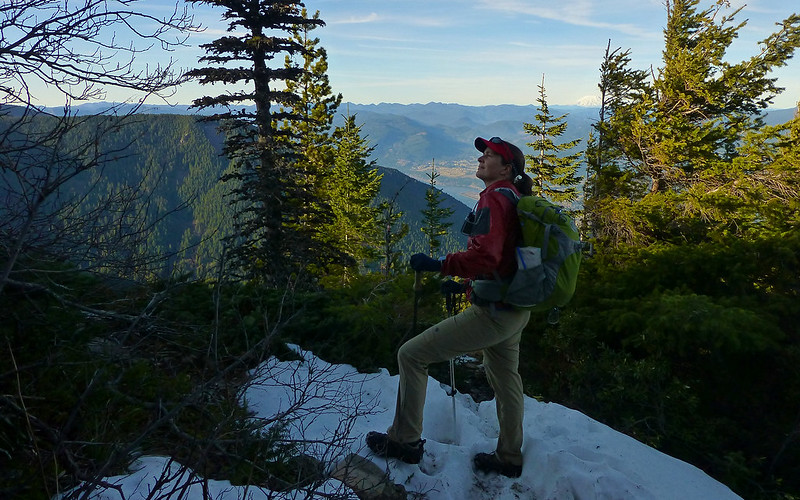 Striking something of a Lewis & Clark "explorer" pose, contemplating the cliffs above. 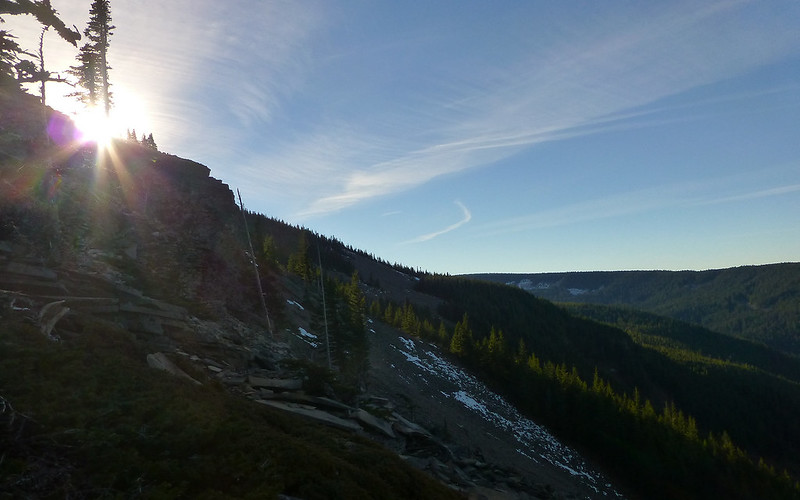 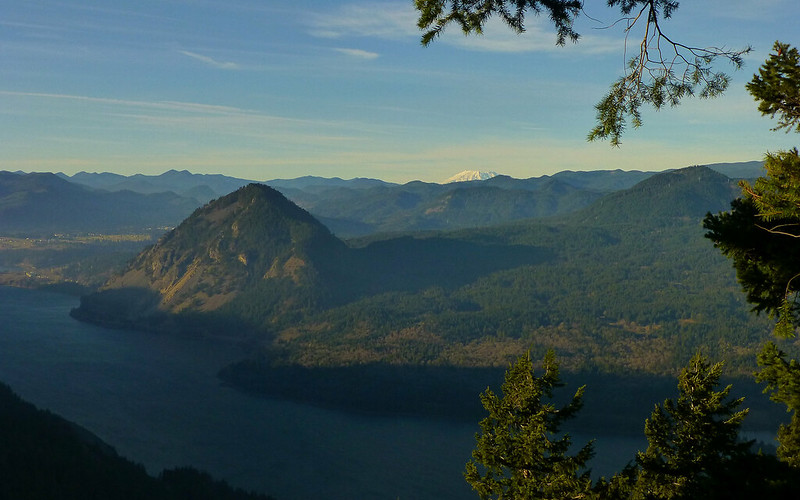 At 2:50, the low sun was already casting long shadows across the gorge. 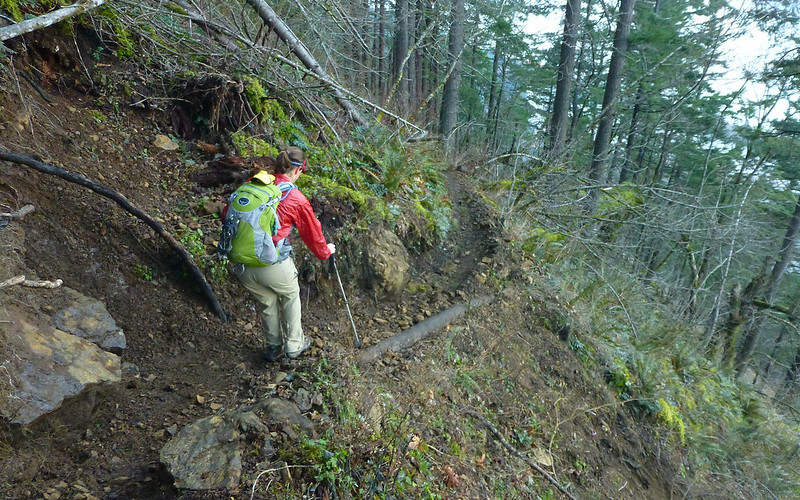 Washout repair by our own mcds is holding up very well! 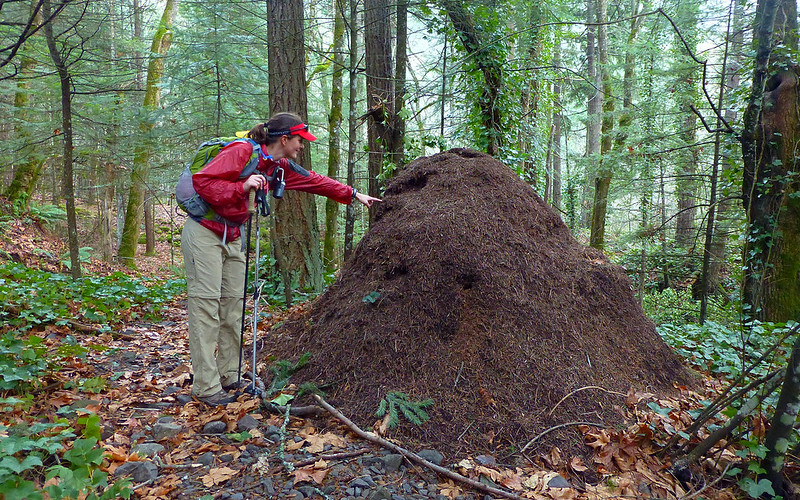 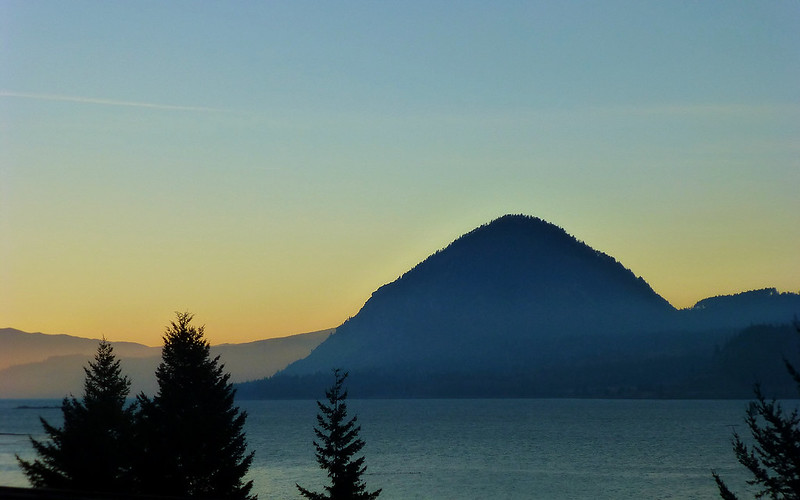 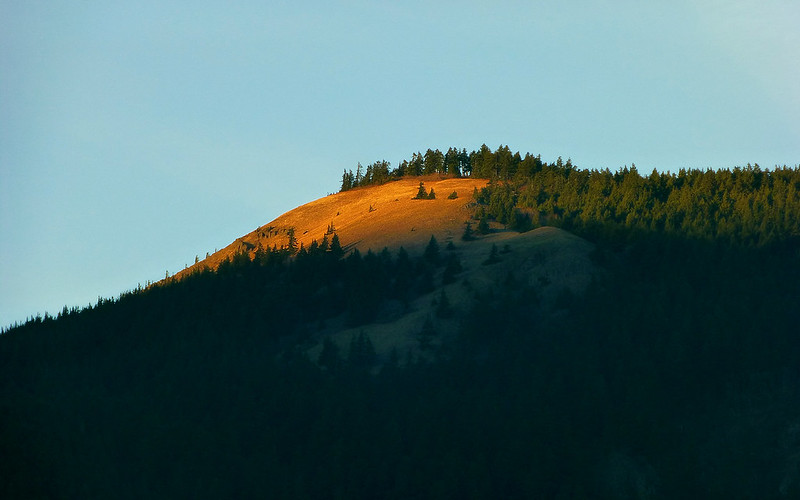 Only the summit meadows on Dog were still catching direct rays!


This was an excellent hike to (most likely) close out 2013 with. More than 24 hours later, yeah, I do still feel it. Which I'd really like to better understand. I've done steeper, longer, more elevation hikes this year that just don't have quite this same impact.

(Don't believe anyone who tells you there's no views on Defiance!)
Karl
Back on the trail, again...
Top

Great photos, Karl! That's one nice hike, I haven't done it for a few years. Looks like a real treat to have (mostly) snow-free trail up there, being almost January.

It is possible to make this hike (well, straight up-n-down on Defiance) and not have any views, with the following directions

romann wrote:Great photos, Karl! That's one nice hike, I haven't done it for a few years. Looks like a real treat to have (mostly) snow-free trail up there, being almost January.

Thanks, Roman! And yeah, I still can't believe the conditions out there right now. I need to find another good one (2? 3?) before they deteriorate back to our normal crud.


romann wrote:It is possible to make this hike (well, straight up-n-down on Defiance) and not have any views, with the following directions

That must be it!

Lizard Rock on summit ............ as lounging hikers on summit of Dog Mt in every position of recline
Top

Awesome in its purest TR Karl!!! Excellente! Beautiful photos too, as always. I would think if a sasquatch like me ventured onto the lake, I'd be ice fishing firsthand.

adamschneider wrote:MSH is only super-steep at the end; Defiance is relentless.

Well, yeah, if "the end" is the last two miles.

Relentless has a ring, though! Good word for it.


raftingdog wrote:Lizard Rock on summit ............ as lounging hikers on summit of Dog Mt in every position of recline

Didn't mention, we only crossed paths with one other group of two all day long. They hit the summit about 20 or 30 minutes after us. We had the primo rocks already.

Awesome in its purest TR Karl!!! Excellente! Beautiful photos too, as always. I would think if a sasquatch like me ventured onto the lake, I'd be ice fishing firsthand.

Thanks, Will! When we first pulled up to the lake, it let out this low, long, rumbling roar. Totally awesome! But we never saw a crack, and it certainly seemed pretty darn solid. I'm not usually one to rush out there, either. Nothing more sickening than that sound of it cracking beneath you. But I had a fearless tester with me to ease that concern.

Thanks, Tim! It was. Totally worth it.

Great report and photos!
“You're off to Great Places! Today is your day! Your mountain is waiting, So... get on your way!” - Dr Seuss
Top
Post Reply
9 posts • Page 1 of 1