The Salmon river trail is one of the closest trails to our home & yet it had been quite some time since I last hiked it, 1986 in fact

We also wanted to check out the old Salmon River Trail and so Chiyoko, Shelly & I started there at the lower trailhead & headed up stream! I wasn't too excited about hiking this section, I just wanted to "tick it off the list"! After all how good can a trail that parallels a road be but in fact it turned out to be a nice surprise. If it's green mossy temperate rain forest you are looking for then I think this section of the Salmon River trail is better than what comes after the main trail head.

There were two minor obstacles along the old Salmon River Trail, the first was a slightly wider than usual creek crossing without a bridge that required either nimble rock hopping or good balance skills if dry feet were desired.

The second was an old growth Doug Fir that seems to have only recently fallen.

We passed through the empty Green Canyon Campground (Kudos to the Forest Service for leaving the Restroom unlocked) & on to the salmon River TH at the Bridge that crosses the River.

After a couple of miles we spotted this decaying picnic table from the trail & went over to have a look. I thought this was a bit odd but learned on reading the field guide (after the hike

) that this was the site of the once more formal Rolling Riffle Camp Ground.

The trail began to climb slowly after Rolling Riffle until about mile 6 (from where we started) when we came to the junction where the main trail heads to the left & a user trail heads to the right around the bluffs with a few more views. We regained the main trail & were thinking about how much further we wanted to go when two runners who had past us earlier came back down the trail. I asked them how far they had been I they told us about the scramble trail down to the view point for Frustration Falls! Cool now we had a destination for the day.

The Scramble trail down to Frustration falls drops about 350' in 2 tenths of a mile & was a bit slippery in places, it just requires the usual level of "off trail" caution! Once at the end you are treated to some spectacular views of the Falls.

After lunch taking in the view we climbed back up to the trail & began the hike out. We passed a few more people heading up the canyon on our way down.

Even more people were hiking the Old Trail segment on our return.

Shelly ended up thinking twice on this photo op 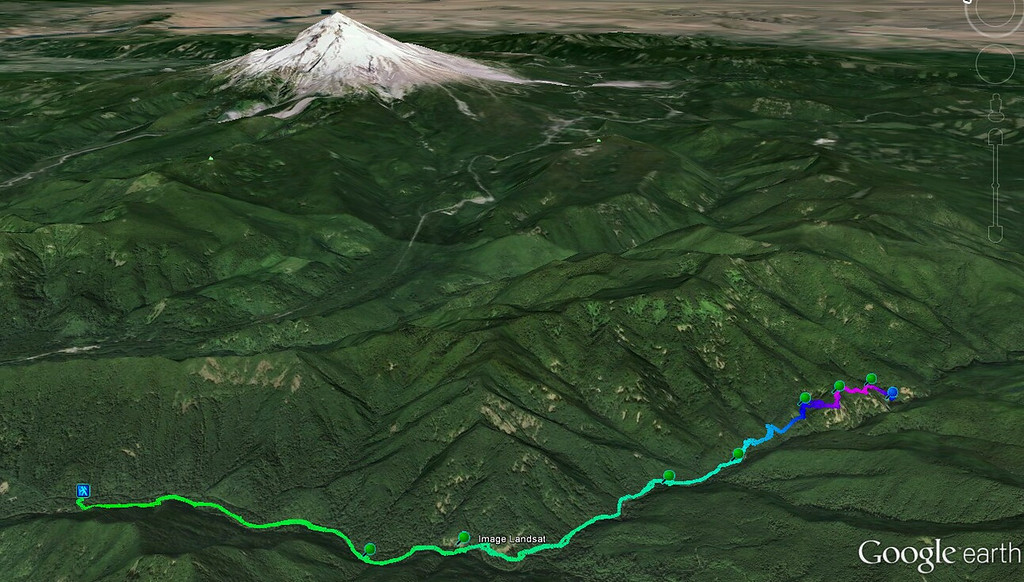 Great pics and report! I did not know about that falls and I've hiked that trail a couple of times over the years. Now I've got to do it too.

Don this trail would be good for one of our group outings.

Apparently there are several hidden falls along the Salmon River Gorge all requiring sketchy descents on user trails or scrambles down ravines. It sounds right up our street

That's one of my favorite secret spots. There's actually a trail that follows the river much closer than the main trail in that area.

BTW, did you ever hear about the crazy kayakers who went over those falls, and the other ones?

Great photos of the falls. They look noisy

These falls look powerful! Great canyon pano, too - I've never been able to capture it so it conveys the sense of scale.

The upper trail is one of my favorite places to go to in winter (& especially the rocky viewpoint), but I've not seen that side path leading down to waterfall. Next time I'll be on lookout for it.
Top

Guy wrote:Don this trail would be good for one of our group outings.

Apparently there are several hidden falls along the Salmon River Gorge all requiring sketchy descents on user trails or scrambles down ravines. It sounds right up our street

I'm in - let's put this together. Any Sunday for the rest of the year is good for me.

Guy, is there any view of 'Little Frustration Falls', the 200+ ft little creek just to your left while looking at the main falls where you were?
Clackamas River Waterfall Project - 95 Documented, 18 to go.
Top

Nice report, Guy! That vantage point is new to me, and I thought I had followed most of the side paths on that trail! Goat Creek gets you to Little Niagra, Vanishing and the lead-in to Frustration Falls, but the better trip is down to Split Falls, then up to Stein Falls... but that would qualify as a loony hike by the time you factor in all of the on/off trail mileage!

Some ancient photos from when I was spending a lot of time in that area (apologies for the Web 1.0 quality... posted this just after Al Gore invented the internet...

BrianEdwards wrote:Guy, is there any view of 'Little Frustration Falls', the 200+ ft little creek just to your left while looking at the main falls where you were?

Yes, you can see part of that waterfall, but its certainly not a great view. Mainly you are standing right at the lip of the falls. I have been able to get a decent view of the falls, but its not ideal. Part of the decent to the platform that Guy visited is right along that little creek. Fantastic little spot that I alway enjoy visiting.
Top
Post Reply
14 posts