I did a version of this hike with my dad a few weeks ago, but it was too foggy to get many pictures. So my wife (Krista) and I did it again last Saturday to get some pictures of the fall foliage and to see if the uphill was really as rough as I remembered. The bit up Ruckel Ridge is really more fun than it is difficult, though I was definitely feeling those first few miles.

We got a late-ish start, and by the time we arrived at the parking area next to the fish hatchery it was nearly full. It filled up completely in the couple minutes it took us to get ready. We parked, walked up the gated road to the campground, and found the trail (marked for Buck Point) near Campsite 5. The first half mile or so to Buck Point and the powerlines is relatively gently-graded. Then, after a short bit of downhill, you come to the first real climb. 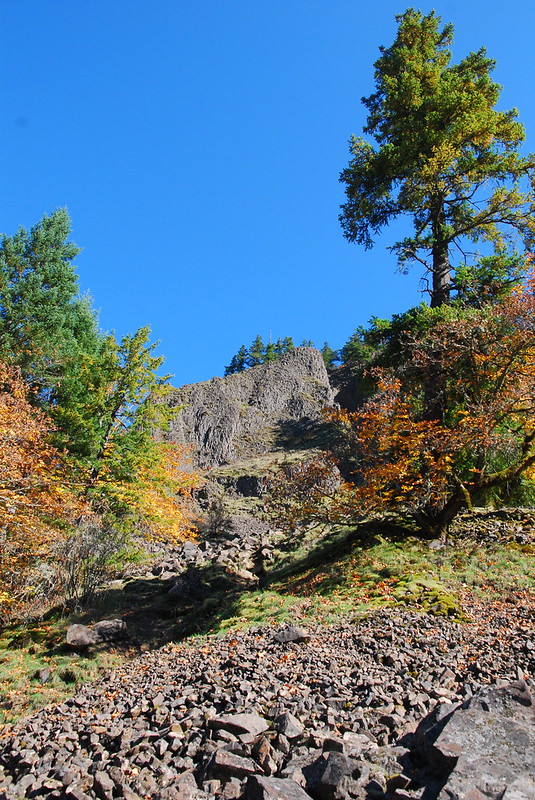 The trail braids a little here, and there are faint paths leading several directions. We veered left around the rock pillar in the center of the photo, which must have been right, because, after another short bit of climbing we reached the ridge proper and excellent views of Cascade Locks. 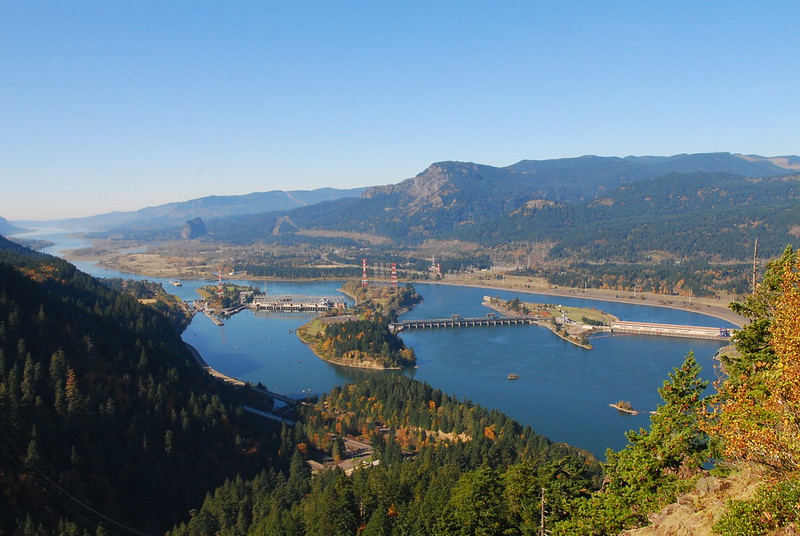 From there, the trail stays pretty near the ridgeline all the way to the Benson Plateau. It was raining when we went a few weeks ago, which made some of the climbing a little sketchy, but on Saturday climbing up the (dry!) roots and rocks was just an absolute blast. Nice to have more of an all body workout than usual. I skipped the Catwalk, having had a bit of a scare on it last time, but Krista casually walked over the whole thing no problem. 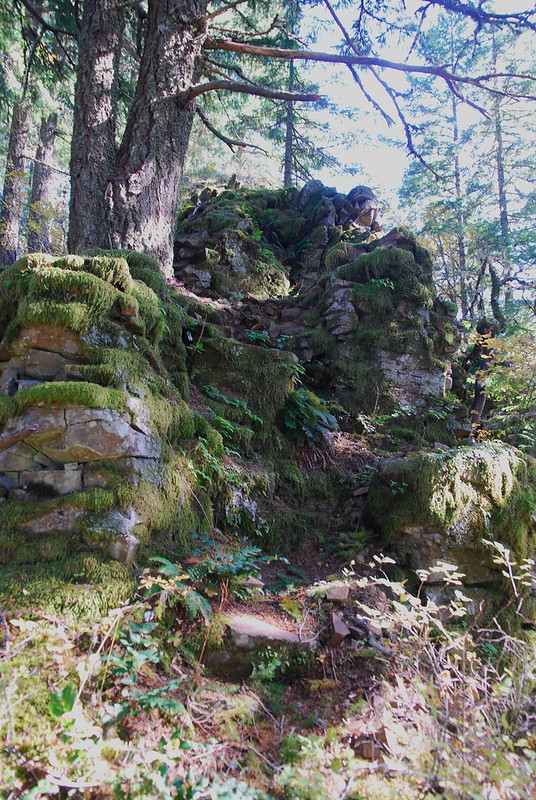 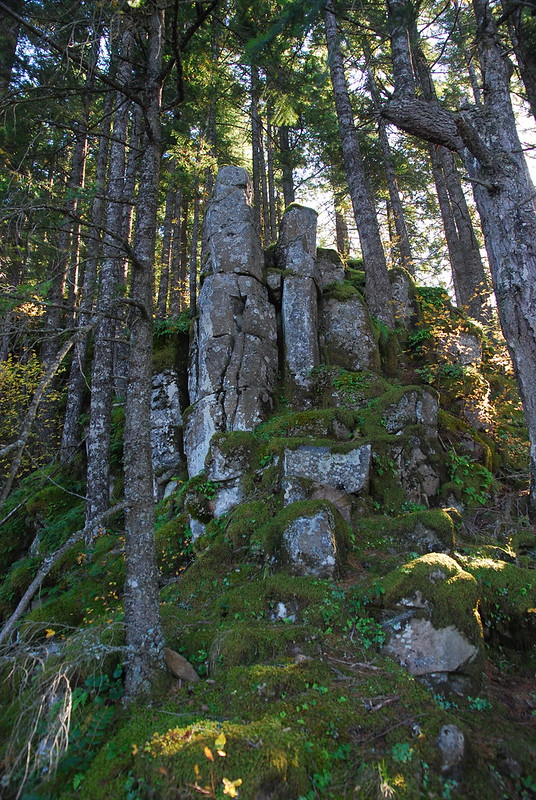 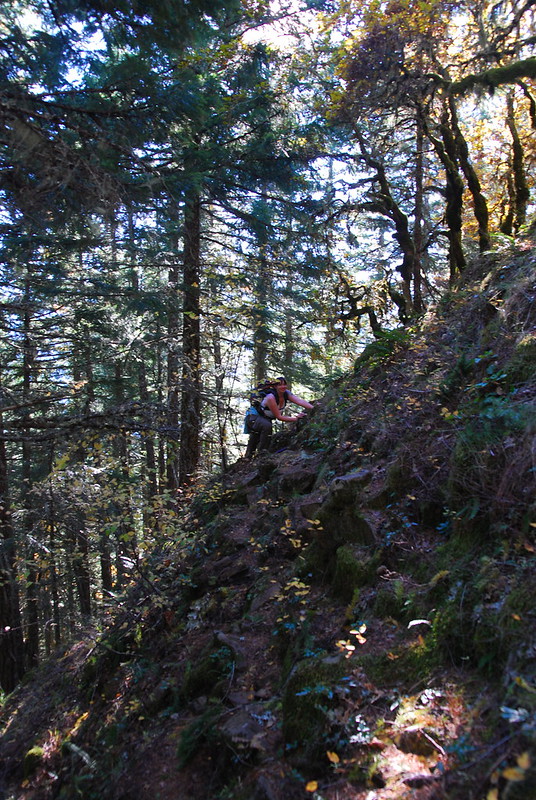 Of course, the views were fantastic. You can't really see it, but Hood is poking out very slightly above those hills. 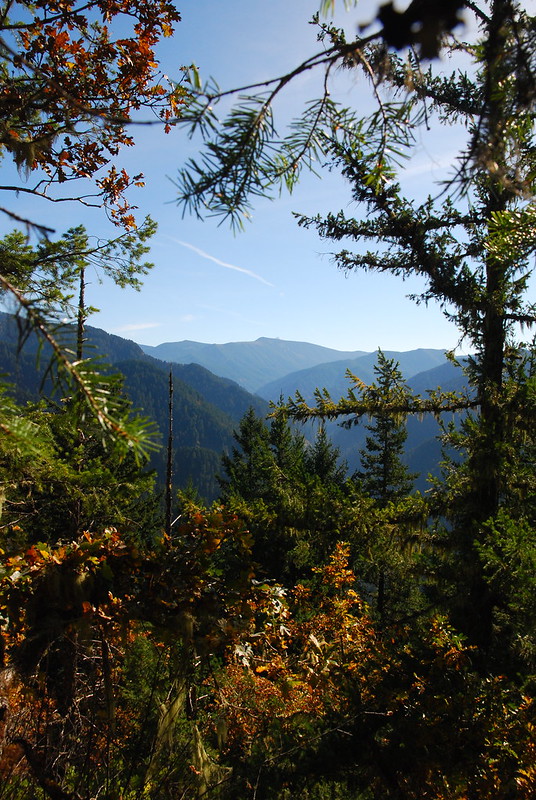 Up on the Benson Plateau, I was surprised to see Ruckel Creek running relatively full: it was completely dry a few weeks ago. Maybe snowmelt? 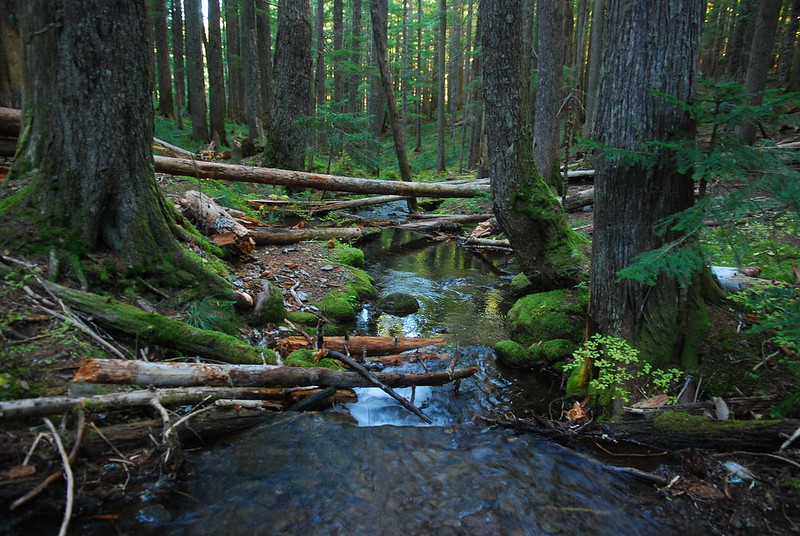 We didn't spend a ton of time on the Plateau because it was already getting late into the afternoon and we didn't want to do too much of the walk back with headlamps. In retrospect, though, I'm glad that we got such a late start, because it meant that almost our entire hike down the Ruckel Creek trail was in golden hour. 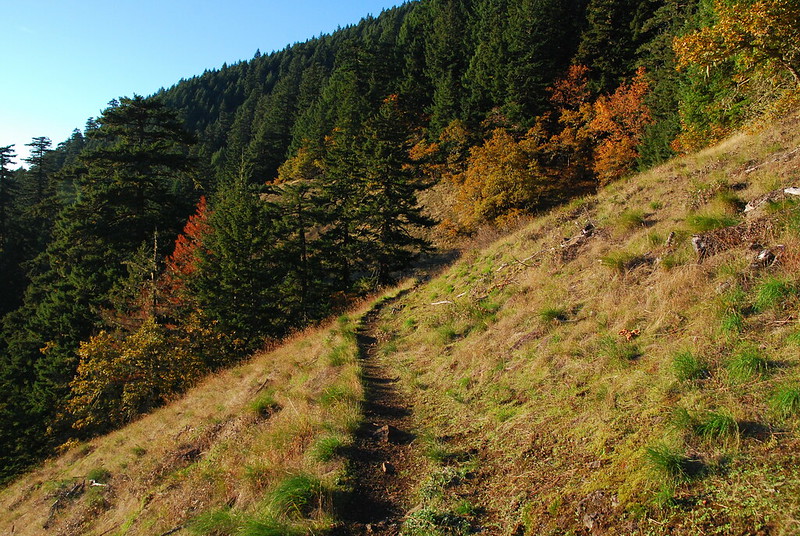 I bet those meadows are gorgeous with wildflowers in Spring. It was cool even just to see their husks. 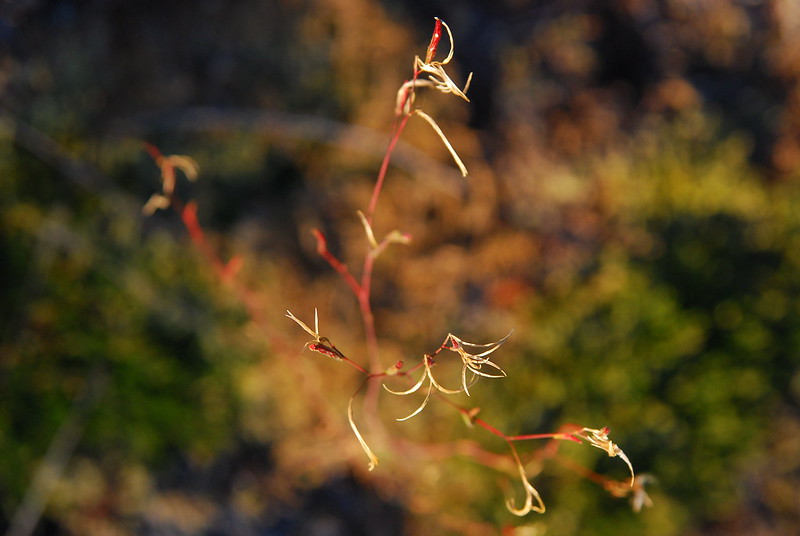 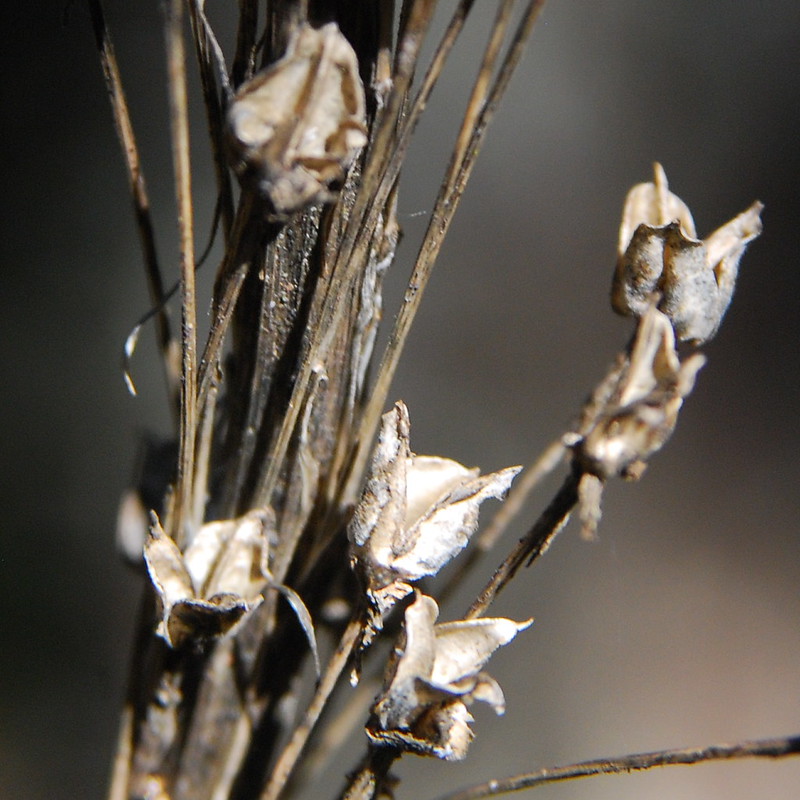 The fall foliage at sunset was one of the prettier things I've seen in a long time - like a Pre-Raphaelite painting. As usual, the pictures don't even begin to do it justice. 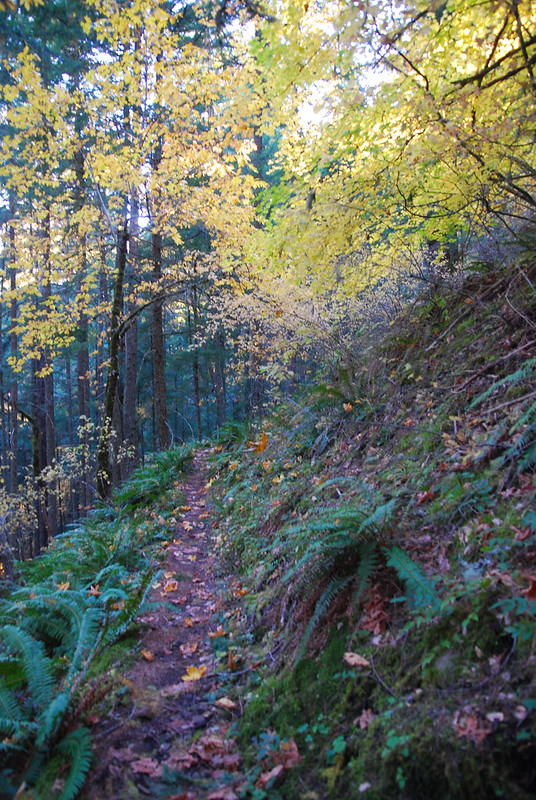 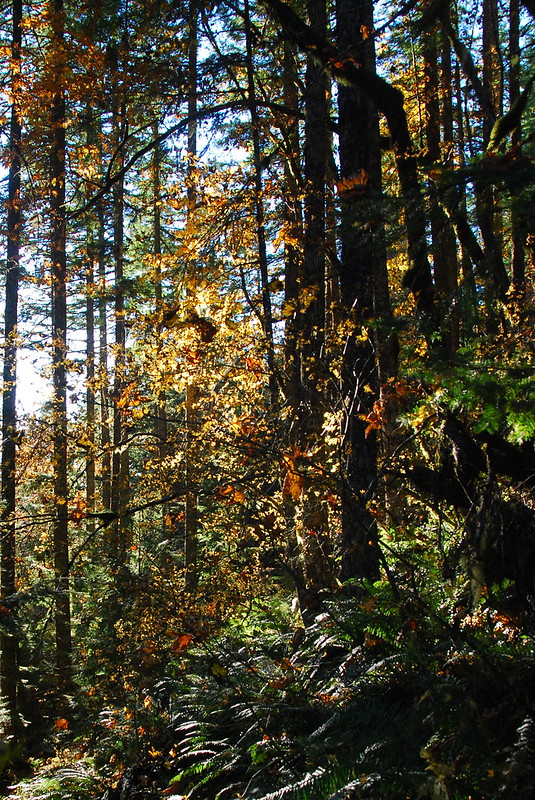 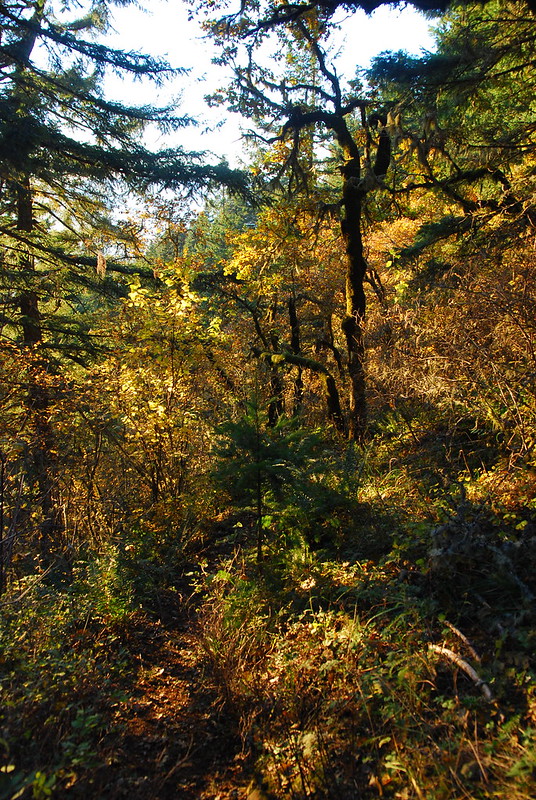 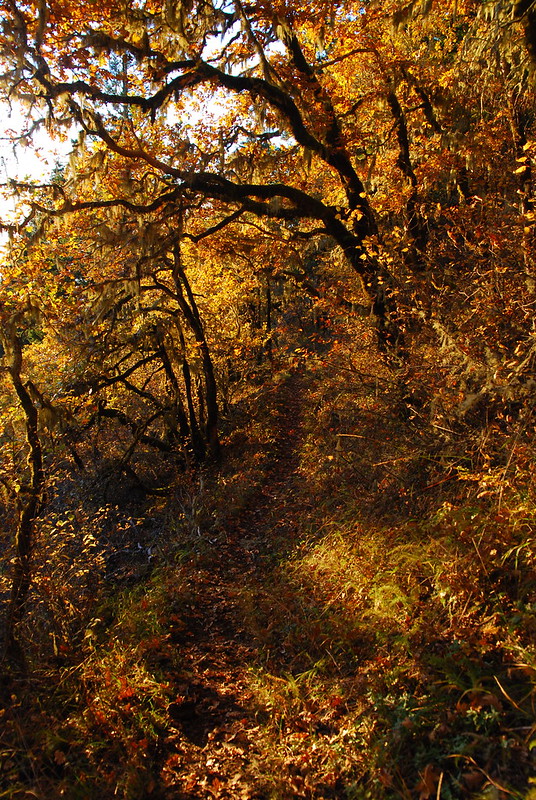 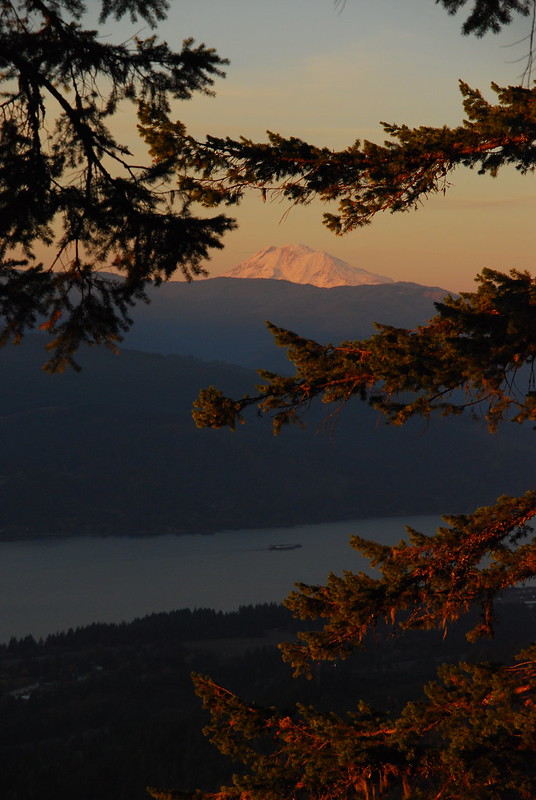 We did the last mile or so with headlamps, but it wasn't bad at all - actually really cool to see the lights from Bridge of the Gods and Cascade Locks. A fantastic day in the woods, made all the better by what's becoming our traditional post-hike stop at Foster Burger.
Robin

Very nice! Some of these late Autumn afternoons in the Gorge when the sun's angle is just right and actually comes in beneath the leaves and sets the scene on fire,,, those afternoons etch themselves into your memory.
Top

One of my favorite hikes.

rick6003 wrote:One of my favorite hikes.

It's turning into one of mine, too. Though I think next time we'll have to make a longer loop out of it.
Robin