Restarting the train of government is a slow process (even with its clown car temporarily decoupled), which gave me the opportunity to squeeze in just one more mid-week, bluebird day of hiking. I wanted the biggest views possible, which brought to mind Yocum Ridge. Thanks to pdxgene’s recent TR (Ramona Falls), I knew crossing the Sandy wouldn’t be an issue. So Friday found me leaving the Ramona Falls TH early enough (except for a few mushroom pickers, I was alone in the parking lot) to cross the Sandy just as the sun was breaking over Hood. 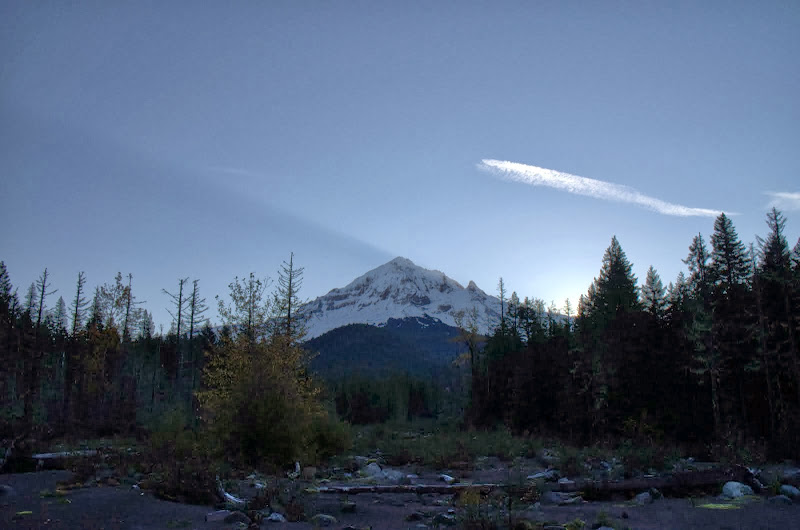 Then it was up the PCT, past Ramona Falls (obligatory shot of same), 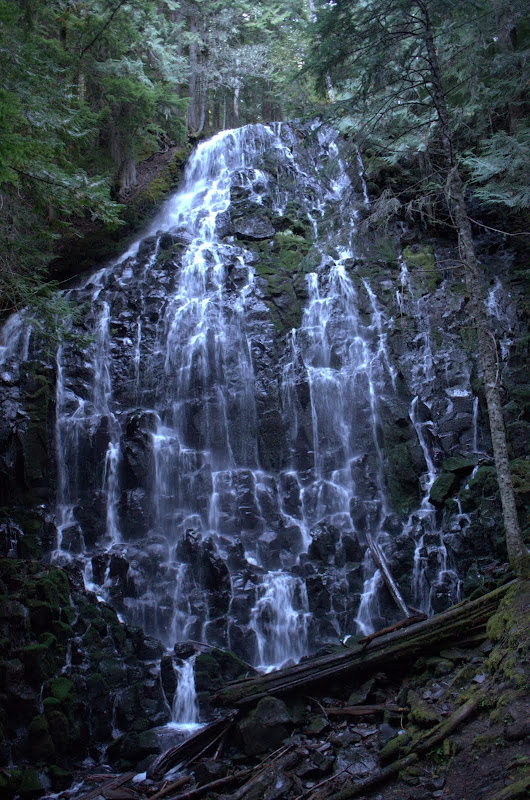 to connect with the Timberline Trail (#600) and then the Yocum Ridge trail (# 771) for the gentle, but steady, climb to the small pond at 5,200’, where the first patches of snow appeared. 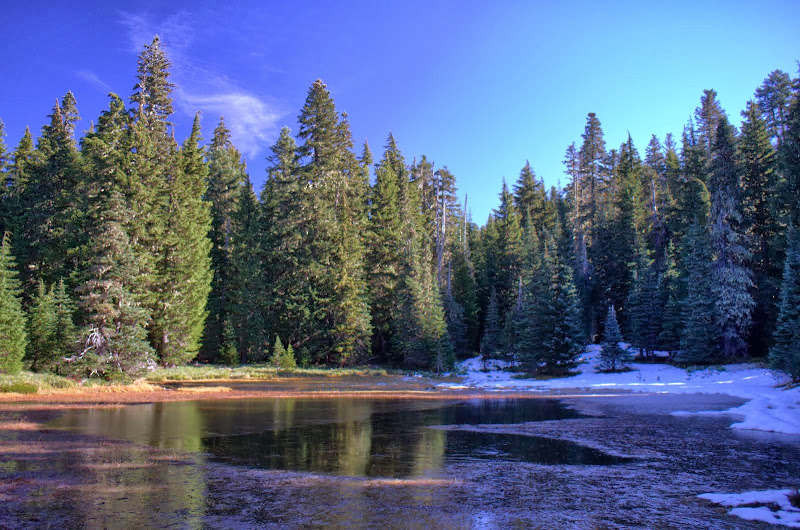 I continued on the 771, encountering a few more patches of snow, until the point (at about 5,500’) where it makes a hard right turn and contours S to the Sandy River Canyon viewpoint. I’d get there eventually, but first I turned left and headed due E straight up the ridge toward the high campsites at 6,285’. There was really no significant snow – except in a few shaded areas and defiles – until about 6,000’. Up to just below the high campsites, this hike is mostly in the trees, with limited views, 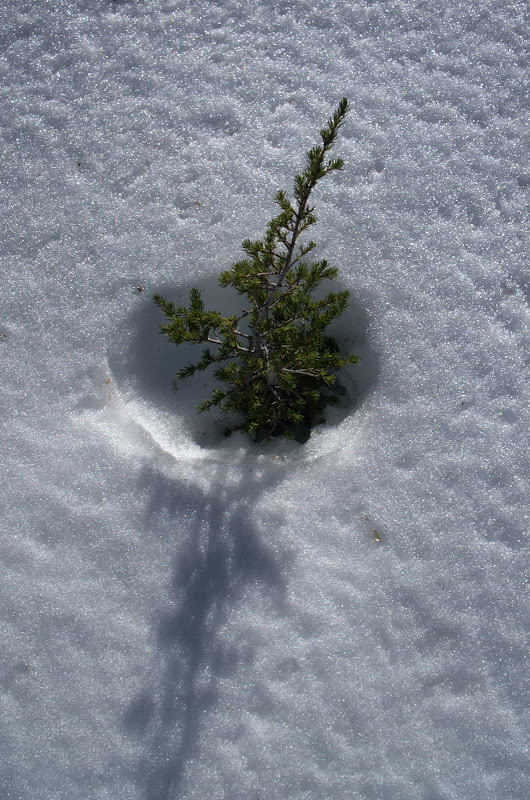 which is why the HUGE view of Hood you get when you finally crest the ridge is so stunning. 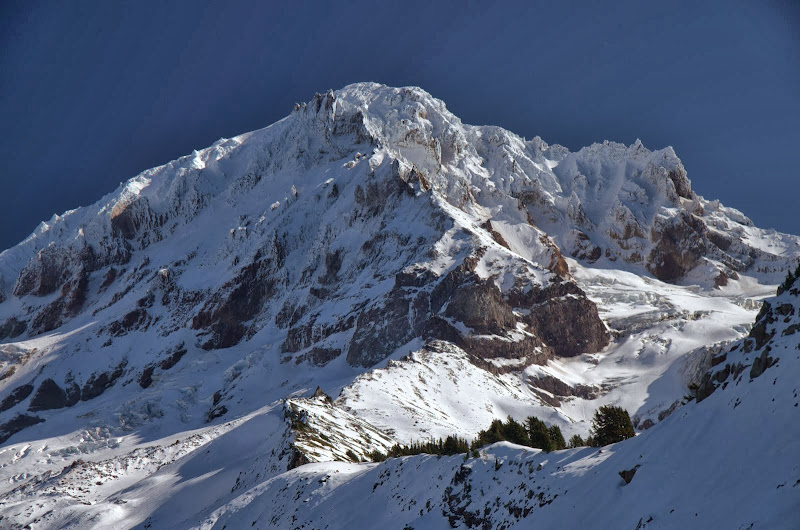 Once on the ridge, it was an easy snow walk around to one of the high campsites (in the trees in the foreground), 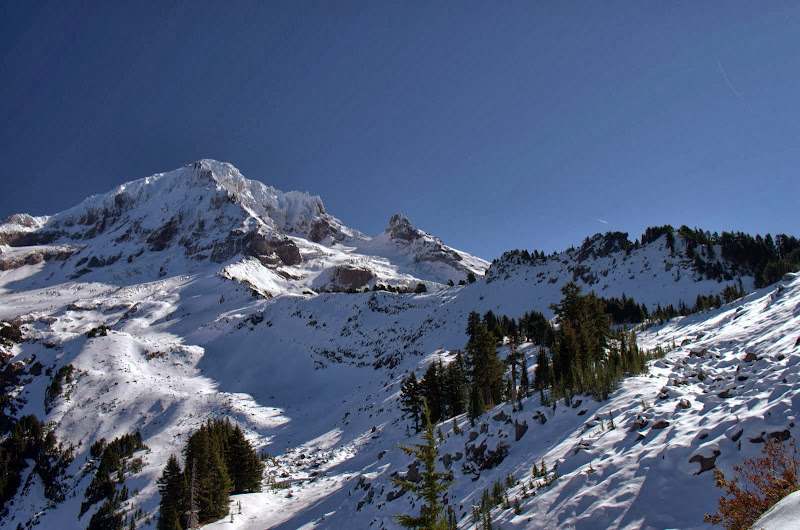 which, despite the heavy snow all around, were pretty snow-free. 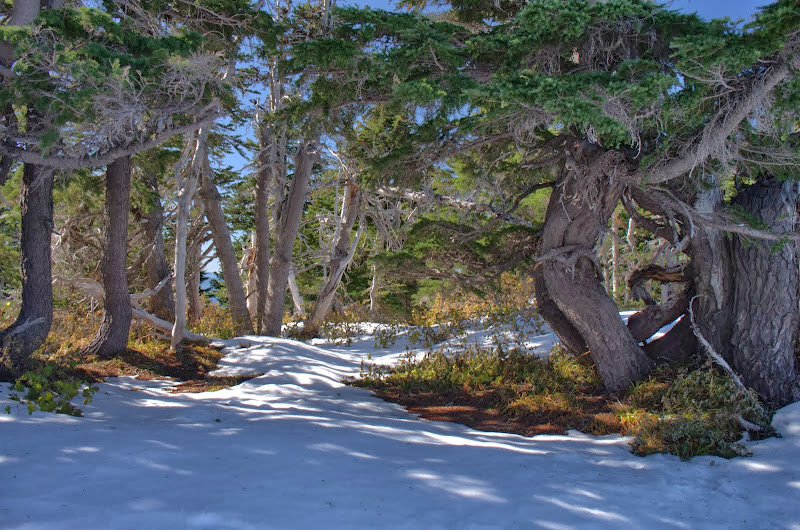 I was alone up here and, judging from the absence of tracks, there hadn’t been any other human visitors recently either. I settled in for a warm, sunny, wind-free lunch, with one of the most expansive views around. 1: Buck Peak, 2: Table Mountain, 3: Lost Lake, 4: Greenleaf Mountain, 5: St. Helens, 6: Indian Mountain, 7: Chinidere Mountain, 8: Tomlike Mountain(?), 9: Greenpoint Mountain, 10: Mt. Rainier, 11: Defiance. Wow! 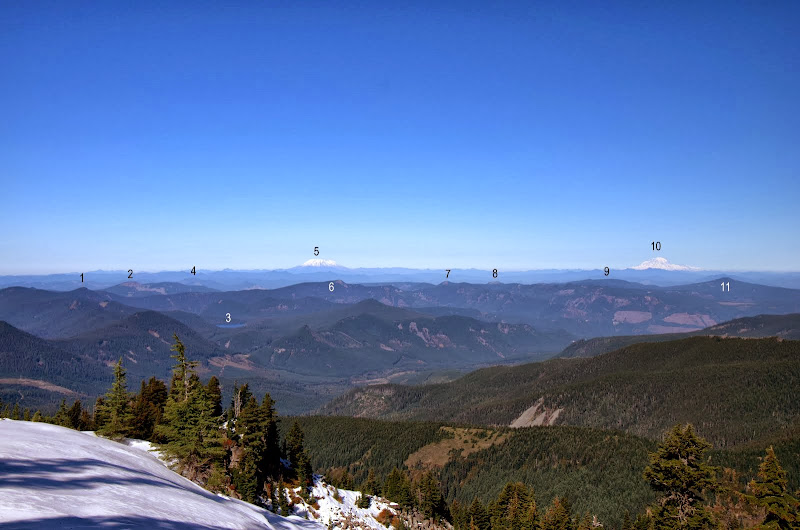 All too soon, it was time to head down to the Sandy overlook and the 771, following a route 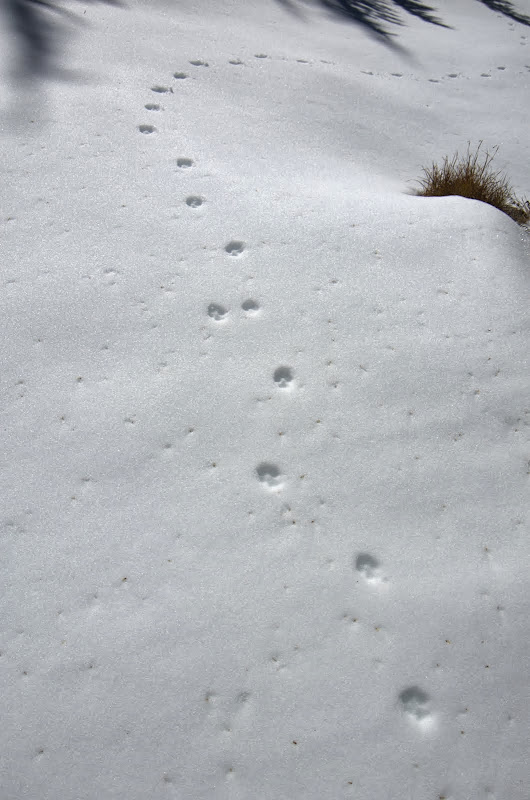 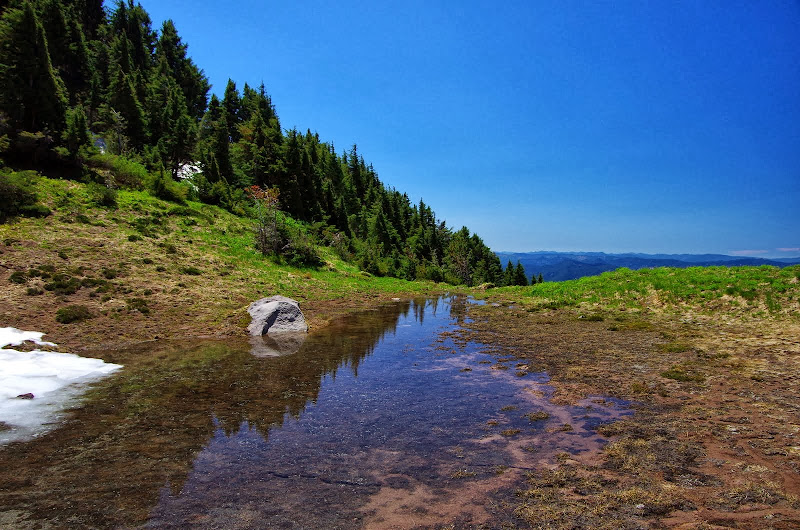 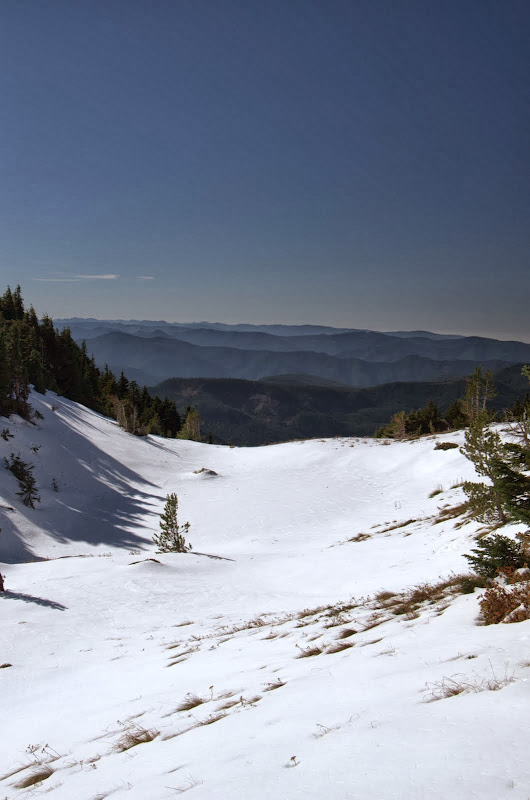 During the descent, I got a good view of Jefferson, 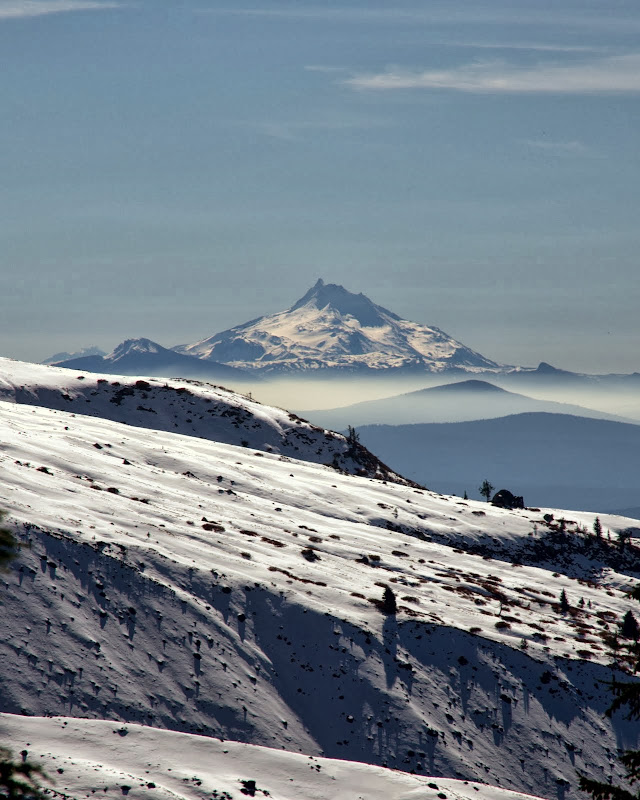 before intersecting the 771 about ¼ mi W of the viewpoint. From there, a good use trail (arrow) works its way back up to the high campsites but when there’s snow above 5,500’-6,000’, it’s just as easy to go straight up from further W on the 771 (or go directly up the ridge like I did). I also think a lot of folks who just follow the 771 miss an opportunity to go higher and see more. 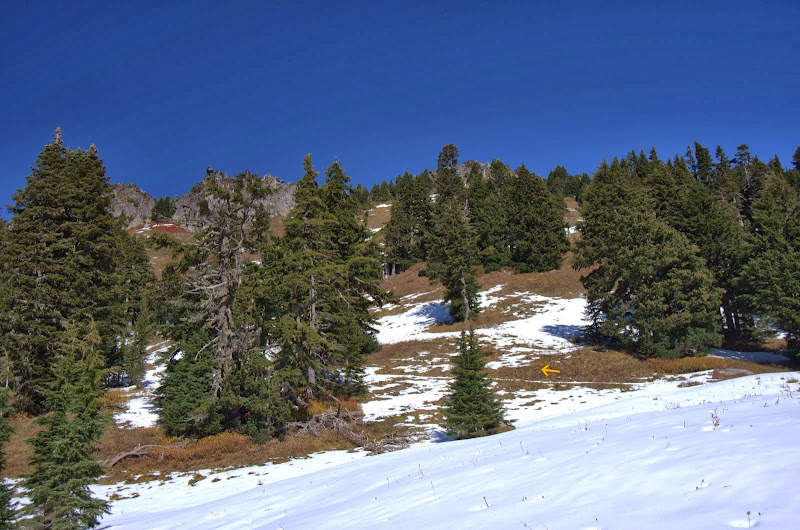 That said, the views from here of the Sandy River Canyon 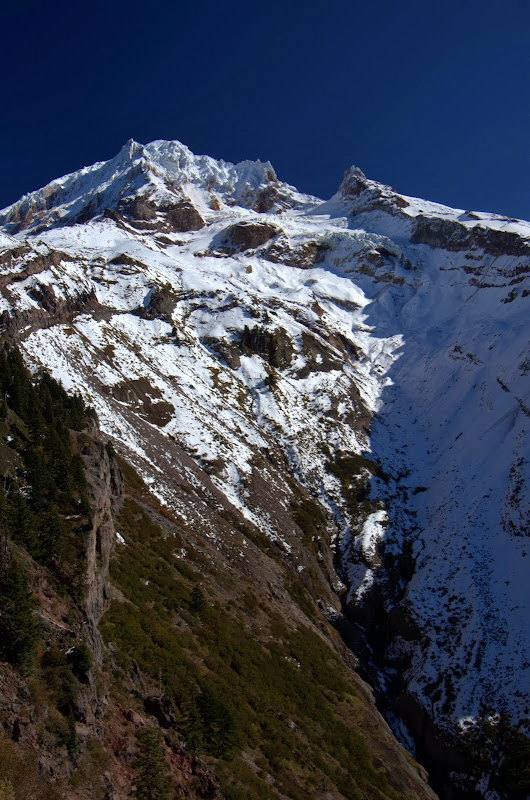 and of the Reid Glacier 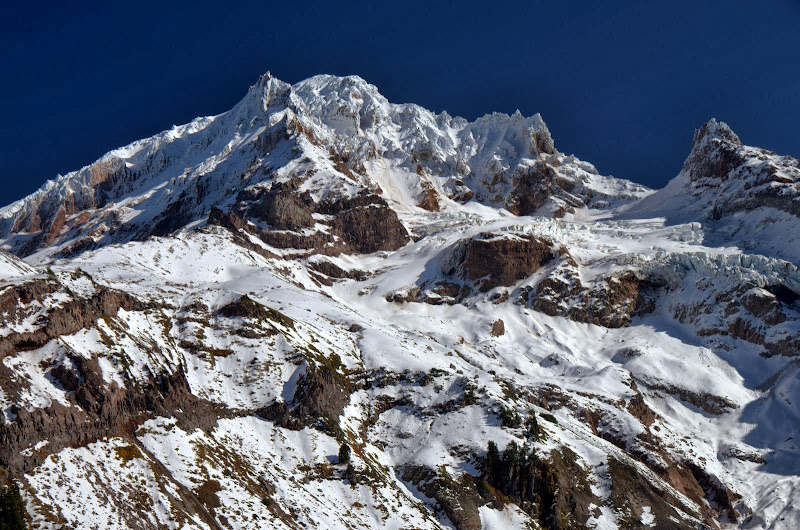 are jaw-dropping. Put this together with a visit to the high campsites and have your quota of views filled for a long time. Reluctantly, I turned away from all this and headed back to the TH. Passed two people coming up the 771, two on the Ramona Falls trail (#797), and one (!) on the 770 to the TH - that was the “crowd” for the day. Classic hike, brilliant day, magnificent scenery. 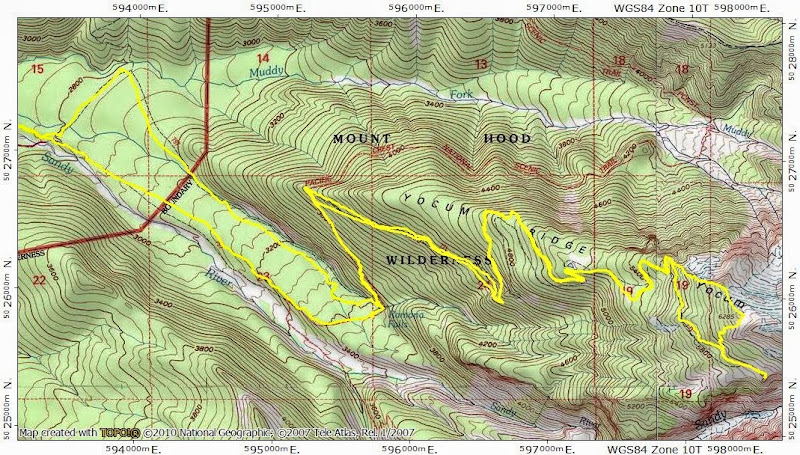 Another spectacular TR from VM!
Time spent hiking will not be deducted from your life.

Stunning photos VanMarmot. I've been waiting for someone to get some shots from Yocum since the recent snowfall.

Your pond photo looks like it's two shots from fall and winter stitched together. Very cool!
Top

Wonderful. I especially love the seventh photo with the gnarly trees.
"When we try to pick out anything by itself, we find it hitched to everything else in the Universe." - John Muir
Top

Great closeups of the mountain, VM. That picture with the labels from your lunch spot is awesome, I always appreciate those.
Top

Wow, great photos! Thanks for posting! Your mountain id photo had me feeling like I was there, and some of the close-ups had me thinking I could feel the cool air blowing on my face. Great narrative, too! I love it up there, but haven't been up again in a couple years. I need to get back!
Top

So those were your tracks we saw today!

I like your idea of leaving the trail and following the ridge up for the last bit. I have logged that and you "shortcut" down as waypoints on my GPS, so I will do something new next time I visit. Mt Hood sure looks gorgeous in your pictures!

I assume that there will be a quiz on the names of the eleven points of interest at the Christmas PH Meet n' Deet!
Some people are really fit at eighty; thankfully I still have many years to get into shape…
Top

Guy, Bosterson and I did almost the exact same route the following day - even the shortcut.

Now I don't have to write a TR. I can just point people here and say, "This is what I did!"

I will add a couple of pictures, only because I am playing around with the MS ICE photo software:

View from the south viewpoint:

View from the north viewpoint: