Since the government shutdown deprived me of gainful employment this week, I decided to take a little camping trip to Oregon's newest state park: Cottonwood Canyon. It's 8000 acres of state land, mingled with another 8000 of BLM land, strung along 12 miles of the John Day River. It just opened a few weeks ago, and it's the state's second-biggest state park, after Silver Falls. Previously, the land was a cattle ranch, and was purchased by the Western Rivers Conservancy for about $8 million, which then sold it to the state.

I figured that camping there on a Monday night in October would be a good way to avoid crowds, and it turned out that my guess was correct. Only three other sites in the campground were occupied, and I saw only two other hikers on the trail.

The park's about a two and a quarter-hour drive from Portland, via 84. The drive takes you through Sherman County, which is the Saudi Arabia of wind energy in Oregon. Here's the Biglow Canyon Wind Farm looming over the town of Wasco: 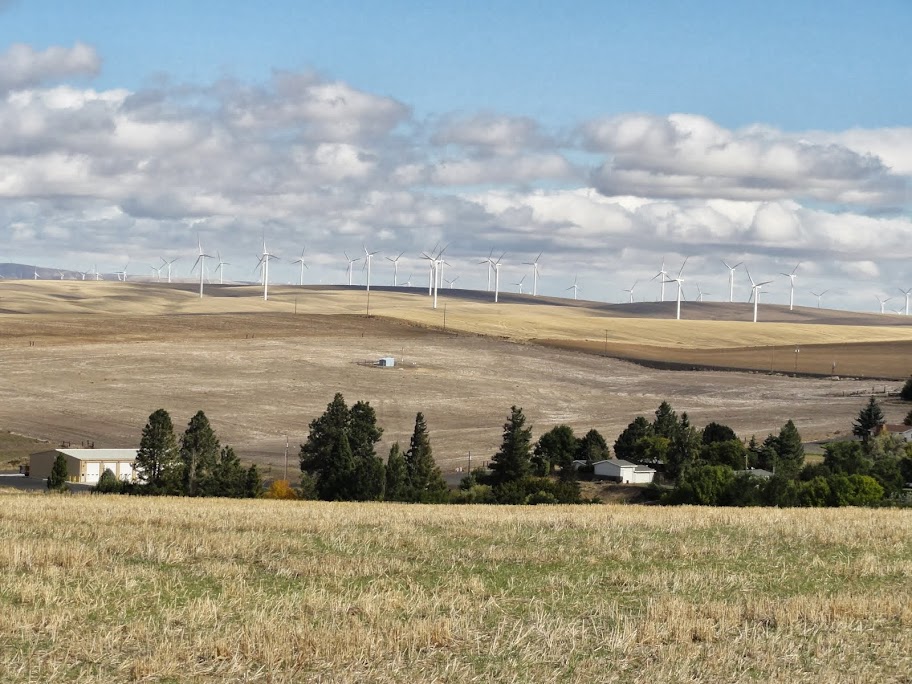 There are 8 wind projects in the county, and they generate so much property tax revenue that the county gives every household in the county a $590 annual check, just to make everyone feel good about wind energy. On top of that, landowners get around $6000 per year in rent for every turbine on their wheat fields.

Anyway, on to the park. They've preserved an old barn from the ranching days, and have turned it into a pretty nice historical display: 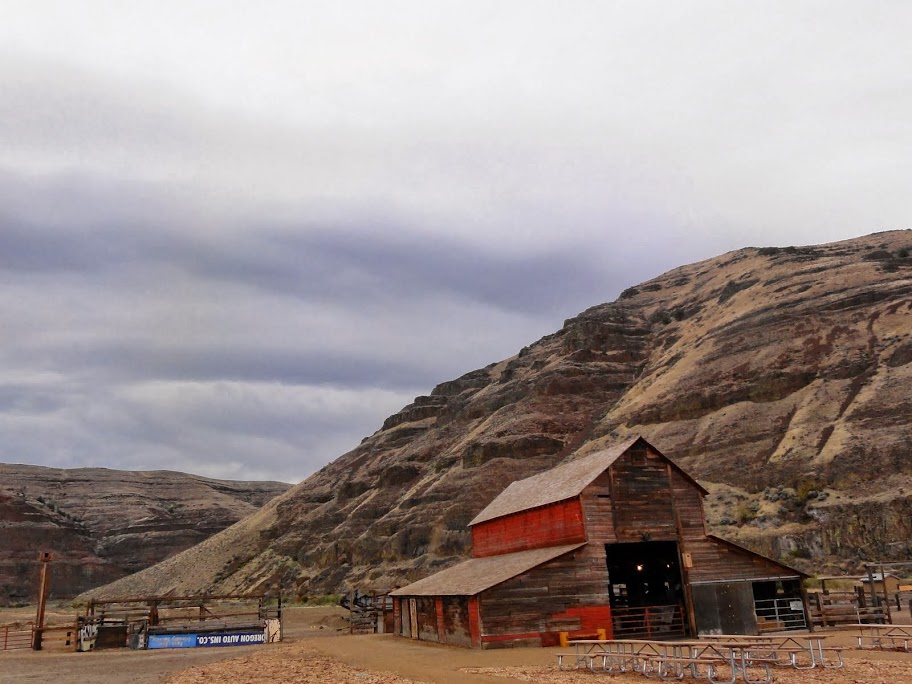 This display explains the canyon's geology:

And there are a number of plaques like this, quoting local accounts of the history:

The spanking-new campground is a rather barren place: 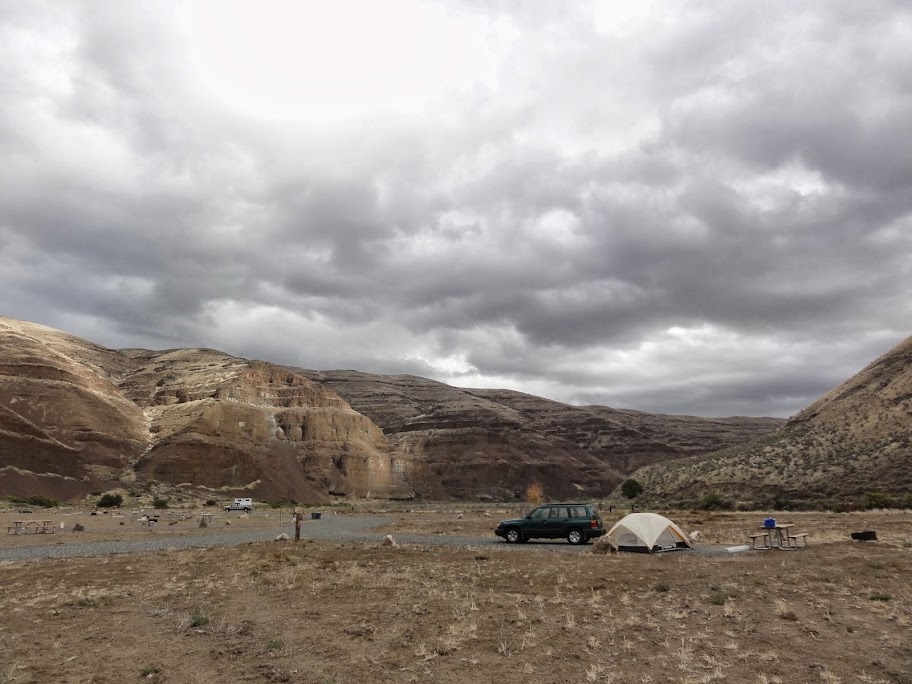 While I was there, the wind in the campground hardly ever stopped blowing, and there aren't any trees to block it. A few saplings have been planted, but it's going to be a long time before they do much good. There's a certain irony in the park's name, since there aren't a lot of cottonwood trees to be seen there. The real shame is that it wasn't always this way. Like most other western rivers, the John Day was once lined with galleries of cottonwood trees. Then, starting in the 1930s, range scientists got the notion that these trees were parasites, sucking up water, and cutting them down would increase stream flows and allow more forage to grow for the cows. So, a massive clearing effort stripped the riparian areas, exposing the rivers to the sun, warming the water, and destroying fish habitat. It's going to take a long time to fix that mistake.

But enough preaching. I took a fine hike along the river, on an old ranch road that's now called the Pinnacles Trail, for which the park folks have made a spiffy trailhead: 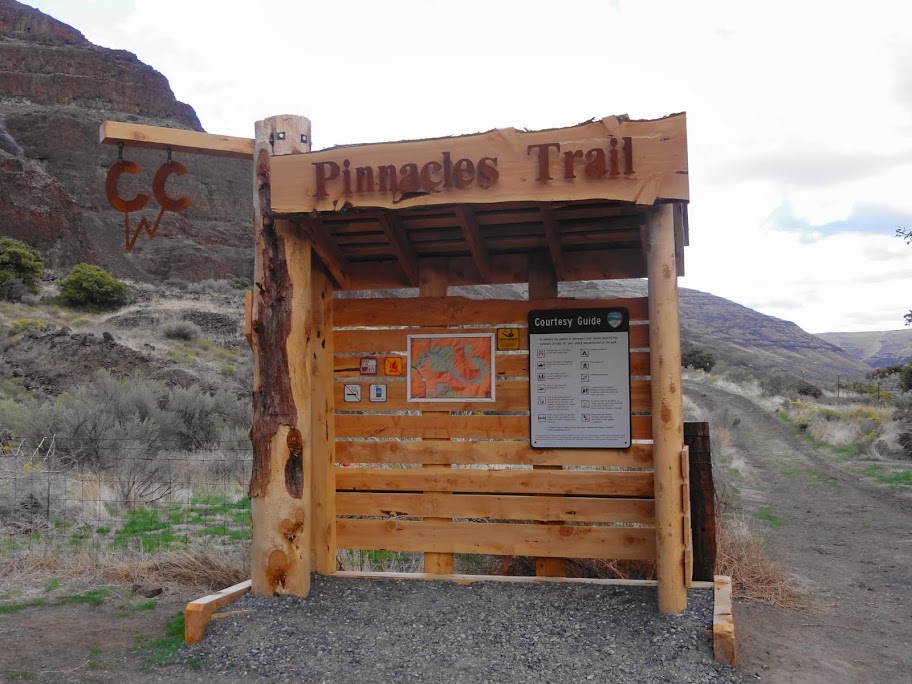 The trail's decor includes a standard icon of cattle country: 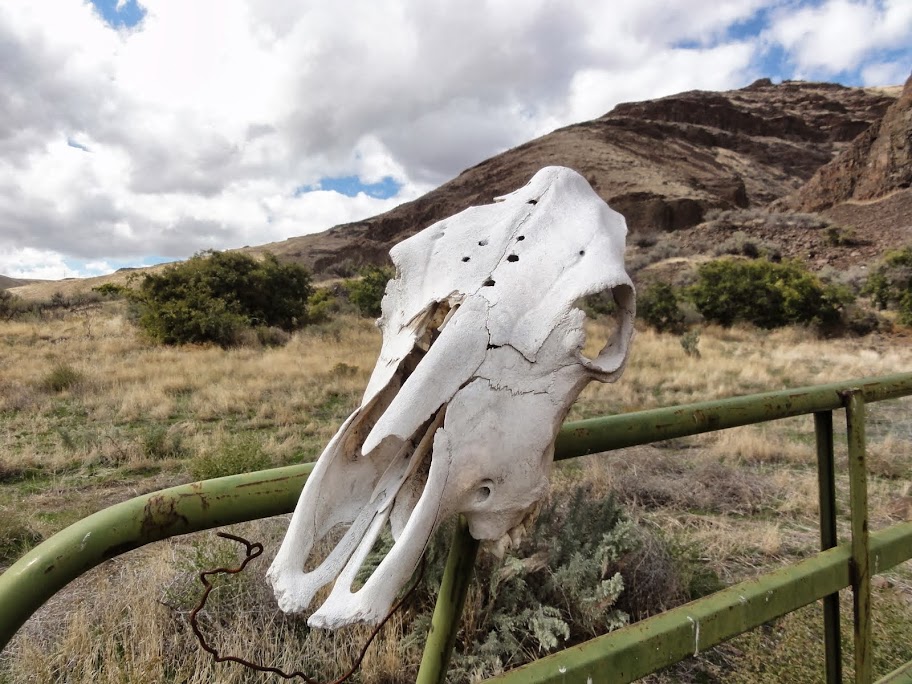 The trail's 4.3 miles one way, and it's mighty scenic: 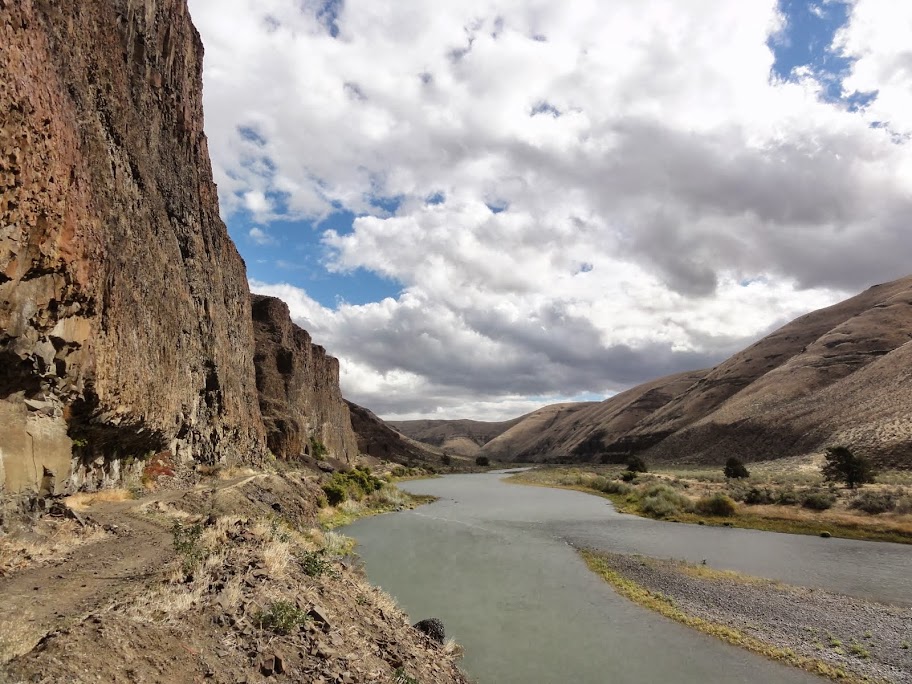 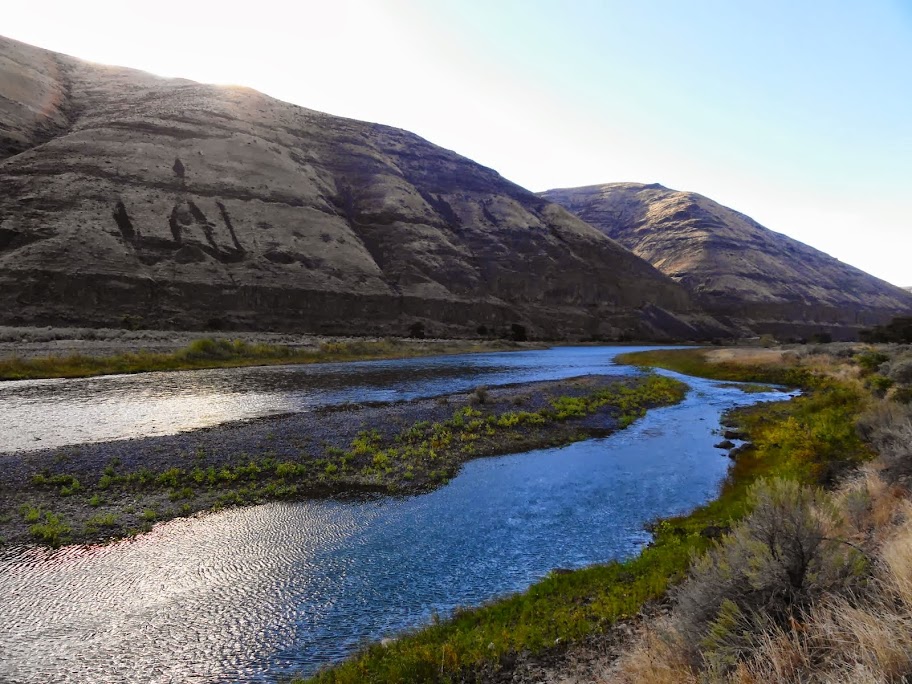 At one point, I stopped to take a photo, while a grasshopper buzzed in the grass near my feet, until I realized WHOA, THAT'S NO GRASSHOPPER, IT'S A RATTLESNAKE! 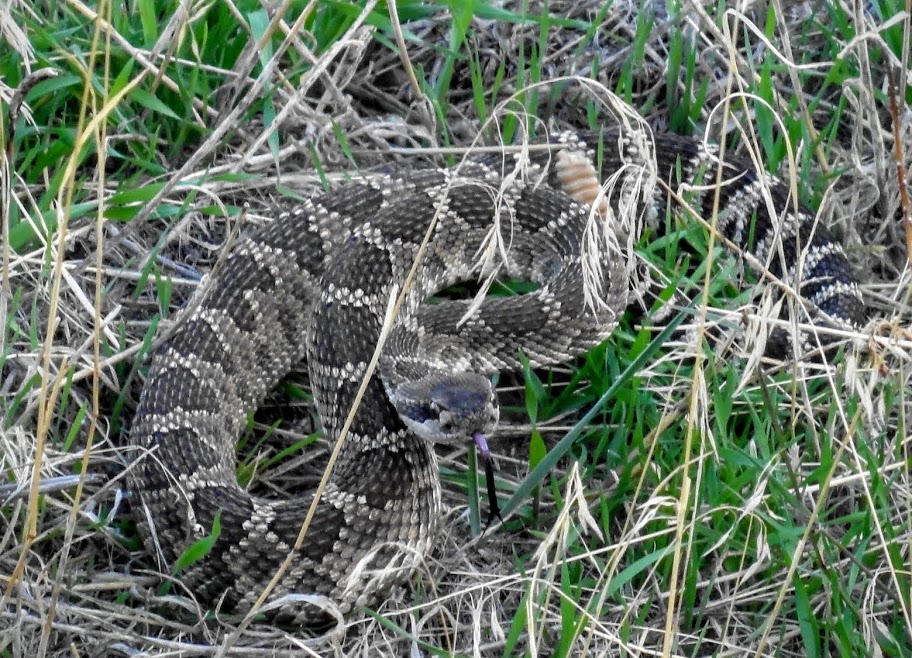 I jumped back, and he kept buzzing at me while I snapped a few shots. My dog, Scout, wanted to check out this odd creature, but I called her back before she got too close. We were able to get past the snake with no harm done on either side, and for the rest of the hike I scanned the ground with considerably greater attention.

One more thing about the campground: The ground was covered with little burrs armed with needle-sharp spines, and when I first set up my tent, these burrs poked right through the ground sheet and tent floor. I realized they'd likely puncture my Thermarest, so I relocated the tent to the gravel parking apron. Of course, since it was a freestanding tent, and since it was windy, I lost hold of it while moving it and it went tumbling end over end across the campground, with me chasing behind until I finally snagged it. Sorry I don't have a video to show. Anyway, if you're thinking of camping there, I'd recommend a heavy canvas ground cloth. Also, these burrs were a constant nuisance to Scout during our hike, because she kept getting them stuck in her paws.

On the drive home, we took a detour to see White River Falls, which I'd read about on this forum but had never seen. It was well worth it: 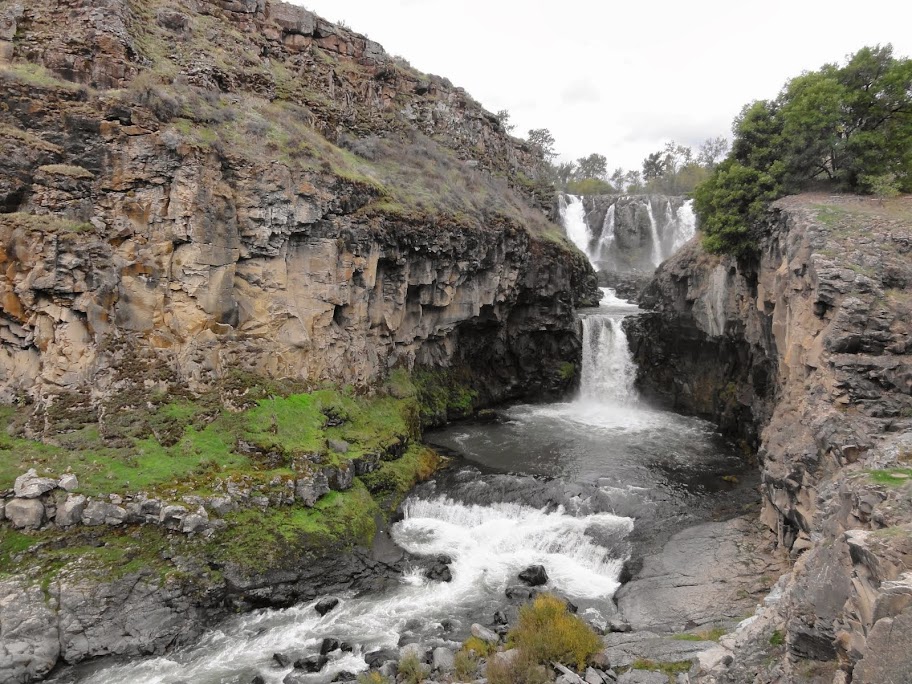 There's a trail that follows the river down from the falls for a little ways, and there's another smaller falls and some nice riparian scenery: 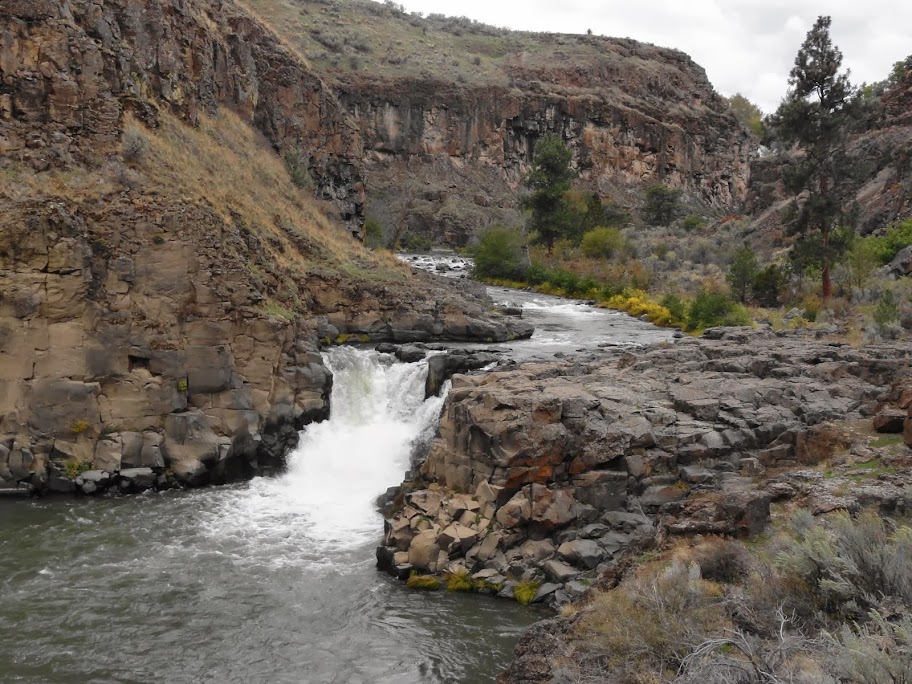 Time spent hiking will not be deducted from your life.

we want replay and video of tent blowing away

so, do they allow backpacking?
Top

I don't believe they allow any backcountry camping. You'll have to hike the Deschutes for that.
Time spent hiking will not be deducted from your life.

Excellent! I can't wait to visit this park. I think it will be great in the winter.

Regarding backpacking:
I wouldn't be surprised if they'll allow one to park a car someplace (for an overnight fee) and allow one to backpack up or over onto BLM land. I've done just that at Cove Palisades and Smith Rock (and, technically, at Deschutes River SP as well). At least, I'd hope. I've never understood why State Parks are so unwelcoming for backpacking, considering that it's lower impact than car camping.
Top

Charley wrote:Regarding backpacking:
I wouldn't be surprised if they'll allow one to park a car someplace (for an overnight fee) and allow one to backpack up or over onto BLM land. I've done just that at Cove Palisades and Smith Rock (and, technically, at Deschutes River SP as well). At least, I'd hope. I've never understood why State Parks are so unwelcoming for backpacking, considering that it's lower impact than car camping.

Yes, I'm pretty sure any BLM land is open for camping, unless expressly posted otherwise. And as the park map indicates, there's a lot of BLM mixed in. There didn't seem to be a whole lot of flat ground along the river though.

The trails are open to bikes.
Time spent hiking will not be deducted from your life.

I hope the rattler was shot with a telephoto.

Looks like a great place to visit.
"When we try to pick out anything by itself, we find it hitched to everything else in the Universe." - John Muir
Top

Waffle Stomper wrote:I hope the rattler was shot with a telephoto.

Yes, a short telephoto, plus that photo is cropped. I was about 10 feet from the little guy.
Time spent hiking will not be deducted from your life.

Looks nice, thanks for posting! I can't wait to go check this place out.
Will break trail for beer.

Ah, yes, the ubiquitous puncture vine or tackweed! (It has many other names, some not suitable for a family site.) The bane of dogs, bicycle tires and bare feet all over eastern WA and OR. One of the more noxious of noxious weeds!
Top
Post Reply
20 posts