Today was forecast to be the last bluebird day of Summer 2013 and I couldn't let myself spend it in a cubicle.

So casting off the corporate yoke (just a 24-hour hiking flu), I headed to Indian Heaven. Mel Hansen's 1977 Indian Heaven Back Country describes a use trail branching off from the Indian Race Track trail (#171), going through the Basin Lakes, and intersecting the PCT below Gifford Mtn. I had done part of it before (Gifford Way 2011), but coming down from the PCT. So Road 65 to Gifford Way to the PCT to Trail 171 and then back to Rd 65 looked like a good short loop for what turned out to be a day of stellar hiking weather.

Gifford Way branches off (arrow) from Tr 171 just past the wilderness sign-in kiosk, 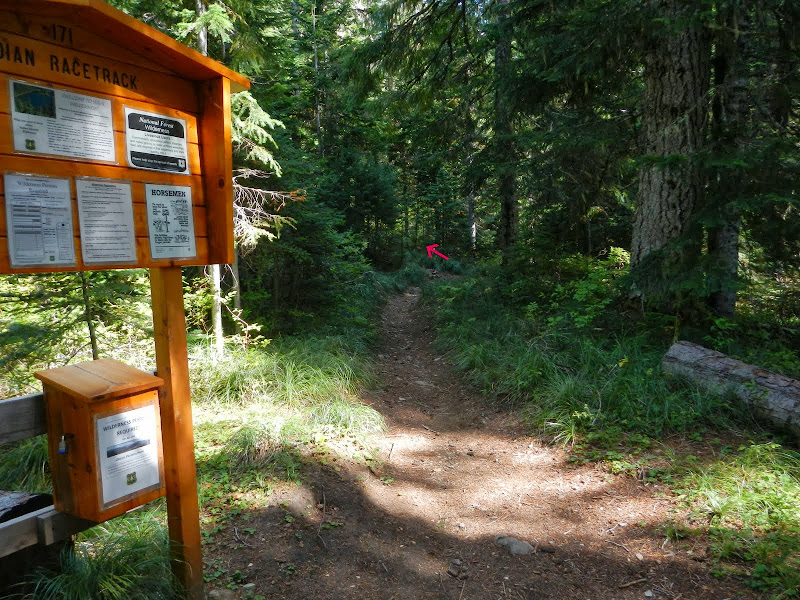 and is pretty easy to follow (just a few sketchy spots where it’s been cleaved by old blowdowns) as it heads upslope toward the Basin Lakes. The flowers are all gone, so it was another day for mushroom shots. 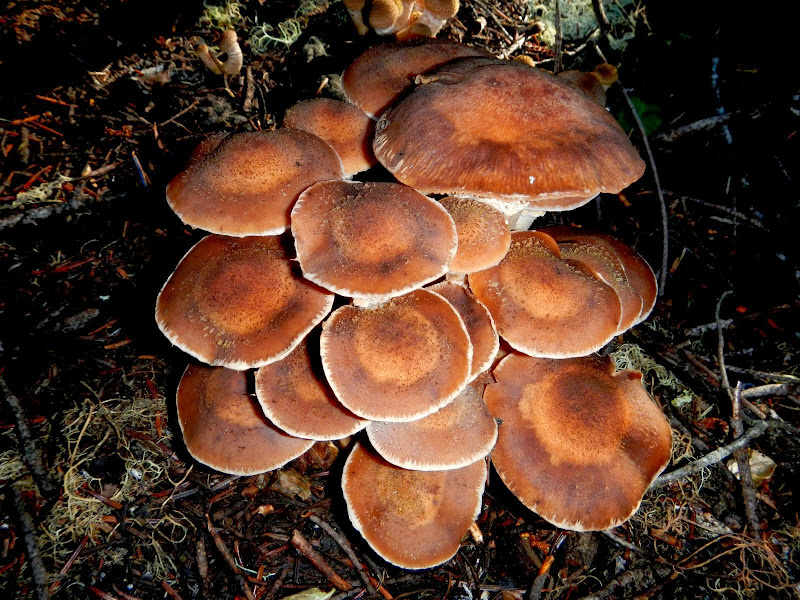 This way trail only skirts the southernmost of the lakes, 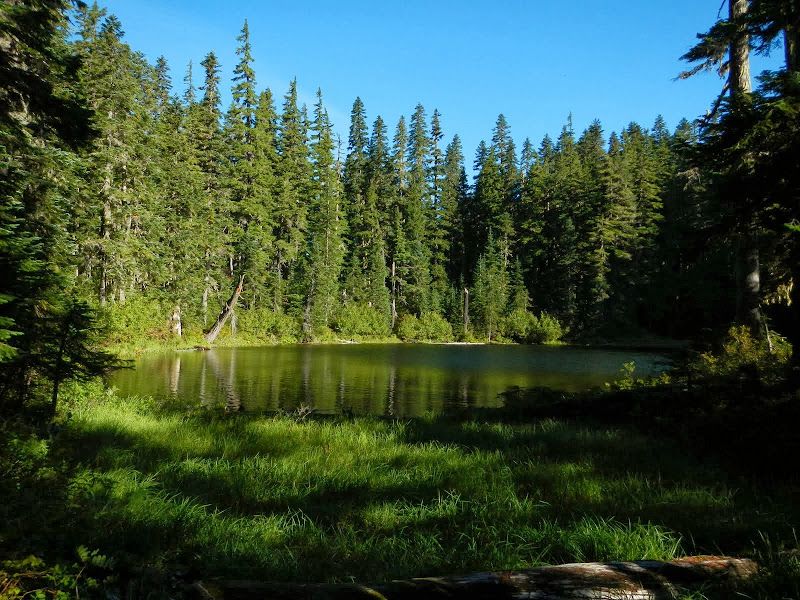 and I didn’t take the time this trip to wander over to see them, but Bobcat has posted a great TR of a visit to all of them (Bobcat’s Basin Lakes). Gifford Way intersects the PCT just N of Berry Mtn and I took it S until I could head XC up to Pt 4996 for views and lunch. Hood and Jefferson were visible to the SE, 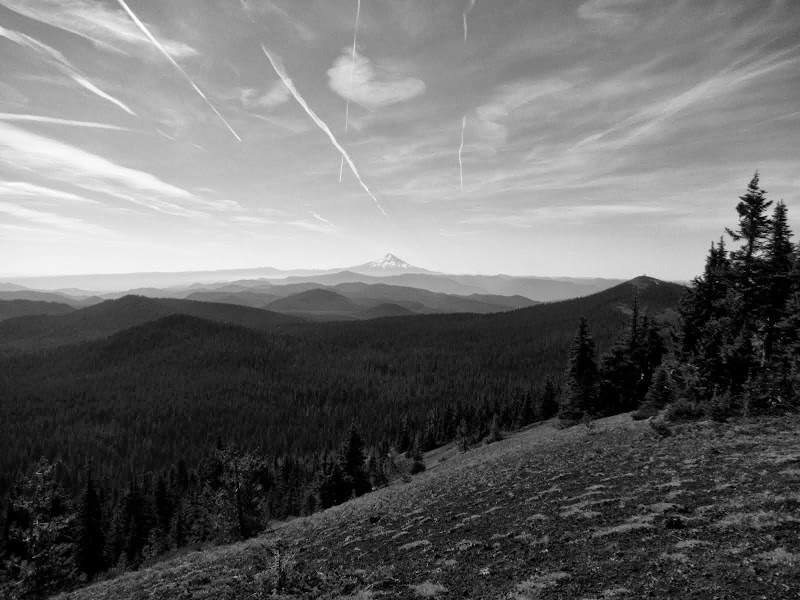 Adams to the N, 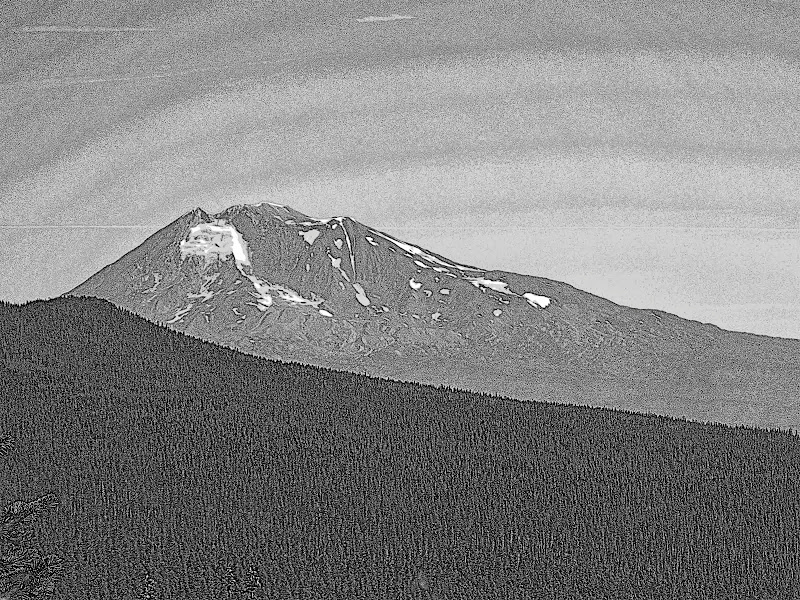 Red Mtn with its LO to the S, 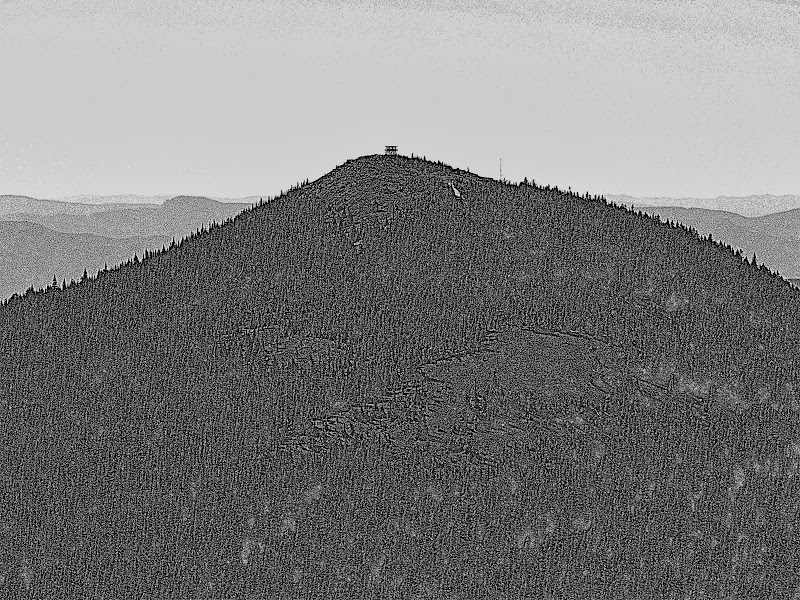 and Three Corner Rock (arrow) to the W. 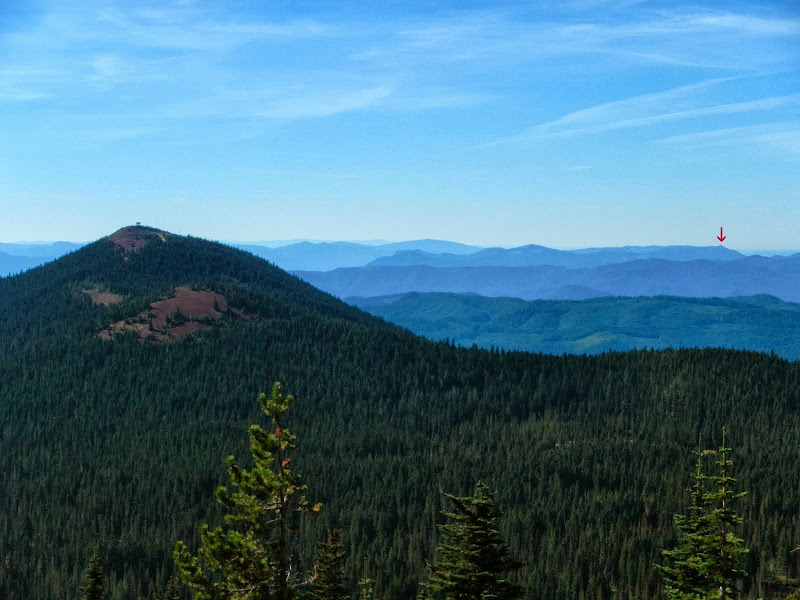 There were more mushrooms, 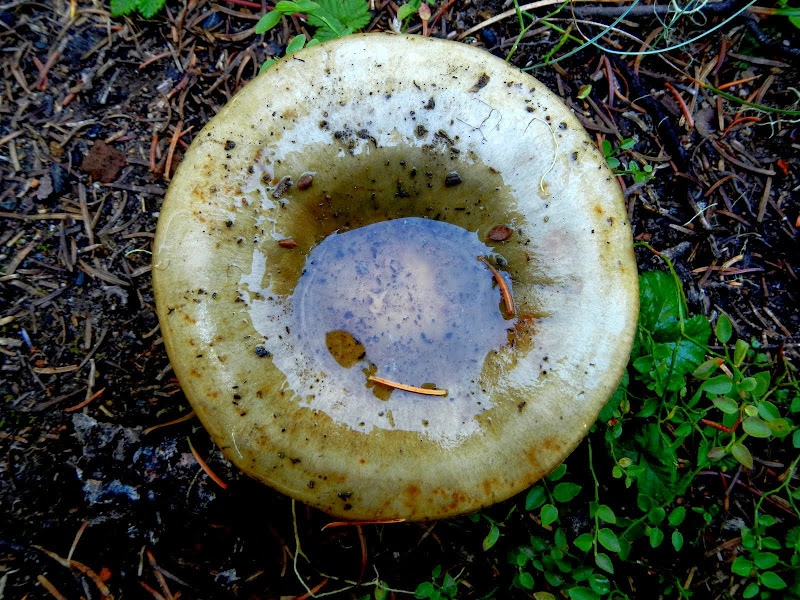 on the way to the Race Track, 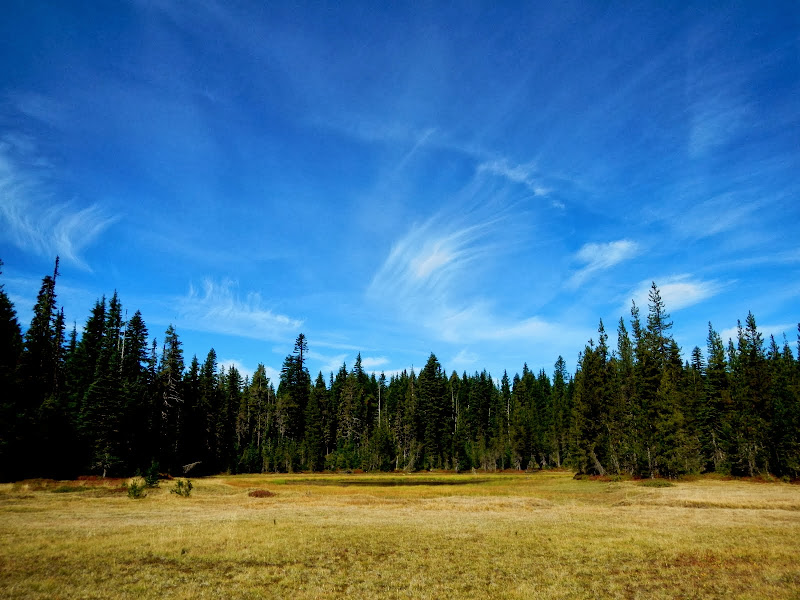 decorated with contrails for air traffic into Seattle. 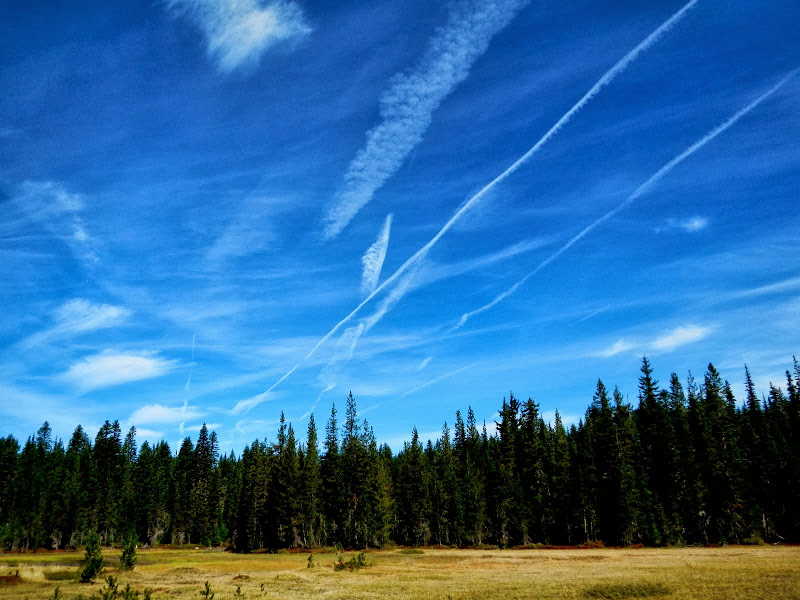 Then it was more ‘shrooms 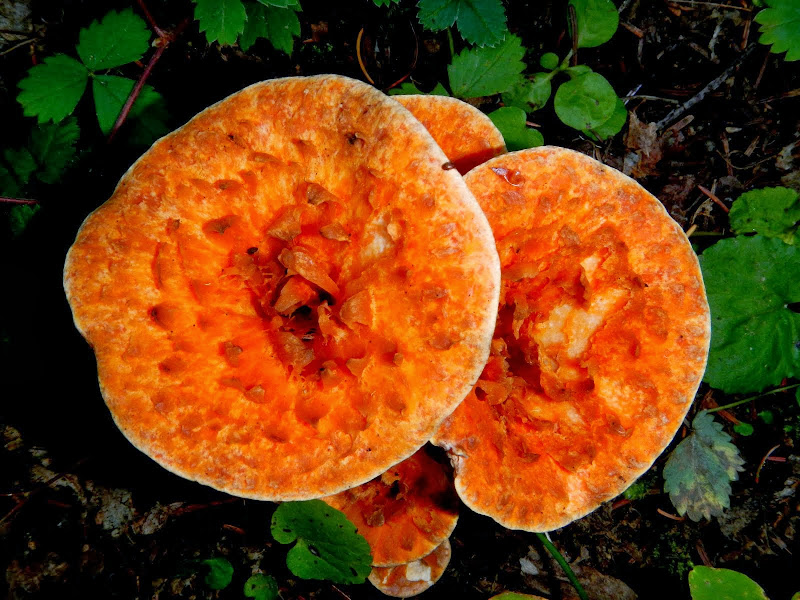 along Trail 171 back to the TH. A short (8.5 mi, 1500’ EG) but fun loop on a clear, sunny, crisp, breezy, bug-free day – the best! Sometime in February, the memory of this day will become a source of inspiration to hold on until Spring. 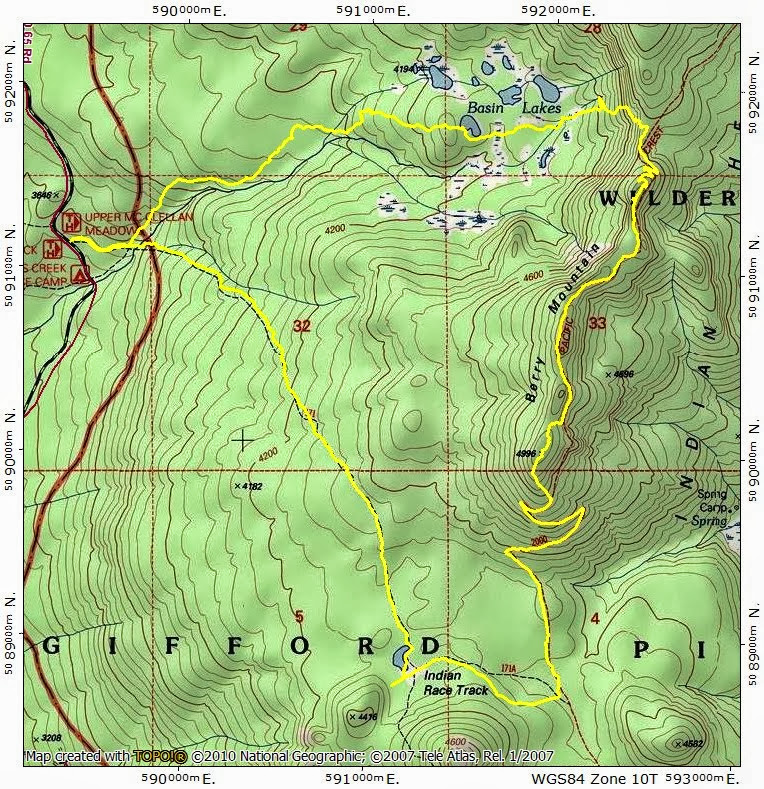 Neat! Another lesser-known GP spot! Very nice, indeed. And yes, I'm totally envious that you had the flu -- I was impossibly stuck at work yesterday, and could only look out the window and daydream... sigh...

Thanks for reporting on this loop again, VanMarmot. Gifford Peak Way is essentially abandoned but not hard to follow. The hike takes in some great Indian Heaven sights and is included in Matt Reeder's Off the Beaten Trail.

It seems to be the season for Gomphus floccosus. I am seeing them everywhere.
Top

Indian Heaven is #1 on my late season "hope I can get there on a nice day" list.