This was a special trip for me: one of my first hiking memories is camping for three or four nights at Bays Lake with my family twenty years ago, when I was eight. Everything is a fuzzy, though I do remember it raining torrentially for an entire day while my big brother read to us in our overcrowded tent, then waking up the next morning to a sunny, swimmable lake and suddenly full tarns everywhere.

For whatever reason, I hadn’t been back since, even though in the last few years I’ve rediscovered backpacking as (something of) an adult. So it seemed high time to go back and say hello. We decided to enter via the Whitewater Trailhead, largely because our little Honda probably couldn’t manage the roads up to Breitenbush. We got a late start, arriving at the trailhead around eleven Friday morning. There were already thirteen cars there, and several arrived while we were getting ready to head out.

I’d heard that this is the least scenic approach, and was ready for an uneventful amble through some nondescript woods. But the beginnings of Fall color were unexpectedly gorgeous: 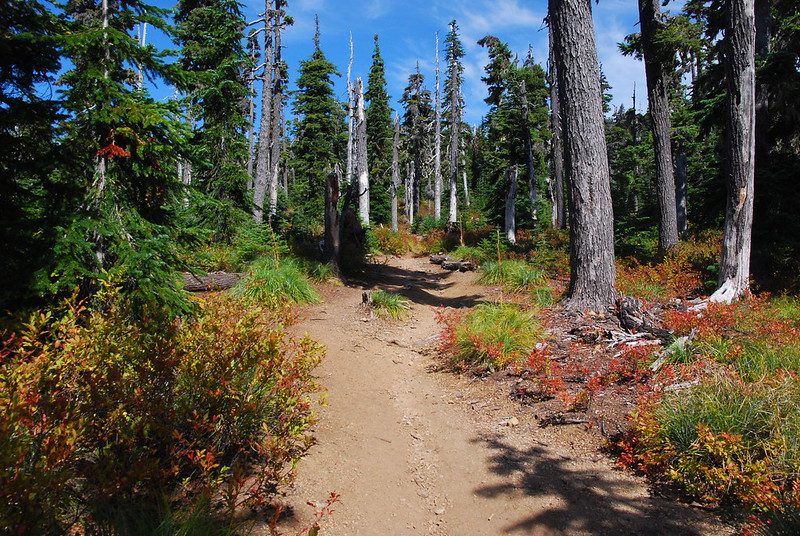 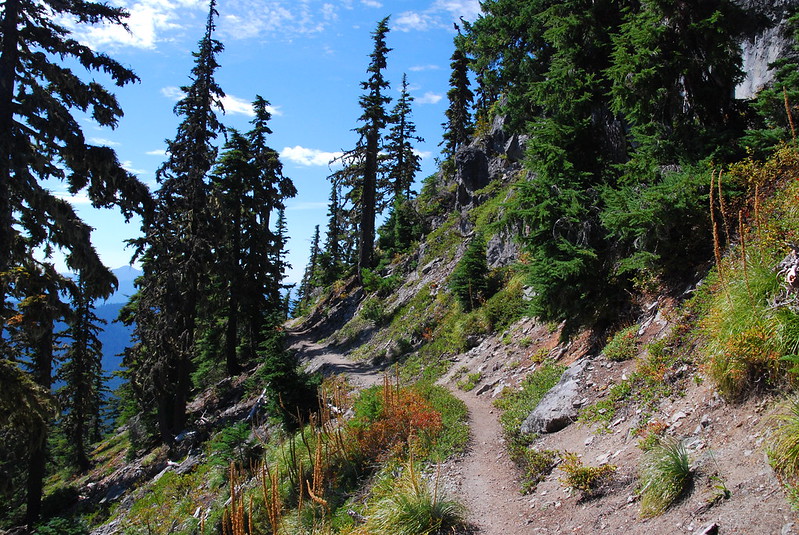 Things open up considerably once after around three miles, providing the first full views of Jefferson. 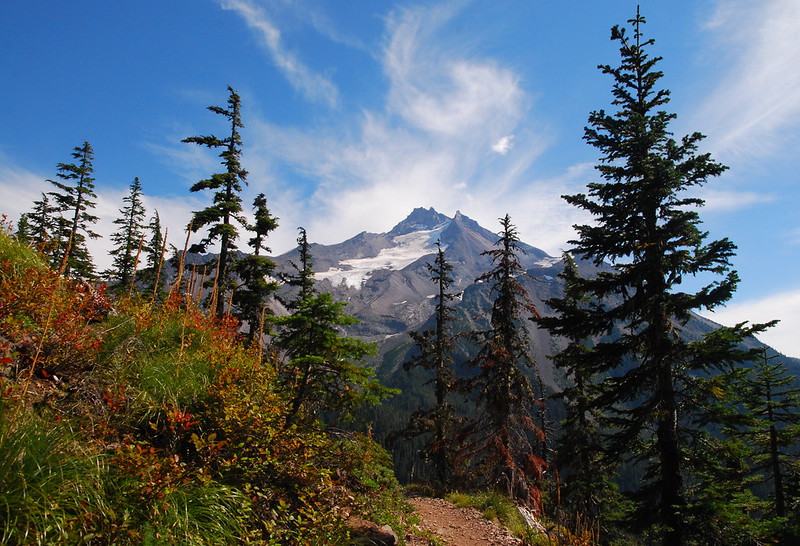 We went quickly up the rest of the trail, to the PCT junction and into Jefferson Park proper. Camping is only permitted at designated campsites, which aren’t necessarily all that easy to find. There’s a maze of trails spurring off the PCT, with little indication of which lead to sites and which don’t. The Forest Service has posted dozens of “Closed for Rehab” signs, which narrow things down a little. 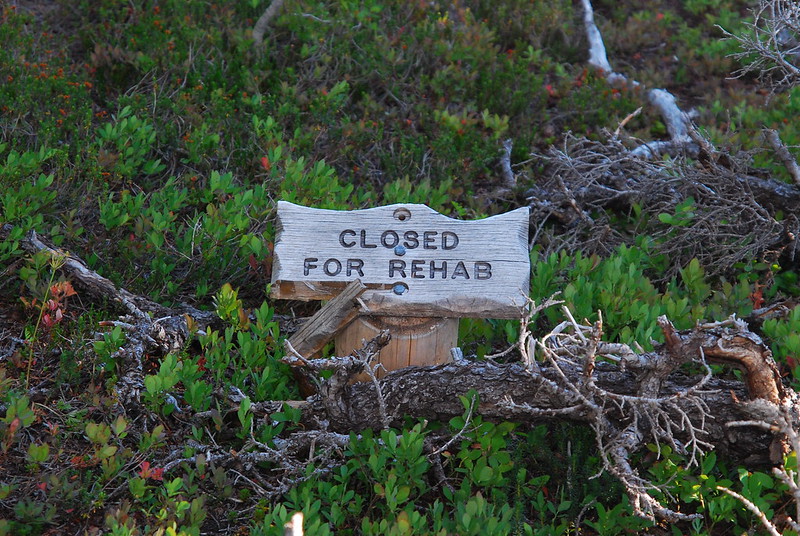 There’s also a map of official sites posted at the trailhead, which is enormously helpful, but I get the impression a lot of people don’t take a close enough look. 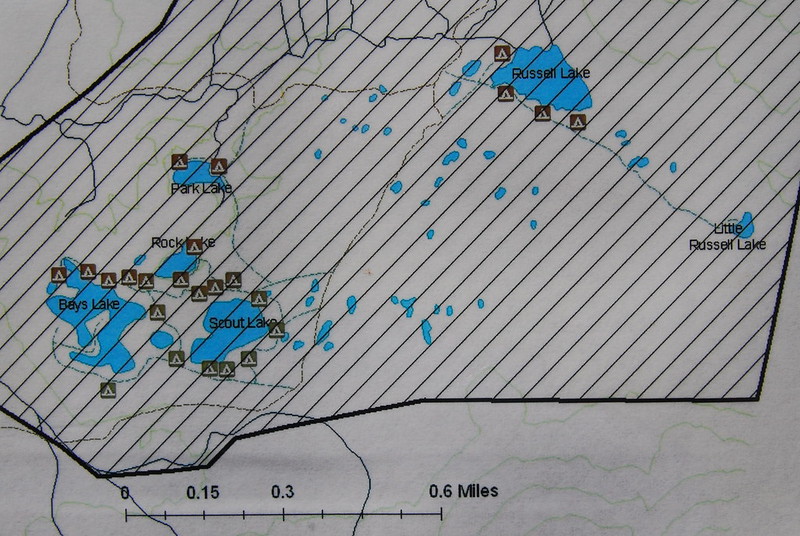 We eventually found a spot on the south side of Scout Lake, and settled in for a little swimming and a mellow evening. 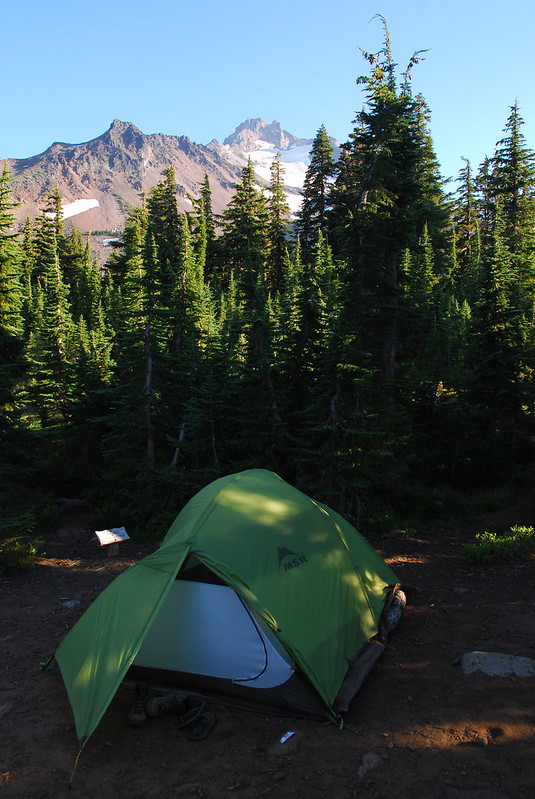 The area’s obviously seen quite a bit of traffic this summer. We packed out dozens of bits of trash that were scattered around our campsite, including a few cans and some aluminum foil in the fire pit, which we disassembled. It was obvious too that a number of people had tried to hang their food, with mixed success. 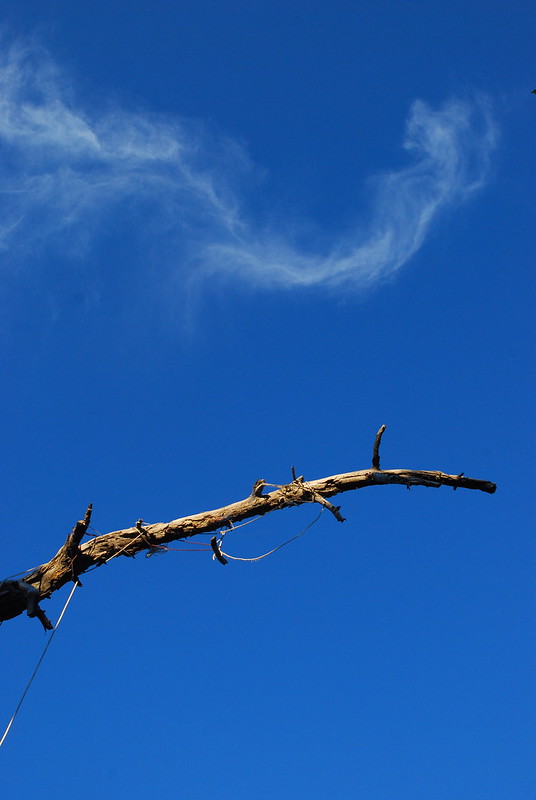 But, the signs of overuse notwithstanding, it’s still just an incredibly pretty area. Here’s the view from cocktail hour, looking toward Scout Lake and Park Butte. 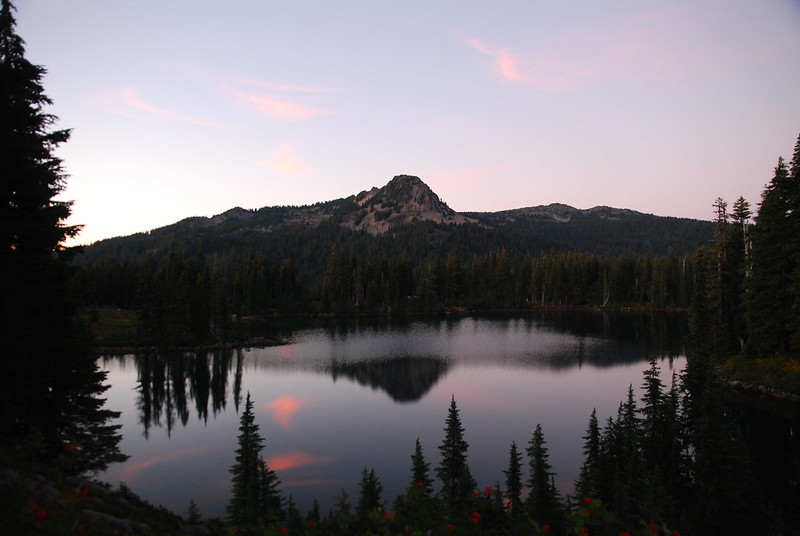 As it got dark we saw a disconcerting number of campfires around the lake, and worse heard people breaking branches from what I assume were live trees for firewood. Seriously? I’m not sure what it is that makes people think that their enjoyment of the wilderness is somehow enhanced by burning down part of it.

Several times that night groups trundled through our camp looking for open sites, the latest a loud group around midnight that spent a minute or two pointing their headlights into and around our tent looking for a trail. The confusion is understandable, though I do wish there were a way of making the sites, and the trails between them, more obvious.

The next morning we took a stroll through the Park and up Park Butte. The Park was full of those tarns I remember from when I was a kid, now at various stages of evaporation. 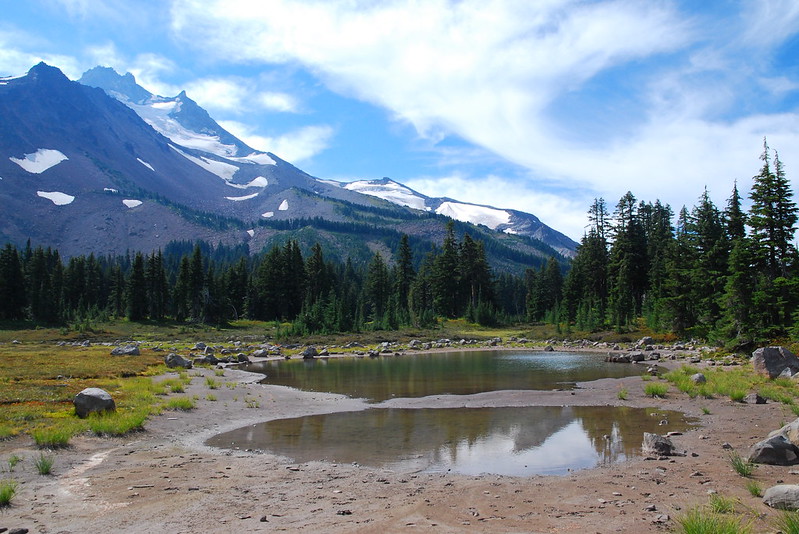 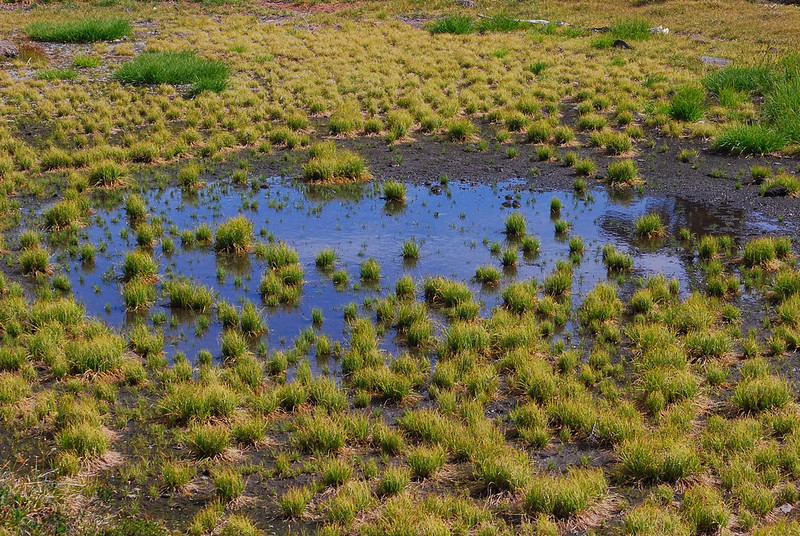 The flowers are mostly gone at this point, replaced by sometimes-gorgeous husks. 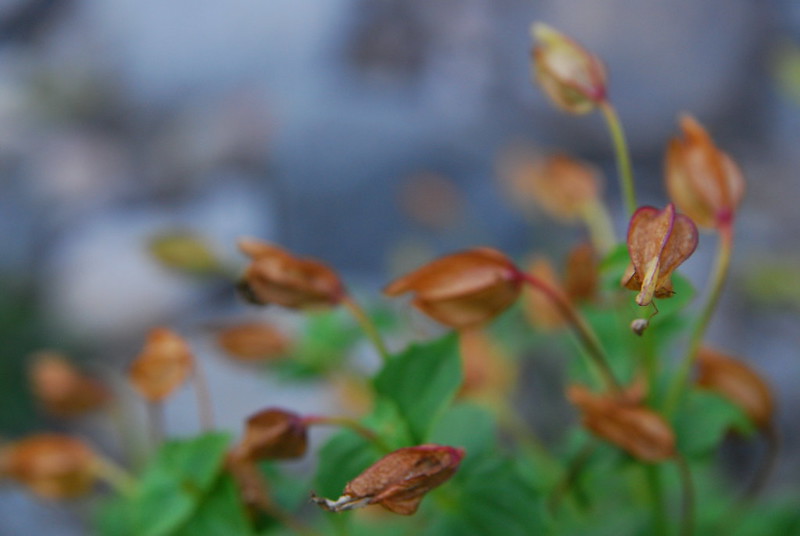 There were a few still blooming by the streams. I’m not sure what either of these are. (I really ought to learn more about wildflowers one of these days.) 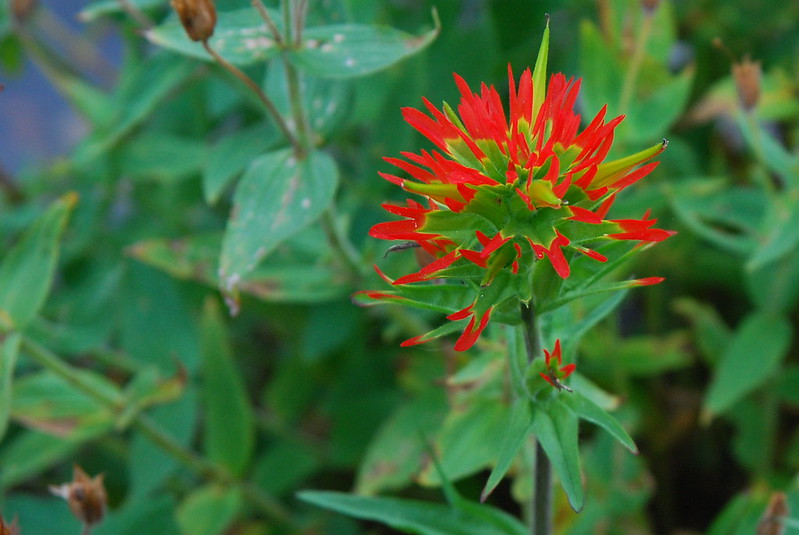 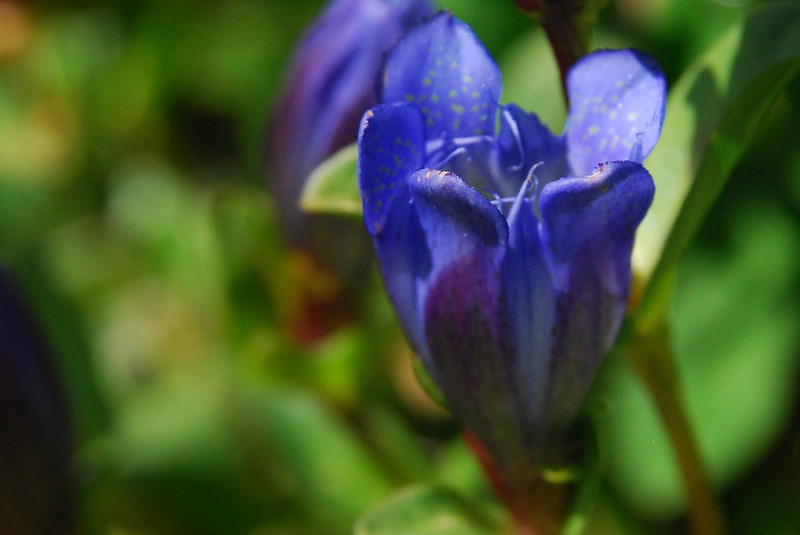 Around halfway up to Park Ridge, there’s a pretty stream, which would be a great source of water if you needed it, and just beyond that there’s a patch of some of the densest huckleberries I’ve ever seen. 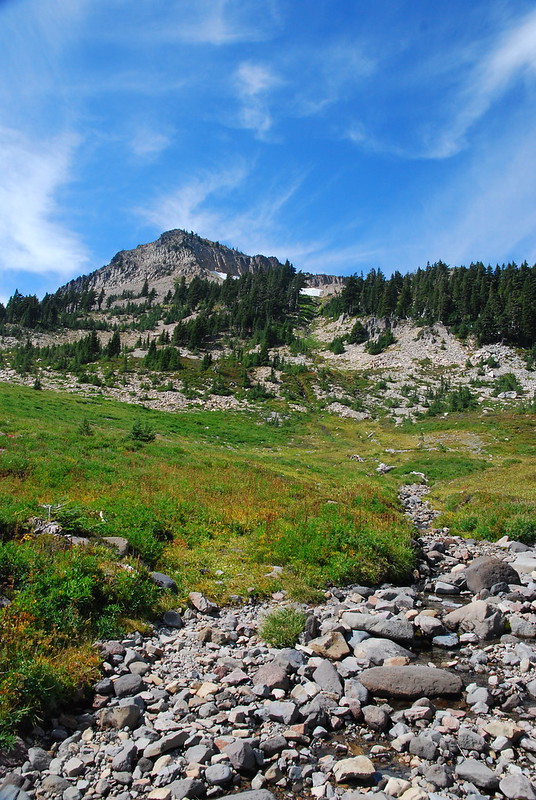 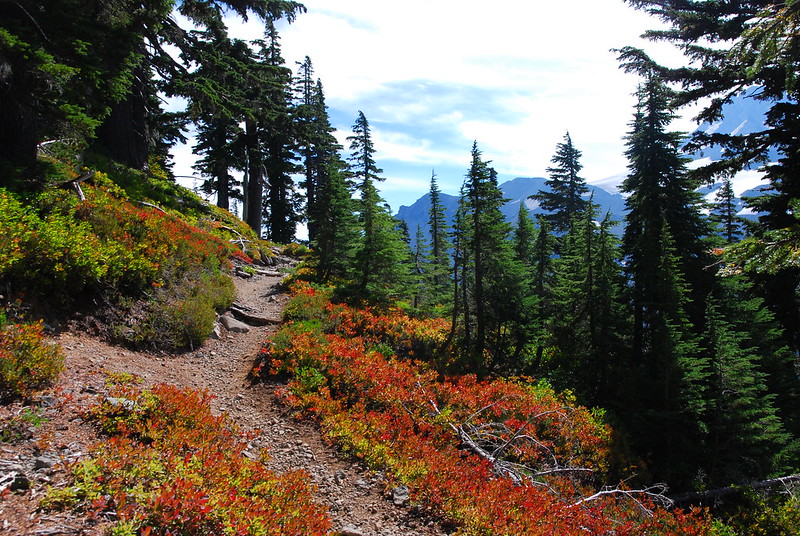 The huckleberries are still going strong! The occasional berry did taste a little past its prime—containing something almost like a primitive huckleberry wine—while others were just coming into ripeness. We saw a couple in the bushes with a massive ziplock bag filled with berries. You could kill hours here eating. We nearly did. 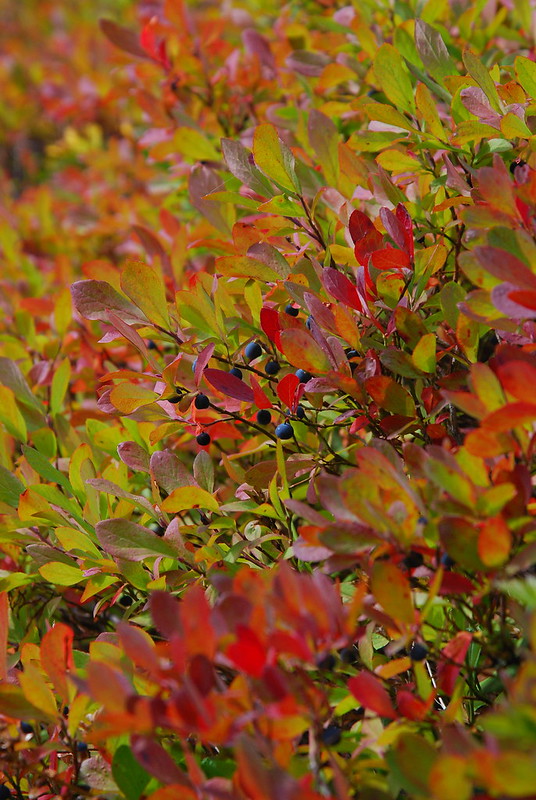 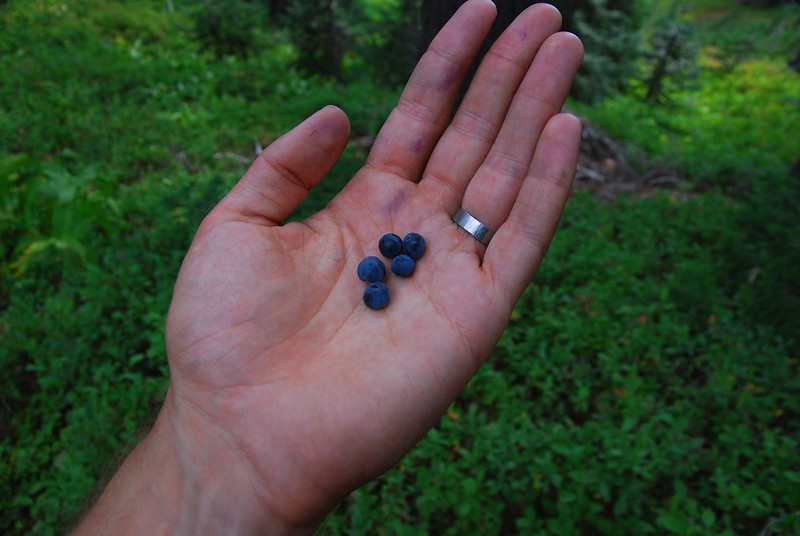 A little further up there’s a small stream and a hidden campsite. (We didn’t get a picture of the campsite, but it’s just across from the stream, on the east side of the PCT.) If you wanted to get away from the hordes at Jefferson Park but didn’t want to brave the possible exposure up on Park Ridge, this would be an excellent option. 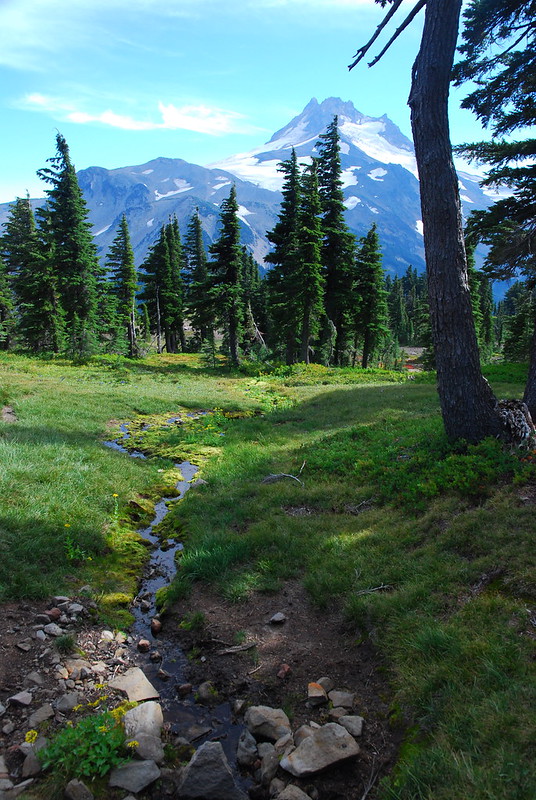 The PCT up around Park Ridge is really pretty—some day I’ll have to figure out a way of getting up to that other trailhead. 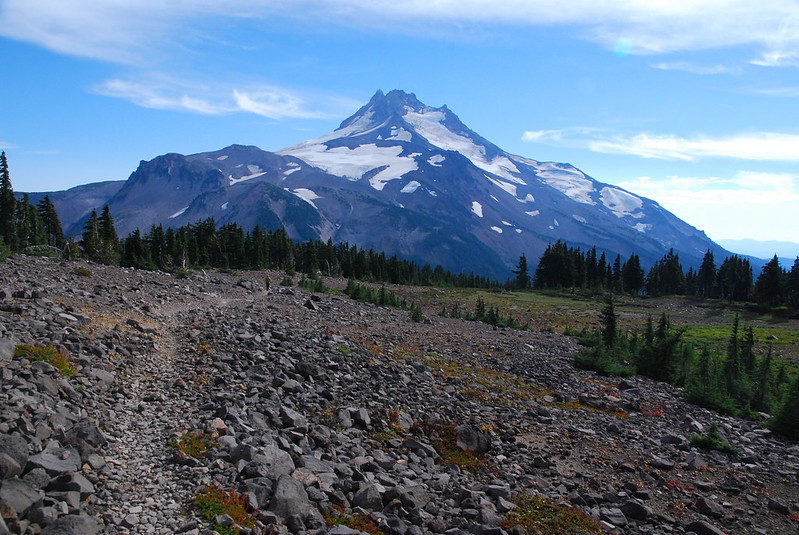 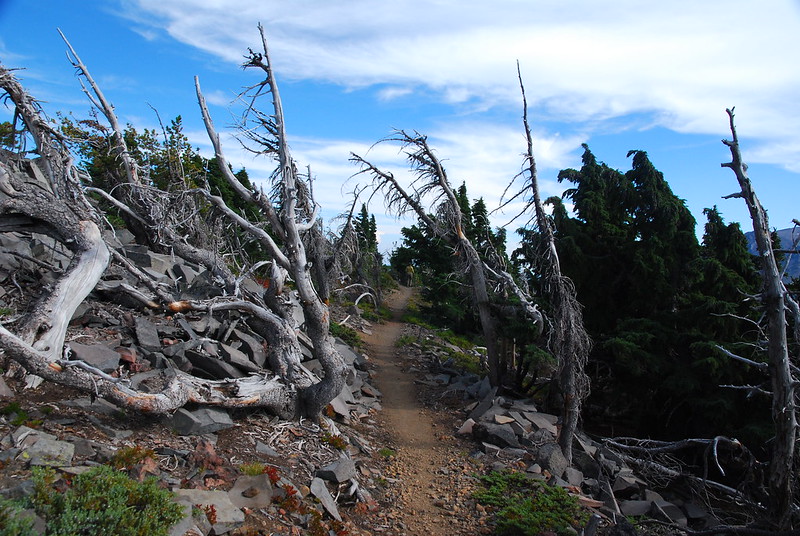 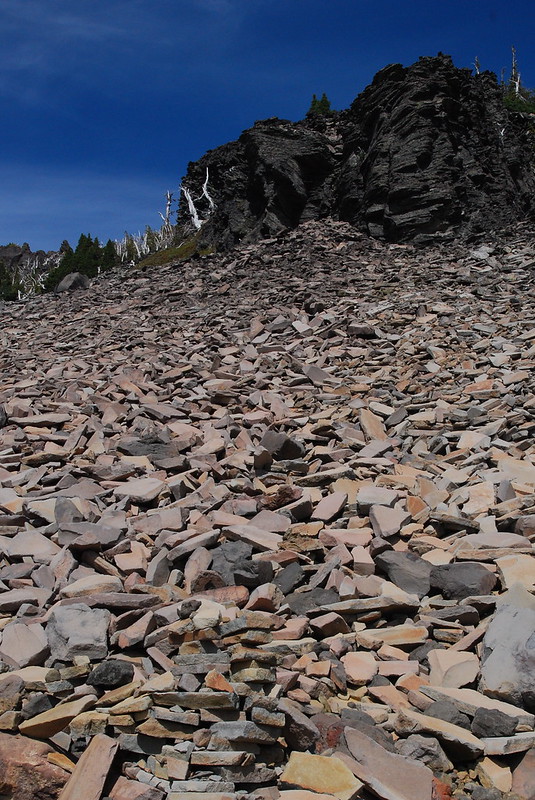 And, of course, the views are spectacular from the top of Park Ridge, no matter which way you look. 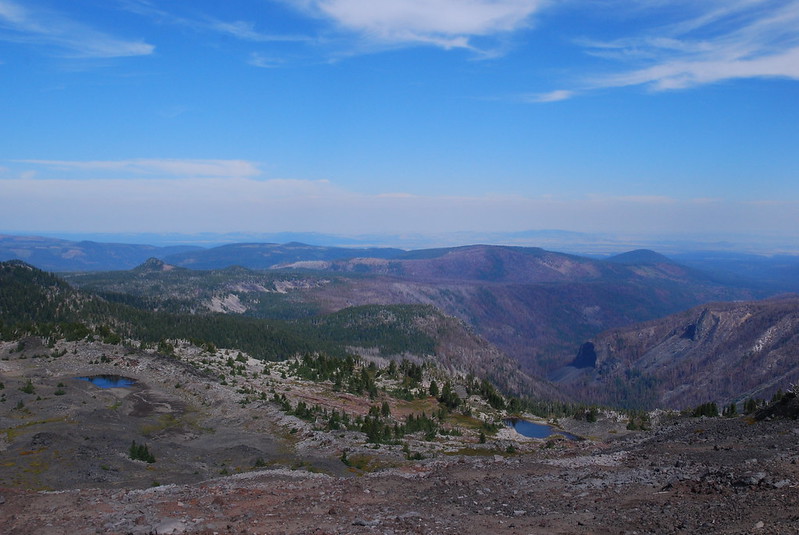 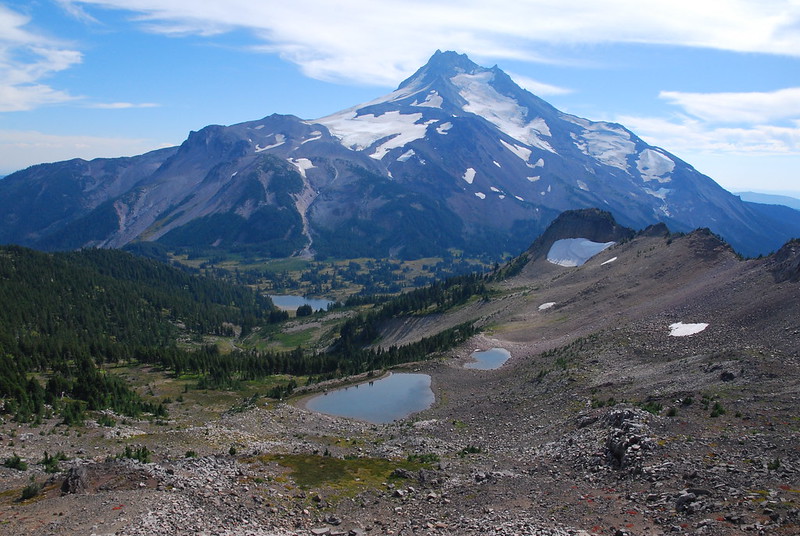 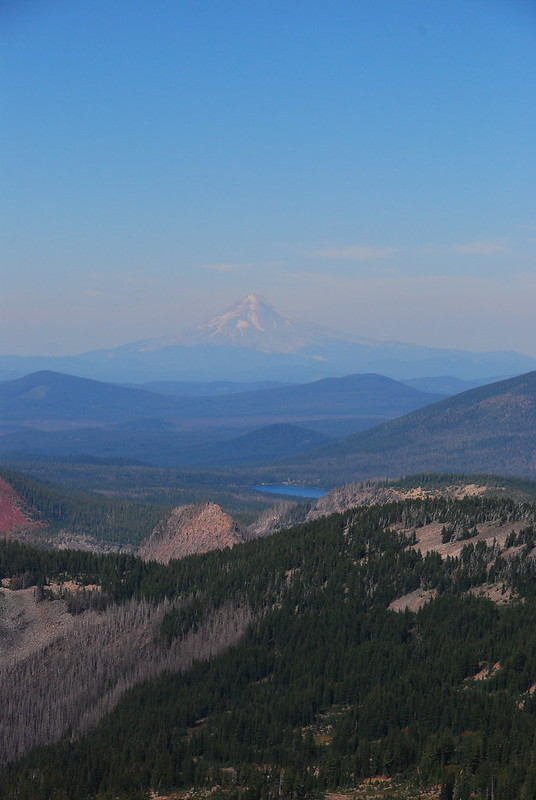 If you continue west-ish on the ridge a little past where the PCT cuts north, there’s a small geological marker, and great views of some oddly semi-circular hill (anyone know what that is?). 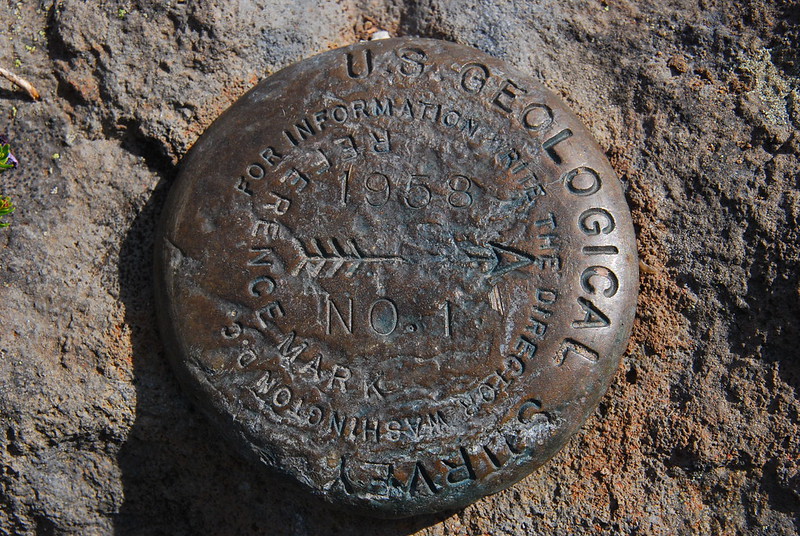 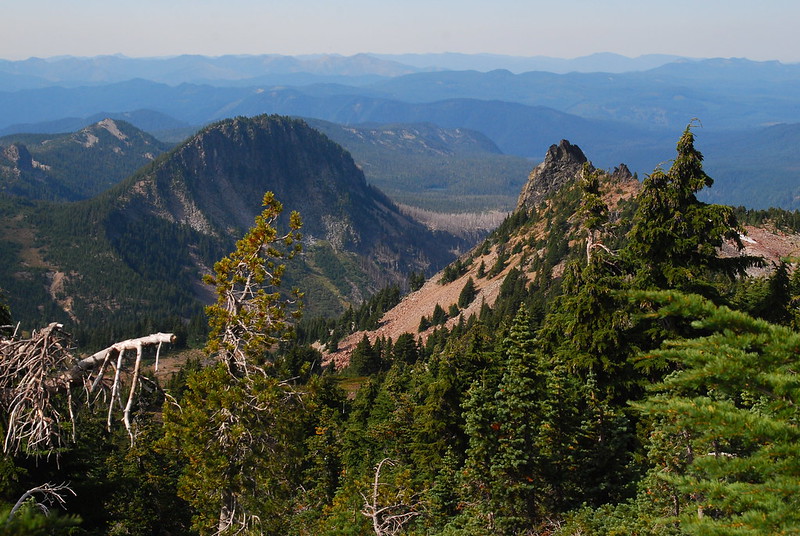 We headed back down to our campsite with ample time for a little afternoon swimming. We were expecting the weather to get a little dodgy Saturday night, but things stayed completely clear for the sunset. With the exception of a few—literally: around nine—raindrops Sunday morning, the weather was completely cooperative until we got back to the car early Sunday afternoon. 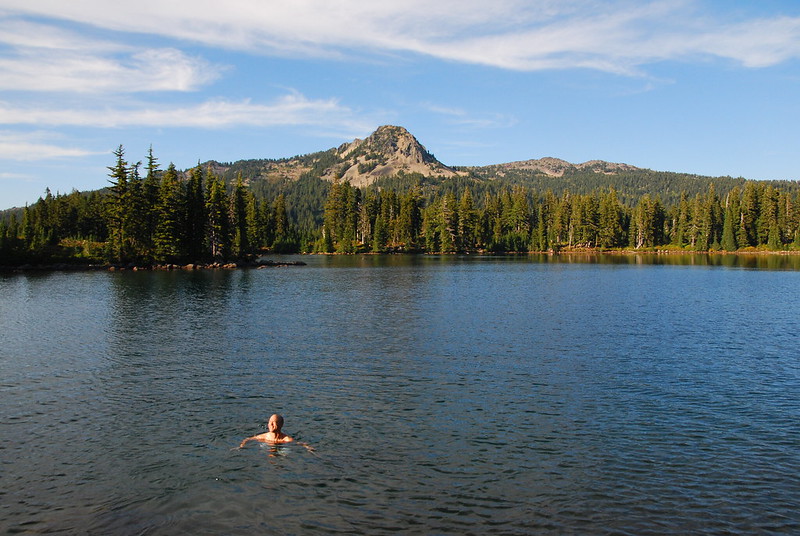 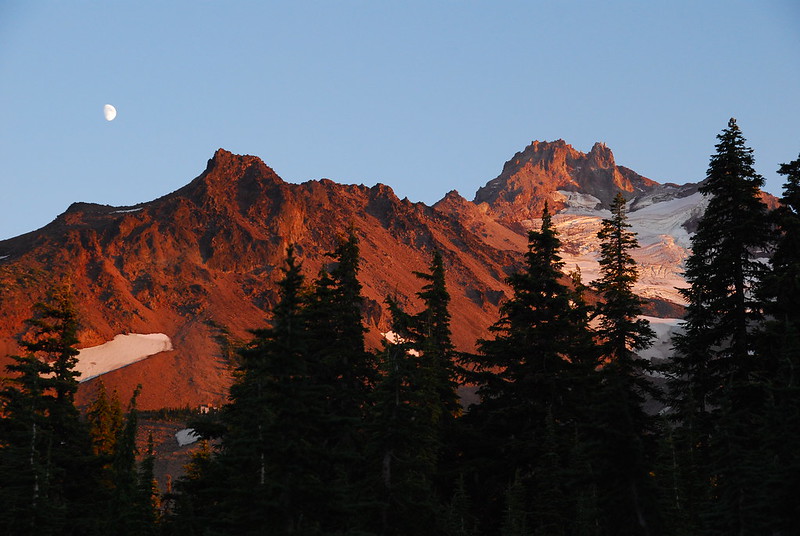 It was a fantastic trip into a fantastic area. It was a little more crowded than I remember it from when I was a kid, and definitely more overused. I hope I can go back in twenty years to find the area still intact.
Robin

great photos - going up there for the first time this weekend - looks like the weather wont be quite as nice.

is there any place to camp before jeff park? - the whitewater creek crossing (from map) looks good. Is that a heavily impacted area as well?

I know what you mean regarding crowds now vs 20 years ago. I was on the Rock of Ages trail in the gorge this summer and counted 15 people on the upper end - in the 80's I never saw a soul up there in many trips.


Thanks for the report and photos - I will live vicariously until saturday!


Z
Joy in the universe, and keen curiosity about it all - that has been my religion.
- John Burroughs
Top

was up there sat and left early sunday. have similar pics as yours. also saw that wildly unsuccessful bear-hang on that scrag-tree above the camp, kind of a hoot. we accidentally walked into a few people's camp areas.

i can't believe so many areas of trail did drugs and had to go to rehab. ok terrible joke. anyways if the FS really wants to rehab those things they absolutely have to put a sign on BOTH sides of it. There was a few times my wife and I ambled along a trail thinking we were good and then realized we walked to the back of one of them.

as for 'less pressure' camping, there are areas in the park merely a stones throw away that few people seem to camp at, takes some exploring and thinking but plentiful spots on durable/non vegetated surfaces, all within about 10 minutes of the lakes. but you're not camped next to a lake. What I find oddly comical is that the FS has established sites well less than 200ft from the lake. I thought that was just a general LNT/wilderness standard but apparently not here.
Feel Free to Feel Free
Top

Beautiful shots! Makes me want to get up there.
Hikin' Log
Top

The flowers are (red) Indian paintbrush and (blue) Blue Gentian.

Thanks, Robin - great report! Your scooped-out mountain is Dinah-Mo Peak, with Bear Point behind it. That area (in the view to the NW) is one of the most remote anywhere in the northern Oregon Cascades -- and quite spectacular. Great glacial features in there! (Dinah-Mo included).


Aardvark wrote:is there any place to camp before jeff park? - the whitewater creek crossing (from map) looks good. Is that a heavily impacted area as well?

There's an obvious spot right off the trail around two and a half miles in. I guess it'd do in a pinch, though it's not very pretty and there's absolutely no privacy. There are also a couple side trails after the Whitewater crossing and before Jeff Park that might be promising (and probably less crowded than the Park itself), but we didn't explore them.
Robin

We were on the other side over by Shale lake. Not too many
blueberries but the colors were coming on. Also was
on the top of Mt Jefferson on Saturday looking down on
Jefferson Park.

Wish I had time to see this area this year.
Top

Thank you Robin and Water for the camping tips!
Joy in the universe, and keen curiosity about it all - that has been my religion.
- John Burroughs
Top

rick6003 wrote:We were on the other side over by Shale lake. Not too many
blueberries but the colors were coming on. Also was
on the top of Mt Jefferson on Saturday looking down on
Jefferson Park.

Wish I had time to see this area this year.

Hey Rick! I was down Jeff Park at Bays Lake that weekend too. Funny to think you were up on top looking down while i was down there looking up...

Great weather on both days, though windy on Sat night and a little cloudy on Sun morn.
"The top...is not the top" - Mile...Mile & a Half