Last week, I took a 7-day, 90-mile hike through some of North Cascades National Park's finest scenery. I started at Ross Lake, hiked up Little Beaver Creek, over Whatcom Pass, down Brush Creek to the Chilliwack River, up the river to Copper Ridge, along the ridge and back to the Chilliwack, back over Whatcom Pass, over Beaver Pass and down Big Beaver Creek to Ross Lake. Here's the track: 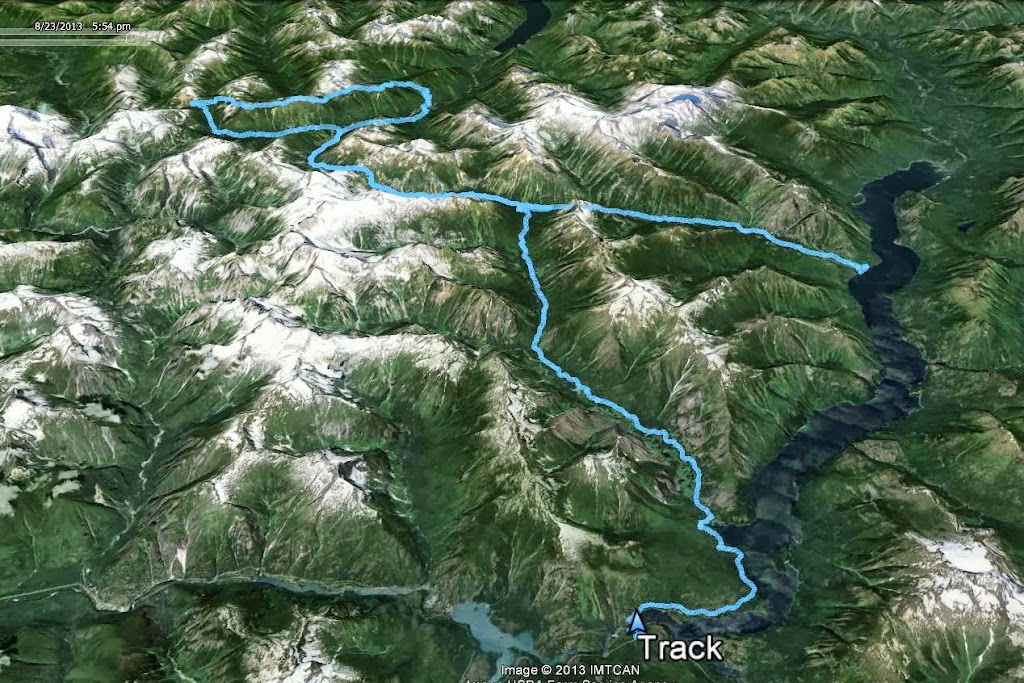 And here's the route in Hillmap and GPSfly.

In the Park, backpackers are generally limited to designated campsites, for which a permit must be obtained prior to the hike. So, on Friday, Aug. 16, I left Portland at 5 a.m. and drove to the ranger station at Marblemount, Wash., where I got my permit. I got most of the sites I'd planned on, but had to tweak my route a bit based on site availability. I then drove to the Ross Dam trailhead, from which a 1-mile trail takes you down to a boat landing on Ross Lake: 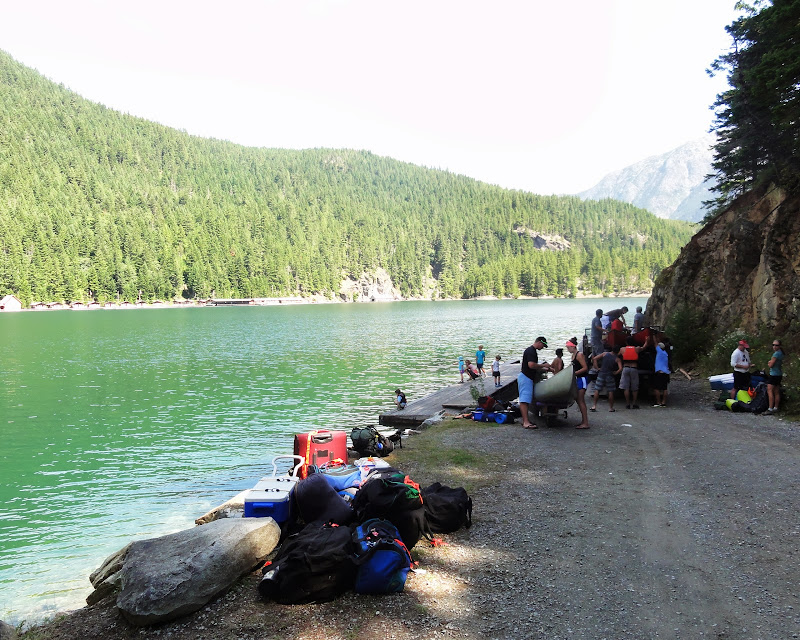 Ross Lake is a 23-mile long hydro project, which impounds the Skagit River and provides power for Seattle. It's a popular destination for groups who canoe or motor to boat-in campsites, as well as for people staying in the floating cabins at Ross Lake Resort:

Ross Lake Resort runs a water taxi service, and that's how I got to my trailhead on Little Beaver Creek, which is about 15 miles north of the landing and is accessible only by water: 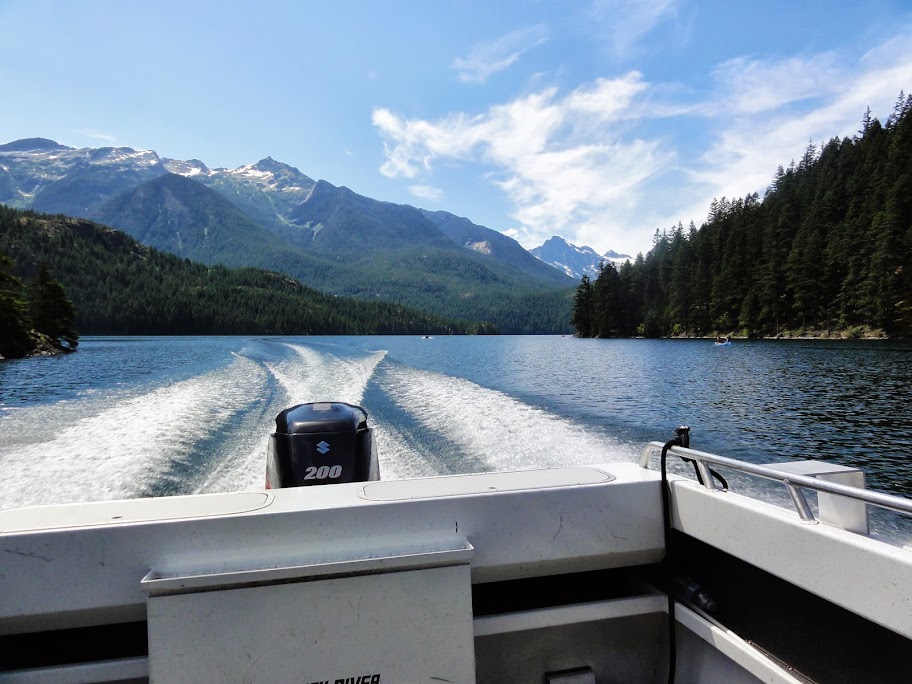 I started my hike at 1 pm, carrying a 36-lb pack, which included 7 days worth of food in a bear canister. The trailhead is at 1600 feet, and the trail quickly climbs a few hundred feet and then stays fairly level at about 2000 feet for the next 12 miles. There were a few views of the lake before the canopy closed in. Here's a view south to Jack Mountain: 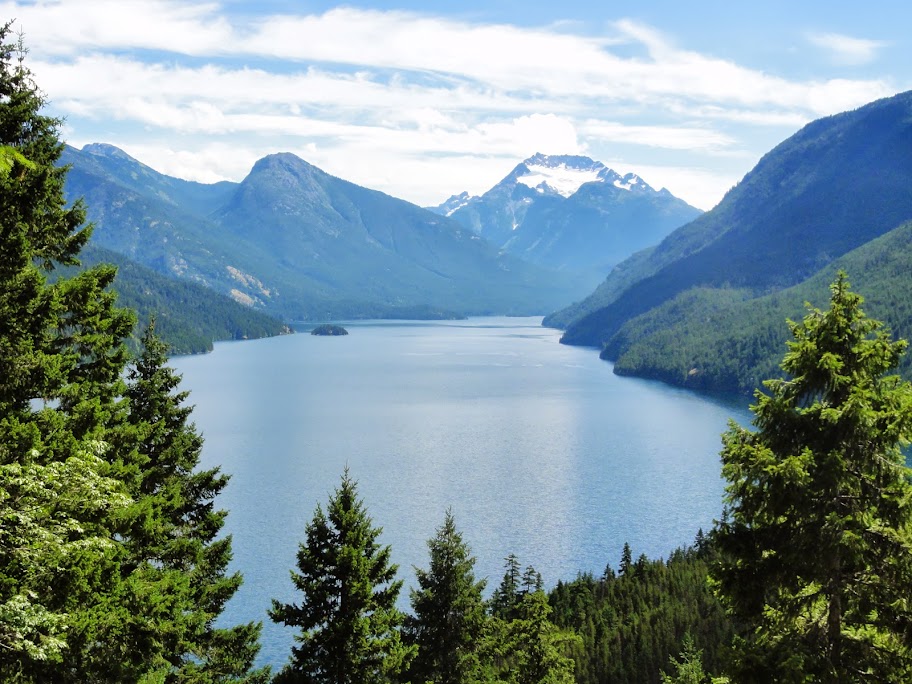 I hiked 5 miles to Perry Creek Camp, where I was the only camper. I had seen no other hikers that day. On Day 2, I quickly passed Perry Creek Shelter, about a quarter mile west of the campsite: 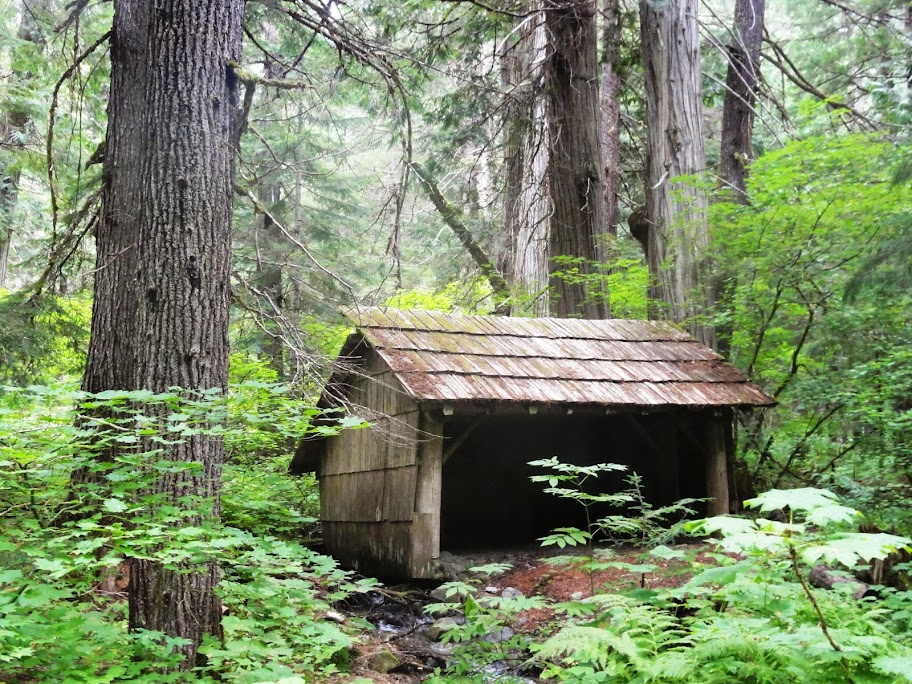 You can't camp in these shelters, but I imagine they'd make a nice refuge in a downpour. This one looked pretty weathertight.

Little Beaver Creek is, for the most part, a pleasant forest walk. There's some fine fungi... 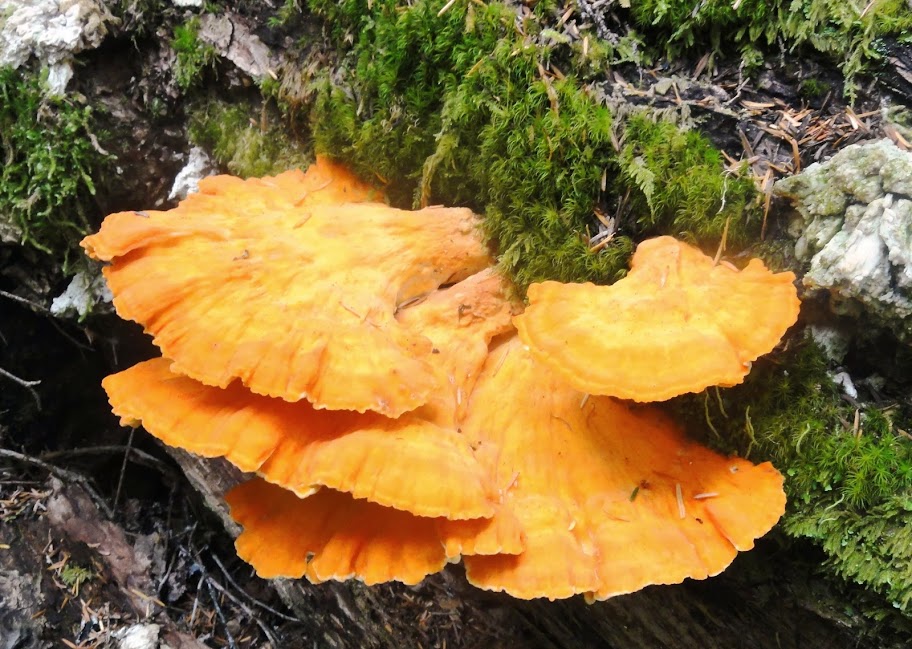 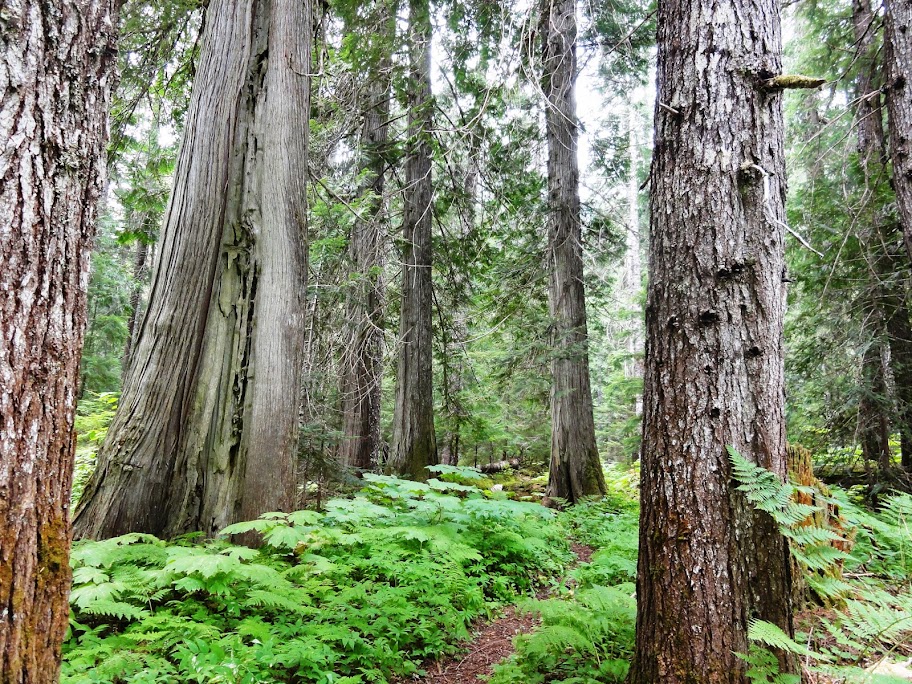 ...and several spots where the trail follows along the tops of fallen logs:

Past Perry Creek, the trail gets pretty brushy in spots, and even more so once you pass the junction for the Big Beaver Trail, at about 11 miles. There are only a few spots where the creek is visible from the trail:

As you climb a bit higher, the views start to open: 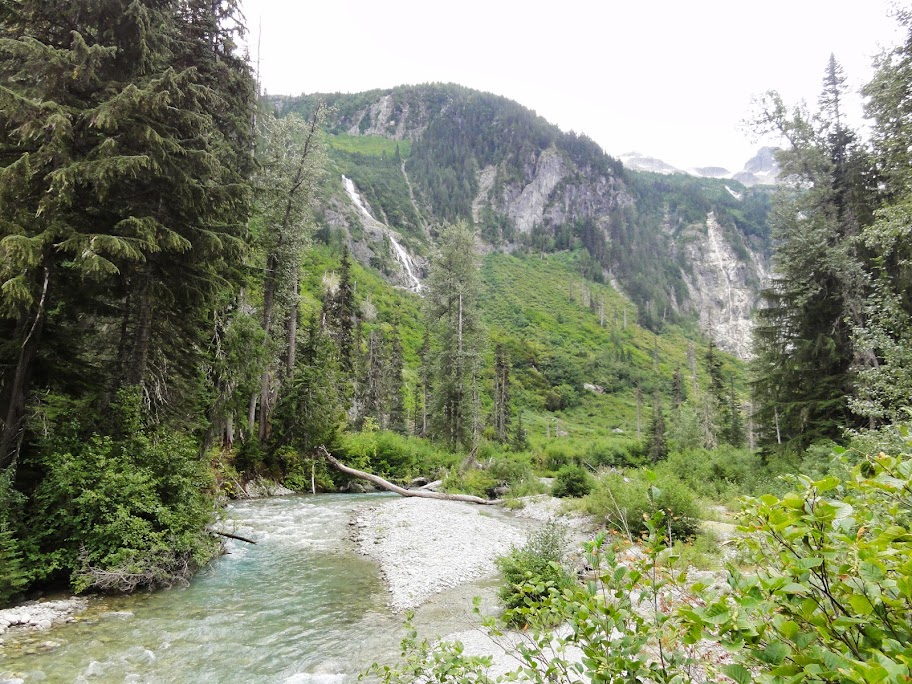 And then, you make a steep 3000-ft ascent on well-built switchbacks to Whatcom Pass, where the views really open: 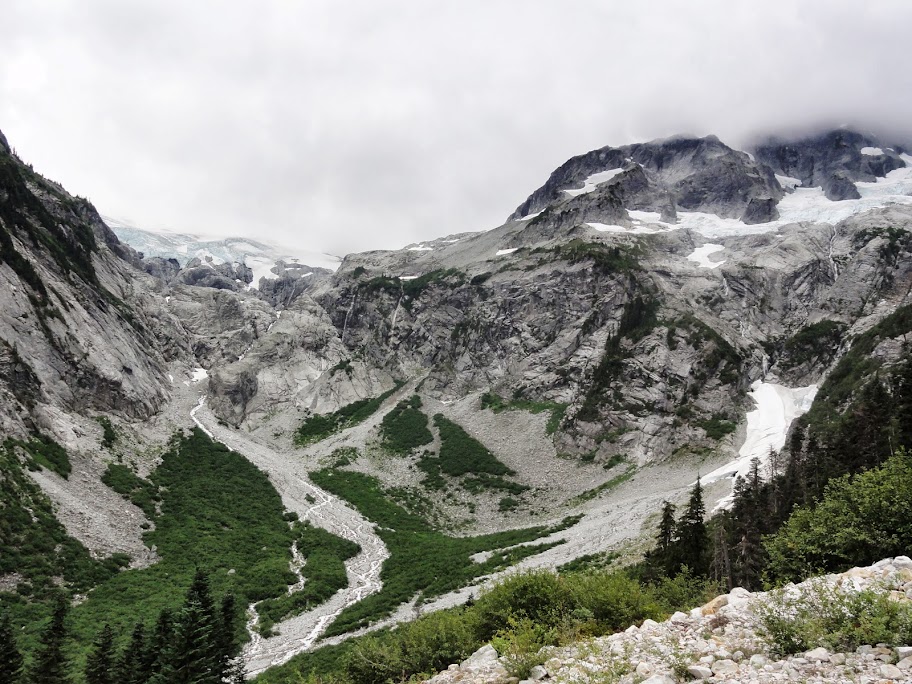 I stopped at Whatcom Camp the second night, having logged about 15 miles for the day, without seeing a single other hiker. The camp is at 4900 feet, just west of the pass. There was one other party camped there.

Day 3, I dropped down Brush Creek to the Chilliwack River. The Chilliwack flows north into British Columbia, where it joins the Fraser. I turned up the Chilliwack, and shortly came to this fine cable car crossing: 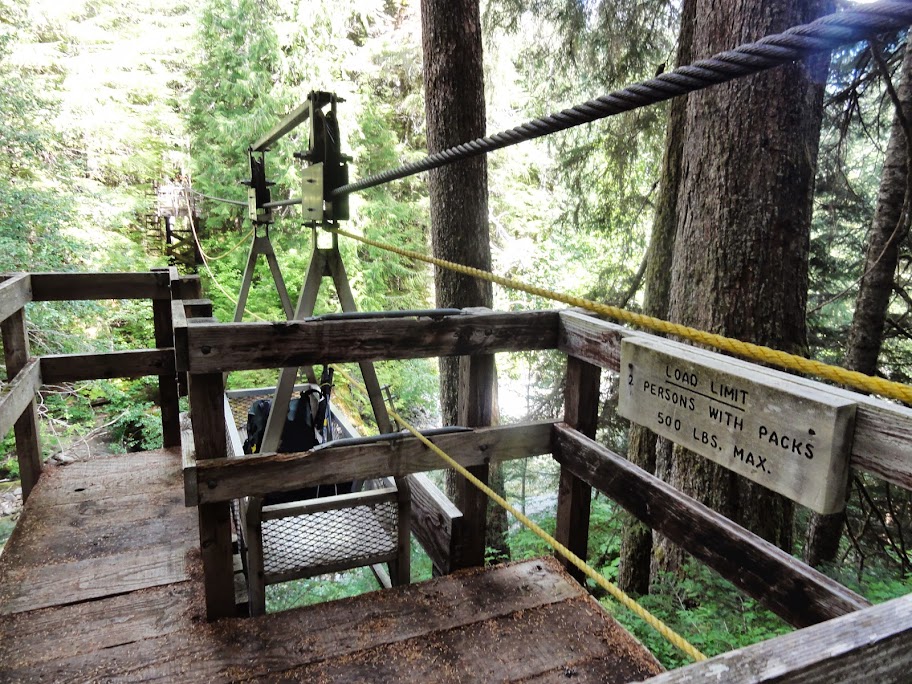 I thought it looked quite solid, and I enjoyed my ride. A park ranger later told me it was built in the 70s, and has received little maintenance since.

Eventually, I climbed to Copper Ridge, where the clouds were dramatic: 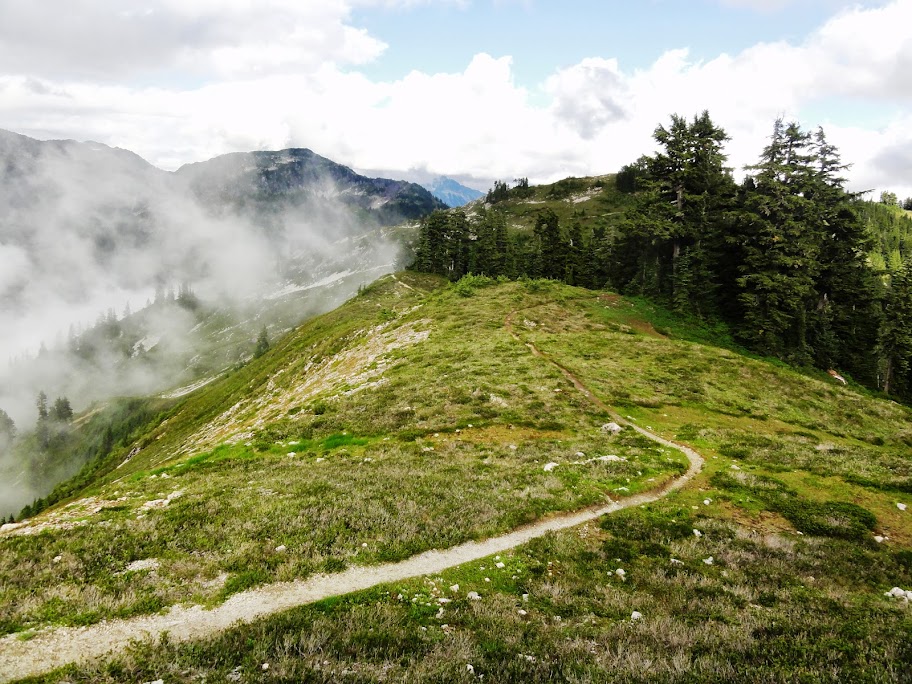 Copper Ridge is about 12 miles long, and ranges between 5000 and 6200 feet. It's a popular hike, which most people reach from the west, starting at the Hannegan Pass trailhead. After hiking 17 miles, my camp for the third night was Silesia, which is right on the ridge at 5600 feet. (Silesia, by the way, is also the name of a province in Central Europe.)

Silesia had no water source, and the nearest official one was .4 miles away, at Egg Lake. Fortunately, I found a trickle below a snow bank near the campsite that sufficed to fill my water bottle.

Day 4 was cloudy and drizzly, so I didn't get many of the sweeping views that Copper Ridge is known for. But there were a few nice scenes. Here's Egg Lake: 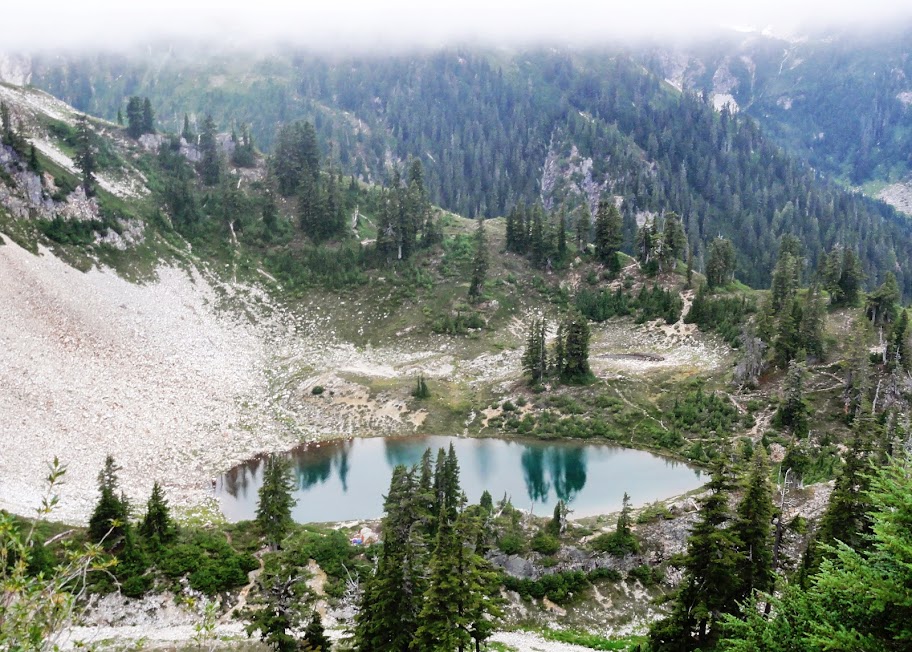 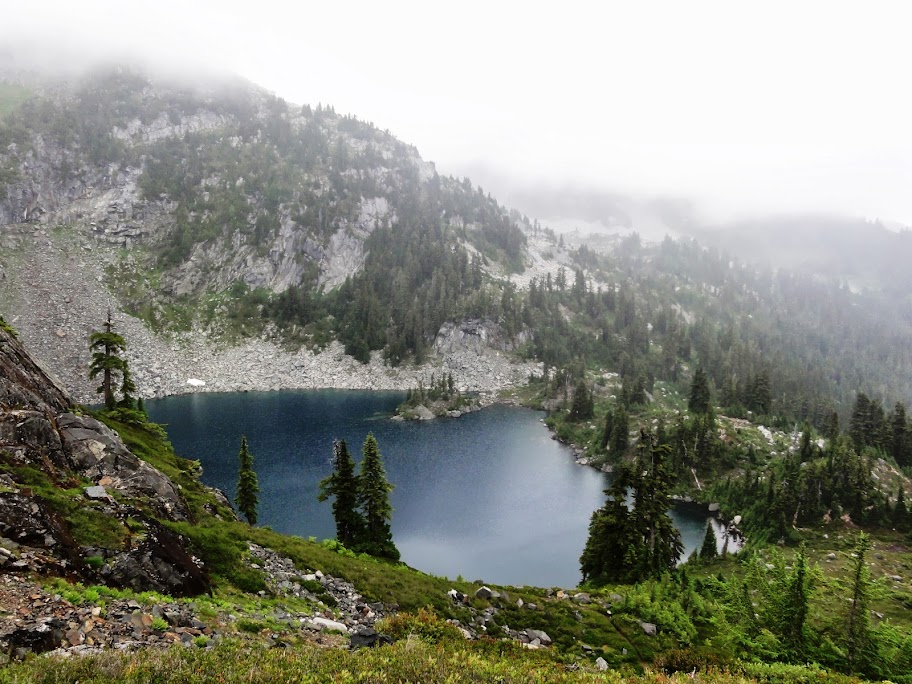 There were abundant ripe blueberries along the ridge: 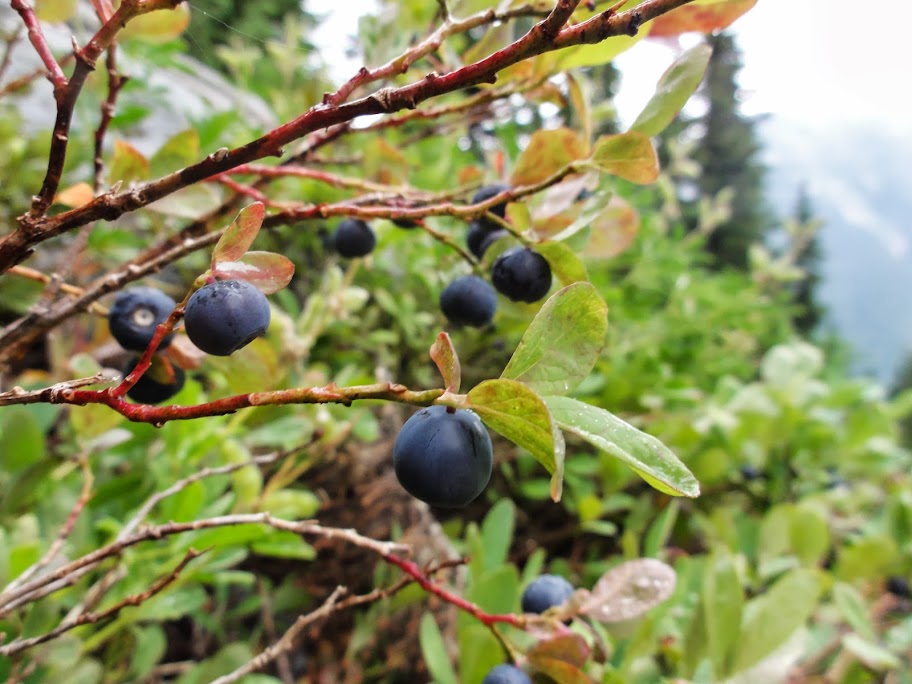 And occasional views into the Chilliwack Valley: 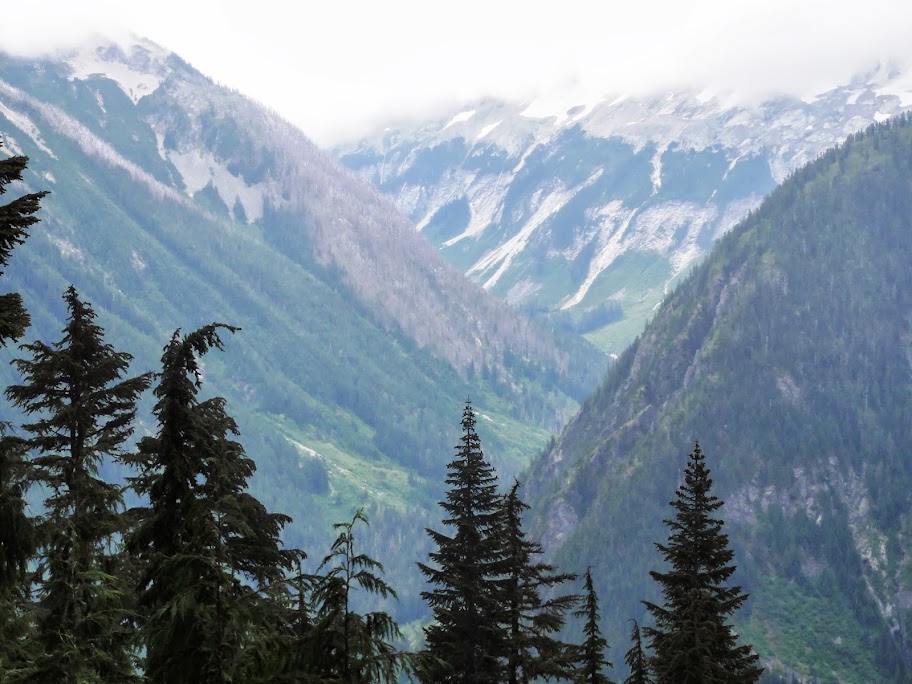 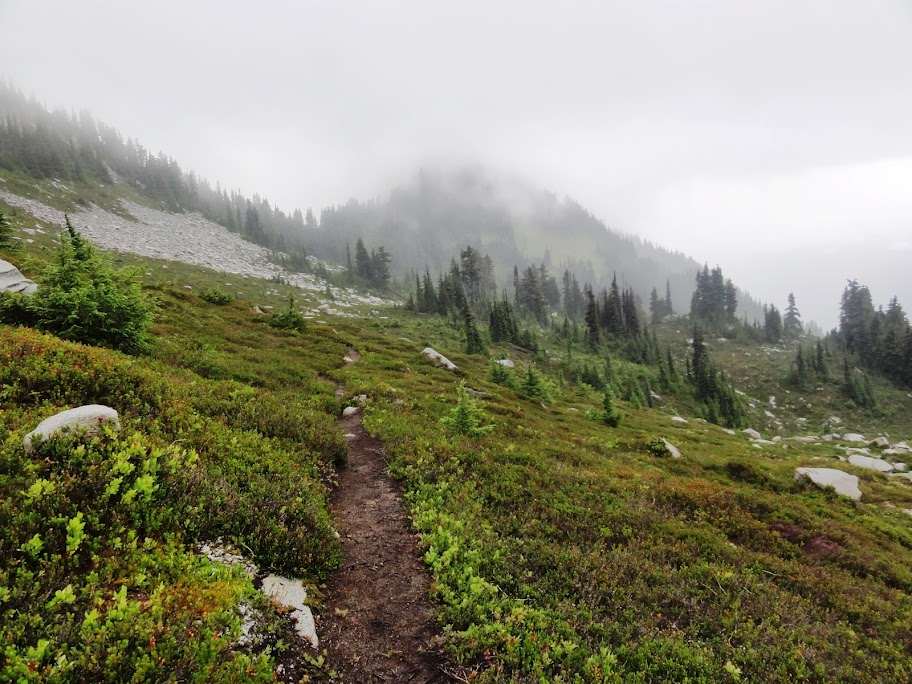 I passed a few other hikers along the ridge. In a talus slope, I encountered this little fellow, who was quite interested in me. He's a long-tailed weasel: 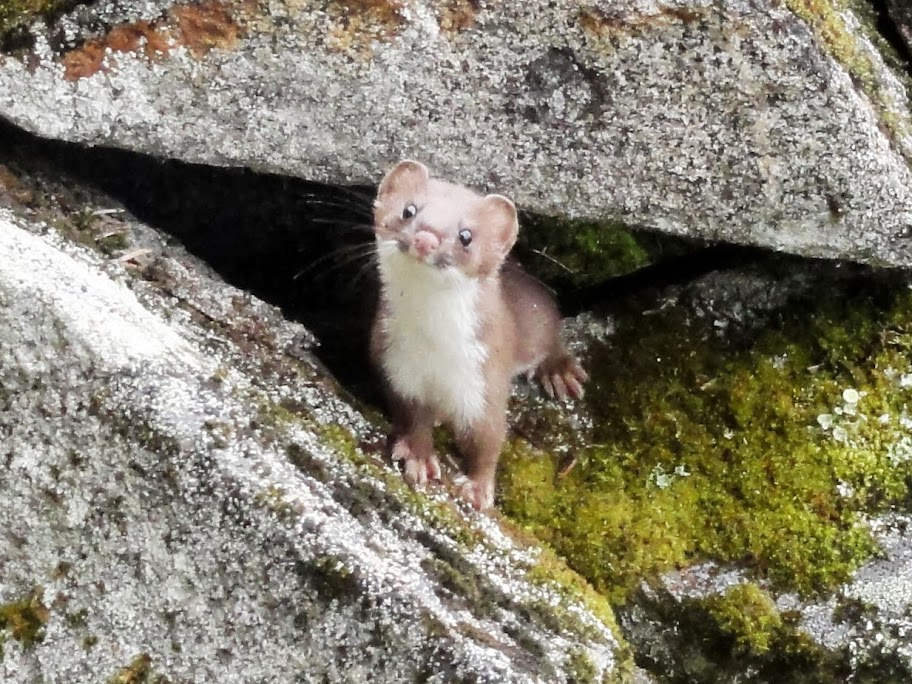 We stared at each other for a few minutes, and then he bid me happy trails: 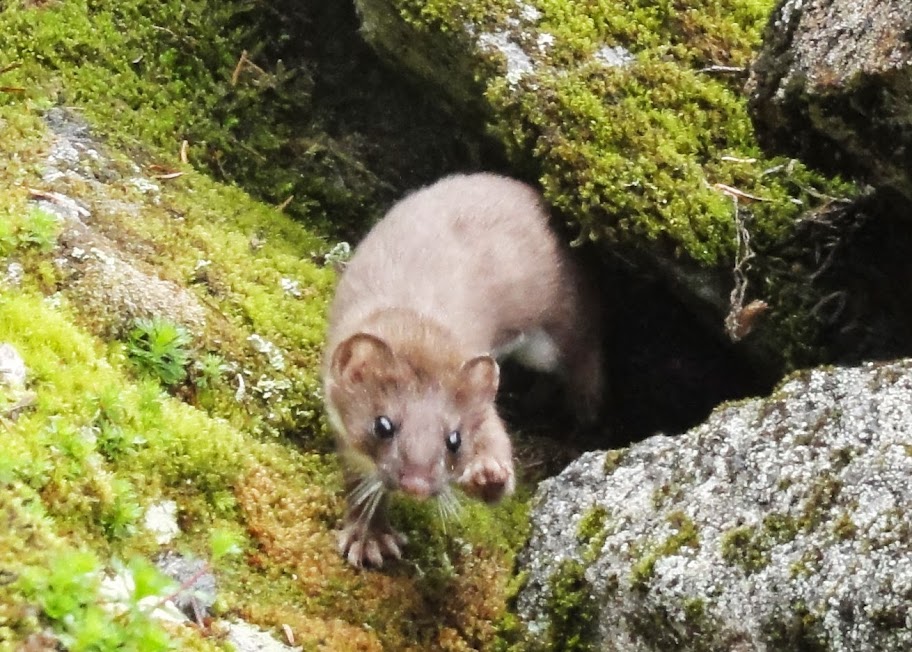 Next was a 4000-ft drop down to the Chilliwack River, where there was a wide, shallow ford. This was a high point of the trip, because the sockeye were running:

Here's one that's all played out:

Heading up the Chilliwack, I crossed a fine bridge at Indian Creek: 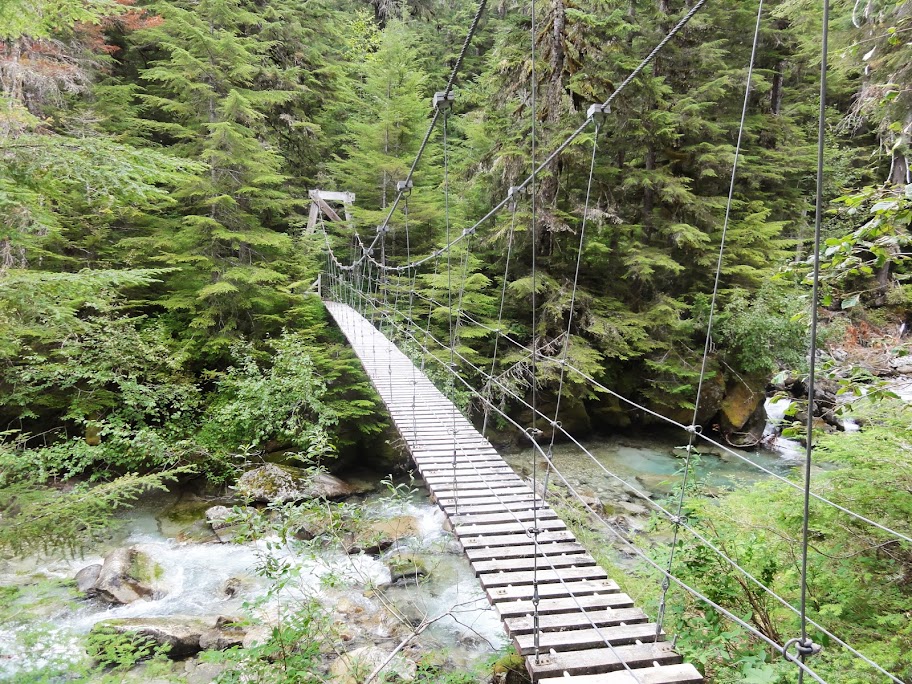 I camped the fourth night at Graybeal Camp, having walked 17 miles. The last few were rather wet, because the drizzle had soaked the brush along the trail, which in turn soaked me. Fortunately, I had dry clothes stowed away, and it didn't get cold that night.

Day 5, I headed back up over Whatcom Pass. On the way, I encountered a black bear crossing the trail about 30 feet ahead. He stopped and gave me a perfect pose, but got tired of waiting for me to get my camera aimed, and he continued about his business. So, this was the best shot I got: 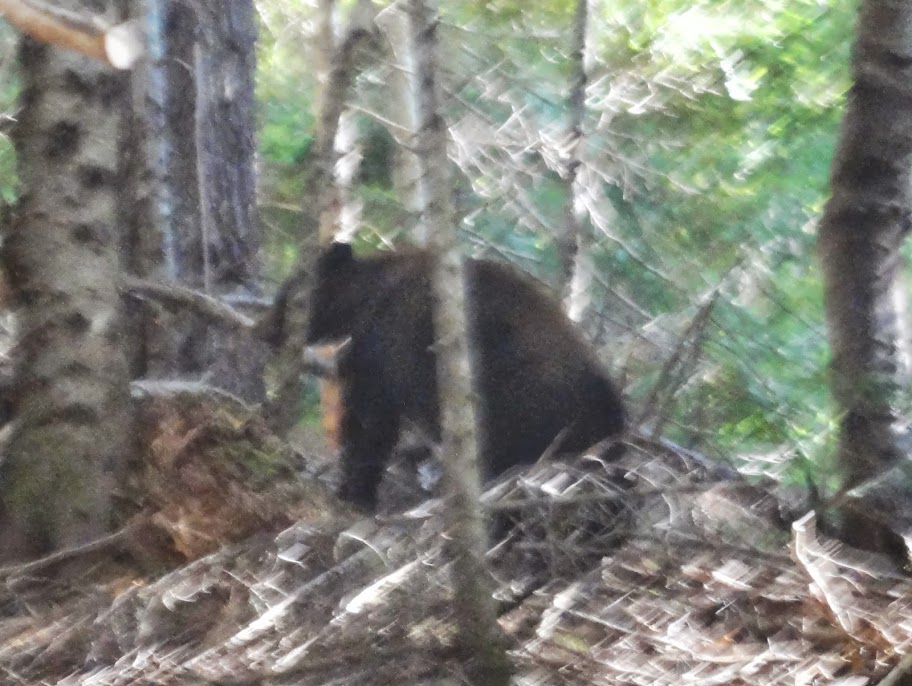 As I climbed the pass, the weather cleared nicely, and I stopped in a sunny spot for a while to dry out my socks. The view from the top was fine. There's a spur trail heading south at the top of the pass, which takes you to this view of the Challenger Glacier: 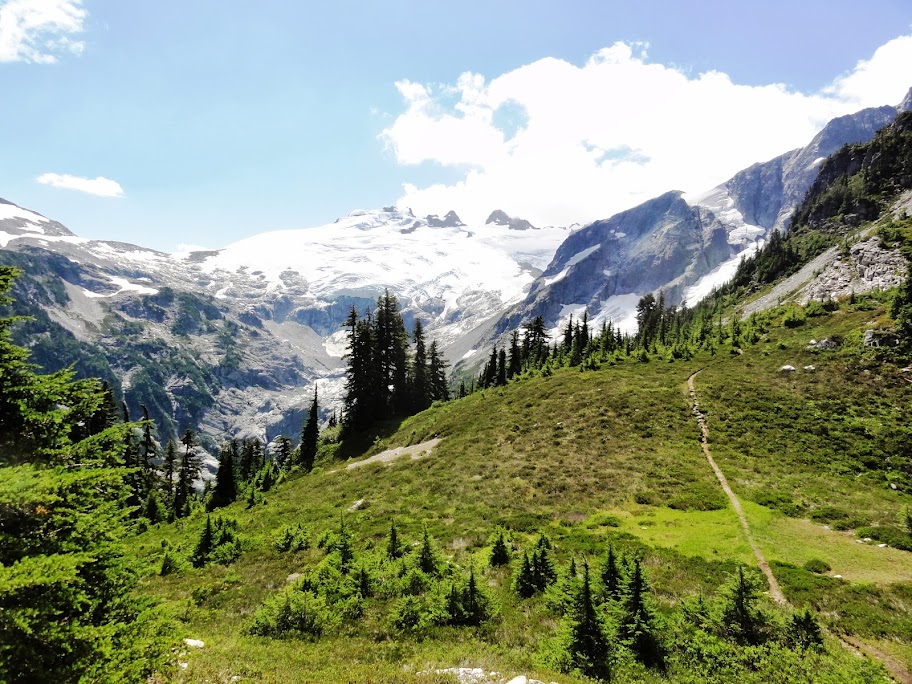 Here are some views of the Little Beaver valley: 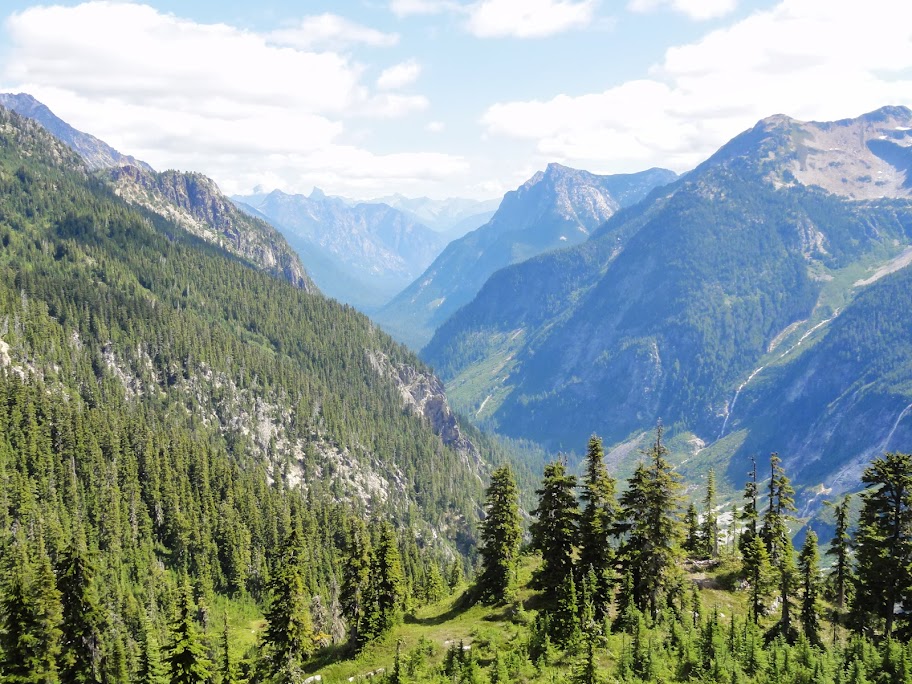 The fifth night, I camped at Stilwell Camp, having walked about 12 miles. It was a pleasant site among big trees, but I was plagued by yellowjackets while eating dinner.

Day 6, I climbed 1200 feet from the Little Beaver Valley to Beaver Pass. It doesn't feel much like a pass, since it's only 3600 feet, heavily forested, and level for about half a mile. There was another old shelter at the pass, this one undergoing restoration: 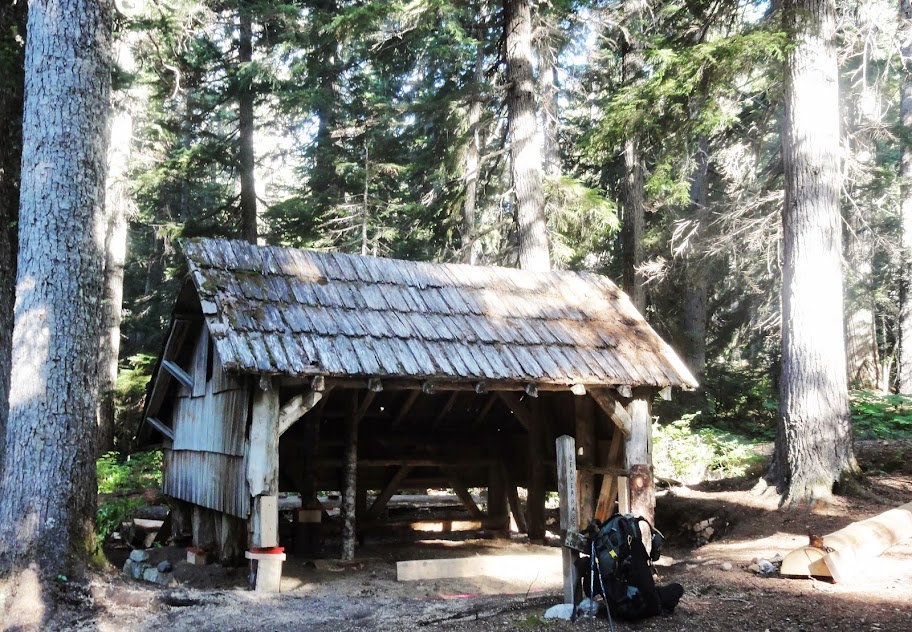 Nice to see the Park Service caring for these structures.

Next was the final leg of my trip: down Big Beaver Creek, which is known for its extensive old-growth cedar groves. You don't see the big trees at first; you're in a mix of mature Doug fir, Ponderosa pine, and cedar, with occasional views of surrounding peaks: 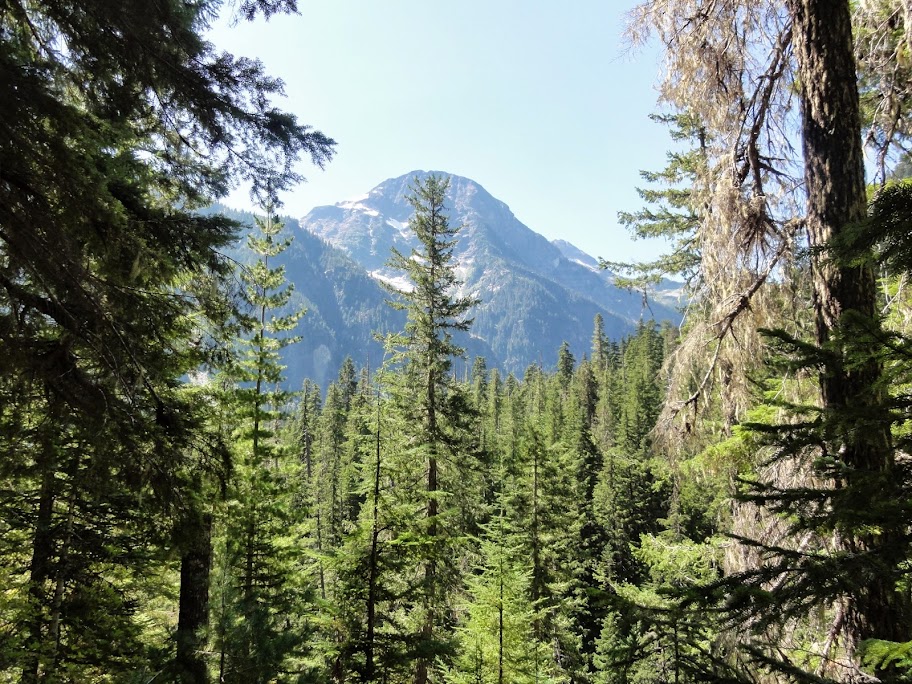 And a few amphibians:

But eventually, you reach the big trees: 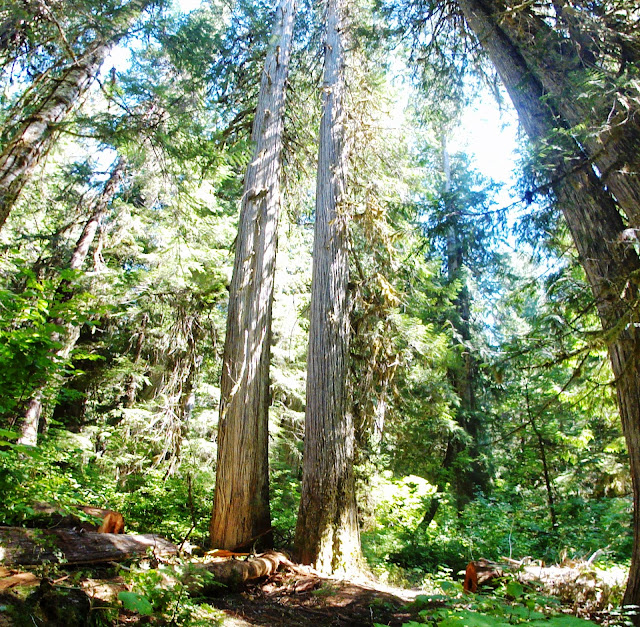 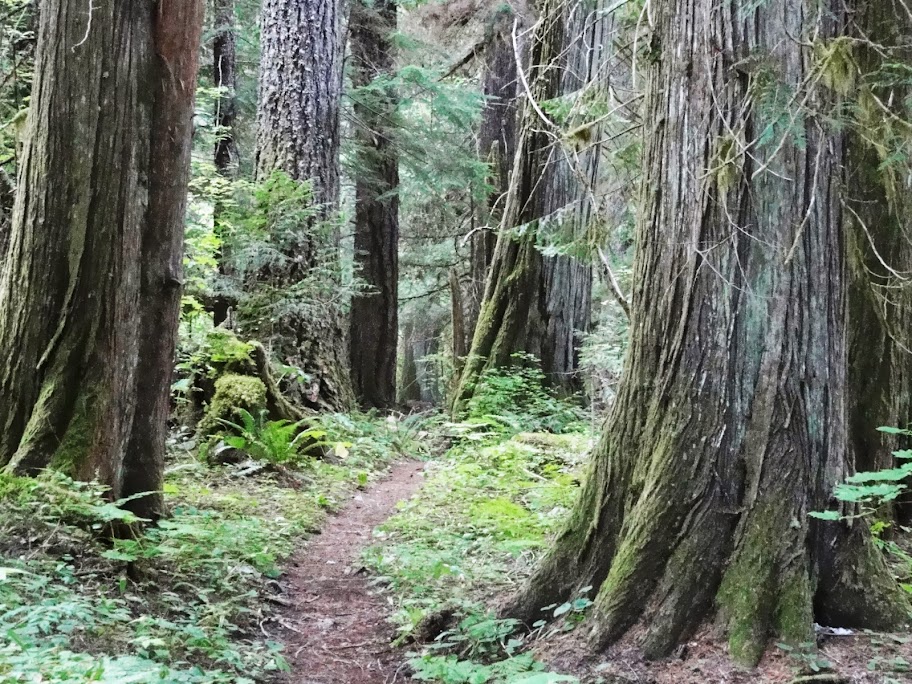 The sixth night, I camped at 39 Mile Camp, which I had all to myself. Once again, I had seen no other hikers all day.

Day 7, I continued another 6 miles down Big Beaver to Ross Lake. There's a fine bridge crossing Big Beaver there: 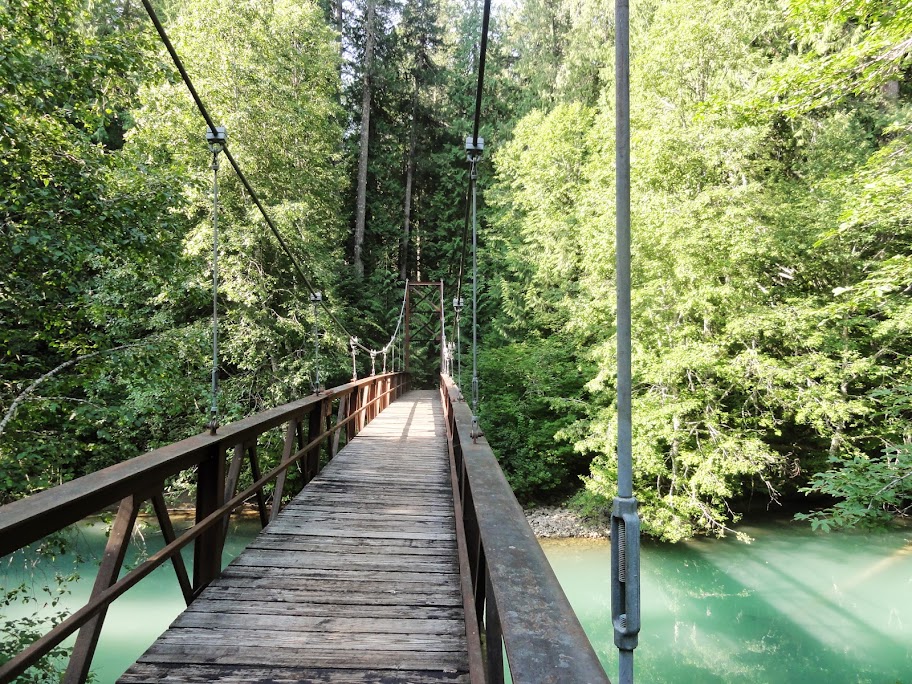 From the bridge, I followed a trail along the west side of the lake, which gave occasional views. Here's Desolation Peak, where Jack Kerouac spent the summer of 1956 as a fire lookout. The lookout tower is still there, and it's a pilgrimage destination for Beat Culture devotees.

Finally, the trail crosses Ross Dam, 540 feet high, before climbing back up to the trailhead on the North Cascades Highway: 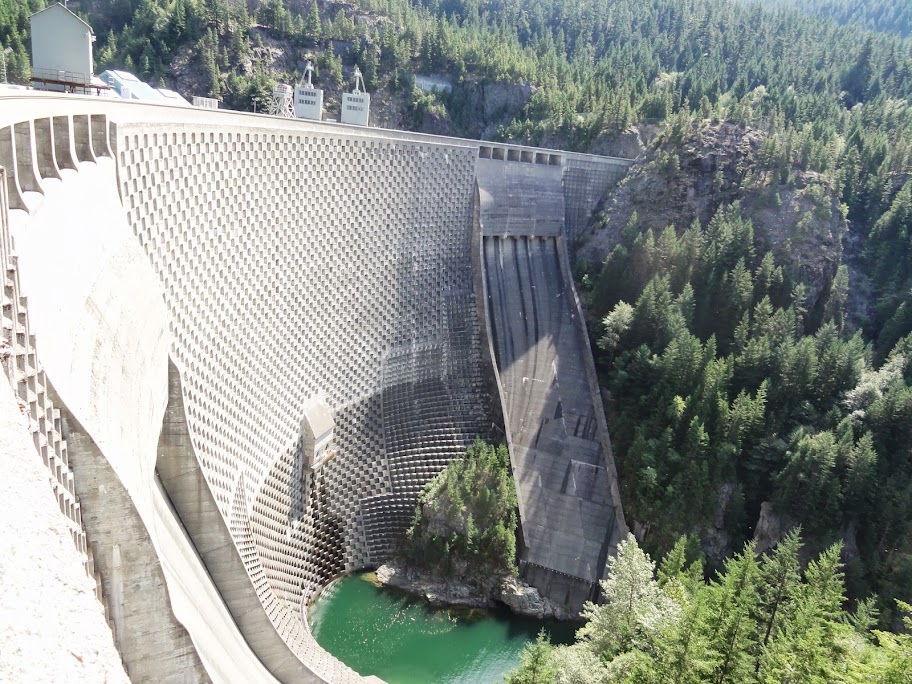 Time spent hiking will not be deducted from your life.

Wow what a great trip! Thanks for sharing.
Top

Great outing! So many places to visit... I only realized whereabouts you where, when you mentioned the Hannegan Pass trailhead! Impressive with the weasel, salmon and bear... You must still be kicking yourself for not getting a good shot of the bear as it posed!
Some people are really fit at eighty; thankfully I still have many years to get into shape…
Top

I did the loop via Hannegan Pass some years ago, with a die trip to Whatcom Pass and Tapto Lakes.

You didn't have any pics of the lookout on Copper Ridge - maybe the clouds were in at that point? If so, that is a shame as it is a very nice spot.

Ambitious trip Vibram. That's cool that you got to see the sockeye spawning at the lower Chilliwack crossing. That was one of the things I was looking forward to seeing when I made a Hannigan/Copper Ridge/Whatcom loop a number of years ago. Unfortunately the closest I got was smelling dead fish and never actually saw any despite looking around for them at the crossing. It's a bummer you didn't get some clearer weather for the super views but then you probably were at least partially spared all the clouds of little biting black flies that the area seems to produce.

I can relate to your bear pic. I saw a few of them on my trip but my best sighting was at a little flat section on copper ridge just below the final climb to the lookout. I had stopped to eat some lunch and just as I was getting ready to head on up a couple guys coming down stopped and said they had seen a mother and her two cubs up the trail a ways. Then as they walked off they spotted them down below cooling off and playing in a little tarn on the ridge. I hurried over with my new video camera and proceeded to shoot what I though was going to be some awesome video of the mother shooing her cubs out of the tarn, and then throwing up a big plume of water herself as she shook off coming out! It wasn't until a few minutes later that I realized I had actually missed the whole thing because the new camera came out of standby a bit differently than my previous one and it had been paused the whole time...

drm wrote:You didn't have any pics of the lookout on Copper Ridge - maybe the clouds were in at that point? If so, that is a shame as it is a very nice spot.

The lookout was socked in when I got there, but I wish I'd taken a photo anyway. It's a great old place. I stopped and visited with the ranger there, because I needed to change a campsite reservation. She very graciously did so by radioing to HQ. She told me the lookout was 80 years old. It looked like a fine place to be stationed.
Time spent hiking will not be deducted from your life.

[quote="R11"]It's a bummer you didn't get some clearer weather for the super views but then you probably were at least partially spared all the clouds of little biting black flies that the area seems to produce.[quote]

Yes, I was largely spared the flies, fortunately, and there weren't too many mosquitoes either. I'd hiked Copper Ridge once before, 30 years ago, from Hannegan Pass, and the flies then were really bad. The bees were a new one for me; I'd never had a problem with them in the backcountry. I ran into a couple of other hikers along Ross Lake who'd been hiking with a large group of kids, and they said everyone in their party had been stung by a bee at least once during the trip.
Time spent hiking will not be deducted from your life.

Excellent. I just got back from a trip in the Ross Lake area as well. I enjoyed seeing your pictures, especially of the places I didn't get to.

While our team was bushwhacking through the woods, we stirred up some ground-nesting bees and three of us got stung. I was the last one in line and got stung four times. This has been the year of the bee sting for me.

It can be bittersweet to exit the woods after an experience like that.
Will break trail for beer.