I had bigger plans for the day but an unexpected shortage of fossil fuels in my trusty motorized steed took an unexpected hour to rectify. After grinding of teeth subsided, I decided to rescue the day with some exploratory hiking near Flag Point. I thought my late (10am) arrival at the Fret Ck (456A) TH would spell "no parking" but there was only one car there (then). So up the Fret Ck trail, past Oval Lk, 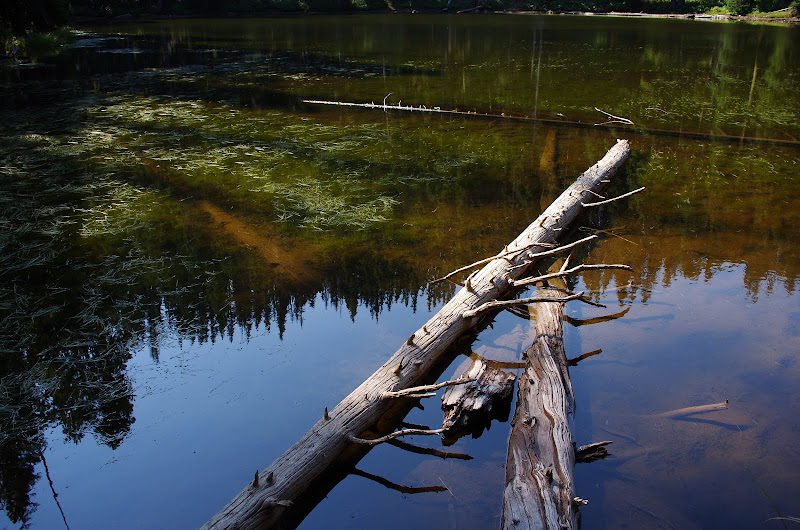 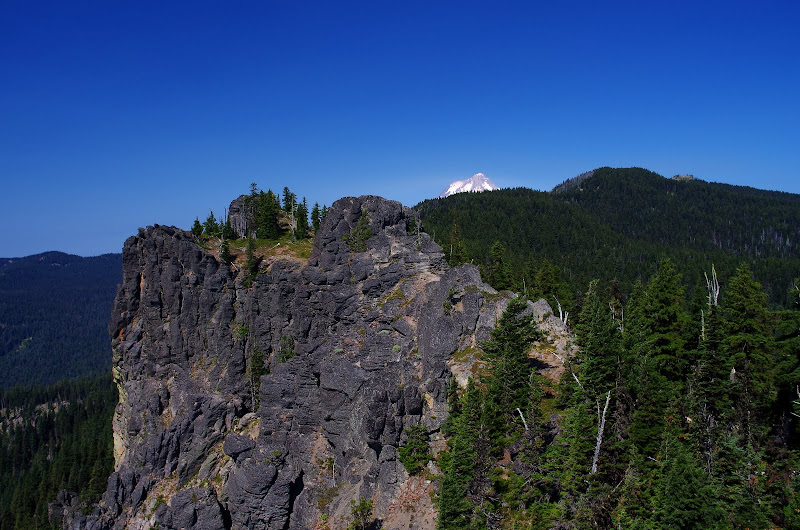 toward the Flag Point LO on the smokey horizon. Never really smelled smoke but it sure cut the visibility to the E. 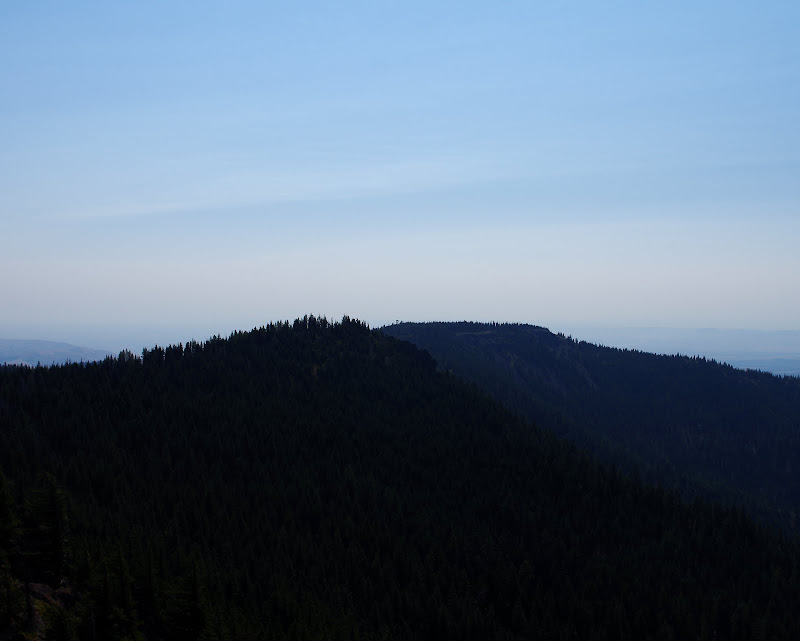 The 458 crosses the Flag Point Rd and I took that road to the LO, 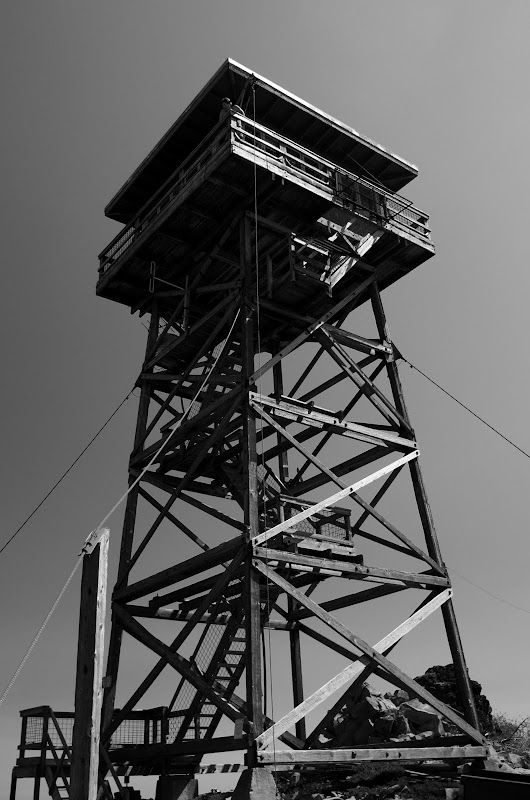 where I got invited up to get the really big view toward Hood (I wish my office had such a view - or any view!). 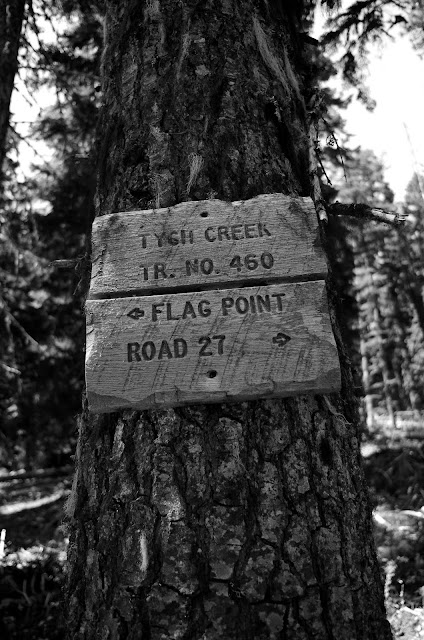 The 460 will take you to the 462 (Jordan Cutoff) trail but I got way-laid by a use trail that took me to the end of Rd 2720, which was no fun walking down in the hot sun. Eventually, I came to the 462 and took in down toward Jordan Ck. This trail is mostly OK but pretty sketchy in spots, particularly near the bottom where it disappears in a swamp. But if you keep right at this point, Rd 170 can't be missed. Once on the 170, it was obvious that the 462 was unloved, probably because the roads have made it redundant. 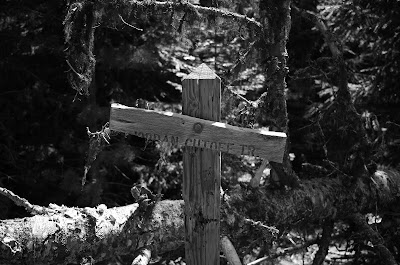 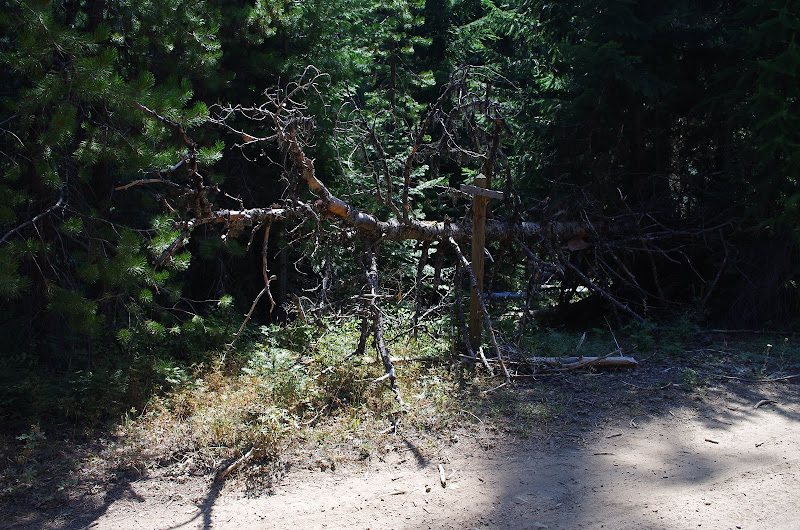 At this point, the challenge was to get from Rd 170 back to Rd 2720 - and make a loop - without having to walk 2+ miles on dirt roads. I decided to head straight uphill toward Rd 2720, figuring I'd just force a passage. But, within 100m of leaving the road, I came across a great use trail that took me along the base of some cliffs, 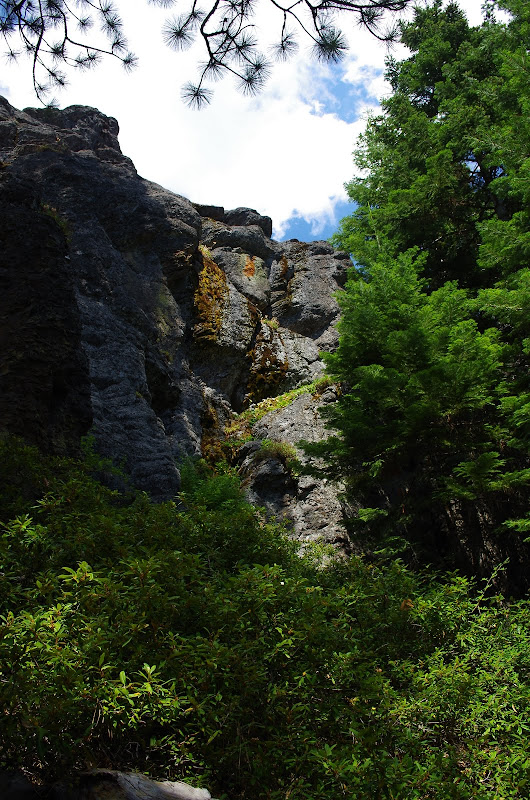 and right to the 2720. From there, it was a mile on paved road to my car. An interesting little loop (12 mi RT, 2100' EG) - maybe not one I'd do again but it did whet my appetite to explore the other trails in the area - probably in the Fall when it's a bit cooler and less smokey. 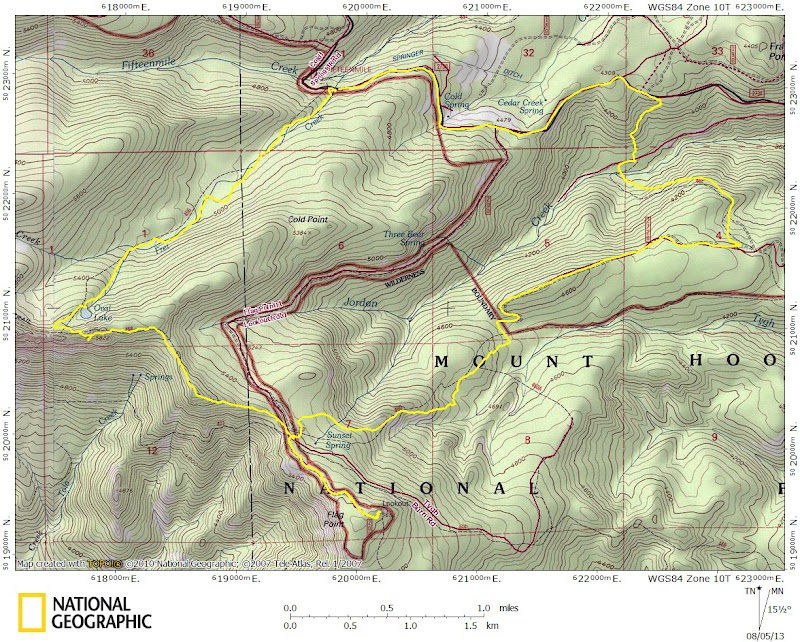 That's a great loop idea, Van. I really like the black and whites. Too bad about the trail conditions on Jordan cutoff and some of the other less used trails in the area. It really is a beautiful place.
Top

Is Tom working the LO this year?
"I arise in the morning torn between a desire to improve the world and a desire to enjoy the world. This makes it hard to plan the day.”
― E.B. White
Top

Thanks for the trip report and the info on trails. I went up to visit the area last week with a friend. We both used to work up there and thought we would check out some of those trails but didn't make it very far because we kept getting sidetracked by visiting all our favorite hangout spots.

We did walk about a mile and a half down the 469 trail which starts very near the 460 and noticed that someone has put up a couple of rock cairns (thank you) near the start of trail 470A which winds SE down towards Gordon butte.That little trailhead was pretty unfindable a few years back.We didn't have time to check it out further and see if the rest of the trail is being reclaimed. If so it adds some more nice loop possibilities in the area. Maybe I'll get a chance to check that out later this year or early next spring.
Top

Thanks for the report! Especially the discovery of the use trail from the Jordan Cutoff. I've been puzzling on how to include that trail in some kind of loop, but I fear interminable blowdown in that area more than anything else.

@woodswalker: I wrote up a 470/470A loop for the Field Guide. It's strictly for the abandoned trail seekers only.
Top

No, I think his name was Boogi or Boji? He said it real quick and I was so taken by the view I failed to ask for a repeat.
Top

bobcat wrote:Thanks for the report! Especially the discovery of the use trail from the Jordan Cutoff.

My guess - judging from the bolt hangers in the cliffs - is that the use trail was made and is maintained by climbers accessing the cliffs. I don't want to out someones favorite private climbing spot but that trail - with just a little XC thru the forest (no blowdowns) - makes this loop much easier.
Top
Post Reply
7 posts • Page 1 of 1