Last June, Pablo posted a TR from a new loop over Silver Star (Pablo's Copper Ck Loop), one which I had previously sketched out from various maps and put on my to do list. With Pablo having ensured that it was doable, it was time to get it off the list. FR 41 is a pot-holed adventure that took me to a junction with NFD 4107 and the nominal TH. From there, it was a short walk down to where 4107 crosses Copper Creek, 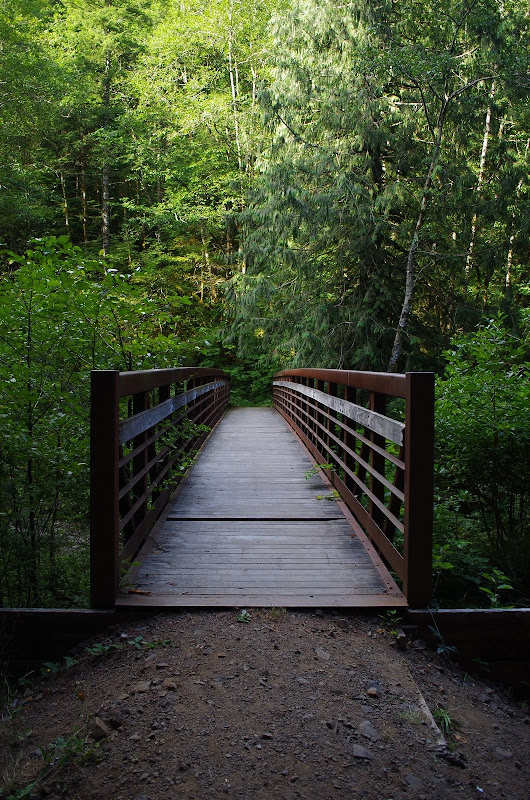 and then continues as a very nice old road / trail, 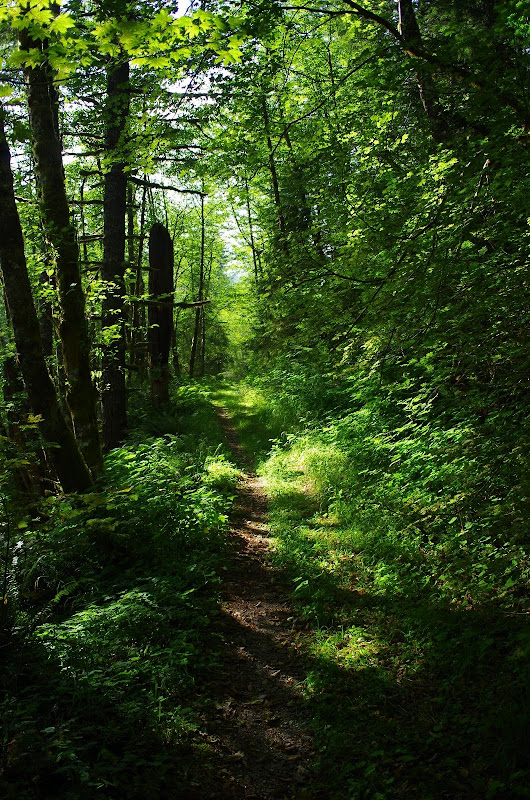 to another crossing of the creek (the clothsline is apparently for spiritual guidance only), 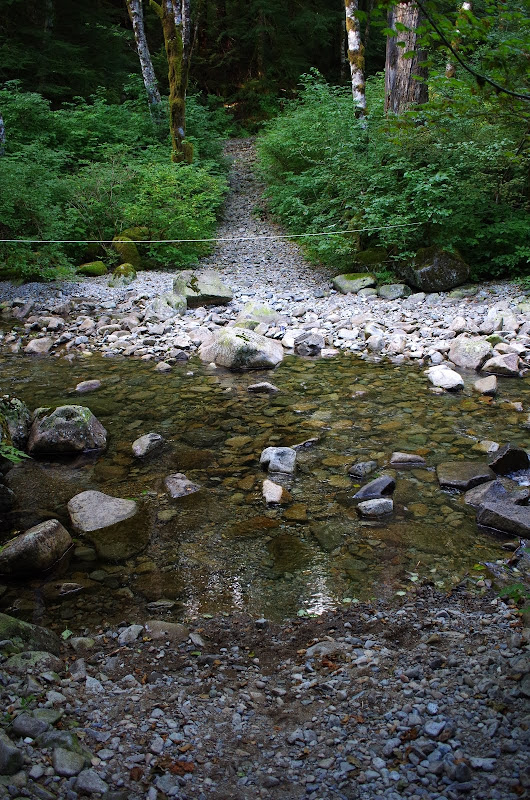 before continuing to become NFD 508 and then a very well graded old road / trail, 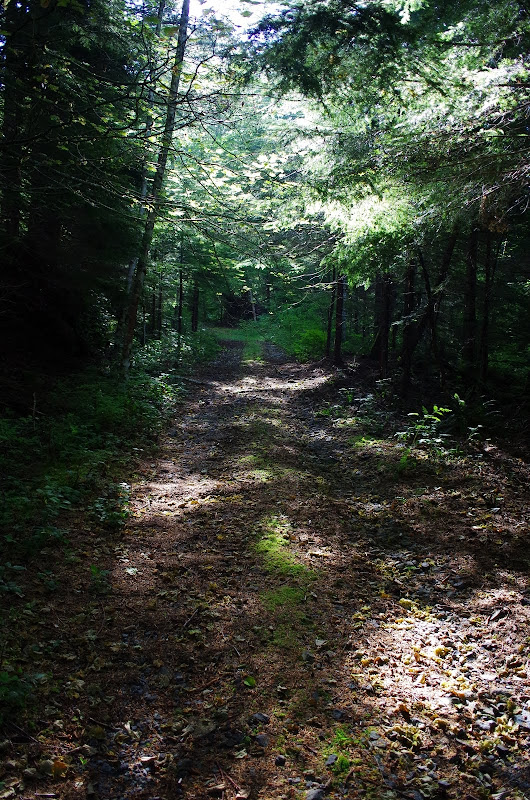 that took me all the way to the Bluff Mtn trail (172) on the ridge crest above, 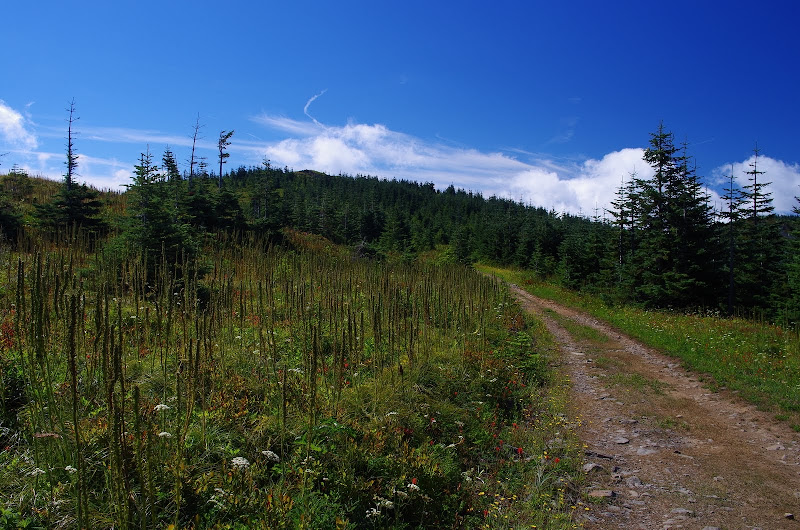 and the first big view of Silver Star and Bluff Mtn, 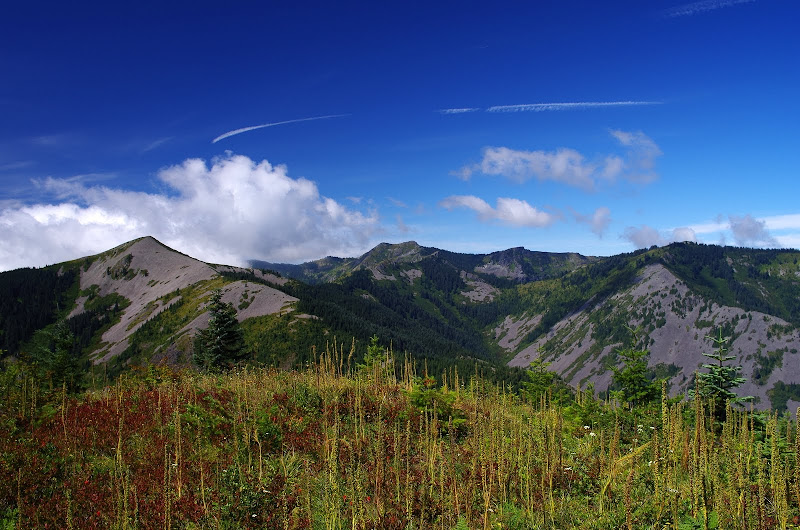 and Three Corner Rock (arrow) to the E. 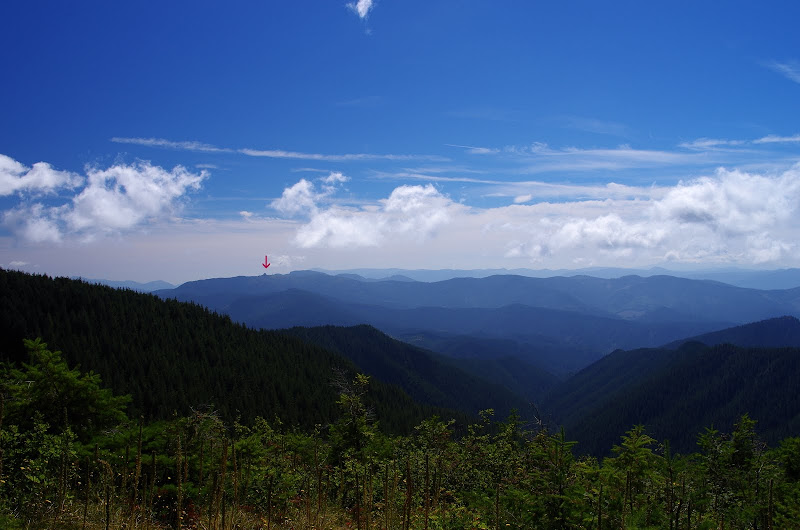 You don’t realize it in passing, but the Bluff Mtn trail is well carved into the cliffs below Bluff Mtn. 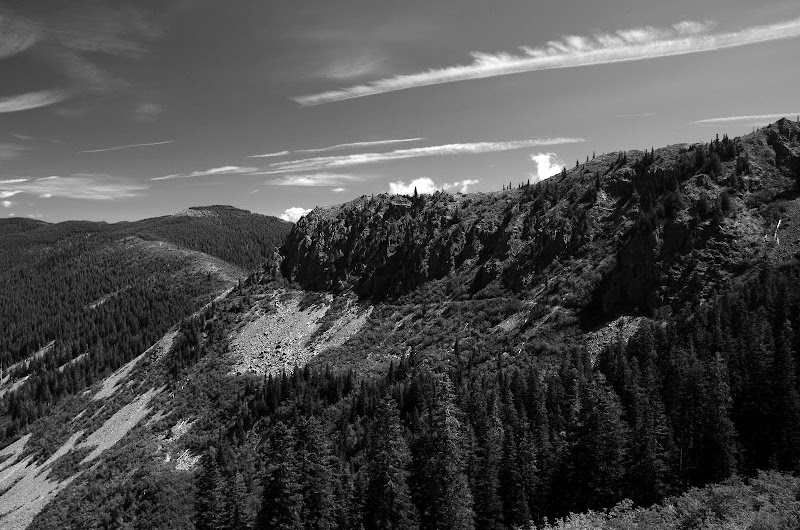 The beargrass had all gone to seed but that left room for a riot of other flowers in a variety of colors, including a very intense blue (with bug). 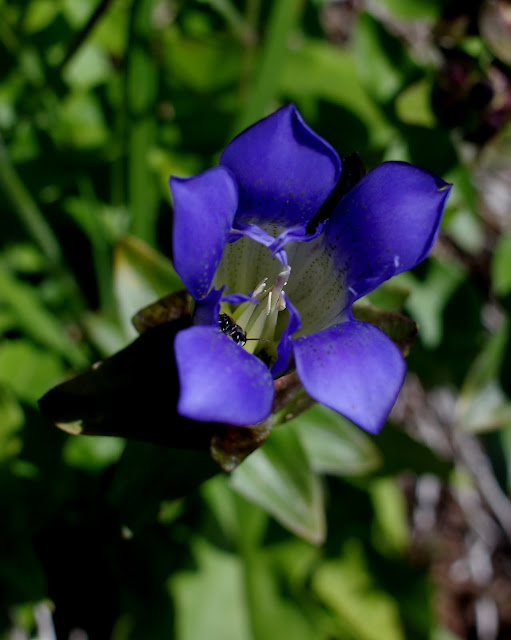 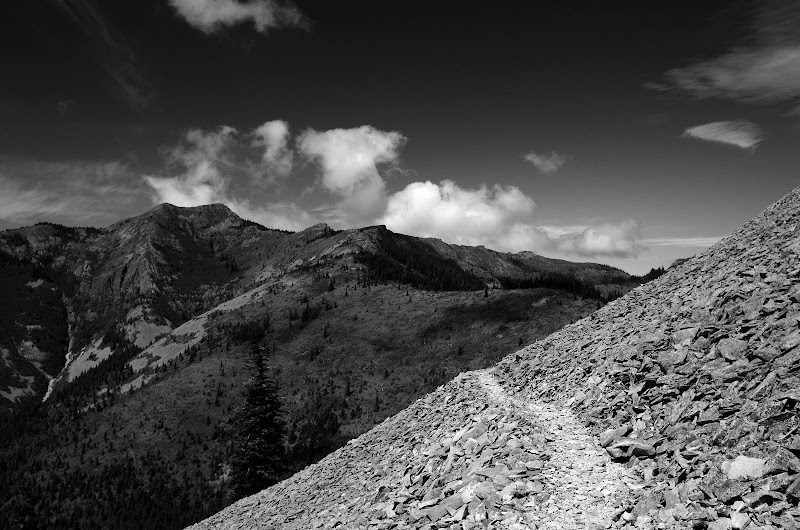 and, because it was something of an active weather day, the clouds were making amazing designs in the sky. 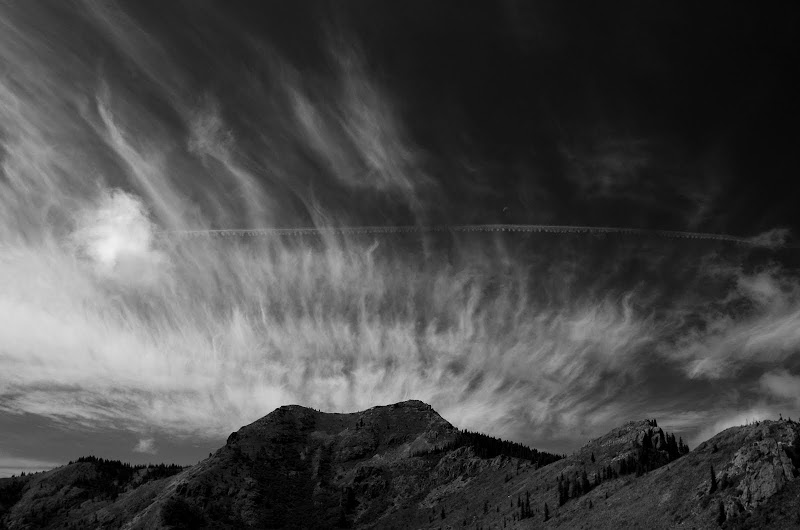 Further along the trail, I started seeing St. Helens and Pt 3977 on the Starway – at the time I didn’t realize I’d have to climb over this to get back to the TH! 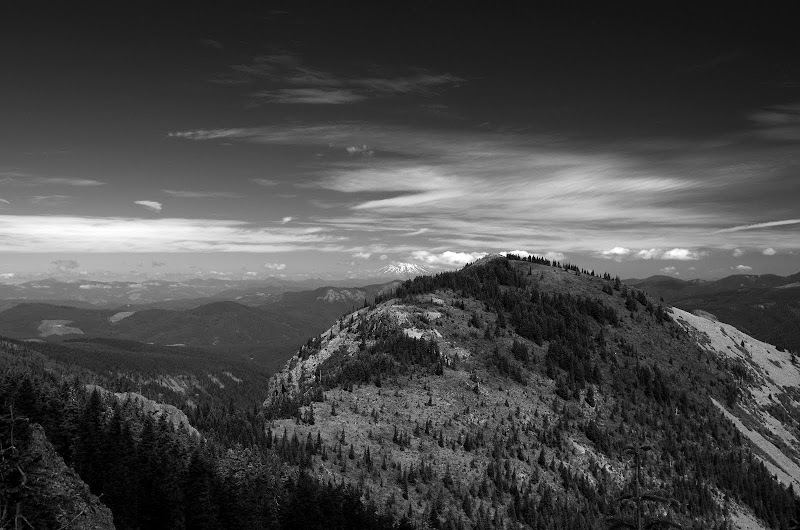 Finally the summit, with its expansive view of (L to R arrows) St. Helens, Rainier, and Adams. 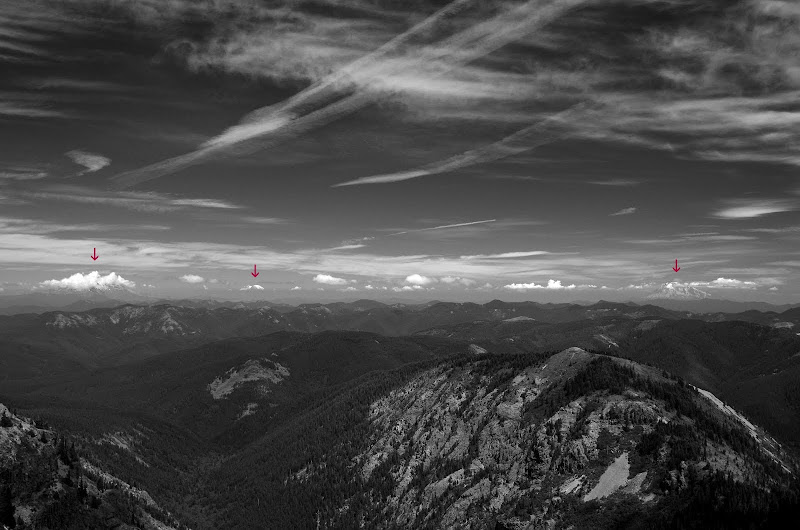 Unlike Pablo’s experience on the weekend, there was only a “crowd” of two sharing the summit with me. 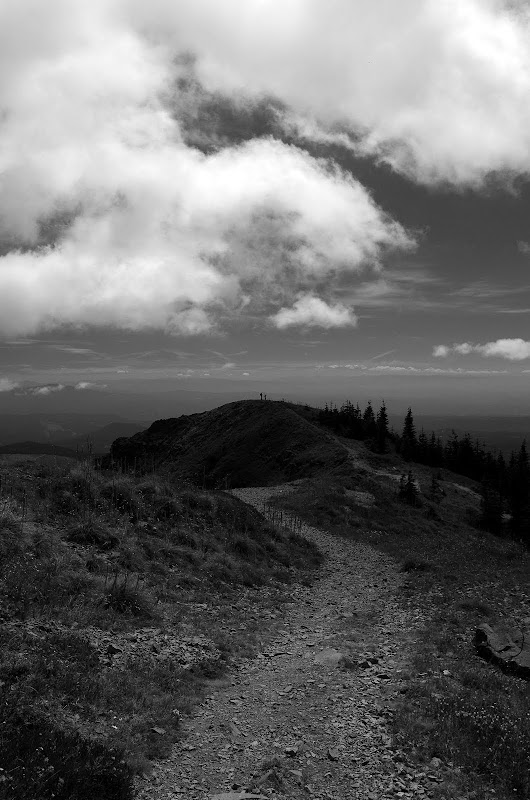 After lunch on the summit, it was back to the Starway Trail (175) and down. 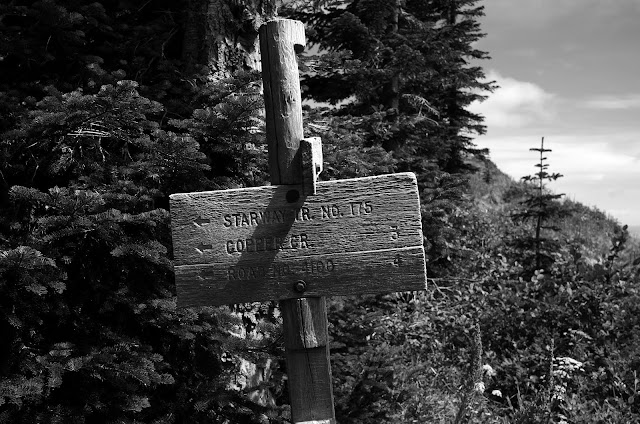 This is largely a use trail, with some sketchy spots (particularly thru the beargrass and in the forest). While it's not off-road, XC, or lost, it's not necessarily for those weak on navigation. Whatever flagging was supposed to be marking the trail is now gone (yeah!), so you’re on your own. Enroute I finally got a view of Hood (previously obscured by clouds). 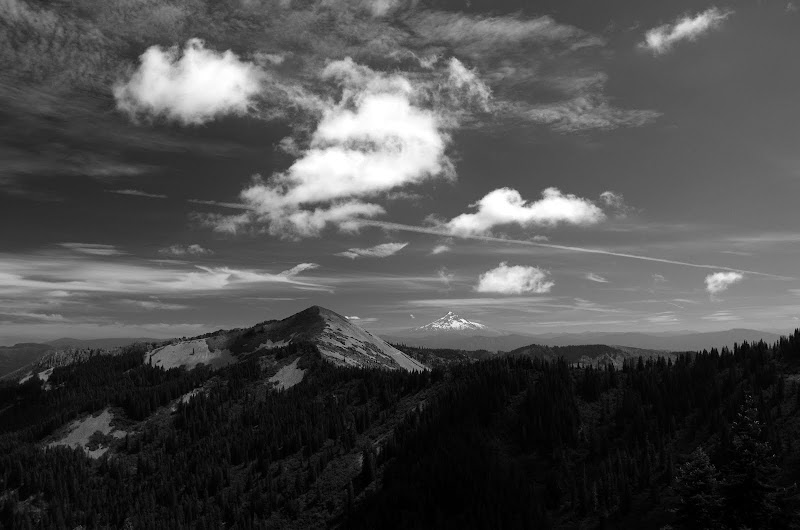 At about the 3000’ level – where the use trail expands into an old road – I came across this wrecked “shelter” – hunting camp, meth lab, alien outpost (Area 51 after the Sequester?)? 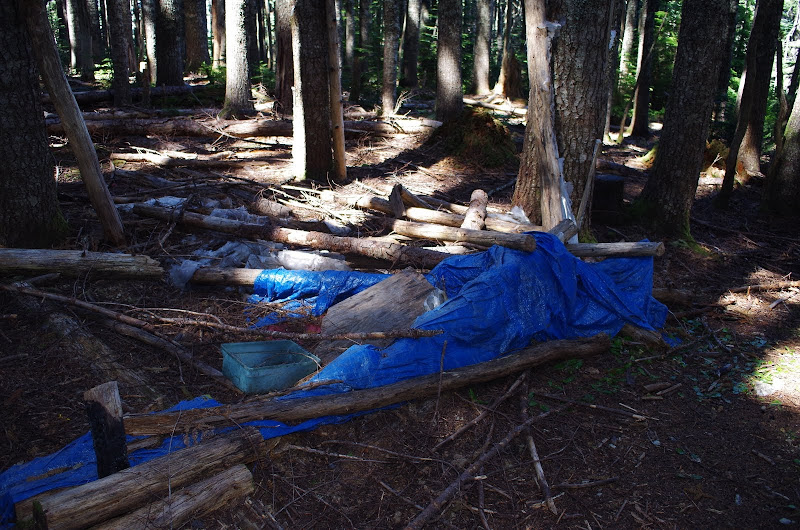 Past this point, the old road / trail starts DOWN

at an angle where it’s sometimes difficult to stand. Whoever built this thing back in the day did not have time for more than 2-3 token switchbacks, so, as long as I could remain upright, I made rapid progress back to the TH. 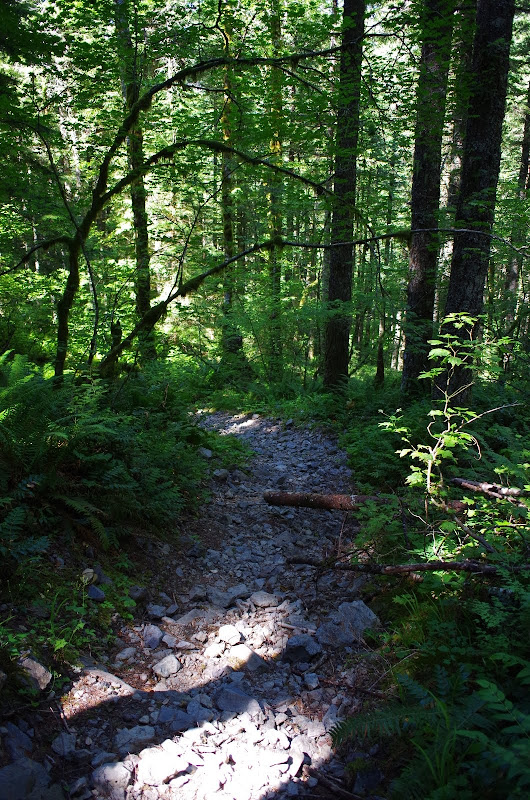 A fine, but challenging, hike (15 mi RT, 4000’ EG). Clockwise, you start mellow and fight to stay upright during the return. Counter-clockwise, you build immense character during your near vertical climb up from the creek, then get to relax on the old mining road on your return. Something for everyone! 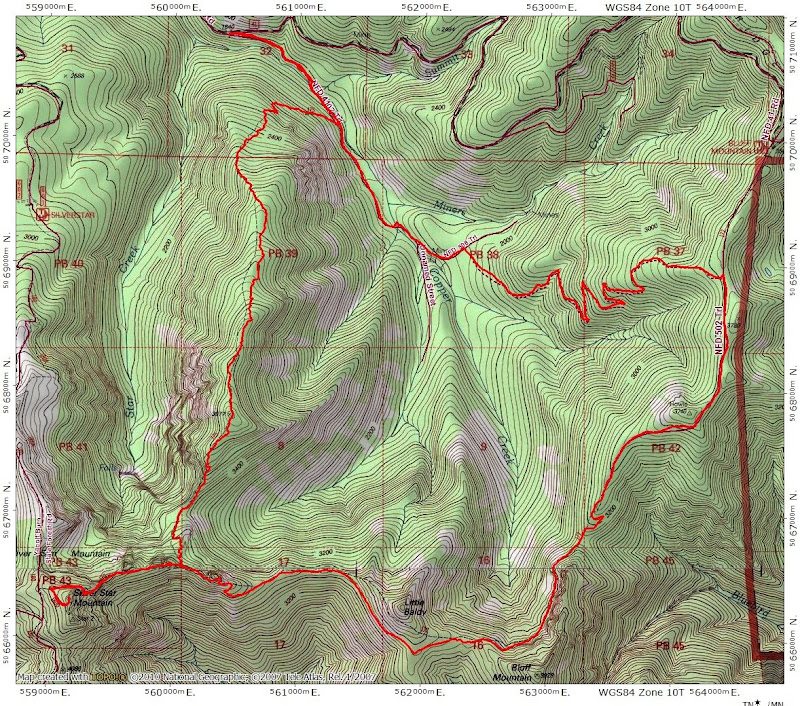 Most excellent outing, beautiful photography - I think the one B&W with the wavy clouds radiating out from Silver Star is super.

Nice! I really like the effect of the B&W photos (having grown up before color was added to the world, it takes me back....)

thanks for the excellent report and effort.

Cool report! I was one of the two people sharing the summit with you.

Photo of you on summit

pablo wrote:Most excellent outing, beautiful photography - I think the one B&W with the wavy clouds radiating out from Silver Star is super.

Thanks for scouting this route! Could become a classic one!
Last edited by VanMarmot on June 21st, 2016, 6:11 am, edited 1 time in total.
Top

Don Nelsen wrote:Nice! I really like the effect of the B&W photos (having grown up before color was added to the world, it takes me back....)

thanks for the excellent report and effort.


Thanks! My first photo class was with b/w film (triex!)...feeling old now!
Top

pablo wrote:Most excellent outing, beautiful photography - I think the one B&W with the wavy clouds radiating out from Silver Star is super.

Thanks for scouting this route! Could become a classic one!

Thanks to both of you! I fully intend to do this loop, just as soon as the high country isn't an option anymore.

I'm wondering about the choice to do it clockwise, though? My inclination would be to go up Starway, not down it!
Karl
Back on the trail, again...
Top

Excellent loop! I've done it as a hike/bike because I didn't have the imagination to try the mining road. Has anyone been to the mine?
Top

It's nice to see a silver star hike post major bloom. I was thinking it was probably less crowded. The deep blue flower looks like a gentian.
Great photos.
Top
Post Reply
11 posts