Between Big Huckleberry Mtn to the W and Little Huckleberry Mtn to the E is the aptly (but unimaginatively) named Big Lava Bed. It covers over 20 square miles and erupted only 8,200 years ago from a source vent which is now a 4,198' high cone near its N end. Marge & Ted Mueller's 1995 A Guide to Washington's South Cascades' Volcanic Landscapes describes this lava bed as one of the "...most primative, untracked, least-explored, and least known areas remaining in the South Cascades." I had time today for a short hike and so decided to see this lava for myself. I parked along FR 60 about a mile past Crest Horse Camp and plunged into the lava heading E. It was immediately apparent that this is a tortured landscape of trees, brush, piles of basalt blocks, and narrow (and not so narrow) furrows in the lava surface. 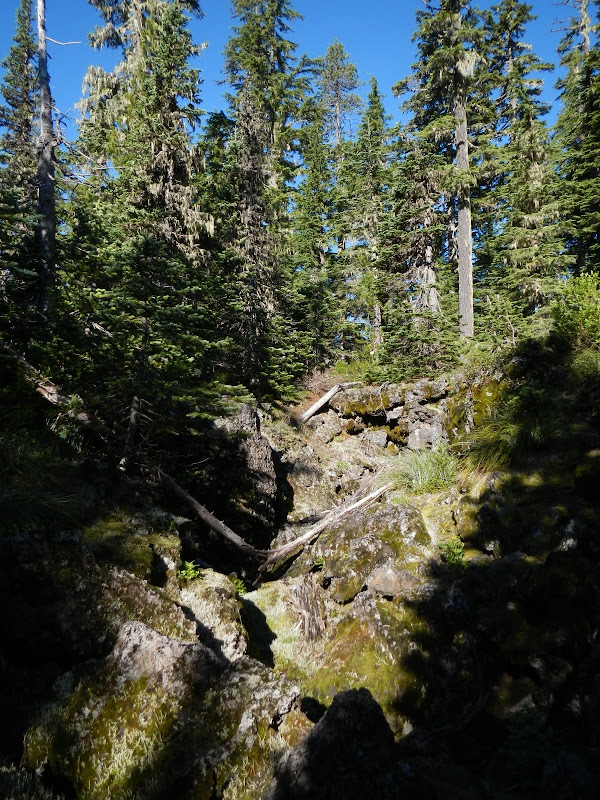 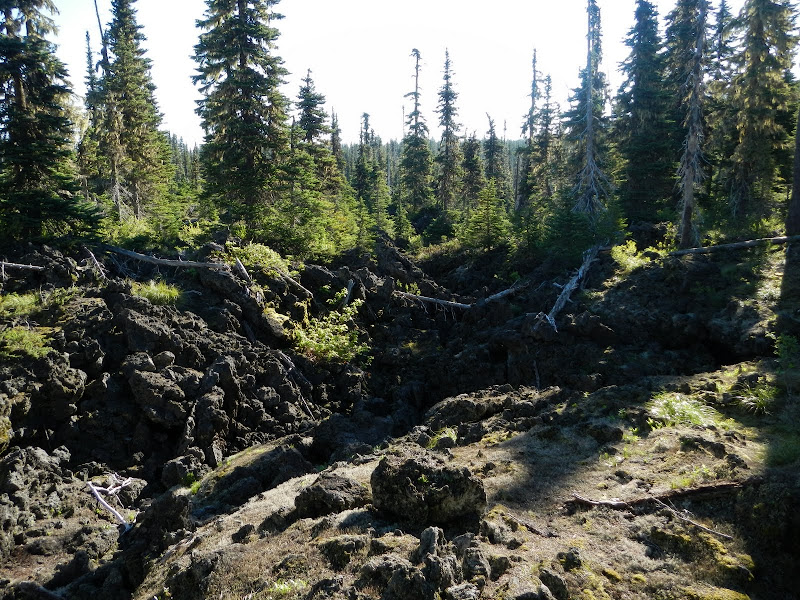 Despite it being a pretty dry landscape, the mosquitos were out in force - apparently from a few small puddles with enough water to serve as nurseries for these fiends. 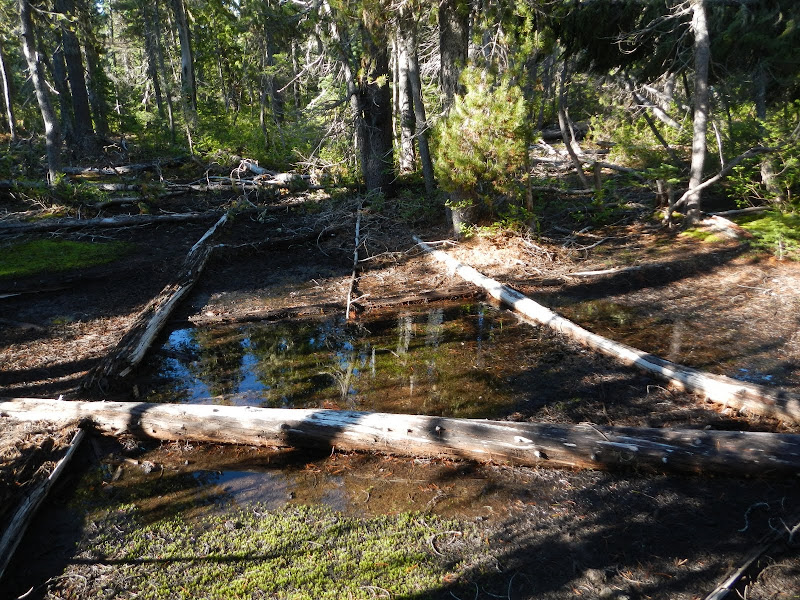 I was able to skirt around some large open fields of lava on the way to the cone (I wouldn't be so lucky on the way back). 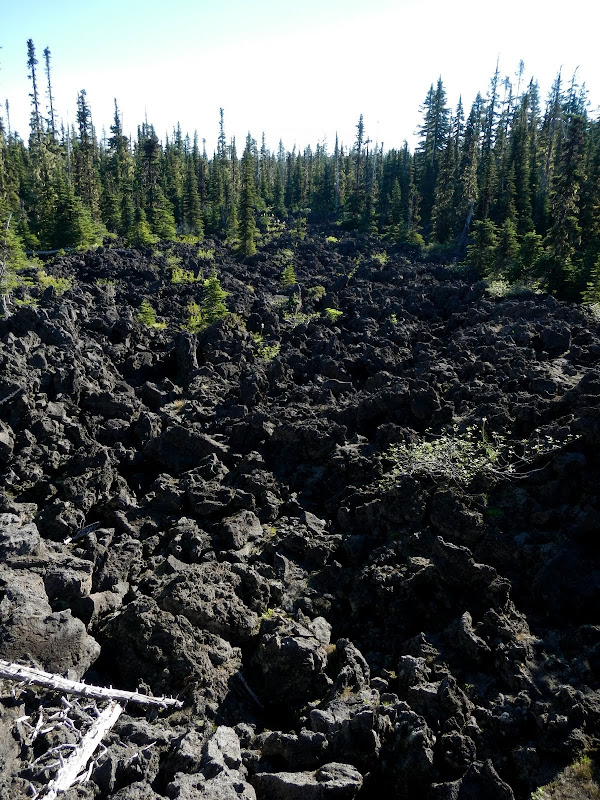 What wasn't lava, was lava and brush, 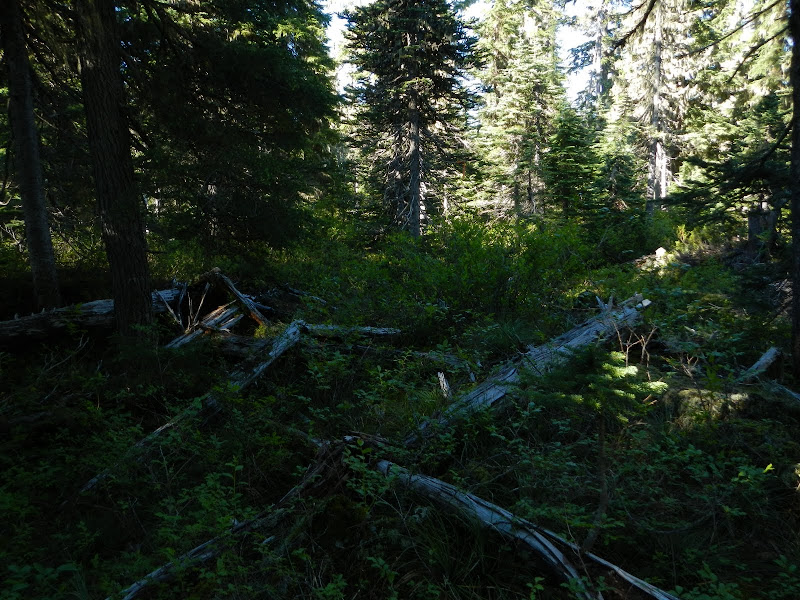 with an occasional bear grass bloom. 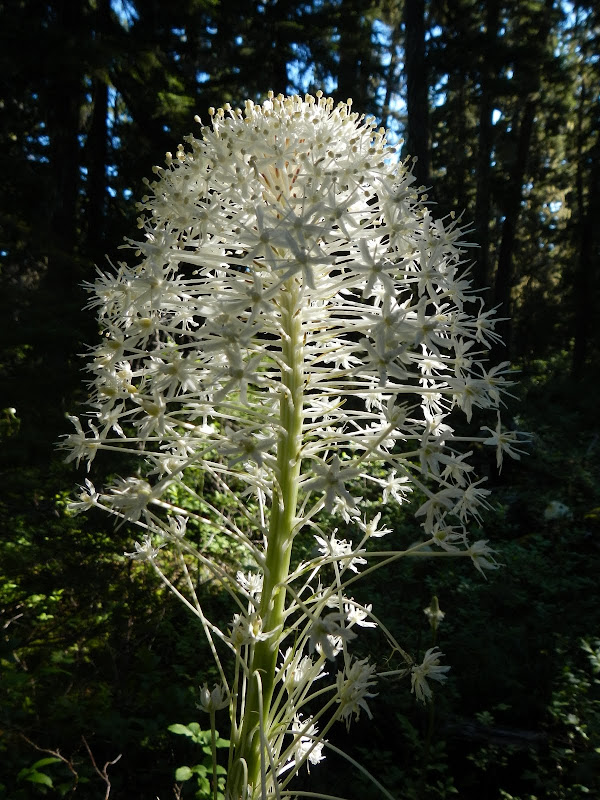 The way I went in to the cone had me climbing a 150' basalt boulder field, which provided one of the few views available. That's Three Corner Rock (arrow) on the far horizon. 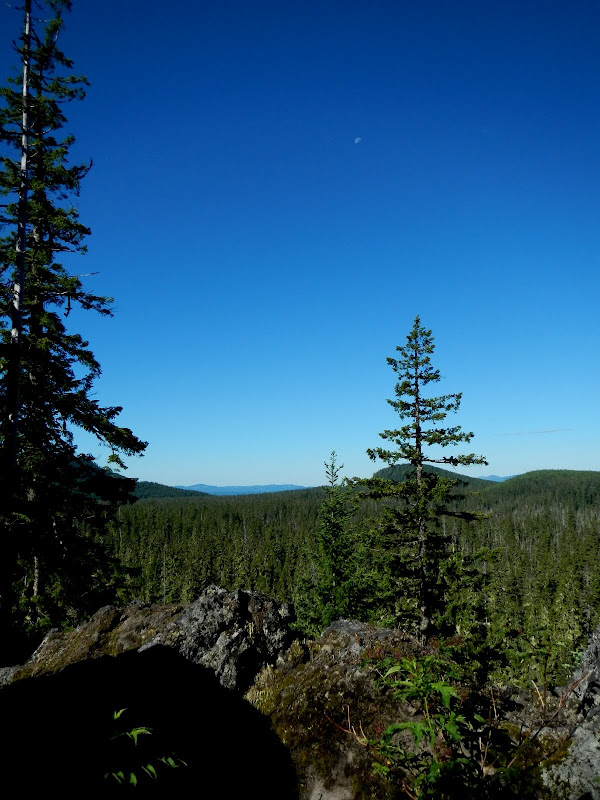 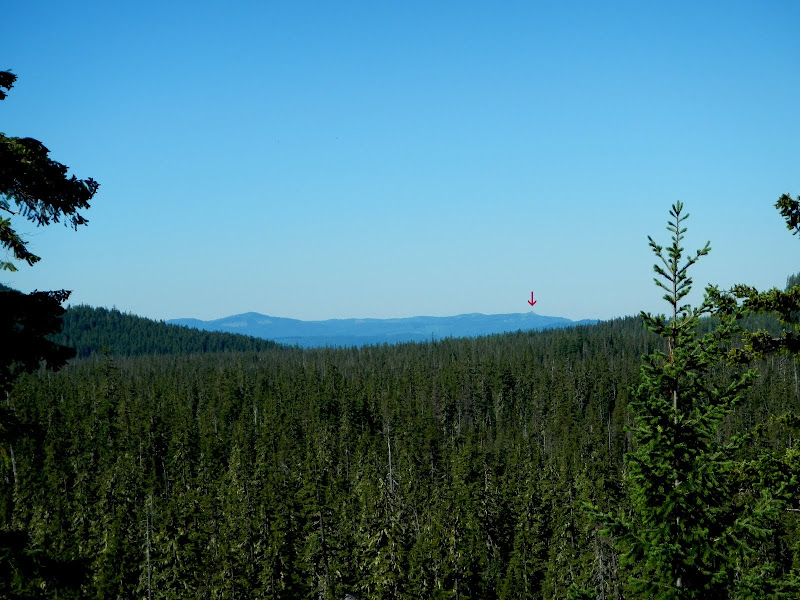 After that it was more lava, 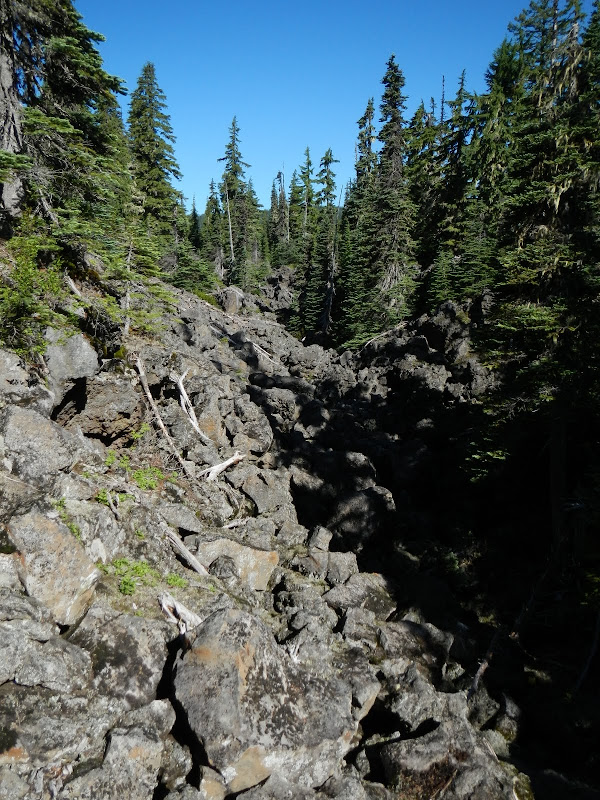 and another 200' climb up basalt. The contours shown on the map make this terrain look flat - they simply do not accurately represent its highly convoluted nature. 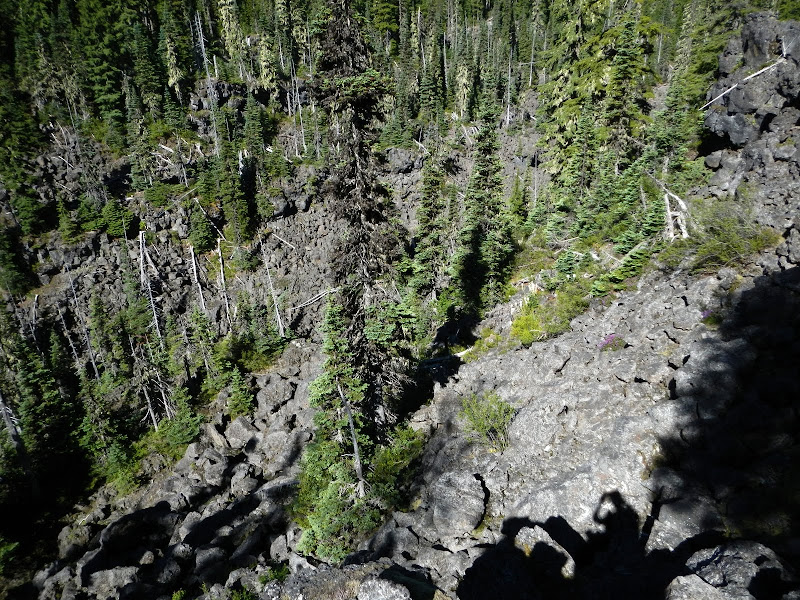 The flows here were too thin to form lava tube caves but some of the jumbled basalt is deep enough to make subterranean chambers in which the air is considerably cooler (I saw ice in one). When that air comes to the surface, it forms a mist which makes it looks like the ground is smoking. 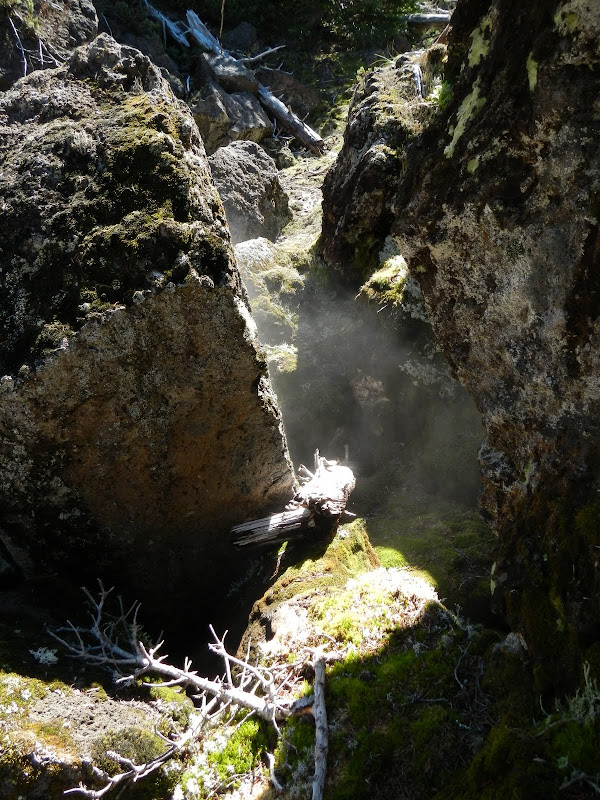 At the base of the cone, the lava and basalt subsided and the terrain started to look more like a normal forest. 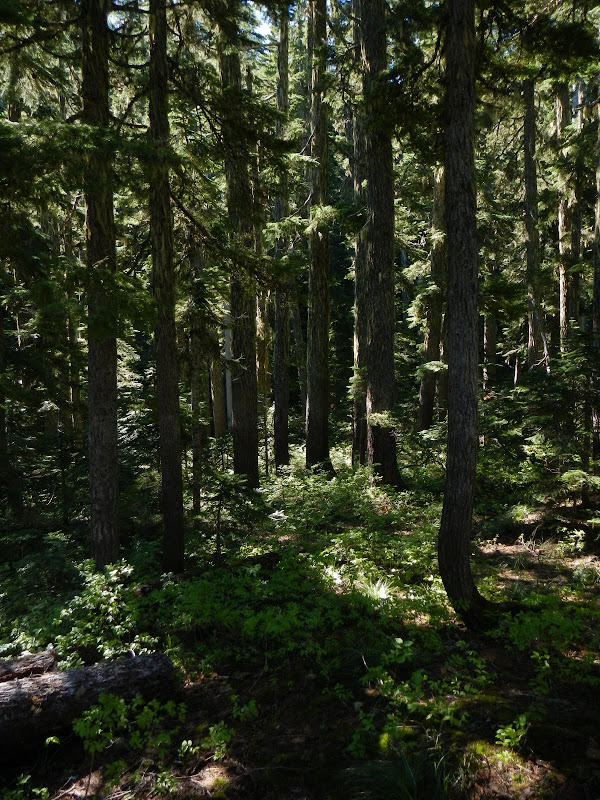 This "normal" forest continued all the way up to the top of the cone and the hiking was considerably easier here than back where there was a lot of lava. Although I caught a glimpse of Adams through the trees, there were enough of them to rule out any real views from the summit. I circled the cone and headed back W, intending to drop into the crater, only to find that it is still filled with snow. 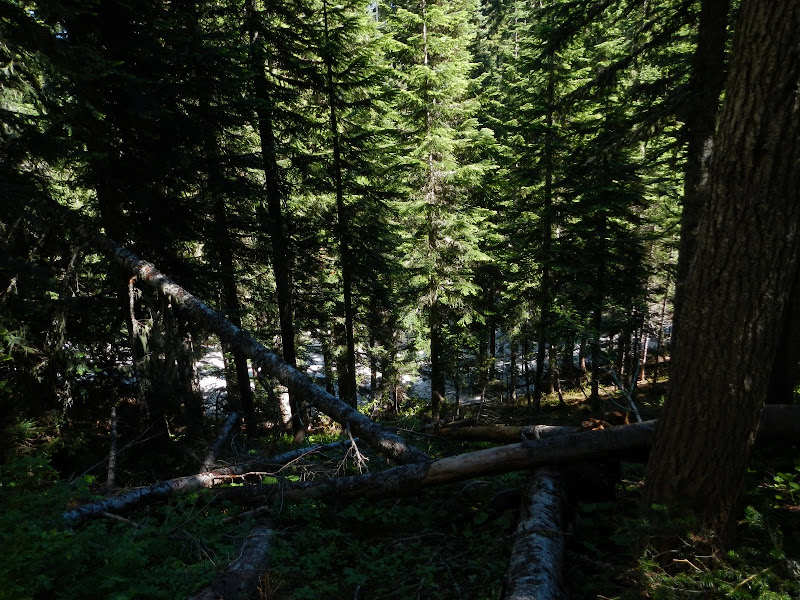 I dropped off the SW side of the crater and circled back around toward the car, only to find myself having to cross long stretches of lava - very slow going due to instability and sharpness (falling on this stuff cuts you up pretty bad). 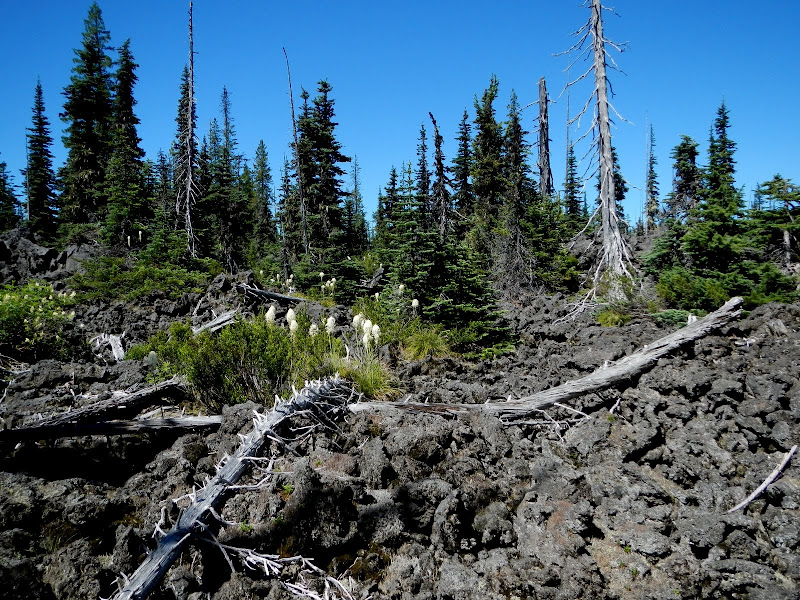 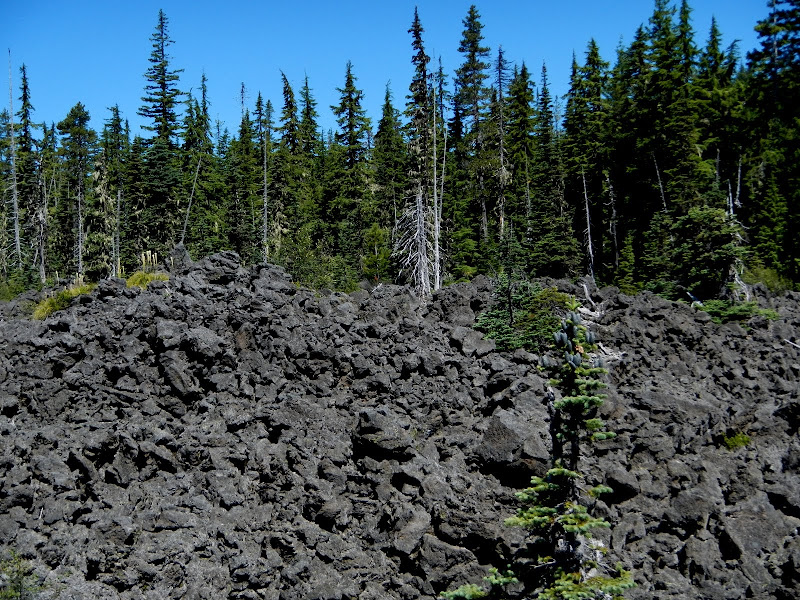 While I'd encountered fairly long stretches of brush on the way in, the path I chosen for the return was mostly lava fields or one furrow after another. I came across a spot where a crew had made it in to fight a small fire - hard to imagine hauling fire fighting gear through this terrain! 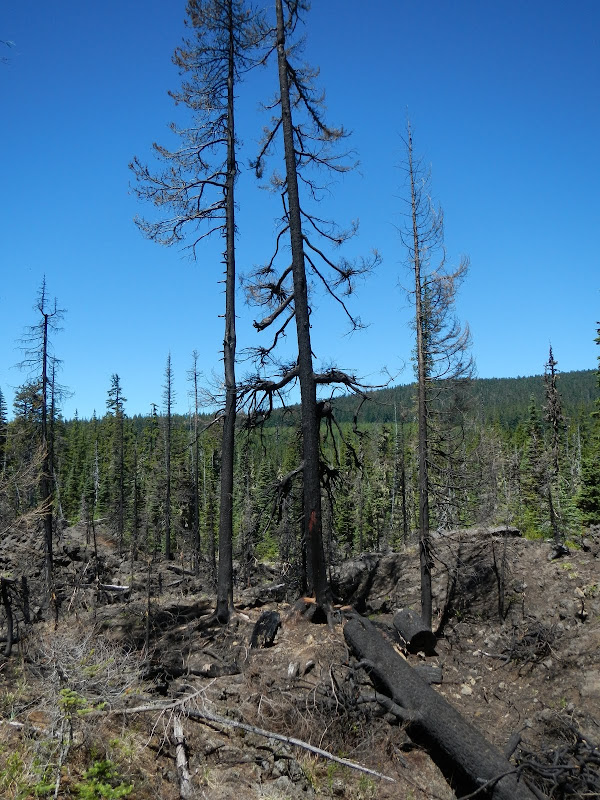 A short (4.5 mi and 800' EG) but intense hike. I really had to watch every step (less so in the forest) to avoid breaking an ankle in a lava hole or getting flayed by falling in the stuff (didn't entirely miss out on the flaying). A GPS really helps in the undulating furrows, but if you walk W, E, or N far enough (and don't go in circles), you'll always come to a road. If you go S, good luck! But, for those who really want to go where "no one has gone before" and also see a highly unique ecology, Big Lava is worth a visit. 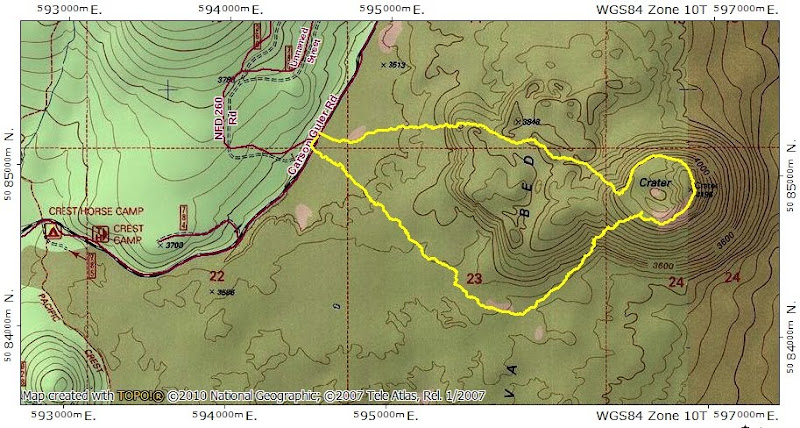 Excellent report and photos, Van. That is an incredibly interesting area and one I would love to know more about. Did your boots survive the lava?
Top

Fascinating, Van - thanks for posting! You also get bonus points for the thread title...

Splintercat wrote:You also get bonus points for the thread title...

Nice to see someone braving the impending mosquito madness of that area so early in the year. A very interesting off-trail experience!
Jim's Hikes

Sean Thomas wrote:Excellent report and photos, Van. That is an incredibly interesting area and one I would love to know more about. Did your boots survive the lava?

Thanks! The boots - high top light-weight Merrell's - came thru OK but are pretty scuffed-up. The ankle protection they offered came in handy - I wouldn't venture on to the lava in low top shoes.

Congrats on your MOH trail in a day!
Top

Splintercat wrote:Fascinating, Van - thanks for posting! You also get bonus points for the thread title...

Frankly, I thought of the title first - then had to find a hike for it.

I live another Trip through you

Im pretty sure I would also have to wear gloves of some sort. I'm almost guaranteed to fall stumble or trip & I'm sure my hands would not like the feeling of that

Cool hike Bruce! I am not sure I wish to follow your footsteps in this case. The jury is out... Tons of Brownie Points for going there!
Some people are really fit at eighty; thankfully I still have many years to get into shape…
Top

That's "one of those places" I've gazed at from a distance many times, and wondered about. This is the first first-hand account I've read of getting in there. Was surprised there was still snow in the crater, at that elevation. (A recurring theme for me lately.

Amazing adventure! Thanks for sharing this.
Karl
Back on the trail, again...
Top

Thanks for the great pics and report. I did the same hike on 8/3/96 and swore I'd never go near that monster again!!! There was no snow in the crater then but not much to see as it was covered in dense stands of fairly small trees. No kidding about the map not revealing the truth of the terrain - but that is almost always the case in such convoluted areas.

Thanks for letting me relive it vicariously.