Visited the Starway Trail in the Silver Star Range today to check out the flowers, waterfalls, a benchmark named Howie and the unknown but now known 505 Trl.

First up, contrary to the FS and Doug Lorain, the Starway Trail is easy to follow from beginning to end. In my opinion the new guy on the block, Matt Reeder, has the most accurate description of the 3 - see Off the Beaten Trail hike #8. Clearly some people in the past 2-3 years have gone up there with some loppers and cleared trail - that said, easy to follow does not mean built to any kind of standard other than use trail and it is still a challenging hike. If for some reason a hiker can't find the trail the route is literally festooned with yards of orange ribbon.

The plan was to go up the Starway, tag Silver Star, then down the Bluff Mtn Trail to visit Howie the Benchmark and then to find just what is up with that crazy trail/road or whatever that branches off Bluff Mtn Trail east of Bluff Mtn and switchbacks its way down to the road that parallels Miners Creek. On the latter a working trail there would make a nice loop with the Starway/Bluff Mtn trails and one would not have to negotiate the 41 road back down to the Starway trail head.

The Starway now has a marker at the junction of the Starway and the 4107 Rd. 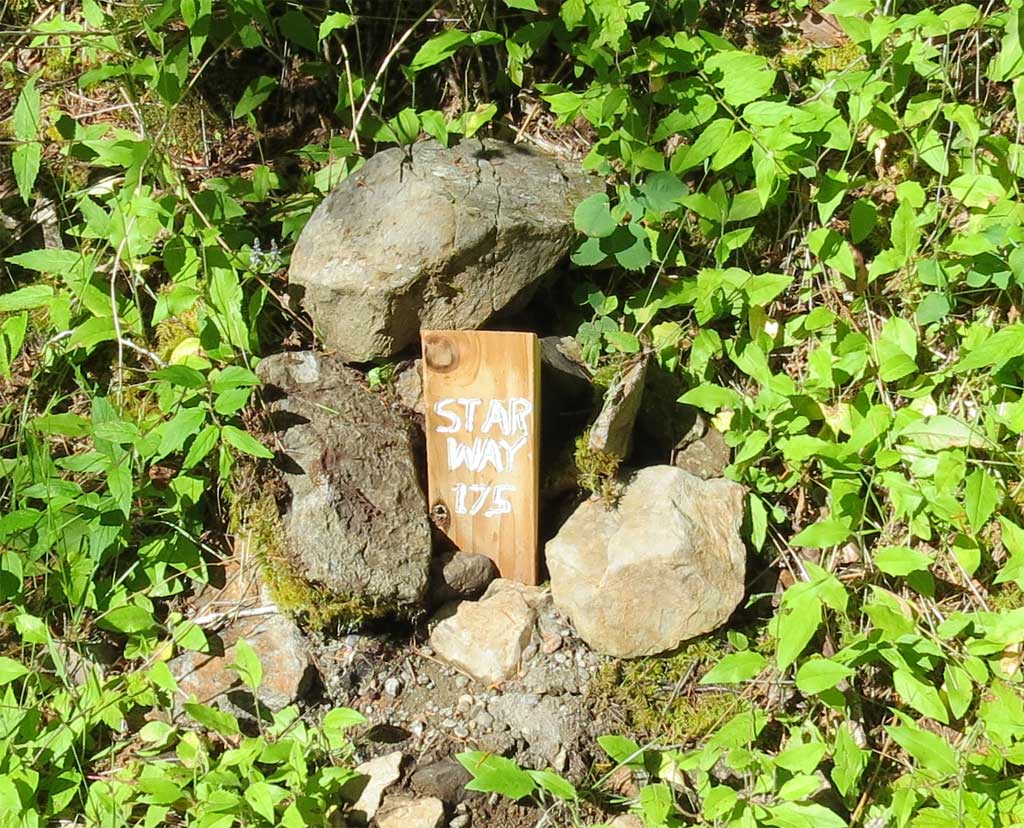 After much huffing and puffing up the old jeep track to get to the ridge line proper I landed in the meadows and viewpoints unique to the Starway. 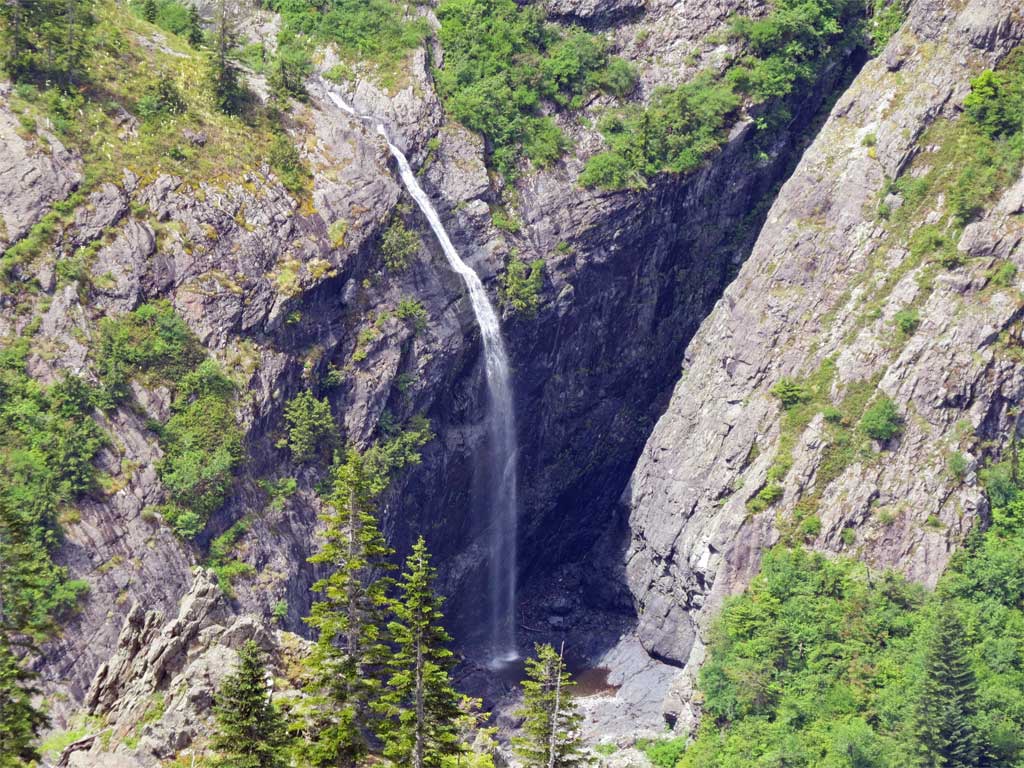 The Twins were just dribblers at this point: 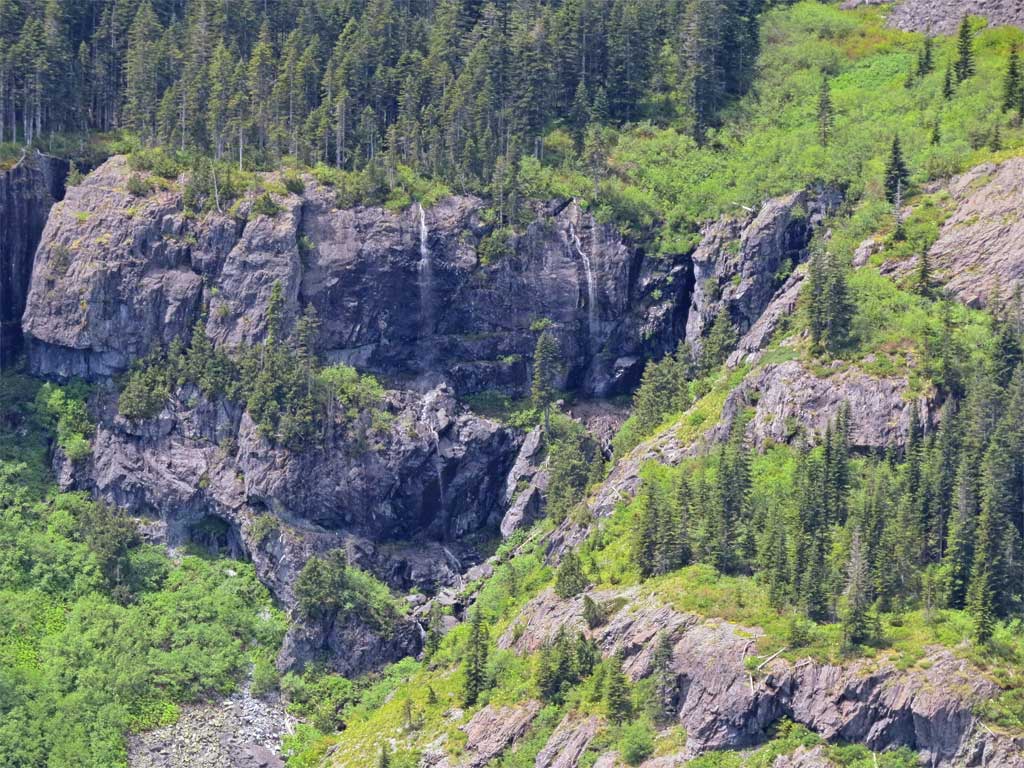 In the meadows along the ridge - Beargrass, Beargrass, and then more Beargrass: 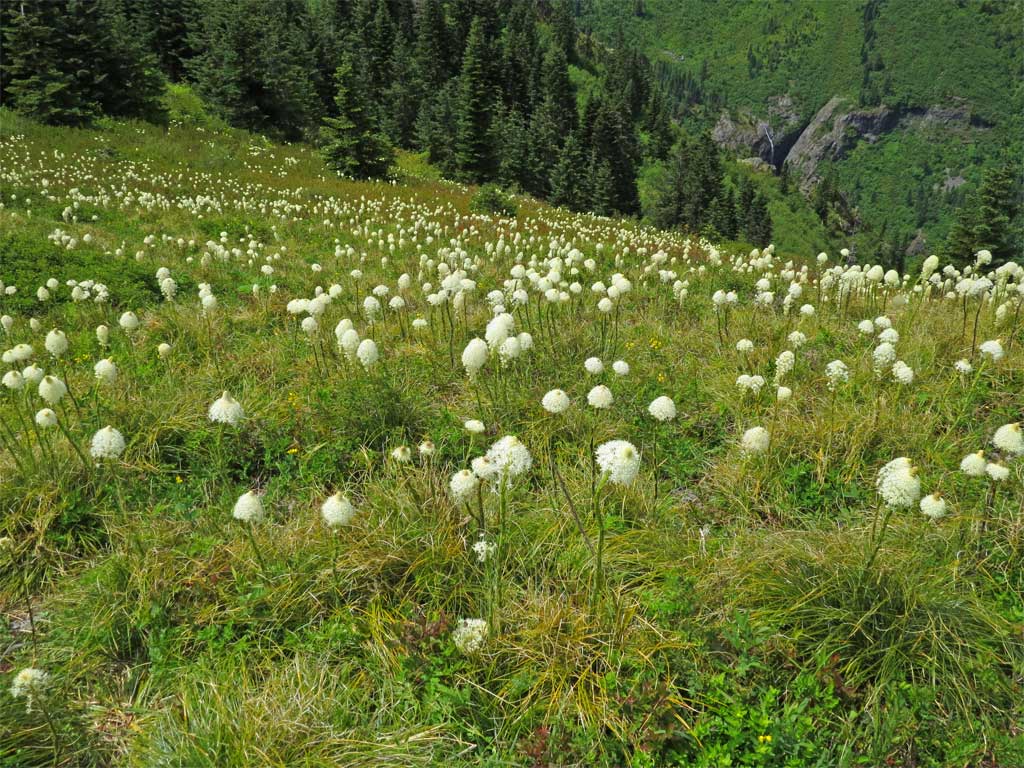 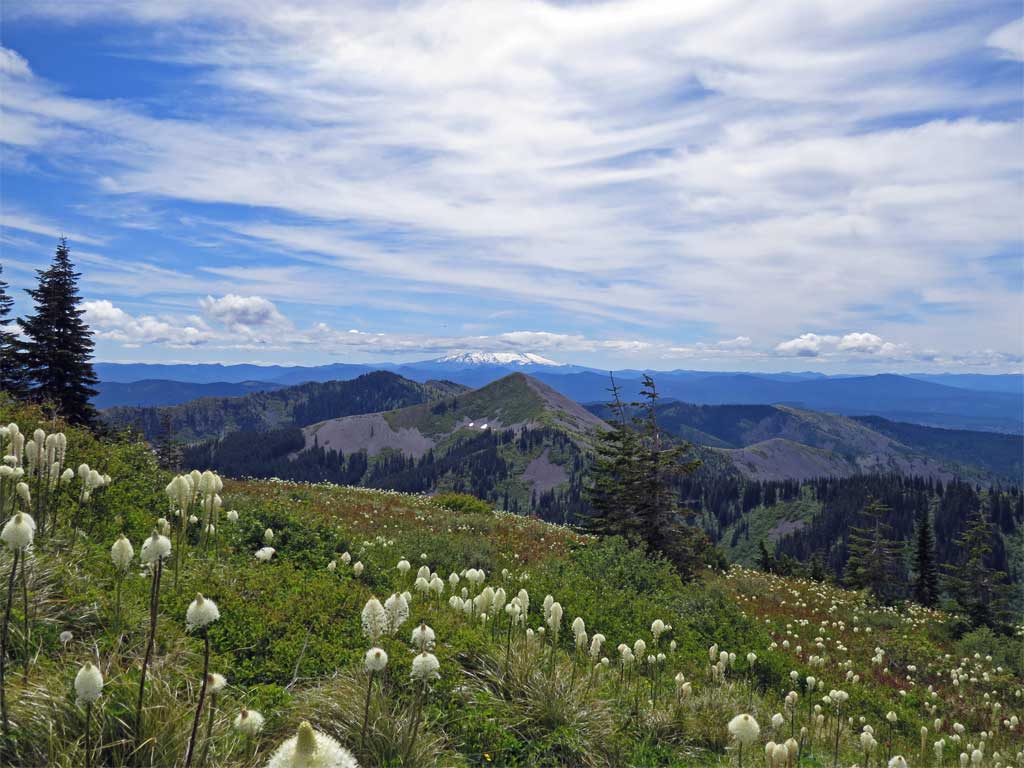 So much beargrass that the paintbrush had circled the wagons. 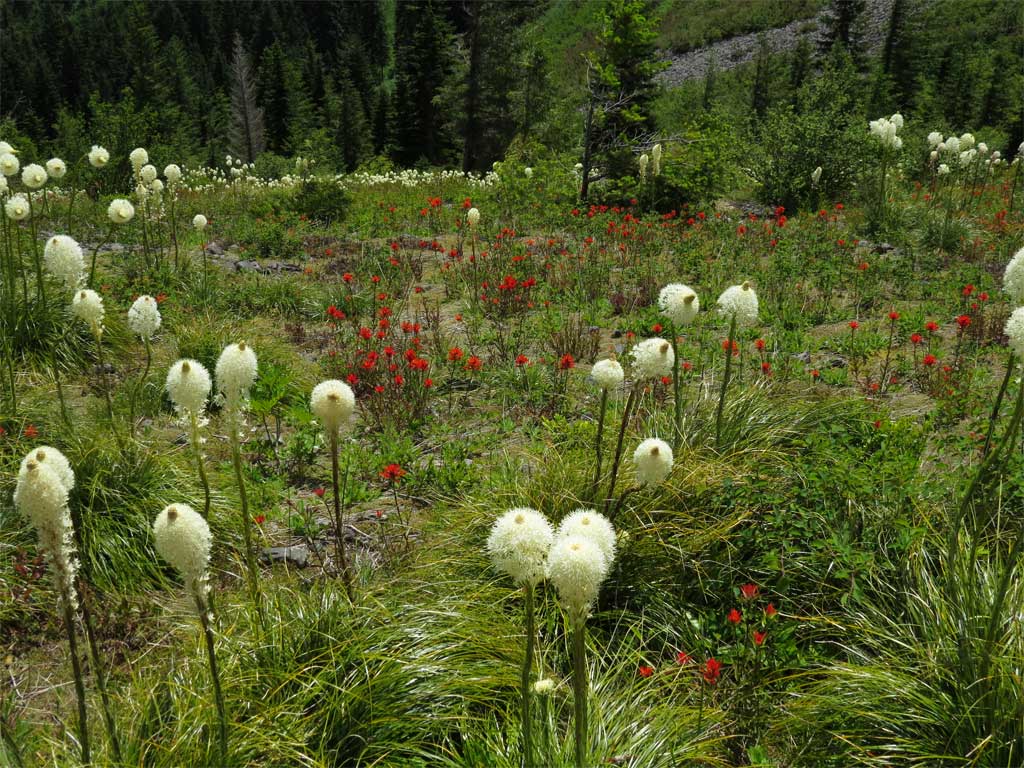 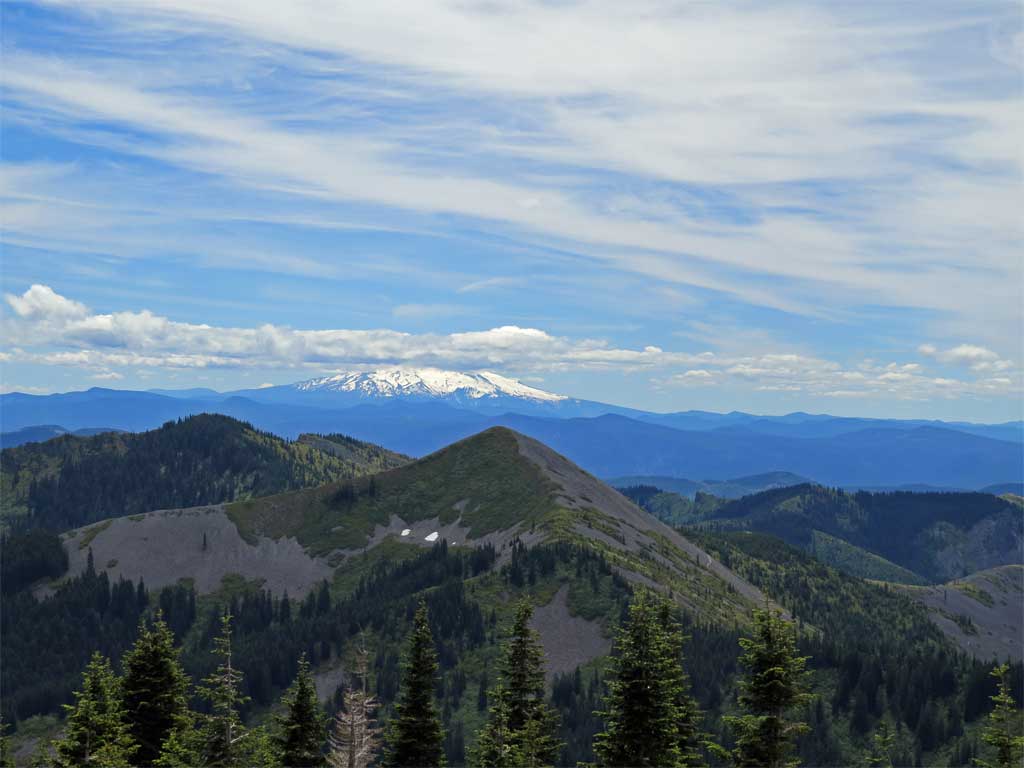 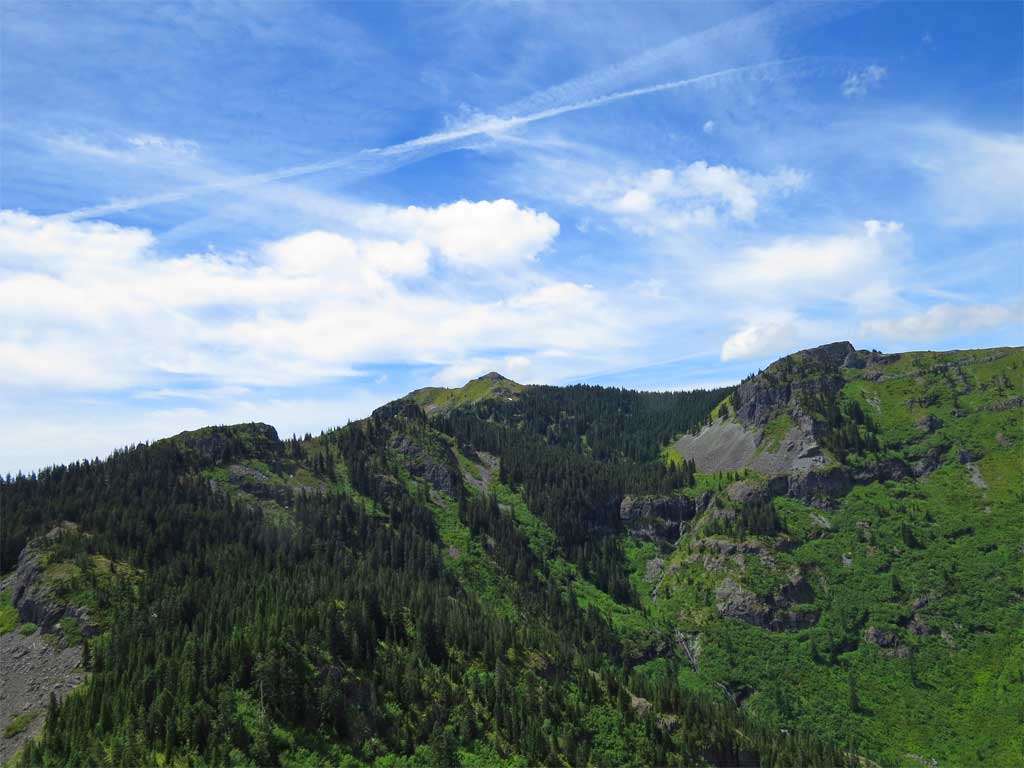 From the Starway I could see the little hill Howie the Benchmark is supposedly located: 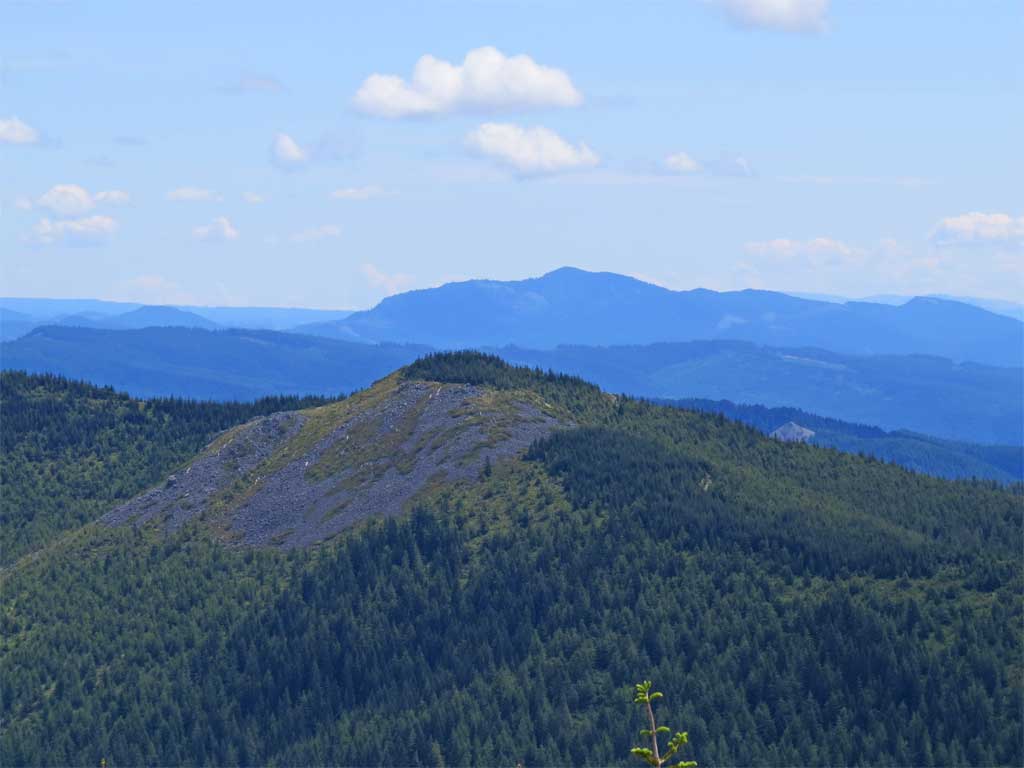 I made the Bluff Mtn Trail and considered tagging Silver Star: 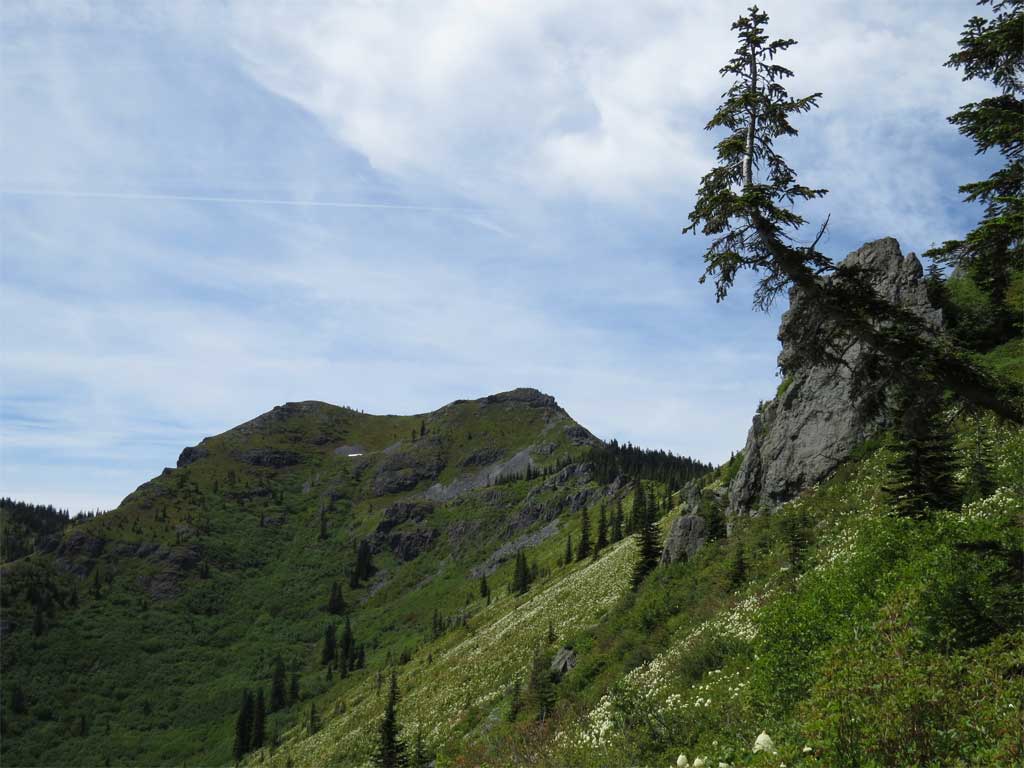 But the 50x zoom showed the summit was standing room only so I declined: 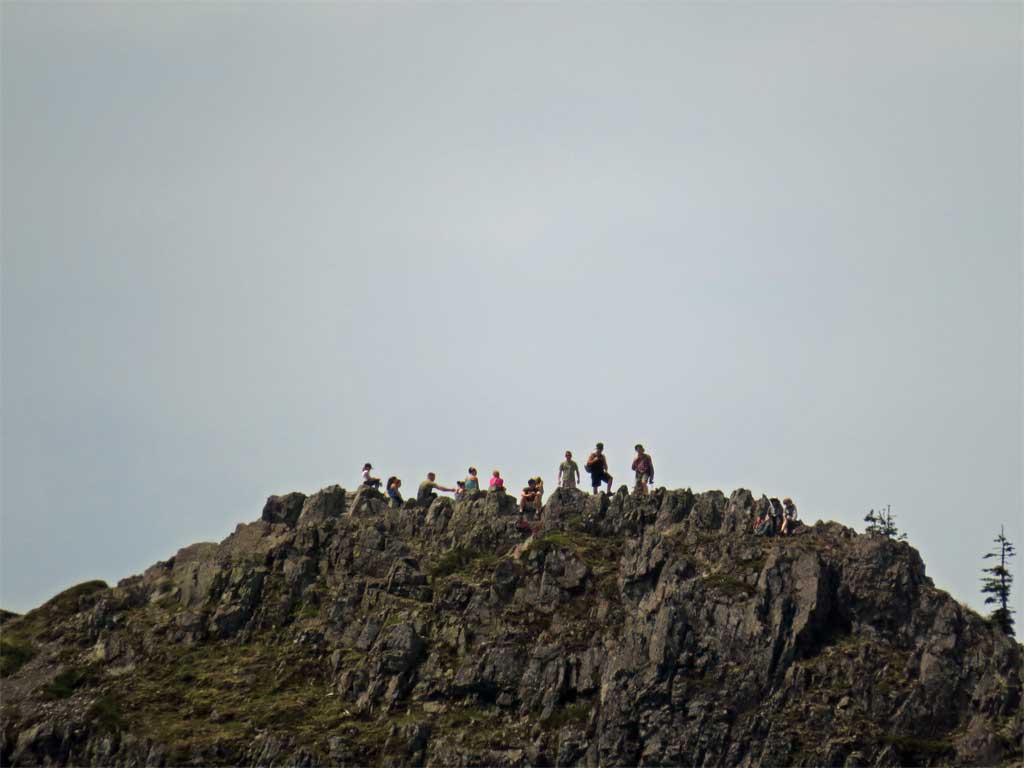 From Bluff Mtn Trail a partially obscured Mt Adams. I think the near peaks are Soda Peaks and Bare Mtn.

[edit] Bzzzzzt - wrong, the mountain is St Helens and the foreground peaks are the Tatoosh Hills. [end edit] 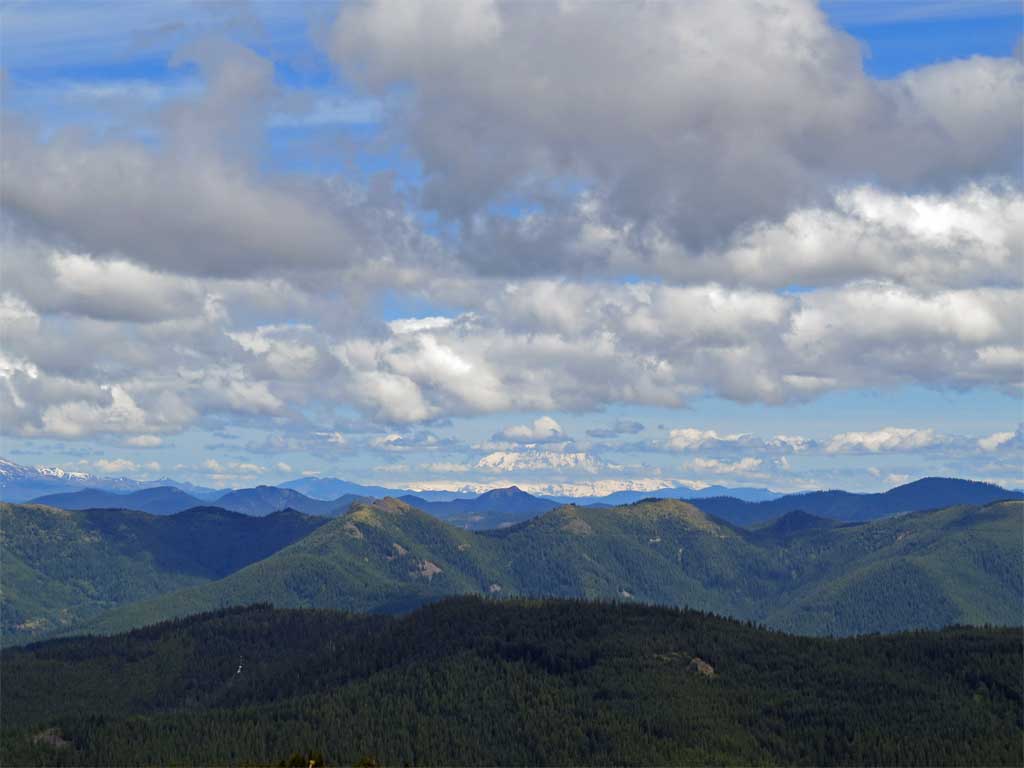 On the way to Howie the Bluff Mtn trail was a thing of beauty with a parade of flowers most of the way. 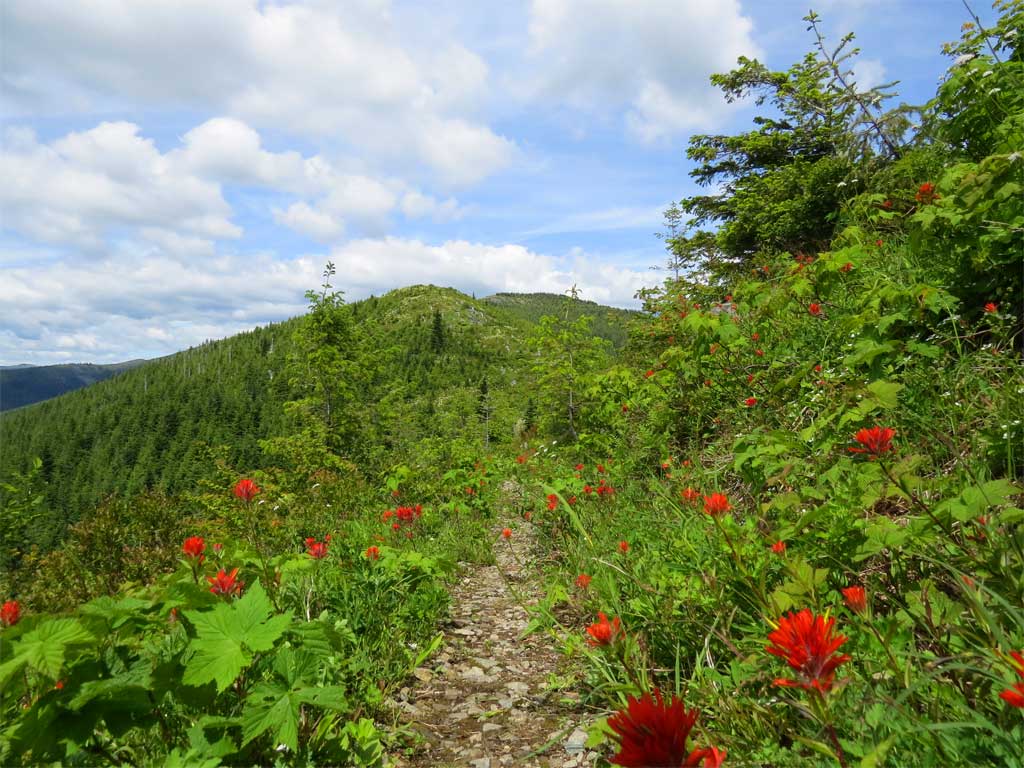 I made it to Howie but I was crushed to find no named Howie benchmark but some crusty old DNR thing, very disappointed. Maybe Howie is there but hiding in some brush. 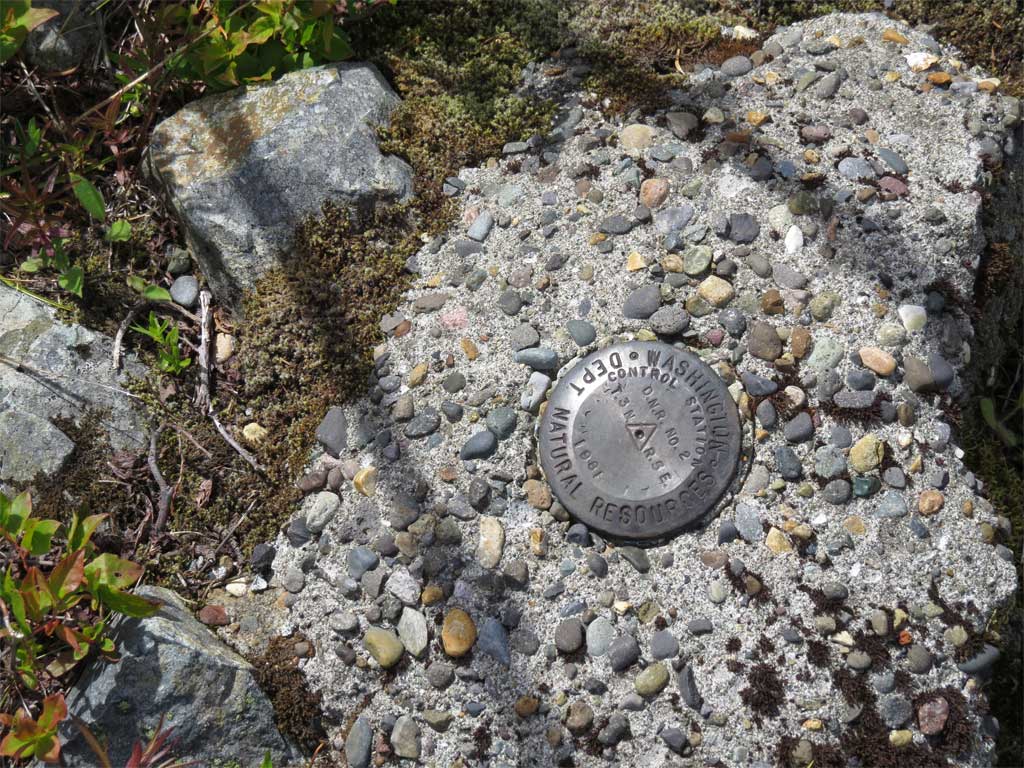 Once past Howie, next up was the 505 Trl or whatever. I did not expect much here and had pretty much resigned myself to walking back on the 41 road to the Starway's trail head. But I was pleasantly surprised to find very nice forest road. Bermed at the beginning but the 4x4 folks have done a route around - but still I saw no evidence that this road is used much even though it is in great shape. And it is a road, not a trail. Easy to follow all the way down to the connection with the road along Miners Creek. The only problem is an unbridged crossing of Copper Creek which never gets too big - mid-spring might require a ford. I rock hopped across with dry feet and then headed back down the road to the trail head. 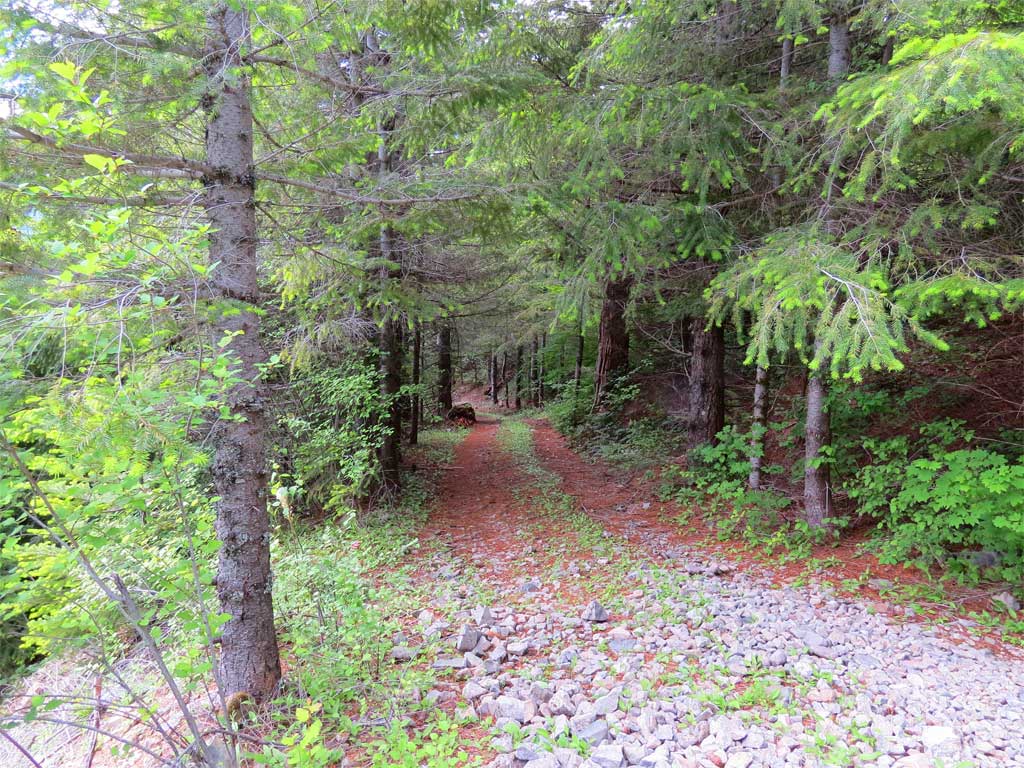 On the way down some nice views: 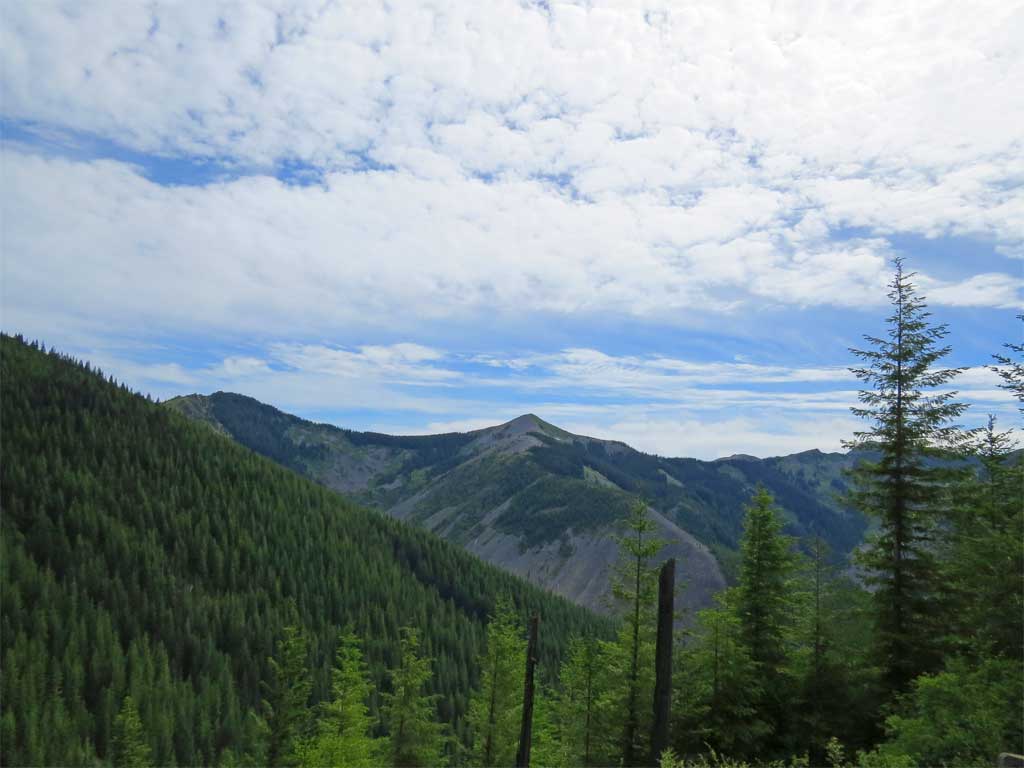 Further down you get moss rather than rock to walk on. 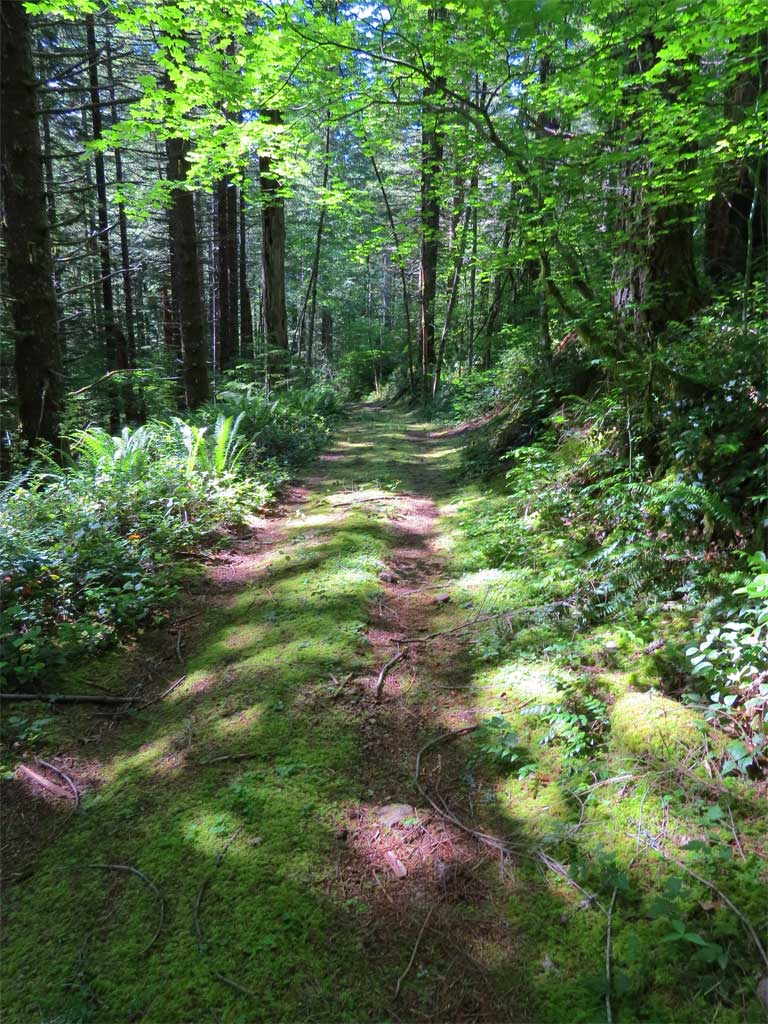 [minor edits for spelling and grammar]
Last edited by pablo on June 28th, 2013, 8:18 pm, edited 1 time in total.
The future's uncertain and the end is always near.
Top

Geez, I forgot the map which is needed for Howie and the 505 Trl references to make sense, anyway, here it is, click on the image for the big print version: 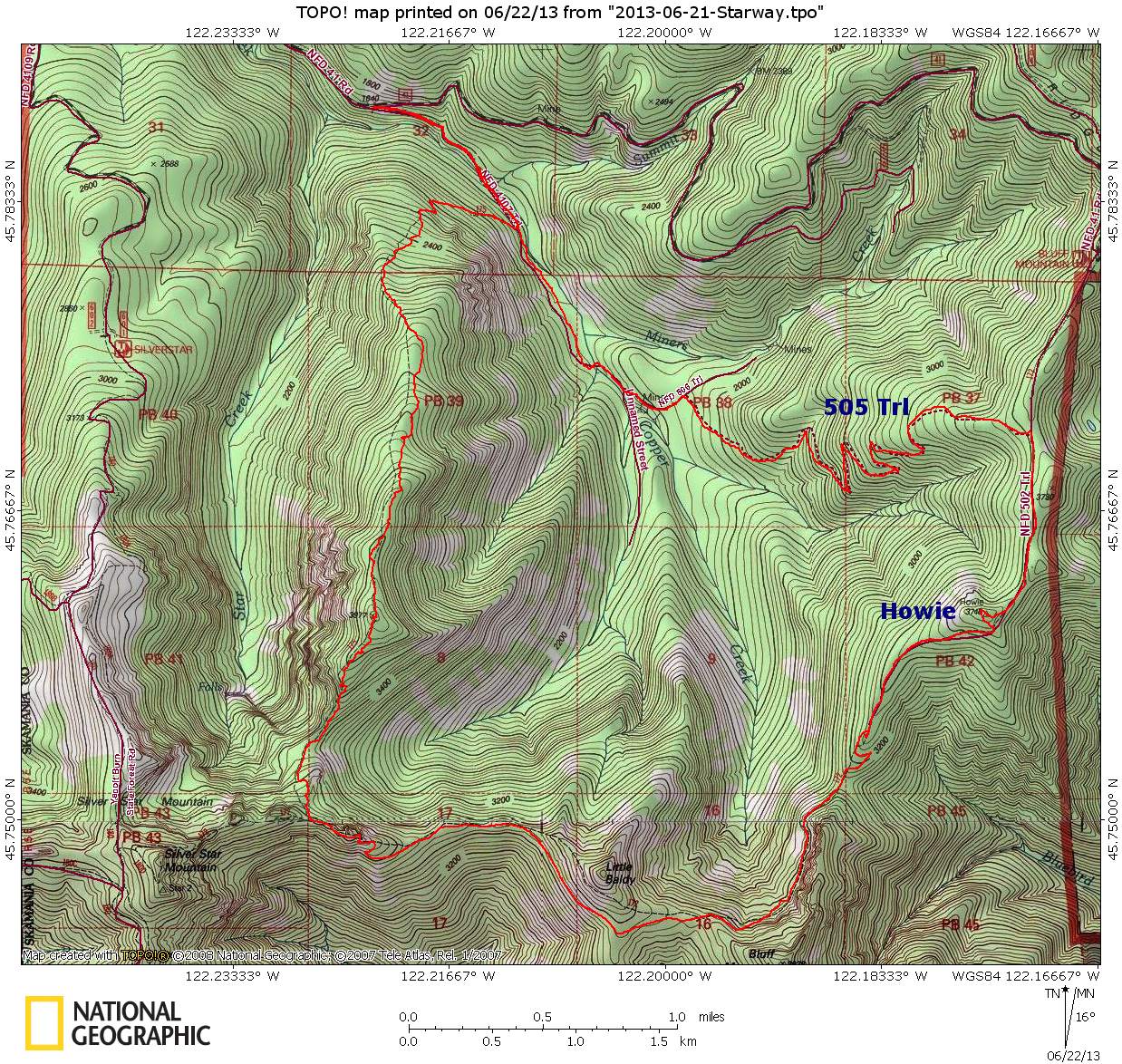 The future's uncertain and the end is always near.
Top

Great report, much appreciated! I've been wanting to do that loop for some time, as those are almost the only approaches to Silver Star I haven't taken. This is definitely very high on my short list now.

Thanks!
Karl
Back on the trail, again...
Top

But the 50x zoom showed the summit was standing room only so I declined:

Great TR but i got a kick out of these two photos. That 50X is a seriously good tool to have. Bammm in your face from miles away

Great report and pics. I've wondered about that junction both from the bottom and from the top but never took the time to explore it. Thanks for the great info.

I thought I'd take a look at the old maps to see just how old those roads were and found something interesting.

On the 1986 map, the route you took is there but on the 1953 map, it is not except for some of the lower portion leading to a mine, and the notation "tunnels". Hmmm. should be interesting if still there and not an active mining claim:

Going farther back, I looked at the 1939 map and what do you know - a trail, on the opposite side of the creek from the road you were on and leading up to Bluff Mt. I have noticed an overgrown apparent trail leading off to the north on the north slope of Bluff Mountain in just about in the right place of where this trail would meet the current trail. Might be worth a trip.

don
"Everything works in the planning stage".
Top

Thanks for the very interesting & informative TR. This loop has been high on my (ever growing) to do list ever since I sketched it out from maps and aerial photos. Now that our move is finally over, I'm once again free to put this hike at the top of the list. I'll probably do it counterclockwise and include the summit (crowds permitting).
Top

In my experience, the "named" benchmarks on USGS maps often don't have the names on the actual pieces of metal. The disc you found may well have been the elusive Howie.

Speaking of which, check out this benchmark (on Kaua'i)... I think they should ALL have a bench next to them.

Don Nelsen wrote:On the 1986 map, the route you took is there but on the 1953 map, it is not except for some of the lower portion leading to a mine, and the notation "tunnels". Hmmm. should be interesting if still there and not an active mining claim:

Don - According to two campers/hunters Ben and I spoke with Friday at the Starway TH, there are still some characters mining around there. So it may be an active mining claim! There are seemingly also some miners that make use of the lower portion of the Starway trail for mining purposes.
Some people are really fit at eighty; thankfully I still have many years to get into shape…
Top
Post Reply
17 posts