I first did this loop on a partly overcast day in July 2010 (Green Cyn Loop). It's a pretty nice loop but I thought it would be better on a bluebird day (plus I'd missed Kinzel Lk that time). The trail starts immediately across the road from the Green Canyons campground along the Salmon River Road out of ZigZag. After some early overcast, the sun burned through and the trail was dappled in sunlight the rest of the day. 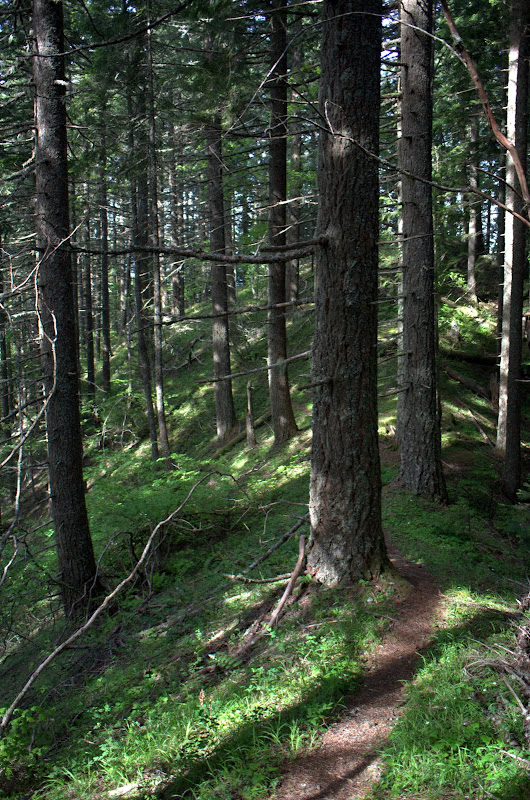 The Green Cyn trail climbs relentlessly - but with good switchbacks - to the top of Hunchback Ridge. 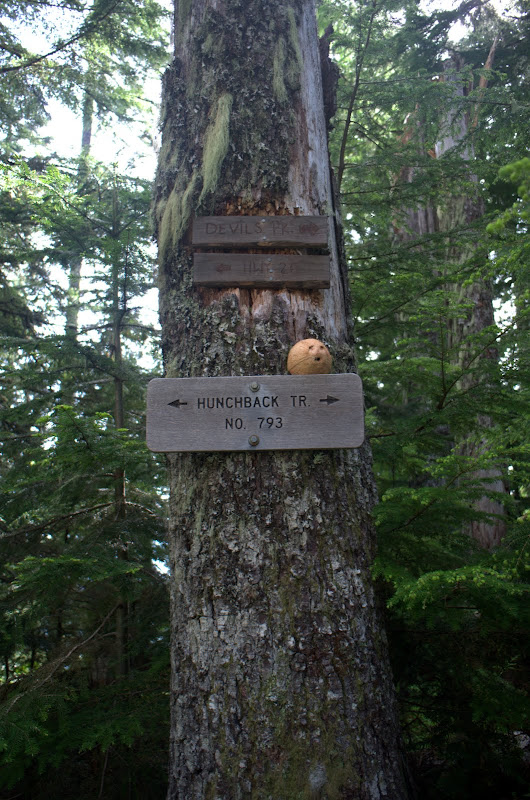 Both the Green Cyn and the Hunchback trails were in great condition - there had been some maintenance and just a few step-over blowdowns remained. 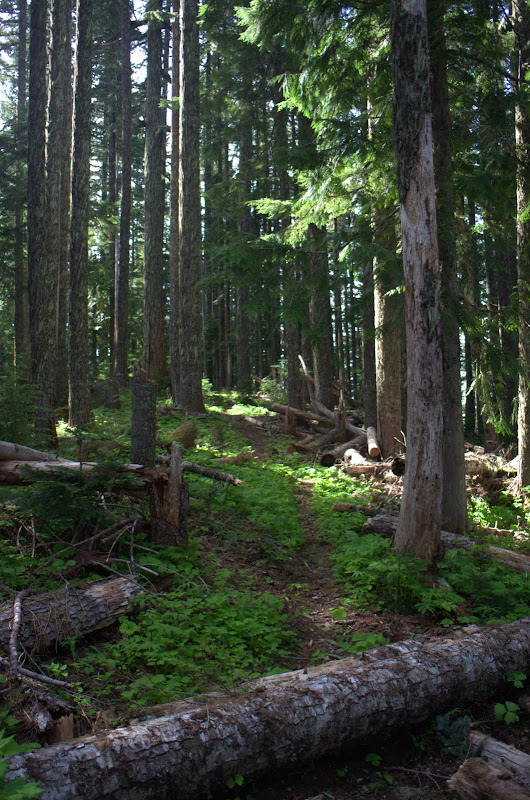 The ridge has groves of rhodies along it, which were in various stages of blossoming out. 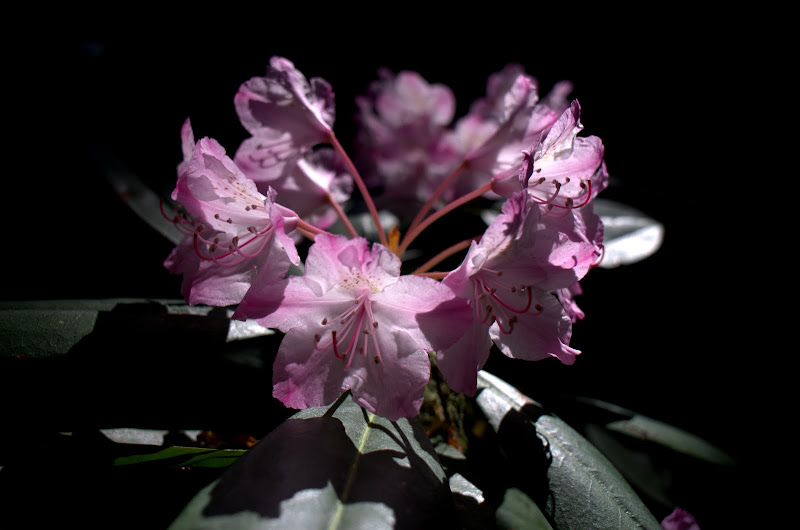 There are a couple of meadows along the ridge, which looked much better this time in full sunlight. 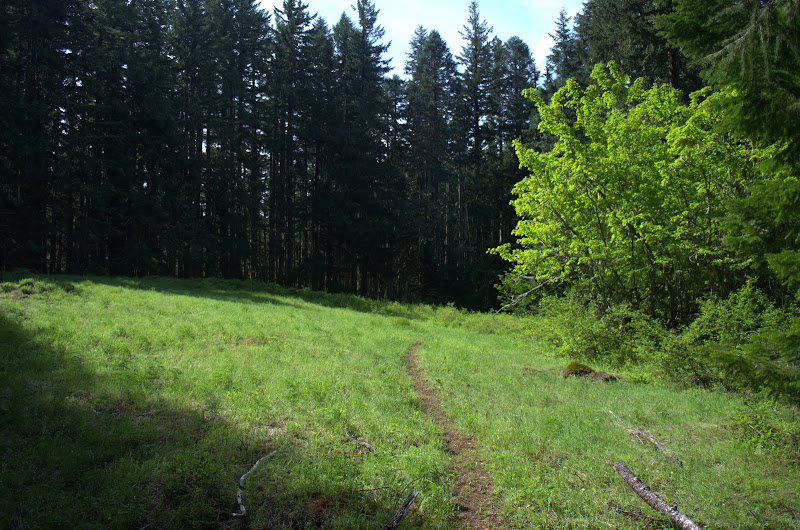 I was surprised to arrive at the lookout on Devils Peak and find only one other hiker. But Hood was fully visible, 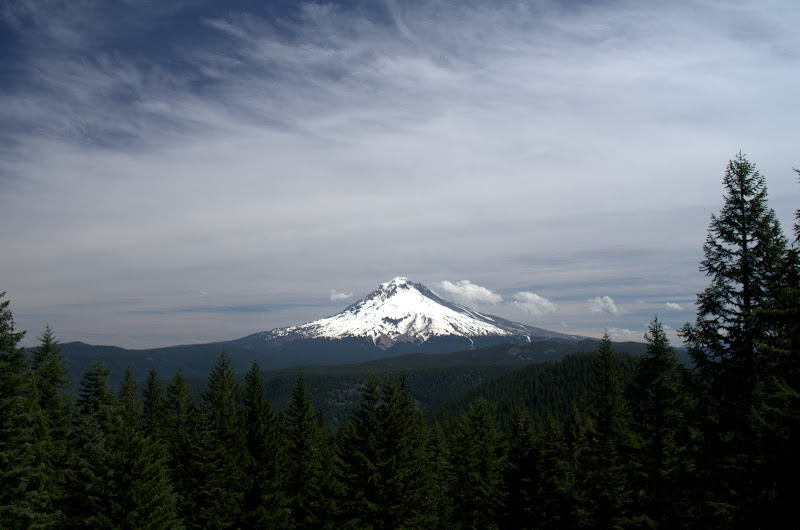 and Olallie Butte, Jefferson, and Three Finger Jack (arrow) were visible to the S. 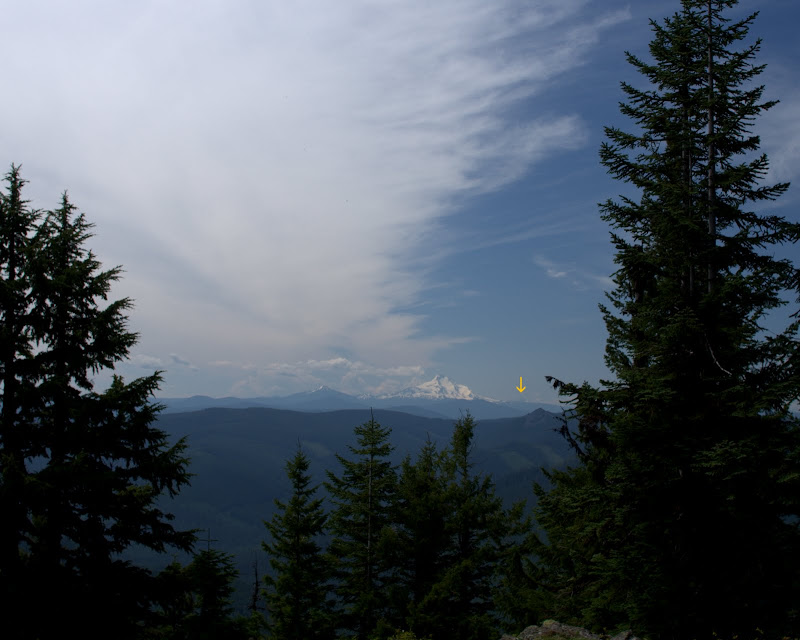 After a snack, it was down to pretty little Kinzel Lk, which I guess most people reach via a road since the trail to it is sort of an after thought. 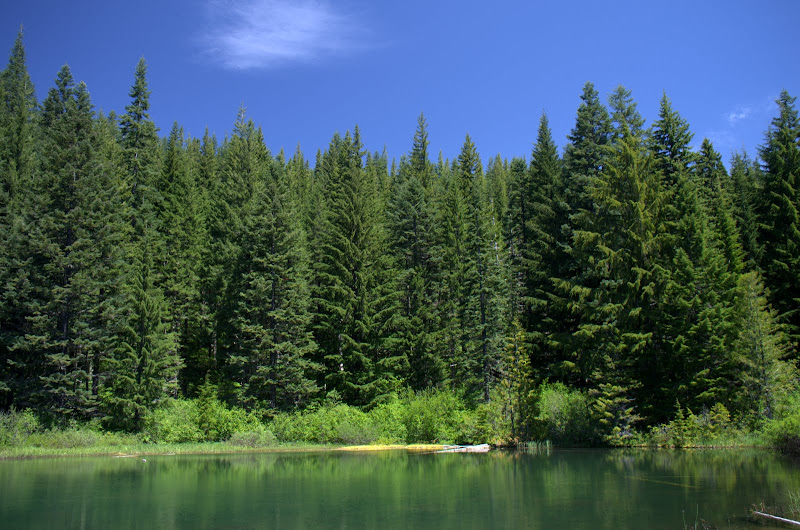 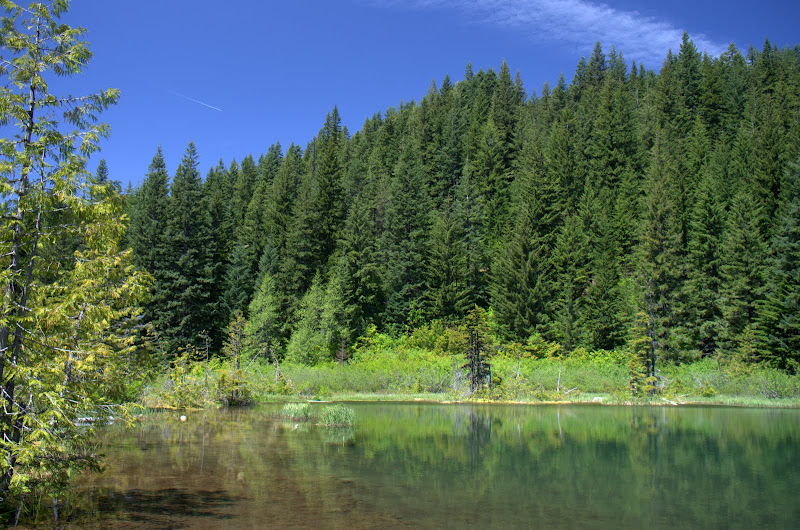 The walk back along the Salmon River trail was through more sunlight dappled forest, with warm breezes, and an occasional view. 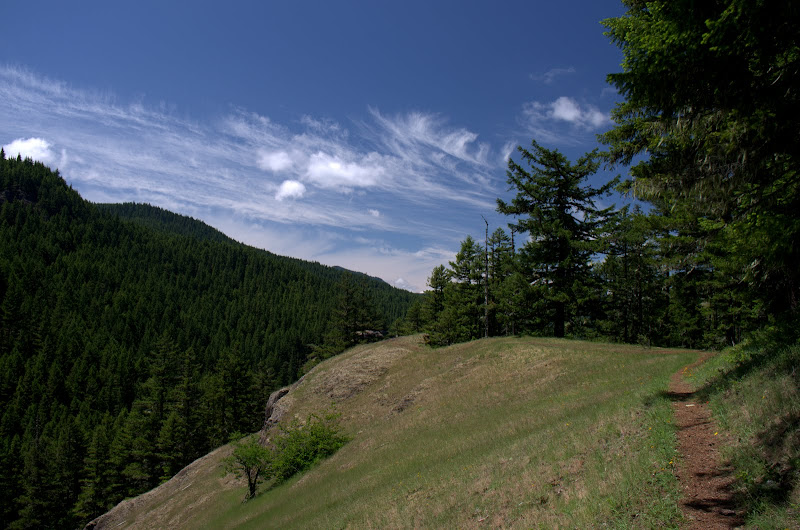 There was a rumor that T-storms were a possibility, so I kept moving. 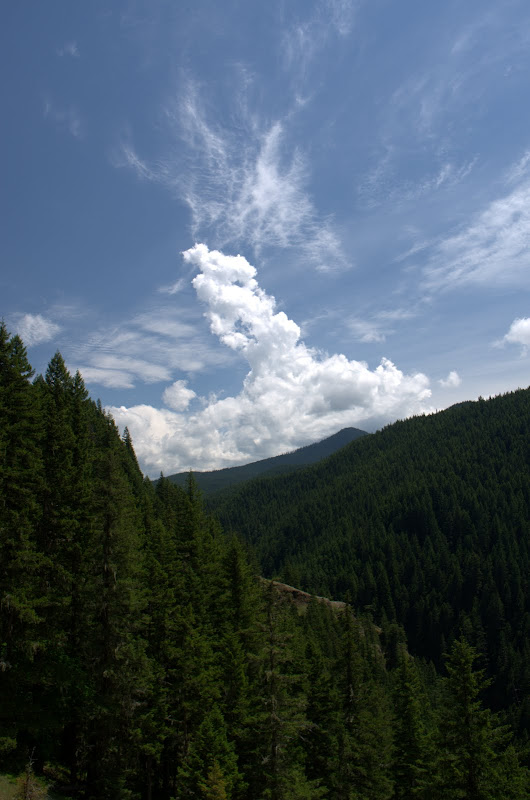 Just as the trail finally got close to the Salmon River, 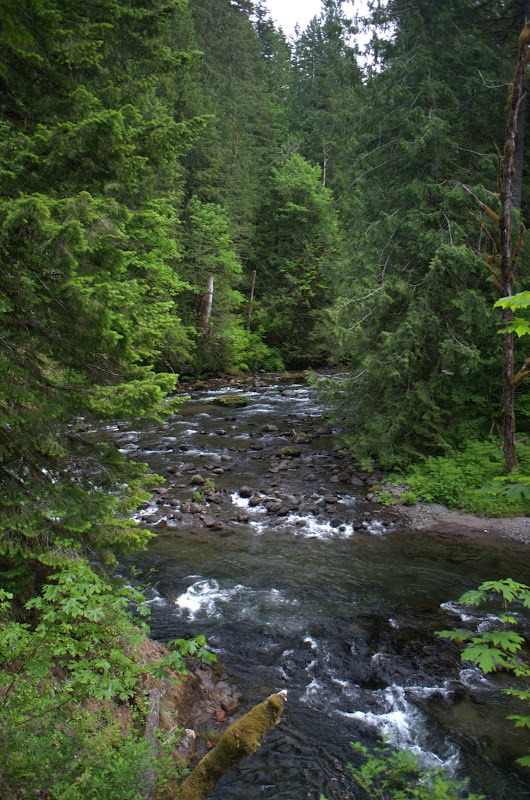 it ended and I was on the road back to the car. There were lots of cars parked along the road and the campsites looked full, but I didn't see any other hikers (save the one at the LO) more than 3 mi from the TH. Nice sunny hike (16.3 mi, 3500' EG) on good trail, with varied scenery and no crowds. 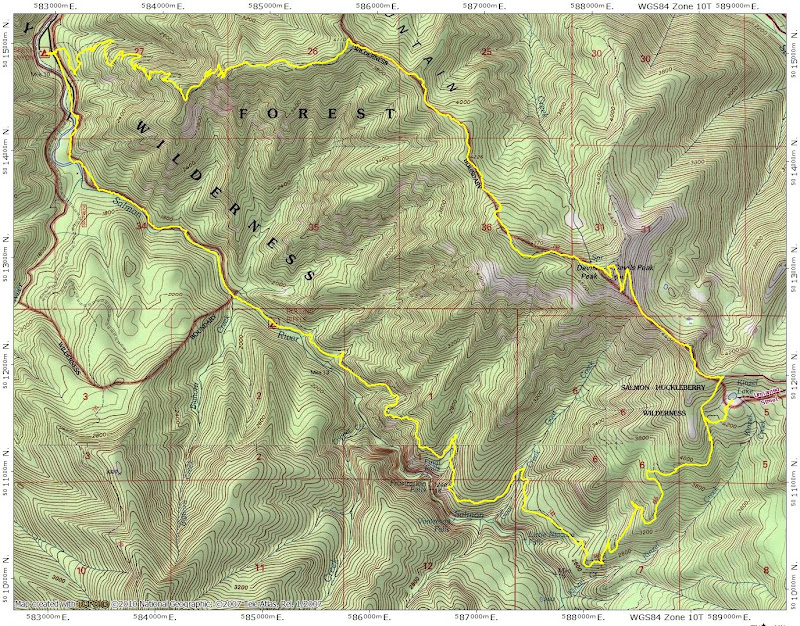 Wow! I did that same loop, just the day before! Most of the same experiences, a few more folks, but only at the stopping points. Very peaceful. Almost posted from the lookout that, "this be where the rhodies are!" Really nice displays coming and going.

Great report and photos, VM. I am glad to hear about the trails being in good condition up there and was hoping to do the same loop a little later this year.
Top

I did the same loop CCW one year ago. There was a crowd of very friendly people staying in the lookout and taking care of it. It is an enjoyable loop.
Some people are really fit at eighty; thankfully I still have many years to get into shape…
Top

It's the best hike in the Salmon-Huckleberry, in my opinion. Takes in a variety of features and you don't see many people except when you get near Devil's Peak and then down close to the Salmon River.
Top
Post Reply
5 posts • Page 1 of 1